[0001] The present invention relates generally to methods and systems for drilling in various subsurface formations such as hydrocarbon containing formations.

[0002] Hydrocarbons obtained from subterranean formations are often used as energy resources, as feedstocks, and as consumer products. Concerns over depletion of available hydrocarbon resources and concerns over declining overall quality of produced hydrocarbons have led to development of processes for more efficient recovery, processing and/or use of available hydrocarbon resources.
[0003] In drilling operations, drilling personnel are commonly assigned various monitoring and control functions. For example, drilling personnel may control or monitor positions of drilling apparatus (such as a rotary drive or carriage drive), collect samples of drilling fluid, and monitor shakers. As another example, drilling personnel adjust the drilling system ("wiggle" a drill string) on a case-by-case basis to adjust or correct drilling rate, trajectory, or stability. A driller may control drilling parameters using joysticks, manual switches, or other manually operated devices, and monitor drilling conditions using gauges, meters, dials, fluid samples, or audible alarms. The need for manual control and monitoring may increase costs of drilling of a formation. In addition, some of the operations performed by the driller may be based on subtle cues from drilling apparatus (such as unexpected vibration of a drilling string). Because different drilling personnel have different experience, knowledge, skills, and instincts, drilling performance that relies on such manual procedures may not be repeatable from formation to formation or from rig to rig. In addition, some drilling operations (whether manual or automatic) may require that a drill bit be stopped or pulled off the bottom of the well, for example, when changing from a rotary drilling mode to a slide drilling mode. Suspension of drilling during such operations may reduce the overall rate of progress and efficiency of drilling.
[0004] Bottom hole assemblies in drilling systems often include instrumentation, such as Measurement While Drilling (MWD) tools. Data from the downhole instrumentation may be used to monitor and control drilling operations. Providing, operating, and maintaining such downhole measuring tools may substantially increase the cost of a drilling system. In addition, since data from downhole instrumentation must be transmitted to the surface (such as by mud pulsing or periodic electromagnetic transmissions), the downhole instrumentation may provide only limited "snapshots" at periodic intervals during the drilling process. For example, a driller may have to wait 20 or more seconds between updates from a MWD tool. During the gaps between updates, the information from the downhole instrumentation may become stale and lose its value for controlling drilling. US 2007/056772 A1 describes methods and systems for controlling movement of a bit of a drilling assembly during reaming of an already-drilled hole; the methods, in certain aspects, including determining a ream speed for downward movement of the bit in the hole, moving the bit downward in a hole at said ream speed, determining a time period for deceleration of the bit to the hole bottom, determining a value for a target drilling parameter for drilling beyond the bottom of the hole, decelerating the bit (linearly or non-linearly) for the time period, and achieving the value for the target drilling parameter when the bit reaches the bottom of the hole.

[0024] Advantages of the present invention may become apparent to those skilled in the art with the benefit of the following detailed description and upon reference to the accompanying drawings in which:

FIG. 1 and 1A illustrate a schematic diagram of a drilling system with a control system for performing drilling operations automatically according to one embodiment;

FIG. 1B illustrates one embodiment of bottom hole assembly including a bent sub;

FIG. 2 is a schematic illustrating one embodiment of a control system;

FIG. 3 illustrates a flow chart for a method of assessing a relationship between motor output torque and differential pressure across the mud motor according to one embodiment;

FIG. 4 illustrates one embodiment of torque measured on a drill string at the surface of a formation against time during a test to determine a torque/differential pressure relationship at a transition from rotary drilling to slide drilling;

FIG. 5 is a plot of mud motor output torque against differential pressure across the motor according to one embodiment;

FIG. 6 illustrates a flow chart for a method of assessing weight on a drill bit using differential pressure according to one embodiment;

FIG. 8 illustrates a flow chart for a method of assessing a relationship of weight on bit that includes a determination of weight on bit induced side load torque using measurements of surface torque and differential pressure;

FIG. 8A illustrates a graph of rotary drilling showing measured and calculated torques over time;

FIG. 9 illustrates a relationship between differential pressure and viscosity in a pipe;

FIG. 10 illustrates a flow chart for a method of detecting a stall in a mud motor and recovering from the stall according to one embodiment;

FIG. 11 illustrates a flow chart for a method of determining hole cleaning effectiveness;

FIG. 12 illustrates toolface synchronization using measurement while drilling data according to one embodiment;

FIG. 13 illustrates a flow chart for a method of a transition of a drilling system from rotary drilling to slide drilling;

FIG. 14 is a plot over time illustrating tuning in a transition from rotary drilling to slide drilling with surface adjustments at intervals;

FIG. 15 illustrates a flow chart for a method of a transition from rotary drilling to slide drilling including carriage movement according to one embodiment;

FIG. 16 illustrates a flow chart for a method of an embodiment of drilling in which the speed of rotation of the drill string is varied during the rotation cycle;

FIG. 17 illustrates a diagram of a multiple speed rotation cycle according to one embodiment;

FIG. 18 illustrates a drill string in a borehole for which a virtual continuous survey may be assessed;

FIG. 18A depicts a diagram illustrating an example of slide drilling between MWD surveys.

FIG. 18B is tabulation of the original survey points for one example of drilling in rotary drilling and slide drilling modes;

FIG. 19 illustrates an example of pressure recording during adding of a joint lateral according to one embodiment;

FIG. 21 illustrates is a graphical representation illustrating a method of performing a project to bit;

FIG. 22 is a diagram illustrating one embodiment of a plan for a hole and a portion of the hole that has been drilled based on the plan;

FIG. 23 illustrates one embodiment of a method of generating steering commands;

[0107] The wellbore column of fluid may be independent of the surface system. Powder products or liquid additives transferred into the active system (if there are any such products or additives) may not have any bearing on the mass balance of fluid being circulated though the well in real time. The excavated drilled cuttings may thus be the only "additive" to the column of fluid. An exception to the assumption that drilled cuttings are the only additive would be if there is an influx of water from the formation. In some embodiments, water influx is determined by monitoring for any unexpected decrease in rheological properties measured from an inline viscometer. In other embodiments, totalizing of the volumes in versus volume out can indicate fluid influxes. The HCI may be adjusted based on any such decrease to account for the water influx.
[0108] In one embodiment, a Coriolis meter has a preset calibration schedule. The Coriolis meter may have built-in hi/low level alarms to confirm that accurate data is being received. In one example, a 6" Coriolis meter has two flow tubes, each having a diameter at 3.5" (88.9 mm). In one embodiment, the Coriolois meter controls the material flow to an accuracy of ± 0.5 percent of the preset flow rate.
[0109] The use of automatic monitoring of cleaning effectiveness may eliminate or reduce a need for human monitoring of operations, such as monitoring of the shakers. For example, personnel may not be required at the shakers to measure viscosity and mud weight a periodic intervals. As another example, a mud engineer may not need to catch mud sample at periodic intervals.
[0110] Examples of mass balance monitoring are given below:

[0111] A suction meter and a flowline meter are read and assessed for balance. (There may be a slight discrepancy due to fluid temperature, in that the exiting fluid will be warmer therefore possibly slightly lighter.)

Inline fluid viscometer may measure at 600, 300, 200, 100, 6 and 3-rpm readings. The collection time may be 1 second at each rpm speed. 6 seconds to process all six readings.
A temperature correction may be made based a "look-up" table.

A washout percentage may be graphed as a separate set of data points
The lag time may be computed based on the time it takes to empty the annulus of mud calculated from the annular volume and flowrate (a "bottoms up" time) Cuttings shape, size, fluid slip velocity, horizontal vs vertical drilling may be assessed

1. A method of automatically placing a drill bit (134) used to form an opening in a subsurface formation (102) on a bottom of the opening being formed, comprising:

a) increasing a flow rate in a drill string (110) to a target flow; 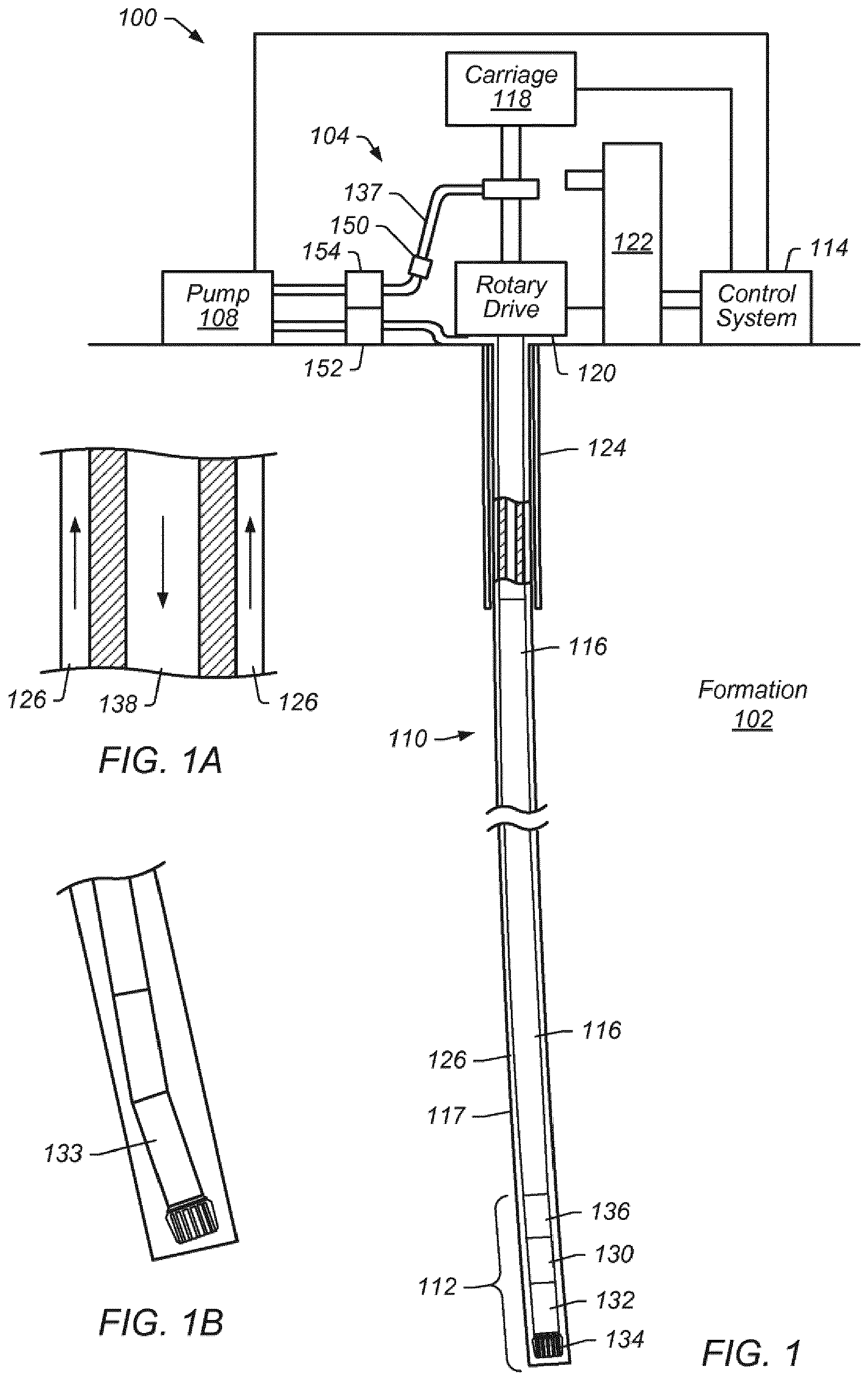 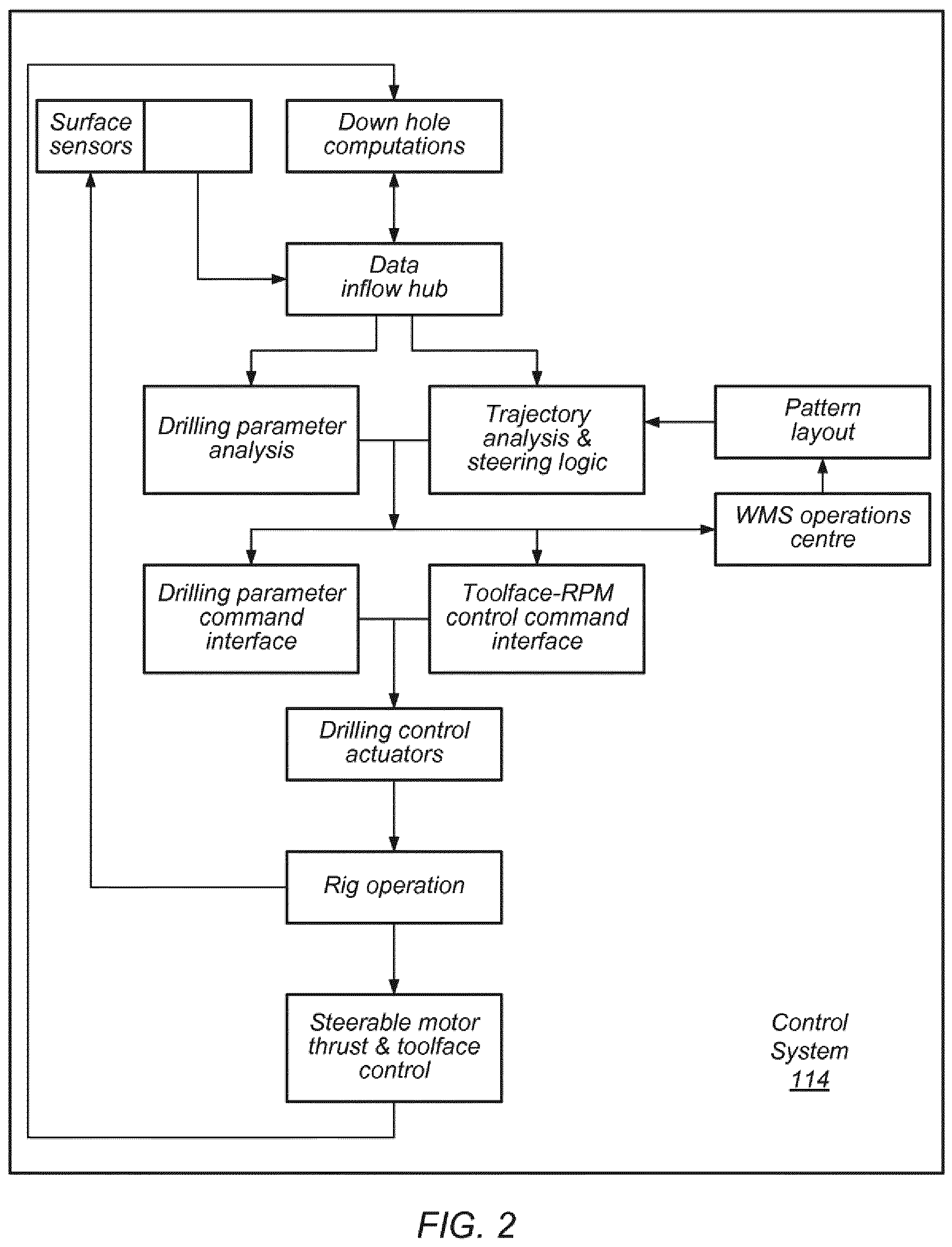 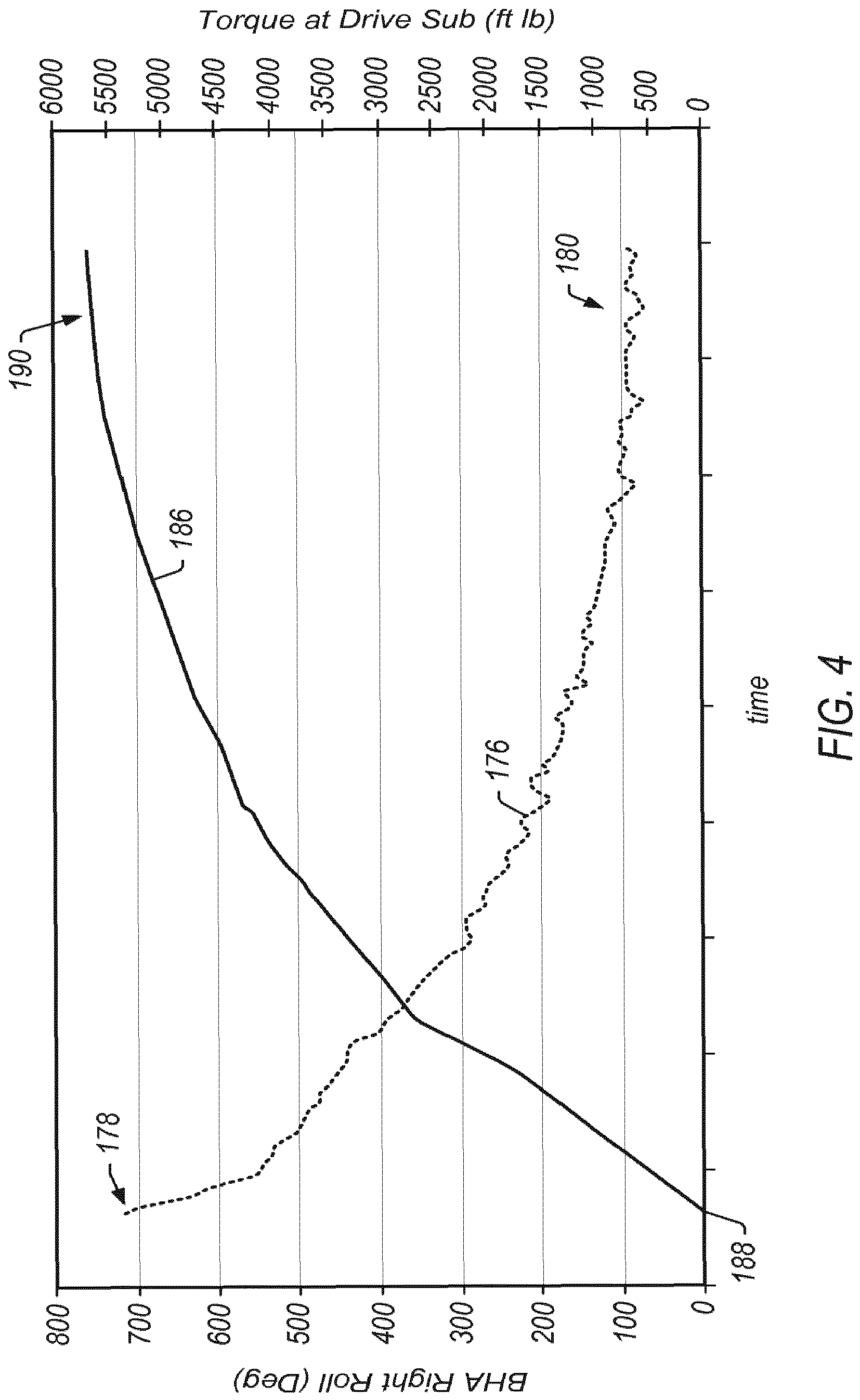 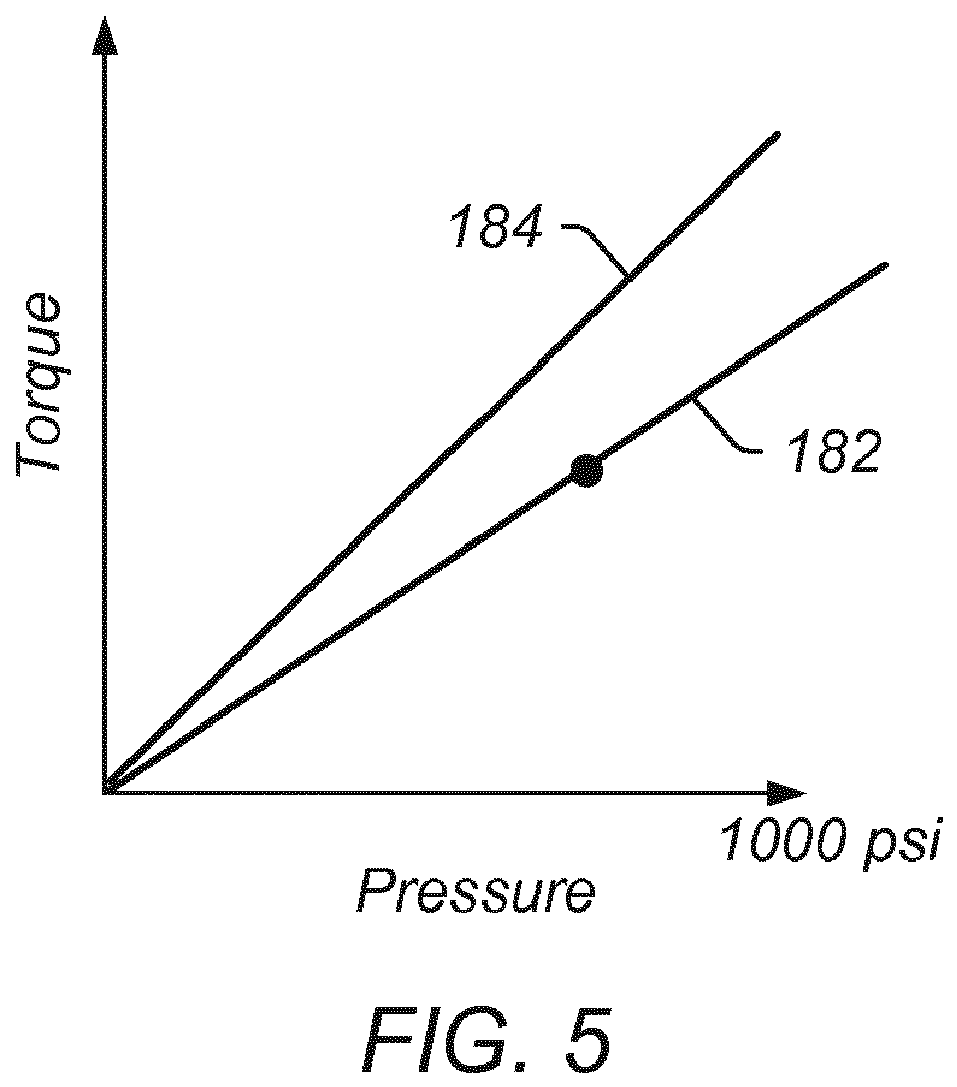 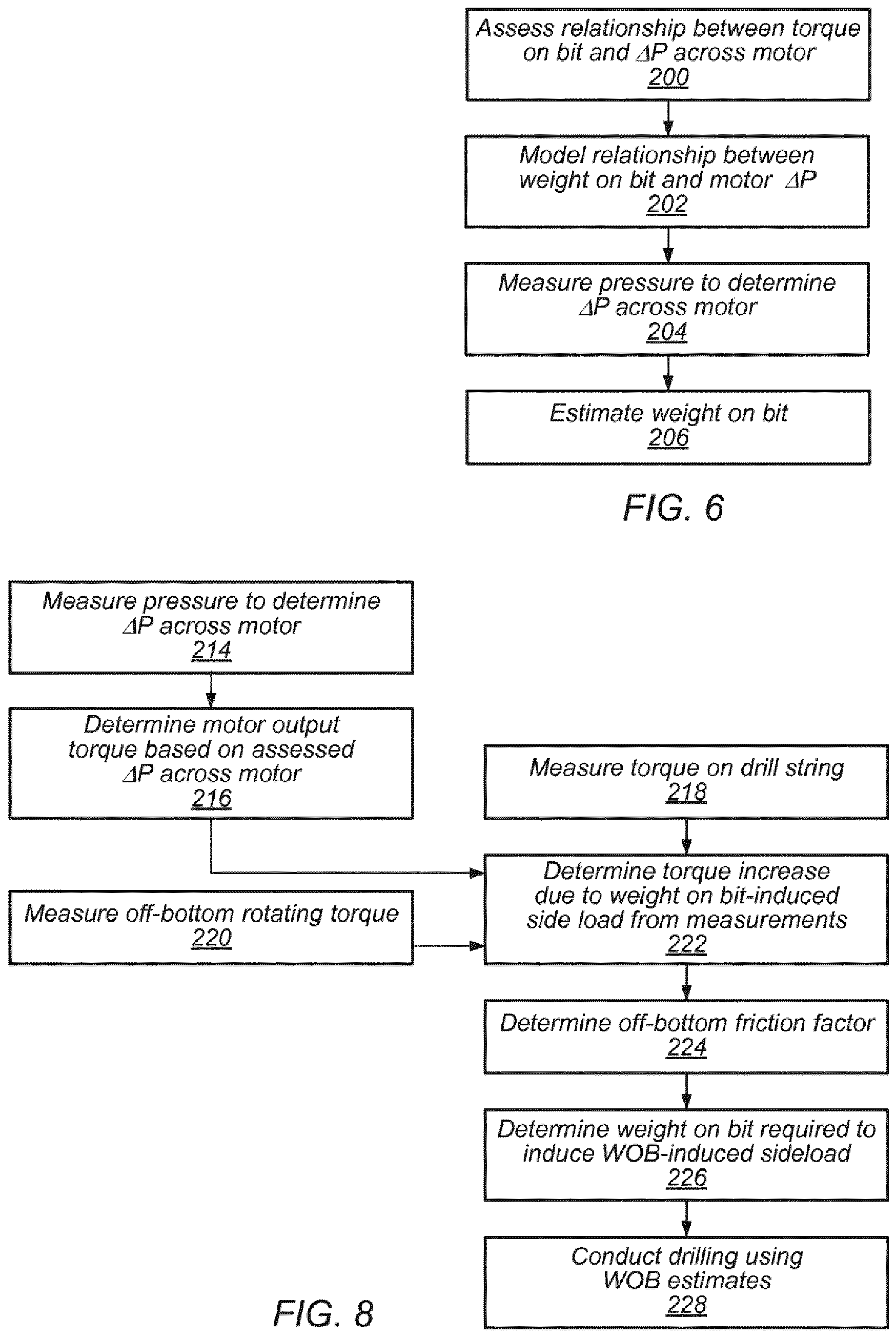 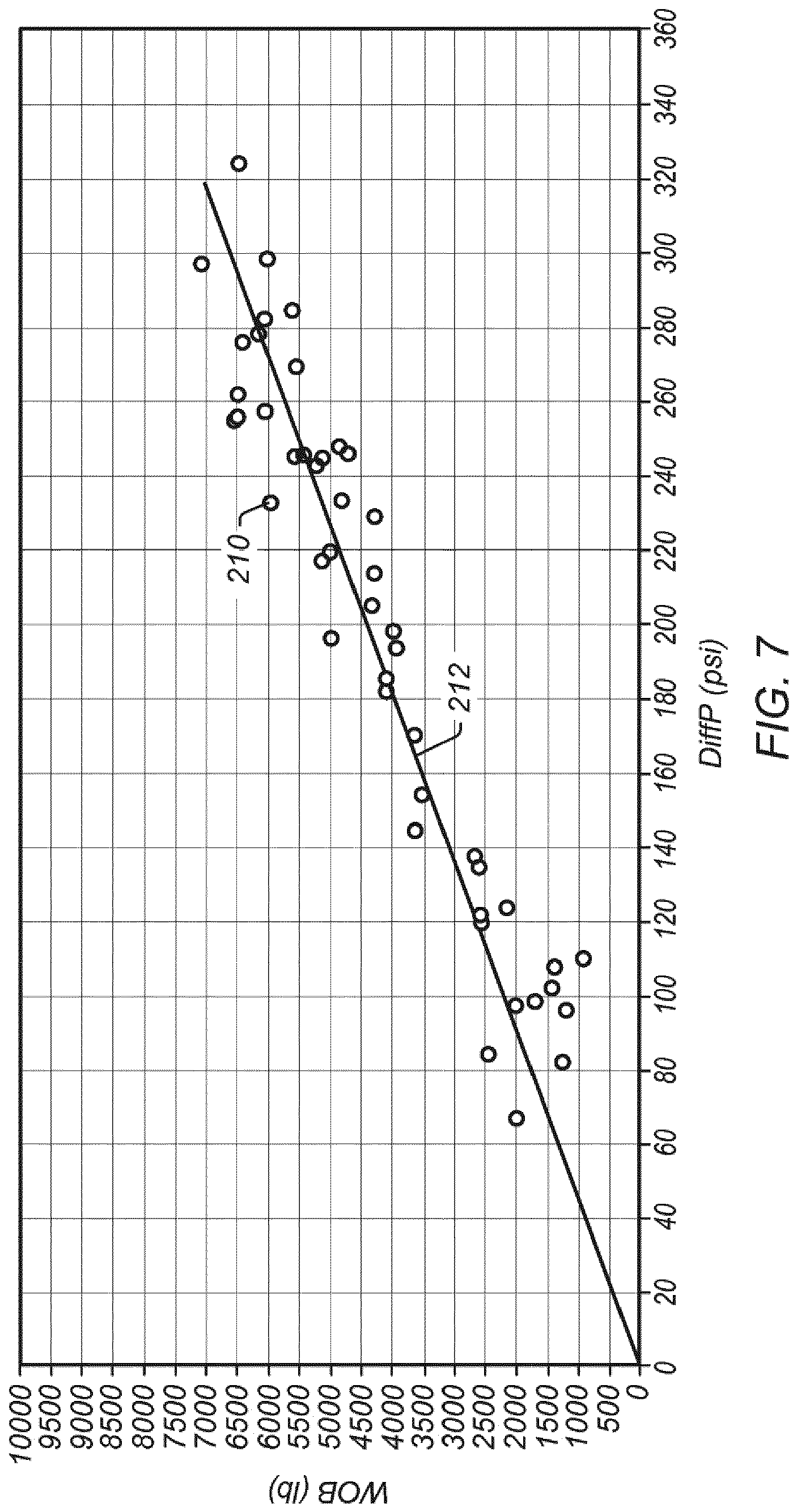 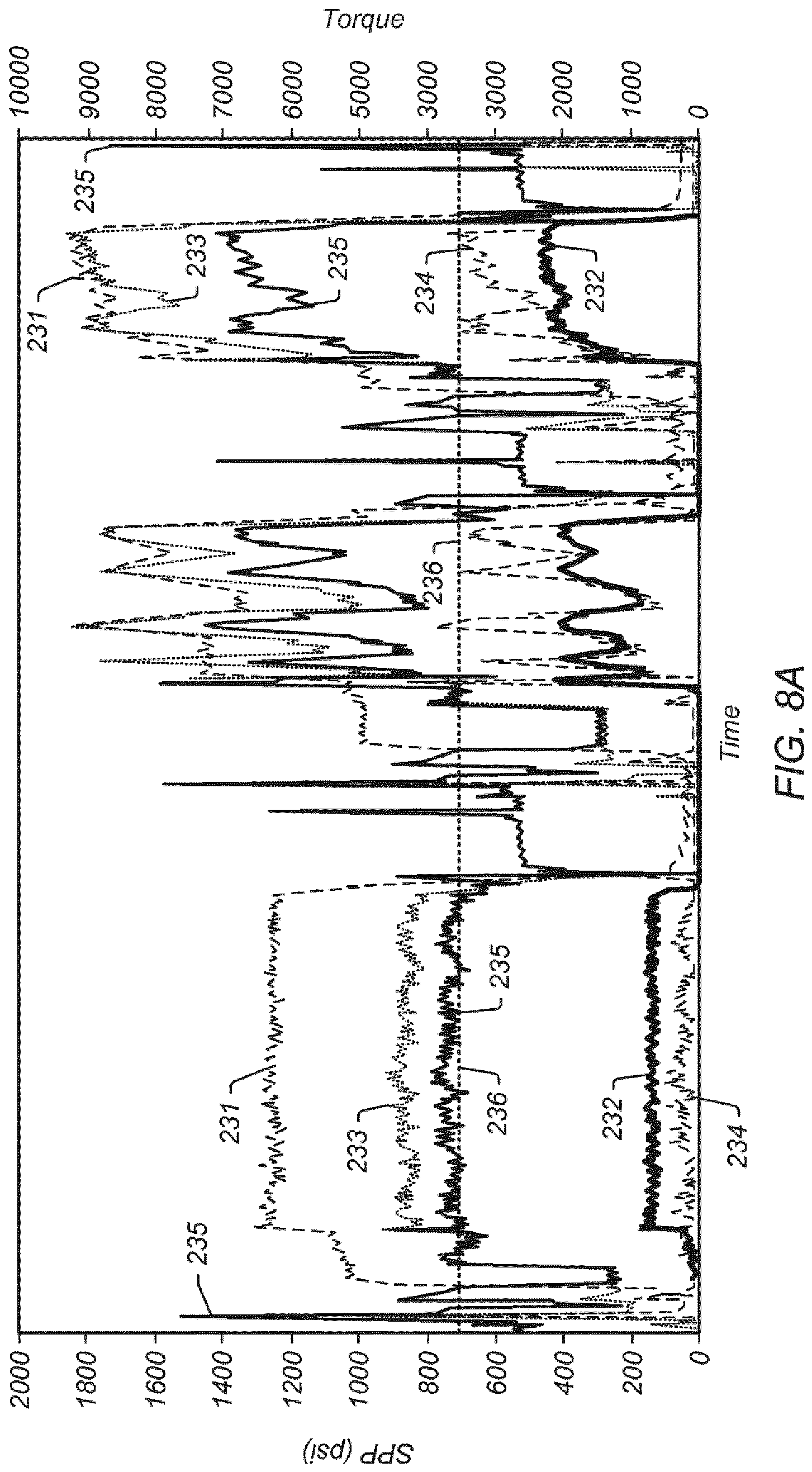 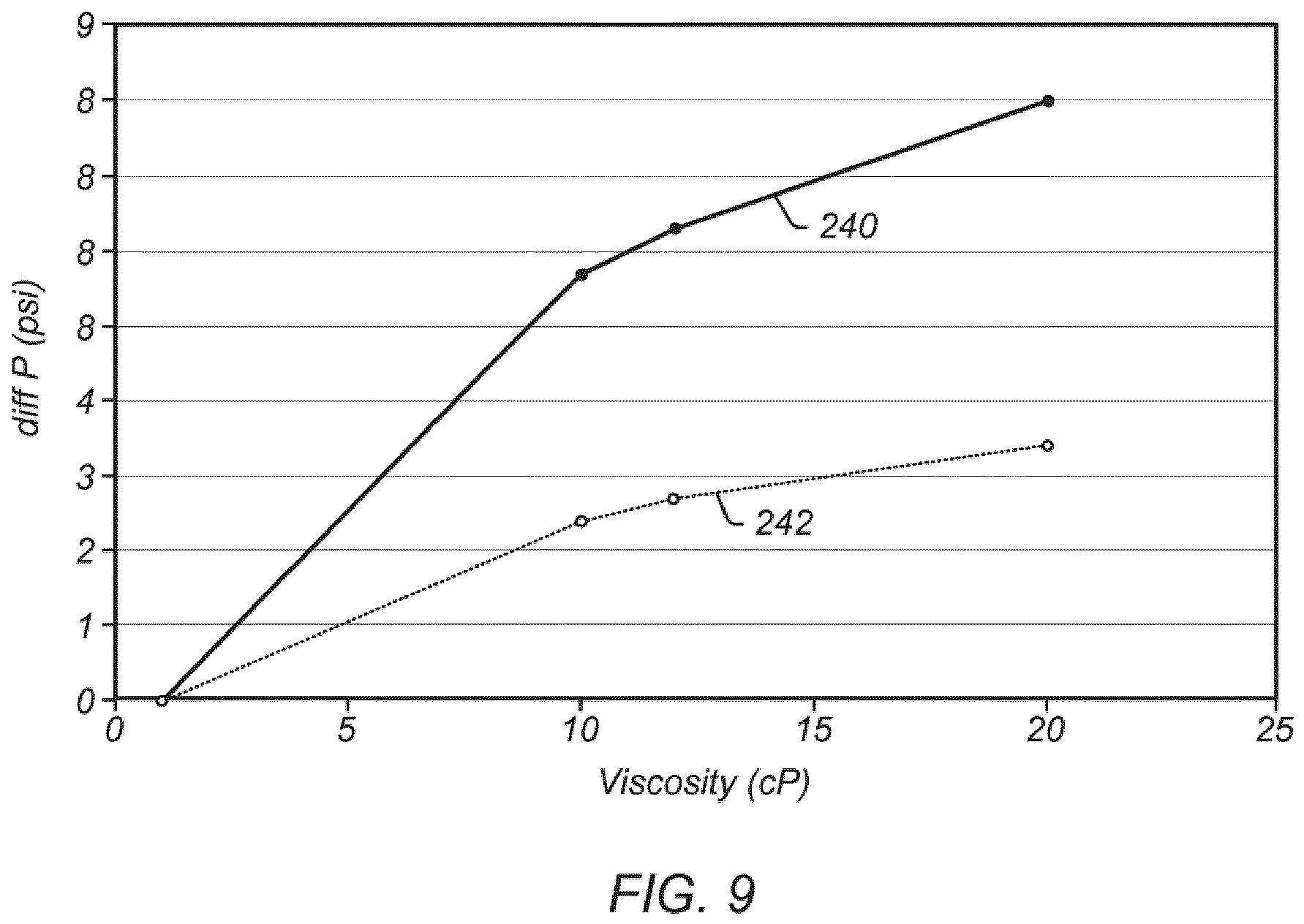 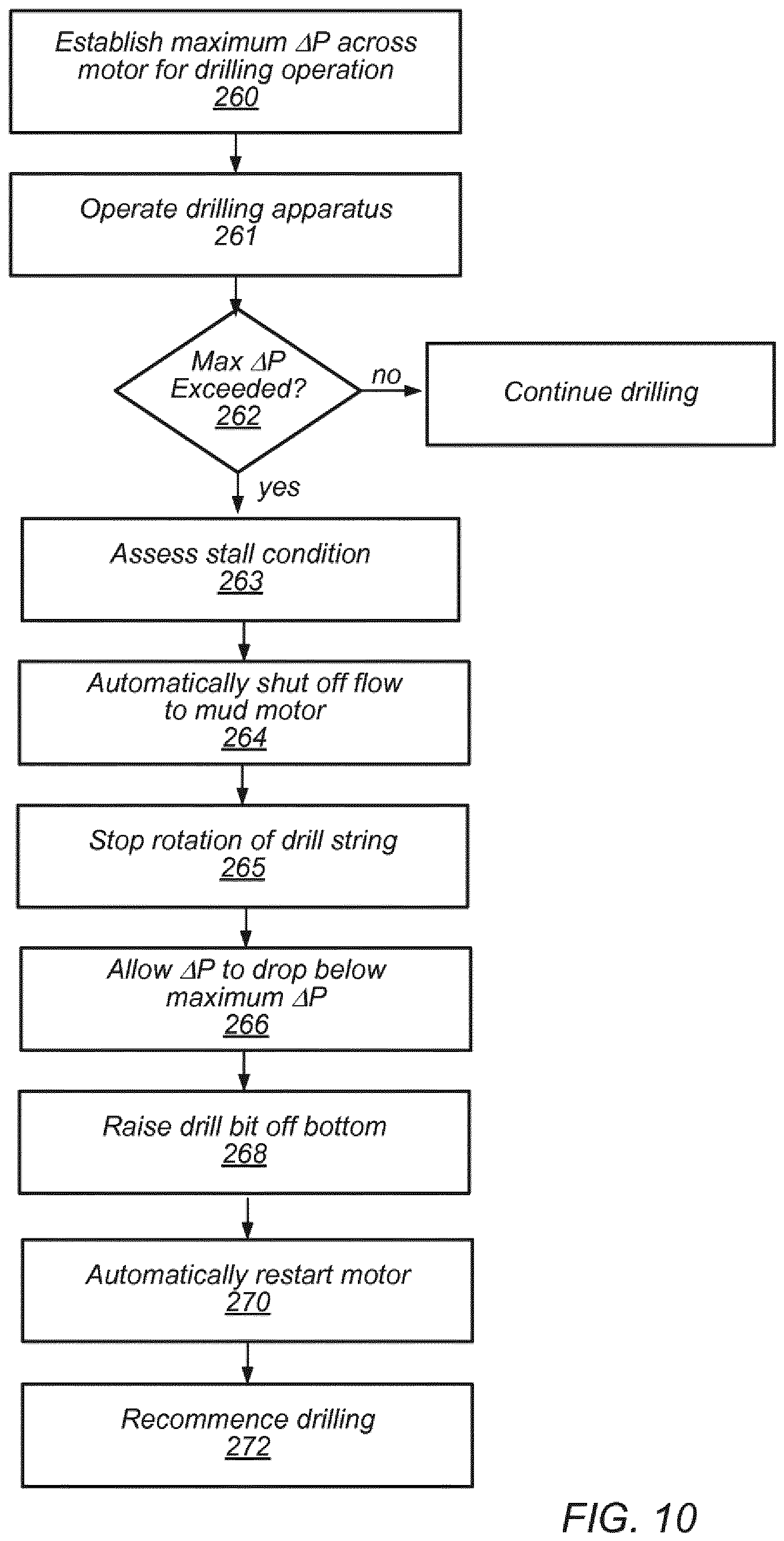 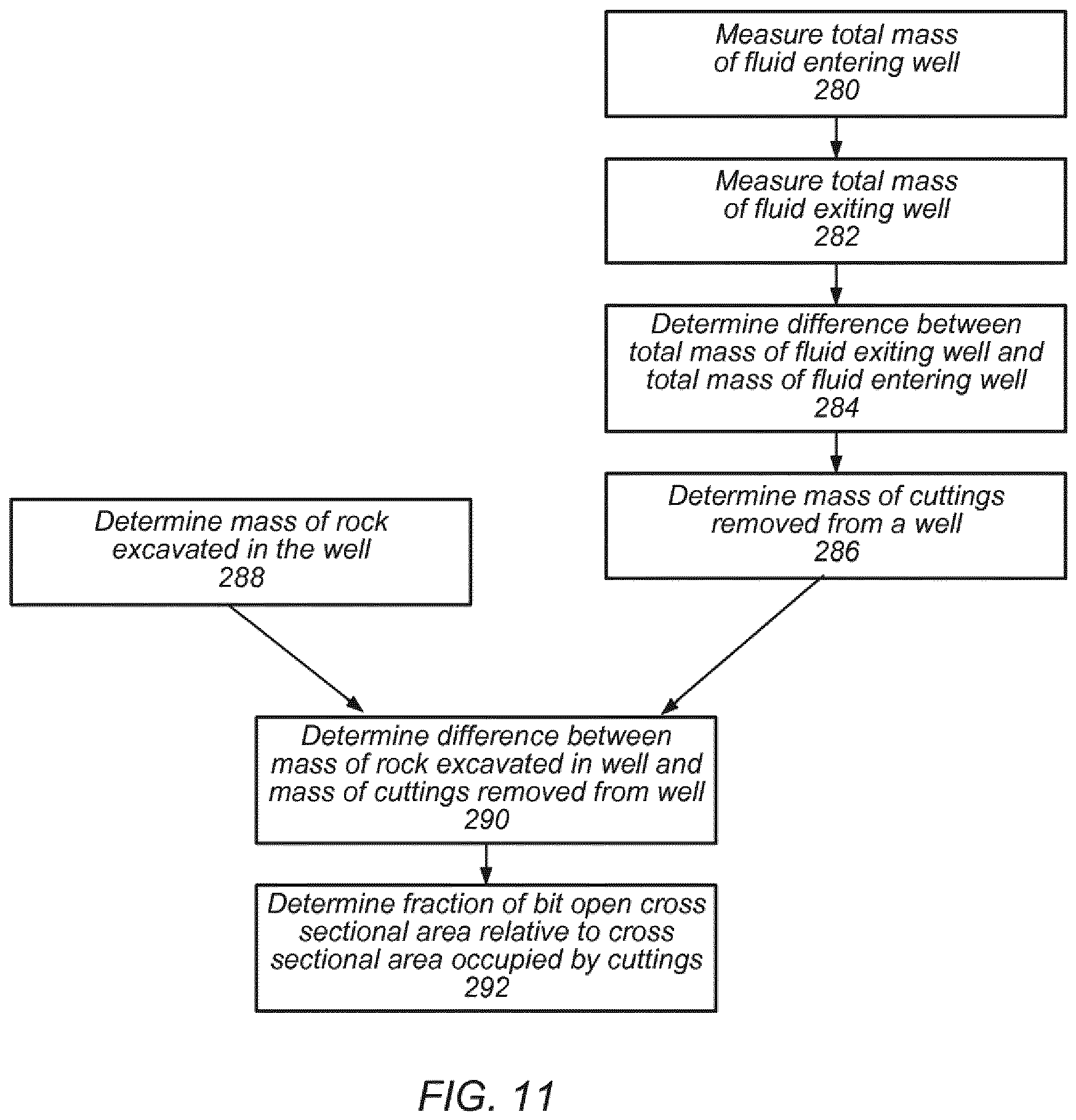 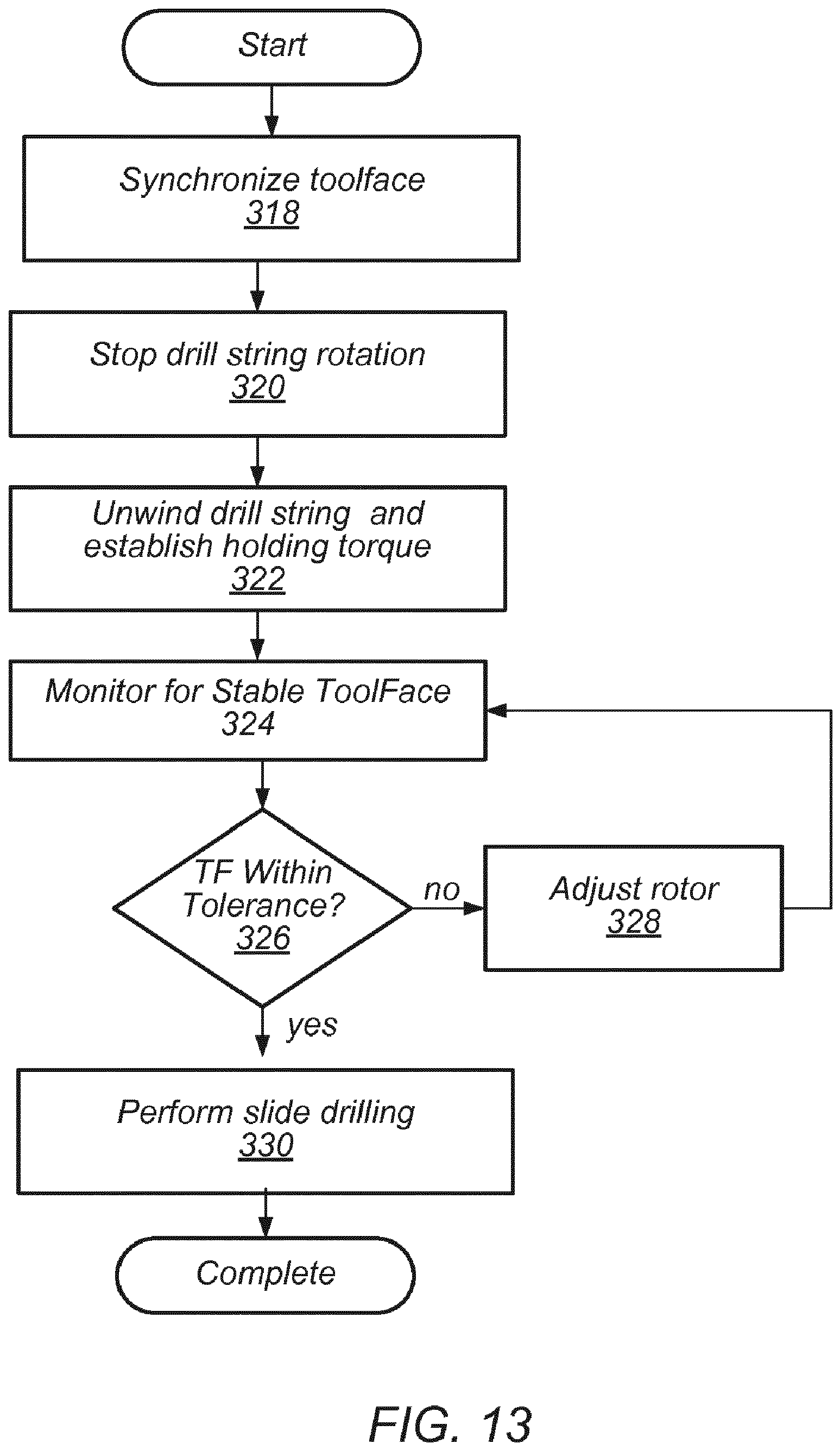 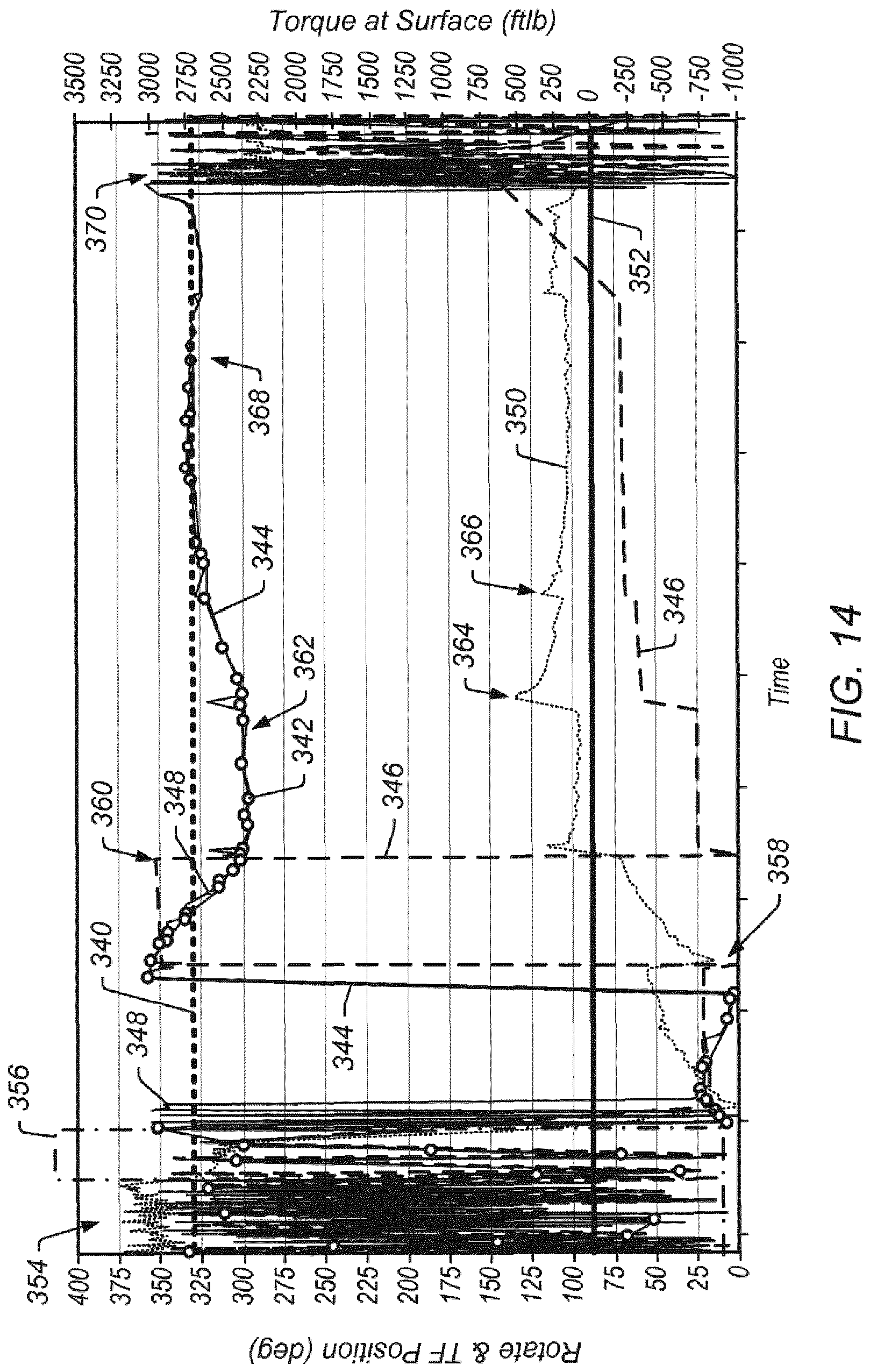 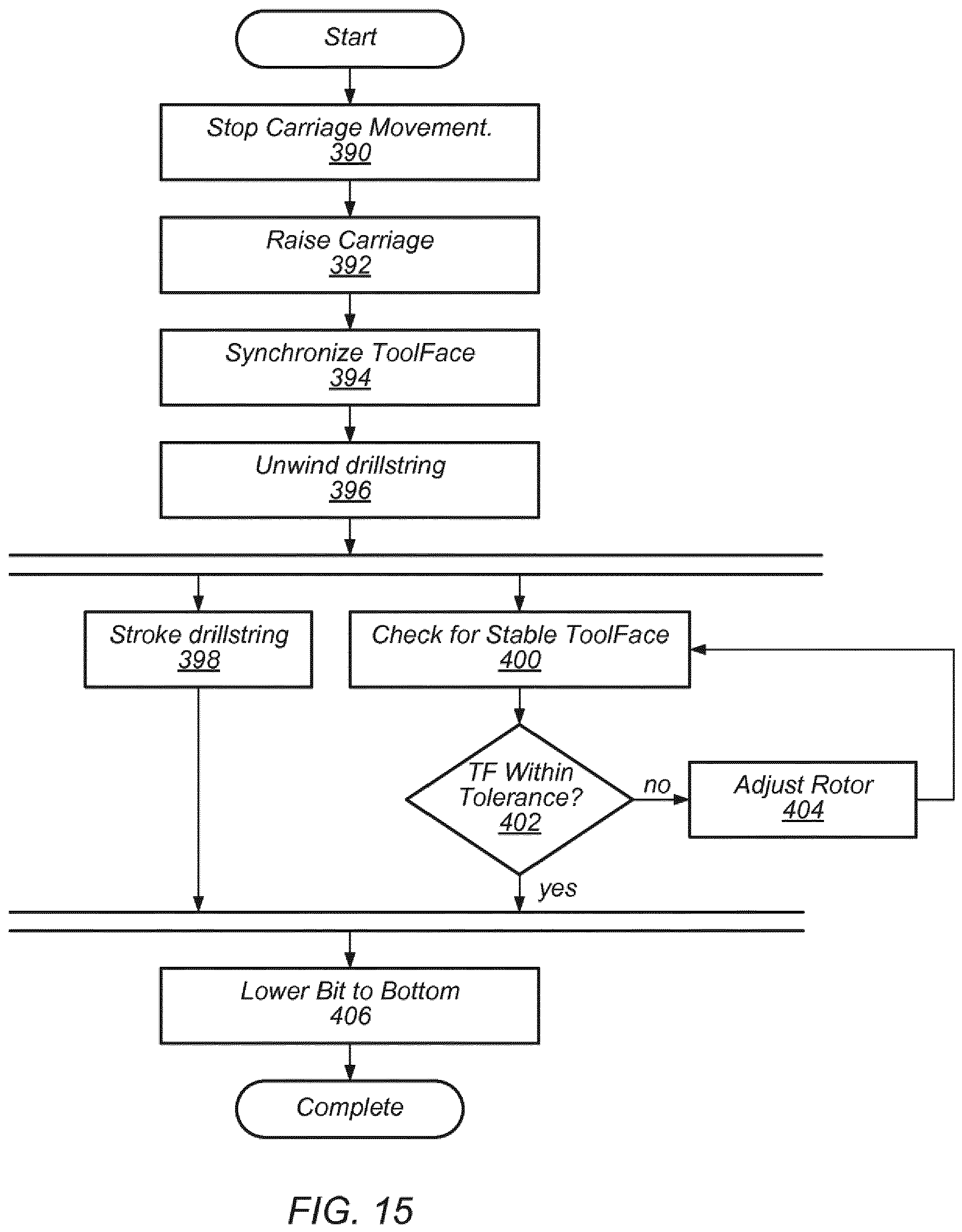 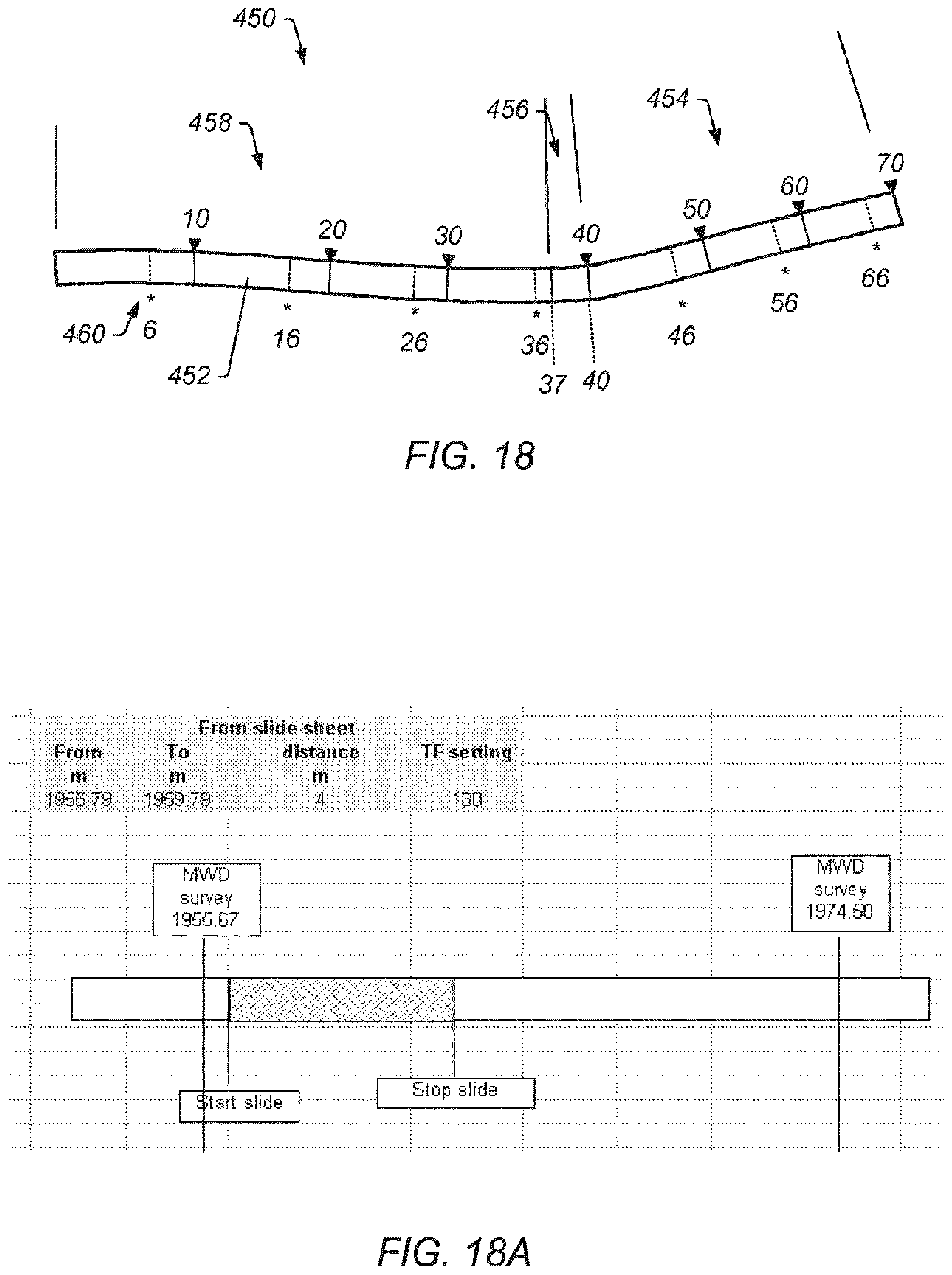 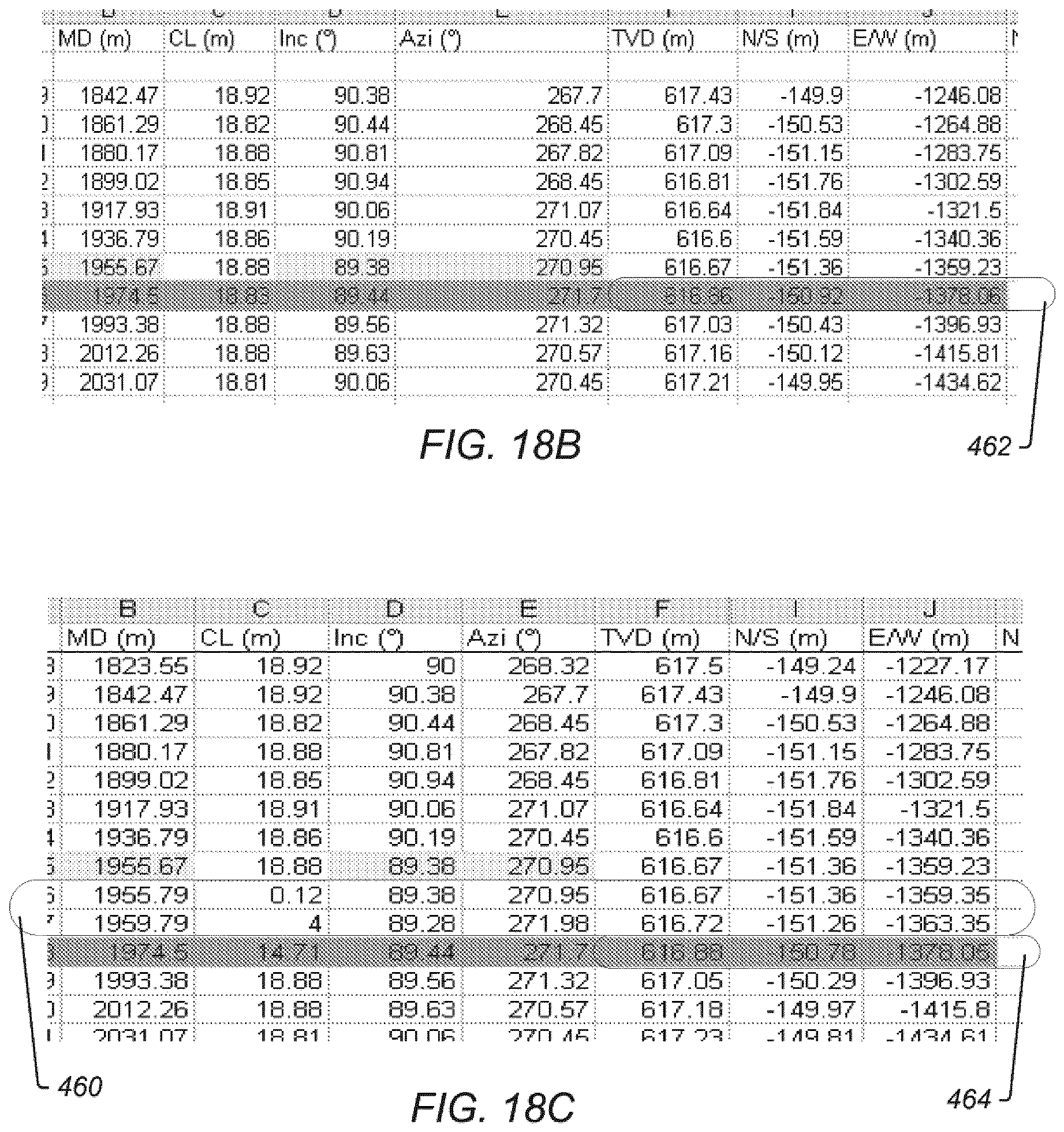 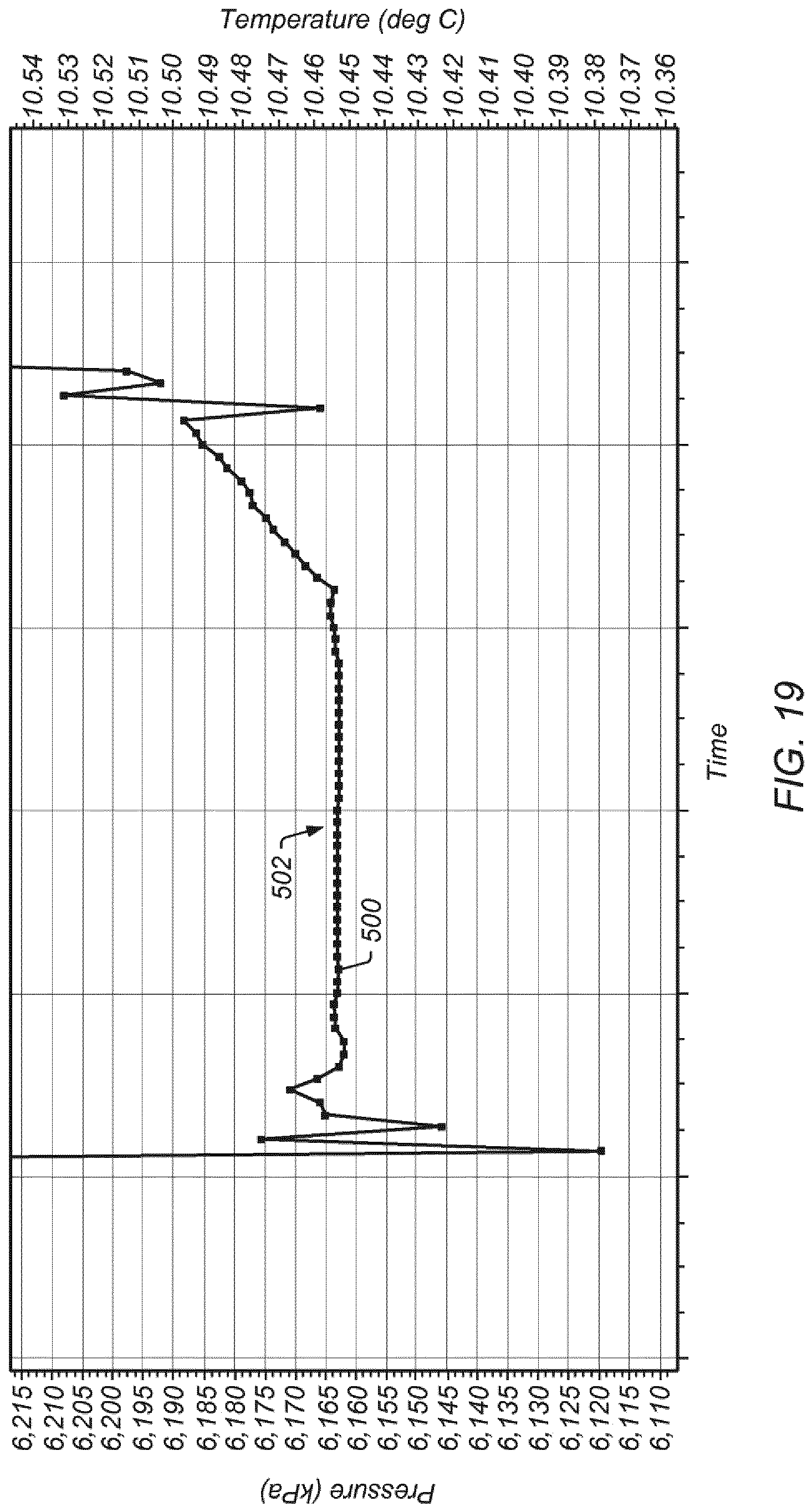 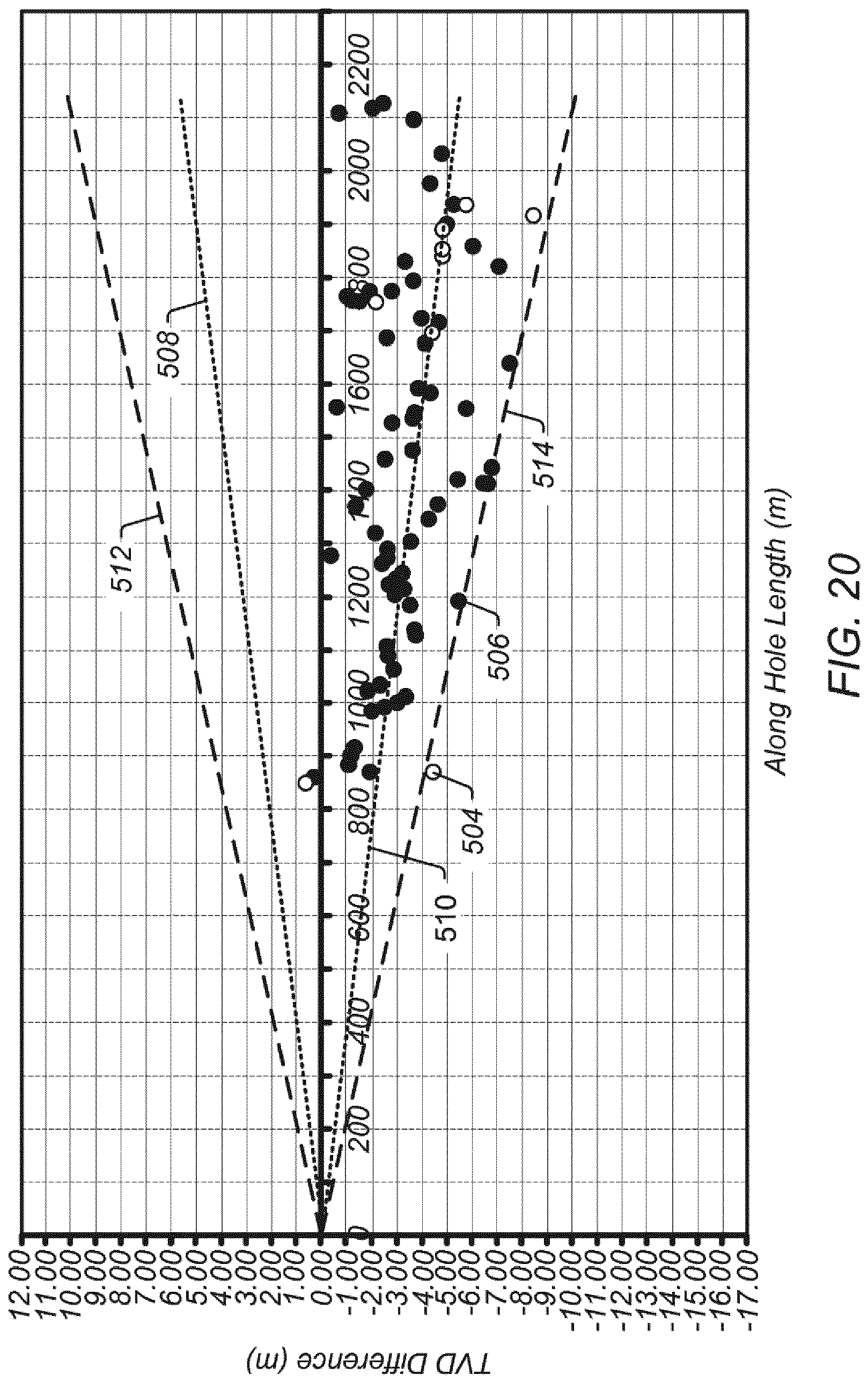 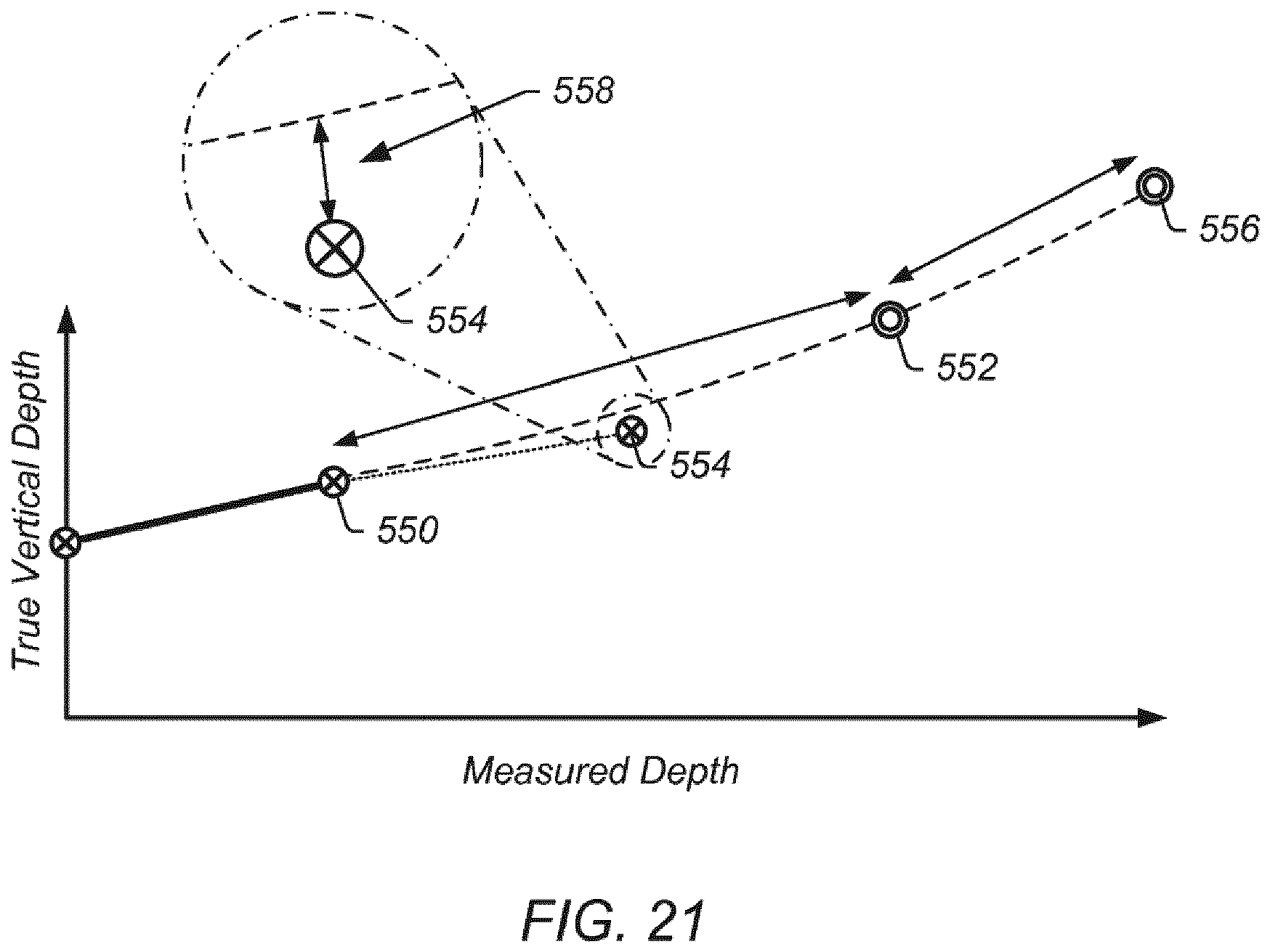 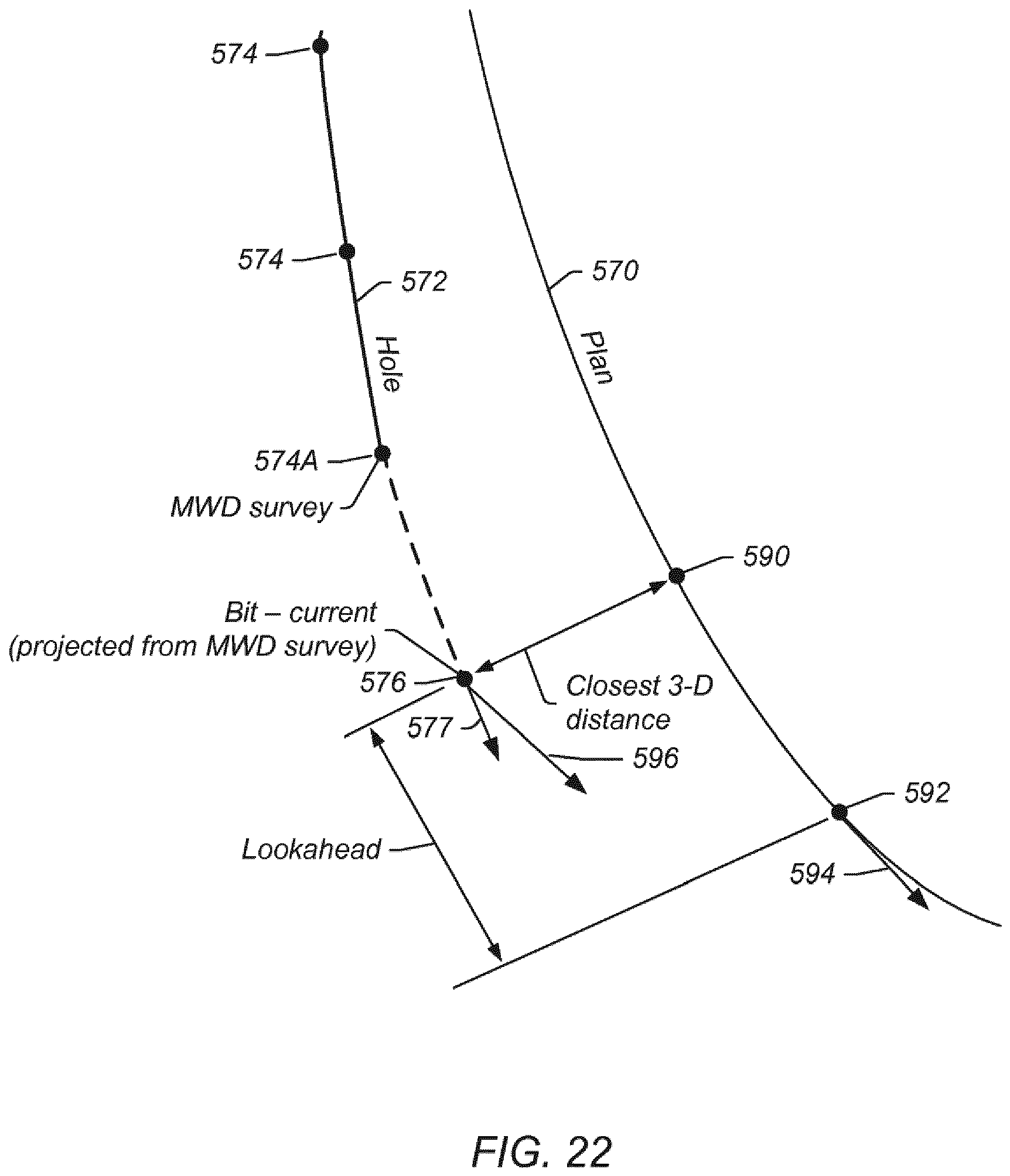 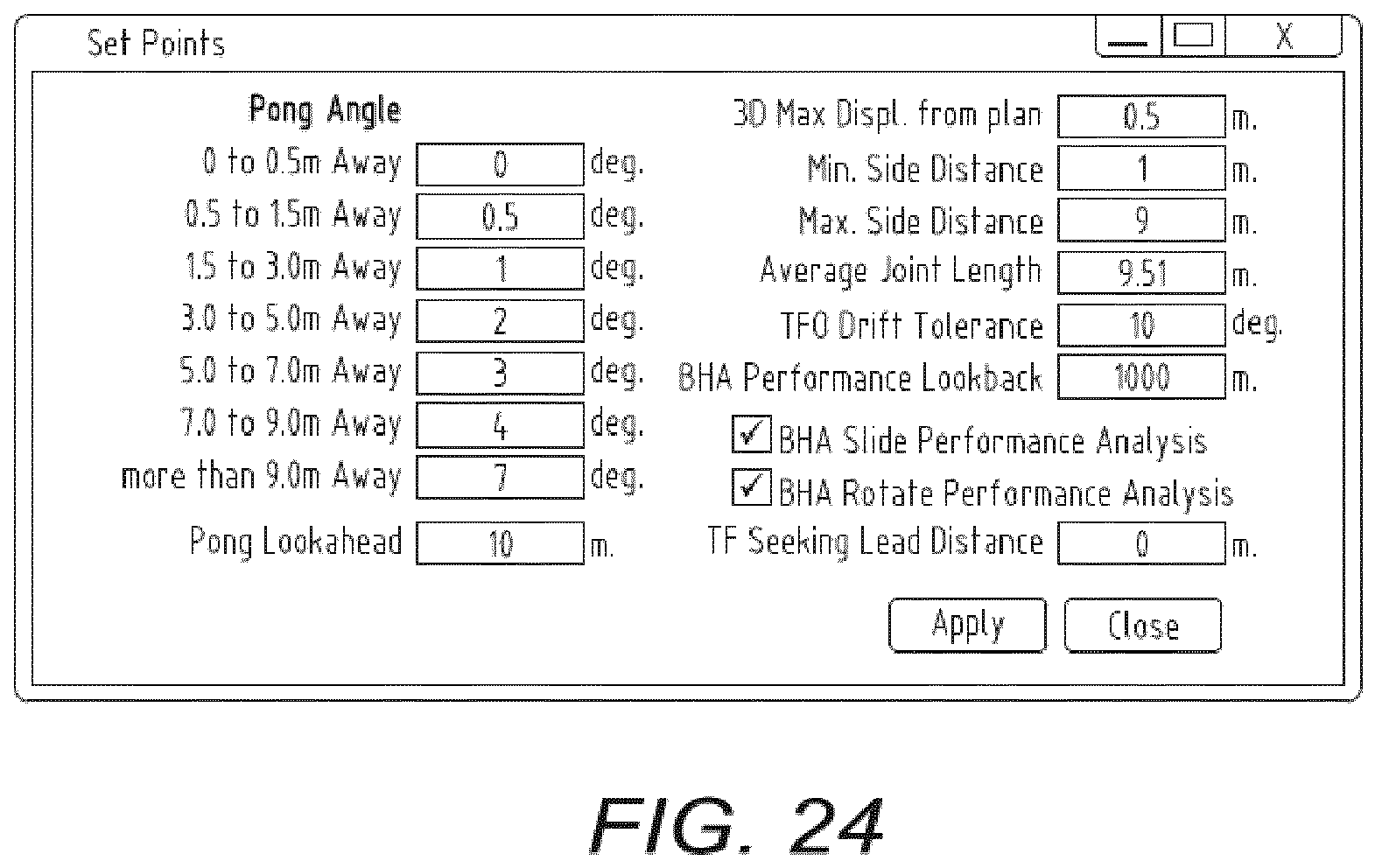