[0002] GB 820 579 A describes a liquid moderated nuclear reactor in which nuclear fuel is cooled by a liquid coolant, in which reactor, the nuclear fuel is housed in a plurality of re-entrant tubes each comprising an inner tube and an outer tube the inner tube containing the nuclear fuel and the liquid coolant being circulated through a space between the inner and outer tube and thence through the inner tube to cool the surface of the nuclear fuel.
[0003] US 6 526 115 B2 describes a supercritical water cooled reactor comprising: a reactor vessel including: a shell part for containing sub-critical pressure coolant, and an end part for containing supercritical-pressure coolant which is separated from the sub-critical pressure coolant in the reactor vessel; a core-support plate with through-holes, the core-support plate disposed in and fixed to the reactor vessel so that the core-support plate divides space inside the reactor vessel into a supercritical-pressure portion and a sub-critical pressure portion; fuel tubes with both open ends fixed to the through-holes, the open ends being communicated to the supercritical-pressure portion, outside of the fuel tubes being disposed in the sub-critical pressure portion; and nuclear fuel assemblies disposed in the fuel tubes.
[0004] US 5 640 434 A describes a miniaturized nuclear reactor utilizing novel structural members that are used to support the loads and stresses of multiple nuclear reactor fuel channel pressure tubes in a confined area. DE 32 15 122 C1 describes a reactor comprising a pressure vessel, a reactor core, and a core mantle with inlets and outlets for coolant, wherein above the core, the core mantle has a coolant outlet port with a throttling device which can be moved to increase or reduce the area for coolant flow, and which can be used to control the flow of coolant through the core.
[0005] Commercial nuclear power plants are known. Based on the mechanical design of the pressure retaining components of the reactor core, commercial nuclear reactors can be grouped as either "pressure-vessel" or "pressure-tube" type reactors.
[0006] Examples of a pressure-vessel type reactor are Pressurized Water Reactors (PWR) and Boiling Water Reactors (BWR). In these reactor designs nuclear fuel is contained in a large pressure vessel. In such pressure-vessel type reactors the coolant and the moderator fluid may be the same fluid and thus there is no need to maintain two different fluids separated from one another within the pressure vessel. The single fluid can be supplied to the pressure vessel using an inlet plenum and withdrawn from the vessel using an outlet plenum. In such designs there is no need to isolate a coolant fluid from a separate or different moderator fluid, consequently the plenums need not feed a plurality of separate, sealed fuel channels. The shared moderator/ coolant fluid in such reactors is typically light water (H2O).
[0007] In one example, referred to as Pressurized Heavy Water Reactors (PHWR), a low pressure heavy water moderator surrounds the fuel channels and a separate pressurized flow of heavy water coolant is circulated through the fuel channels. Examples of this type of reactor can be operated using natural uranium fuel. In these examples, the term "Pressurized Heavy Water" refers to the coolant in the fuel channels, not the separate heavy water moderator.
[0008] In another example, a low pressure heavy water moderator fluid surrounds the fuel channels and a separate pressurized flow of light water coolant is circulated through the fuel channels. This type of reactor can be operated using enriched uranium fuel.
[0009] Traditional, horizontal pressure-tube nuclear reactors are known. Existing pressure-tube reactors include a plurality of individual fuel channels or pressure tubes extending horizontally through a low pressure calandria vessel containing a heavy water moderator. Nuclear fuel bundles are placed within the pressure tubes and a coolant fluid is circulated through the pressure tubes to be heated by the nuclear reactions.
[0010] Coolant feeder pipes (coolant inlet pipes and coolant outlet pipes) in existing pressure-tube reactors are an integral part of the circulating heat transport system, connecting the in-reactor fuel channels with the primary heat transport pipes. The low pressure calandria vessel commonly has separate calandria tubes, to define the space for the moderator, and the pressure tubes extend through the calandria tubes. Garter springs maintain spacing between each pair of a calandria tube and a pressure tube, and define an annulus.
[0011] A typical pressure-tube design can include a plurality of fuel channels and twice as many feeder pipes (each tube having a corresponding inlet and outlet feeder).
[0012] A feature of some existing pressure-tube designs is the on-line fuelling capability. The use of separate feeders allows on-line fuelling through a removable end channel seal closure and a remotely operated fuelling machine.
[0013] Existing reactor designs, both of the pressure-vessel and pressure-tube type, cannot readily be adapted for use with a supercritical fluid, e.g. water, as the coolant and heat transfer medium. For a supercritical fluid, this specification and the present invention propose a configuration of pressure tubes, suitable for use with such a fluid. To reach a supercritical state, the coolant fluid will be maintained at high pressures (for example at pressures greater than 23MPa) and at elevated temperatures. Existing pressure tube and pressure-vessel type designs cannot withstand such high pressures, and existing pressure tube and pressure vessel materials can be prone to increased corrosion and wear when exposed to supercritical fluids. Simply increasing the size or thickness of existing pressure tubes and pressure vessels may not be possible due to manufacturing limitations or tube spacing requirements and may affect reactor efficiency.
[0014] Creating pressure vessels for existing reactor designs to withstand high pressures and correspondingly high temperatures can be costly and difficult, and exposure to supercritical fluid flows can erode exposed portions of the pressure vessel walls, which may lead to increased maintenance and premature failure.

[0015] The present invention provides a nuclear reactor according to claim 1, and a method of operating a nuclear reactor according to claim 11. This summary is intended to introduce the reader to the more detailed description that follows and not to limit or define any claimed or as yet unclaimed invention. One or more inventions may reside in any combination or sub-combination of the elements or process steps disclosed in any part of this document including its claims and figures.

[0016] For a better understanding of the pressure-tube reactor with separate pressurized moderator described herein and to show more clearly how they may be carried into effect, reference will now be made, by way of example only, to the accompanying drawings which show at least one exemplary embodiment, and in which:

Figure 1 is a partial sectional, front plan view of an example of a nuclear reactor;

Figure 2 is a sectional view of a fuel channel that can be used in the nuclear reactor of Figure 1;

Figure 2A is an enlarged view of section 2A indicated on Figure 2;

Figure 3 is a partial sectional, isometric view of the reactor of Figure 1 ;

Figure 4 is a partially exploded view of the reactor shown in Figure 3;

Figure 5 is a sectional view of a connection of an outlet plenum used in the reactor of Figure 1;

Figure 6 is a schematic view of a reactor having two core modules.

[0017] For simplicity and clarity of illustration, elements shown in the figures have not necessarily been drawn to scale. For example, the dimensions of some of the elements may be exaggerated relative to other elements for clarity. Further, where considered appropriate, reference numerals may be repeated among the figures to indicate corresponding or analogous elements.

a) a pressure vessel (104) for containing a pressurized heavy water moderator at a first pressure that is between 5 and 35 Mpa and;

7. The nuclear reactor of claim 3, 4, 5 or 6, wherein the coolant outlet plenum further comprises a detachable outlet plenum cover to allow simultaneous access to an outlet plenum chamber and the respective outlet ends of the plurality of fuel channels.

8. The nuclear reactor of any preceding claim, wherein the second pressure is between 20 and 30 Mpa.

11. A method of operating a pressure-tube nuclear reactor (100) according to claim 1 comprising:

b) providing a plurality of fuel channels (102) extending through the pressure vessel, surrounded by the moderator;

c) placing at least one nuclear fuel bundle (106) within each fuel channel; 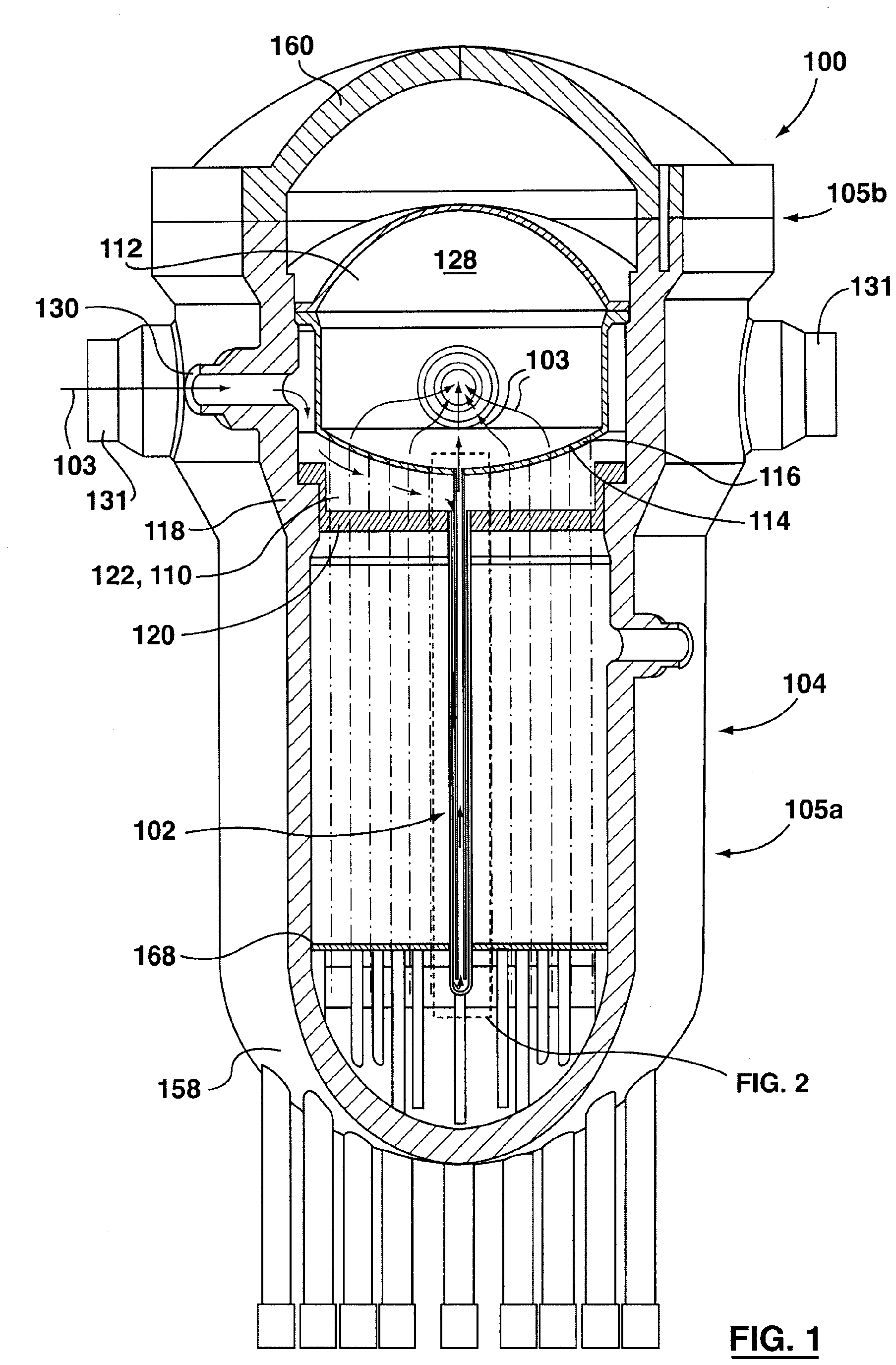 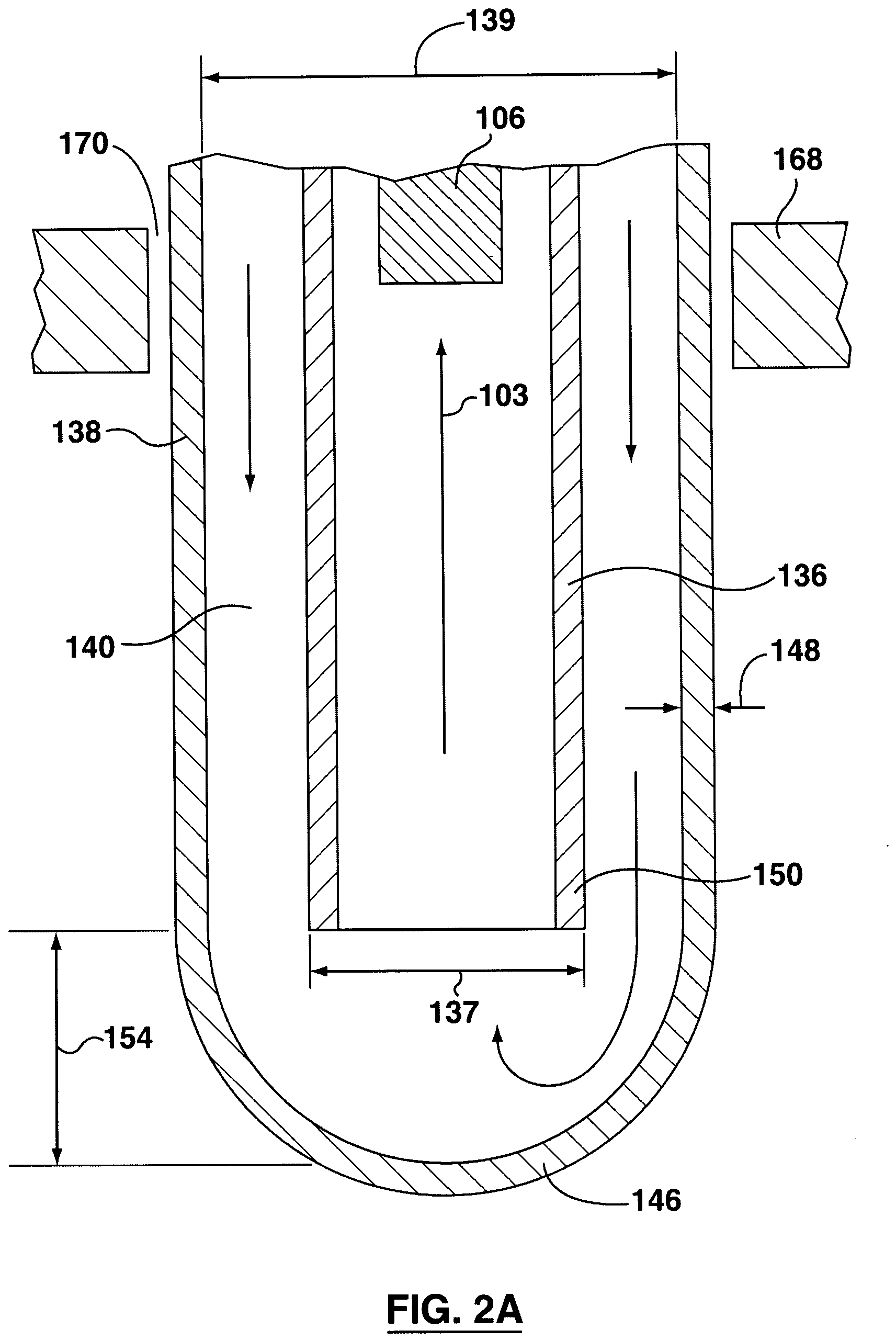 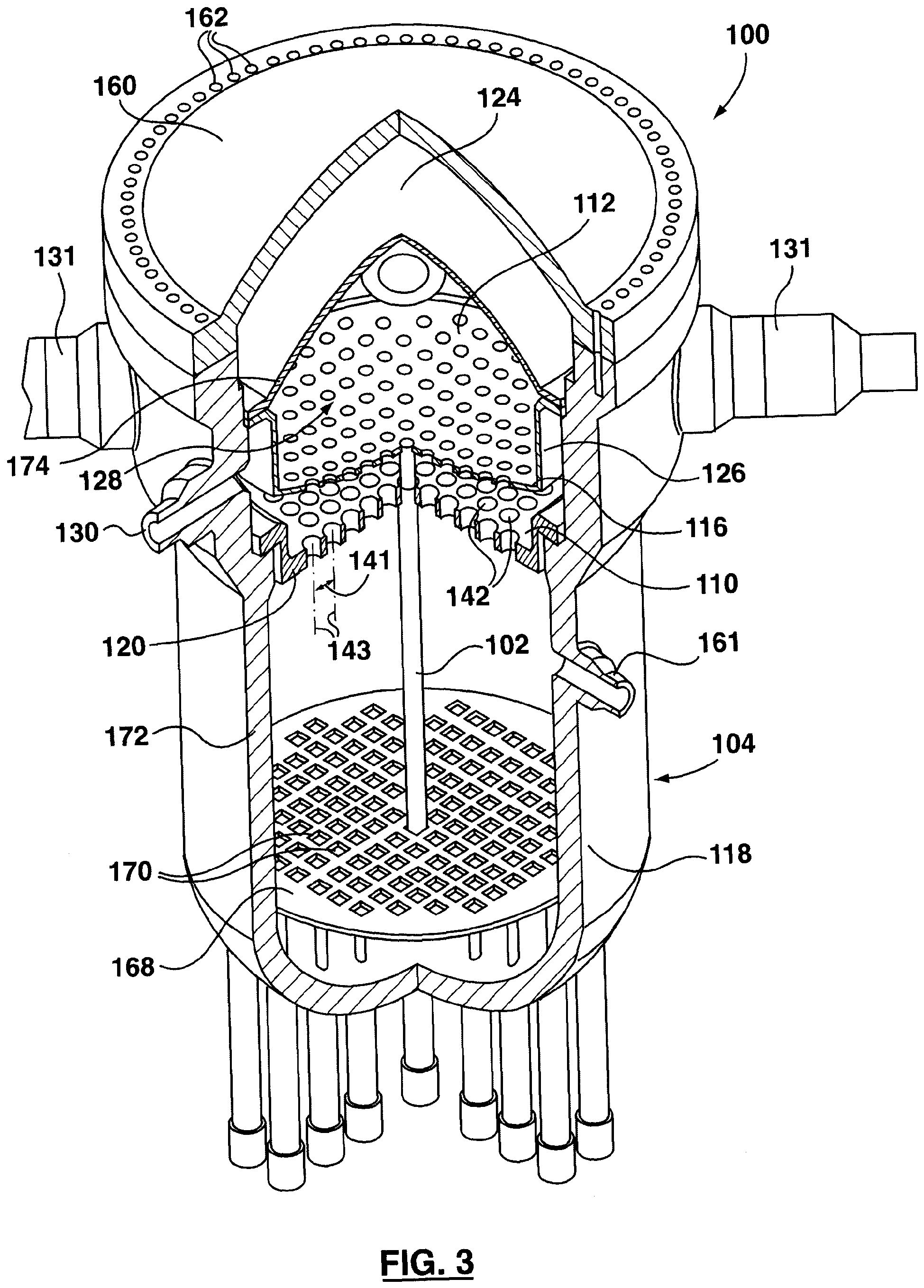 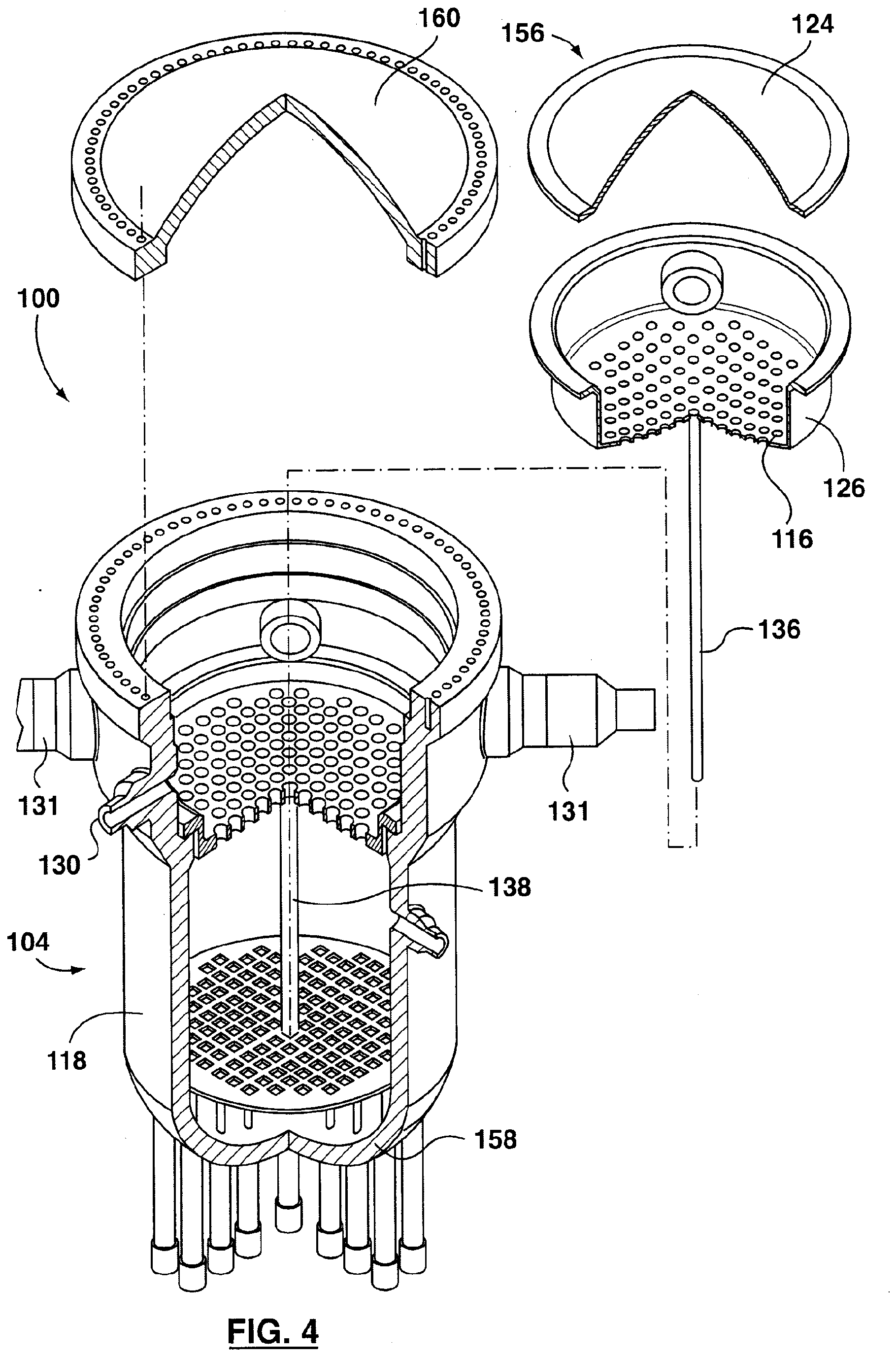 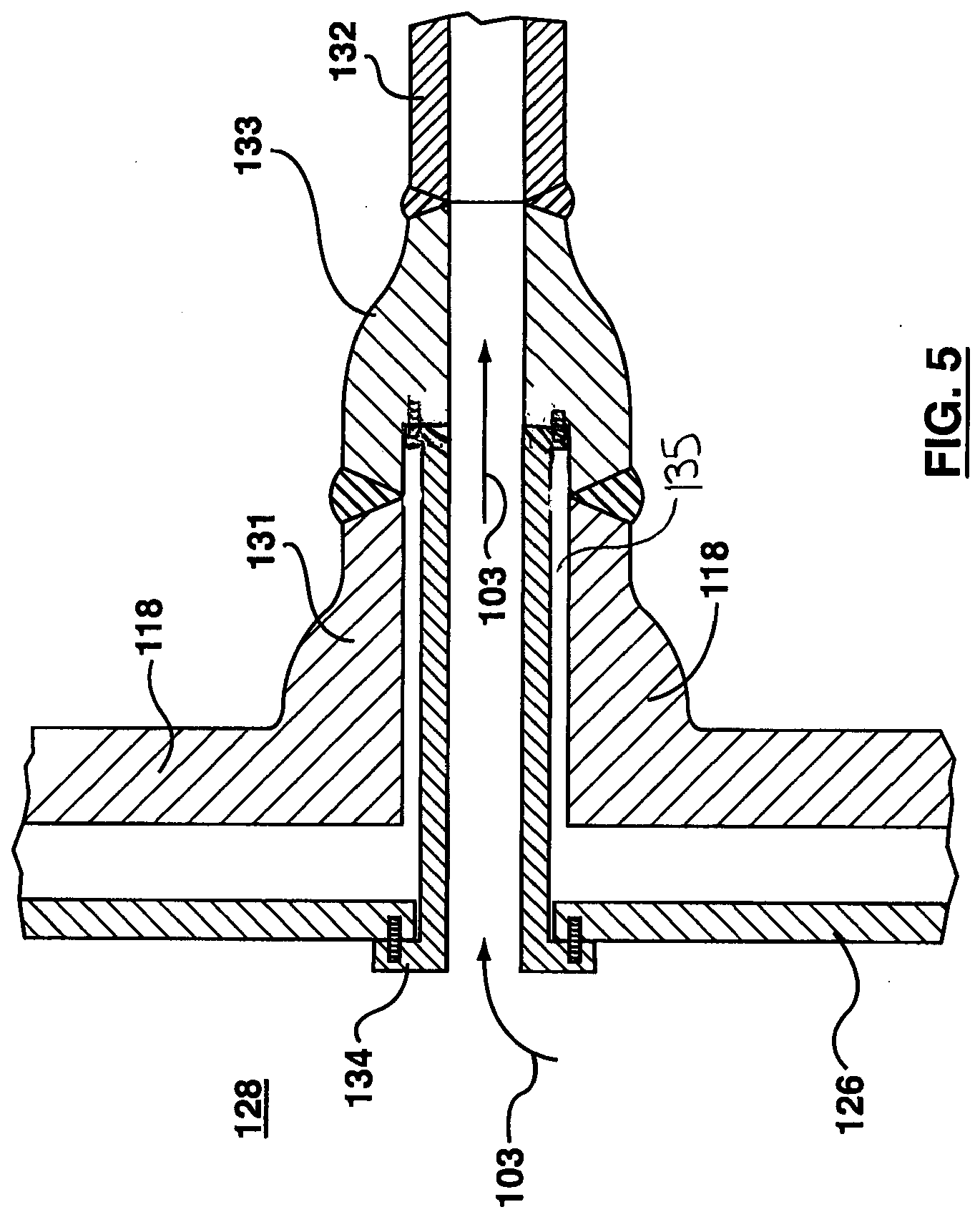 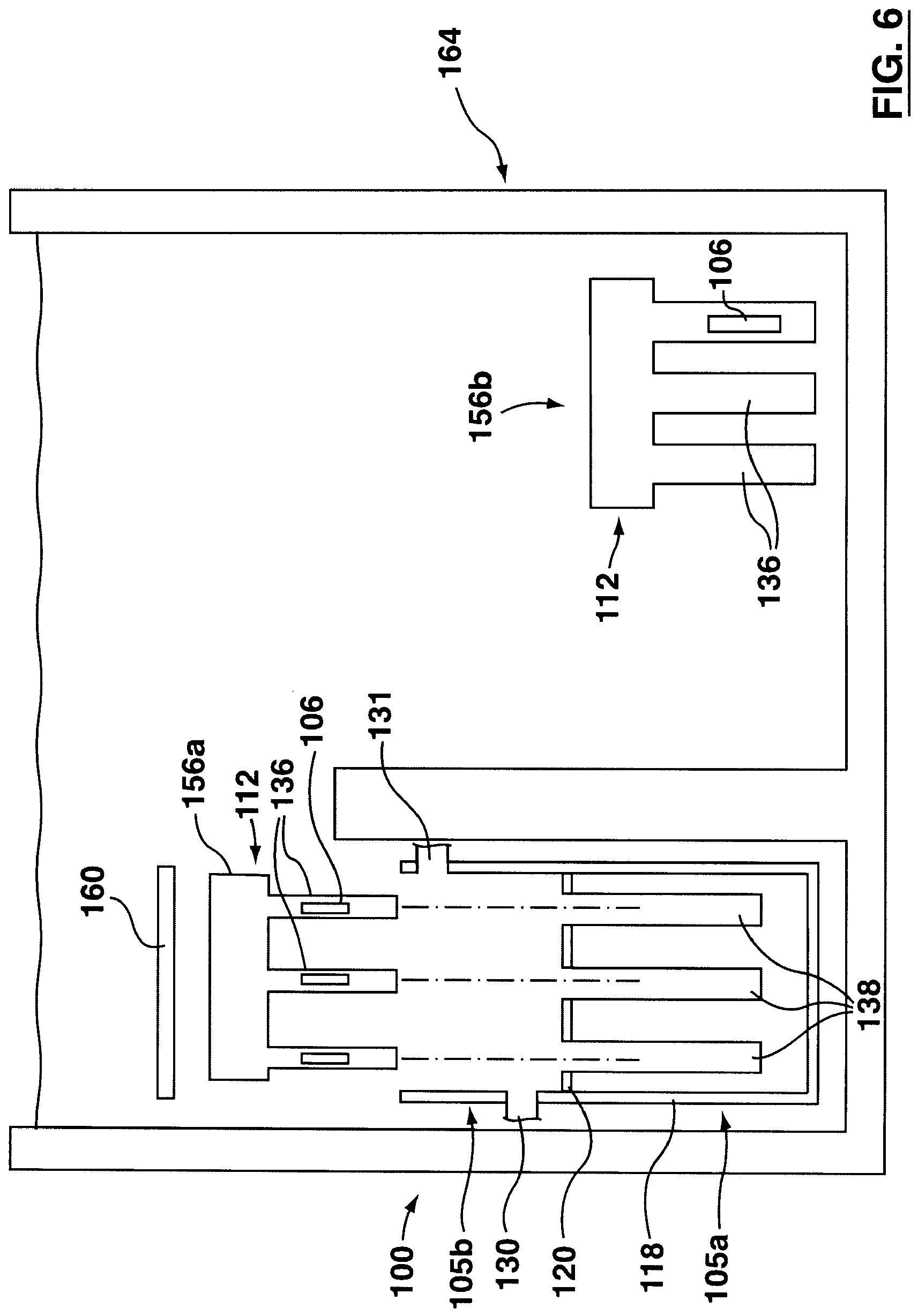