[0001] This invention relates to methods of processing of dried samples for subsequent analysis. Blood samples stored as dried blood spots have emerged as a useful sampling and storage vehicle for clinical and pharmaceutical analysis in a wide range of applications. For example, the Newborn Screening Ontario facility at the Children's Hospital of Eastern Ontario evaluates dried blood spot samples from approximately 140,000 babies each year for 28 inherited diseases. In each screening test, a dried blood spot sample is collected and then mailed to facility for analysis by tandem mass spectrometry (MS/MS). Unfortunately, this technique is slowed by an extensive sample preparation regimen (including excision/punching, extraction, evaporation, resolubilization, and derivatization), and in addition, high-throughput screening typically requires robotic sample handling.
[0002] The success of dried blood spot sampling and MS/MS for newborn screening has led to a surge in popularity for similar techniques for a wide spectrum of applications in clinical labs and the pharmaceutical industry. Dried blood spot sampling methods allow for the collection of small amounts of sample and are convenient for long-term storage and cataloguing. MS/MS methods allow for the unambiguous identification and quantification of many different analytes in a single shot.
[0003] Unfortunately, the throughput and turn-around-time associated with this technique are problematic as a result of time-consuming sample preparation. In particular, the off-line sample preparation of blood spots on filter paper necessitates the labor intensive and time consuming steps of extraction via centrifugation, in which the analyte is obtained in a supernatant. Furthermore, the maintenance of instruments (sample preparation robots and mass spectrometers) and plumbing (capillary tubes and associated connections) requires many hours of laboratory-time, which reduces the throughput of such analyses. In addition, the costs are magnified by the scale of operation (for example, nearly 150,000 samples are processed a year in Ontario alone).
[0004] In US 2010/0081578, there is disclosed a known method of sample preparation wherein a support sheet covers the whole array of a digital microfluidic device.
[0005] It is against the background, and the limitations and problems associated therewith, that the present invention has been developed.

[0011] Embodiments will now be described, by way of example only, with reference to the drawings, in which:

Figure 1 illustrates steps in sample processing by digital microfluidics. The top image is a schematic of a digital microfluidic device which allows for the processing of 3 blood samples simultaneously. The bottom image is a sequence of frames from a movie (left-to-right) depicting several stages in sample processing including: (1) a dried blood sample; (2) mixing and incubating an extracted droplet with the sample; (3) a droplet containing sample extractate after translation away from the dried sample; (4) a dried extract; (5) mixing and incubating a derivatization reagent droplet with the dried extract; and (6) the dried, derivatized product.

Figure 2 illustrates three digital microfluidic methods for processing different sample formats, where (a) shows a droplet of blood spotted directly onto the device surface and allowed to dry, (b) In method 2 shows a punch from filter paper bearing dried blood that is positioned on the device surface.

Figure 3 illustrates the steps in processing blood samples for quantification of amino acid by tandem mass spectrometry. (a) Reaction scheme involving derivatization of the extracted amino acid, followed by derivatization with n-butanol, followed by the formation of a daughter ion by collision induced dissociation in the mass spectrometer. (b) Mass spectrum generated from primary analysis of derivatized phenyalanine (Phe). (c) Mass spectrum generated from the secondary analysis of derivatized Phe showing the loss of 102 amu as a result of collision induced dissociation.

Figures 7 (a)-(c) shows a series of frames from a movie (top-to-bottom) demonstrating derivatization and extraction of amino acids, resolubilization in solvent, and analyte solution on a hybrid microfluidic device.

Figure 8 is an image of sample spraying from the fabricated emitter into a mass spectrometer inlet.

Figure 9 plots the secondary analysis spectra of (a) Phe and (b) d5-Phe generated from blood samples.

[0050] It is to be understood that while the preceding embodiments have included a derivatization step for processing the extracted analyte using the digital microfluidic array, this step may not be required for extraction protocols that are suitable for other analytes. As such, the derivatization step, or any further on-chip processing steps, may be optionally performed, as appropriate for a given analyte or application.
[0051] Example applications include, but are not limited to, neonatal screening of metabolic disorders (i.e. amino acids and organic acids), other disorders (for example, congenital adrenal hyperplasia, congenital hypothyroidism, biotinidase deficiency and galactosemia), and genetic disorders (e.g. cystic fibrosis and sickle cell diseases).
[0052] For example, in each newborn blood spot analysis, a sample is obtained by pricking the subject's heel (or by venipuncture) and allowing a spot of blood to dry on filter paper. The dried blood spot is typically couriered to a lab, where 3.2 mm diameter circular discs are punched, and the analytes are extracted, mixed with isotope-labeled internal standards, derivatized, and then reconstituted for analysis by tandem mass spectrometry (MS/MS). As shown in Figure 3(a), the derivatization step transforms each amino acid to its corresponding butyl ester (derivatized amino acid) that allows for a characteristic fragmentation pattern (neutral loss of 102) via collision induced dissociation . Figures 3(b-c) contains representative primary (MS1) and secondary (MS2) mass spectra for the amino acid, phenylalanine, with peaks at m/z 222 and 120. In addition to amino acids, the same derivatization step butylates acylcarnitines (AC), which serve as markers of inborn errors of fatty acid and organic acid metabolism.
[0053] An additional and clinically relevant advantage of the present digital microfluidic methods is the reduction in sample size that may be achieved relative to conventional processing methods. In some cases, the reduction in volume may be approximately 15-20x. This reduction has the potential to be beneficial for applications in which it is desirable to employ small sample volumes, such as in the testing of newborn patients, from which five spots of blood are typically collected for analysis, and in high throughput screening applications.
[0054] In the examples provided herein, the small volume required (5 x 5 µL = 25 µL) for certain clinical in-vitro diagnostic assays can be collected as capillary blood with a single needle-prick, but in conventional sample processing methods, the volume (5 x 75-100 µL = 375-500 µL) often requires multiple pricks and tissue-squeezing, which can contaminate the sample with interstitial fluids, invalidating it for testing. Other sample size-related advantages of the present embodiments are a reduction in reagent use (fpr example, 20 µL vs. 170-450 µL), and a reduction in analysis time (~1 h vs. >3.5 h). This reduction in reagents and analysis time, combined with the potential elimination of sample preparation robotic liquid handling systems, makes the present methods an attractive option for diagnostic testing in a time of increasing costs for health care.
[0055] The following examples are presented to enable those skilled in the art to understand and to practice the present invention. They should not be considered as a limitation on the scope of the invention, but merely as being illustrative and representative thereof.

[0069] Fluorescence and MS/MS were used as an orthogonal test to evaluate the extraction efficiency of the new digital microfluidic technique. The former method relies on fluorescamine, a fluorogenic reagent that exhibits no fluorescence until it reacts with primary amines. Recovery was determined by comparing the fluorescence intensity of multiple samples before and after extraction. In the latter (MS/MS) method, blood samples were spiked with amino acid and recovery was determined by comparing the amino acid concentration (native amino acid plus spiked amino acid) vs. known concentration. As listed in Table 5, the two orthogonal methods (fluorescence and MS/MS) agree and reveal the new technique to be very efficient and recovery was ≥80% for each standard and blood sample evaluated. As above, the precision of these measurements was high, with CVs ranging from 1 to 10%.
Table 5: % Recovery of the digital microfluidic method measured by fluorescence and MS/MS (± 1 S.D.)

[0070] To validate the new digital microfluidic method as a platform for analyzing amino acid disorders in blood, spiked blood samples (mimicking diseased states) and non-spiked blood samples (mimicking healthy state) were analyzed by mass spectrometry. Figure 6 shows a comparison of measured concentration of amino acids in normal and spiked blood samples. The dashed line indicates the threshold value for diagnosis of homocysteinuria (67 µM Met), phenylketonuria (120 µM Phe), and tyrosinemia (150 µM Tyr). As shown, the method is useful for distinguishing between these states.
[0071] As shown in Figure 4, a hybrid digital microfluidic system was fabricated (using process similar to those disclosed above) in which an nESI device was directly integrated with the microfluidic device. The hybrid digital microfluidic-microchannel devices were fabricated in four steps.
[0072] First, a DMF bottom substrate (layer 205 in Figure 4(a)) bearing an array of DMF driving electrodes) was fabricated as described above, but without a Teflon-AF™ coating). The design was similar to that of the DMF-only devices described above, but with fewer electrodes - 2 rows of 9 actuation electrodes 215 (2.2 ×x 2.2 mm) and 3 reservoir electrodes 220 (5 ×x 5 mm). Moreover, the substrates were first modified by drilling an access hole 230 (∼2 mm diameter) through the substrate using a micro drill-press before the photolithographic processes, where the hole was drilled adjacent to the planned location of an electrode 235. After patterning the electrodes, the opposite side was first coated with 7 µm of Parylene-C for bonding with substrate 210.
[0073] Secondly, a glass substrate 210 bearing a microchannel 245 nanoelectrospray tip 240 formed in Parylene was fabricated. 37 grams of Parylene-C were deposited on piranha cleaned, silanized glass slide (25 x 55 mm) via vapor deposition. After Cr deposition, a microchannel (25 µm wide x 5 mm long) was photolithographically patterned on the substrate by UV radiation (365nm, 35mW/cm2, 50s) using a Karl-Suss MA6 mask aligner (Garching, Germany).
[0074] Third, the channel side of substrate 210 was mated to the non-electrode side of substrate 205, placed under pressure in a precision vise (∼20 MPa), and thermally bonded in a vacuum oven (200°C, 24 h). After cooling, the top of substrate 205 was first coated with 2 µm of parylene followed by spin-coating 50 nm of Teflon-AF with a small piece of dicing tape covering the drilled hole. The tape was removed before post-baking on a hot plate (160°C, 10min).
[0075] Fourth, the top plate 200 was assembled with spacers formed from four pieces of double-sided tape as described above for droplet actuation.
[0076] Using this hybrid device, droplets are manipulated on the top surface, and are subsequently transferred to microchannels on the bottom of the device through the hole. The principle of operating the hybrid device for on-chip sample analysis is shown in Figure 7, which shows several frames from a movie demonstrating derivatization and extraction of amino acids, resolubilization in solvent, and analyte solution on a hybrid microfluidic device. A blood sample 310 was first spotted on the device 300 and the amino acids were extracted and derivatized as described above. The dried, derivatized sample 320 was then resuspended in acetonitrile and the droplet 330 was actuated towards the access hole 340 such that it filled the underlying channel 350. The filled channel can be seen at 360 in Figure 7(c).
[0077] As shown in Figure 8, the fluid in the channel was delivered to a corner 400 of the device and nanoelectropsray 410 was generated by applying a high voltage to the counter electrode 420. Representative mass spectra generated from samples processed and analyzed on-chip are shown in Figure 9. The entire process requires ∼1 h from sampling to analysis, and requires only the hybrid digital microfluidic device and a mass spectrometer (i.e., no complex nanoflow pumps, robots, samplers, or control software).

1. A method of sample preparation comprising the steps of:

providing an extraction solvent at an additional location that is dropwise addressable under actuation of said digital microfluidic device;

providing a derivatization solvent at an additional location that is dropwise addressable under actuation of said digital microfluidic device;

positioning said outlet of said microfluidic channel adjacent to an inlet of a mass analysis device; and 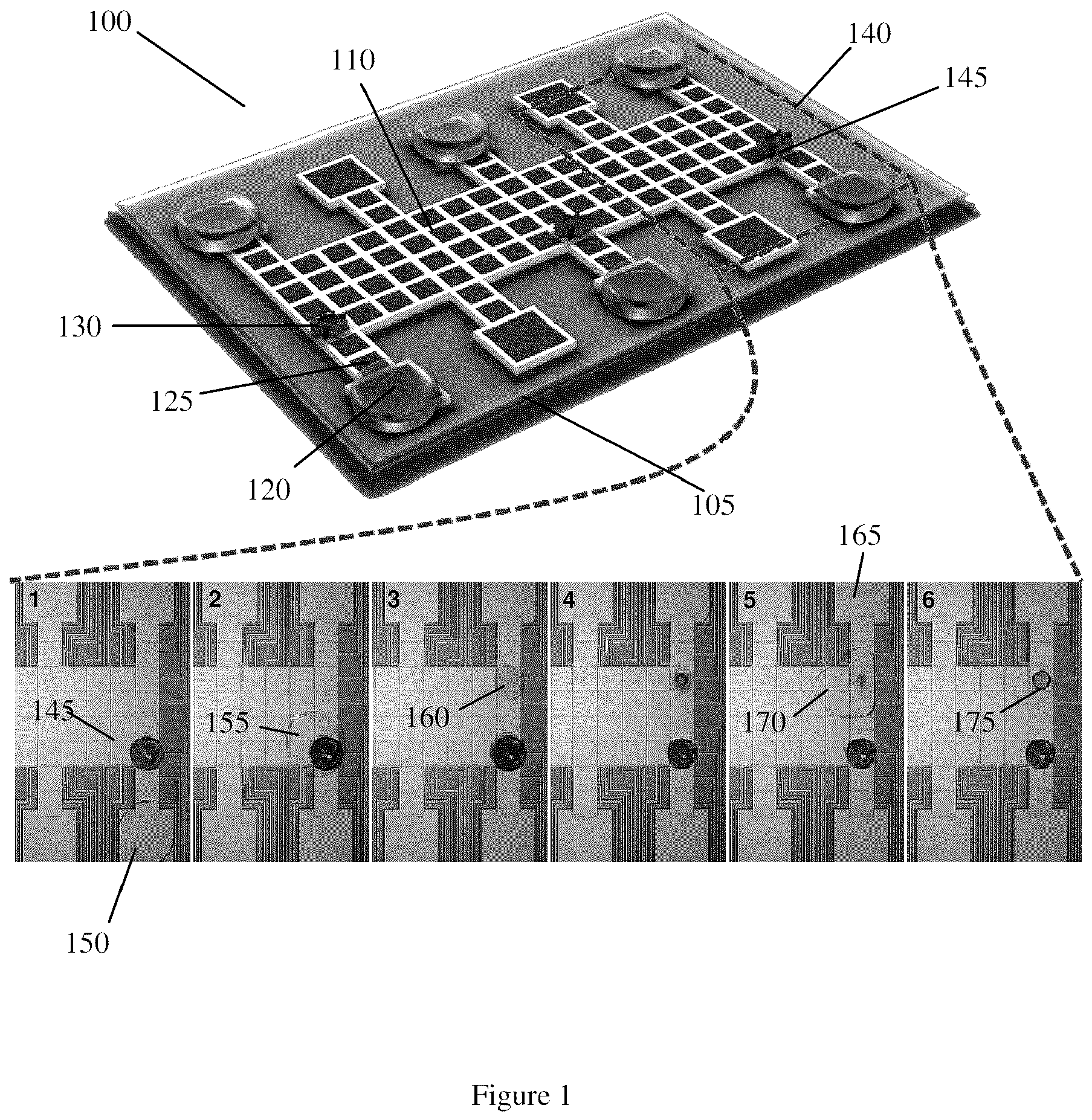 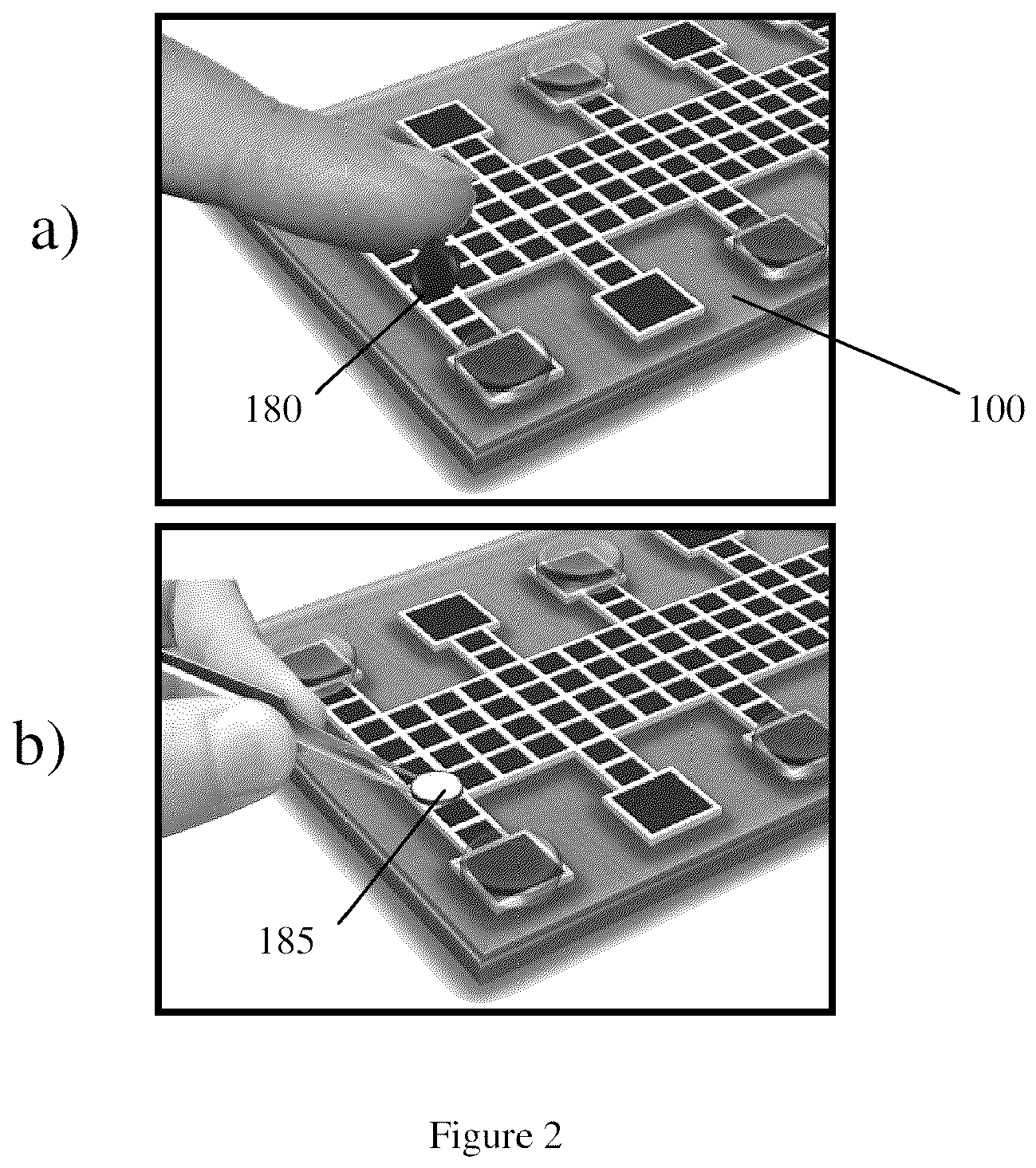 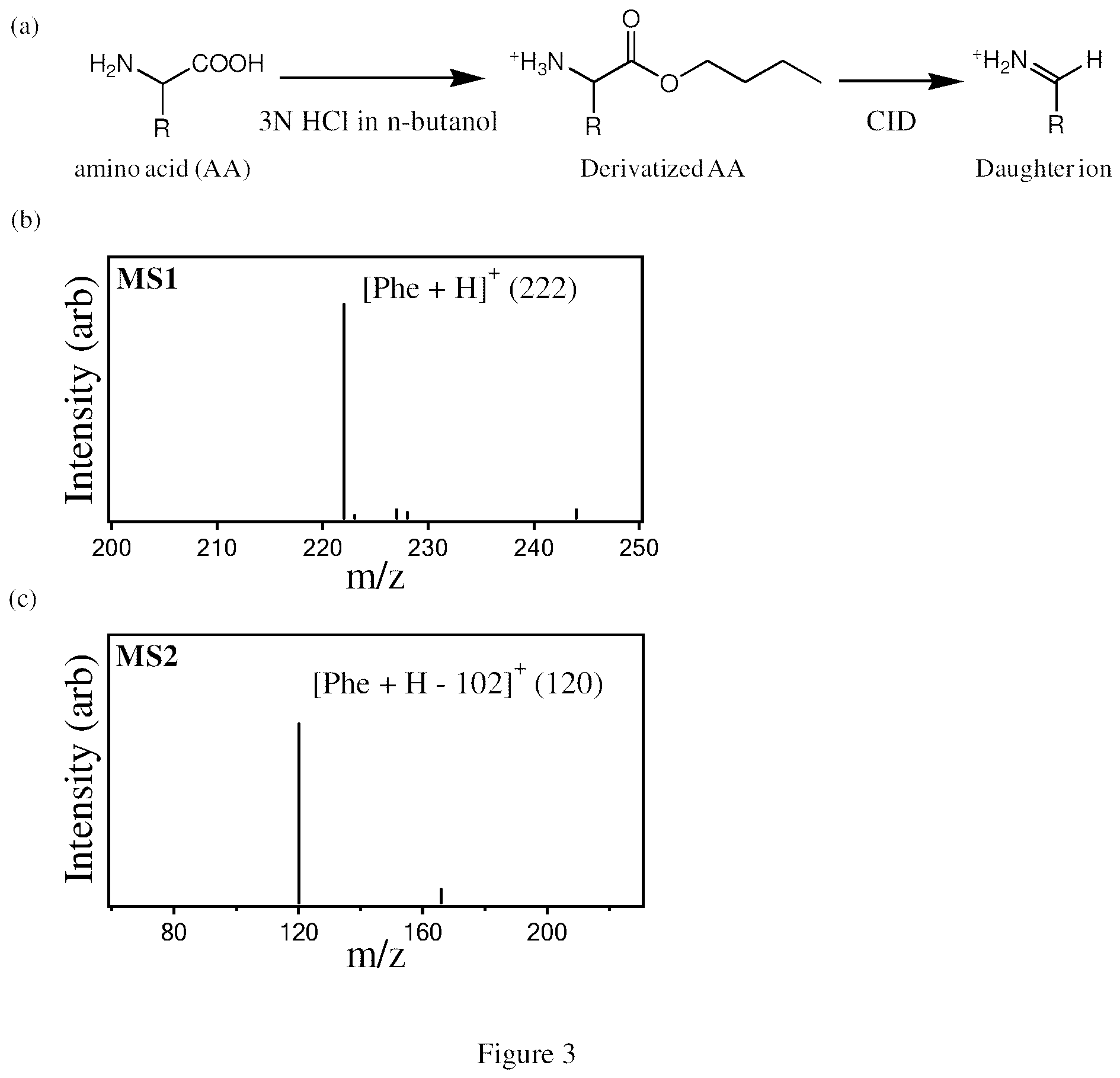 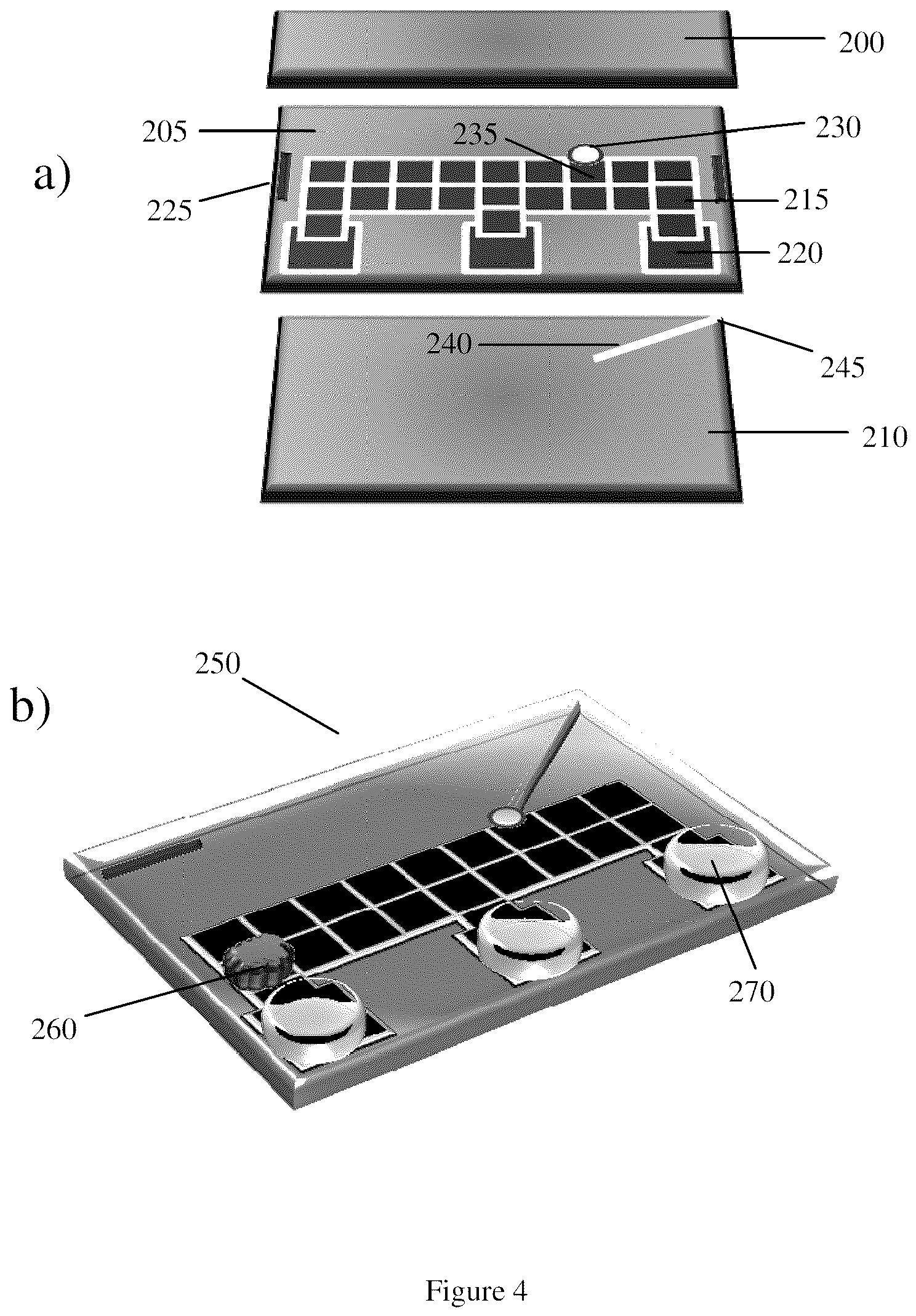 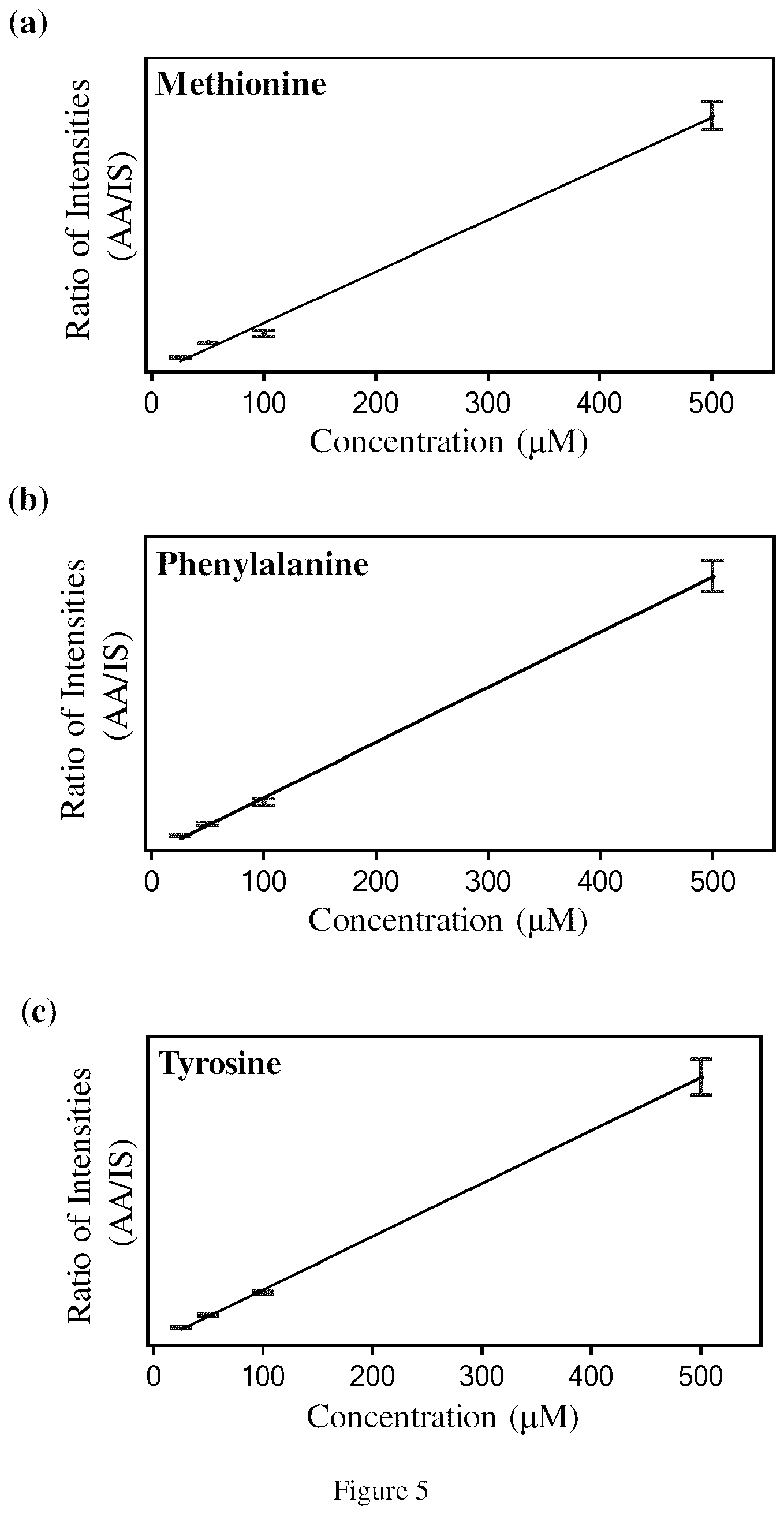 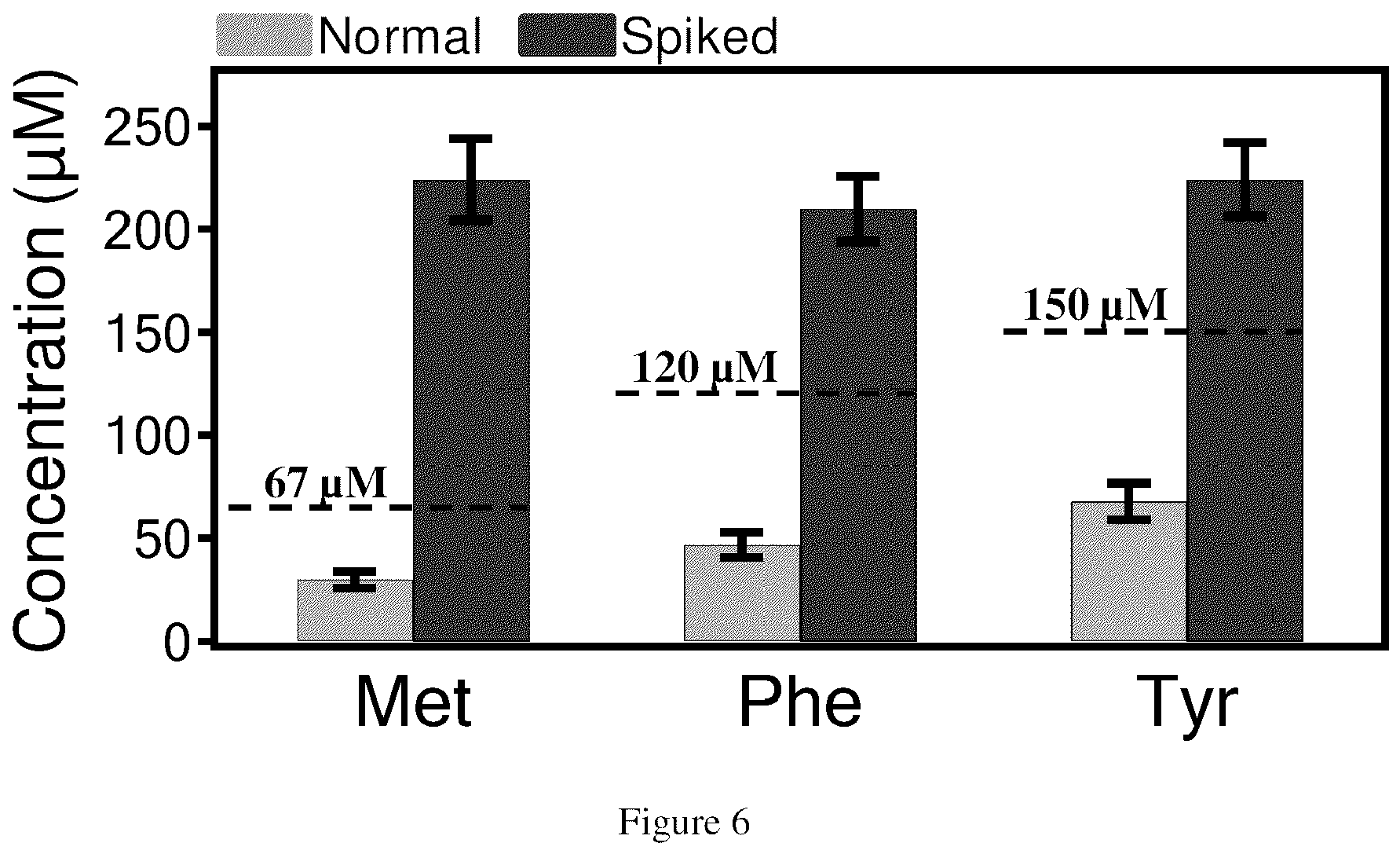 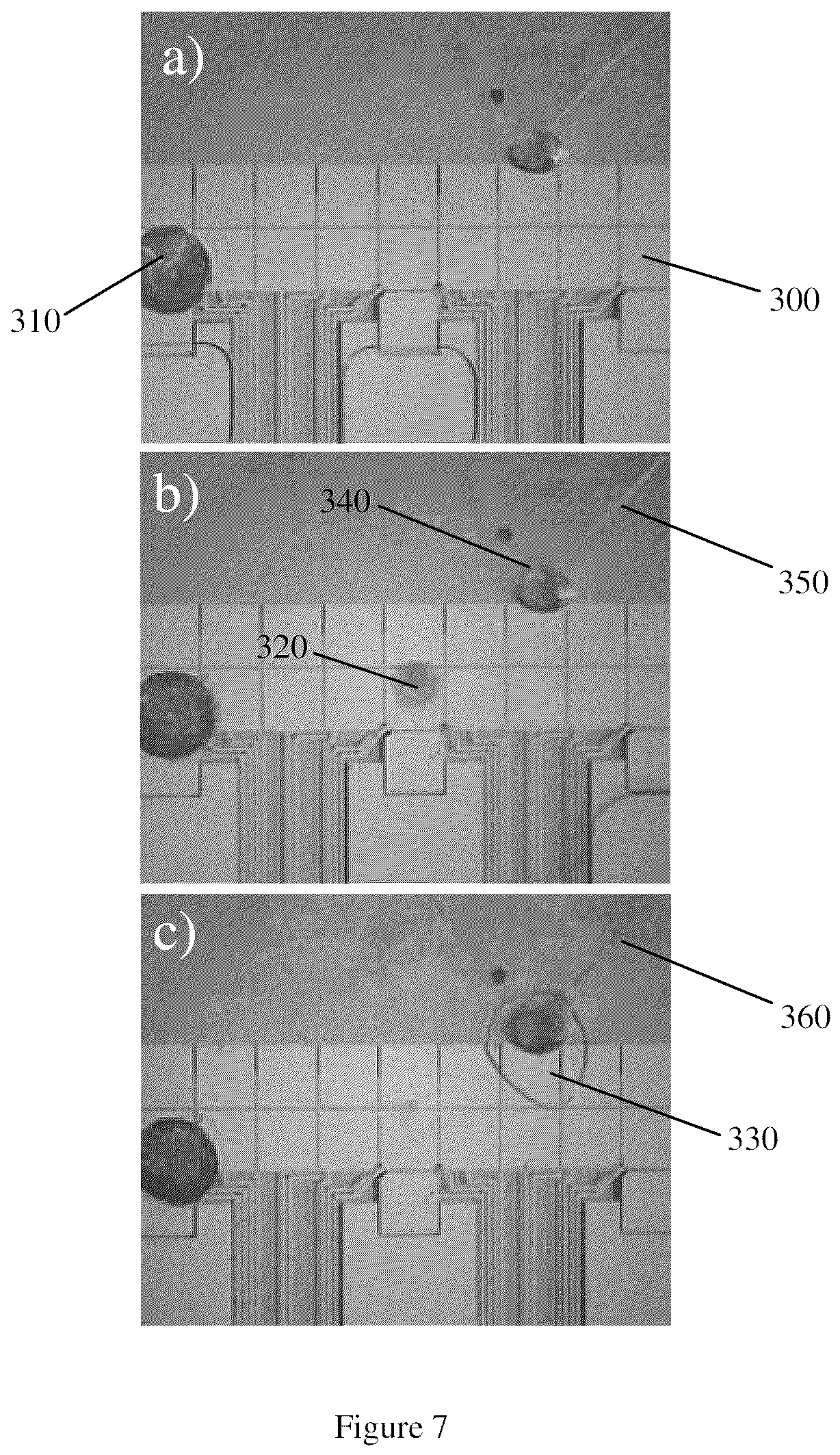 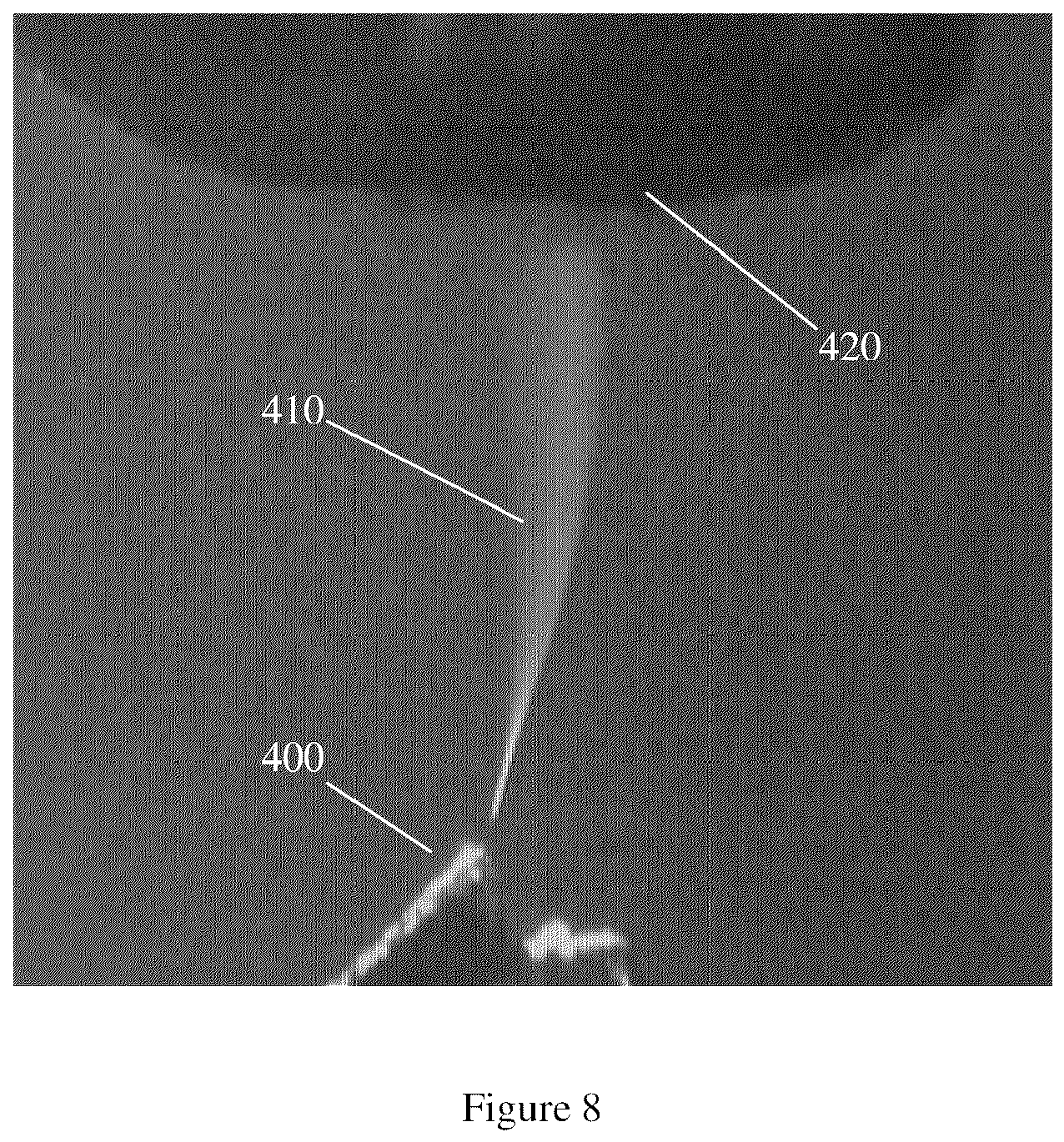 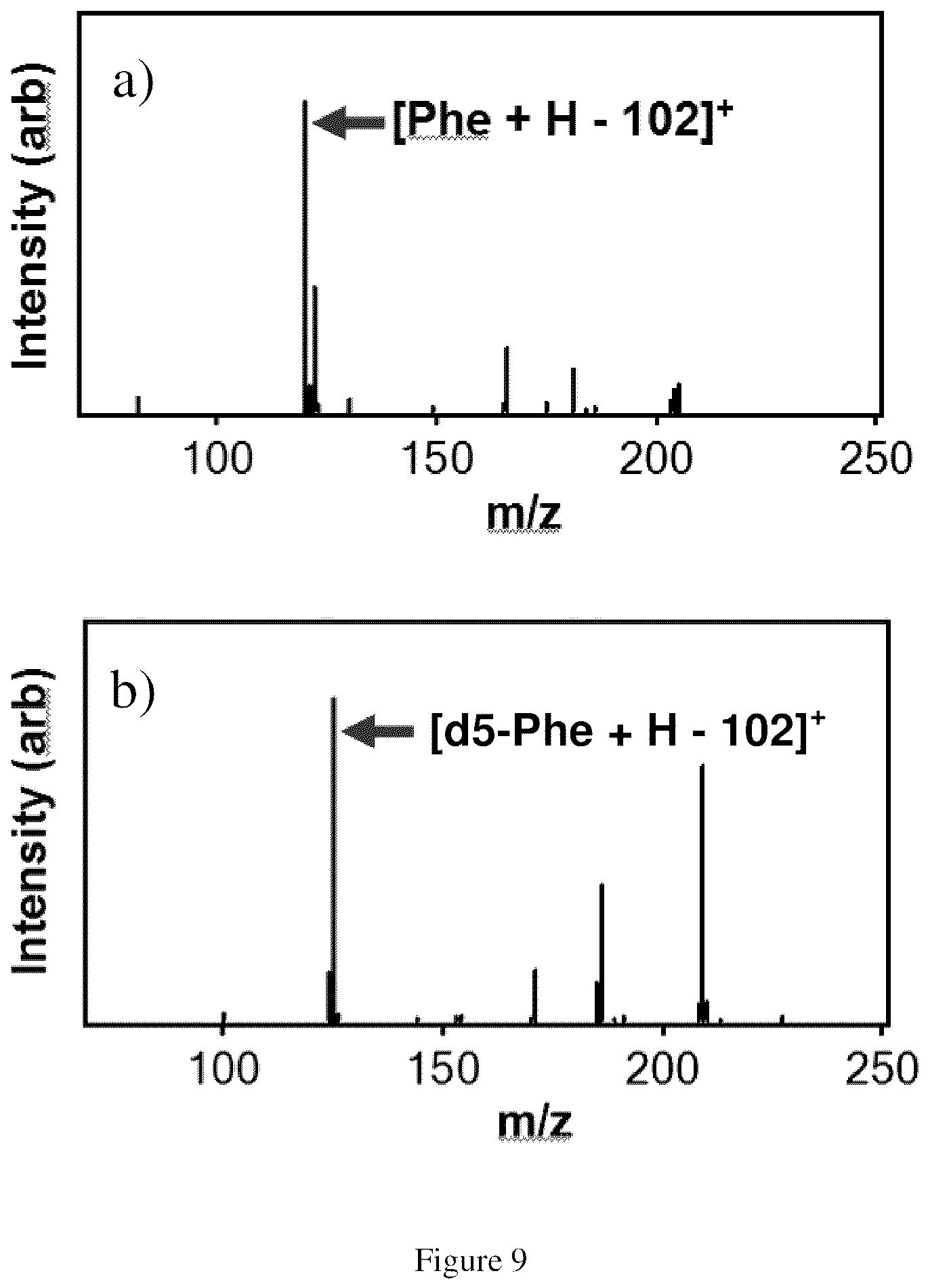 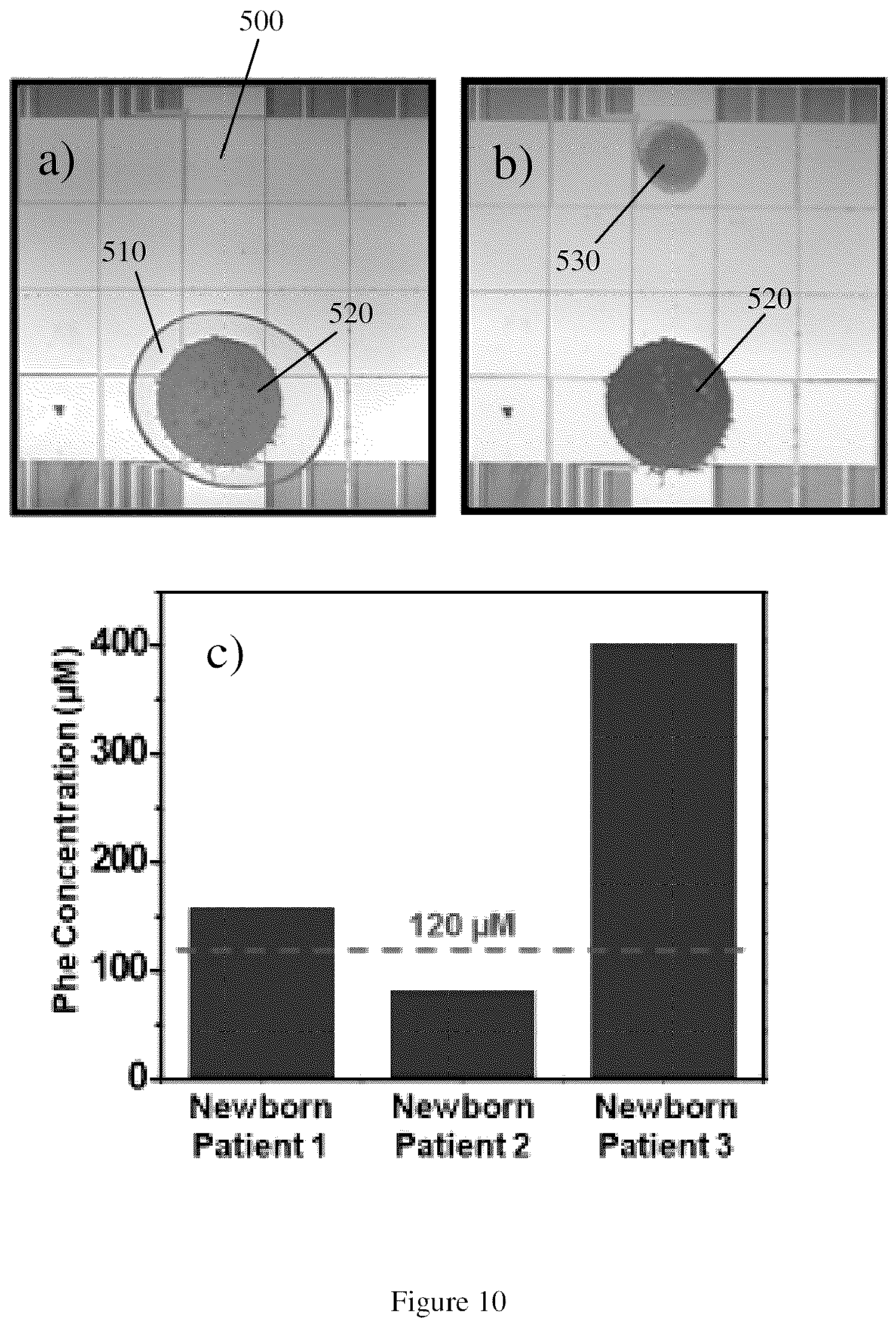