[0004] An autostereoscopic display device is described in GB 2196166 A. This known device comprises a two dimensional emissive liquid crystal display panel having a row and column array of display sub-pixels acting as an image forming arrangement to produce a display. An array of elongate lenticulars (lenses) extending parallel to one another overlies the display sub-pixel array and acts as an optical beam deflection arrangement. Outputs from the display pixels are projected through these lenticulars, which lenticulars operate to form the outputs into a plurality of views.
[0005] In accordance with general definition and for purpose of the present invention a pixel is meant to represent the smallest unit of a display panel for representing an image point. Thus in color displays a pixel is able to provide all colors to an image point and may therefore be subdivided into sub-pixels representing elementary or primary colors such as red green and blue. Additional sub-pixels in the form of additional primary color sub-pixels or a white pixel may be present. For a monochrome display a sub-pixel thus corresponds to a pixel as there are no colors.
[0006] The optical view beam deflection arrangement of the GB 2196166 A is thus provided as a sheet of elements, each of which comprises an elongate semi-cylindrical lens element. The lenticulars extend in the sub-pixel column direction of the display panel, with each lenticular overlying a respective group of two or more adjacent columns of display sub-pixels. A focal point of each lens coincides approximately with a plane defined by the array of display pixels.
[0007] In an arrangement in which, for example, each lenticular is associated with two columns of display sub-pixels, the display sub-pixels in each column provide a vertical slice of a respective two dimensional sub-image. The lenticular sheet projects these two slices and corresponding slices from the display pixel columns associated with the other lenticulars, to the left and right eyes of a user positioned in front of the sheet, so that the user observes a single stereoscopic image. For the regular display panel pixel layout having columns of red, green and blue sub-pixels, three neighboring lenticulars in the row direction provide two views each having red and green and blue sub-pixel output.
[0008] In other arrangements, each lenticular is associated with a group of three or more adjacent display pixels in the row direction. Corresponding columns of display pixels in each group are arranged appropriately to provide a vertical slice from a respective two dimensional sub-image. As a user's head is moved from left to right a series of successive, different, stereoscopic views are observed creating, for example, a look-around impression.
[0009] The above described device provides an effective three dimensional display. However, it will be appreciated that the provision of stereoscopic views involves a necessary reduction in resolution, since each view is formed by a subset of the sub-pixels of the display panel. Furthermore, for a given display panel resolution, there is a trade off between the realistic perception of three dimensional depth, as determined by the number of views, and the resolution of each of the views.
[0010] It has been proposed to provide a display device which is switchable in use to function as a conventional two dimensional display device and an autostereoscopic display device. In such a device, the optical beam deflection arrangement is essentially switched between first and second modes. The first mode is a pass through mode in which light received by the arrangement is transmitted substantially without having its direction altered. The second mode is a view forming mode in which the light is directed in different directions to form the stereoscopic views. Use of the optical beam deflection arrangement in the first (pass through) mode is suited to applications favoring high display resolution, such as text display. Use of the arrangement in the second (view forming) mode is suited to applications favoring a three dimensional effect, such as video display.
[0011] A known switchable optical beam deflection arrangement is disclosed in international patent application WO1998/021620. It comprises an array of lenticulars arranged such that the lenticular surfaces are defined on one side by a birefringent material and on the other side by an optically isotropic material. The refractive index of the isotropic material is matched to the ordinary refractive index or to the extraordinary refractive index of the birefringent material so that light of a first polarization is not deflected by the lenses and light of a second polarization is deflected. The lens function can then be switched on and off by appropriately controlling the polarization of light received by or transmitted from the optical beam deflection arrangement. The birefringent material is typically a liquid crystal material.
[0012] US2009/0168187 A1 discloses a lens element comprising: a rear substrate having a front surface provided with a surface relief having a plurality of zones each capable of providing a lens effect; a front substrate disposed in front of the rear substrate and having a rear surface provided with a surface relief having a plurality of zones each capable of providing a lens effect, the zones of the surface reliefs provided on the rear substrate and the front substrate having the same spatial arrangement over the area of the lens element; and solid or liquid, isotropic, intermediate material disposed between the front surface of the rear substrate and the rear surface of the front substrate, the intermediate material having a refractive index different from the refractive index of each of the rear substrate and the front substrate. This construction reduces the degree of Fresnel reflection which would otherwise degrade the optical performance.
[0013] There is a need for an improved optical beam deflection arrangement, to be used in e.g. multi view displays in terms of optical performance when it contains a liquid and/or gaseous layer.

[0041] Specific embodiments of the invention will now be described, with reference to the accompanying drawings, in which:

Fig. 1 is a schematic view of a known auto stereoscopic display device;

Fig. 2 is a schematic cross sectional view of the display device shown in Fig. 1 for explaining its principle of operation;

Fig. 3 is a schematic cross sectional view showing a view forming arrangement on which the invention is based;

Fig. 4 is a view showing a portion of Fig. 3 in greater detail;

Figs. 5a and 5b are schematic views of the configuration of a first view forming arrangement according to the invention;

Figs. 6a and 6b are schematic views of the configuration of a second view forming arrangement not covered by the present invention;

Figs. 7a and 7b are schematic views of the configuration of a third view forming arrangement not covered by the present invention;

Figs. 8A to 8F show cross sections of spacers that are beneficial for spacing the substrate from the lenses of the first layer; and

Fig. 9 is a schematic view of an autostereoscopic display device which includes a view forming arrangement according to the invention.

1. A multi-view display device for providing multiple views to one or more viewers, the device comprising:

an image forming arrangement (25) having an array of display pixels for producing a display; and

a substrate (27) formed of a solid material having a substrate surface;

a first layer (29) formed of an optically transparent solid material, having a first refractive index and having an optical beam deflection surface at least partly defined by a plurality of curved surfaces 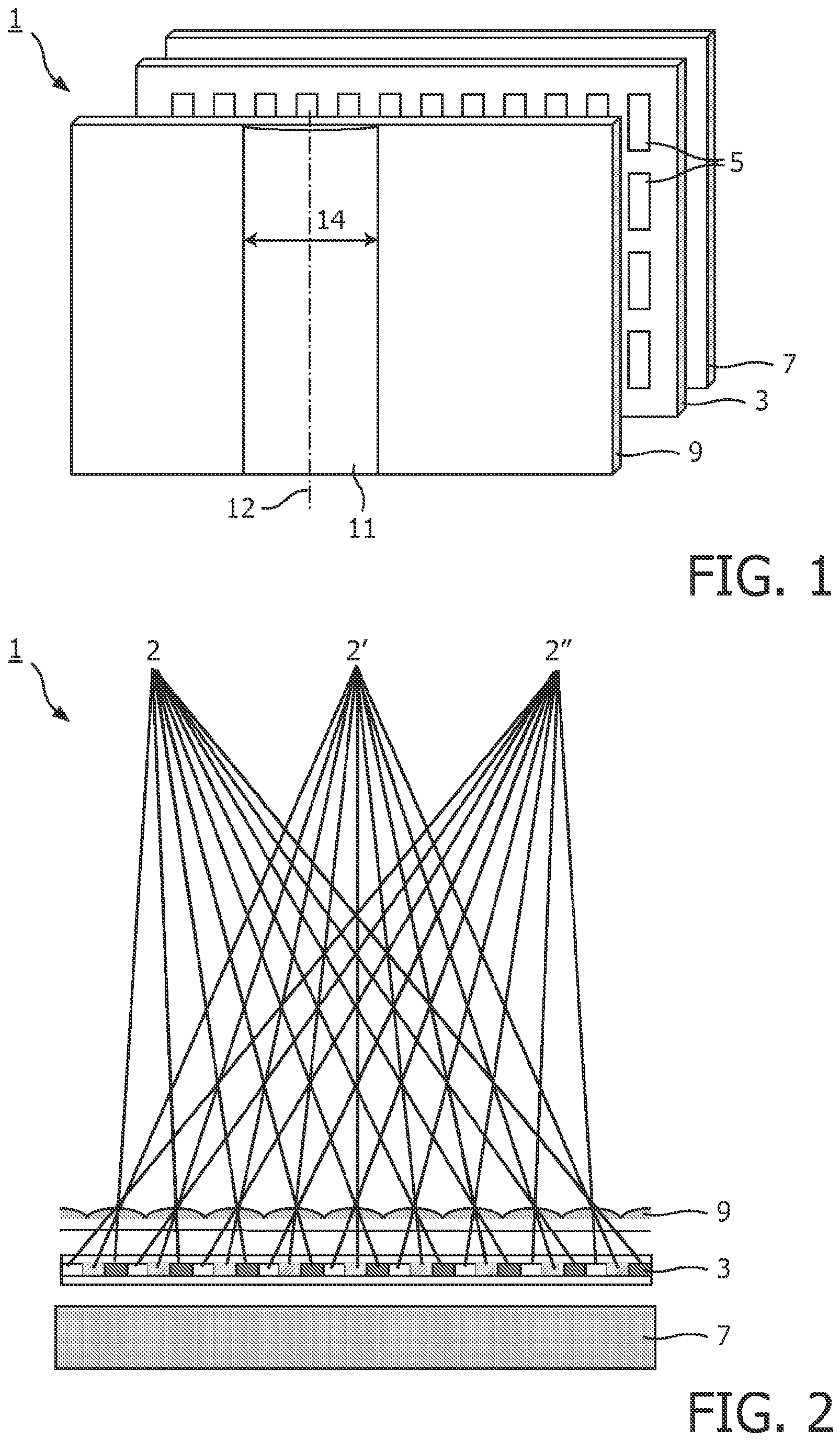 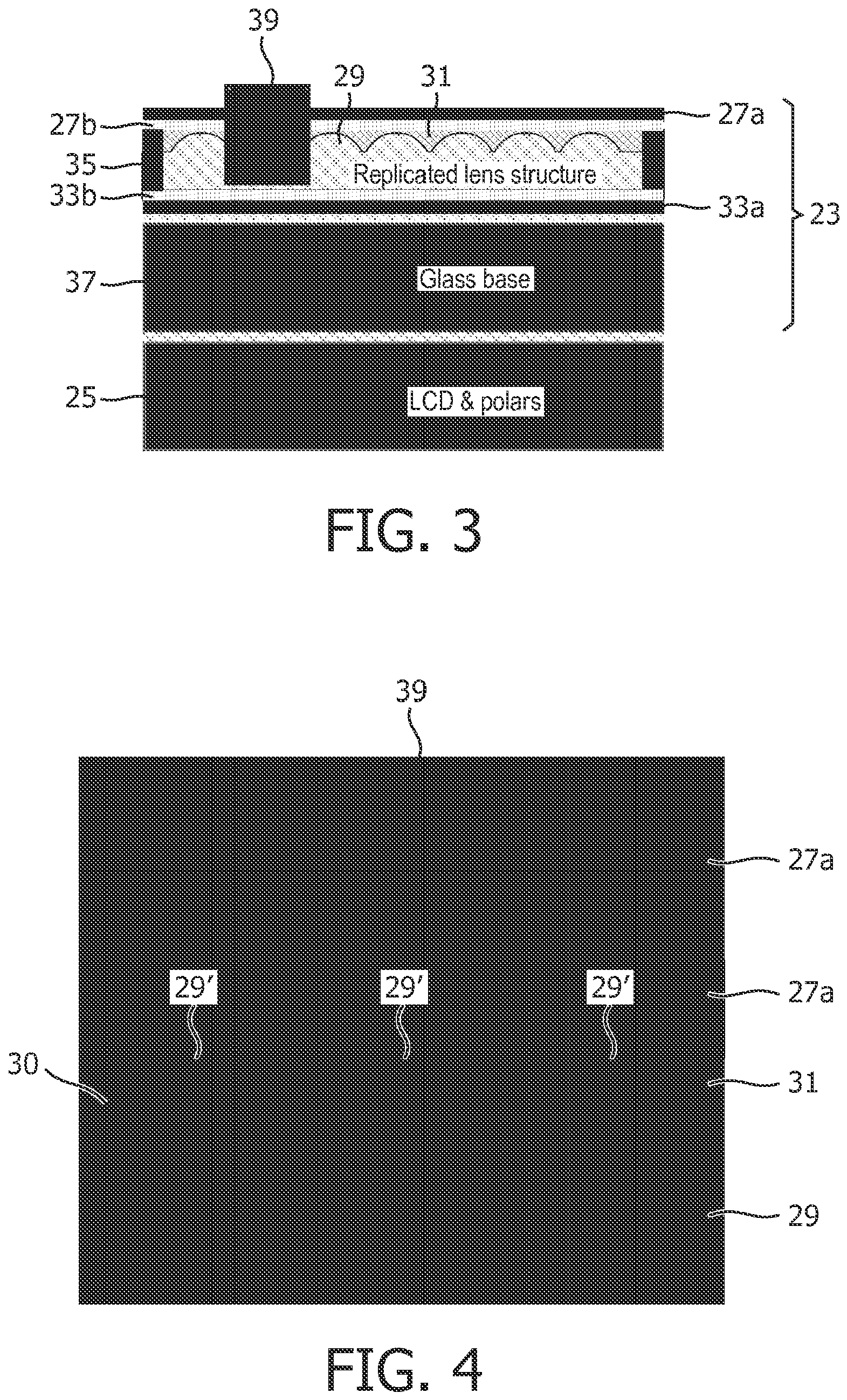 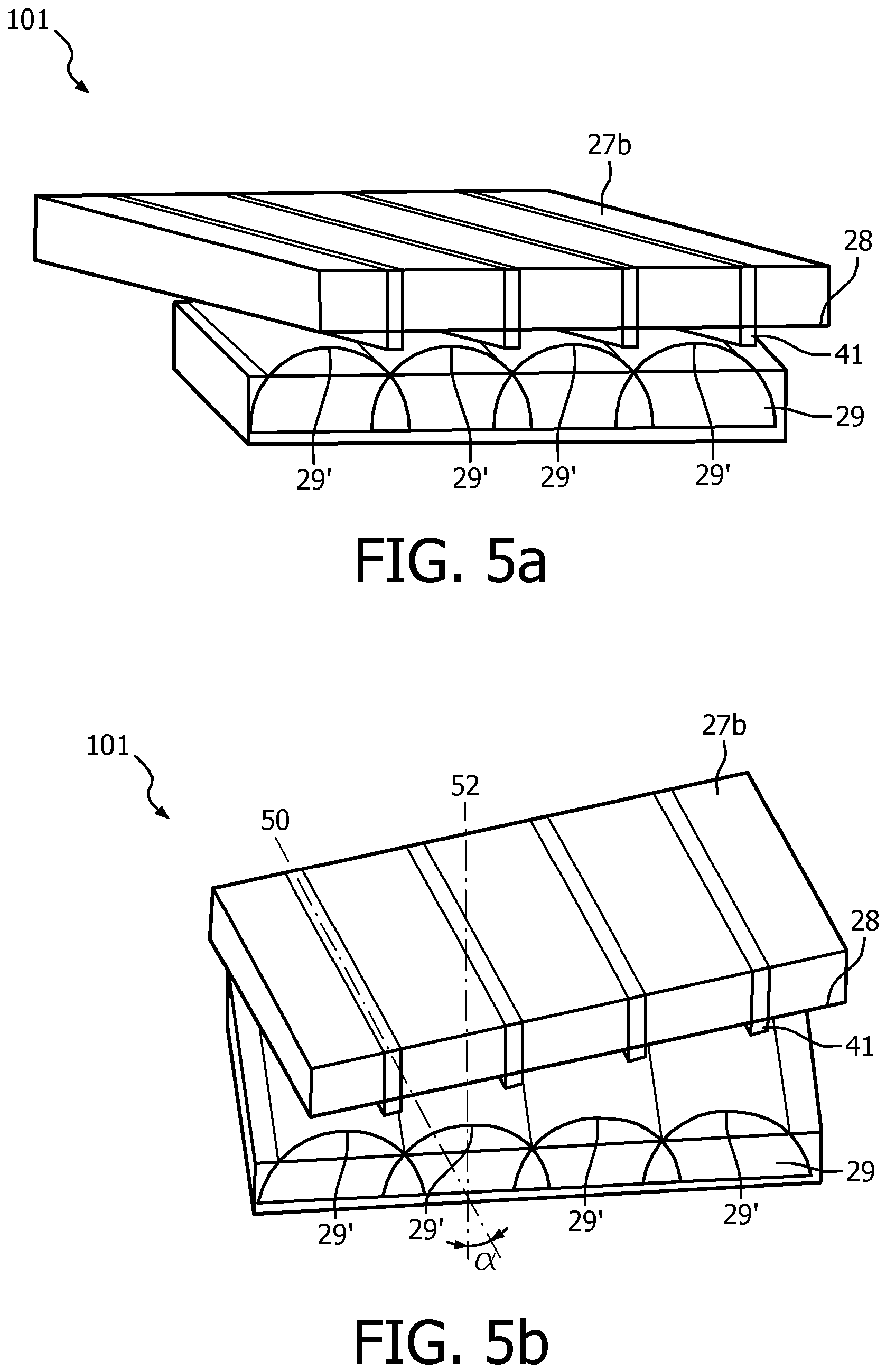 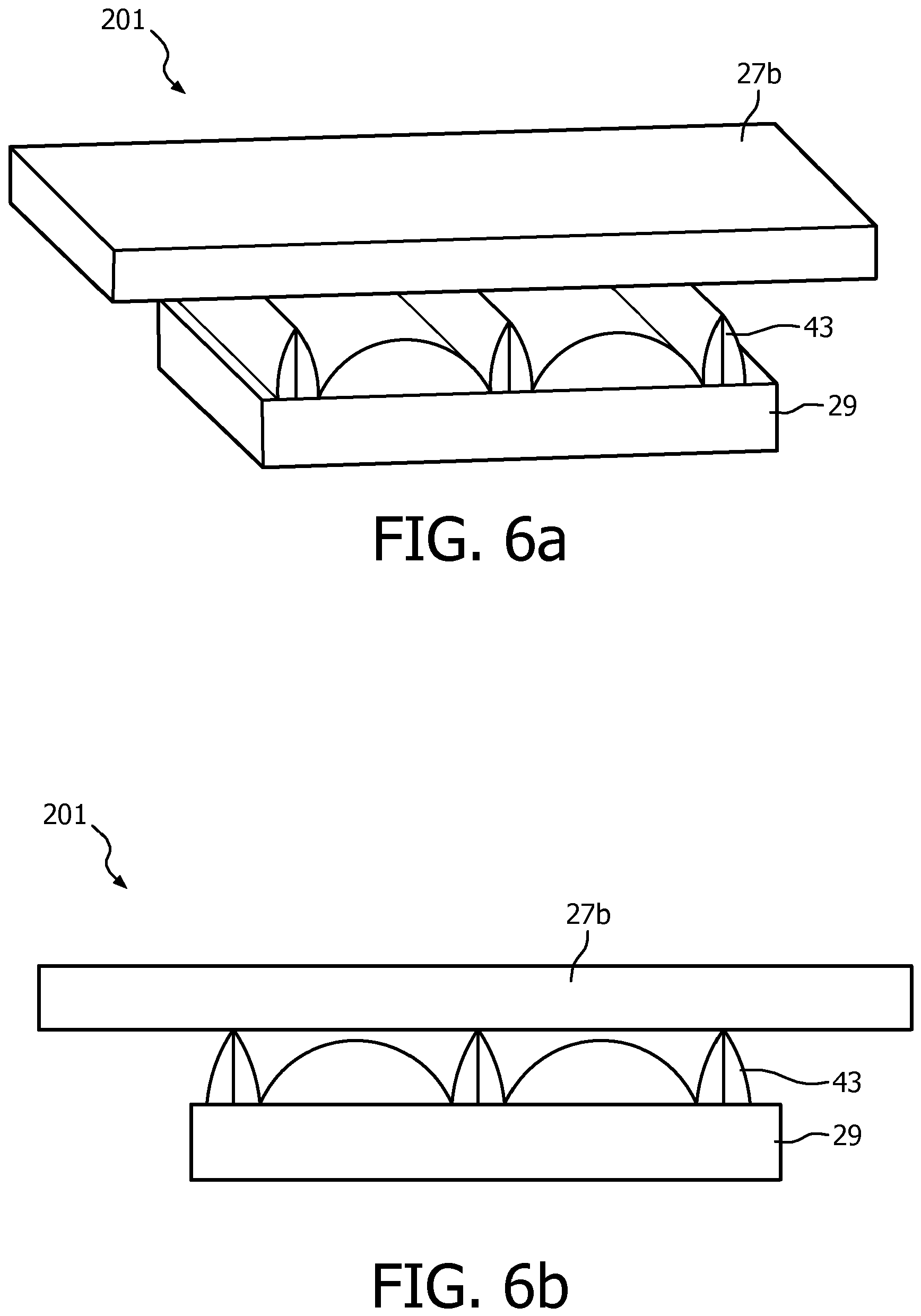 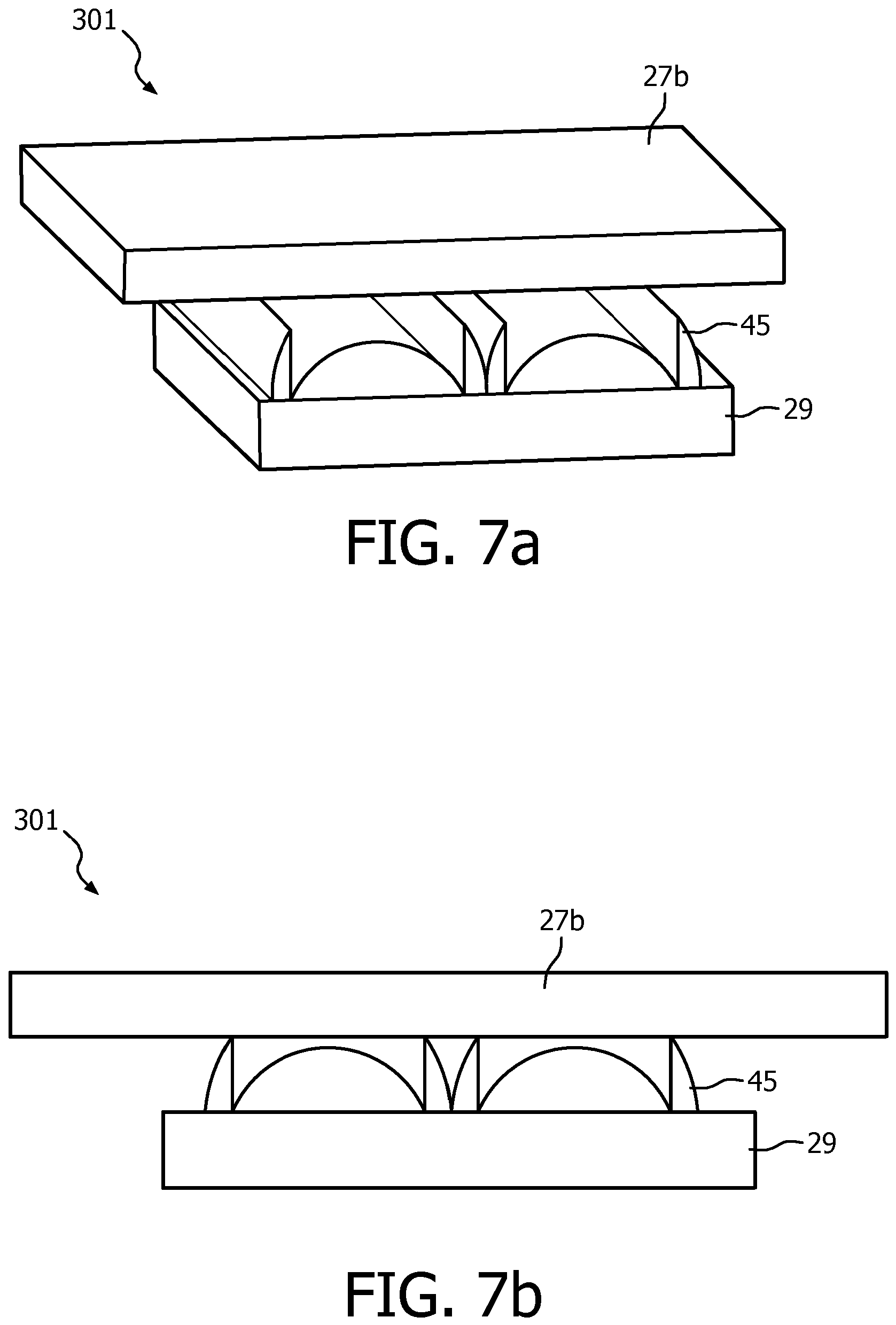 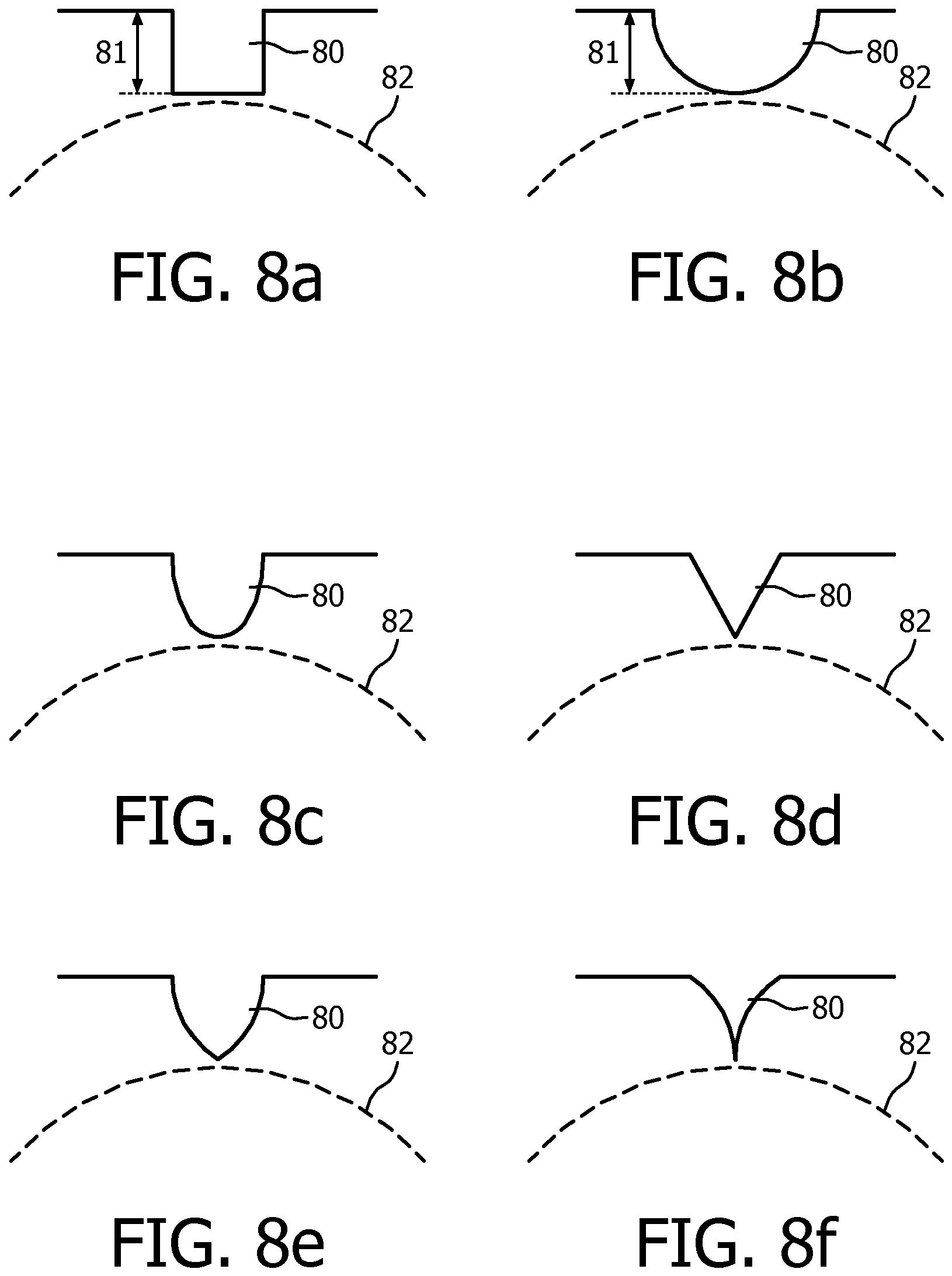 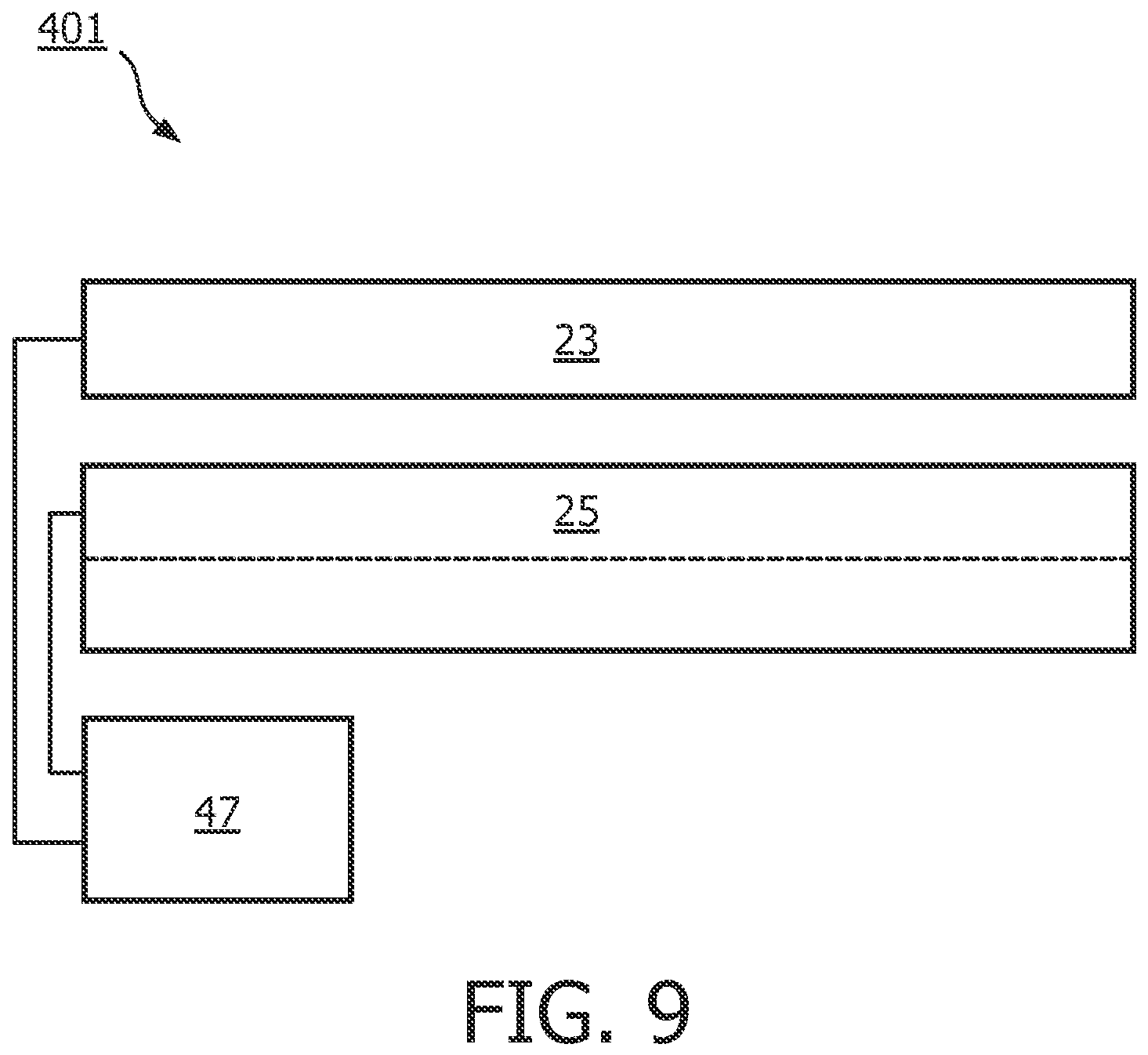