[0001] The present invention is directed in general to communications systems and methods for operating same, and more particularly to efficient implementation of a hash algorithm on a processor.

[0002] In known wireless telecommunications systems, transmission equipment in a base station or access device transmits signals throughout a geographical region known as a cell. As technology has evolved, more advanced equipment has been introduced that can provide services that were not possible previously. This advanced equipment might include, for example, an E-UTRAN (evolved universal terrestrial radio access network) node B (eNB), a base station or other systems and devices. Such advanced or next generation equipment is often referred to as long-term evolution (LTE) equipment, and a packet-based network that uses such equipment is often referred to as an evolved packet system (EPS). An access device is any component, such as a traditional base station or an LTE eNB (Evolved Node B), that can provide a communication device, such as user equipment (UE) or mobile equipment (ME), with access to other components in a telecommunications system.
[0003] One issue that is present in many UE type devices relates to providing security such as via a hash algorithm. SHA-512 is a Hash algorithm from the second generation secure hash algorithm (SHA-2) family (see e.g., the FIPS180-3 hashing standard). It includes 80 rounds of repeated operations on a state consisting of eight 64-bit words. The implementation of SHA-512 on an advanced reduced instruction set computer (risc) machine type ARM processor, such as the ARMv5t architecture, is a challenging task since it comprises sixteen 32-bit registers of which one is the program counter (PC) and the other is the stack pointer (SP). Hence, the SHA-512 state cannot be entirely kept in the 14 working registers, only portions of it at a time would be loaded into them and undergo the necessary calculations before being stored back on the stack. The challenge lies in optimizing the registers utilization and minimizing the relatively lengthy load operations.
[0004] Lien R. et al.: "A 1 Gbit/s Partially Unrolled Architecture of Hash Functions SHA-1 and SHA-512," 30.01.2004, Topics of Cryptology - CT-RSA 2004, p. 324-338, XP019002819, describes a new hardware architecture for a family of dedicated hash functions, including American standards SHA-1 and SHA-512. Werner Koch: "libgcrypt/sha512.c at master. Chronic-Dev/libgcrypt. GitHub", 11.12.2009, XP055194944, describes computer code in relation to SHA384 and SHA512 hash functions.

[0005] The present invention may be understood, and its numerous objects, features and advantages obtained, when the following detailed description is considered in conjunction with the following drawings, in which:

Figure 1 shows a block diagram of a flow of computation in a hash algorithm.

Figure 2 depicts an exemplary system in which the present invention may be implemented.

Figure 3 shows a wireless communications system including an embodiment of a user equipment (UE).

Figure 4 is a simplified block diagram of an exemplary UE comprising a digital signal processor (DSP).

Figure 5 is a simplified block diagram of a software environment that may be implemented by the DSP.

[0006] A method, system and computer-usable medium are provided for maximizing the number of registers at the end of an iteration that contain values to be used at the beginning of the following iteration. This is achieved by categorizing the SHA-512 algorithm iterations into even and odd iterations, where the sequence of computation in the even iteration is reversed in the odd iteration. Hence an even and an odd iteration form together a new iteration of the loop. Furthermore, the capabilities of some more advanced architectures such as the ARMv5te are leveraged, including data preloading and doubleword loading/storing by carefully assigning the state words to the registers.
[0007] More specifically, in certain embodiments, the present invention includes categorizing, and unrolling iterations of SHA-512, and similarly SHA-384, into even and odd iterations, where the sequence of computation in the even iteration is reversed in the odd iteration. Hence an even and an odd iteration form together a new iteration of the loop. Additionally, in certain embodiments, some of the state words that are readily found in registers at the end of one iteration are reused at the beginning of the following iteration. Additionally, in certain embodiments, in the last 64 iterations, the offset is kept constant between the location of the current 8 state words and the pointer to the current w word, which is one of the 16 w words where the input block was originally copied in the stack and are constantly being updated. Additionally, in certain embodiment, each 16 iterations are grouped together and are governed by a counter which stores the index of the current w and is used to determine the locations of the other w words and to check for loop termination. Additionally, in certain embodiments, register pairs R (d), R (d+1) are assigned to the algorithm 64-bit words when loading/storing them, where d is even and not equal to 14, in order to leverage load/store doubleword instructions if available on the target processor.
[0008] Various illustrative embodiments of the present invention will now be described in detail with reference to the accompanying figures. While various details are set forth in the following description, it will be appreciated that the present invention may be practiced without these specific details, and that numerous implementation-specific decisions may be made to the invention described herein to achieve the inventor's specific goals, such as compliance with process technology or design-related constraints, which will vary from one implementation to another. While such a development effort might be complex and time-consuming, it would nevertheless be a routine undertaking for those of skill in the art having the benefit of this disclosure. For example, selected aspects are shown in block diagram and flowchart form, rather than in detail, in order to avoid limiting or obscuring the present invention. In addition, some portions of the detailed descriptions provided herein are presented in terms of algorithms or operations on data within a computer memory. Such descriptions and representations are used by those skilled in the art to describe and convey the substance of their work to others skilled in the art.
[0009] Referring now to Figure 1, a block diagram of a flow of computation in a hash algorithm is shown. More specifically, the computation performed per iteration of the SHA-2 family of hash algorithms is shown. In certain embodiments, a word is 64 bits long unless otherwise stated, while the processor registers are 32 bits long.
[0010] In SHA-512, as well as SHA-384 which is a truncated version of SHA-512, the state of every iteration includes eight 64-bit words A to H. The block to be hashed includes sixteen 64-bit words that are input to the algorithm through data-in during the first 16 iterations and stored in sequence in an array w. In the remaining 64 iterations, the function illustrated is calculated on 4 w words, w[j], w[j - 2], w[j - 7] and w[j - 15], and the result is used to update w[j] and contributes to the new state values A and E. Other contributing values to A and E are the 64-bit words Ki which are specified by the algorithm for each iteration i of the 80 iterations and the output of the functions Σ0, Maj, Σ1 and Ch that operate on the previous state value. Apart from A and E, the other new state values are a shifted copy from the previous state (i.e., old A becomes B, B becomes C, etc.). In the actual implementation, these values are not copied, but are stored on the stack, where adequate space is allocated to store the new A ahead of the old A, as shown in Figure 1. A pointer is advanced in each iteration.
[0011] Apart from the first iteration where the state values are initialized with zeros or the hash output of a previous run of the algorithm, the store instructions are only needed for w[j], A and E. Therefore, these values are updated in Figure 1 via solid arrows, while the other values are "updated" (renamed) with dashed arrows. This classical description is summarized in Pseudocode 1. 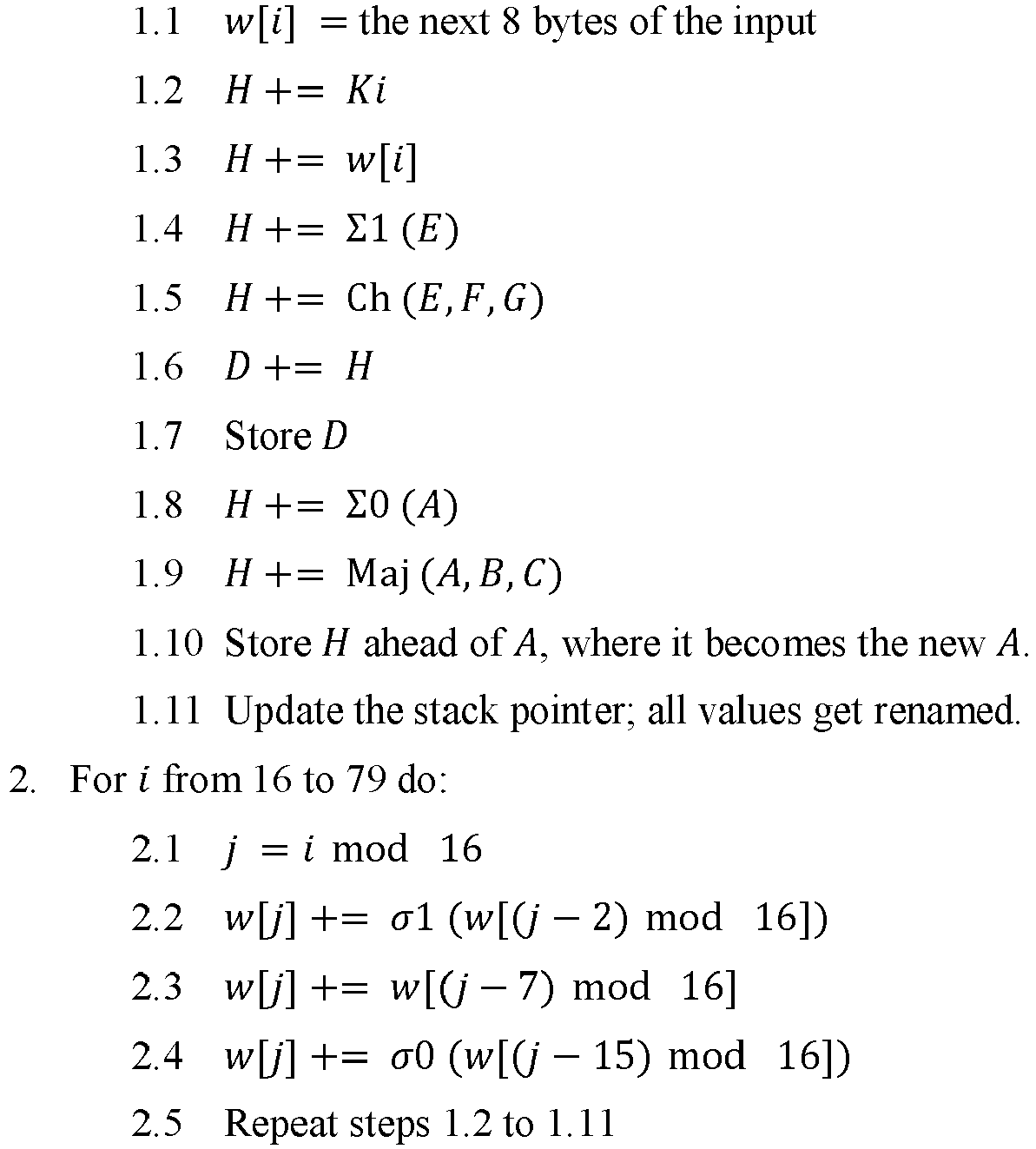 [0012] However, all the values A-H, Ki and the ws require load operations from the stack into the registers to undergo the specified functions. The present embodiment minimizes the number of load instructions required in every iteration by reusing values from the previous iteration that are still in the registers. This is achieved by categorizing, and unrolling, the algorithm iterations into even and odd ones, where the sequence of computation in the even iteration is reversed in the following odd iteration as explained in the following and summarized in Pseudocode 2. 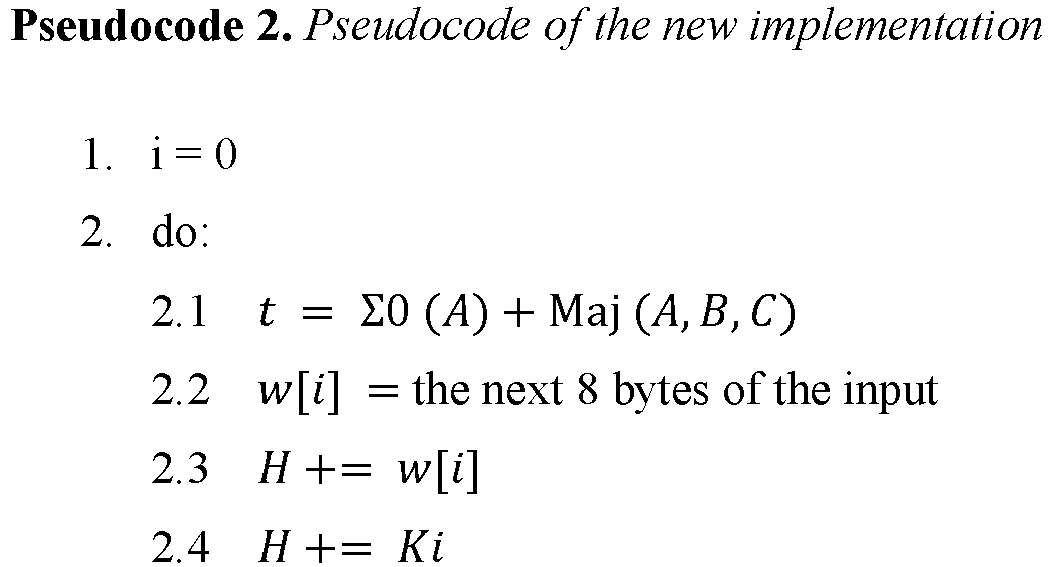 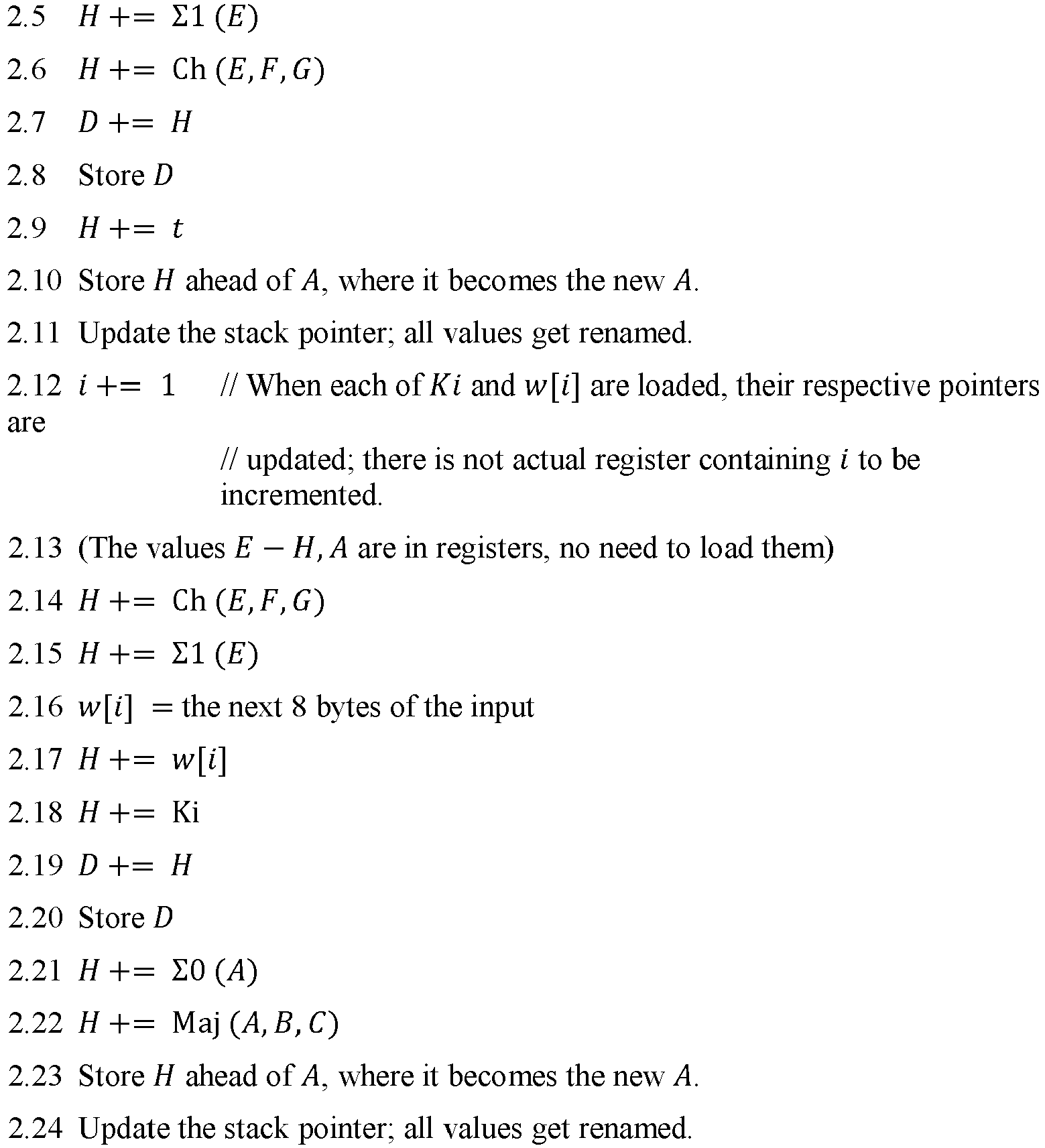 1. A method for maximizing a number of registers at an end of an iteration of a hash algorithm for use in a next iteration, wherein the secure hash algorithm comprises at least one of an SHA-512 algorithm and an SHA-384 algorithm implemented on an advanced reduced instruction set computer machine type ARM processor comprising sixteen 32-bit registers of which one is a program counter (PC), another is a stack pointer (SP) and 14 working registers, and a stack for storing values A-H representing the state words of the iteration, with an architecture including data preloading and doubleword loading/storing, the method comprising:

loading, from the stack in the registers, a set of stored values A-C;

computing and storing in a pair of registers a first value t= Σ0(A)+Maj(A,B,C) ;

loading, from the stack in the registers, the remaining values D-H;

computing using the first value t and the second value u and storing on the stack new values E and A, new values E-H and A being found in the registers;

reversing, in the odd iterations the sequence of computations in the even iterations by:

loading, from the stack in the registers, another set of values B-D;

combining an even iteration and an odd iteration to provide a new iteration of a loop. 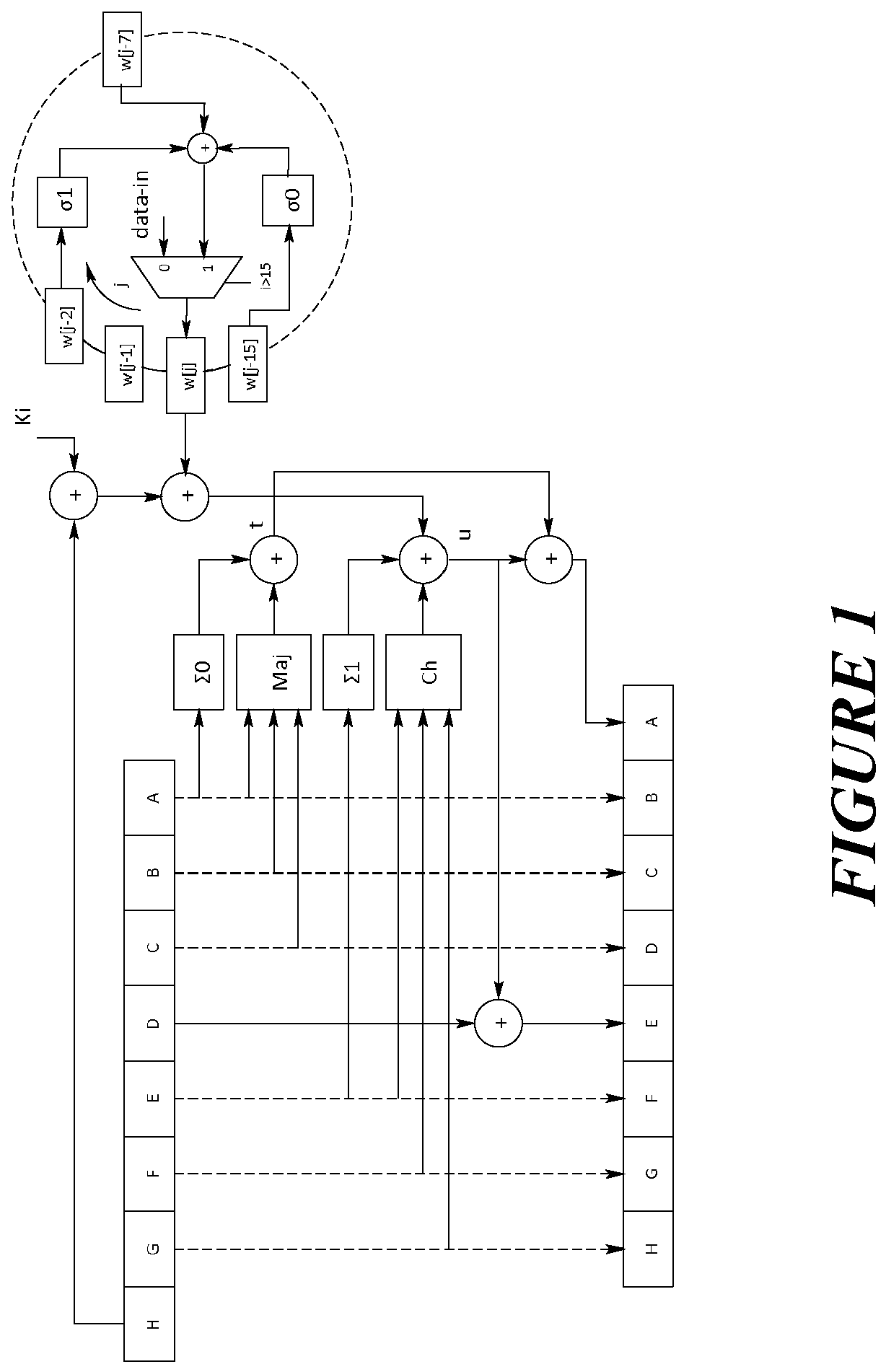 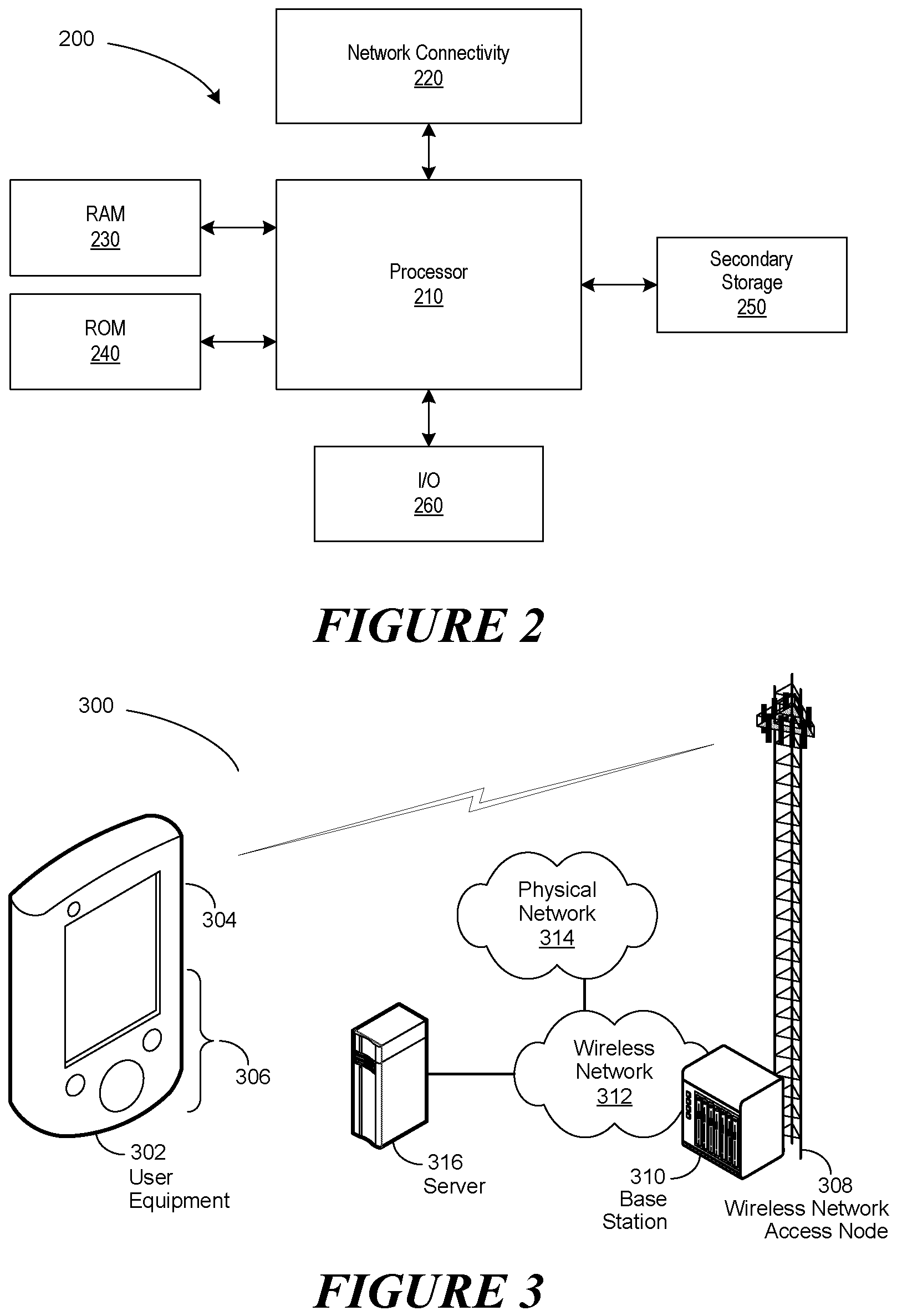 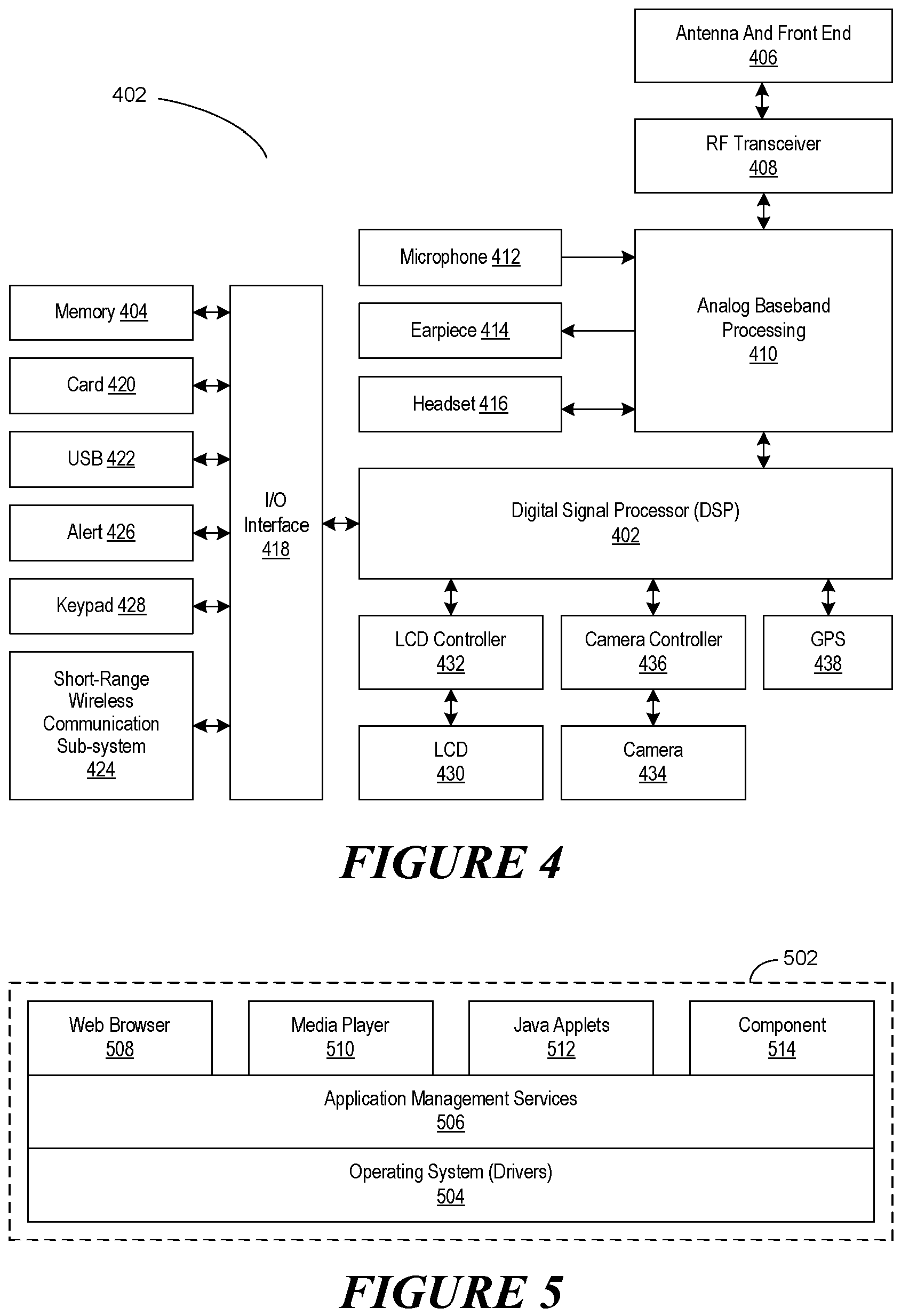