[0001] The present disclosure relates to a fluid pump. More particularly, an integrated motor, pump and controller assembly includes an internal coolant flow path to transfer heat from motor and the controller to the fluid being pumped.

[0002] This section provides background information related to the present invention.
[0003] A variety of motor driven fluid pumps have been controlled with switches or electronics positioned remotely from the motor and pump combination. Relatively unwieldy packaging and wire routing concerns may exist regarding the installation and use of these devices.
[0004] Other electric motor and pump combinations have been configured to include a controller positioned within the same or an adjacent housing. Robust operation becomes a concern due to possible overheating of the electronic components within the controller. Known designs are relatively large, costly and complex. Fluid pumps are known in the art from e.g. US 5 997 261 and EP 1 953 897. Accordingly, a need in the art may exist to define a simplified, low cost, low weight electric motor, pump and controller combination.

[0005] This section only provides a general summary of the invention. The full scope of the invention is solely defined by an electric pump defined in claim 1. Further preferred specifications are defined in the dependent claims.
[0006] Among other features, the inventive electric pump includes an outer housing having a motor cavity and a controller cavity separated by a partition wall. An inner housing is positioned within the motor cavity of the outer housing. One of the inner and outer housings includes radially extending ribs positioned adjacent to the other of the inner and outer housing to define a coolant flow path between the inner and outer housings. An electric motor is positioned within the inner housing and includes a stator and a rotor, where the rotor is fixed to a solid rotor shaft for driving a pump member. A cylindrical sleeve separates the stator and the rotor. An area between the sleeve and the rotor forms a portion of the coolant path and interconnects a volume between the inner and outer housings with a low pressure zone of the impeller cavity containing the pump member. A controller is positioned within the controller cavity in heat transfer relation with the partition wall.
[0007] Further areas of applicability will become apparent from the description provided herein. The description and specific examples in this summary are intended for purposes of illustration only and are not intended to limit the scope of the present disclosure.

[0008] The drawings described herein are for illustrative purposes only of selected embodiments and not all possible implementations, and are not intended to limit the scope of the present invention.

Figure 1 is an exploded perspective view of an electric water pump with stator cooling constructed in accordance with the teachings of the present disclosure;

Figure 2 is a cross-sectional view of the electric water pump;

Figure 3 is a fragmentary cross-sectional view showing an inner housing being inserted within an outer housing;

Figure 4 is a fragmentary cross-sectional view of the outer housing of the electric water pump assembly;

Figure 5 is a schematic depicting a coolant flow path between the inner and outer housings;

Figure 7 is a cross-sectional view taken through another alternate pump assembly, this pump assembly is according to the present invention;

Figure 8 is a fragmentary cross-sectional view taken along line 8-8 as shown in Figure 7;

Figure 9 is a partially exploded perspective view of the alternate pump;

Figure 11 is a fragmentary cross-sectional view illustrating portions of the coolant path; and

Figure 12 is a fragmentary perspective view depicting passages extending through a pump impeller.

[0009] Corresponding reference numerals indicate corresponding parts throughout the several views of the drawings.

an outer housing (302) including a motor cavity and a controller cavity separated by a partition wall;

a controller (349) positioned within the controller cavity in heat transfer relation with the partition wall. 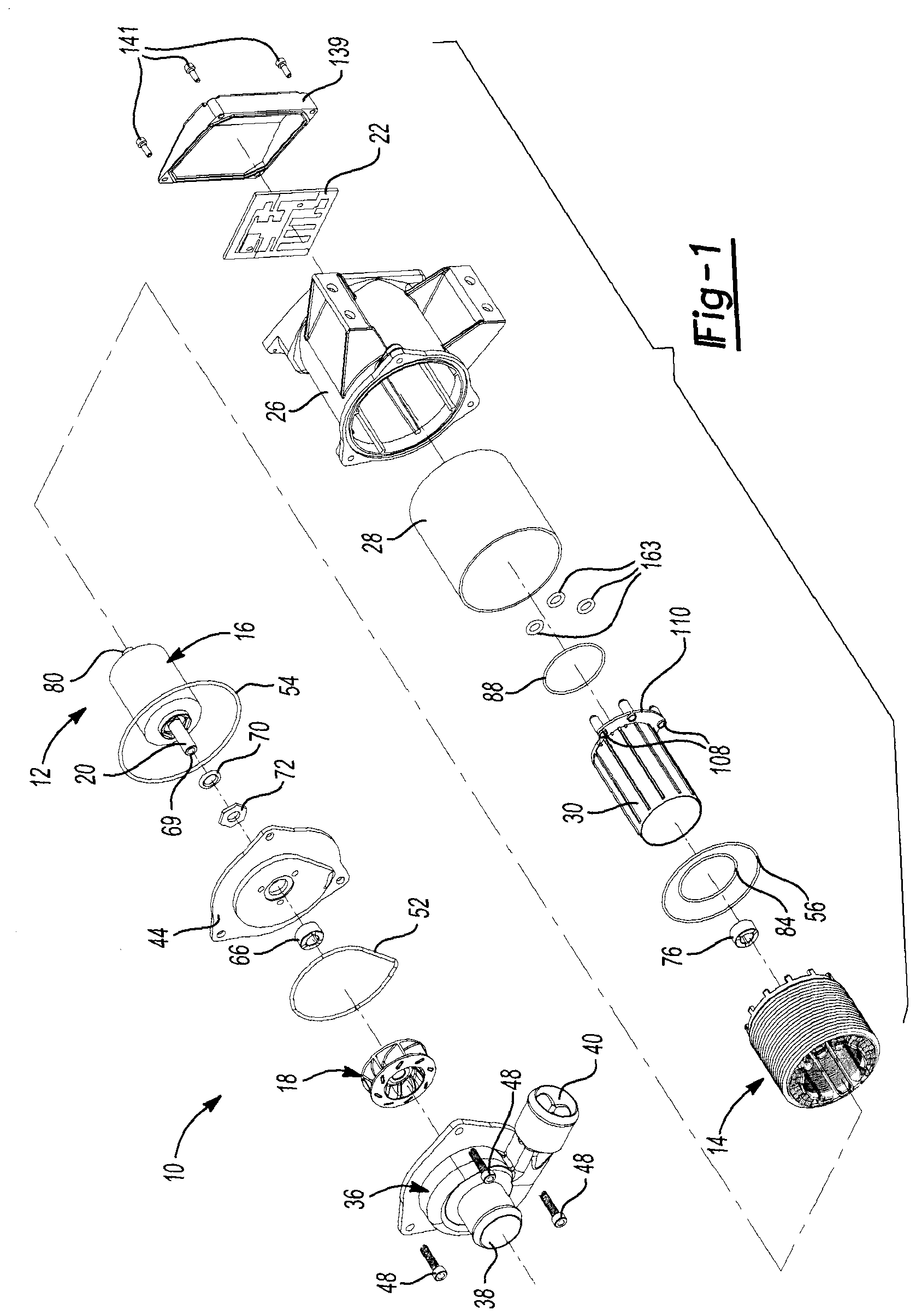 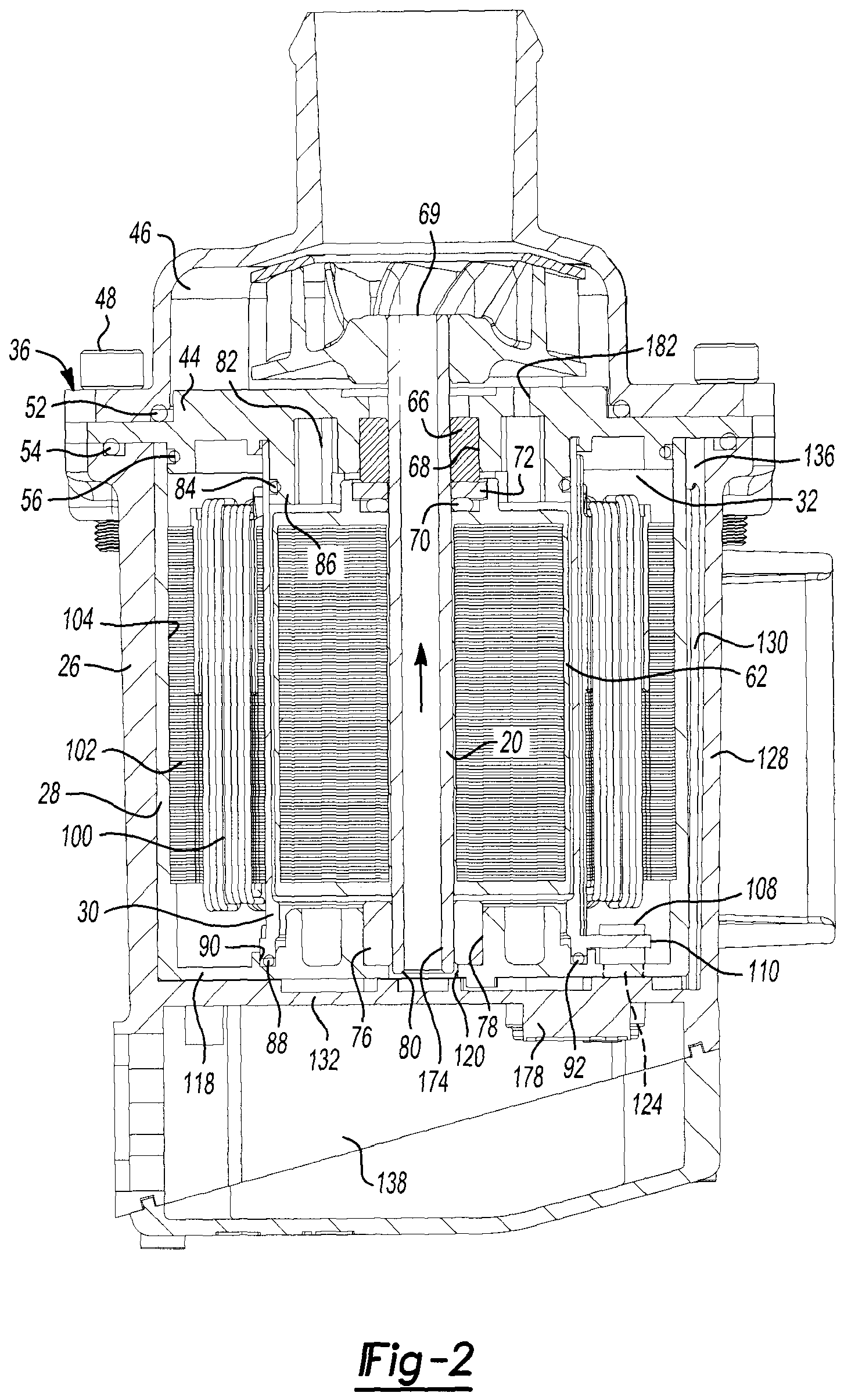 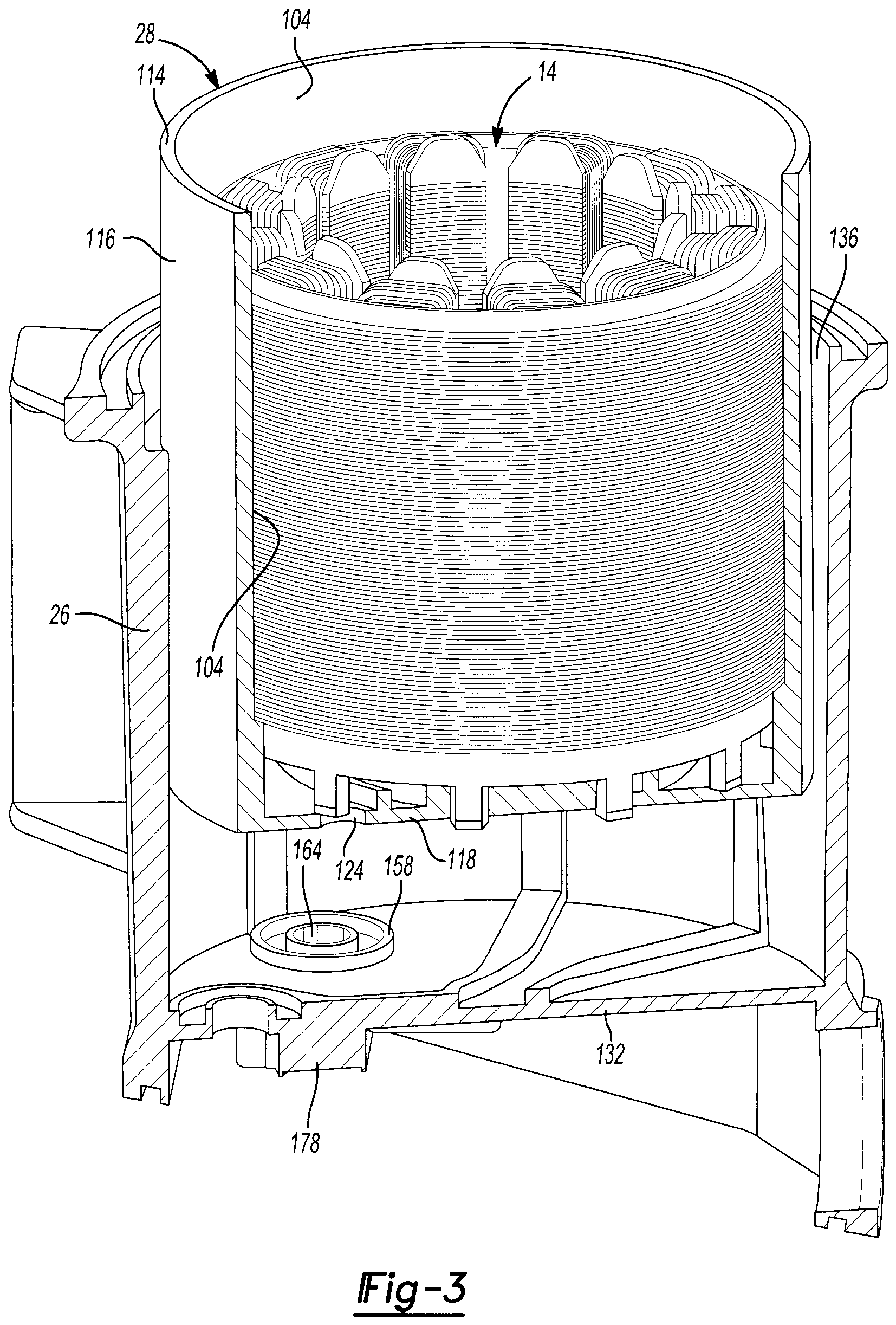 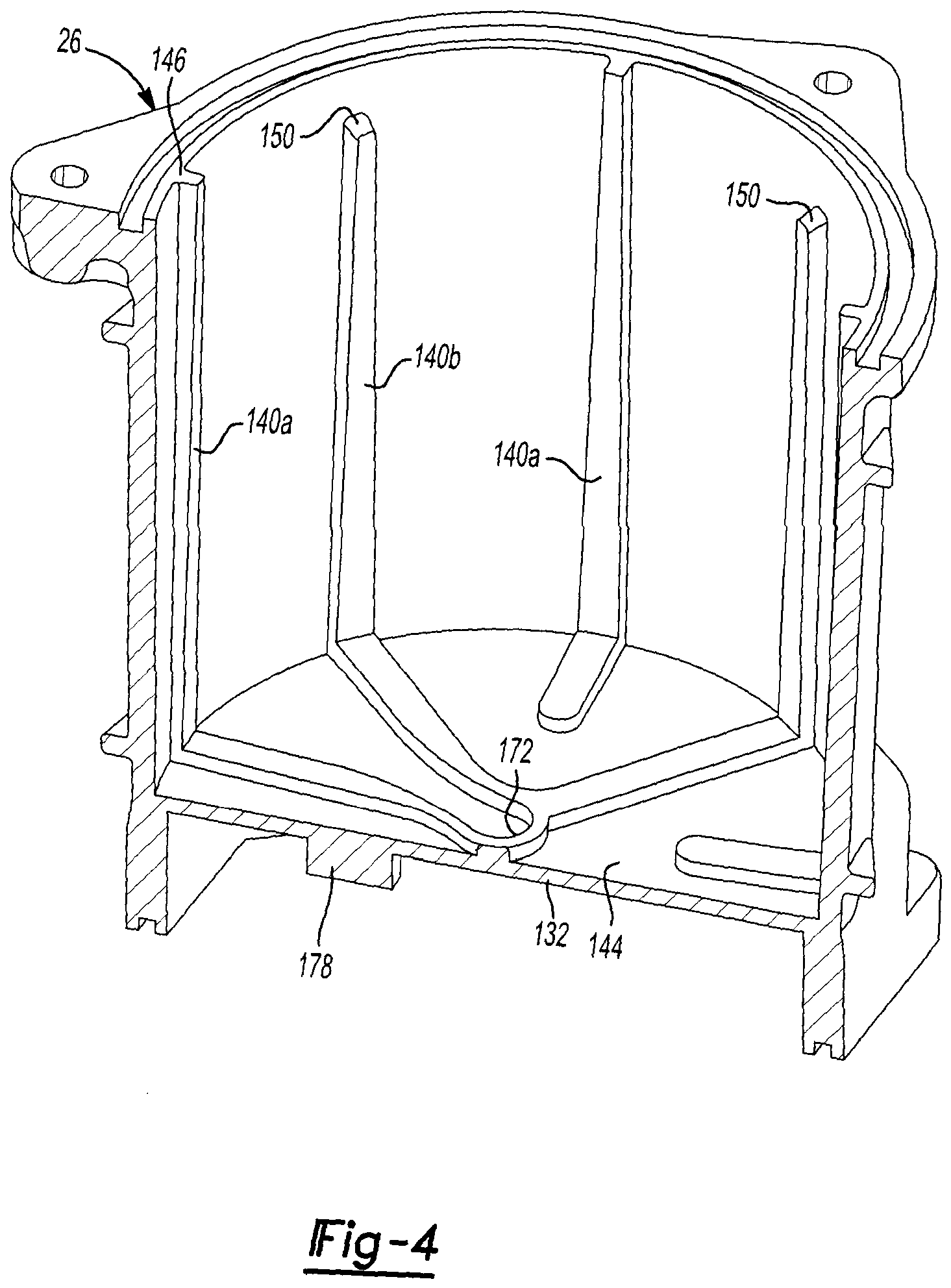 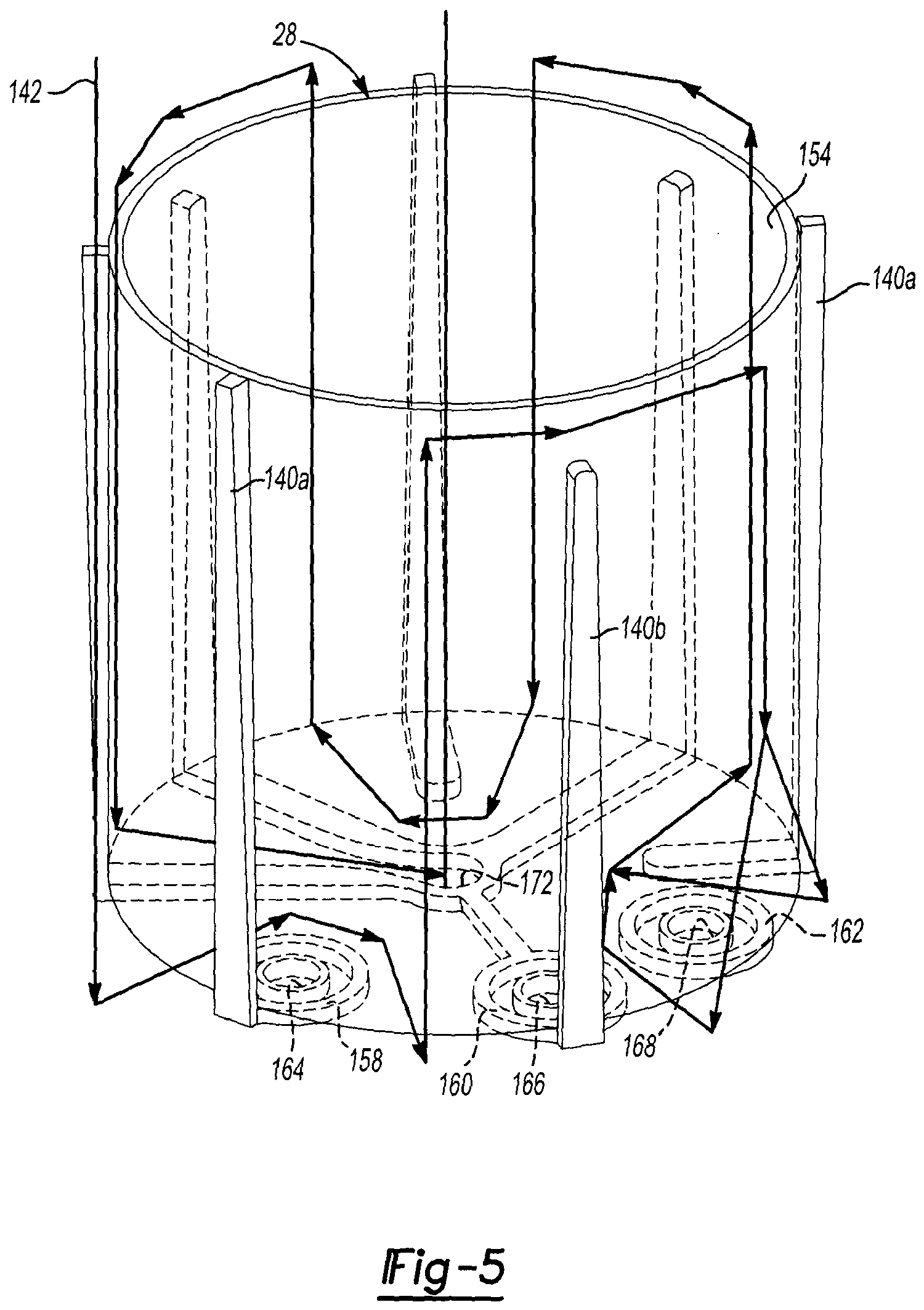 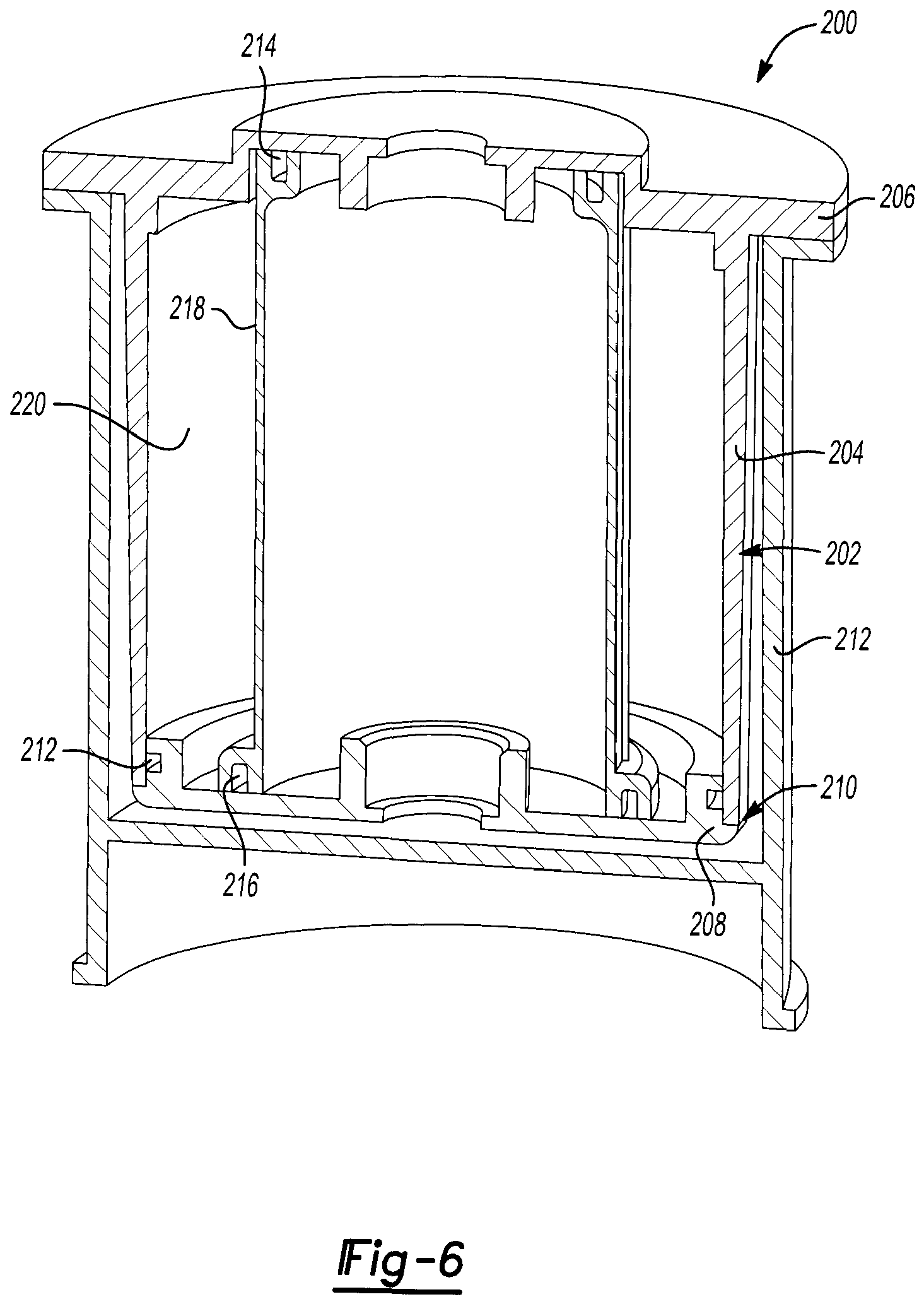 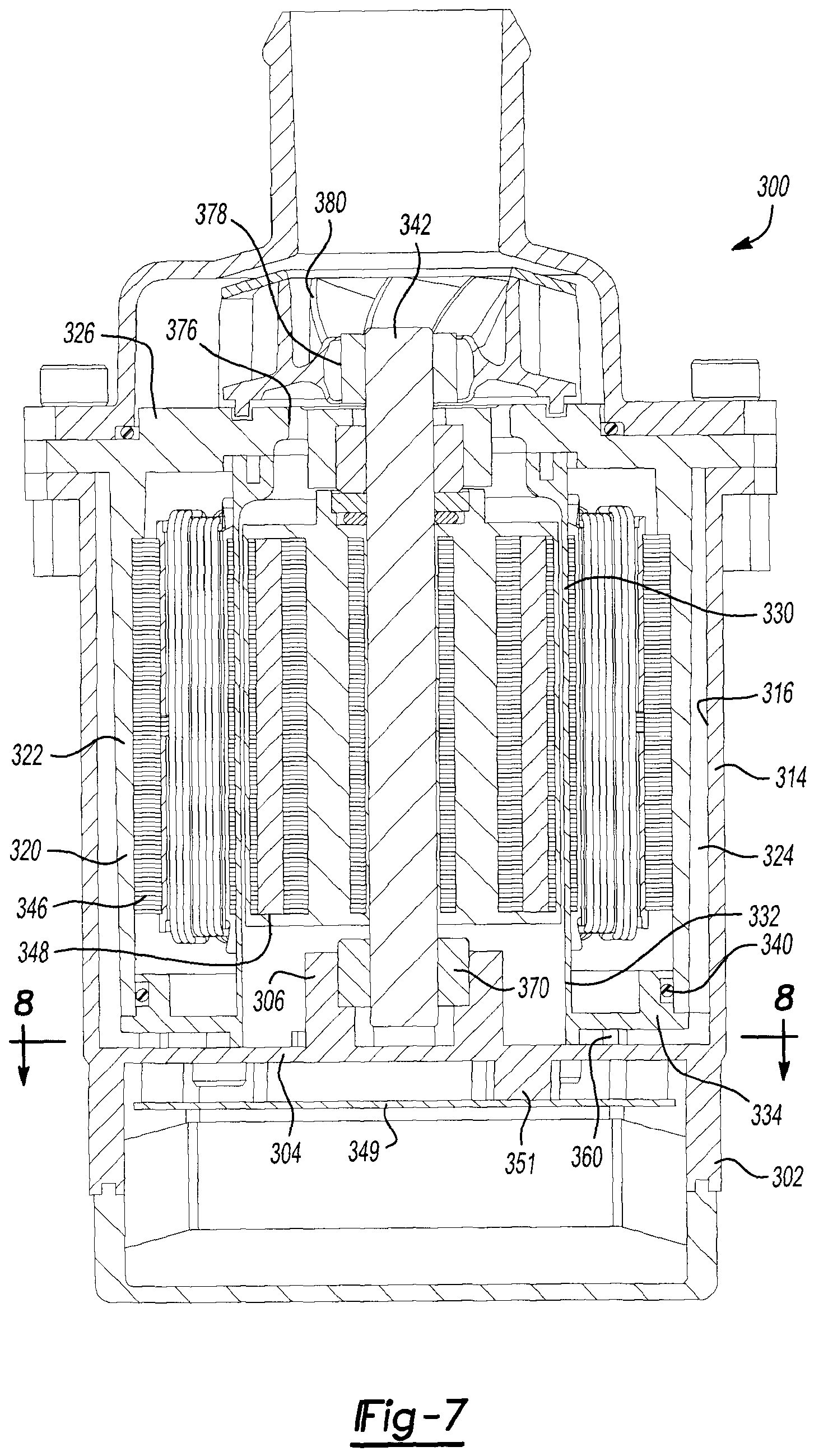 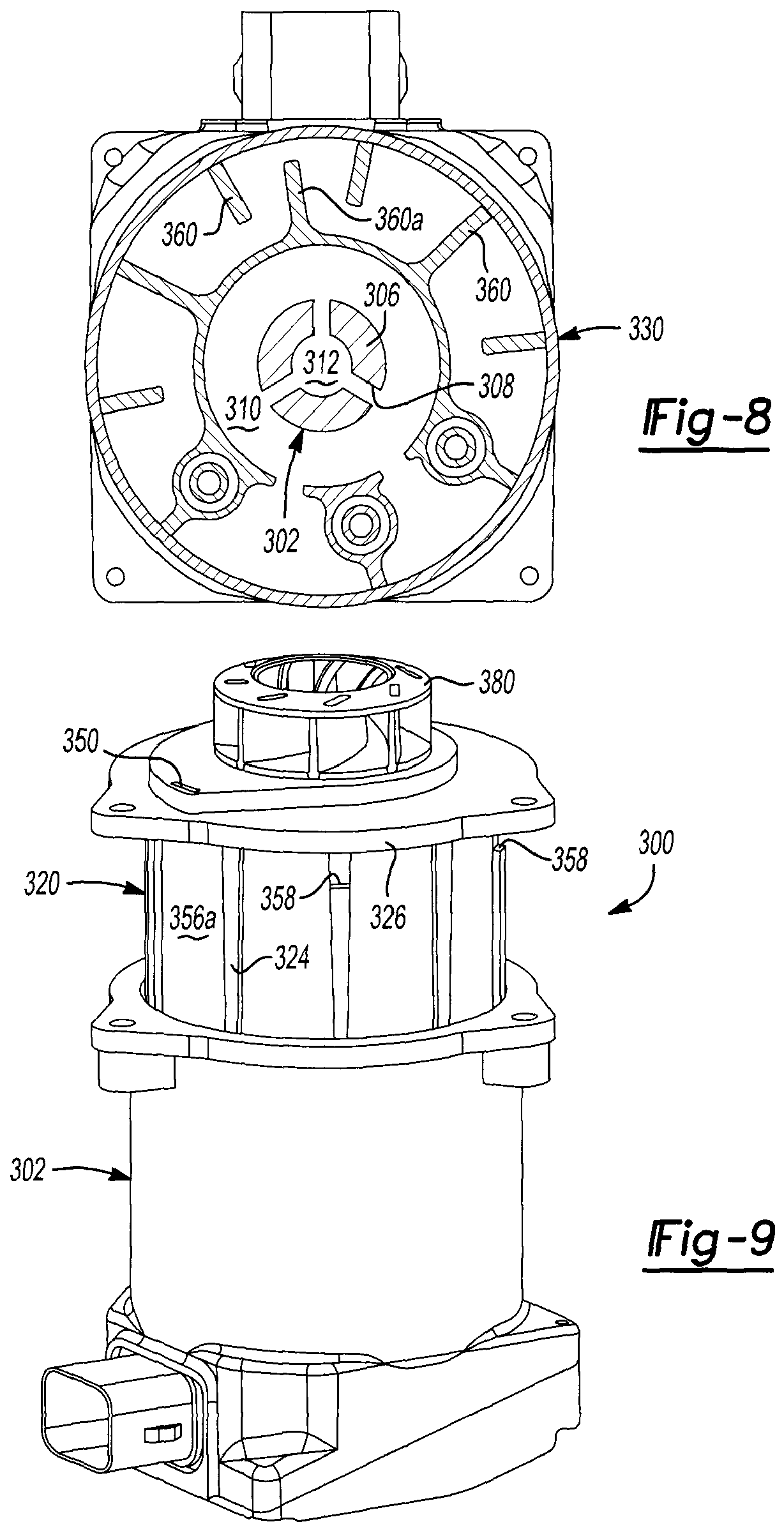 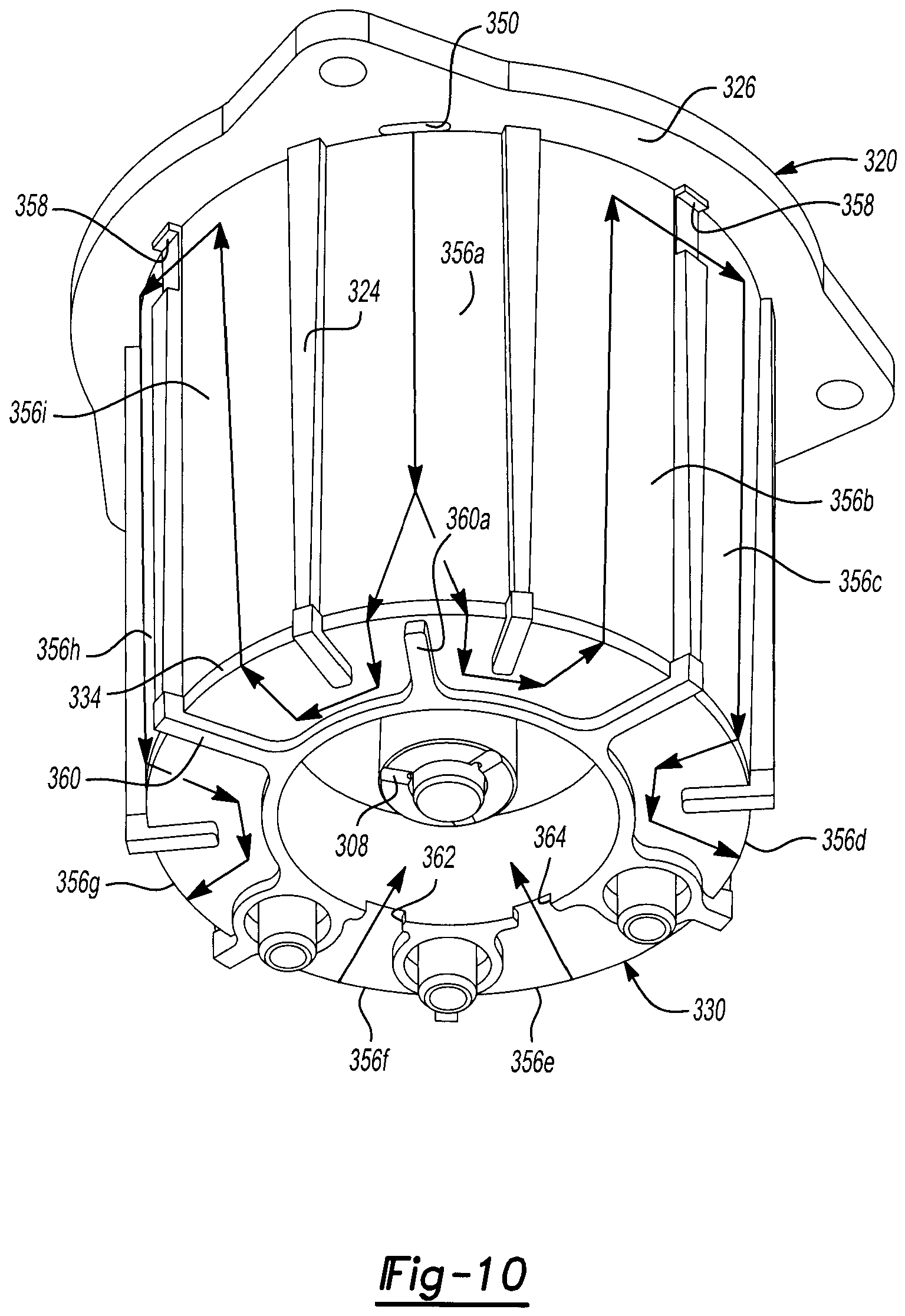 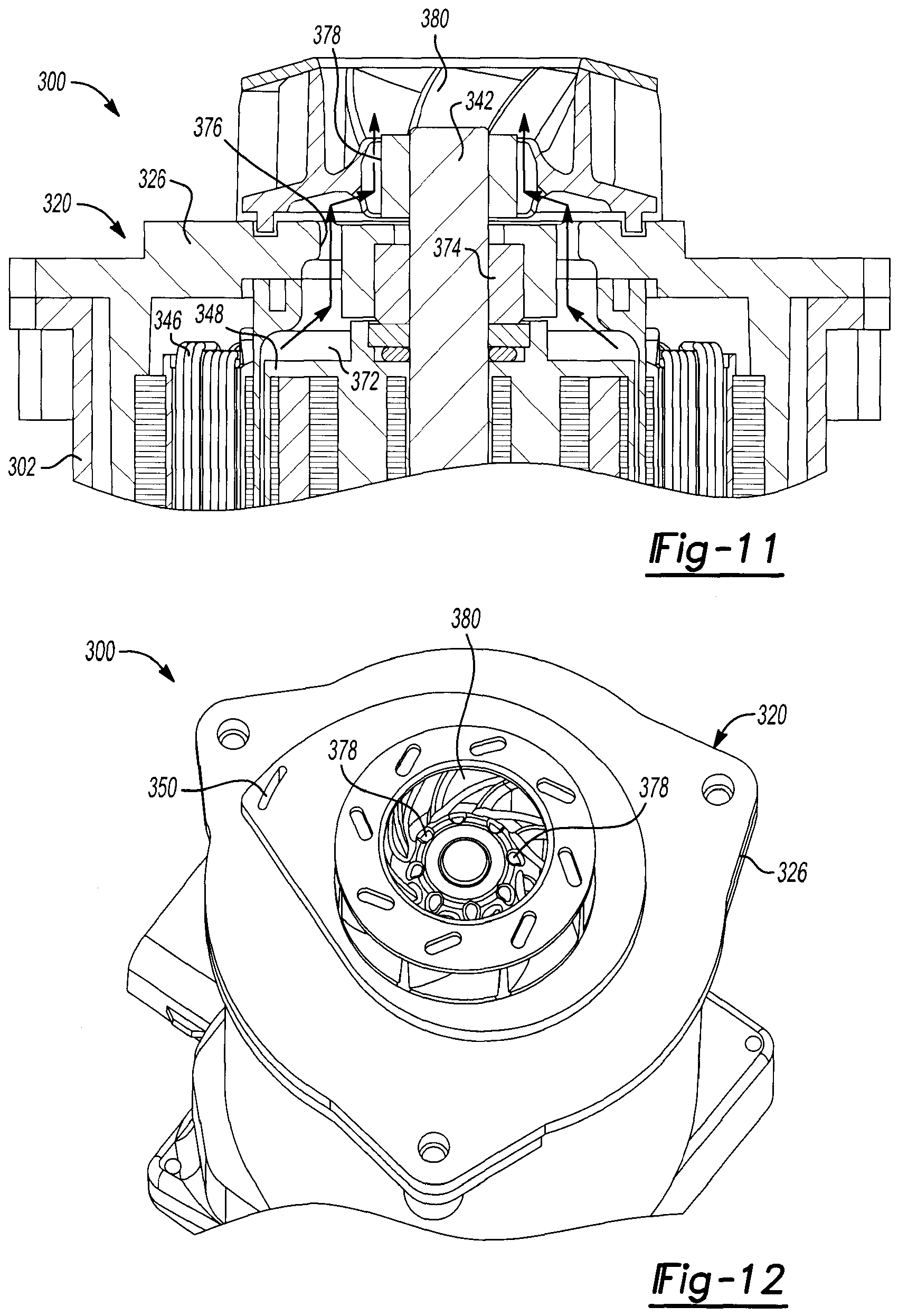