[0001] The present disclosure relates to a composition comprising N-acetyl-L-cysteine or its derivatives before the background of treating anxiety disorder. Particularly, the composition as claimed in independent claim 1 is useful in preventing the return of fear memories in a patient suffering from post-traumatic stress disorder or phobia as claimed in independent claim 1.

[0002] According to the Epidemiological Survey of Mental Disorders in Korea recently performed on 6,114 people between ages 18 to 64 by Seoul National University and National Mental Hospital, the lifetime prevalence of mental disorder was found to be about 34%. This indicates that one out of every three adults suffers from the illness at least once during their lifetime. Particularly, the survey shows that the lifetime prevalence of anxiety disorder including obsessive-compulsive disorder, post-traumatic stress disorder (PTSD), phobia and the like counts for 6.4% of the total illness.
[0003] It has been shown that through a widely used fear conditioning method in animal model, the limbic system such as amygdaloid body and nucleus accumbens are involved in the development of PTSD. Recently it has also been suggested that prefrontal lobe was involved in the return of fear memories (Moussawi et al., Nat.Neurosci. 2009 (2):182-9). In addition, it has been shown that the changes in the expression of receptors and the secretion of glutamate in the amygdaloid body and prefrontal lobe play an important role in the maintenance of fear memories. The treatment of PTSD and phobia has been hampered by the return fear memories. The available treatments for PTSD and phobia include cognitive restructuring, group therapy, exposure therapy, selective serotonin reuptake inhibitors (SSRI) and the like. However, they are symptomatic therapy and only temporary. Therefore there are demands for the new therapy.
[0004] Among them exposure therapy is a behavior therapy, which involves reliving a traumatic situation or confrontation with a feared object, situation, thought or memory in a controlled and therapeutic environment. It is considered to be one of the most effective treatments for the condition due to its effectiveness in reducing the symptoms of PTSD. However, it has some clinical limitations. Exposure therapy is not permanent and the symptoms return in an unexpected time, place and/or situation. Many researches have been done to prevent the return of fear memories after exposure therapy (Schiller et al., 2010, Nature 463(7277):49-53; Kindt et al., 2009, Nat. Neurosci. 12(3):256-8). Further the combined use of a drug together with exposure therapy has been done to improve the efficacy of the therapy and to overcome the limitations (Ressler et al., 2004, Arch. Gen. Psychiatry: 1138-42).
[0005] Currently there are only limited drugs available to treat anxiety disorder such as PTSD and phobia, the efficacy of which is only marginal and temporary (US 2007/286909, DE 20 2006 013518, WO 2006/108055).

[0006] The present disclosure is to provide a pharmaceutical composition comprising N-acetyl-L-cysteine or its derivatives for use in preventing the return of fear memories in a patient suffering from post-traumatic stress disorder or phobia, wherein said patient is treated with exposure therapy and wherein said pharmaceutical composition is combined with said exposure therapy, wherein said
derivative thereof is N-acetyl-L-cysteine amide or its sila derivative.
[0007] In an embodiment, the composition as claimed may further comprises at least one of supplementary components selected from the group consisting of vitamin, mineral and blood circulation enhancing agents.

[0008] These and/or other aspects and advantages of the invention will become apparent and more readily appreciated from the following description of the embodiments, taken in conjunction with the accompanying drawings of which:

FIG. 1 is an exemplary schematic representation of the experimental design to administer N-Acetyl-L-cysteine during the fear memory extinction process.

FIG. 2 is a graph showing the effect of N-Acetyl-L-cysteine administered during the fear memory extinction process. The result indicates that the return of fear-memories was prevented and the effect was long- lasted.

FIG. 4 is a graph showing the effect of N-Acetyl-L-cysteine administered after the fear memory extinction process and before the renewal of fear memories. The result indicates that the return of fear-memories was prevented in the rats tested.

FIG. 5 is an exemplary schematic representation of the experimental design to determine the extent to which the return is prevented by the administration of N-Acetyl-L-cysteine that was administered immediately before the renewal of fear memories.

FIG. 6 is a graph showing that the N-Acetyl-L-cysteine administered immediately before the renewal of fear memories prevented the return of fear-memories in the rats tested.

[0032] The following experiments were performed to test the effect NAC on blocking the return of fear memories in exposure therapy to reduce the fear memories.

[0033] All procedures were approved by the Institute of Laboratory Animal Resources of Seoul National University. Sprague-Dawley Rats (8-9 weeks old, from Samtaco, Korea) were maintained with free access to water and food with 12 hour dark/light cycles (lights off at 09:00 hrs). Group of three to six animals were used for each experiment. (26 in total)
[0034] For fear conditioning, the rats were presented with a tone (2.8 kHz, 85 dB) co-terminating with an electrical shock (1.0 mA, 1 s) three times at an interval of 100 sec.
[0035] The rats were returned to the cage 1 minute after the last shock has been applied. Three days after the conditioning, the exposure therapy was done in a chamber distinct from the conditioning chamber for both extinction training and tone tests. 10 tones were presented at an interval of 100 sec without shocks, during which the freezing responses were measured to determine the reduction of fear memories. Unpaired, two-tailed T-test was used to analyze the results.

[0036] In the Example 1-1, from 3 to 5 days after the conditioning, NAC in physiological saline was peritoneally administered once a day at the concentration of 200 mg/kg, 2.5 hours before the exposure therapy was applied. The negative control was only received physiological saline. The scheme is shown in Fig. 1.

[0037] The renewal test was done on day 12 after the conditioning was completed. The same chamber and place as it was used for the fear conditioning were used for the renewal. The rats with the extinction training were placed in the conditioning chamber and were left undisturbed for 10 minutes. Then the fear memory was recalled by presenting the rats with a tone for 30 sec. The fear memory recalled was determined by measuring the freezing response as described before (Kim et al., PNAS 104:20955-960, 2007). The freezing was defined as immobility except for respiratory movements and was quantified by trained observers who were blind to the experimental groups.
[0038] To test the sustained effects of the drug used, additional renewal test was performed on day 21 after the fear conditioning test was completed. As shown in Fig. 2, the renewal of the fear memory was blocked in the experimental groups that received NAC in contrast to the control group.

Example 2 The blockade of fear memories by the administration of NAC one day before a renewal test.

[0039] The same procedures as described in Example 1-1 were used for the conditioning and extinction training. The extinction training was performed for 4 days starting from day 3 after the conditioning was applied. On the 7th day, 200mg/kg of NAC was injected peritoneally. On the 8 and 9th day after the completion of the conditioning, the renewal test was performed to measure the response to fear as described in Example 1-3 (See Fig. 3). As shown in Fig. 4, on the 9 th day after the fear conditioning, the renewal of the fear memory was blocked in the experimental groups that received NAC in contrast to the control group.

Example 3 The prevention of fear memories by the administration of NAC immediately before a renewal test.

[0040] The same procedures as described in Example 1-1 were used for the conditioning and extinction training. The extinction training was performed for 4 days starting from the day 3 after the conditioning was applied. On the7th and 8th day after the completion of the conditioning, at 2.5 hours before the renewal test was started, 200mg/kg of NAC was injected peritoneally. The renewal test was performed as described in Example 1-3 (See Fig. 5). As shown in Fig. 6, on the 8th day after the fear conditioning, the renewal of the fear memory was blocked in the experimental groups received NAC in contrast to the control group.
[0041] In accordance with the present disclosure, NAC or its derivatives as claimed in independent claim 1 is utilized as pharmaceutical composition for the use as claimed in independent claim 1. 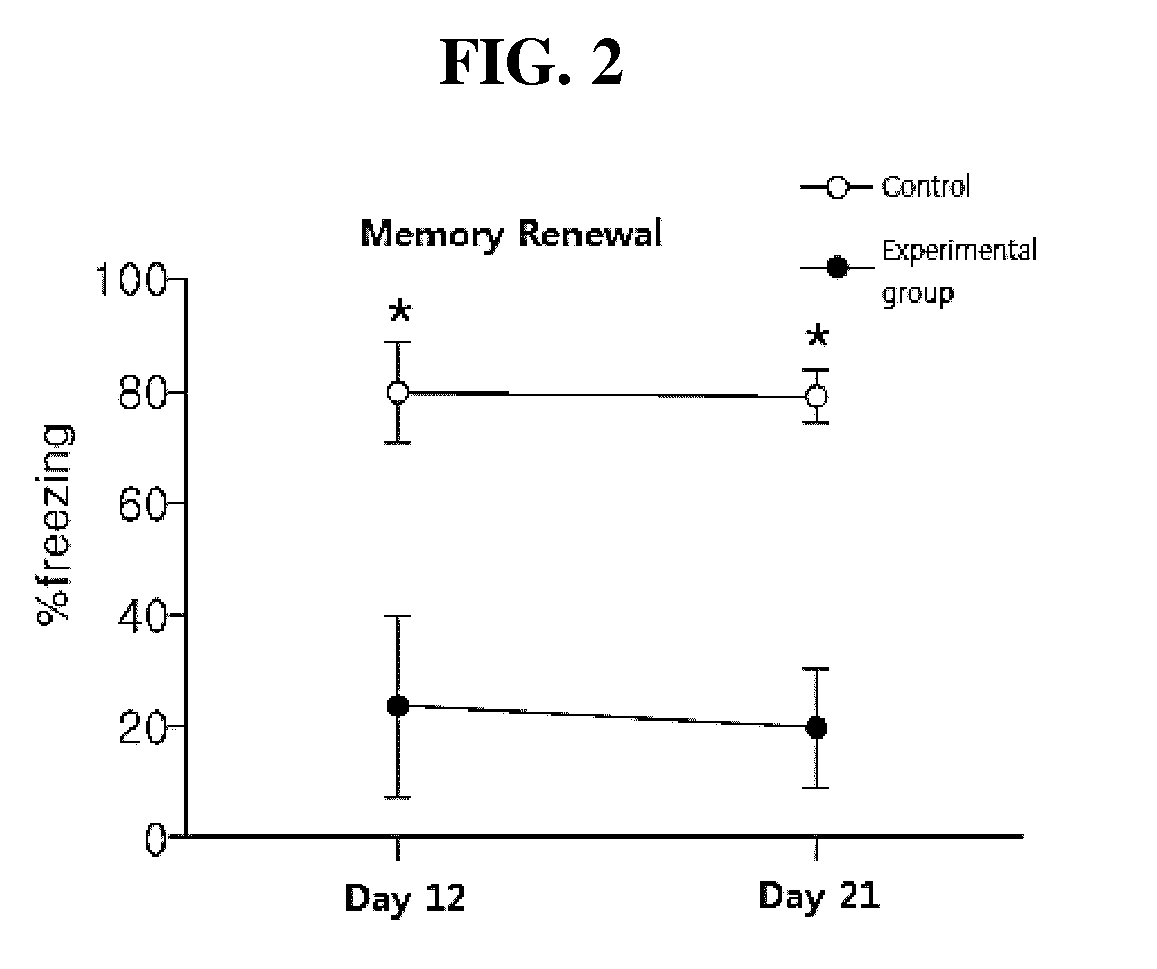 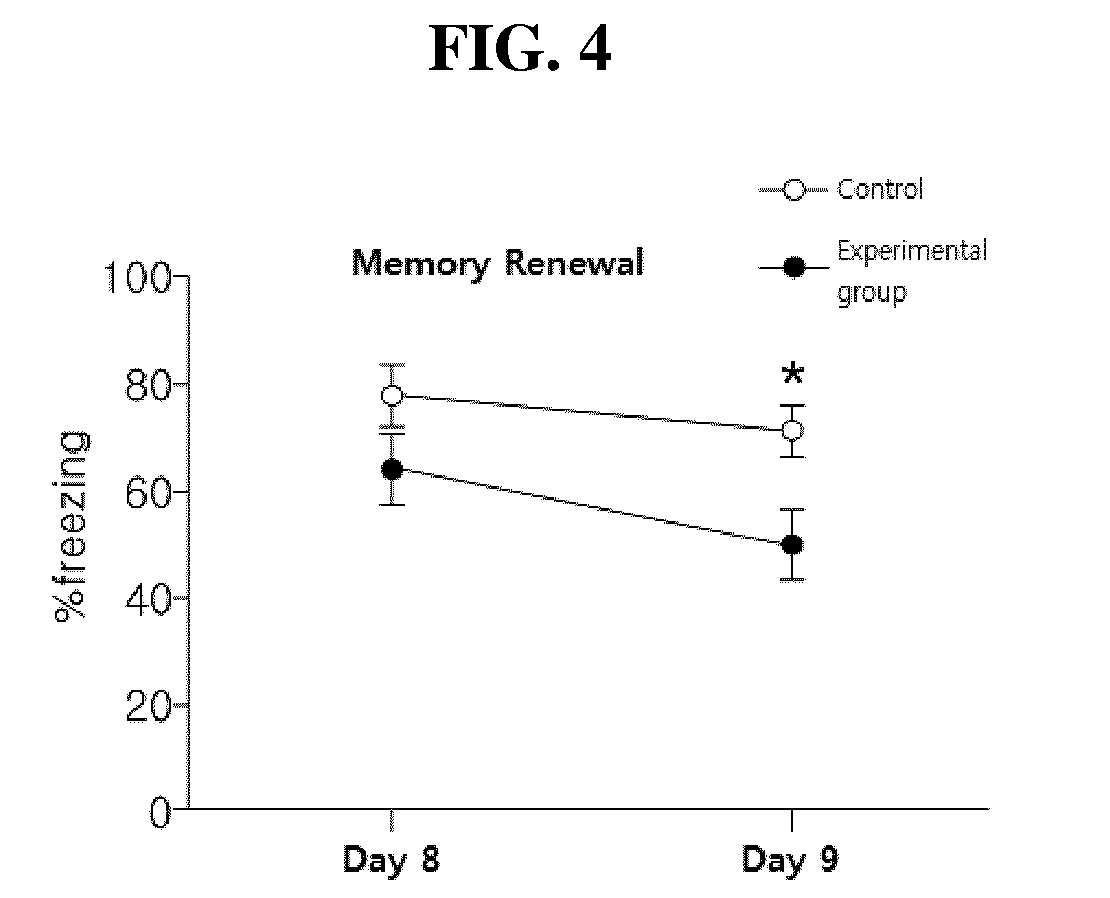 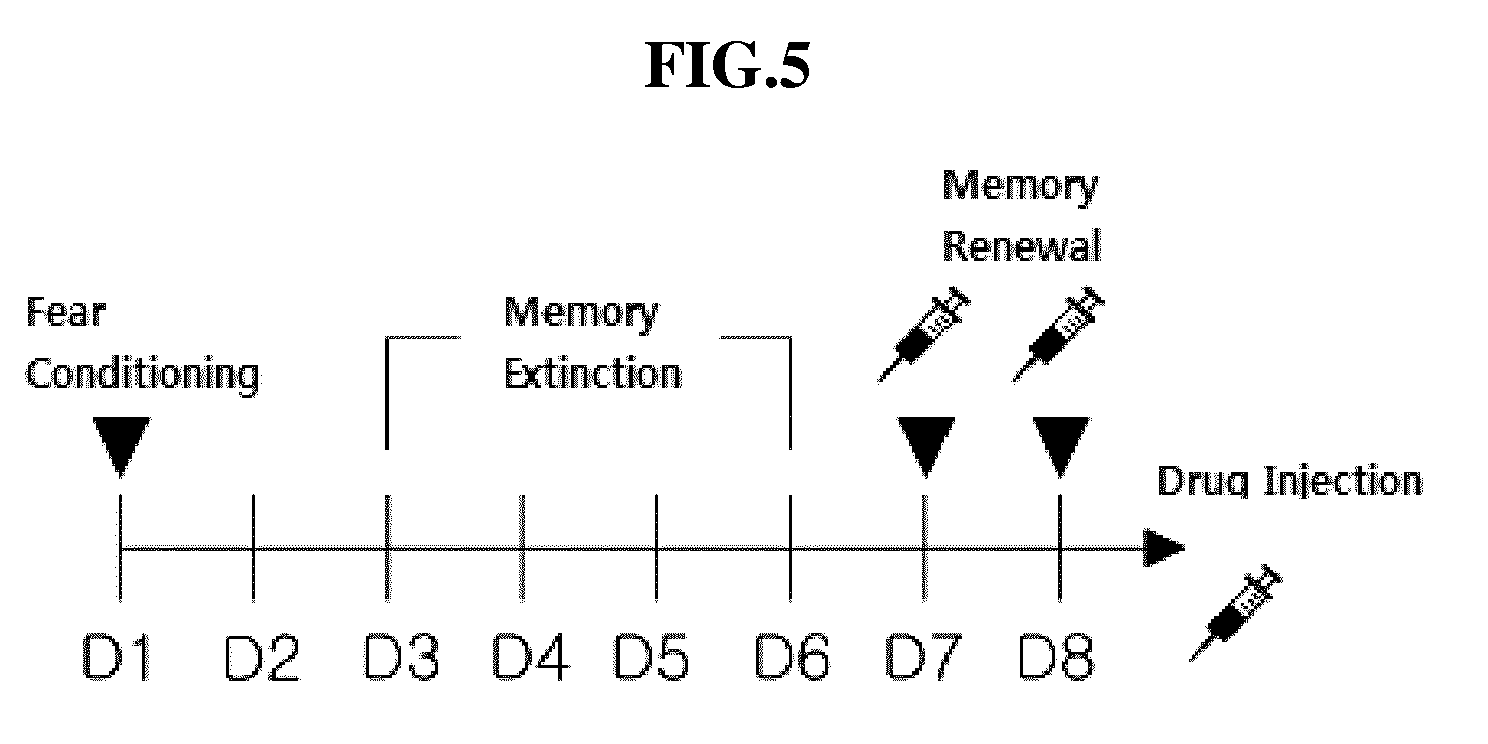 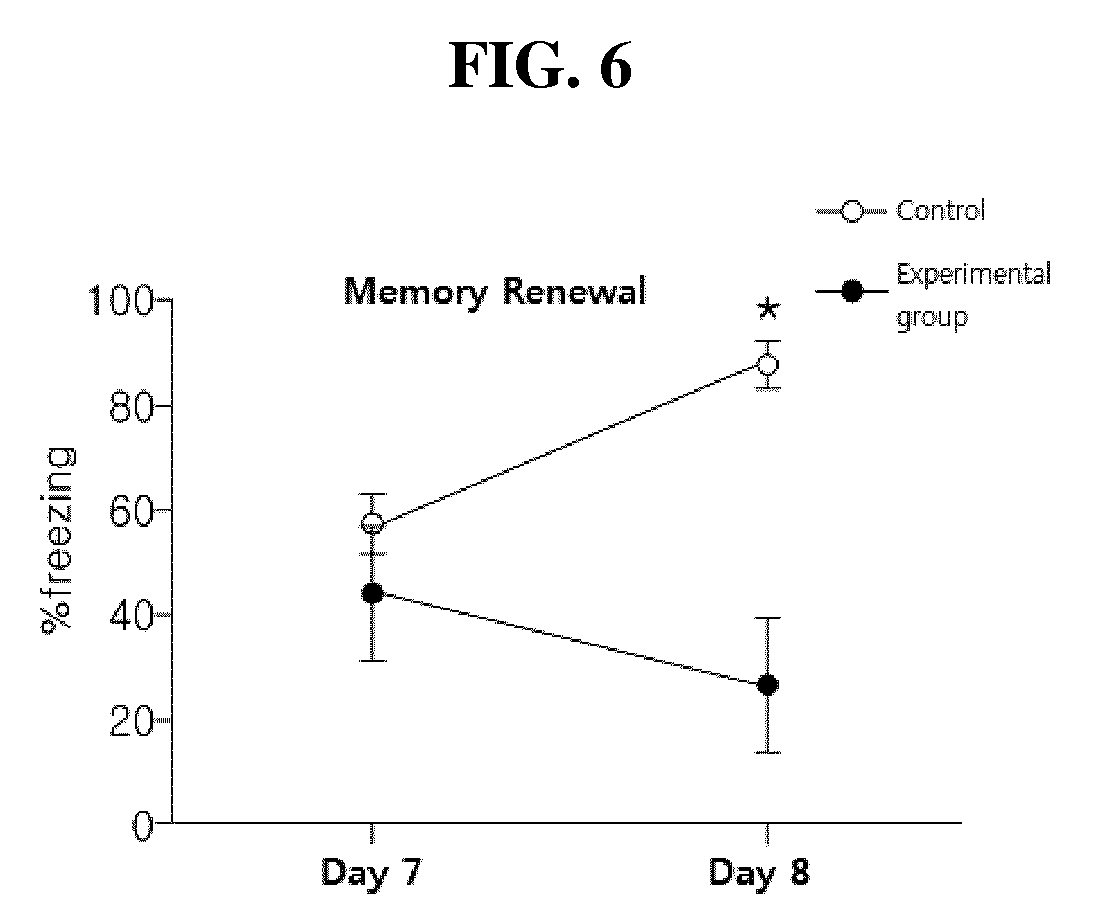