[0001] The present disclosure relates to systems and methods for performing online extracorporeal photopheresis ("ECP"). More particularly, the present disclosure is directed to systems and methods for removing mononuclear cells from a patient, treating the removed cells and returning treated cells to the patient in a single "on-line" procedure utilizing a multifunctional apheresis device, an independent and separately housed device for irradiating cells with light and a disposable processing set that provides a sterile closed pathway between the apheresis device and the irradiation device.

Fig. 1 is a diagram generally showing the mechanical components of a photopheresis treatment as described herein;

Fig. 2 is a partial perspective view of a multifunctional apheresis separator useful in the methods and systems described herein;

Fig. 3 is a perspective view of a processing container (separation chamber) of the processing set used with the separator of Fig. 2;

Fig. 4 is a diagram of the fluid circuit useful in the collection, treatment and reinfusion of mononuclear cells as described herein; and

Fig. 5 is a flow chart setting forth the steps of the method of a photopheresis treatment as described herein.

Description of the Illustrated Embodiments

(a) a disposable fluid circuit (200) comprising:

i. a processing chamber (12) for separating whole blood into one or more components including mononuclear cells,

ii. at least one storage container (68) adapted to receive mononuclear cells wherein at least a portion of said container (68) is transparent to light of a selected wavelength,

2. The system of Claim 1, wherein the system is configured for returning treated mononuclear cells from the storage container (68) to said separation chamber (12) for concentration into a concentrate of said treated cells, wherein supernatant is separated from the concentrated and treated cells to a waste container.

4. The system of Claim 3, wherein the system is configured for combining the concentrated and treated cells with a wash solution in the centrifugation device.

6. The system of Claim 5, wherein the said peristaltic pump is actuated by the controller.

7. The system as claimed in any of the preceding claims, wherein the system is programmed, under the direction of the controller, to automatically deliver a desired amount of photoactive agent from a container (69) before or after collection of mononuclear cells into the storage container (68).

8. The system as claimed in any of the preceding claims, wherein the irradiation treatment is carried out with UVA light, and the storage container (68) has container walls made of ethylene vinyl acetate (EVA).

12. The control method as claimed in Claim 11, wherein the desired amount is determined based on the volume of mononuclear cells collected or to be collected. 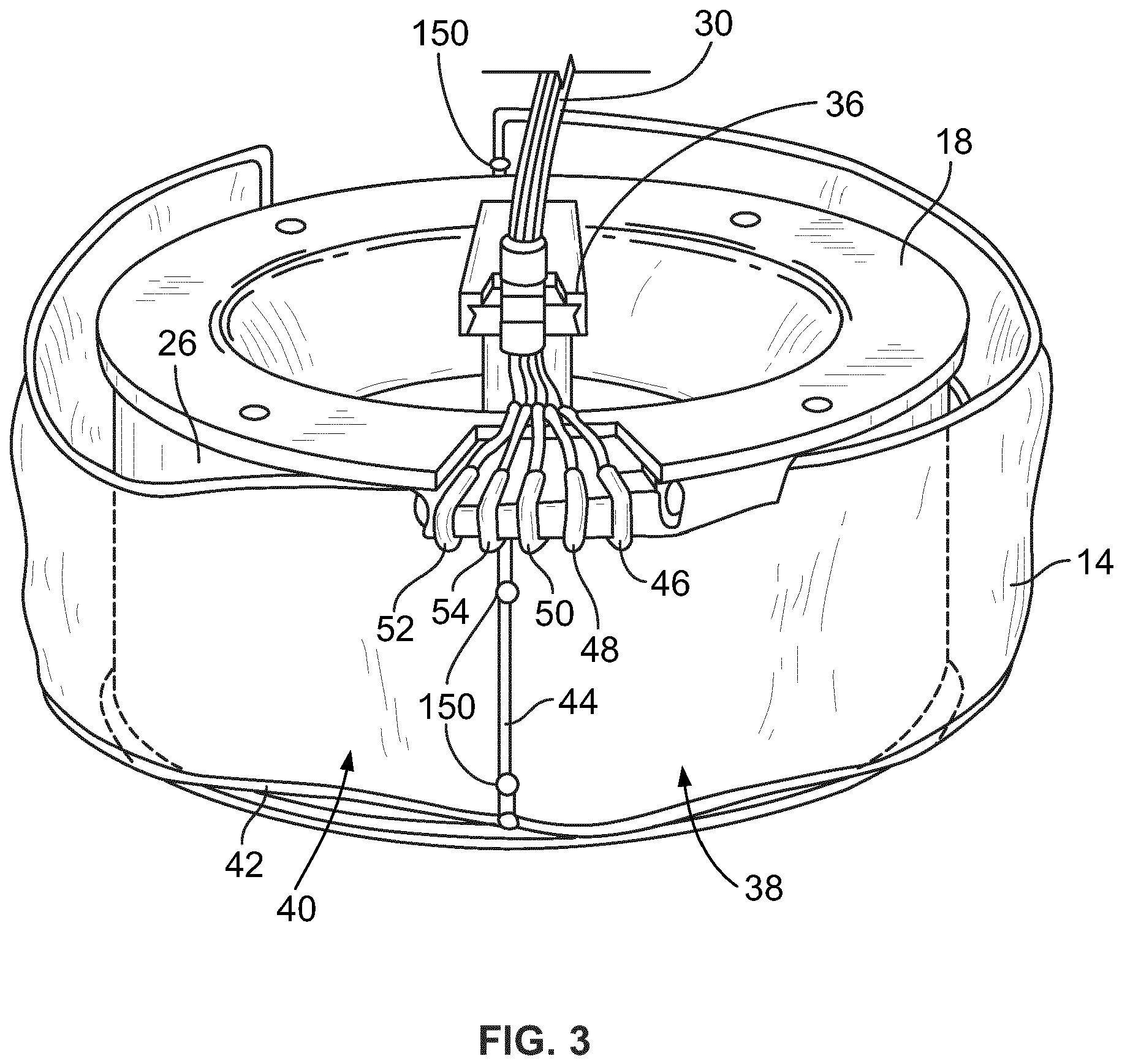 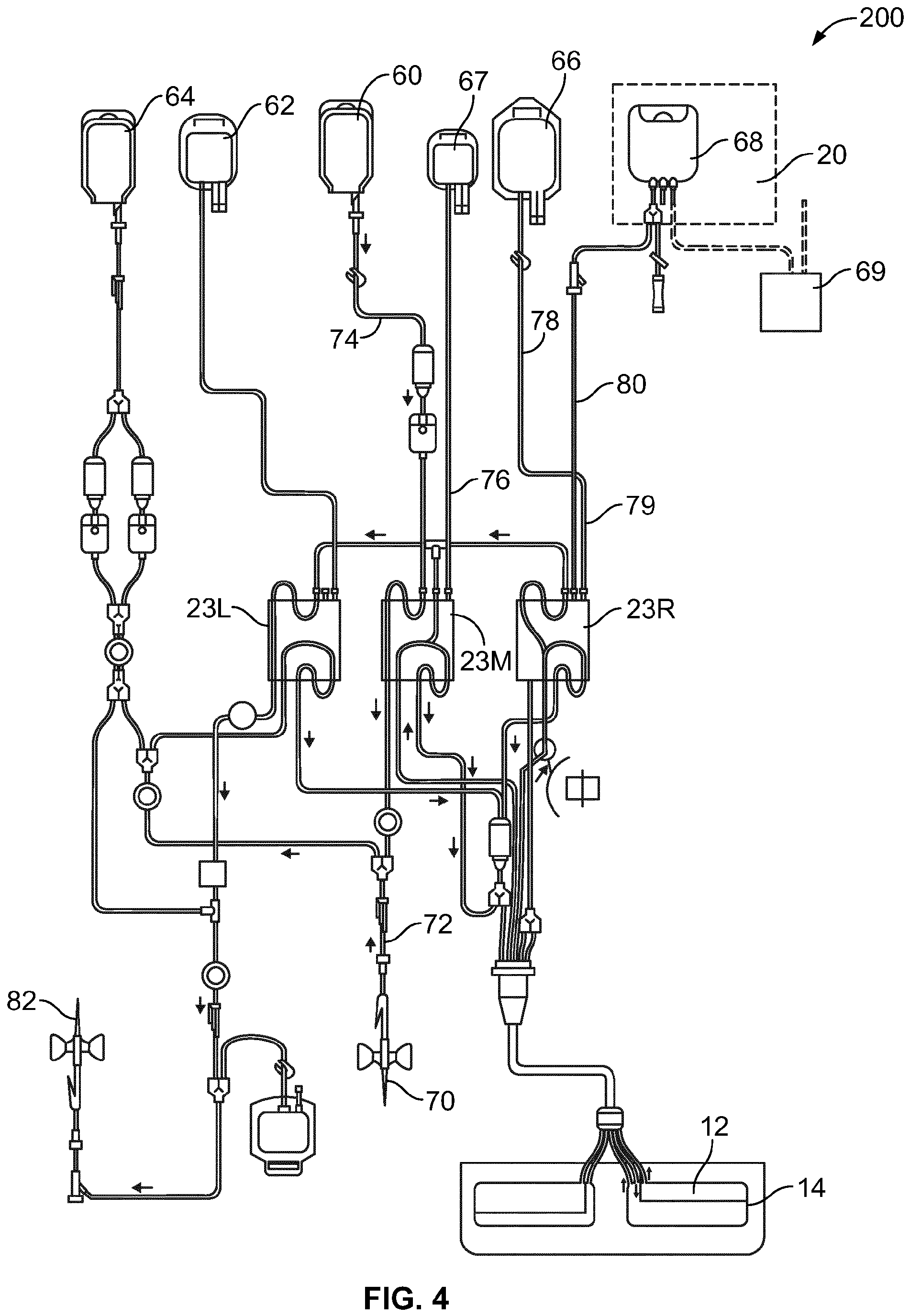 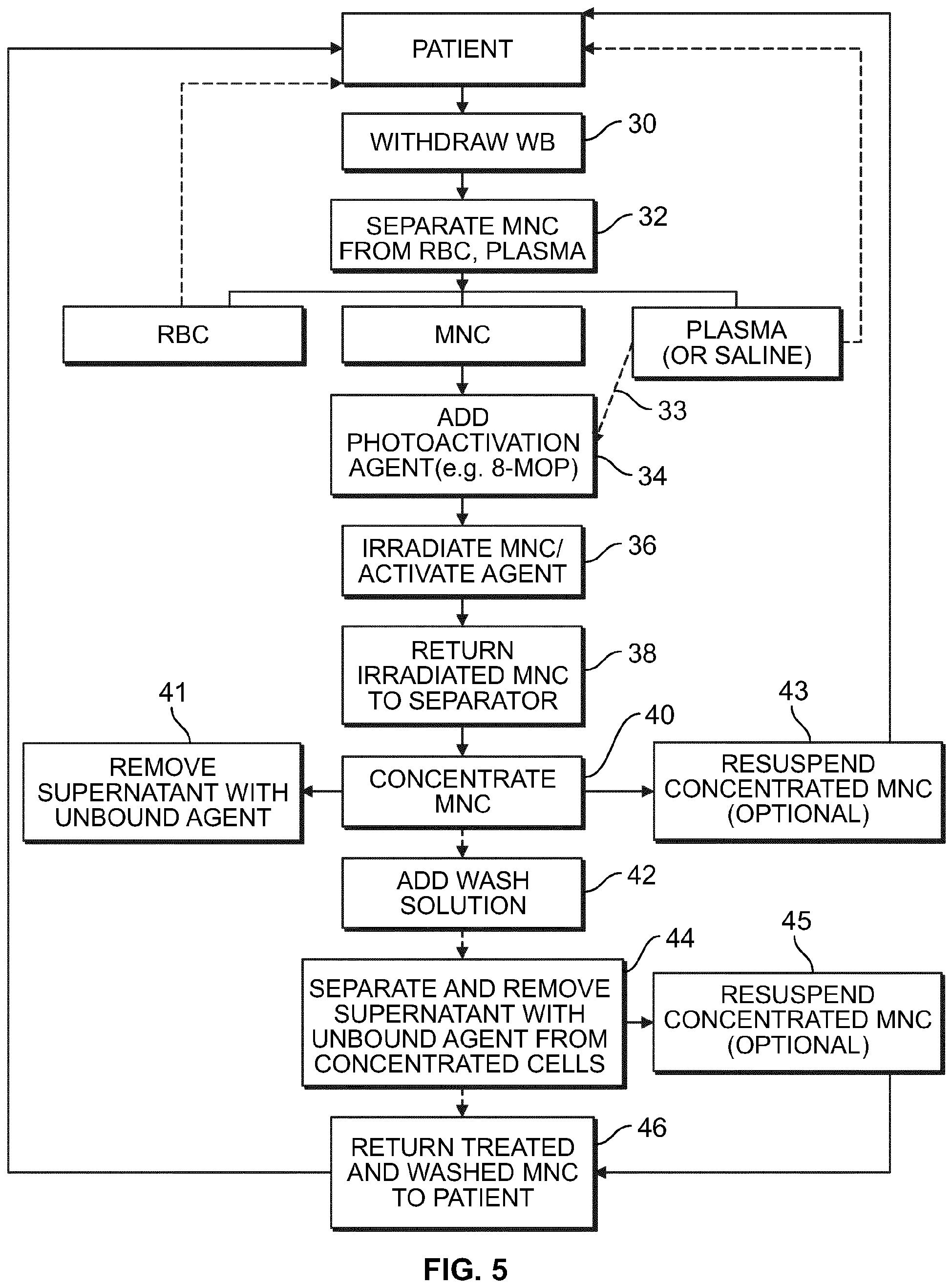