[0002] Implantable stimulation devices are devices that generate and deliver electrical stimuli to body nerves and tissues for the therapy of various biological disorders, such as pacemakers to treat cardiac arrhythmia, defibrillators to treat cardiac fibrillation, cochlear stimulators to treat deafness, retinal stimulators to treat blindness, muscle stimulators to produce coordinated limb movement, spinal cord stimulators to treat chronic pain, cortical and deep brain stimulators to treat motor and psychological disorders, and other neural stimulators to treat urinary incontinence, sleep apnea, shoulder sublaxation, etc. The present invention may find applicability in all such applications, although the description that follows will generally focus on the use of the invention within a Spinal Cord Stimulation (SCS) system, such as that disclosed in U.S. Patent 6,516,227.
[0003] US 5,123,419 describes a combined pacemaker parameter and vital sign monitor and US 5,974,341 relates to a method and apparatus for detecting and displaying diagnostic information in conjunction with intracardiac electrograms and surface electrograms.
[0004] Spinal cord stimulation is a well-accepted clinical method for reducing pain in certain populations of patients. As shown in Figures 1A and 1B, a SCS system typically includes an Implantable Pulse Generator (IPG) 100, which includes a biocompatible case 30 formed of titanium for example. The case 30 typically holds the circuitry and power source or battery necessary for the IPG to function, although IPGs can also be powered via external RF energy and without a battery. The IPG 100 is coupled to electrodes 106 via one or more electrode leads (two such leads 102 and 104 are shown), such that the electrodes 106 form an electrode array 110. The electrodes 106 are carried on a flexible body 108, which also houses the individual signal wires 112 and 114 coupled to each electrode. In the illustrated embodiment, there are eight electrodes on lead 102, labeled E1-E8, and eight electrodes on lead 104, labeled E9-E16, although the number of leads and electrodes is application specific and therefore can vary.
[0005] Portions of an IPG system are shown in Figure 2 in cross section, and include the IPG 100 and an external controller (remote control) 210. The IPG 100 typically includes an electronic substrate assembly 14 including a printed circuit board (PCB) 16, along with various electronic components 20, such as microcontrollers, integrated circuits, and capacitors mounted to the PCB 16. Two coils are generally present in the IPG 100: a telemetry coil 13 used to transmit/receive data to/from the external controller 210; and a charging coil 18 for charging or recharging the IPG's power source or battery 26 using an external charger (not shown). The telemetry coil 13 can be mounted within the header connector 36 as shown, or can be included within the case 30.
[0006] As just noted, an external controller 210, such as a hand-held programmer or a clinician's programmer, is used to wirelessly send data to and receive data from the IPG 100. For example, the external controller 210 can send programming data to the IPG 100 to set the therapy the IPG 100 will provide to the patient. Also, the external controller 210 can act as a receiver of data from the IPG 100, such as various data reporting on the IPG's status.
[0007] The communication of data to and from the external controller 210 occurs via magnetic inductive coupling. When data is to be sent from the external controller 210 to the IPG 100 for example, coil 17 is energized with an alternating current (AC). Such energizing of the coil 17 to transfer data can occur using a Frequency Shift Keying (FSK) protocol for example, such as disclosed in U.S. Patent Application Serial No. 11/780,369, filed July 19, 2007. Energizing the coil 17 induces an electromagnetic field, which in turn induces a current in the IPG's telemetry coil 13, which current can then be demodulated to recover the original data. Communication from the IPG 100 to the external controller 210 occurs in essentially the same manner.
[0008] A front view of an external controller 210 is illustrated in Figure 3. As shown, the external controller typically comprises a user interface, which includes various input buttons 250 and a display 440. The user interface may comprise other audible or tactile aspects as well. Using the user interface, the patient can perform various functions. For example, the user can adjust stimulation parameters using the buttons 250, which button presses can cause changes on a gauge on the display 440, such as the increase or decrease of stimulation power. Or, the display 440 can indicate status information with or without the pressing of buttons 250, such as the status of the battery 26 (Fig. 2) in the IPG 100. Further details concerning the structure and functionality of an external controller can be found in U.S. Patent Application Serial No. 11/935,111, filed November 5, 2007, with which the reader is assumed familiar.
[0009] As external controllers 210 and IPG 100 become more advanced, the inventors have noticed that it is advantageous to provide a richer user interface to the patient, such as a higher resolution, color display. For example, patients can currently use their external controllers 210 to steer current between electrodes to find a stimulation therapy that is most beneficial, such as occurs using Boston Scientific's i-Sculpt™ technology. See http://www.chrisamichaels.com/assets/precplus.pdf, a copy of which is filed with this application. But current steering is difficult using the microcontrollers and displays present in traditional external controllers, which typically use a monochrome liquid crystal display that is relatively simple to drive and does not require significant computing resources. Larger, higher resolution displays would better enable current steering and other system functionality, but this requires additional computing resources, which resources are difficult to provide using the microcontrollers present in previous external controllers. This disclosure provides a solution.

Figures 1A and 1B show an implantable pulse generator (IPG), and the manner in which an electrode array is coupled to the IPG in accordance with the prior art.

Figure 2 shows wireless communication of data between an external controller and an IPG.

Figure 3 shows an external controller of the prior art.

Figure 4 shows in block diagram form an external controller with dual microcontrollers according to one embodiment.

Figure 6 shows in flow chart form a technique for processing telemetry data in an external controller with dual microcontrollers according to one embodiment.

Figure 7 shows in flow chart form a technique for processing telemetry data in an external controller with dual microcontrollers according to another embodiment.

1. A method for rendering at least one graphic on a display (440) of an external medical device, comprising:

receiving at a first microcontroller (410) input data telemetered from an implantable medical device (100);

transmitting the graphics command to a second microcontroller (420);

receiving at the second microcontroller (420) at least one image file and a location associated with each image file from a storage device using the screen index, wherein each image file corresponds to a graphic to be rendered;

modifying at the second microcontroller (420) each graphic in accordance with its associated attribute; and 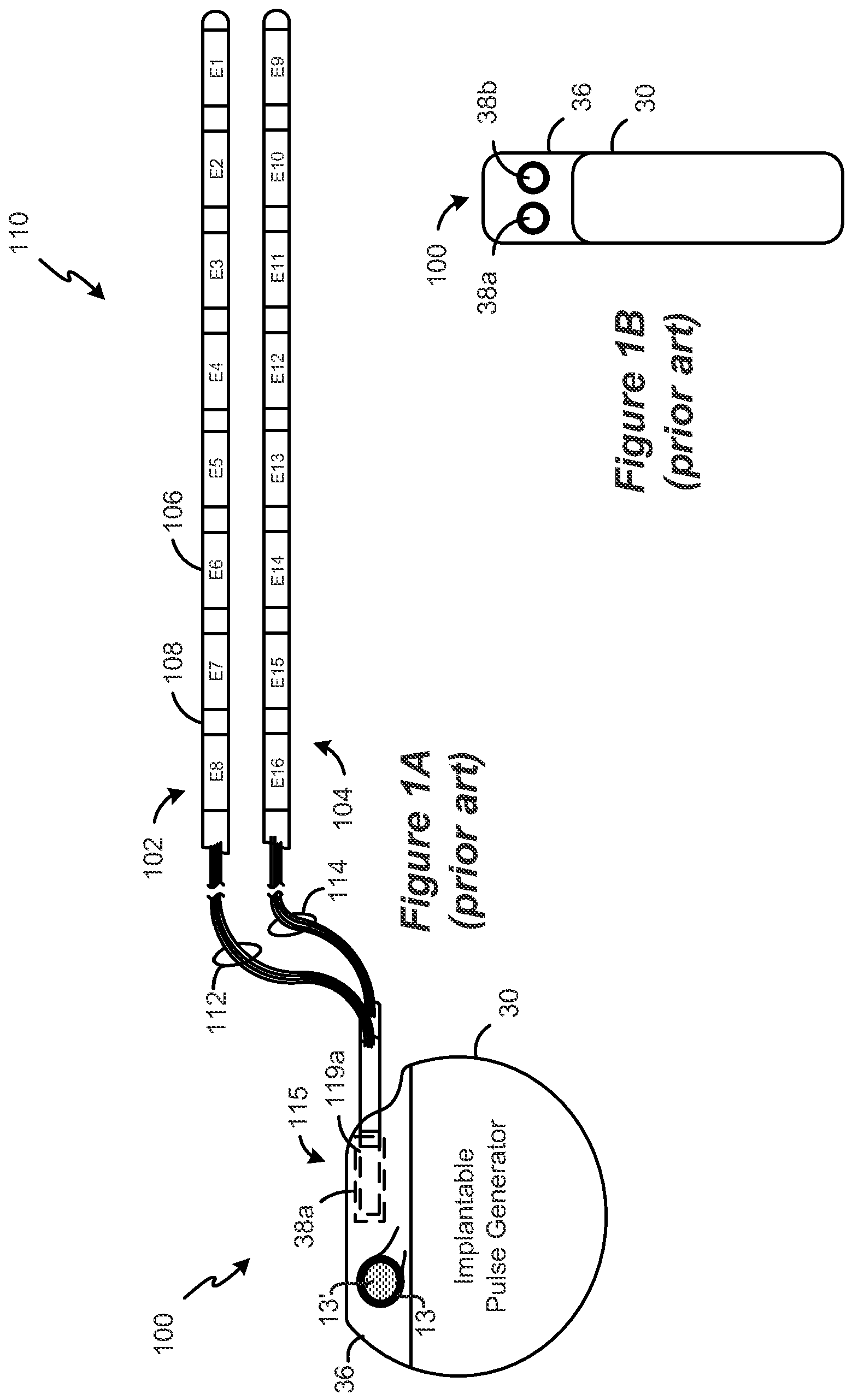 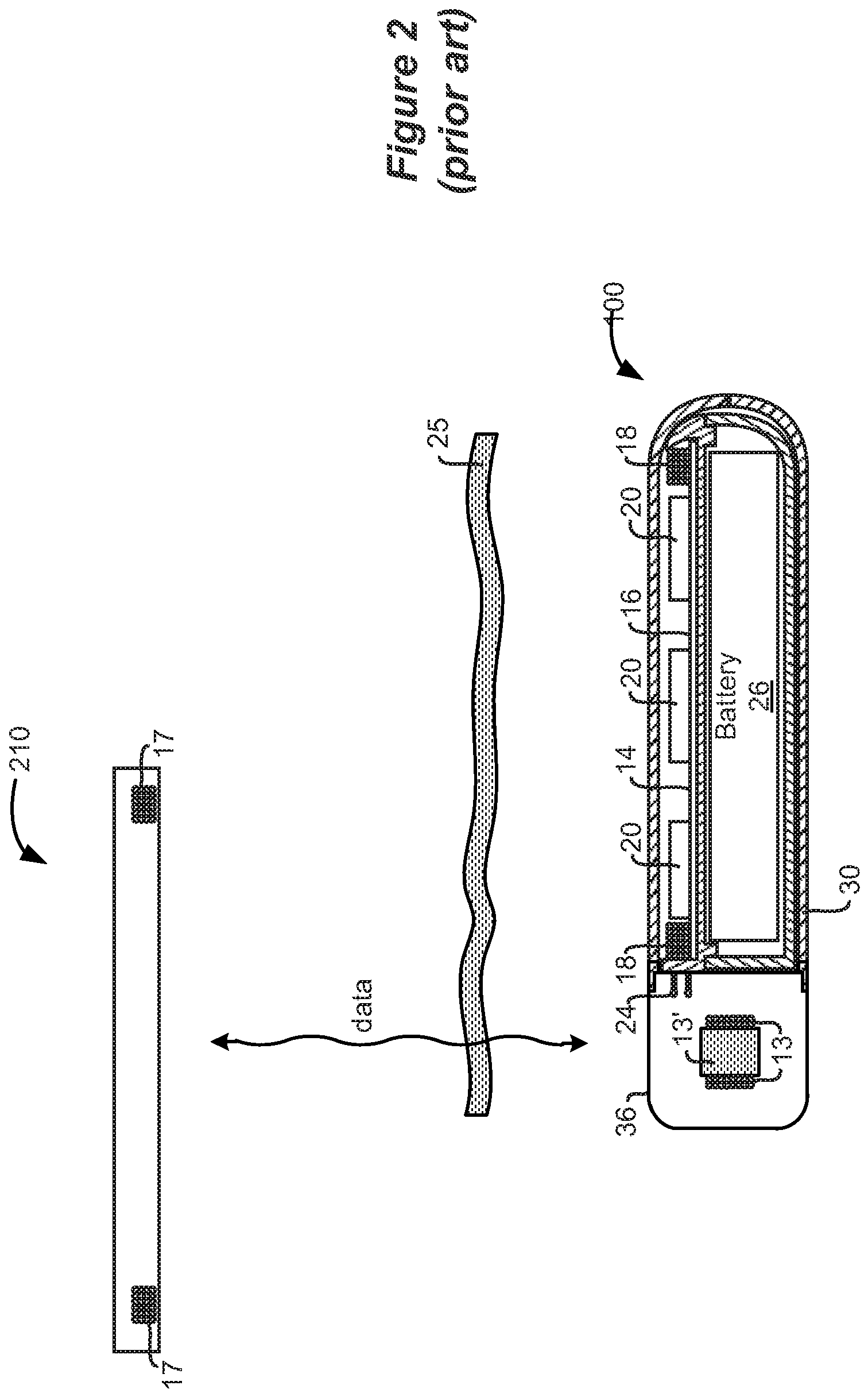 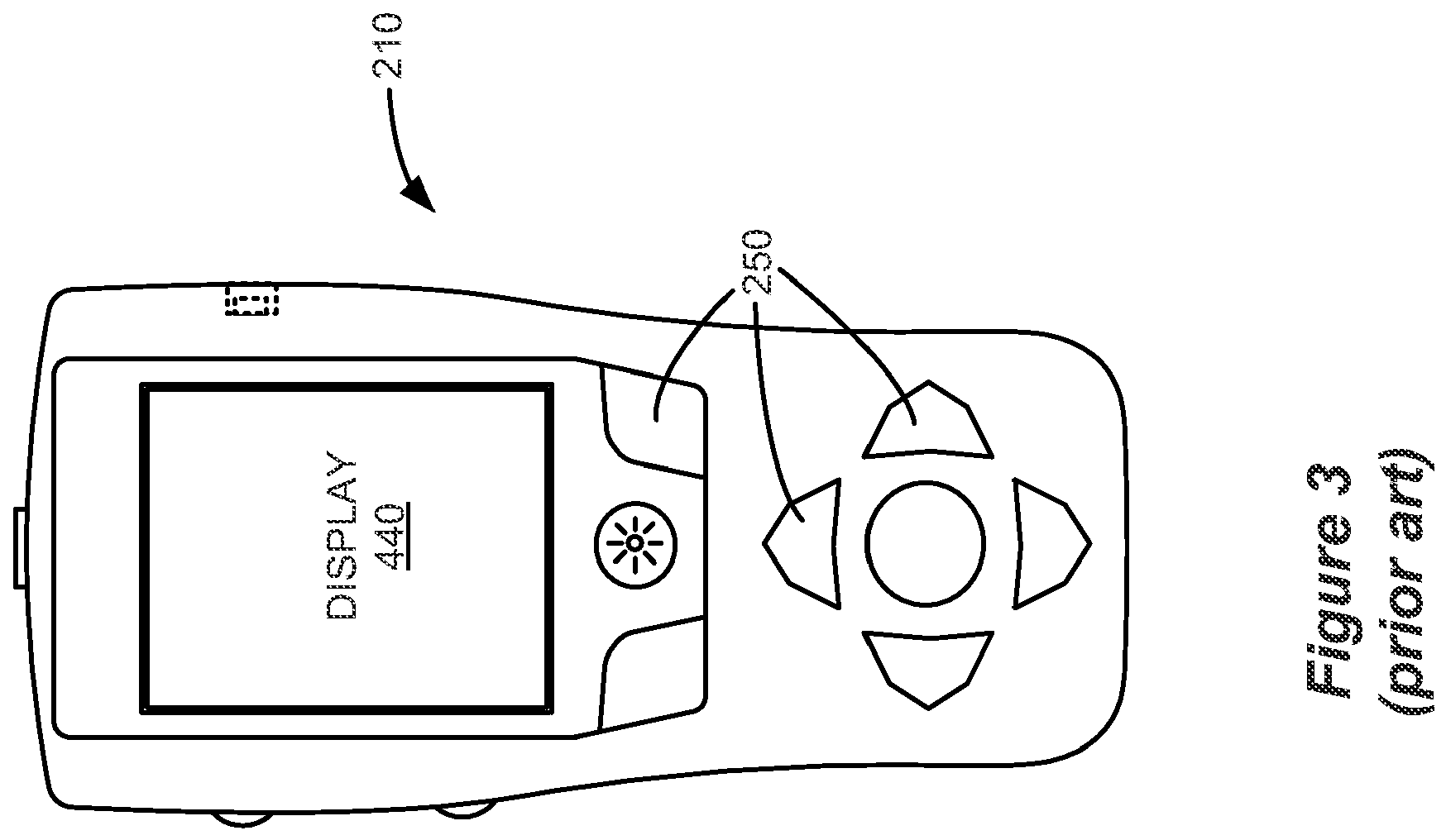 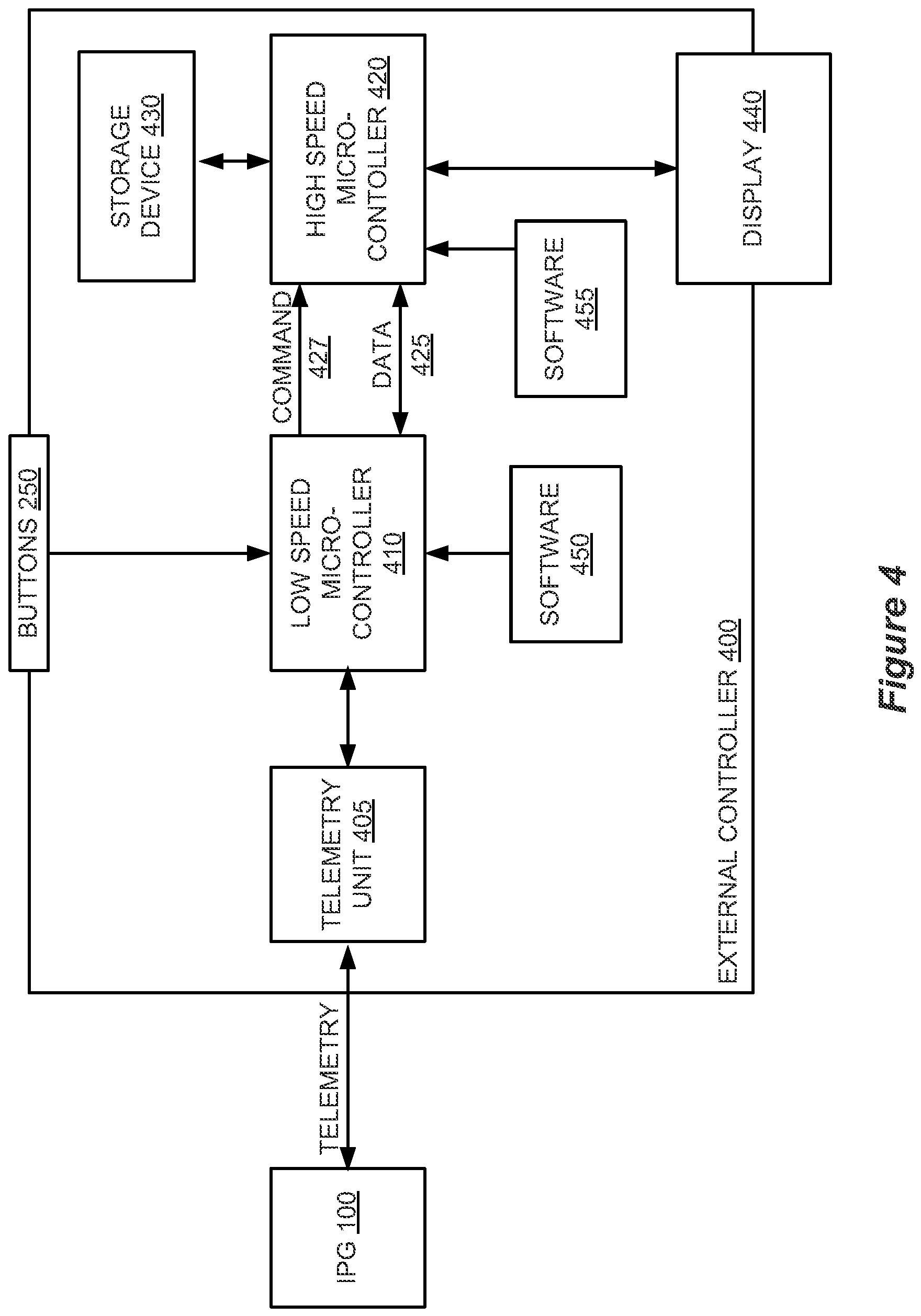 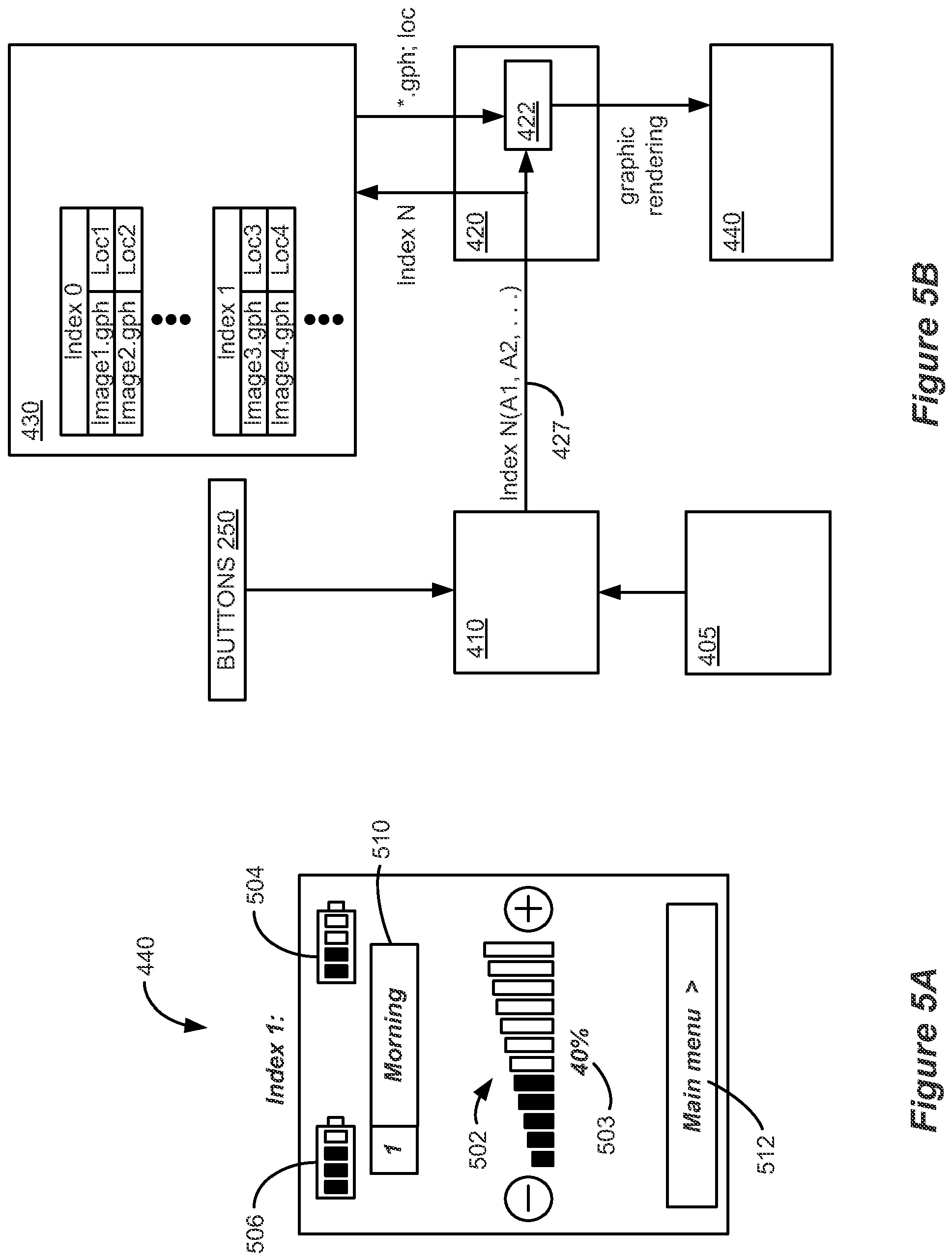 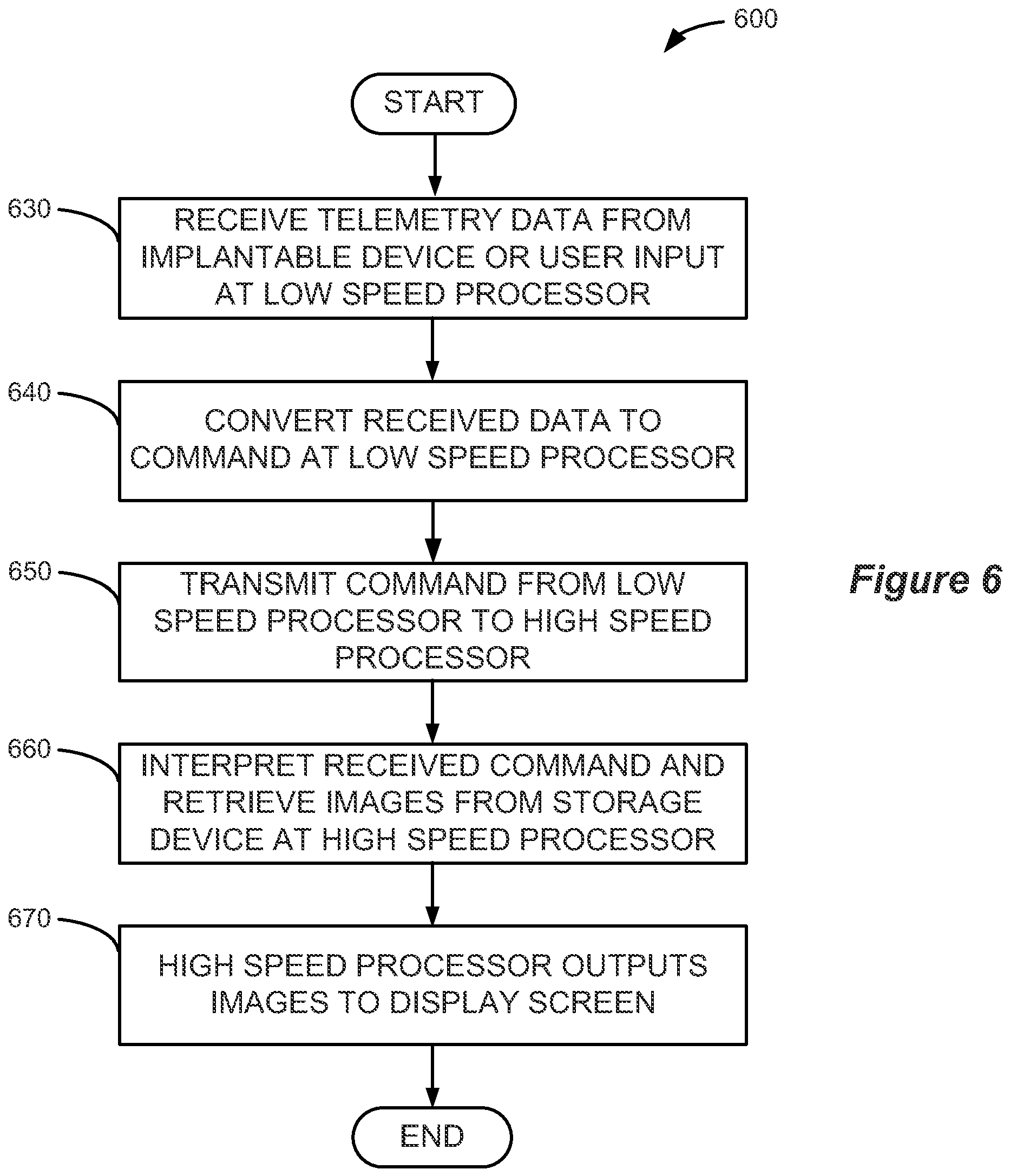 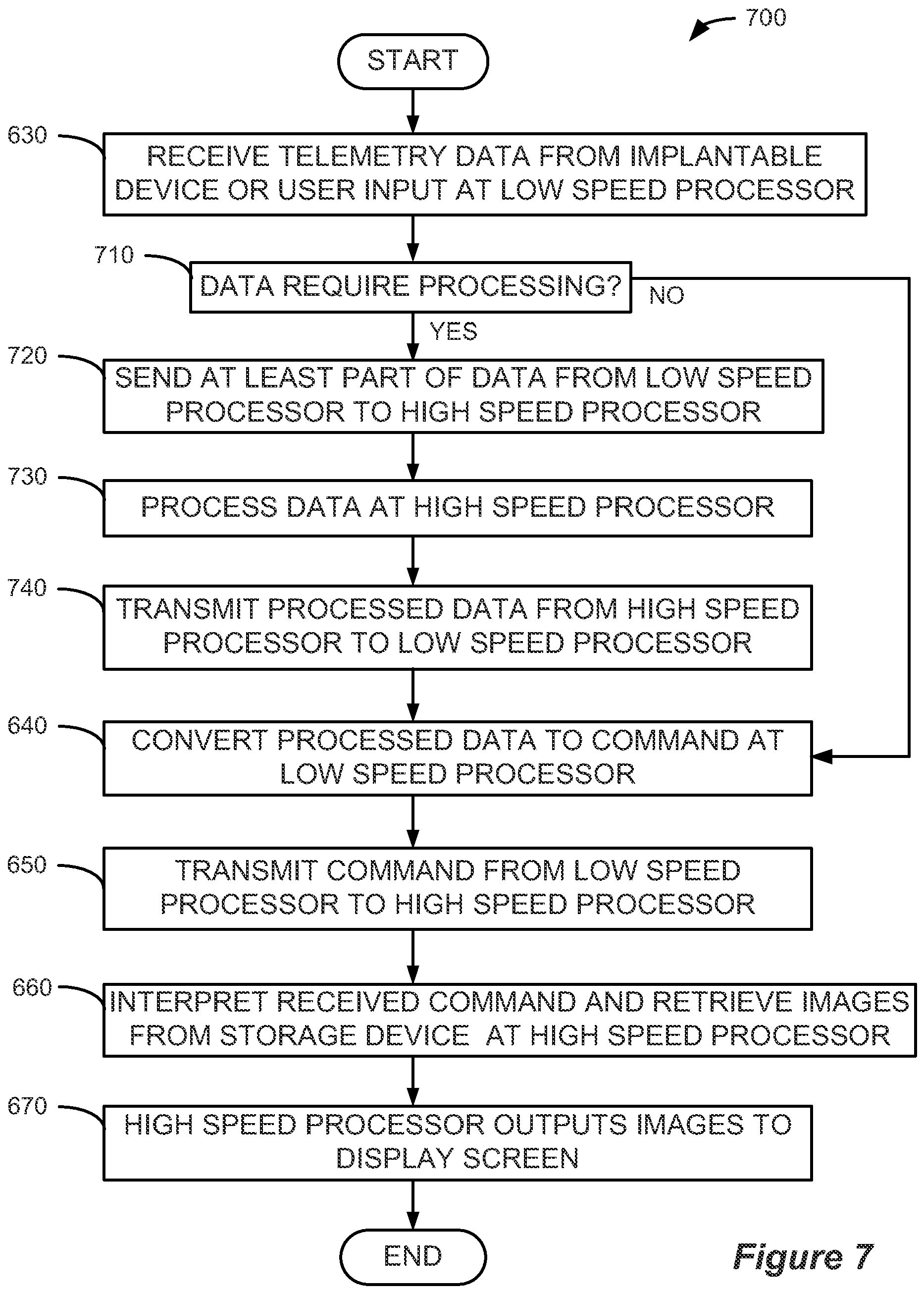