[0001] The present invention relates to a device for providing a pressure pulse for activating fluid pressure activated equipment in a fluid conveying pipe, where a section of the pipe wall includes a number of penetrating bores, and flexible membrane is arranged on the outside of the pipe section, said flexible membrane isolating a first fluid F1 in the fluid-conveying pipe from a second fluid F2 in another canal which is in fluidic communication with the equipment, wherein the membrane, on account of its elasticity, conveys pressure changes (pressure pulses) in the fluid F1 in the pipe to the fluid F2 in the other canal, as defined in the preamble of the appended claim 1.
[0002] In particular, the invention is concerned with a construction which is capable of supporting operation of down-hole equipment which is hydraulically operated.

[0003] It has been well known for a long time that, in connection with pressure-pulse activation of mechanical equipment installed down in an oil- or gas-well, there are challenges related to convey theses pressure pulses forward to the equipment.
[0004] This is especially pertinent when a pipe which is introduced down into the well is pressurized up to transmit these pressure signals down to the equipment. A problem that is that is often encountered is that, over time, there is formed an accumulation of particles in liquid, which eventually forms a solid mass at a bottom of the pipe, when such particles sink to the bottom. This is especially a problem when plugs are employed in the production pipe which operates in a manner to pump up pressure over the plug from the rig.
[0005] A manner of limiting the problem is to couple the equipment via a hydraulic control line (a conductor) which is disposed outside the existing pipe wherein the plug is mounted. Such a control lines are routed upwards and through the wellhead-installation and further up to the rig, such that it can be subject to pressure directly from the rig, and as a consequence one is still able to operate the equipment despite an accumulation of mud over the plug in the pipe.
[0006] The disadvantage of such a system is that, to a major extent, it renders operation more expensive and establishing a several kilometer long control line (conductor) introduces a risk that it is possible that the pipe which generally, for example, is a thin tube with a dimension ¼" (6.3 mm) is worn against walls of the well, and it is thereby possible to lose all control of the equipment.
[0007] A known solution is to use an kind of accumulator for introducing clean liquid into the well. Such a solution is described in Norwegian patent application no. 2008 0452. There is described an accumulator which includes a limited volume for supplying the equipment with clean liquid for operating it.
[0008] That which is described in said Norwegian patent application is a piston accumulator which pursuant to the description accumulates pressure during introduction into the well.
[0009] This system continues to result in a considerable number of problems associated with functionality.
[0010] First and foremost, it is claimed that debris (supply of contamination) are not able to penetrate into the system. But such a claim is incorrect, on account of it being known that a blockage of the canal upstream of the piston, as described, would not be able to convey the pressure pulses which are necessary for the system to function. It is correct that these particles would not be able to contaminate downstream of the piston which is to actuate the cyclic mechanism in the system, which is operable to open depending on a beforehand specified number of pressure pulses. The problem is namely that, by way of liquid communication through the canal up-stream for the piston, particles may enter into the chamber and thereby block the piston from moving, such that pressure differences can arise between upstream and downstream of the piston.
[0011] A cyclical-system which is based upon pressure differences would then cease to function.
[0012] In respect of the state-of-the-art, reference is also made to US patents Nos. US-2,964,116, US-2,898,088 and US-4.436.164.
[0013] In this respect, US-2,964,116 discloses a pressure pulse signalling system in a drill string, wherein a membrane in the form of a sleeve is placed on a perforated pipe section. The membrane transmits pressure pulses from a drilling fluid to a hydraulic fluid in a chamber, surrounding the perforated pipe section, to a conduit, and further to a pressure actuated equipment, as shown in column 4, lines 21-53, column 8, lines 15-20 and on figures 1 a and 2. US-2,898,088 shows a borehole logging system, incorporating a pipe section with a flexible, sleeve shaped membrane, which separates a fluid in the drill pipe form a hydraulic fluid in an outer chamber and in a conduit, the latter being connected to a fluid pressure actuated equipment. Thus, the membrane transmits fluid pressure pulses from the fluid in the drill pipe to the pressure controlled equipment.

[0014] It is a principal object of the invention to provide a new construction which is capable of solving the aforementioned disadvantages and problems.

[0015] The device pursuant to the present invention is characterized in that each bore through the pipe section wall defines a central concentric bore, in that each end of the bore forms a conical extension towards the inner wall and the outer wall of the pipe section, respectively.
[0016] The beneficial implementations appear in the dependent claims 2 to 8.
[0017] An advantage of this solution of having conical extended bores is that each hole is not so easily blocked permanently by slime and particles. A particle in the pipe fluid, which may bind and block the entrance to the bored hole will simply loosen and be pushed back again when the fluid flow is reversed. The particle will then be easier to be loosened by the back flow.
[0018] One of the advantages of the present invention, as defined, is that a piston which moves axial in a longitudinal direction will be limited in area which can be affected, whereas a bellows which moves radially is capable of providing an enormous area which can be affected. This area is limited only by the length of the bellow.

Description of the figures.

[0019] The present invention will now be described in more detail with reference to the accompanying diagrams.

Figure 1 is an illustration of a pipe which is installed within a borehole in, for example, a hydrocarbon-bearing formation, wherein the inventive device is employed.

Figures 2 and 3 are illustrations of the details of the inventive construction 10 in two positions, in that it is disposed a distance upstream in respect of down-hole equipment 20 which is be operated hydraulically pursuant to the present invention.

Figure 3B is an illustration of an elongate cross-section of a hole which is arranged in a radial direction through the pipe wall.

Figures 4 and 5 are illustrations of an enlarged portion of Figures 2 and Figure 3, and illustrates the hydraulic canal 30 through the pipe wall and which couples the pressure pulse device 10 with the equipment 20.

1. A device for providing a pressure pulse for activating fluid pressure activated equipment in a fluid conveying pipe (12), where a section (27) of the pipe wall includes a number of penetrating bores, and flexible membrane (24) is arranged on the outside of the pipe section (27),
said flexible membrane (24) isolating a first fluid (F1) in the fluid-conveying pipe from a second fluid (F2) in another canal (30) which is in fluidic communication with the equipment, wherein the membrane (24), on account of its elasticity, conveys pressure changes in the fluid (F1) in the pipe (12) to the fluid (F2) in the other canal (30), characterized in that
each bore (50) through the pipe section wall (27) defines a central concentric bore (56), in that each end of the bore (56) forms a conical extension towards the inner wall (121) and the outer wall (21) of the pipe section (27), respectively.

2. A device as claimed in claim 1, characterized in that each bore (50) extension has a cone shaped form, or substantially of trumpet-form.

4. A device as claimed in any of the preceding claims, characterized in that the membrane (24) is a sleeve-formed bellows, and the chamber is formed from a ring formed region surrounding the pipe section periphery.

5. A device as claimed in any of the preceding claims, characterized in that the flexible membrane provides a similar pressure on both sides of the membrane, which for example will contract, expand and contract itself back to its original form after an application of pressure.

6. A device as claimed in any of the preceding claims, characterized in that a burst-disk (162) is arranged in a bored hole/canal through the wall of the pipe (12/27) for defining a removable dividing plate between the first (F1) region in the fluid-conveying pipe having a first pressure (P1) and the second fluid (F2) region in the other canal having a second pressure (P2).

8. A device as claimed in any one of the preceding claims, characterized in that the burst-disk (62) is located in a bore hole through the wall at the top of the pipe section (27) where the bellows are mounted, for providing communication in an event that there arises a too high second pressure (P2) in the second fluid (F2) on the backside (P2) of the bellows and which is not similar to the first pressure (P1) in the first fluid (F1) within the pipe (12). 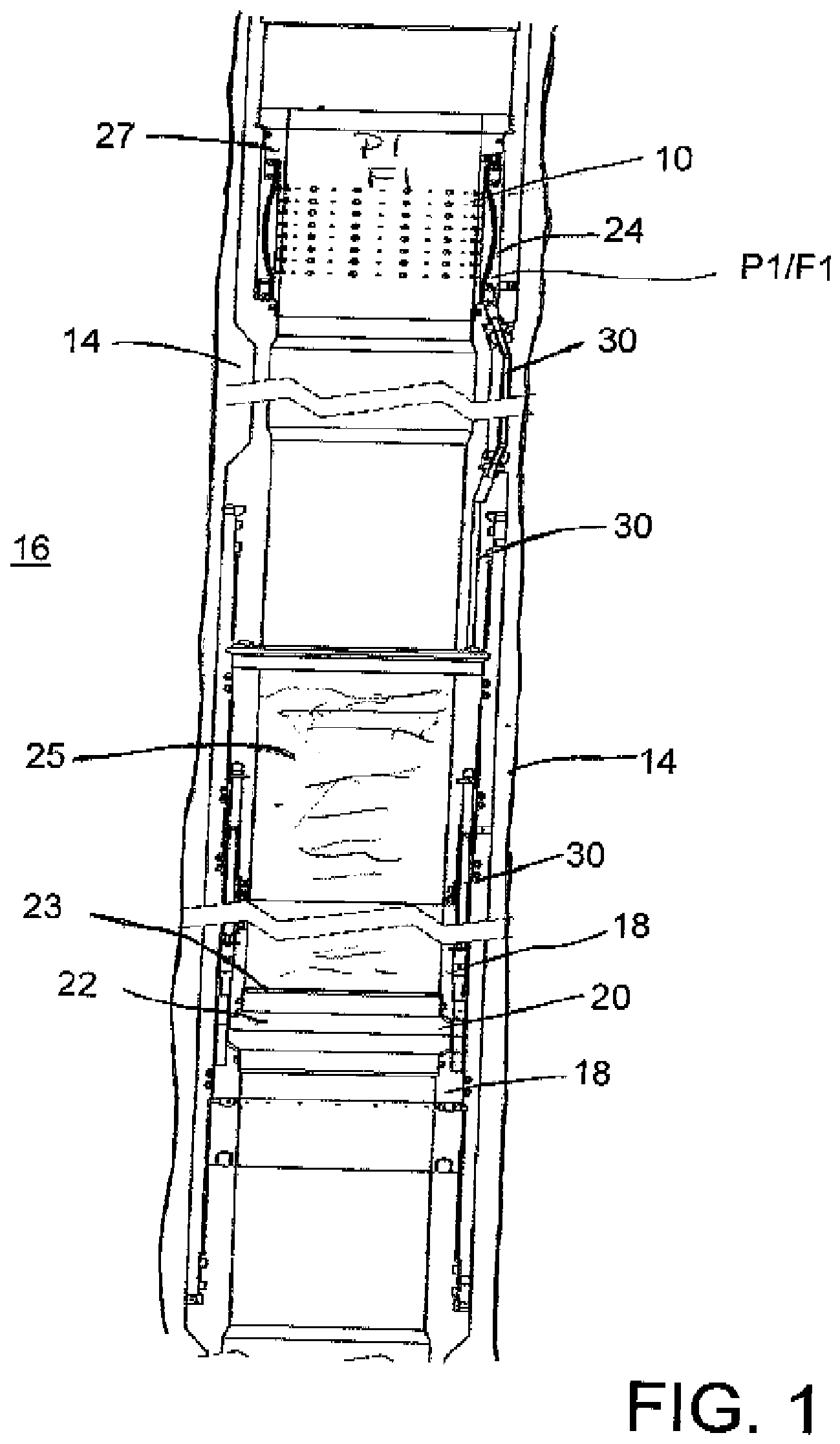 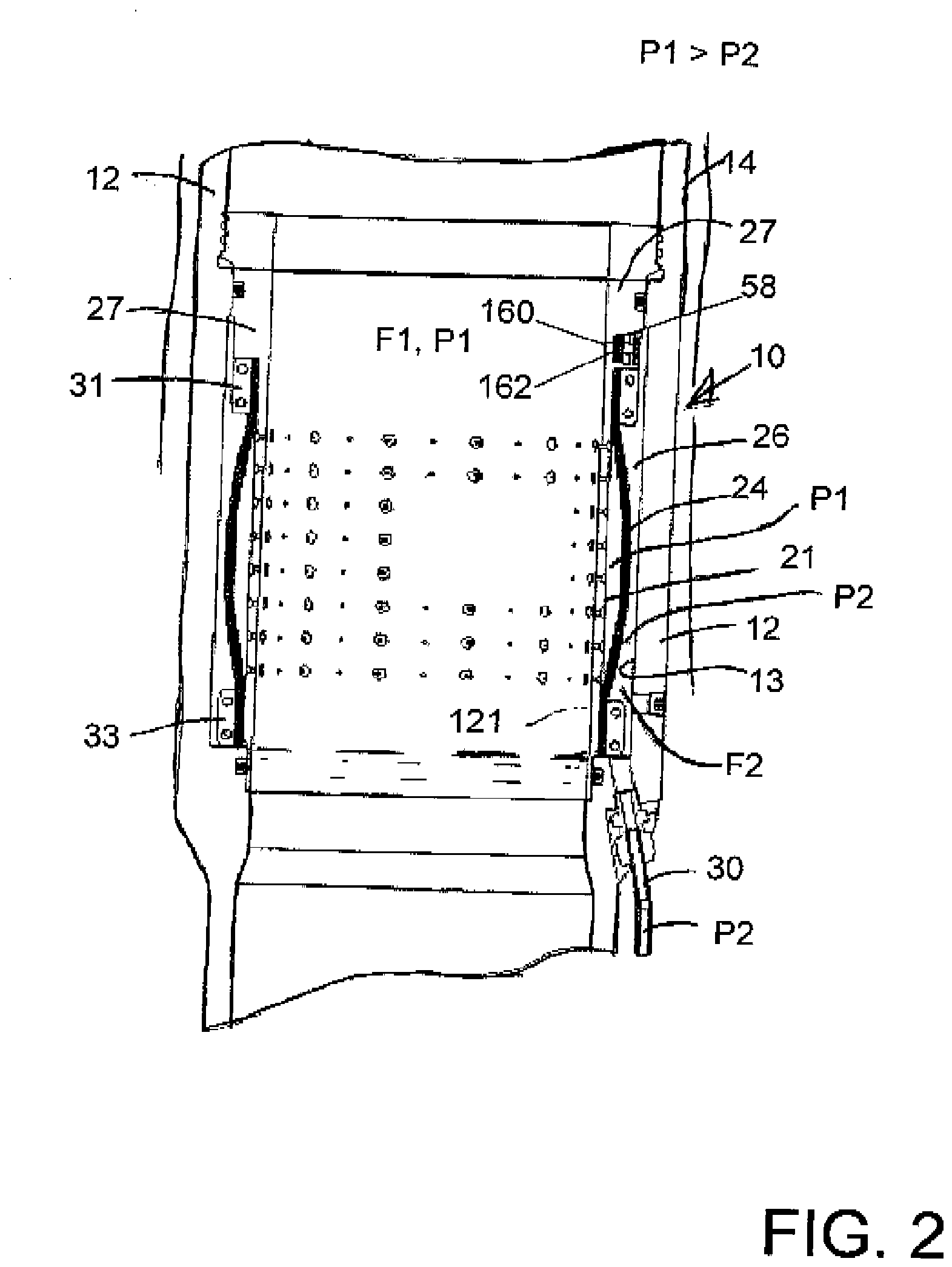 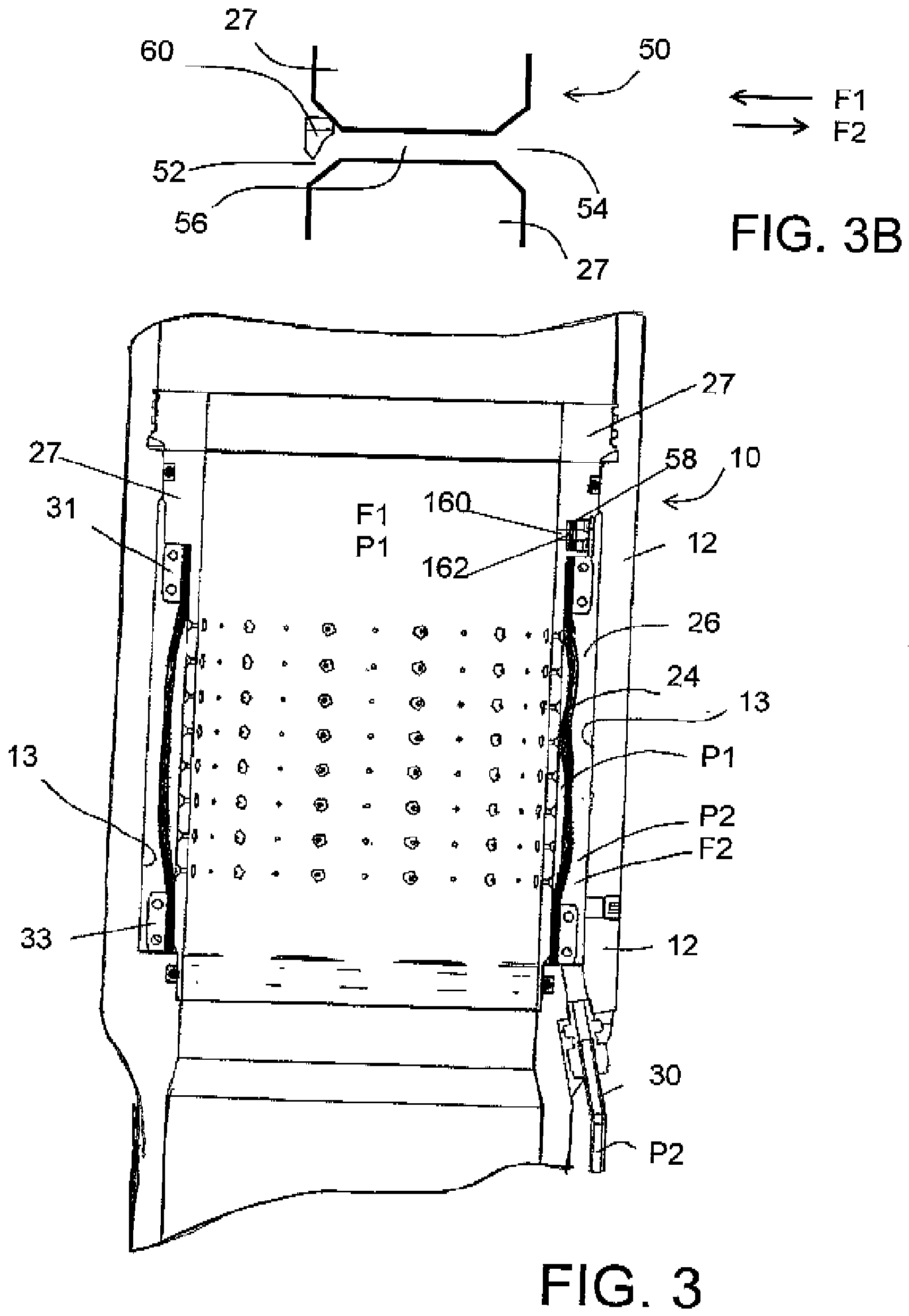 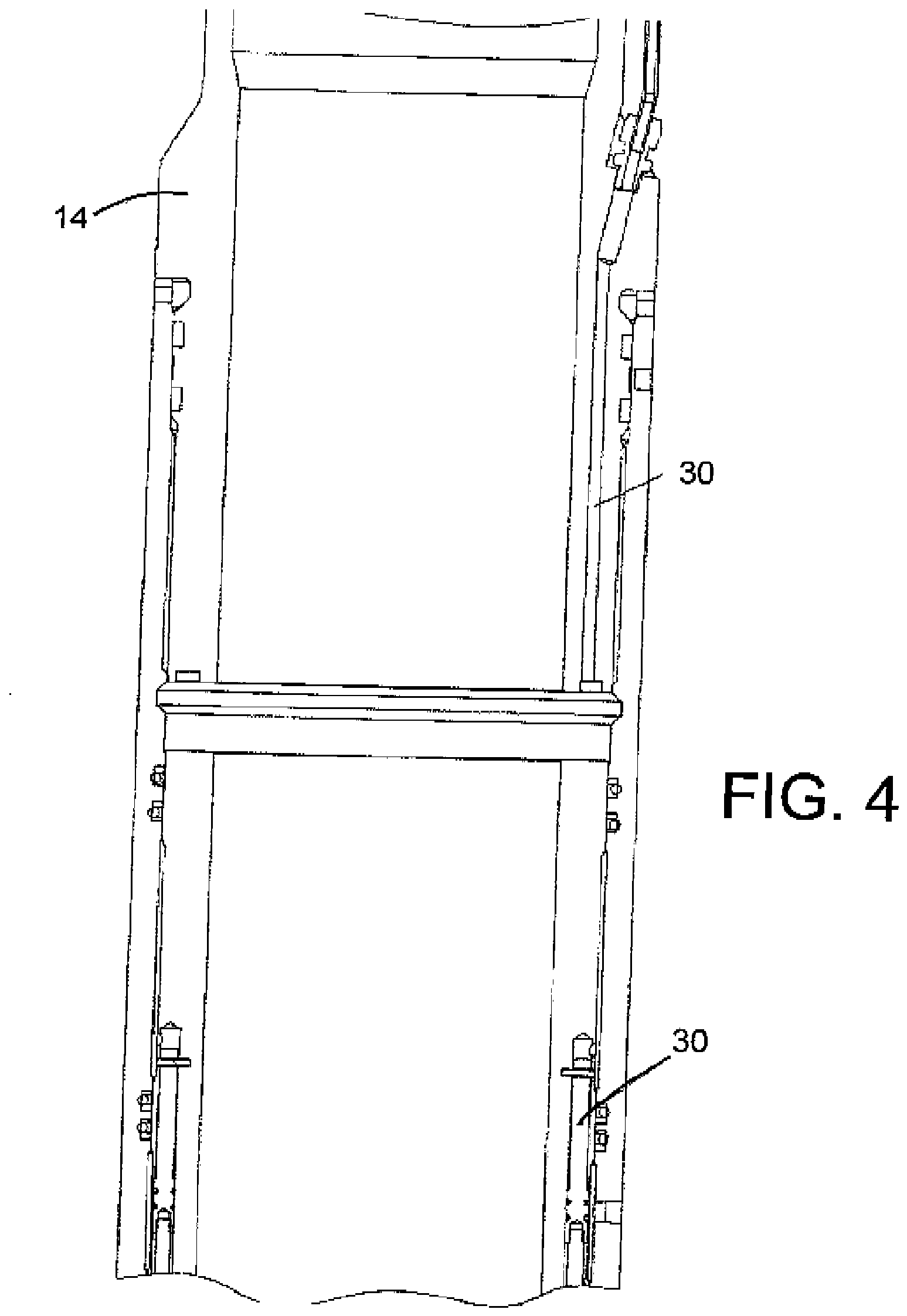 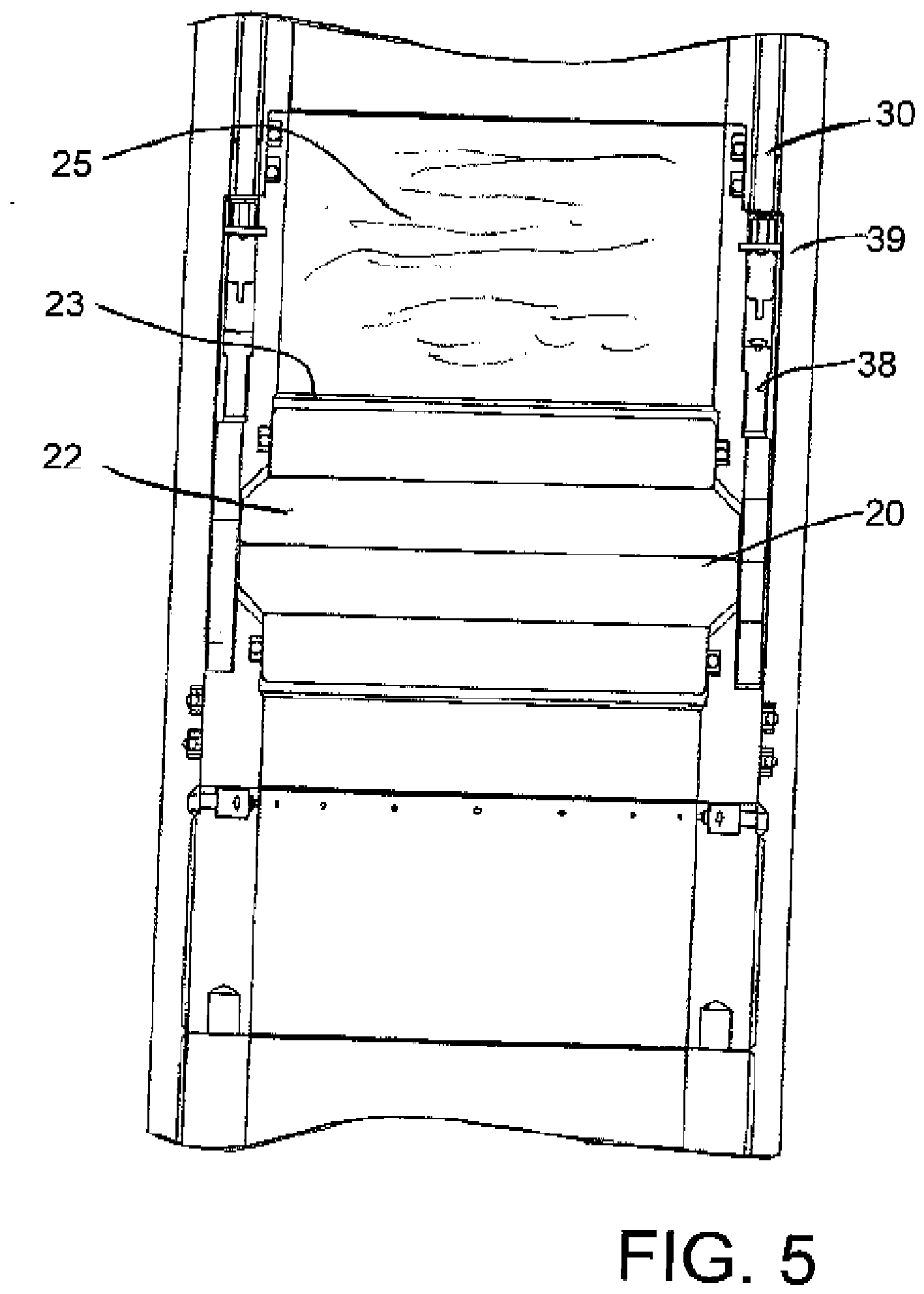