[0001] The present invention relates to linear accelerators, especially (but not exclusively) those for use in medical applications such as radiotherapy.

[0002] A linear accelerator ("linac") generally consists of an electron gun that accelerates electrons to relativistic speeds, an optional target onto which the electron beam is directed in order to produce an x-ray beam, and guidance apparatus to shape and direct the resulting electron or x-ray beam as required.
[0003] The guidance apparatus for a linear accelerator intended for medical use generally comprises a primary collimator, to limit the beam into a generally conical shape, one or more of a range of filters to adjust the energies present in the beam and/or to adjust the distribution of those energies, and various secondary collimators such as block collimators and multi-leaf collimators. The primary collimator and any filters aim to create a uniform generic wide-aperture x-ray or electron beam, which is then shaped as required for a specific treatment by the secondary collimation.
[0004] The filters that are available for use in such apparatus usually include sections of solid material (such as Nickel) which have an x-ray absorption spectrum corresponding to an energy which needs to be removed from the x-ray beam, flattening filters which have a varying thickness (or other property) across the field of the beam so as to alleviate irregularities in the beam intensity across that field, and (for electron beams) filters having a material and a thickness able to condition the beam and/or preserve the vacuum within the linear accelerator.
[0005] At present, such beam modification filters have to be positioned between the primary collimator wheel and the secondary collimation device. They are usually placed in or on a rotating carousel, which is permitted to rotate freely in a manner that does not interfere with the collimator structure. The filters will however produce scattered X-radiation (as will any object placed in the beam), so further shielding needs to be put in place around the filters to prevent unwanted leakage radiation escaping from the head. This in turn increases the mass of the head and hence the mechanical load on the head support arm.
[0006] Current linac construction is therefore tailored to the needs of each customer, by placing into each linac machine during construction the combination of filters and beam modifiers that are needed in order to allow the beam energy options that the customer has chosen.
[0007] US4198570 discloses a system in which the electron target and beam modification components are contained within a primary collimator. The source, collimator and filter all remain in the same unitary assembly, and there seems to be no ability to interchange different filters.
[0008] US2011/0075815 discloses a system where the beam filters for a radiotherapeutic device are on a wheel that can rotate through an electron beam. The rotating plate can also be translated along an axis to allow the positioning of a light field generator for beam verification.
[0009] WO2009/138753 discloses a linear accelerator able to provide both a therapeutic (MV) radiation beam and an investigative (kV) radiation beam. A pair of primary collimators are provided, on a common sliding substrate so that one or the other can be located in the path of the electron beam produced by the accelerator. Each has an associated target, so that one produces MV x-radiation and the other produces bremsstrahlung x-radiation at kV energies. The latter has an associated electron absorber located within the primary collimator. Further interchangeable filters are provided on a carousel after the primary collimator, to condition the x-ray beams for use.

[0010] The present invention therefore provides radiotherapy apparatus comprising a linear accelerator for producing a beam of electrons, optionally an x-ray target for producing a beam of ionising radiation from the electron beam, a primary collimator for delimiting the thus-produced beam to a first extent, at least one variable-geometry collimator for delimiting the beam to a second and lesser extent, wherein the primary collimator consists of a plurality of layers arranged transversely to the beam, each layer having a plurality of apertures and being independently movable so as to bring a selected one of the apertures into the path of the beam, thereby to define a complete collimator shape made up of an aperture from each layer.
[0011] The x-ray target can be permanently present so that the thus-produced beam is always an x-ray beam, or it can be omitted completely such that the thus-produced beam is always an electron beam, or is can be present within the machine and movable so as to allow the thus-produced beam to be an electron beam or an x-ray beam according to the choice made by the operator. In the latter circumstance, the x-ray target can be movable between a position in which it is located in the electron beam so as to substantially absorb the electron beam and produce an x-ray beam, and a location in which it is located substantially outside the electron beam.
[0012] The layers making up the plurality of layers can be movable by rotation, or by translation. It will usually be easier if either all layers are movable exclusively by rotation, or all layers are movable exclusively by translation, but an arrangement in which some are movable by rotation and some are movable by translation can be envisaged.
[0013] One or more filters for the beam can be placed within the apertures. In this way, a filter can be moved into or out of the beam easily by appropriate selection or de-selection of that aperture that contains it. Ideally, several of the apertures contain a filter; these may be in the same layer (so as to allow a choice of filters) or in different layers (so as to allow filters to be combined). The filters can be of a different nature, such as to allow the desired effect to be produced or to cater for the different types of beam (electron or x-ray).

[0014] An embodiment of the present invention will now be described by way of example, with reference to the accompanying figures in which;

Figure 2 illustrates a primary collimator according to the present invention; and

Figures 3, 4, 5 and 6 show alternative embodiments of the multi-layer collimator.

a primary collimator for delimiting the thus-produced beam to a first extent;

at least one variable-geometry collimator for delimiting the beam to a second and lesser extent;

wherein the primary collimator consists of a plurality of layers arranged transversely to the beam, each layer having a plurality of apertures and being independently movable so as to bring a selected one of the apertures into the path of the beam, thereby to define a complete collimator shape made up of an aperture from each layer. 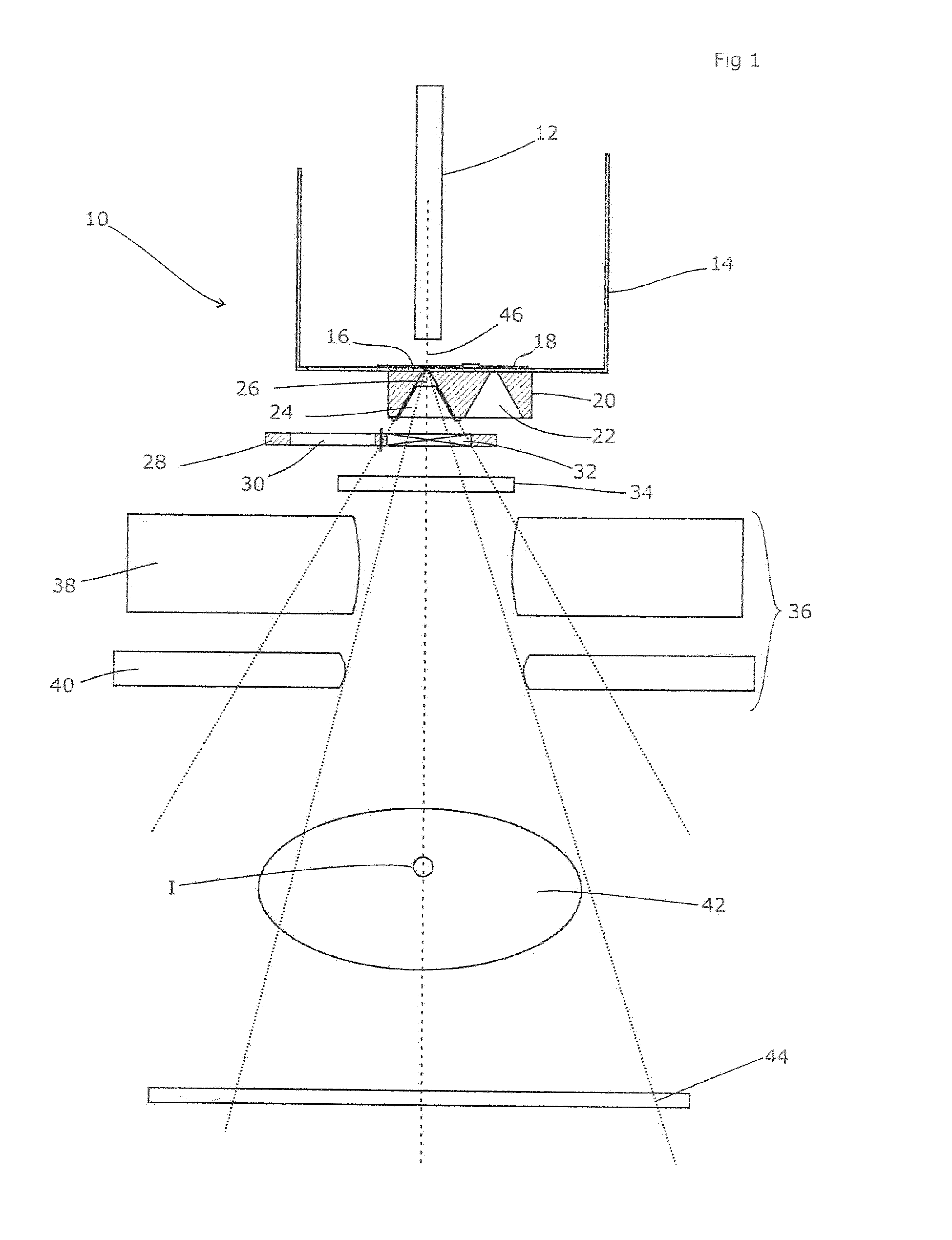 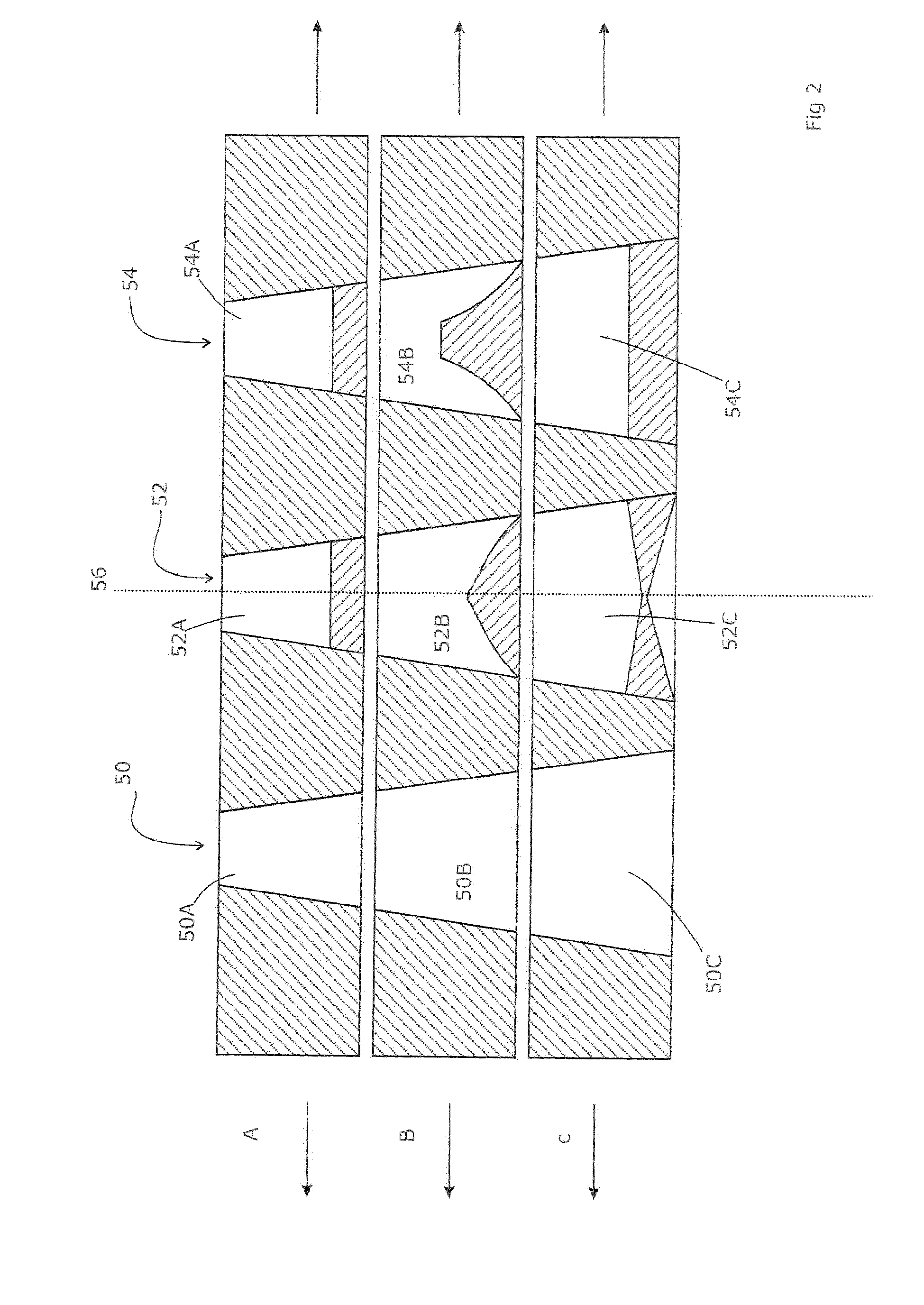 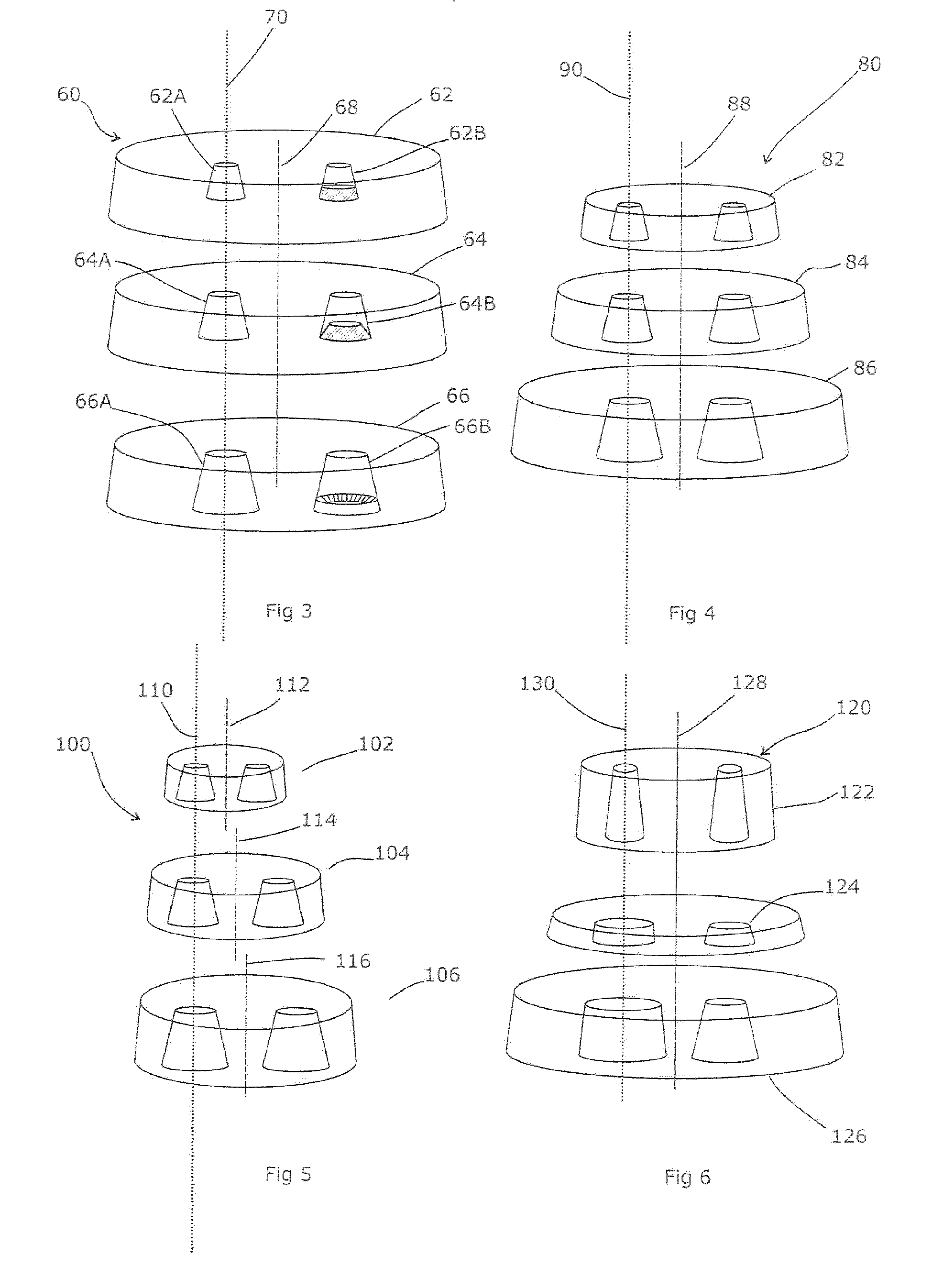 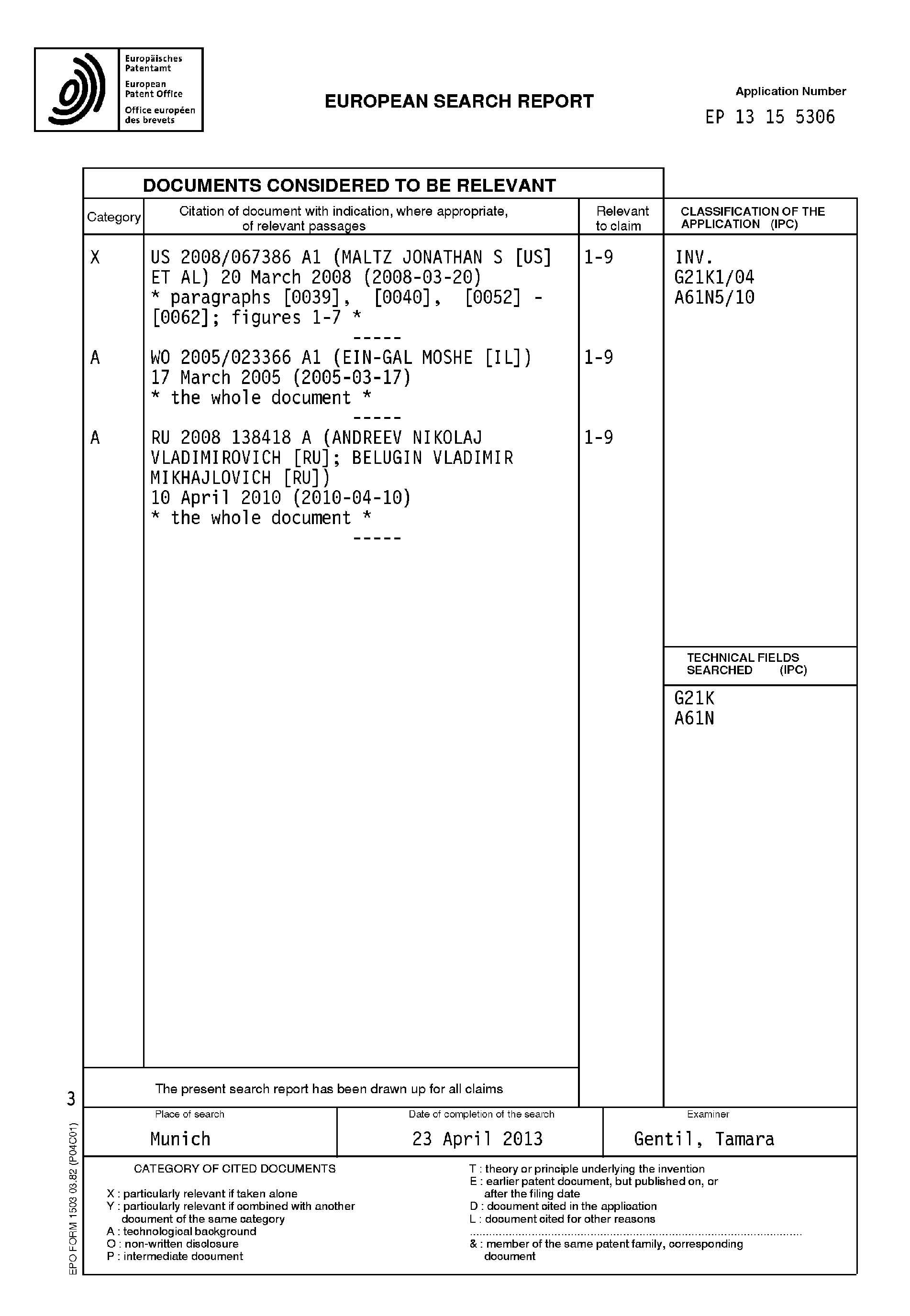 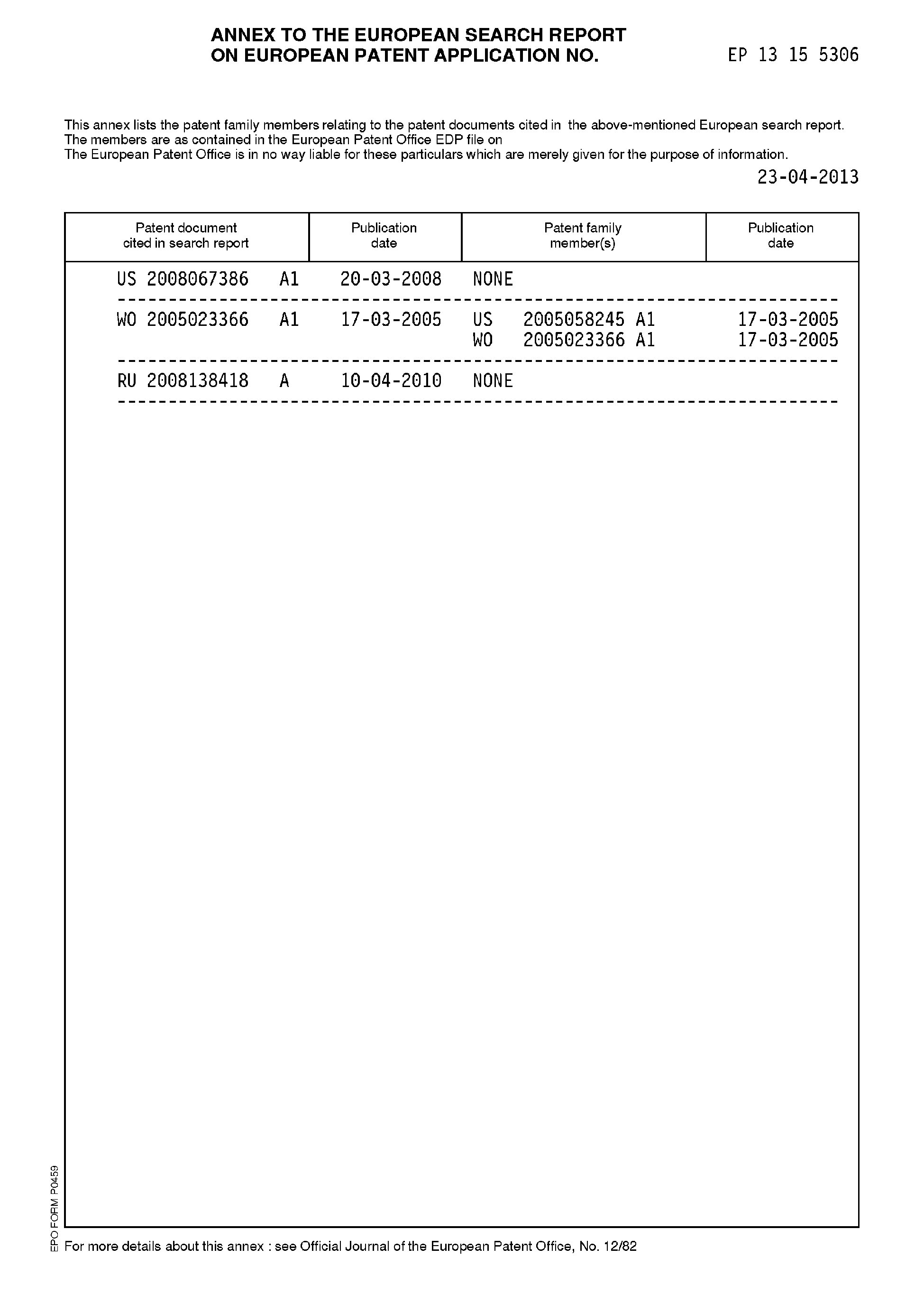