[0019] According to an aspect of the present invention, there is provided oral dosage composition for use in the treatment of male erectile dysfunction wherein the composition comprises at least 250 mg of ginser or a ginger derivative wherein said ginger derivative is selected from the group consisting of fresh, partially dried or dried ginger, G-gingerol and mixtures thereof, the composition further comprising at least one of L-citralline and L-arginine.
[0020] A dosage form of the composition contains an amount of each ingredient sufficient when administered for a sufficient period of time to produce a beneficial effect in treating ED or ARED, wherein the beneficial effect includes at least one of slowing, stopping or reversing worsening symptoms of ED or ARED, slowing, stopping or reversing the appearance of symptoms of ED or ARED, shortening refractory period between erections, and/or reducing, slowing or stopping increases in refractory period between erections. In an embodiment, indicia of ED or ARED are treated and/or indicia of satisfactory sexual experience are improved, for example duration and/or reduction or elimination of pain during or following sexual activity.
[0021] A preferred embodiment of a pharmaceutical composition in accordance with the first aspect of the present inventions is characterized in that it comprises:

a dosage form having at least 250 mg ginger or ginger derivative, and an effective amount of L-citrulline, wherein said composition can be administered in periodic dosages for a sufficient period of time to treat erectile dysfunction or age related erectile dysfunction.

[0022] An alternative preferred embodiment of the pharmaceutical composition of the first aspect of the present invention is characterized in that it comprises:

a dosage form having at least 250 mg ginger or ginger derivative, and an effective amount of at least one of group consisting of L-citrulline and L-arginine, said composition preferably having the essential absence of ginseng, wherein the ingredients essential for treating erectile dysfunction in said dosage form are said ginger and at least one member of the group consisting of L-citrulline and L-arginine. wherein said composition can be administered in periodic dosages for a sufficient period of time to treat erectile dysfunction or age related erectile dysfunction.

FURTHER DETAILS OF THE INVENTION

[0038] Experiments in vitro demonstrated that ginger, also known as Zingiber officinale roscoe (ZOR), at low dosages in the presence of LPS did not appear to stimulate iNOS production. However, the present inventor made the surprising discovery that at higher dosages extracts or vegetable matter derived from ZOR, e.g. 500 mg/L, in the presence of LPS stimulates iNOS. The present inventor also surprisingly discovered that vegetable matter derived from ginger, without separating its ingredients and without the presence of LPS, can cause sufficient stimulation of iNOS to enable much lower dosages of ginger to be used effectively in compositions of the present inventions to treat and prevent ED. For example, in Table 1 below are presented nitrite production data from in vitro experiments with cells incubated with varying amounts of ginger without LPS.
[0039] The nutraceutical or pharmaceutical compositions of the present inventions are administered in a pharmaceutically effective amount to treat erectile dysfunction. Treatments can consist of either short term self administered oral dosages taken periodically, e.g. at least once a day or other period of time in between dosages until the desired effect is reached or as part of one's long term, even life time, daily nutrition.
[0040] The present inventor found with in vitro experiments that dosages of ginger low enough to be practicable for routine administration are capable of use to treat ED when used in the compositions and methods of the present inventions. Also, by varying the ratio of ginger to other ingredients, the formulations and dosing schedule can be optimized for specific patients and/or patient profiles. One method to determine patient profiles is by obtaining a biopsy of the penile tissue to evaluate the integrity of the CSM cells. Obtaining biopsy specimens of penile tissue can be performed in a relatively painless manner, either during the performance of other surgical procedures e.g. during prostate surgery or even an office visit at which an analgesic/local anesthetic can be used prior to the biopsy. See Schwartz, Eric, et al., "Sildenafil Preserves Intracorporeal Smooth Muscle After Radical Retropubic Prostatectomy," The Journal of Urology, Vol 171, pp. 771-774, February 2004. In the alternative, blood or other non-penile tissue may be obtained for DNA analysis. Patients at risk for developing ED can be identified by these various methods. Whether via biopsy or other means e.g. DNA analysis, patients susceptible to ED can be identified and treatment with formulations of the present invention or other treatments can be started prior to ED symptoms becoming sufficient to interfere with normal sexual function. In fact, in some cases it is believed that a decrease in smooth muscle cells may be reversed sufficiently to allow patients to improve their erectile function.
[0041] In an embodiment, erectile function can be monitored via the International Index of Erectile Function Questionnaire. By use of this standard questionnaire, a large number of patient histories, with identities redacted, can be combined with questionnaire results to generate statistically significant data when compared with questionnaire results following administration of different compositions (or placebo). Presented below is a questionnaire for use in obtaining "IIEF scores": 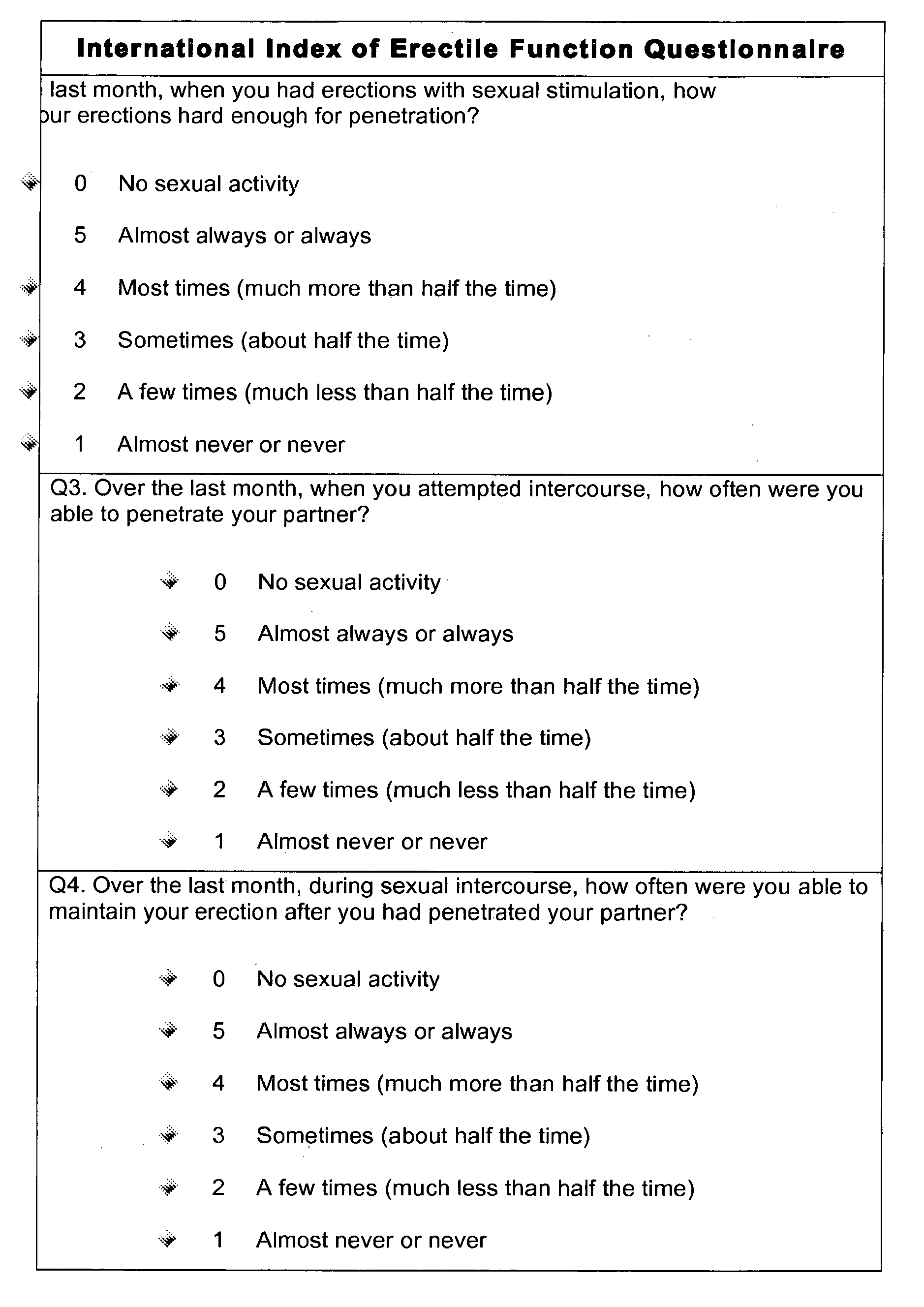 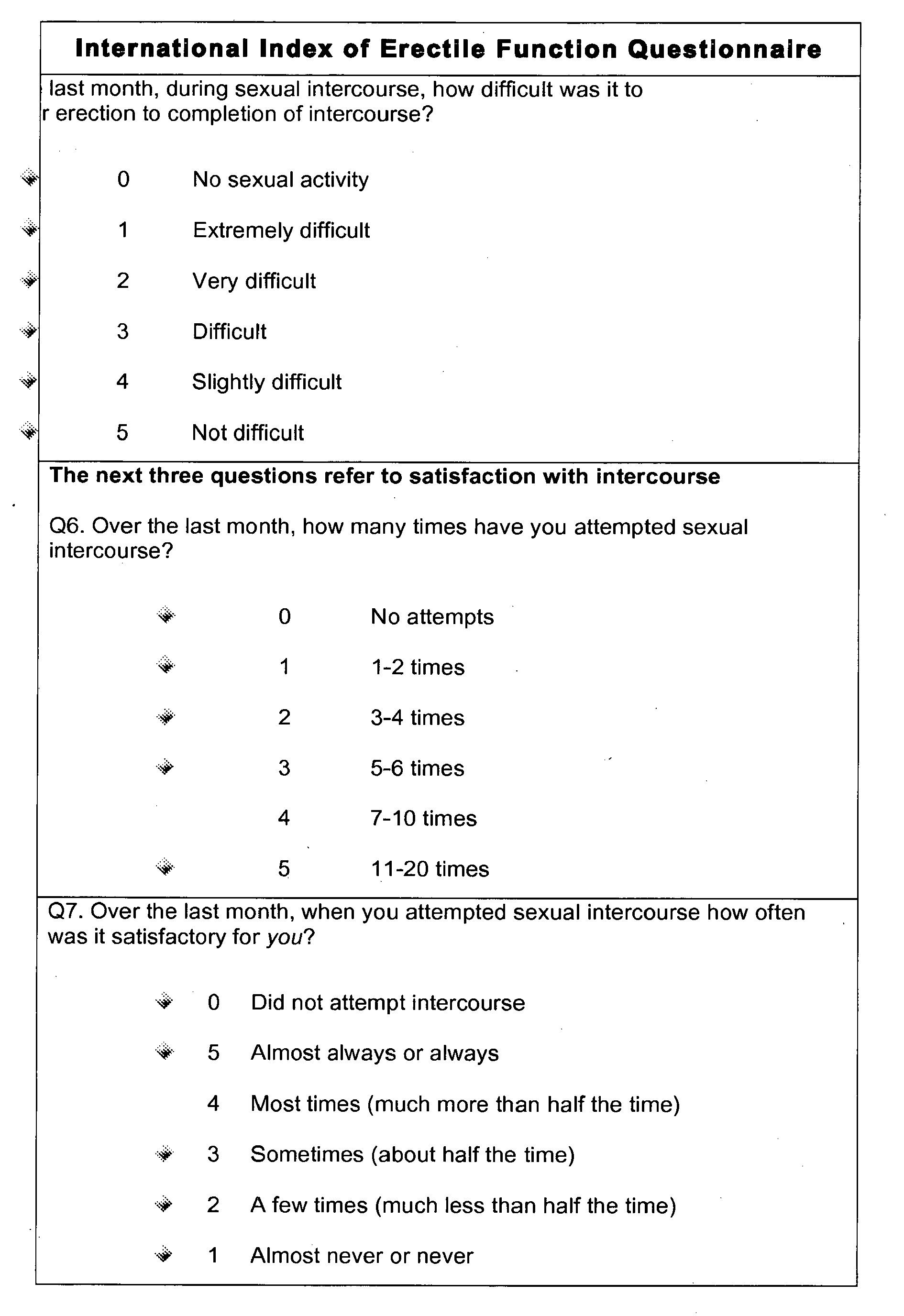 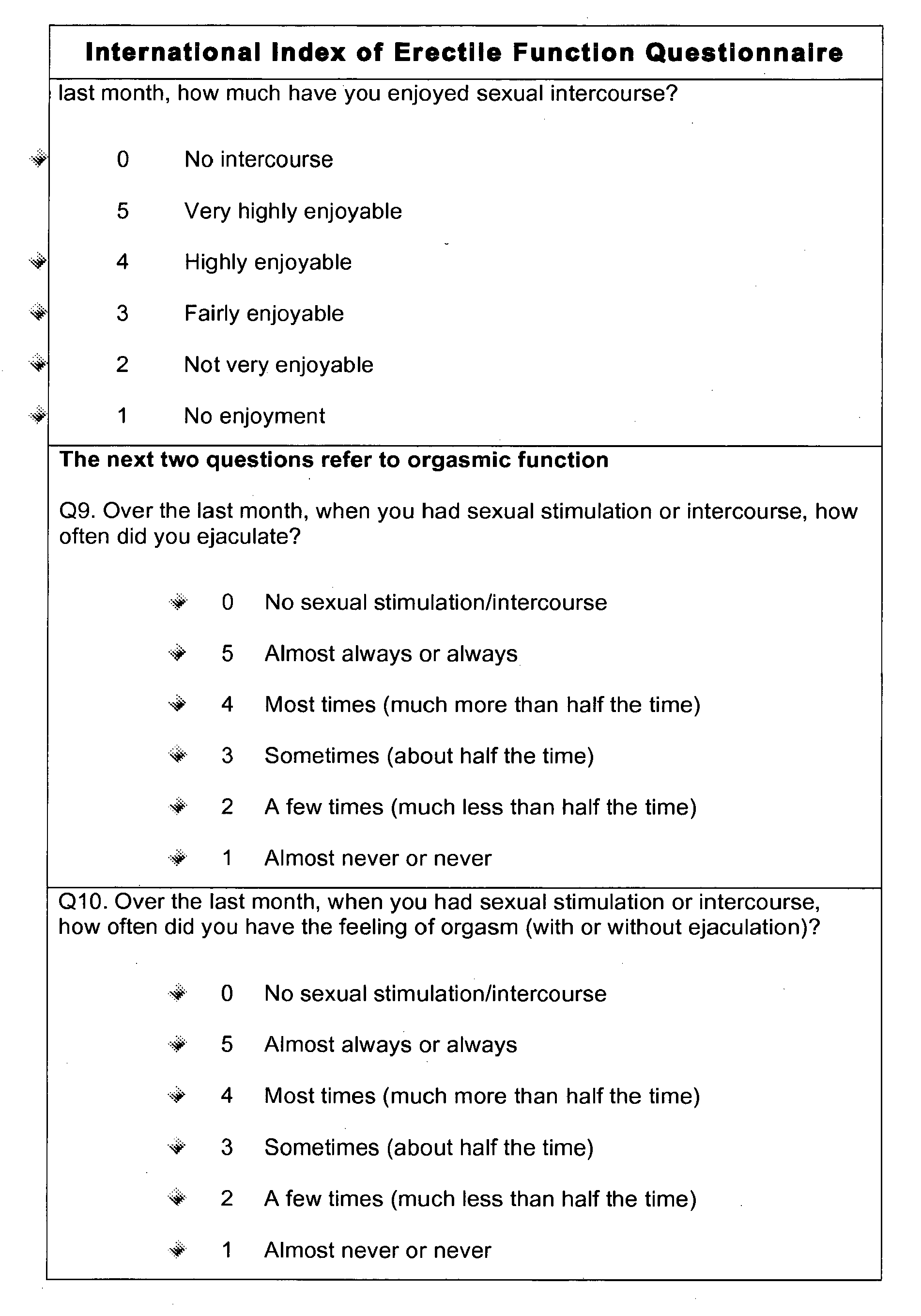 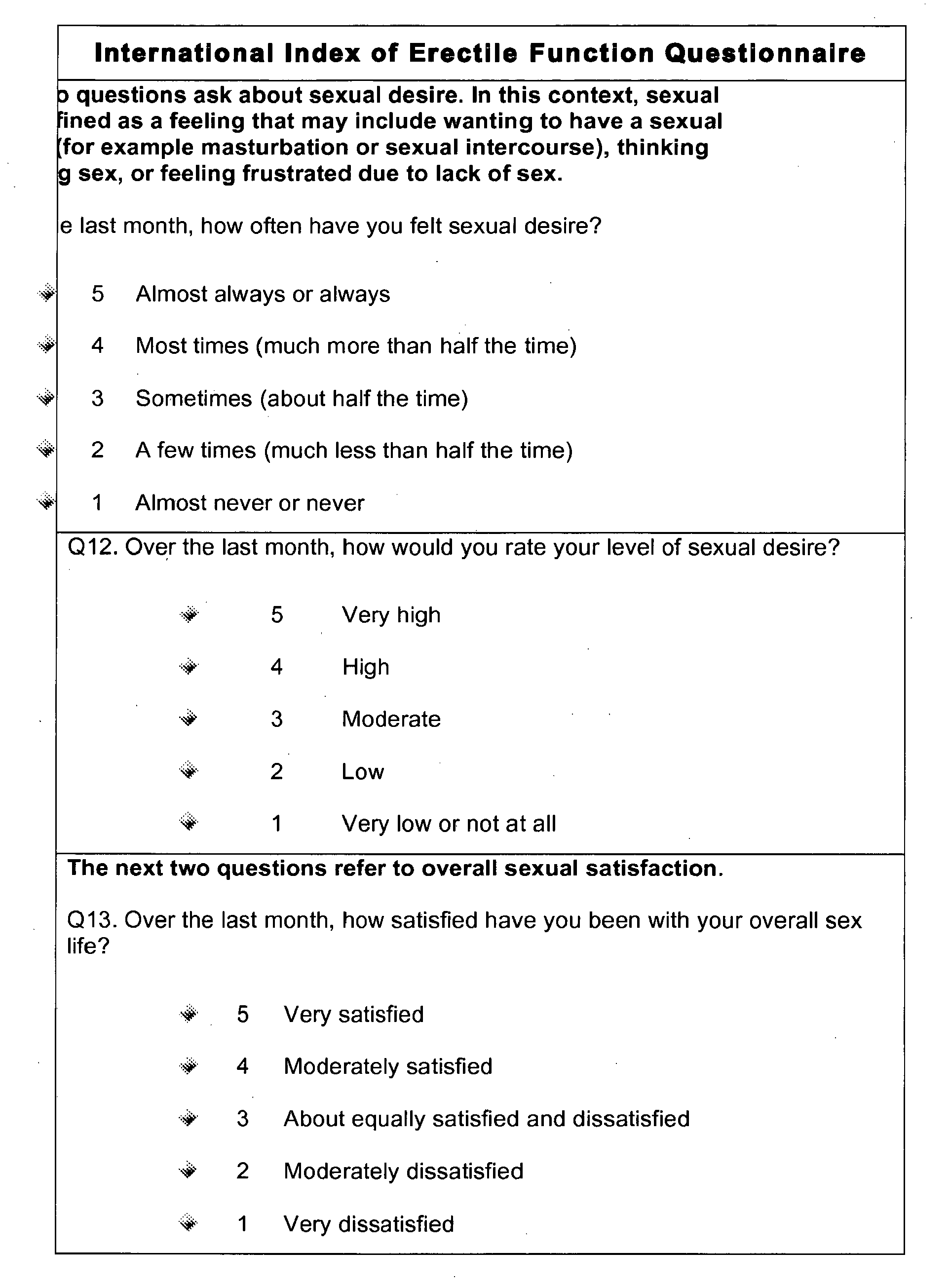 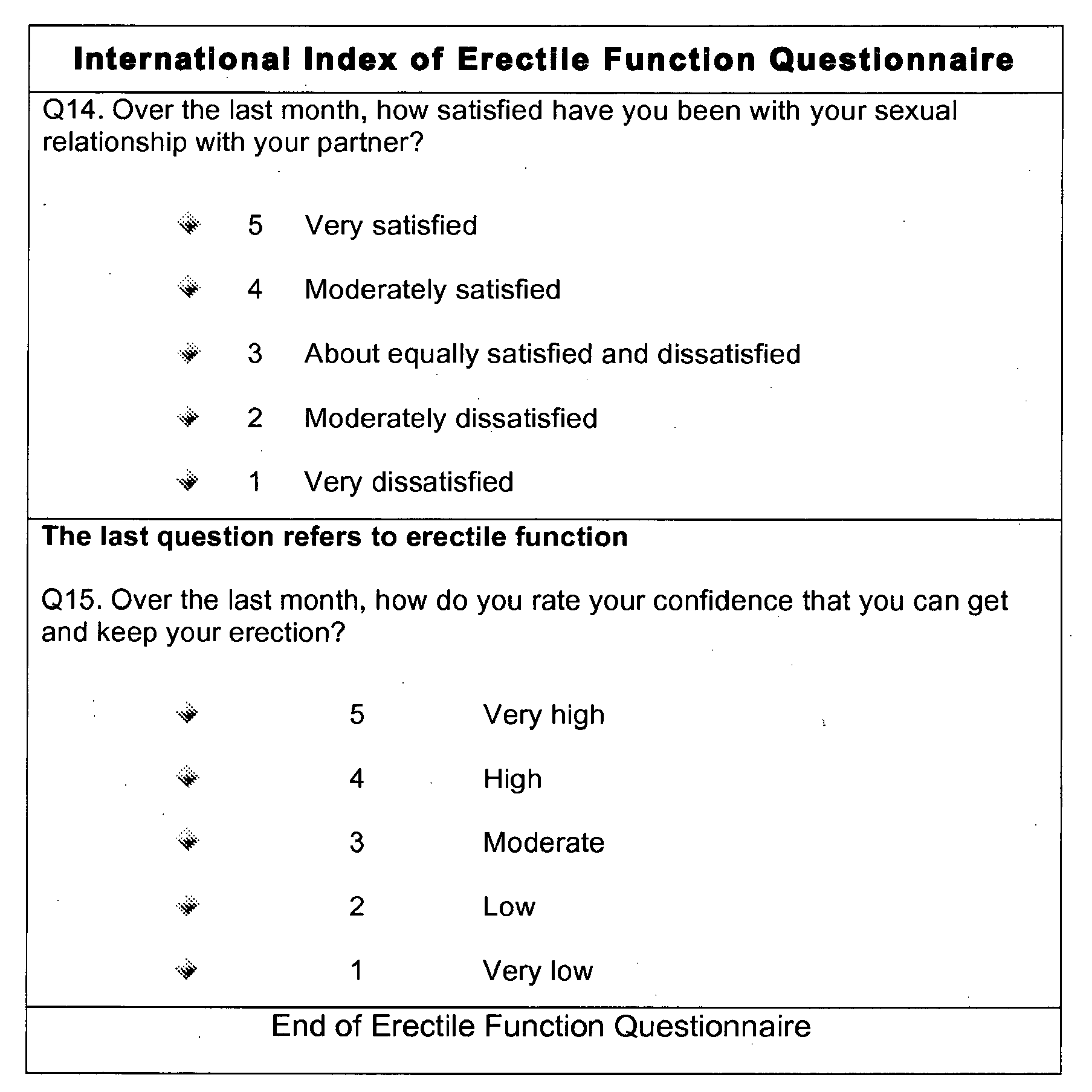 [0042] In an embodiment, a composition for the treatment of erectile dysfunction may further include cortex magnoliae officinalis and/or fructus aurantil immaturus (also referred to hereinafter as "CMO" and "FAI" respectively). While not wishing to be limited to a particular theory of pharmacologic action, these compounds stimulate nitric oxide). Thus, the beneficial agents in the compositions of the present inventions for treatment of ED and/or ARED are ginger, at least one of L-arginine and L-citrulline, Muira puama, Paullinia cupana, CMO and FAI. However, the first two ingredients (ginger and at least one of L-citrulline and L-arginine) are essential in the compositions and their ability to treat ED and ARED.
[0043] Ginger is a complex natural composition having numerous purported properties when used alone and/or combination with other compounds. For example, traditional Chinese medicines have used or included ginger in compositions to treat or prevent various maladies based on a variety of metaphysical reasons. Over the past century, scientific methods have shown that many traditional Chinese medicines do not produce the purported effects and/or may even make the target maladies worse. Nevertheless, some traditional Chinese medicines have been found to contain active agents that may be of medical use, even if not effective or safe for the use purported by traditional Chinese medicine. The complexity of ginger and its myriad properties is reflected by certain constituent compounds which have the following structure:

wherein, for example, in 6-gingerol the R sidechain of the vanillyl function group (i.e., 4-hydroxy-3-methoxyphenyl group) is:

Thus, 6-gingerol (also called gingerol) is (S)-5-hydroxy-1-(4-hydroxy-3-methoxyphenyl)-3-decanone and has the following structure: