Fig. 1 schematically shows a triplex pump with vibration sensors attaches to each valve block of the pump as well as a rotary angle transmitter positioned at the pump shaft;

Fig. 2 shows the same as in fig. 1 of a quintuplex pump where only one vibration sensor is attached to a common valve block; and

Fig. 3 shows a graph illustrating a raw vibration signal as a function of time, as well as a signal that is processed by used of a method according to the invention as a function of shaft angle.

[0042] On the drawings the reference numeral 1 denotes a so-called triplex pump, below termed pump, provided with three individually acting pistons 2, extending through their respective cylinders 4. Only the first piston 2 and corresponding cylinder 4 is shown. The cylinders 4 communicate with an inlet manifold 6 through their respective suction valves S1, S2 and S3, and an outlet manifold 10 through their respective discharge valves D1, D2 and D3, see fig. 1.
[0043] The first suction valve S1 and the first discharge valve D1 are built into a first valve block 14' that communicates with the first cylinder 4. In the same way the second suction valve S2 and the second discharge valve D2 are built into a second valve block 14", and the third suction valve S3 and the third discharge valve D3 are built into a third valve block 14"'.
[0044] On smaller triplex pumps, the valve blocks 14', 14" and 14'" may be parts of a common piece of metal.
[0045] A first vibration sensor 16' that communicates with a computer 18 through a first cable 20', is attached to the first valve block 14'. A second vibration sensor 16" that communicates with the computer 18 through a second cable 20", is attached to the second valve block 14", while a third vibration sensor 16'" that communicates with the computer 18 through a third cable 20'", is attached to the third valve block 14'".
[0046] A rotary angle transmitter 22 that communicates with the computer 18 through a fourth cable 20"", is arranged to give one pulse signal pr revolution of the crankshaft 24 of the pump 1.
[0047] The computer 18 is equipped with a screen 26 and a loudspeaker 28.
[0048] The sensors 16', 16" and 16'", the transmitter 22 and the computer 18 are of types that are known per se, and the computer 18 is programmed to carry out the calculations in question.
[0049] Vibrations sensed from the valve blocks 14', 14" and 14'" are picked up by the vibration sensors 16', 16" and 16'" respectively, and transmitted as signals to the computer 18.
[0050] The signals are prepared as described in the general part of the description and displayed on the screen 26. Alarms may be given trough the loud speaker 28.
[0051] When a leak is developing, a distinctive "hizzing" noise that appears at regular intervals, may be transmitted through the loud speaker 28. The loudness of the hizzing noise increases as the leak develops.
[0052] In fig. 2 a quintuplex pump 28 is shown having only one vibration sensor 16 attached to a valve block 14. A first suction valve S1 and a first discharge valve D1 of the pump 28 are shown.
[0053] In fig. 3, upper subplot, the raw signal a from the sensor 16 from a test is shown as a function of time. The upper subplot thus shows the raw accelerometer signal a, scaled in g, during a 2 s period. The window function wS1, which represent the theoretical closing interval of the suction valve S1, is included for easy interpretation. This window function is calculated from a timer signal, not shown here, by the method described in the general part of the description. The pump speed varied slightly from about 135 spm at start of record to 127 spm at the end and the discharge pressure was about 70 bar. The upper subplot clearly shows that the discharge valve D1 is leaking because of the enhanced vibration level during the closing phase of D1 (complementary phase to the shown S1).
[0054] The lower subplot that is plotted against shaft angle in revolutions, shows the envelope acceleration aenv after smoothing it with a 200 Hz low pass filter. The window function w1 in the lower subplot is the leak window found by Fourier analysis as described by the steps e-g in the algorithm in the general part of the description. The center point, illustrated by a circle in the lower subplot, of this window represents a pump shaft angle of -84°. This value matches almost perfectly with the theoretic value of -90°, taking into account that no lag shift corrections are applied. The vibration level ratio in leaking and non-leaking phases is determined to be 8.6, far exceeding a leak detection threshold typically set to 1.5.

1. A method for detecting and localizing a valve leak in a piston machine (1) having a shaft 24
, where the method includes:

- transforming the vibration signals from all vibration sensors (16', 16", 16"') into one envelope signal representing the instant vibration level,:

- using the window functions to find sector-based averages of the vibration level, and

- comparing said averages with a critical ambient vibration level to detect and localize leaks in one or two valves, characterized in that the method further includes:

- determining the centre angle of the envelope vibration signal by Fourier analysis;

- using these window functions and the envelope function to find the average signal level in said sectors; and

- setting a leak alarm if the highest vibration level exceeds a critical value; and

- determining, if the leak alarm is set, the leaky valve as the valve having its closing sector nearest to the window sector of highest vibration level.

2. A method according to claim 1, characterized in that the method further includes:

- setting a critical vibration level that triggers a leak alarm equal to a multiplicative factor times the minimum value of sector based vibration levels.

3. A method according to claim 1 or 2, characterized in that the method further includes:

- setting a critical vibration level that triggers a leak alarm to a value that is either calculated from an empirical formula as a function of pump speed and discharge pressure, or picked from a look-up table, and where in both cases past measurements of normal ambient vibrations are incorporated.

4. A method according to claim 1 to 3, characterized in that the method further includes:

- presenting the actual leaking valve or valves for a human.

5. A method according to claim 1, characterized in that the method further includes:

- attaching a sensor (22) to the piston machine (1) where the sensor is designed to produce a digital timer signal with one pulse per revolution;

- determining all timer events when the timing signal turns from a low value to a high value or from high value to low value;

- finding the corresponding revolution periods from the difference between successive timer events;

- applying a suitable 1D interpolation/extrapolation method to find the angular pump speed for all time samples;

- calculating the difference between said accumulated angle and the real angular shaft position at the first timer event; and

- finding the pump shaft position as the accumulated pump angle minus said difference. 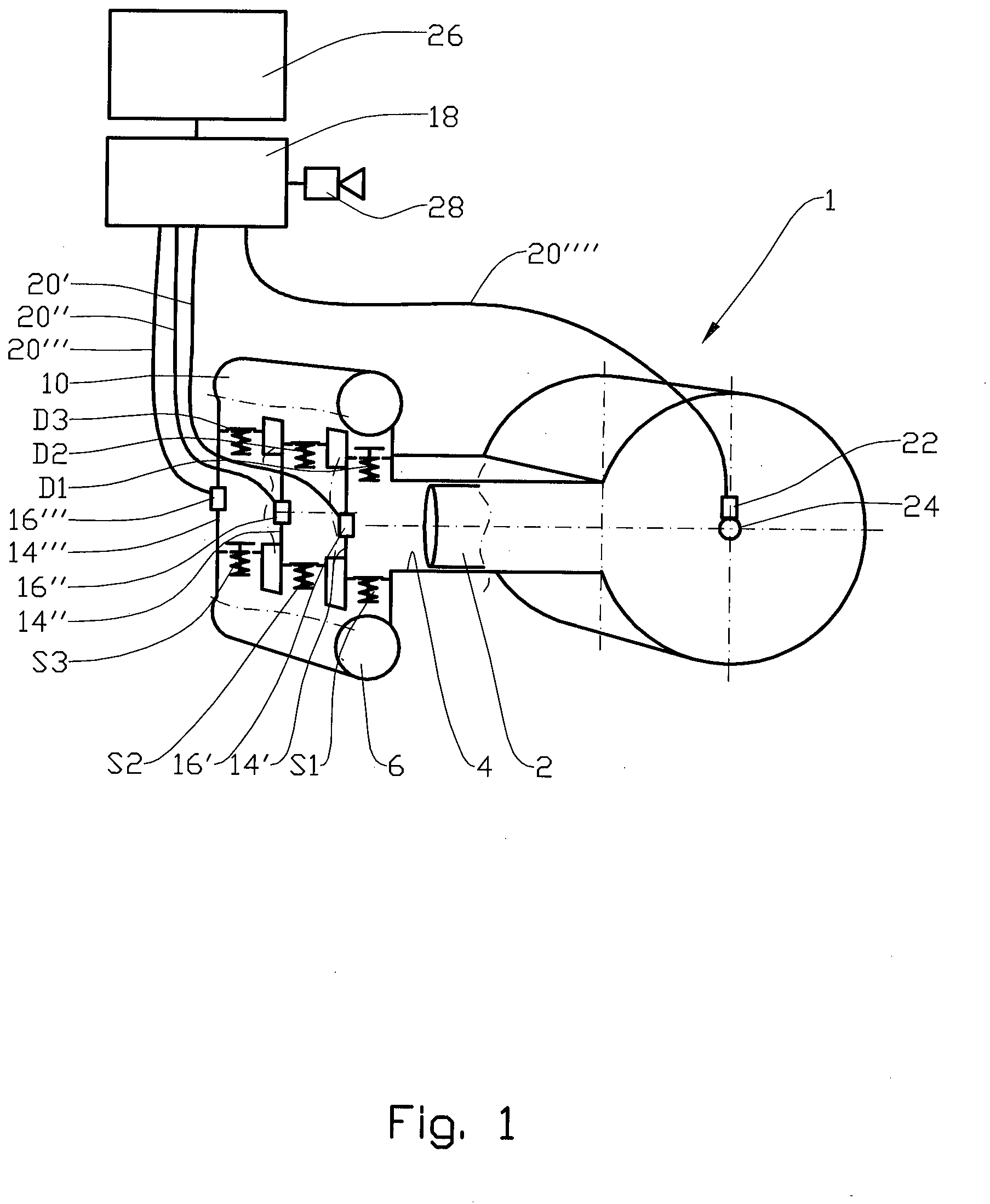 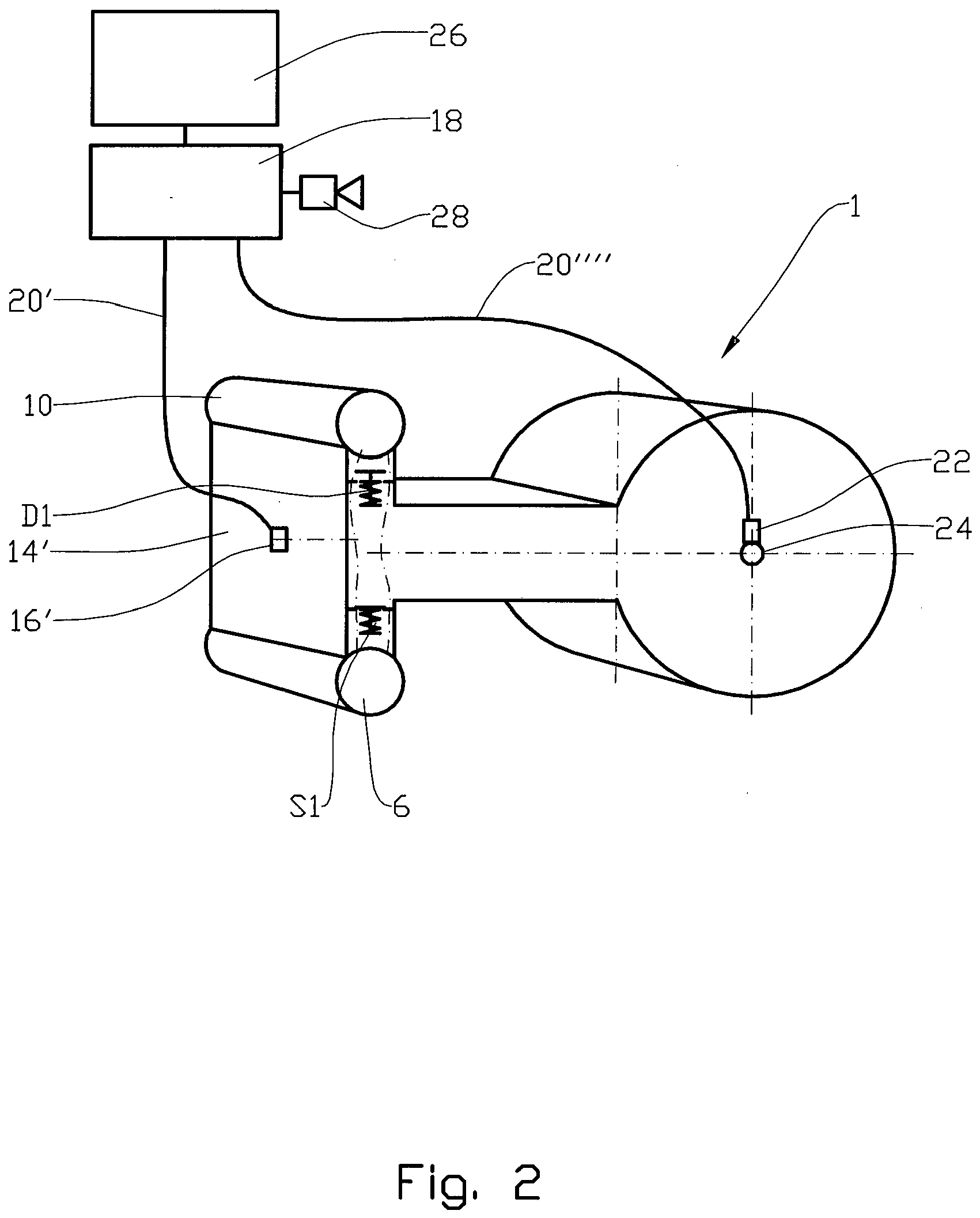 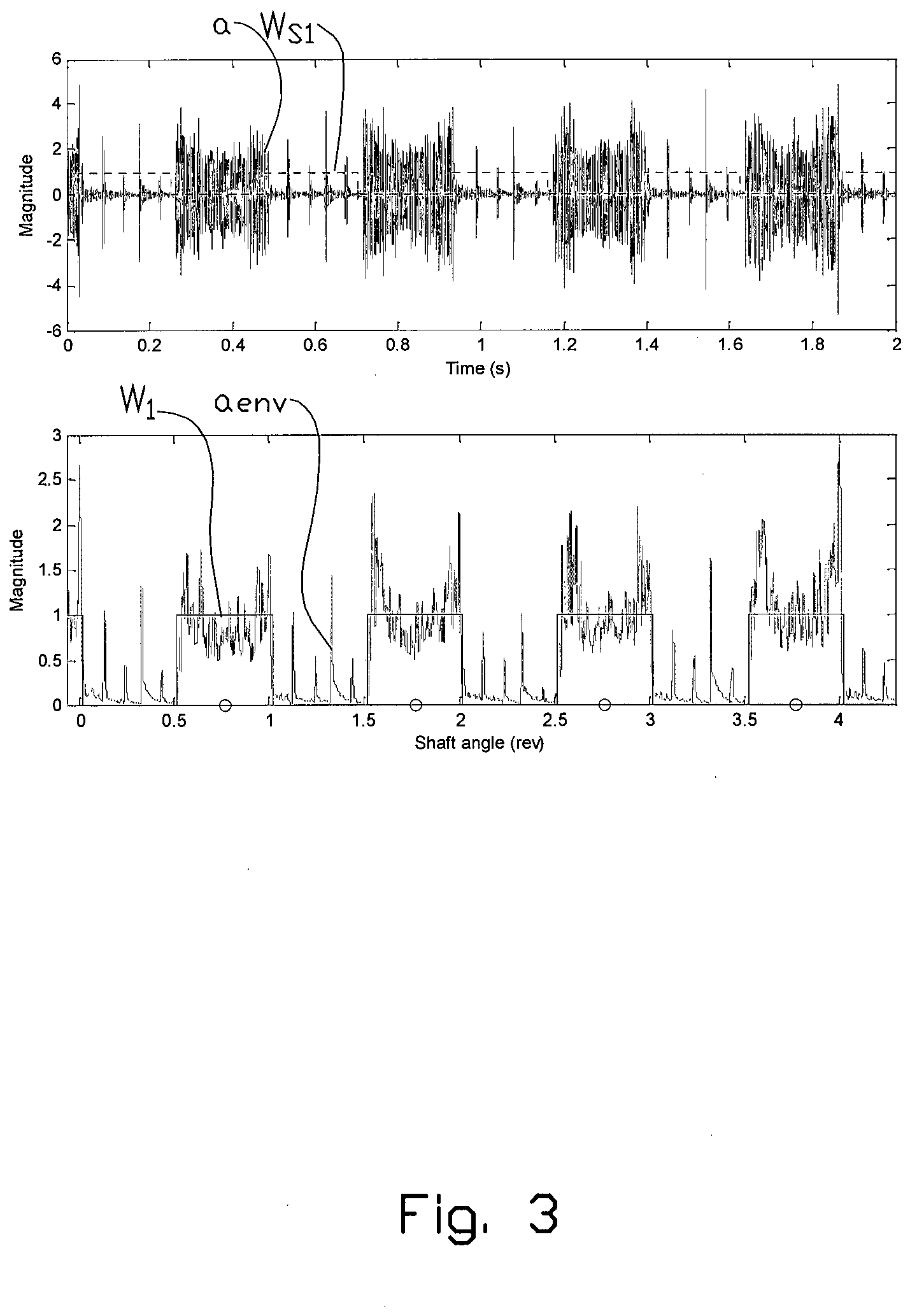