[0019] The invention provides a novel composition in the form of a liquid, physically stable O/W-emulsion comprising (a) a dispersed phase comprising a semifluorinated alkane according to formula RFRH, (b) an aqueous continuous phase, and (c) at least one surfactant, wherein RF is a linear perfluorinated hydrocarbon segment with 4 to 12 carbon atoms, and RH is a linear alkyl group with 4 to 8 carbon atoms, and wherein perfluorinated compounds are absent in the dispersed phase. The composition is further characterised in that the average droplet size of the dispersed phase is below about 1 µm.
[0020] In one of the preferred embodiments, the dispersed phase of the composition comprises a poorly water-soluble active pharmaceutical agent such as propofol. Preferably, the propofol emulsion exhibits a high drug load, i.e. the propofol concentration in the dispersed phase is at least about 10 wt.-%. Preferably, the propofol composition is sterile. Due to the high antimicrobial stability of semifluorinated alkanes, the composition may be free of preservatives. It is also preferably free of triglyceride oils and therefore not associated with the risk of hyperlipidaemia and pancreatitis.
[0021] In a further aspect, the invention provides a liquid O/W-emulsion which is highly concentrated in that its dispersed phase represents at least about 50 wt.-% of the emulsion. Such highly concentrated versions are particularly suitable for being used as preconcentrates which can be diluted with specific aqueous liquids prior to use. Moreover, they are useful for accommodating high amounts of water-insoluble drug substances or other hydrophobic active agents. Such emulsions may also be used for topical (e.g. dermal) administration.
[0022] Further aspects of the invention related to the uses of such O/W-emulsions comprising semifluorinated alkanes. For example, they may be used pharmaceutically, e.g. as therapeutic or diagnostic preparations. As such, they may be administered topically, orally, or parenterally. In particular, emulsions comprising propofol may be used for general anaesthesia and/or sedation, and may be administered by intravenous injection or infusion. Emulsions comprising an active agent useful for the preservation of organ or tissue transplants, such as N-octanoyl dopamine, may be administered to an organ or tissue transplant donor, to an organ or tissue transplant recipient, and/or for the flushing or immersion of an organ or tissue transplant for storage or transport.
[0023] Furthermore, the compositions of the invention may be used as cosmetic preparations or as veterinary medicaments.

Figure 2 shows the results of a test for haemolytic activity in the presence of human serum, as described in more detail in example 14.

Figure 3 shows the sedation effectiveness of a propofol emulsion according to the invention in comparison with a conventional propofol product determined in a rat model, as described in example 15.

Figure 4 shows the propofol plasma profiles in rats after intravenous bolus administration of a propofol emulsion according to the invention in comparison with a conventional propofol product, as described in example 16.

[0063] 10 g of propofol were dissolved in 10 g of F6H8. This mixture was added to a solution of 800 mg S75 (soy bean lecithin, Lipoid AG) in 979.2 g of aqueous dextrose solution (5 wt.-%) in water and stirred for 1 h at 2000 rpm. The emulsion was then prepared by high pressure homogenization process using an Avestin C3 apparatus at a pressure of 1100 bar in continuous process for 1 hour. The pH value was adjusted to pH 7,3-7,5 by adding sodium hydroxide solution. The final emulsion was filled into vials, closed and sealed after blanketing with nitrogen. Subsequently, the vials were sterilised at 121 °C for 10 minutes.
[0064] The average droplet size was 212 nm. Surprisingly, during the first 6 month of storage at 23 °C, the mean droplet size showed no significant increase. From this batch, 20 vials was tested according to Ph. Eur. 6 and found to be sterile.

[0074] In essentially the same manner as in example 1 except that, additionally, 3 mg of the dye Patent Blue V was used, a sterilised blue emulsion was prepared.

[0076] An antimicrobial preservative effectiveness test in analogy to that of USP 32 <51> was carried out. Sample vials prepared according to Examples 1, 3 and 4 were inoculated with Escherichia coli, Pseudomonas aeruginosa, Staphylococcus aureus, Candida albicans and Aspergillus niger and incubated at approx. 22.5 °C. Commercially obtained samples of Disoprivan® were tested as comparators. The results are given in tables 1 to 4.
[0077] Surprisingly, no increase but a substantial decrease in the concentration of colony-forming units (cfu) over 24 and 48 hours was observed in the case of emulsions comprising semifluorinated alkanes. Obviously, the emulsions according to the invention do not support microbial growth, but rather inhibit it in the same manner as if an effective amount of an antimicrobial preservative had been added. In contrast, the Disoprivan® samples showed a marked increase in cfu/mL for Escherichia coli, Staphylococcus aureus und Candida albicans.
Table 1
Table 2
Table 3
Table 4

[0078] To determine whether the observed inhibition of microbial growth in the emulsions of the invention is an effect of the semifluorinated alkanes or the propofol, the test was repeated with a placebo emulsion containing no propofol, but only F6H8 in a higher concentration (40 wt.-%) and S75 in dextrose solution. Also tested were pure solutions of F6H8 and F4H5. The results are given in table 5 to 7 and indicate that this propofol-free emulsion is also capable of reducing the concentration of Escherichia coli, Pseudomonas aeruginosa and Staphylococcus aureus. In case of Aspergillus niger, an initial decrease in cfu concentration was obtained, but after 48 hours it was back to the starting level. Only Candida albicans concentrations increased substantially, probably due to the presence of lecithin.
Table 5
Table 6
Table 7

[0079] Emulsions were prepared essentially as in example 2 end tested for their haemolytic effects on human erythrocytes in the presence and absence of human serum. The continuous phase of the emulsions consisted of aqueous glucose solution (5 wt.-%). The other constituents of the emulsions are given in table 8. In short, aliquots of a suspension of human erythrocytes in phosphate-buffered saline solution were mixed with aliquots of the test samples and the comparator in microtitre plates and further diluted stepwise to obtain a dilution series down to a dilution factor of 256. As a positive control, an analogue dilution series of the erythrocyte suspension with buffer was prepared wherein the erythrocytes where subsequently lysed completely using a surfactant solution. For each dilution, the degree of haemolysis was quantified by measuring the optical density of haemoglobin by spectrophotometry.
[0080] In result, it was found that, in the absence of serum, only the emulsion prepared from propofol without semifluorinated alkanes (ST174) caused significant, concentration-dependent haemolysis. All other emulsion compositions showed no or only negligible haemolysis, regardless of the concentration (see figure 1).
[0081] In the presence of serum, the propofol emulsion without semifluorinated alkanes (ST174) again caused significant, concentration-dependent haemolysis, whereas both tested emulsions comprising semifluorinated alkanes (ST245, ST311) showed no haemolysis. Disoprivan® was also tested this time and showed some moderate degree of haemolysis (see figure 2).
Table 8

[0082] These results demonstrate that propofol emulsions based on semifluorinated alkanes as provided according to the invention show excellent blood compatibility which should correspond to a superior tolerability profile. This is in spite of the fact that propofol itself shows poor compatibility with erythrocytes and leads to significant haemolysis. Apparently, the content of semifluorinated alkanes in the compositions of the invention provides protection against haemolysis.

[0083] The sedation effectiveness of a propofol emulsion with F6H8 having a strength of 1 wt.-% (batch code ST245, see table 8) was compared to that of Disoprivan® in a rat sedation model. In short, the following parameters were observed and recorded along with the time of occurrence after i.v. injection of a dose corresponding to 10 mg propofol per kg body weight of each formulation: Loss of righting reflex (ta), loss of reaction to toe pinch (i.e. pain) stimulus (tb), start of excitation phase (tex), regain of righting reflex (trr).
[0084] In result, the same effects occurred at similar times after injection, and some minor differences between Disoprivan® and the test emulsion with respect to the start of the excitation phase and the regain of the righting reflex were not statistically significant (see figure 3).

[0085] The pharmacokinetics after intravenous injection of a propofol emulsion comprising F6H8 having a propofol strength of 1 wt.-% (batch code ST129, see table 8) in Wistar rats was compared to that of Disoprivan®. As shown in figure 4, the plasma concentration profiles were rather similar for both formulations, with some minor differences with respect to the maximum plasma concentrations, indicating that the test emulsion could be used in a similar manner as Disoprivan®, without requiring dose adaptations.

1. A liquid composition in the form of a physically stable O/W-emulsion comprising:

(a) a dispersed phase comprising a semifluorinated alkane according to formula


(b) an aqueous continuous phase, and

(c) at least one surfactant;

RF is a linear perfluorinated hydrocarbon segment with 4 to 12 carbon atoms,

3. The composition of any preceding claim, further characterised in that it is sterile and/or heat sterilisable.

4. The composition of any preceding claim, comprising a nonionic surfactant, further characterised in that the aqueous continuous phase comprises a salt or ionic compound.

5. The composition of claims 1 to 3, comprising an ionic surfactant, further characterised in that the aqueous continuous phase comprises a physiologically acceptable, nonionic osmotic agent.

6. The composition of any preceding claim, wherein the continuous aqueous phase comprises a compound selected from buffers and amino acids.

7. The composition of any preceding claim, wherein the dispersed phase comprises an active pharmaceutical ingredient.

8. The composition of claim 7, wherein the active pharmaceutical ingredient is propofol.

9. The composition of claim 8, wherein the concentration of propofol in the dispersed phase is at least about 10 wt.-%.

10. The composition of claim 8 or 9 for use in the induction and/or maintenance of anaesthesia, or for sedation, wherein the use comprises the parenteral administration of the composition to a patient in need thereof.

11. The composition of any preceding claim, wherein the dispersed phase represents at least about 50 wt.-% of the emulsion.

13. The composition for use as a medicine according to claim 12, wherein the composition is adapted for dermal, mucosal, buccal or sublingual administration.

14. The use of a composition of claims 1 to 8 as a medium for the preservation and/or storage and/or transport of an organ transplant. 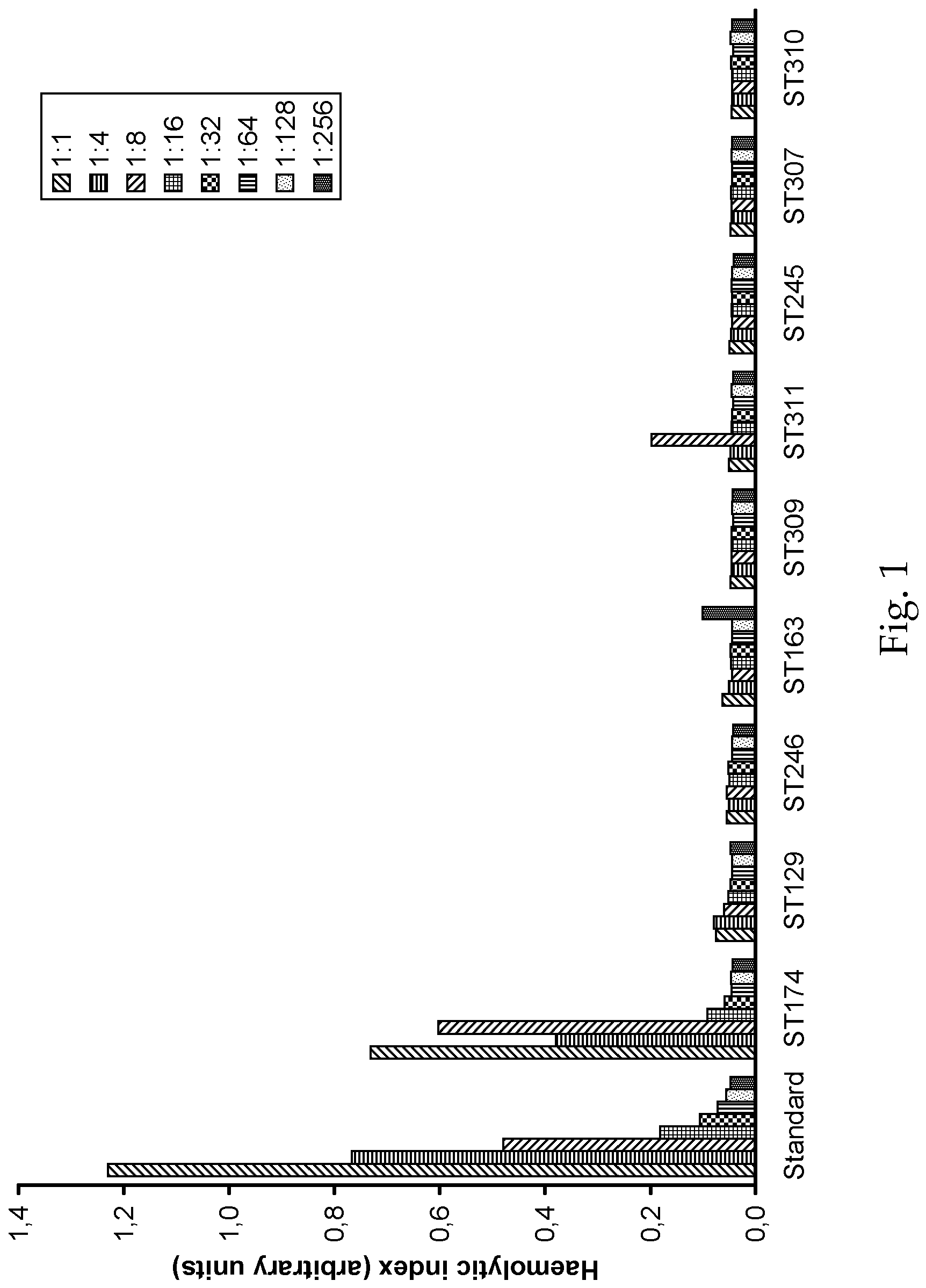 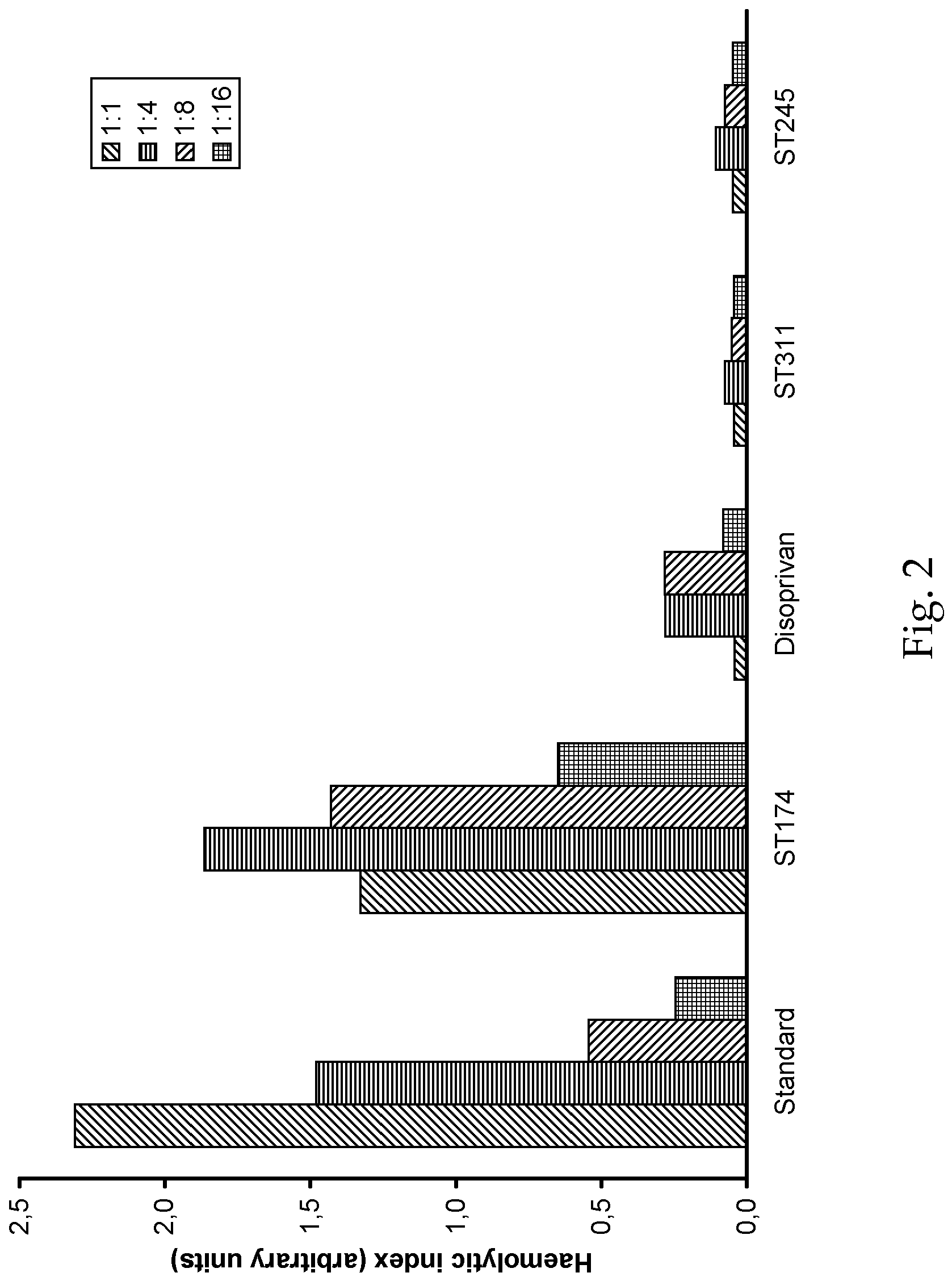 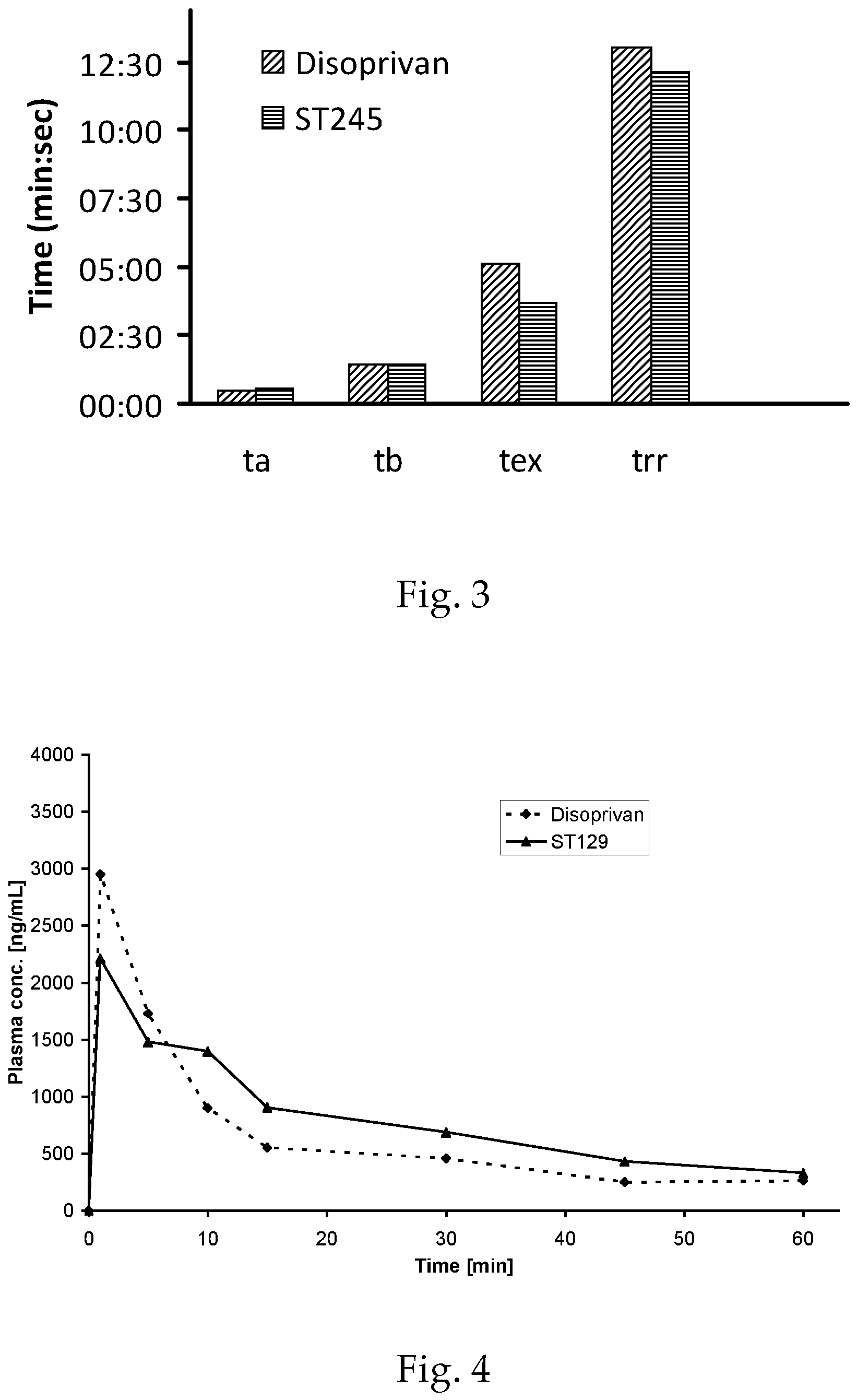