[0001] This description generally relates to rotating-cathode magnetron sputtering. In particular, it deals with certain problems encountered when the target material is increased beyond the point where standard magnetron assemblies can supply adequate magnetic flux suitable for magnetron sputtering. Additionally, some embodiments of the present invention improve process conditions for the deposition of such materials as transparent conductive oxides (TCO).

[0002] Magnetron sputtering of rotating targets is well known in the art and is used extensively for producing a wide variety of thin films on a wide variety of substrates. A reasonable overview of sputtering with rotating cathodes can be found in US Patent No. 5,096,562, as one example. US patent 6375814B1 describes a magnetron assembly in which the magnet assembly produces an elongate plasma racetrack with elliptical end portions, and in which the transverse spacing between the elongate magnets is increased locally. Prior art document WO-A1-96/21750 discloses a magnetic assembly for a cylindrical magnetron, which is designed such that the racetrack has an end section shaped in a parabola, semi-ellipse, or triangle so as to reduce the erosion of the cylindrical target at the end portions.
[0003] In the most basic form of rotating-target magnetron sputtering, the material to be sputtered is either formed in the shape of a tube or is adhered to the outer surface of a support tube made of rigid material. A magnetron assembly is disposed within the tube and supplies magnetic flux which permeates the target such that there is adequate magnetic flux at the outer surface of the target. The magnetic field is designed in a way such that it retains electrons emitted from the target so as to increase the probability that they will have ionizing collisions with the working gas, hence enhancing the efficiency of the sputtering process.
[0004] Fabrication cost for targets of some materials, in particular ceramic TCO materials, are relatively high in comparison to the cost of the raw materials. To improve the economy of these targets, it is desirable to increase the thickness of the target material. In this way, the target will have significantly more usable material while adding only minimally to the overall cost of the target. This is because the fabrication cost does not change significantly.
[0005] The only significant increase is due to the additional raw material used. Thicker targets should have the added benefit of allowing longer production campaigns between target changes.
[0006] As mentioned, increasing the target thickness too much can result in inadequate magnetic flux at the target surface when using standard magnetron assemblies. The need for a magnetron design with higher magnetic flux is clear.
[0007] However, the effort to increase magnetic flux will usually create a new problem wherein the width of the turn-around is broadened. This, in turn, results in an increased relative erosion rate at the target ends and, therefore, a shortened target life due to target "burn-through". This is contrary to the purpose of increasing the target thickness.

[0008] The typical magnetron assembly 100 (shown in FIG. 1A) for rotating cathodes comprises three substantially parallel rows 102 of magnets attached to a yoke 104 of magnetically conductive material, such as steel, that helps complete the magnetic circuit. The direction of magnetization of the magnets will be radial with respect to the major axis of the sputtering target. The center row 106 will have the opposite polarity of the two outer rows 108. (see FIG. IB) Additional description of this type of magnetron can be found in US Patent No. 5,047,131. Magnetic flux of the inner and outer rows 106 and 108 of magnets is linked through the magnetically conductive yoke 104, on one side of the magnets. On the other side of the magnets, opposite the yoke 104, the magnetic flux is not contained in a magnetically conductive material; hence, it permeates substantially unimpeded through the target which is substantially non-magnetic. Thus, two arc-shaped magnetic fields are provided at and above the working surface of the target. This field retains the electrons and causes them to drift in a direction perpendicular to the magnetic field lines, which is parallel to the rows 102 of magnets. This is known as the ExB drift and is described in any basic plasma physics text book. In an ordinary arrangement, this drift path is also parallel to the major axis of the target.
[0009] Additionally, the outer rows 108 are slightly longer that the inner row 106 and additional magnets 110 (shown in FIG. IB), of the same polarity as the outer rows 108, are placed at the ends of the assembly between the two outer rows 108 creating the so-called "turn-around" areas of the drift path. This has the effect of connecting the two drift paths, hence forming one continuous ovular "racetrack" drift path. This optimizes the retention of the electrons and therefore optimizes the efficiency of the sputtering process.
[0010] The intuitive route to increasing the field strength is simply to increase the size or the strength of the magnets. Increasing the magnetic strength is limited by availability of stronger magnets. Very high strength magnets are also very expensive, and difficult to work with. Furthermore, stronger magnets could also be applied to any superior design for added benefit such as those of the embodiments of the present invention.
[0011] Problems arise when considering magnets of larger cross-section. Increasing the dimension in the radial direction doesn't give a proportional increase in flux at the target surface. As such, this is a self-limiting approach. Increasing the dimension in the direction tangent to the target surface is also self-limiting in that the geometry requires moving the bulk of the magnetic material further from the target surface, which serves to weaken the field at the target surface. This is contrary to achieving the desired effect, (see FIG. 2 for one example of such a design)
[0012] Another detrimental effect to the approach of increasing the magnet size is that the racetrack is widened. That is to say, the two long portions of the racetrack are separated further from each other. This broadens the turn-around portions of the racetrack leading to an increased relative erosion rate at the ends of the targets. Consequently, these portions of the target are spent before using the greater bulk of the target material. Hence, the target must be taken out of service before fully using the target material.
[0013] To understand the increased erosion rate at the ends, one can consider two points on the rotating target surface. One point rotates through the two legs (long portions) of the racetrack. The other point rotates through the turn-around. It will be seen that the point going through the turn-around spends much more time in the racetrack, hence is more heavily eroded. Further discussion of this topic can be found in US Patent No. 5,364,518.
[0014] In one aspect, the present invention provides a magnetron assembly as defined in claim 1. Other aspects of the invention provide a sputtering system as defined in claim 11, and the use of such a system as defined in claim 13. The problems described above can be overcome by using four (or more) rows or other independent linear arrays of magnets, instead of the usual 3 rows. This allows the problem of oversized magnets as previously discussed to be overcome. More importantly, though, it allows for a unique modification to the turn-around that minimizes the excessive erosion at the ends of the target without negatively impacting (or at least reducing the negative impact) to the retention of electrons.

FIG. 1A is a diagram of a typical magnetron assembly for rotating cathodes.

FIG. IB illustrates the direction of magnetization of the magnets in the magnetron assembly of FIG. 2A.

FIG. 2 is a diagram of an alternative design of a magnetron assembly for rotating cathodes.

FIG. 3A is a diagram of one exemplary embodiment of a magnetron assembly.

FIG. 3B is a diagram of one exemplary embodiment of a yoke used in the magnetron assembly of FIG. 3A.

FIG. 4 illustrates one exemplary magnet arrangement suitable for use in the magnetron assembly of FIG. 3A.

FIG. 5 illustrates another exemplary magnet arrangement suitable for use in the magnetron assembly of FIG. 3A.

FIG. 6 illustrates yet another exemplary magnet arrangement 600 suitable for use in the magnetron assembly of FIG. 3A.

FIG. 7 is a diagram of another exemplary embodiment of a magnetron assembly.

FIG. 8 is a diagram of one exemplary embodiment of a sputtering system in which the magnetron assemblies of FIG. 3A and FIG. 7 can be used.

wherein the outer and the inner rows (506) of the plurality of magnets (502) are laterally offset from each other so as to form a step at each end of the pattern of magnets.

a chamber (10) arranged such that, in use, a substrate (12) moves through said chamber;

an elongated rotatable cylindrical tube (16) mounted in the chamber (10) and having a target surface (20); and

the magnetron assembly of claim 1 positioned within the elongated rotatable cylindrical tube (16). 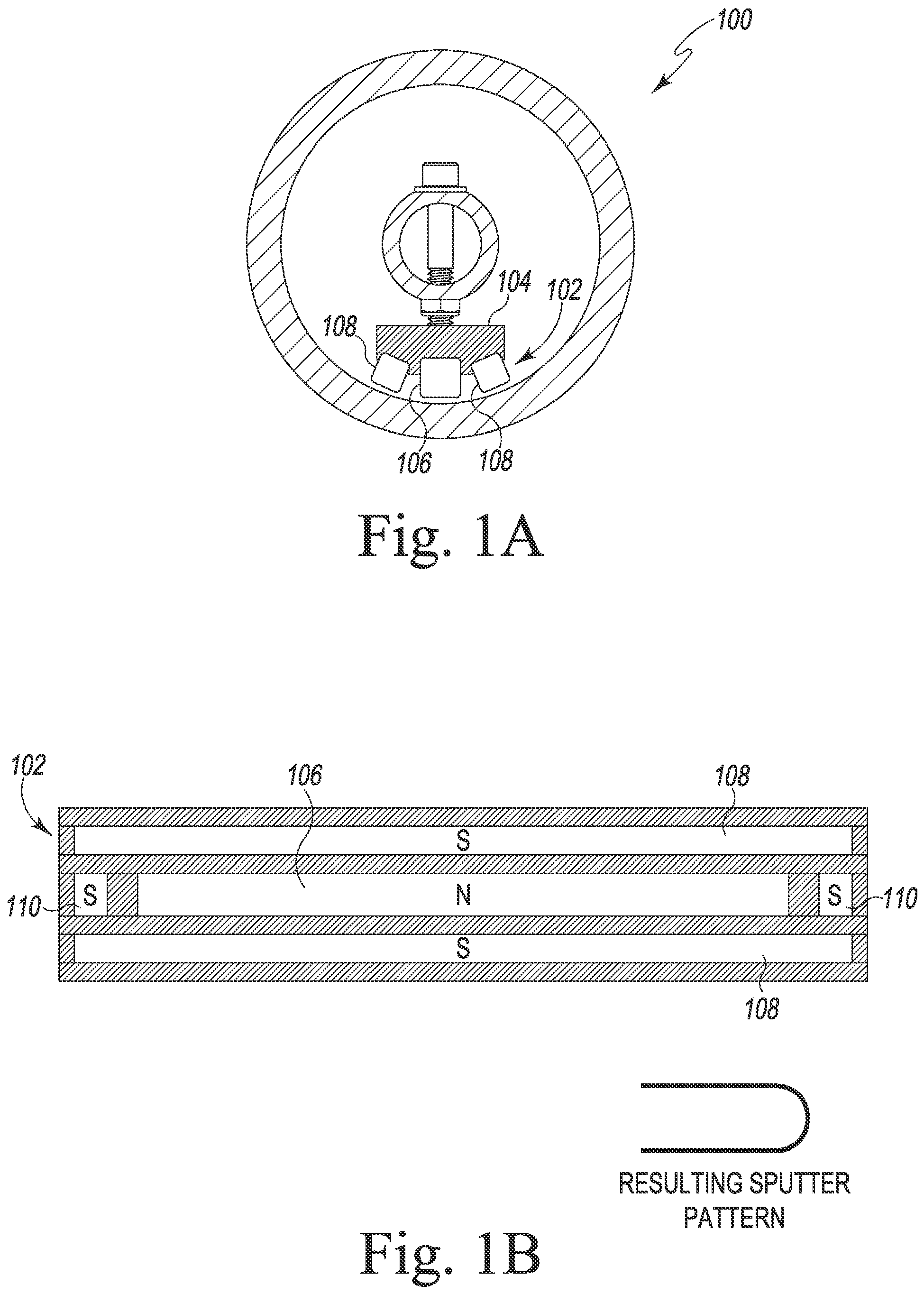 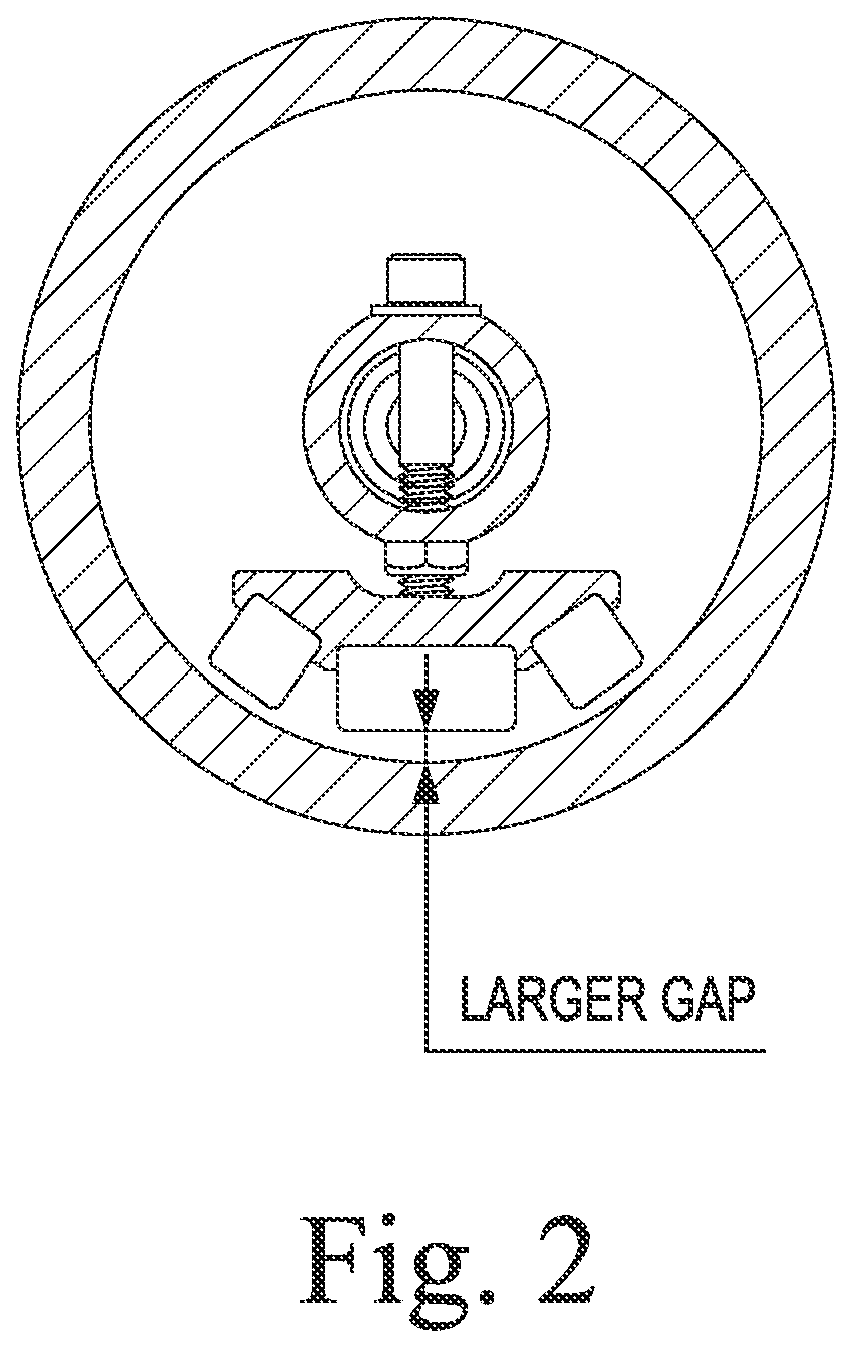 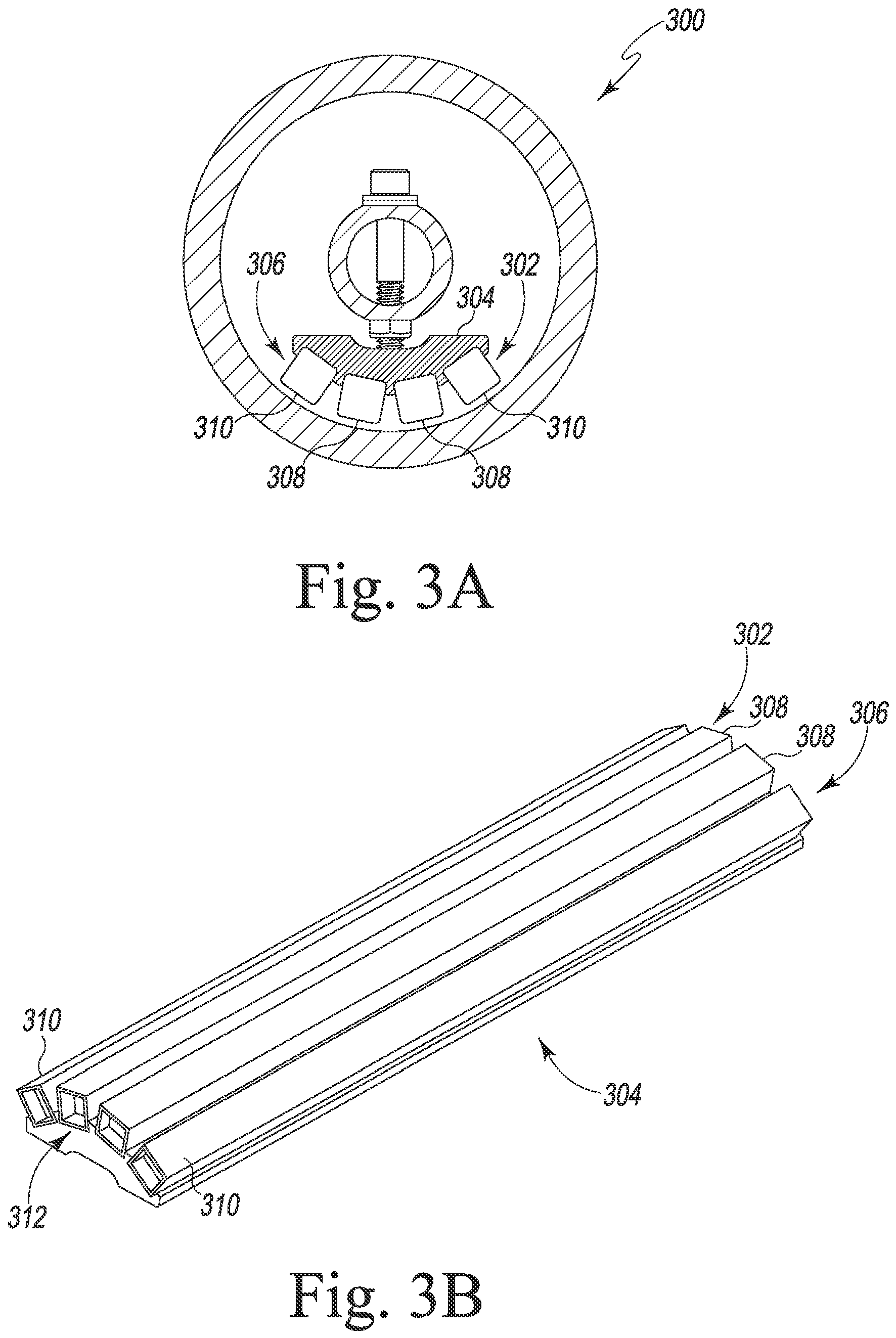 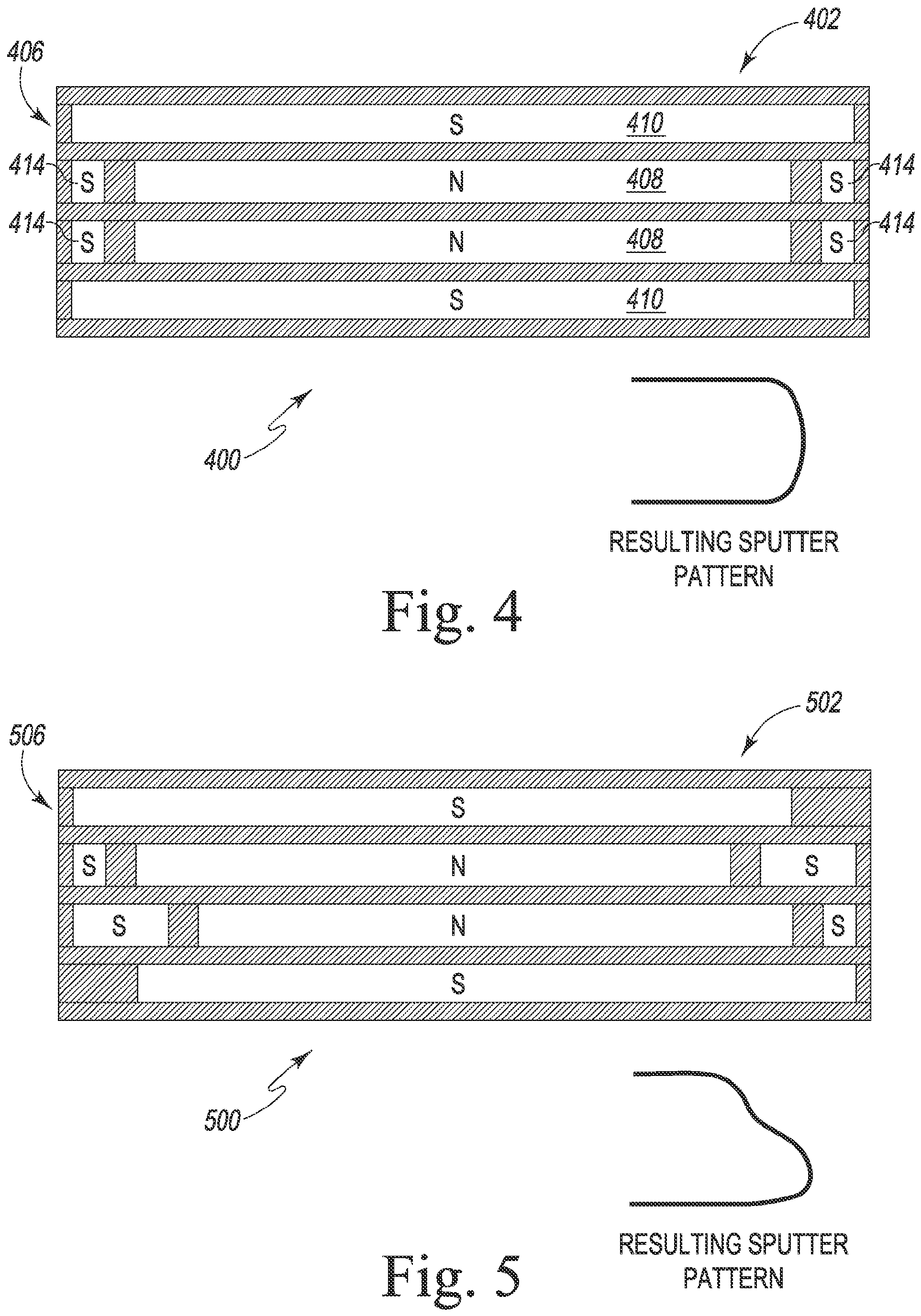 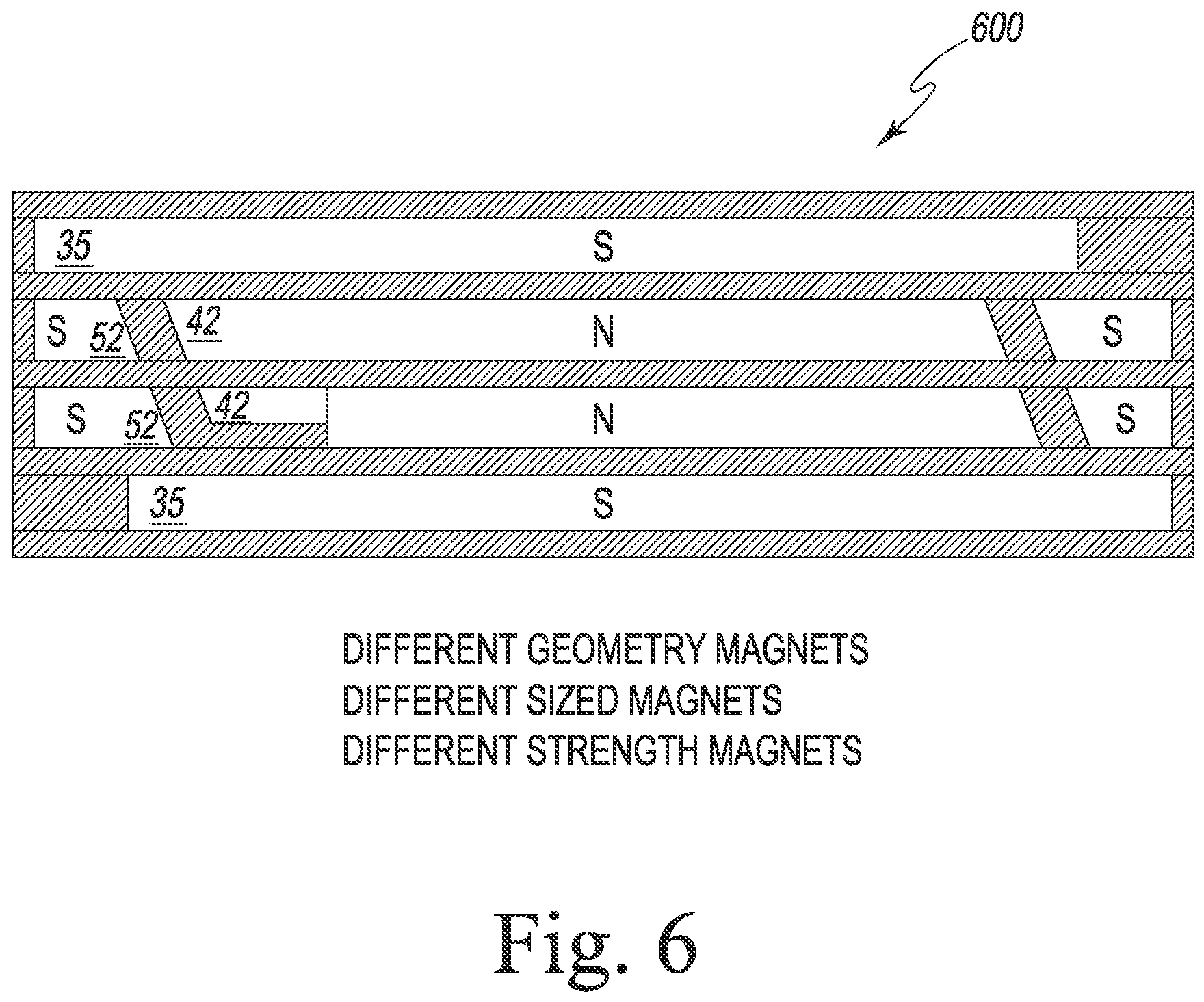 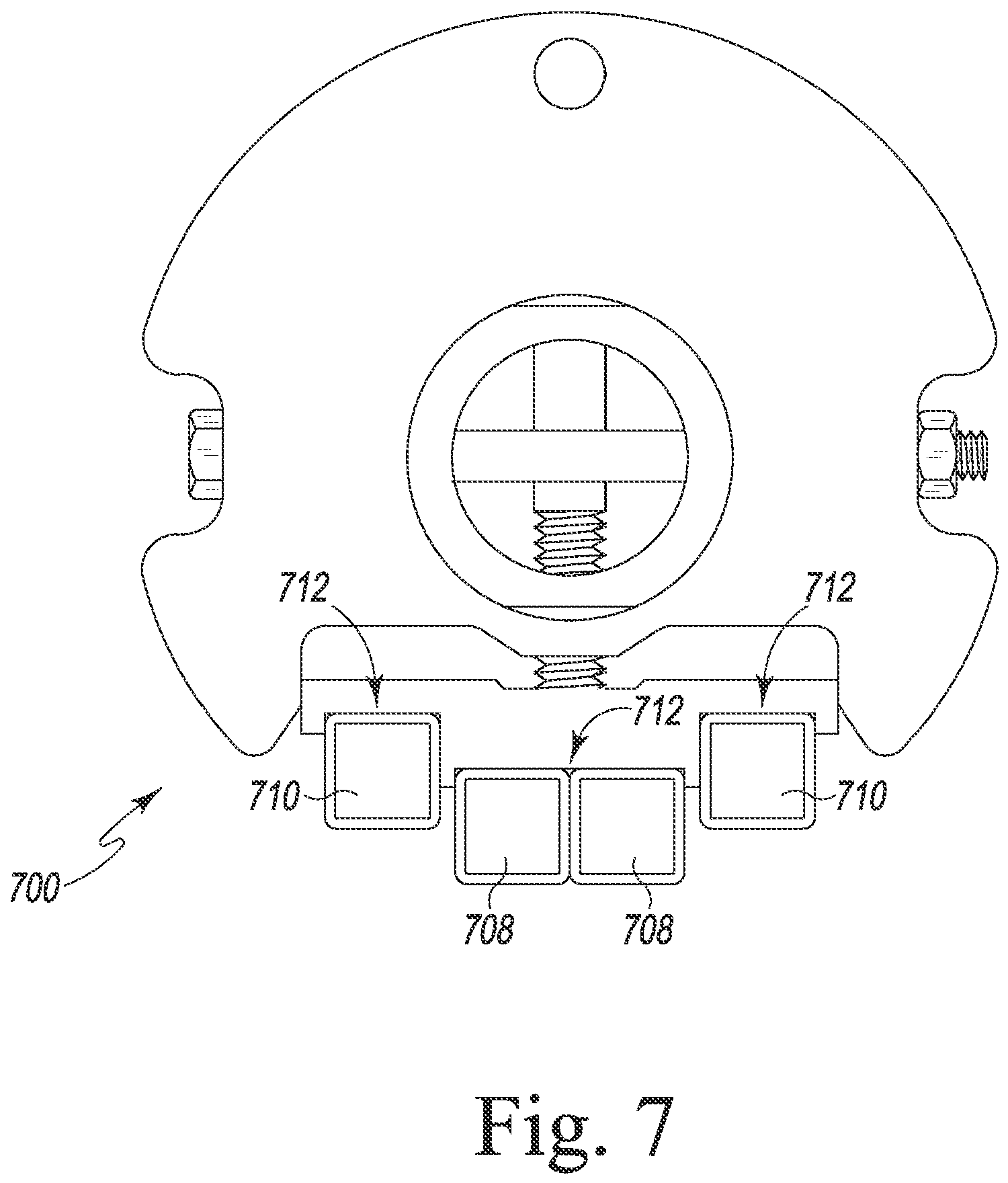 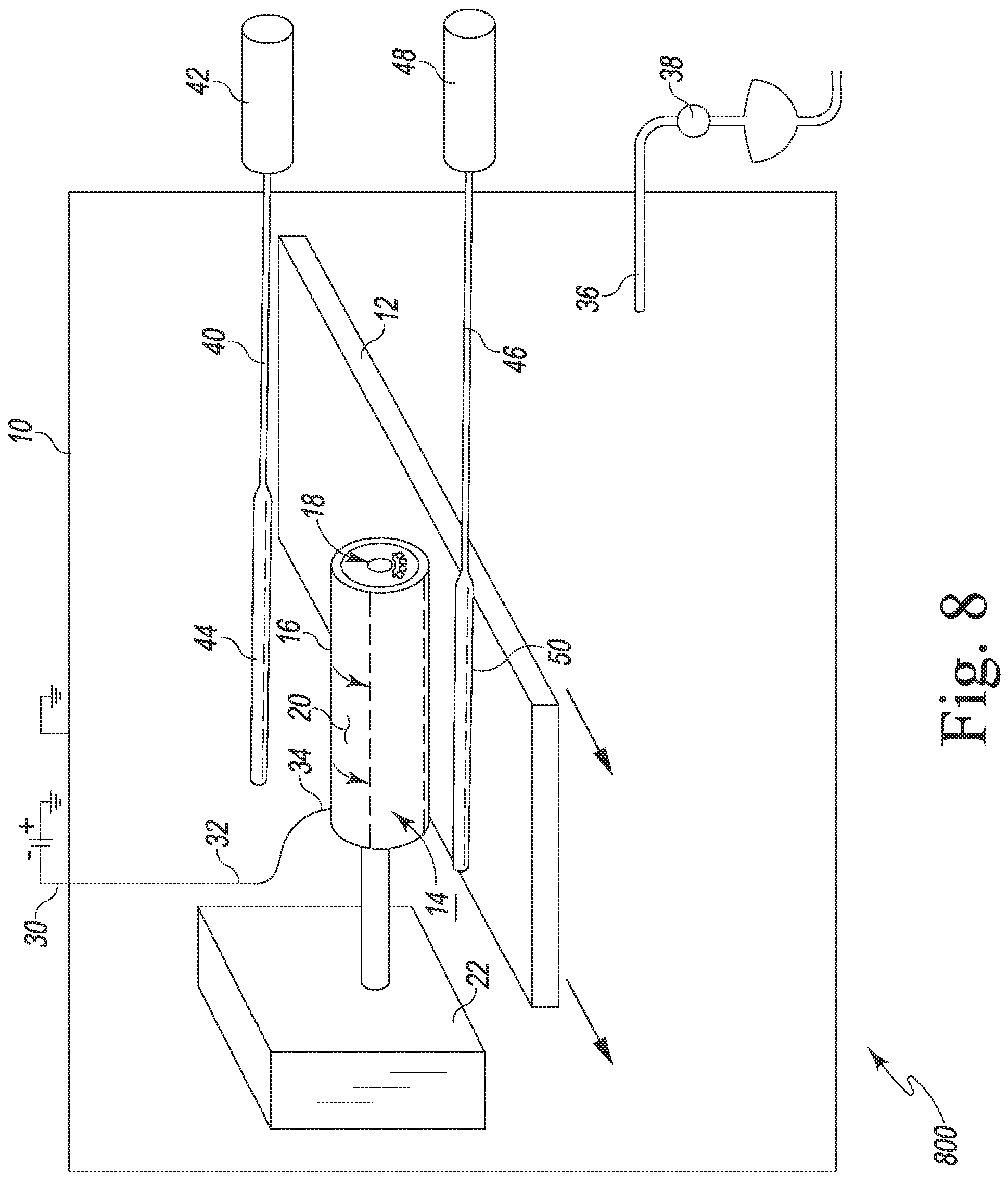