[0002] Increasingly in vehicular and industrial applications, high energy electrical energy storage systems are used. Whether deployed to energize traction/propulsion motors, or factory machines, these energy storage systems often include many interconnected battery module assemblies, each module assembly including many individual battery storage cells. The interconnected modules collectively represent a unitary battery pack for the energy storage needs of the application.
[0003] Each module includes on-board electronics for safety and monitoring uses, and it is important that a centralized monitoring system reliably exchange data with these modules. The voltages and currents that exist in operation and control of the motors or machines produce conditions (e.g., voltage and current variations) that can interfere with the communications in a number of ways. The communication system must therefore be designed to operate satisfactorily in the presence of significant potential electromagnetic interference (both electromagnetic induction and electromagnetic radiation).
[0004] In the EV context, further boundary conditions include: a) low-cost solutions, b) reduced part/component solutions, c) low power consumption, and d) reliability appropriate for an automotive environment. The communications to and from the energy storage system includes safety-critical data and the automotive environment is harsh. The vehicle moves and is subject to mechanical bumps, shocks, and vibrations, under a range of temperature and humidity conditions. The modules are discrete elements and communications systems require wiring harnesses using wires and connectors. The wires and wire connectors/connections can break and/or they can become loose or provide intermittent connections, among other challenges.
[0005] What is needed is a system and method for low-cost, fault tolerant, EMI robust data communications, particularly for an EV environment.
[0006] EP 0383946 A1 describes a serial control apparatus in which a plurality of nodes and a main controller for controlling the nodes are connected in series using two signal lines in order to detect missing frame signals on the two signal lines. Breaking of one of the signal lines is detected whenever a frame signal is not received through said signal line for a time longer than a predetermined period of time. Similar prior art as disclosed in US 4,159,470 and JP S56 20356 A.
[0007] US 2012/0013201 A1 discloses a battery management and data communication system in which a plurality of batteries are connected to a battery management system in a ring structure, via a power bus, a fault bus, a reset bus, and a communication bus. The fault bus is distinct from the communication bus. A heartbeat signal is sent from the battery management system to the battery module and from the battery module to further battery modules and back to the battery management system via the fault bus.

[0011] The accompanying figures, in which like reference numerals refer to identical or functionally-similar elements throughout the separate views and which are incorporated in and form a part of the specification, further illustrate the present invention.

FIG. 2 illustrates a connections schematic for the battery electronics system;

FIG. 3 illustrates a general schematic of components of a client;

FIG. 4 illustrates a flowchart of a client response process 400 to received serial data;

FIG. 6 illustrates a packet 6 having 4 bytes used in the battery communications system during enumeration;

FIG. 7 illustrates a sequence of address enumeration transmissions initiated by the host 105;

FIG. 8 illustrates a detailed general schematic of a signal transmission portion of a fault signaling subsystem for battery communications system;

FIG. 9 illustrates a detailed general schematic of a redundancy portion of a fault signaling subsystem for battery communications system;

FIG. 10 illustrates a detailed general schematic of an interference rejection portion of a fault signaling subsystem for a battery communications system;

FIG. 11 illustrates an alternate configuration for the host from that shown in FIG. 10 which adds a filter at each end of the daisy-chain loop;

FIG. 12 illustrates a detailed schematic diagram of an oscillation damping portion of the power distribution implementation for client;

FIG. 13 illustrates a detail schematic diagram of a wake portion of the client;

FIG. 14 illustrates a general schematic diagram of a portion of a differential data signal implementation of battery electronics system;

FIG. 18 illustrates a detailed general schematic of an interference rejection portion of a signaling subsystem for a battery communications system similar to FIG. 10 with additional optional details;

FIG. 19 illustrates an alternate configuration for the host from that shown in FIG. 11 which adds a second host isolated power supply; and

FIG. 20 illustrates an alternate configuration for the host from that shown in FIG. 19.

1. A data communications system, comprising:
a plurality of battery modules including:

causing a test current (Itest) to flow in said a pair of single data conductors; and

activating switching device (1505) when a voltage difference between said first data conductor (205) and said second data conductor (210) exceeds a set threshold due to an interruption of said test current (Itest). 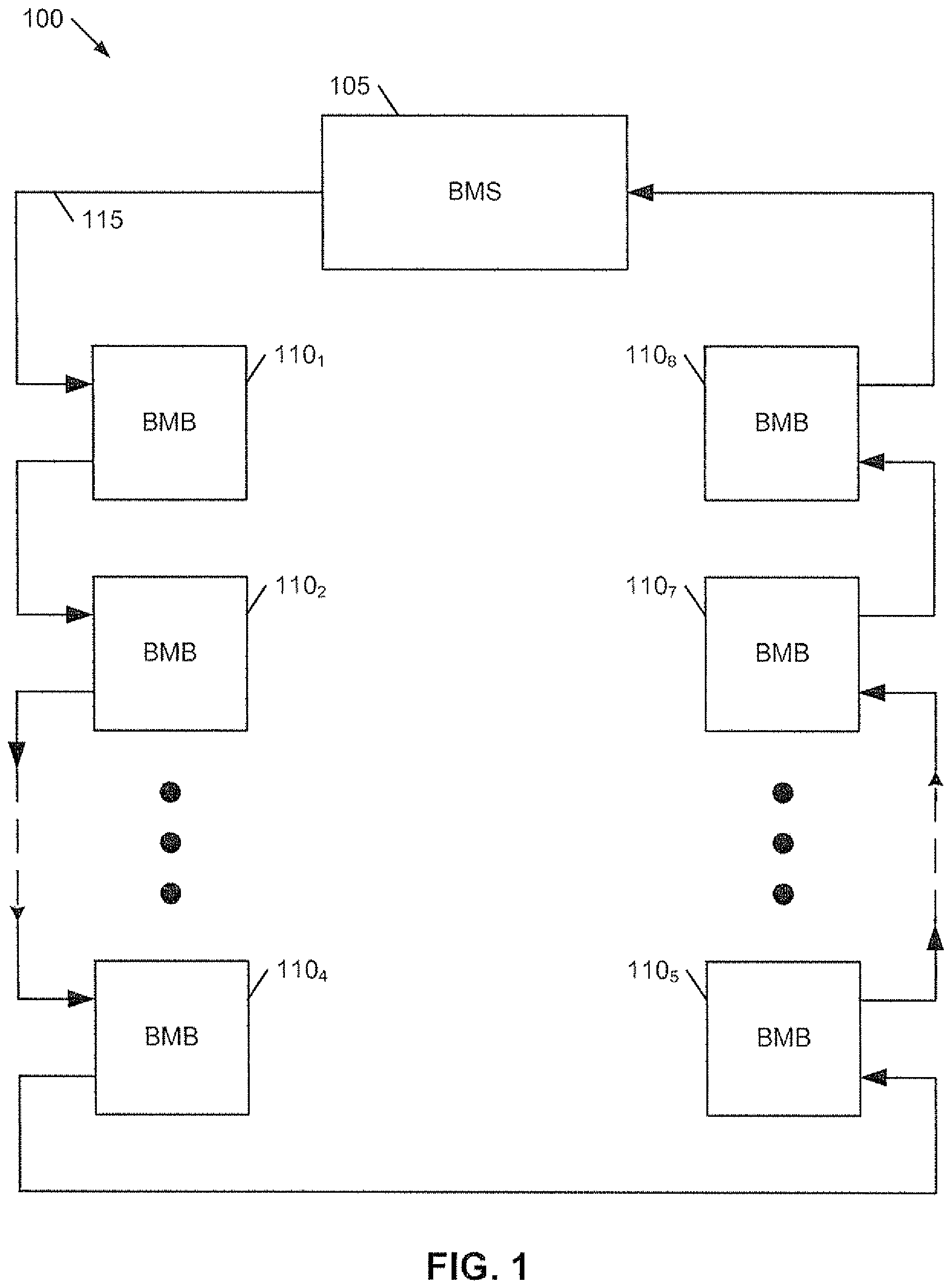 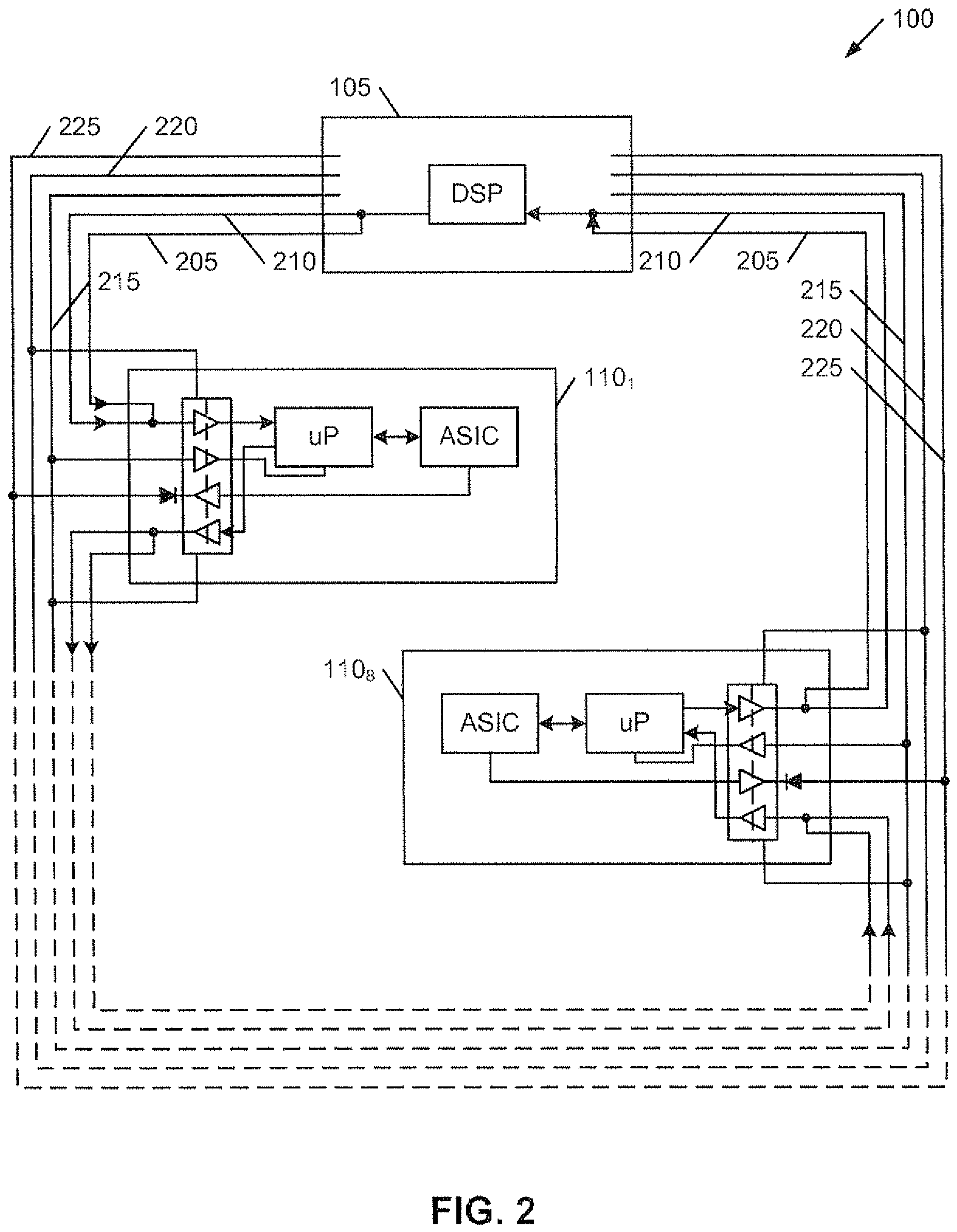 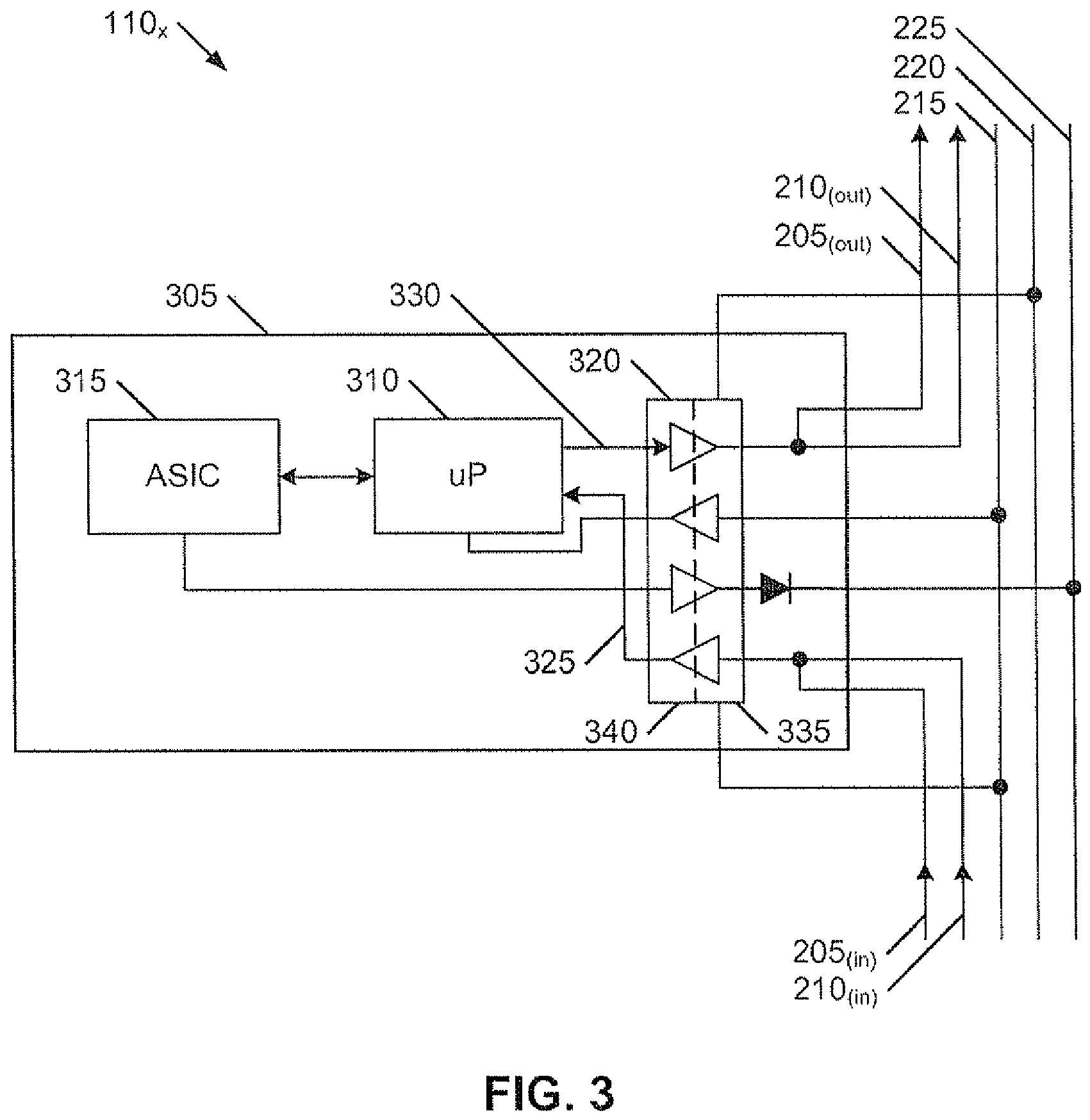 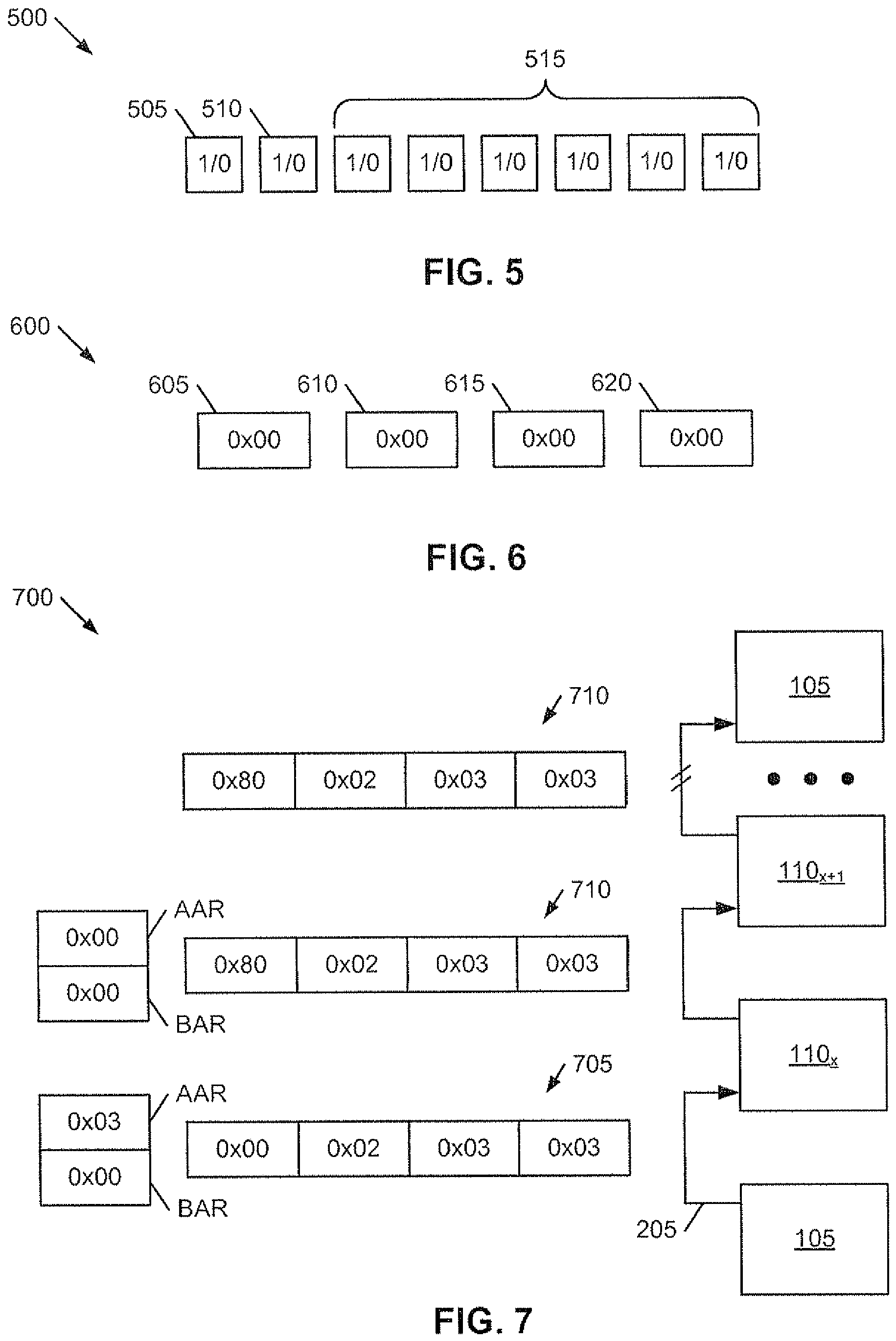 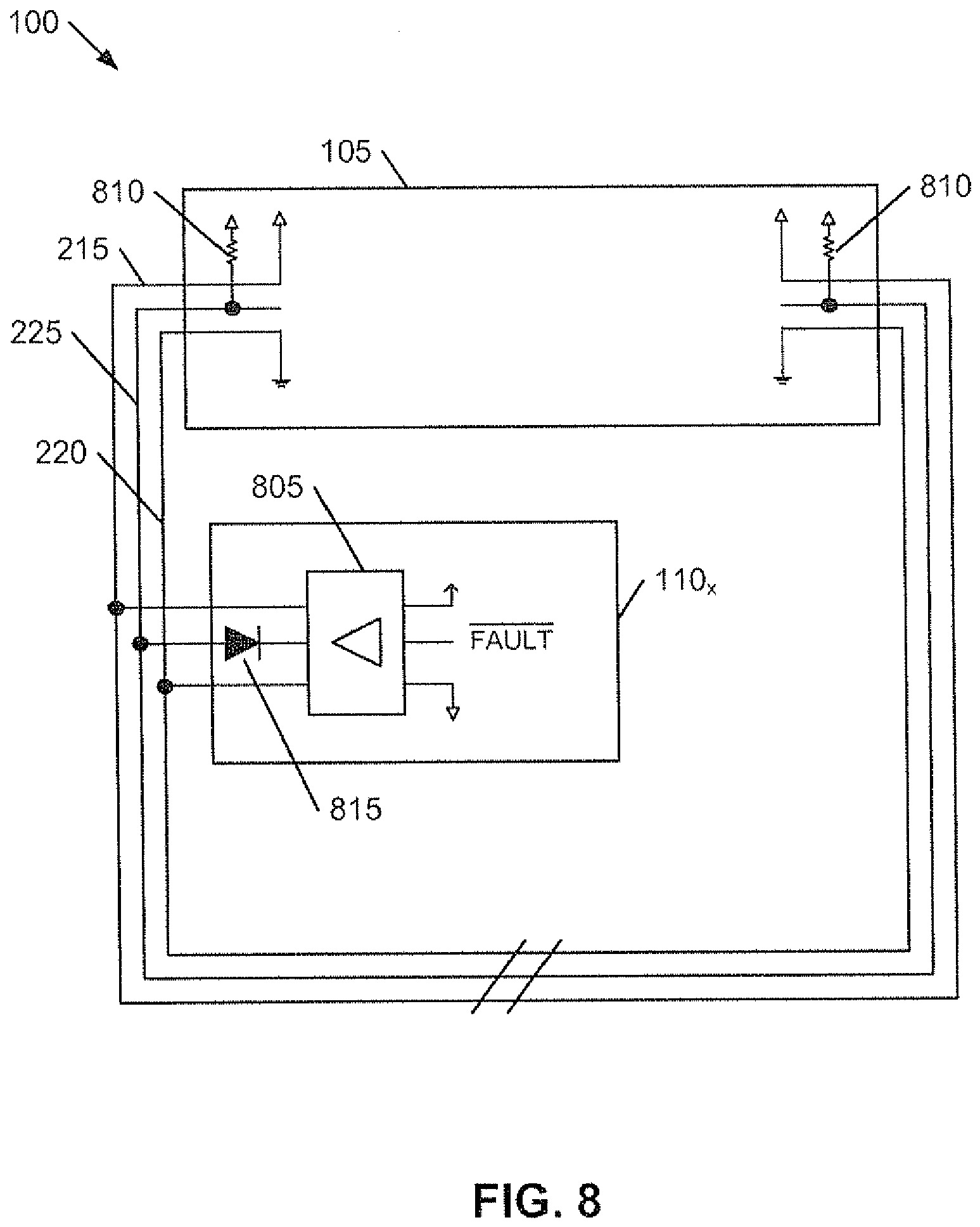 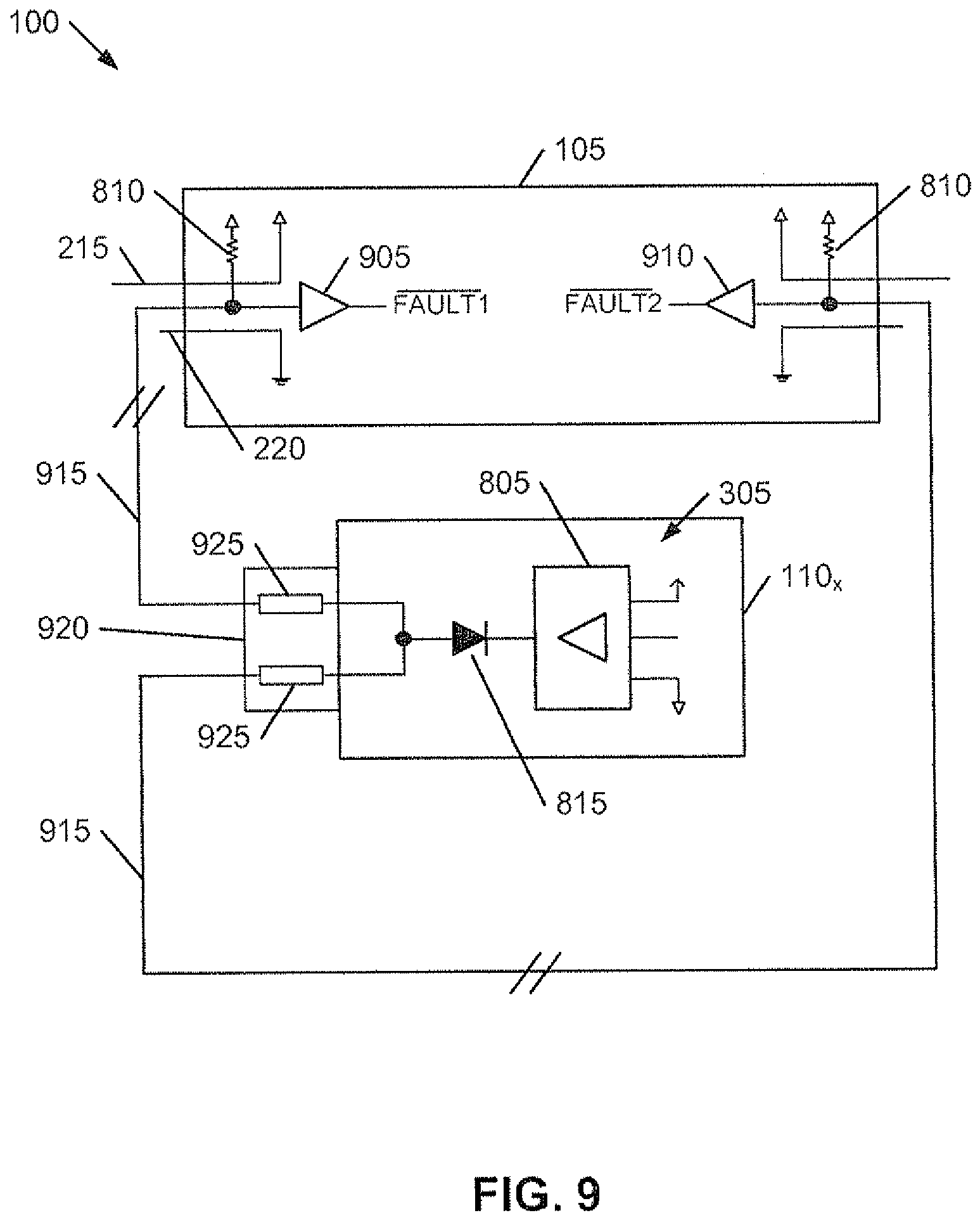 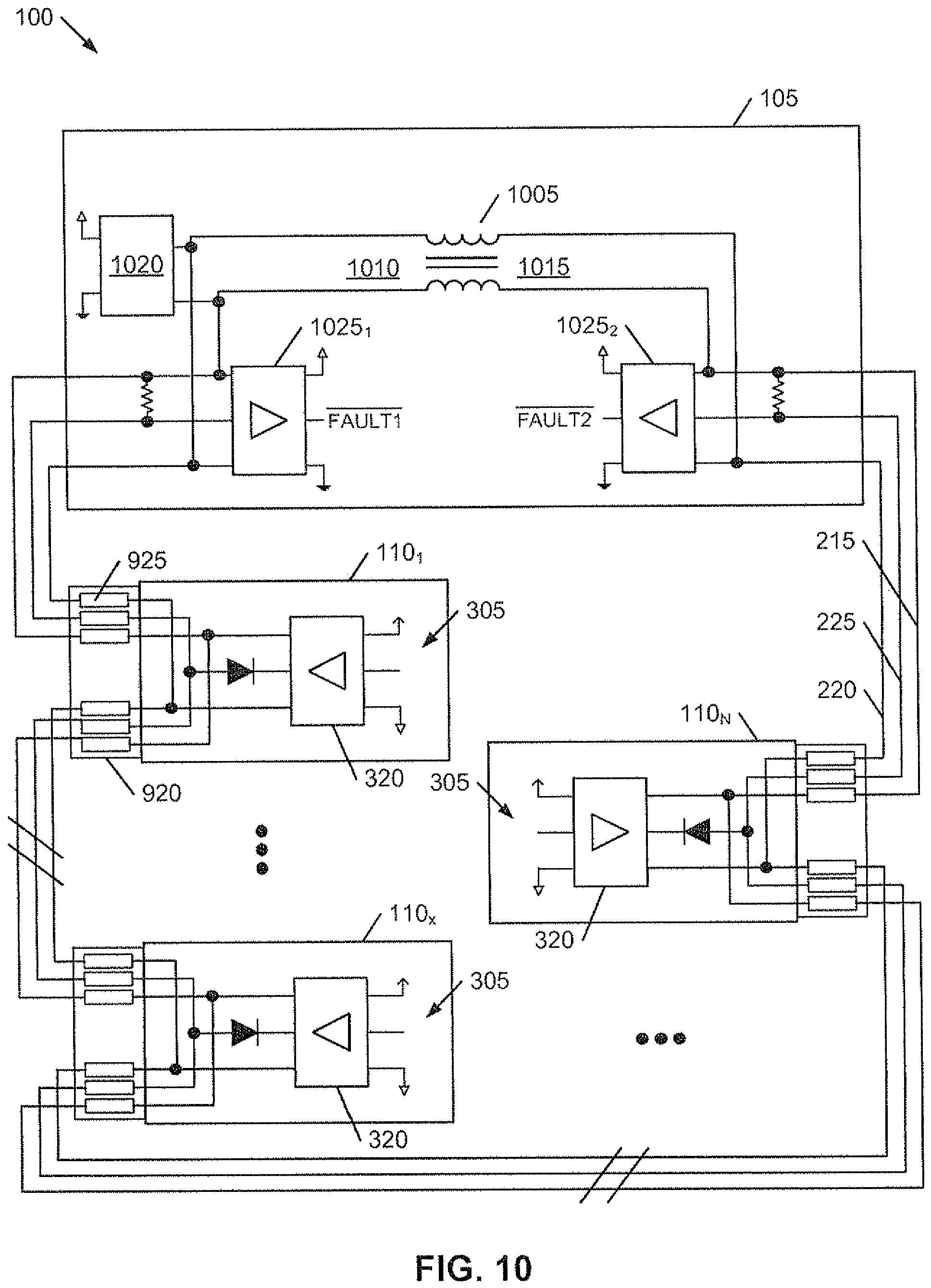 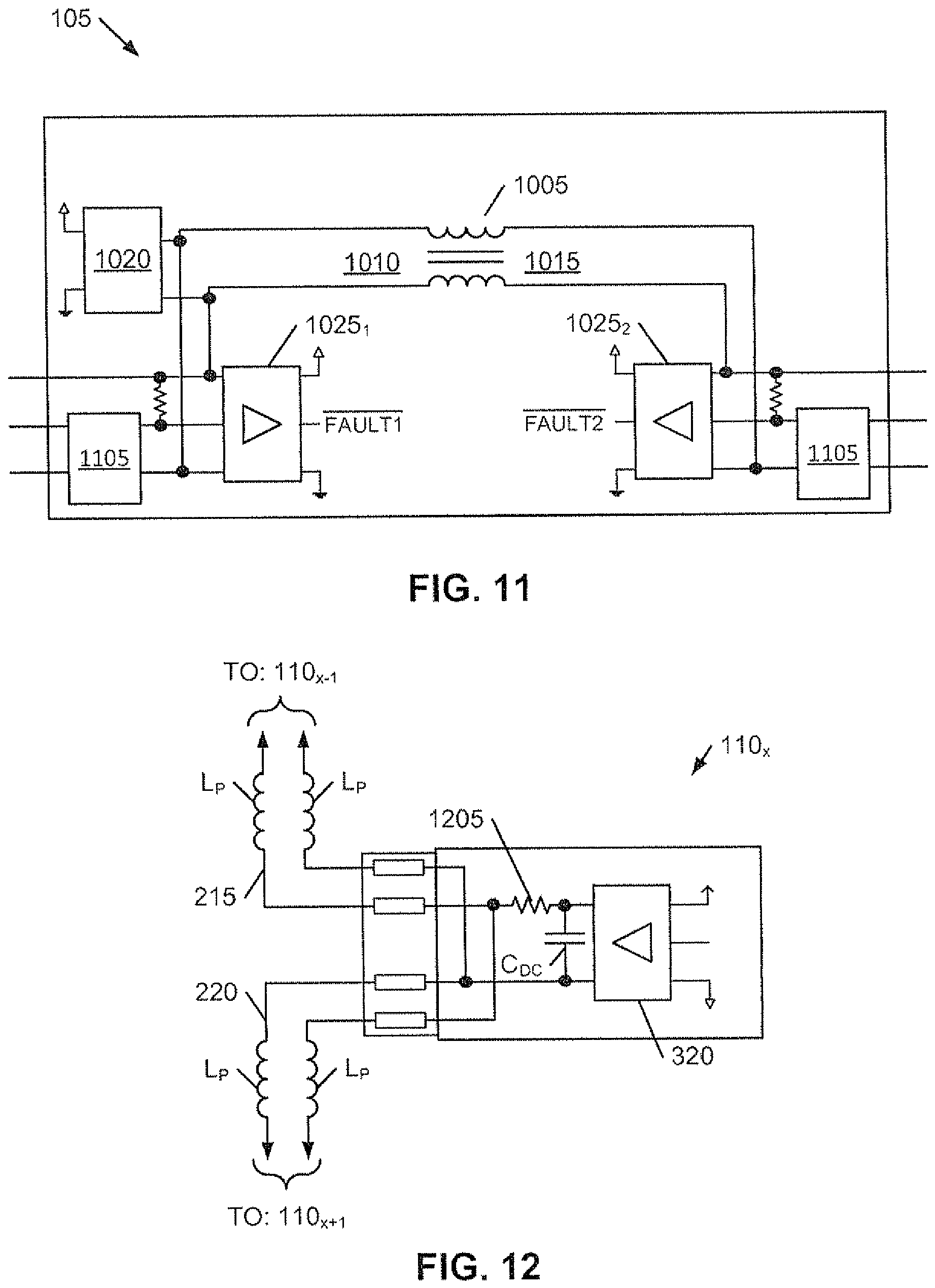 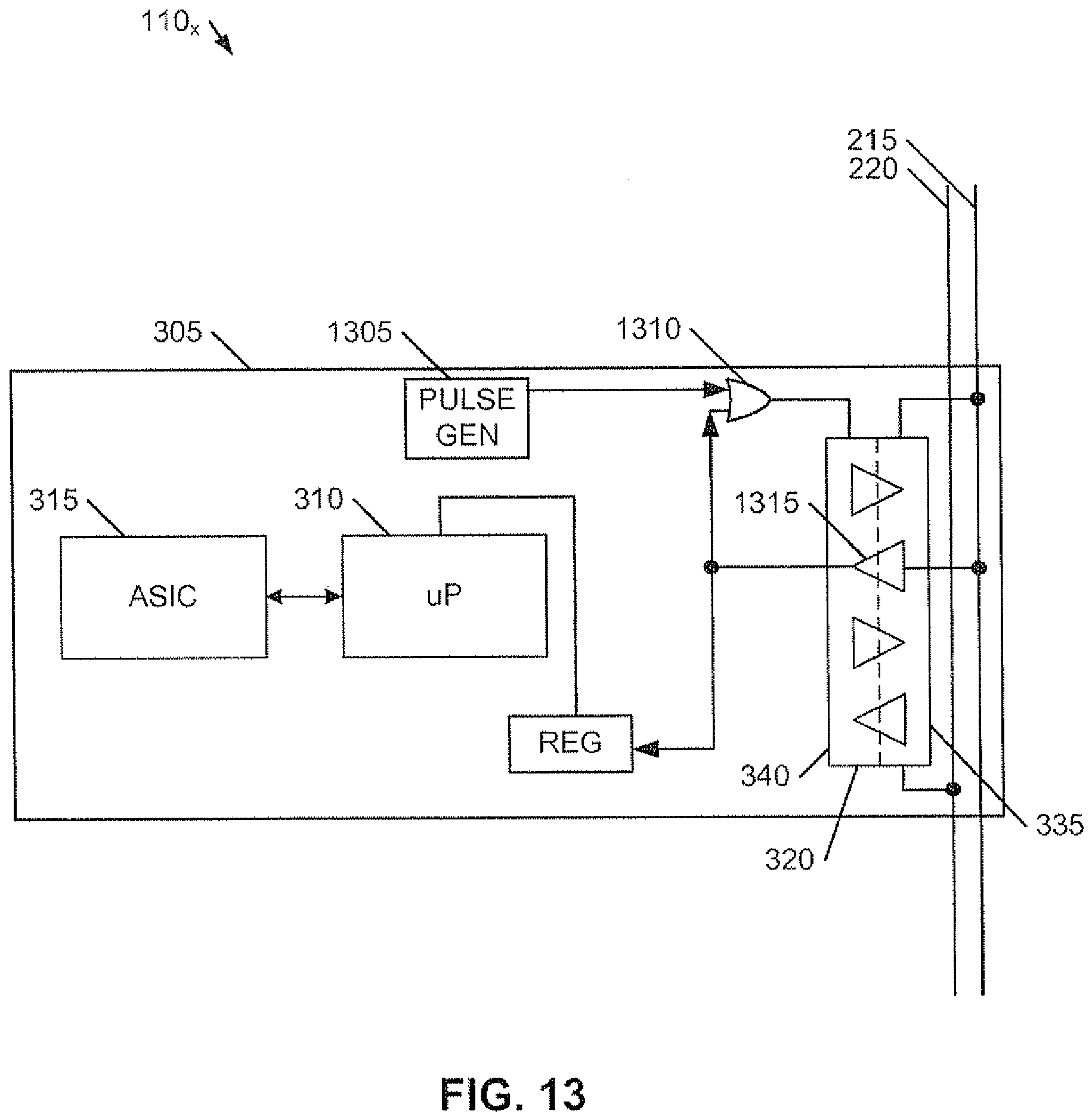 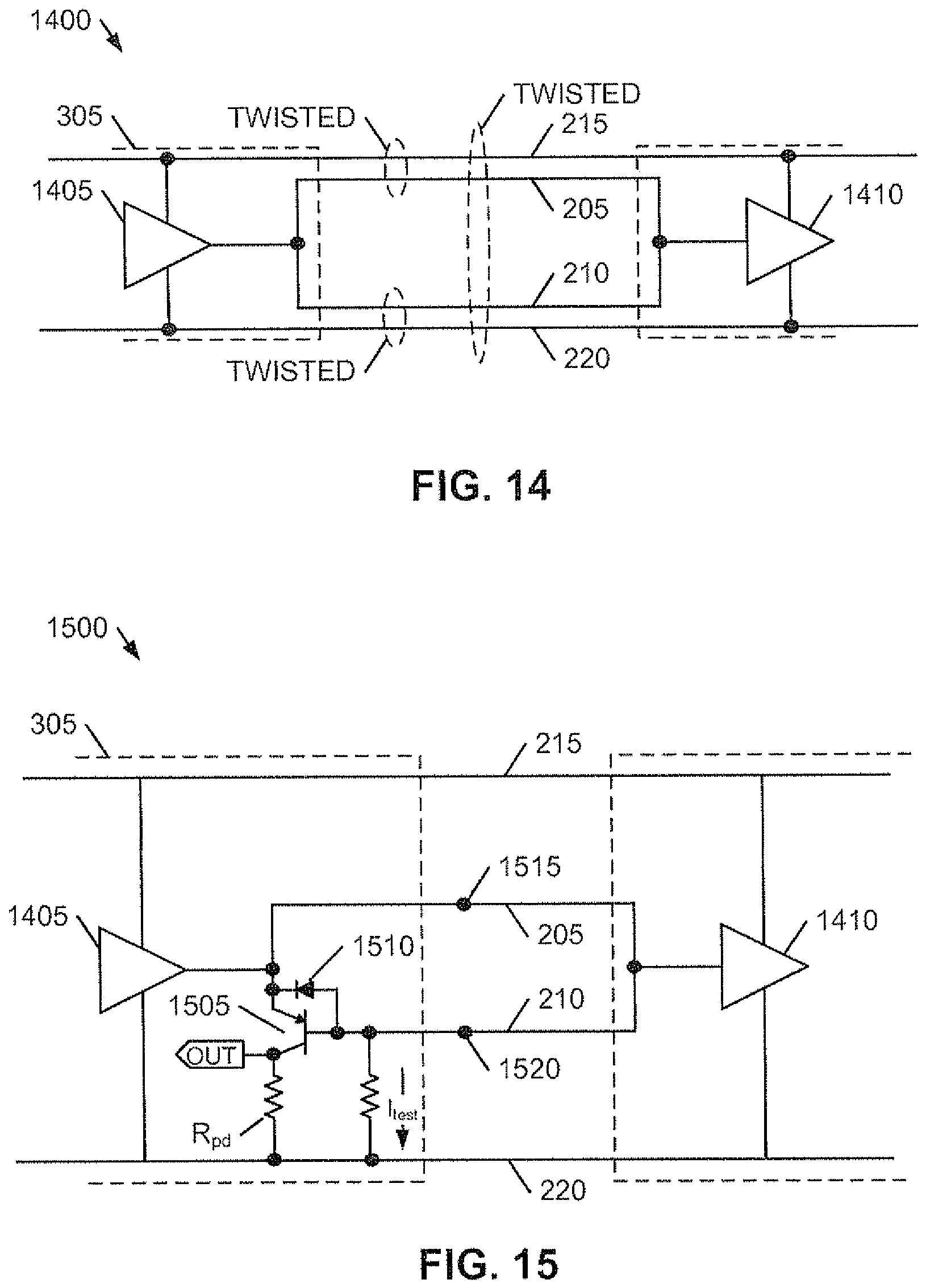 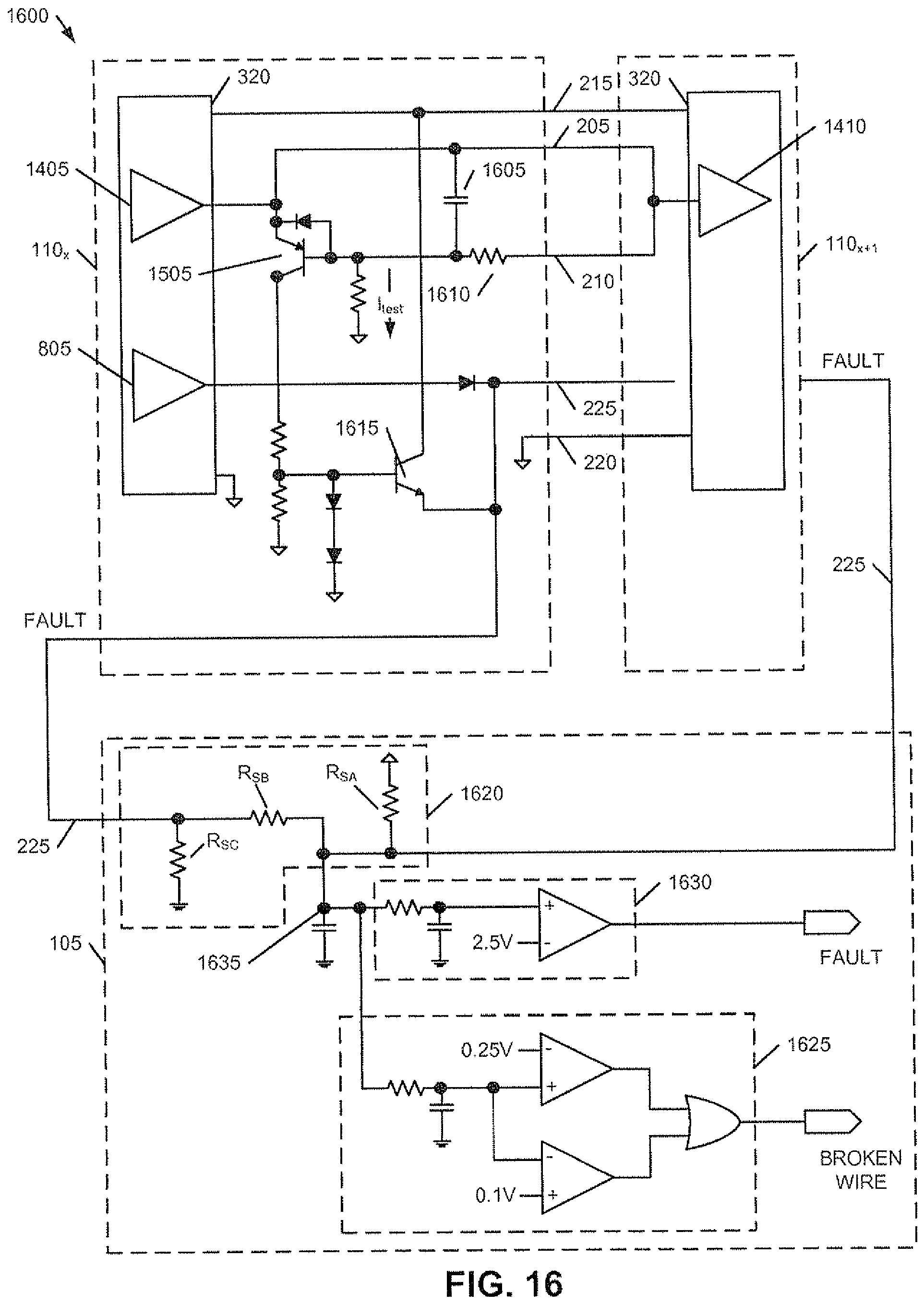 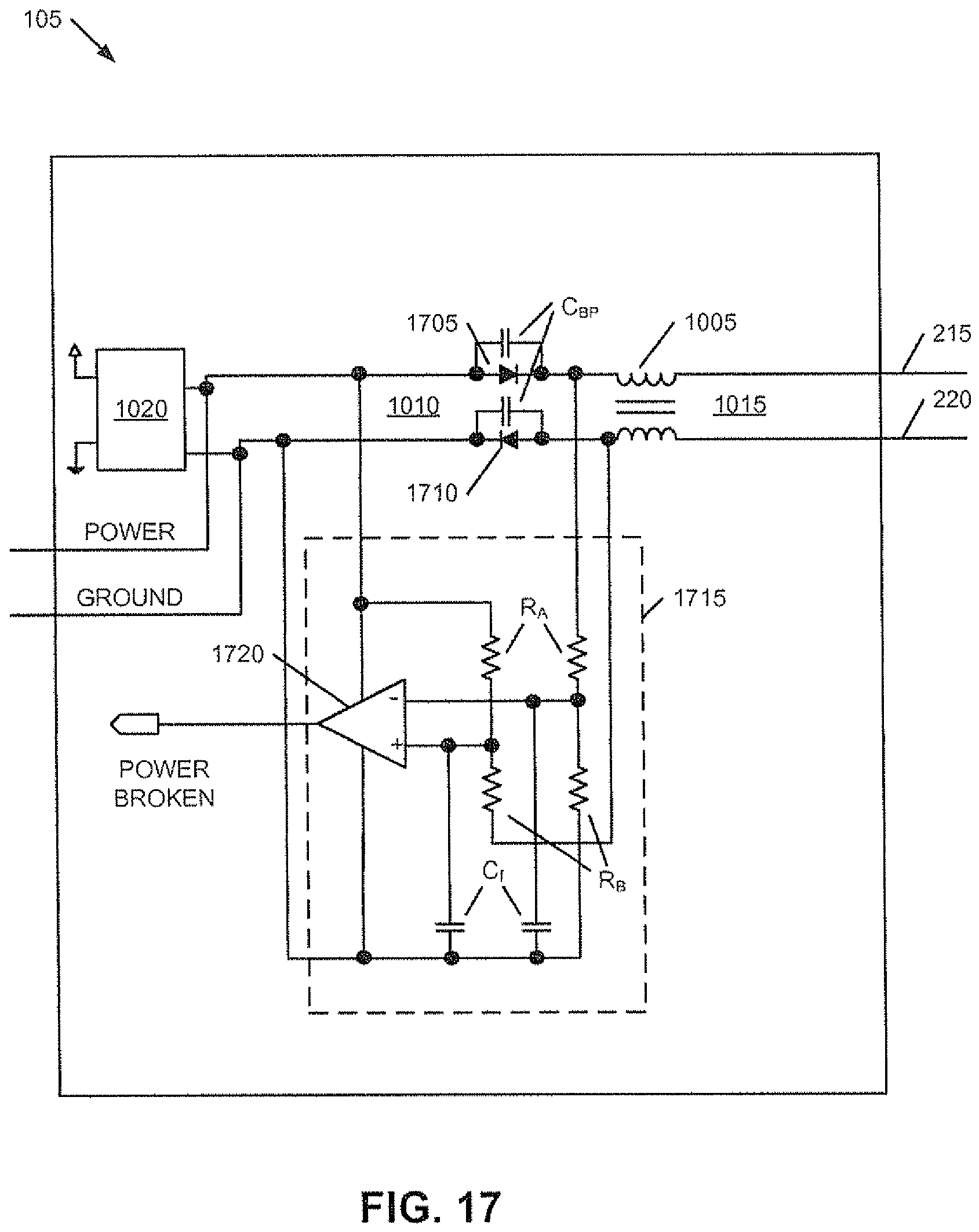 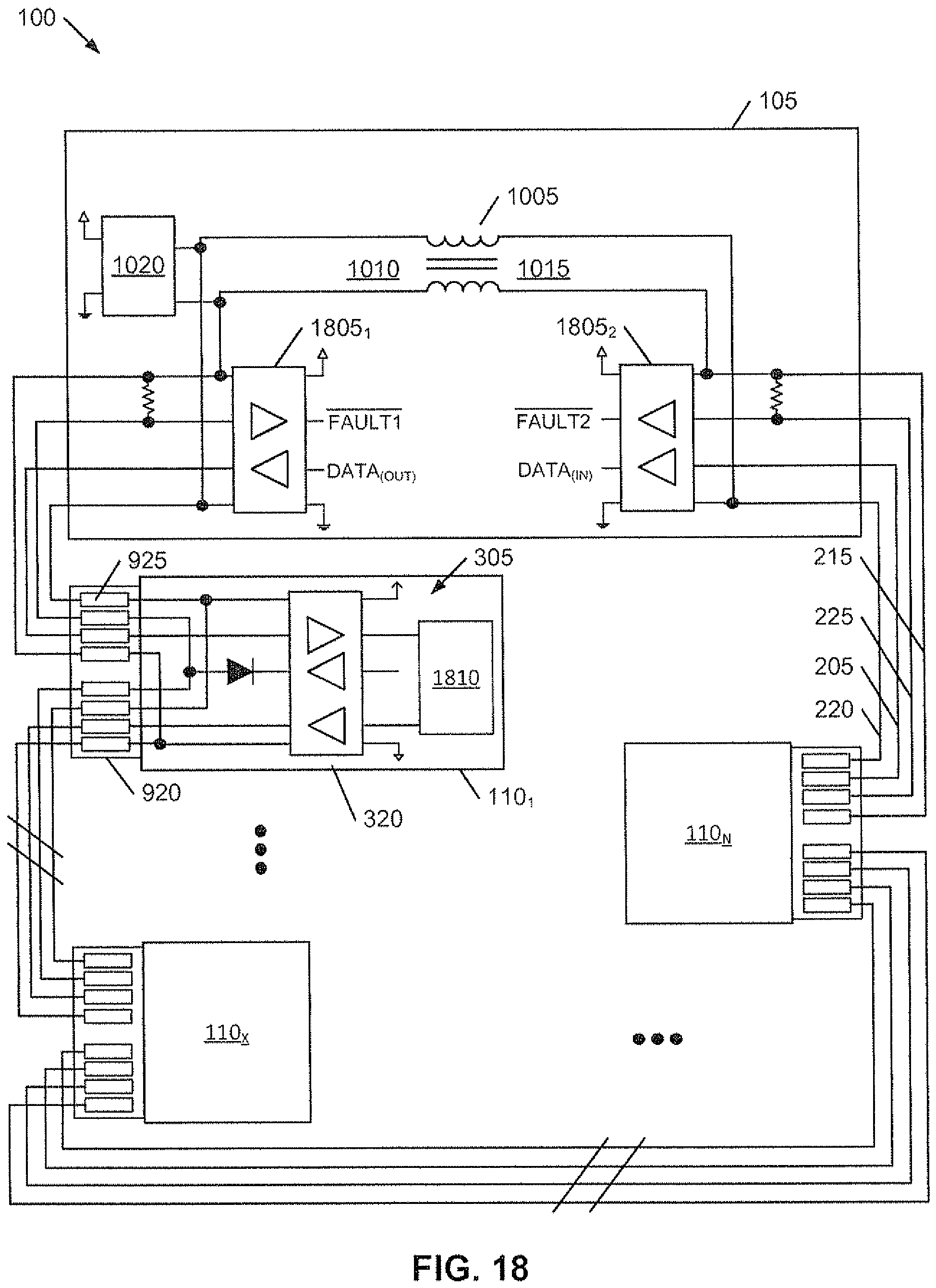 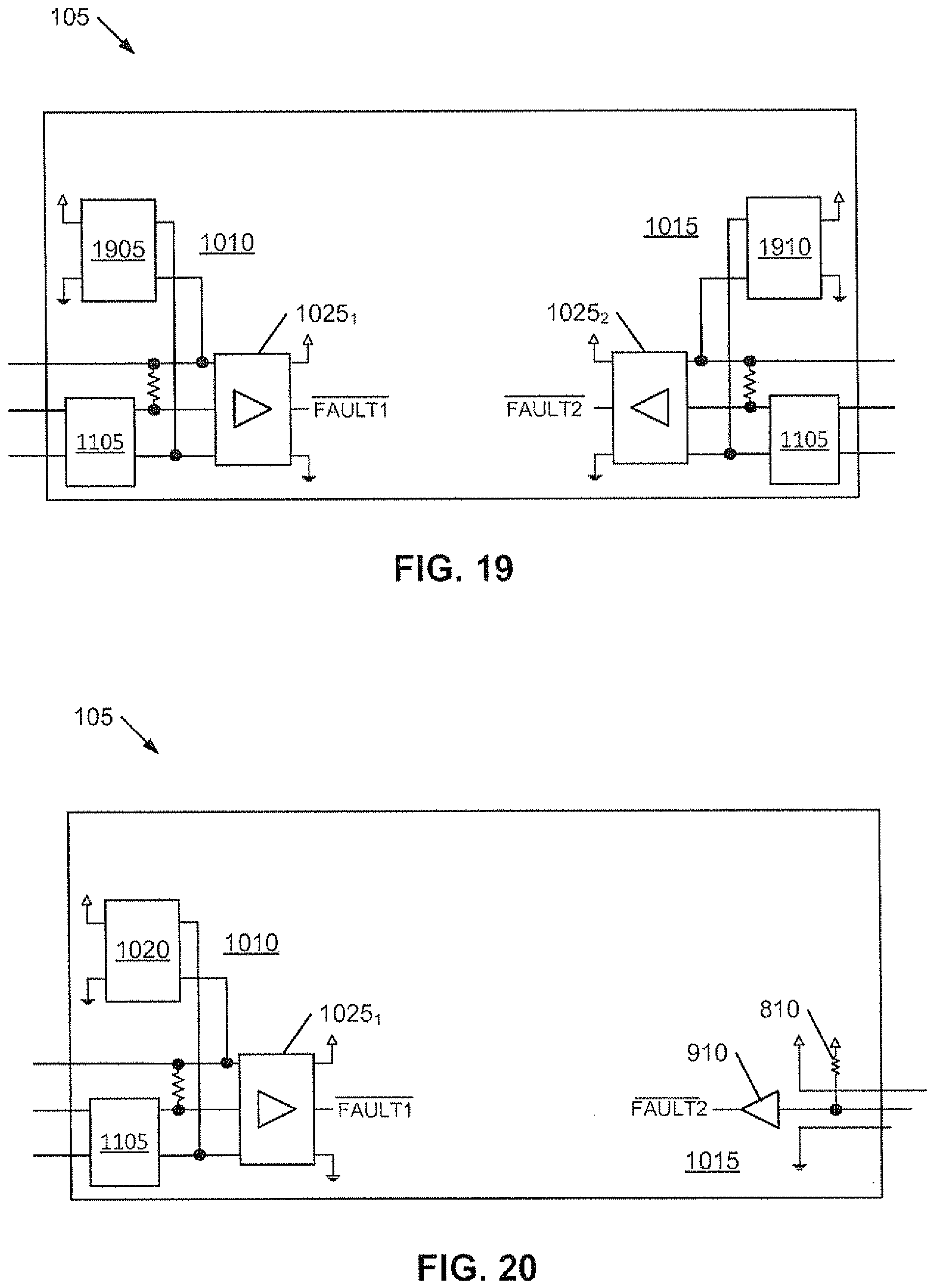