[0002] Combustion is a chemical process involving a fuel and an oxidant that results in a conversion of chemical species and the production of heat. Generally, internal combustion engines combine substantially stoichiometric ratios of fuel and oxidant within a cylinder and a spark plug ignites the reactants and initiates a combustion process. The exothermic nature of the combustion reaction causes the temperature and pressure within the cylinder to increase, which causes the cylinder to expand by thrusting the piston outward, which in turn generates the power to drive the crank shaft and produce the desired result (accelerate a vehicle, propel lawnmower blades, etc.) The amount of power produced by an internal combustion engine is directly proportional to the completeness of the combustion reaction and the characteristics of the fuel and oxidant.
[0003] Although a combustion reaction depends on many different variables, one of the most important factors in an efficient combustion reaction is the ability of the reactants, the fuel molecules and the oxidant molecules, to interact with each other. Therefore, an efficient combustion reaction would involve providing for the fuel molecules to be substantially and evenly dispersed throughout the oxidant molecules, thereby allowing sufficient interactions between the reactants and promoting the combustion reaction. However, most fuels used in internal combustion engines are liquids, such as gasoline, diesel, bio-fuels, and the like, and since combustion occurs in the gas phase, achieving a substantially even dispersion of fuel molecules among oxidant molecules can prove difficult. Due to the vapor pressure of liquids, most liquid fuels have at least a minimum concentration of vapor fuel molecules evaporated at the surface of the liquid, which enables combustion to occur. However, this limited concentration of vapor phase fuel molecules severely limits the initial rate of the combustion reaction.
Conventional systems and methods attempt to remedy this problem by increasing the quantity of gas phase fuel molecules by increasing the temperature of the liquid fuel to increase the vapor pressure. Also, conventional systems and methods involve spraying the liquid fuel into fine mist particles to promote evaporation.
[0004] To increase efficiency CN1096566A teaches a carburetor comprising an oscillator where fuel is broken into ultrafine particles of fuel. The carburetor can contain two chambers with oscillators where one chamber provides a water mist and the other a fuel mist that is mixed using two nozzles. Similarly, CN1135573A teaches a carburetor comprising an oscillator where fuel is broken into ultrafine particles of fuel, with no teaching of employing water in any form. DE2637857 teaches a fuel supply instillation where a fuel is introduced into an elastomer pail supporting an oscillator that causes atomization of fuel residing above the oscillator and carried with the suction air into the intake passage of an engine. EP1552879A1 teaches an apparatus using an oscillator to homogenize water particles into a liquid fuel to suppress phase separation of the continuous emulsion of water in fuel. US4463708 teaches a system to homogenize water and fuel by heating the fuel and water to their vapor state and condense a homogeneous liquid for placement in a storage vessel. This art does not teach ultrafine fuel and water particles formed for direct introduction to the intake of a combustion engine.

Figure 1 is a block diagram illustrating a cross-sectional view of a fuel vaporizer, not being covered by the present invention;

Figure 2 is a block diagram illustrating a cross sectional view of a hybrid fuel system in accordance with the present invention;

Figure 3 is a block diagram illustrating a system for atomizing water in a micron particle size mist, not being covered by the present invention;

Figure 4 is a schematic block diagram illustrating a device 400 for the hydrolysis of water, not being covered by the present invention;

Figure 5 is a schematic block diagram illustrating a spark plug, not being covered by the present invention;

Figure 6 is a block diagram illustrating a cross sectional view of another example of a hybrid fuel system, not being covered by the present invention;

Figure 7A and 7B illustrate an exemplary nozzle that may be used in a hybrid fuel system, not being covered by the present invention;

Figure 8 illustrates a hybrid fuel system that utilizes two nozzles, not being covered by the present invention;

Figure 9 illustrates a process for burning a water/accelerant mixture; and

Figure 10 illustrates a process for burning a water/accelerant mixture. The examples shown in Figures 1 and 3 to 8 do not form part of the present invention.

a chamber (202) having a vapor portion over and in fluid communication with a liquid portion ;

an air inlet (204) configured to deliver air to the chamber;

a fuel inlet (208) and a water inlet (206) configured to deliver fuel and water to the liquid portion of the chamber;

an outlet (226) configured to deliver the mist of particles comprising the fuel and the water from the vapor portion of the chamber to an intake line of an engine.

providing a fuel vaporizer according to claim 1;

feeding water and fuel through the respective fuel and water inlets into the liquid portion of the chamber;

driving the oscillator array, wherein the mist of particles comprising the fuel and the water is created in the vapor portion of the chamber; and

delivering the mist of particles comprising the fuel and the water from the vapor portion of the chamber to an intake line of an engine. 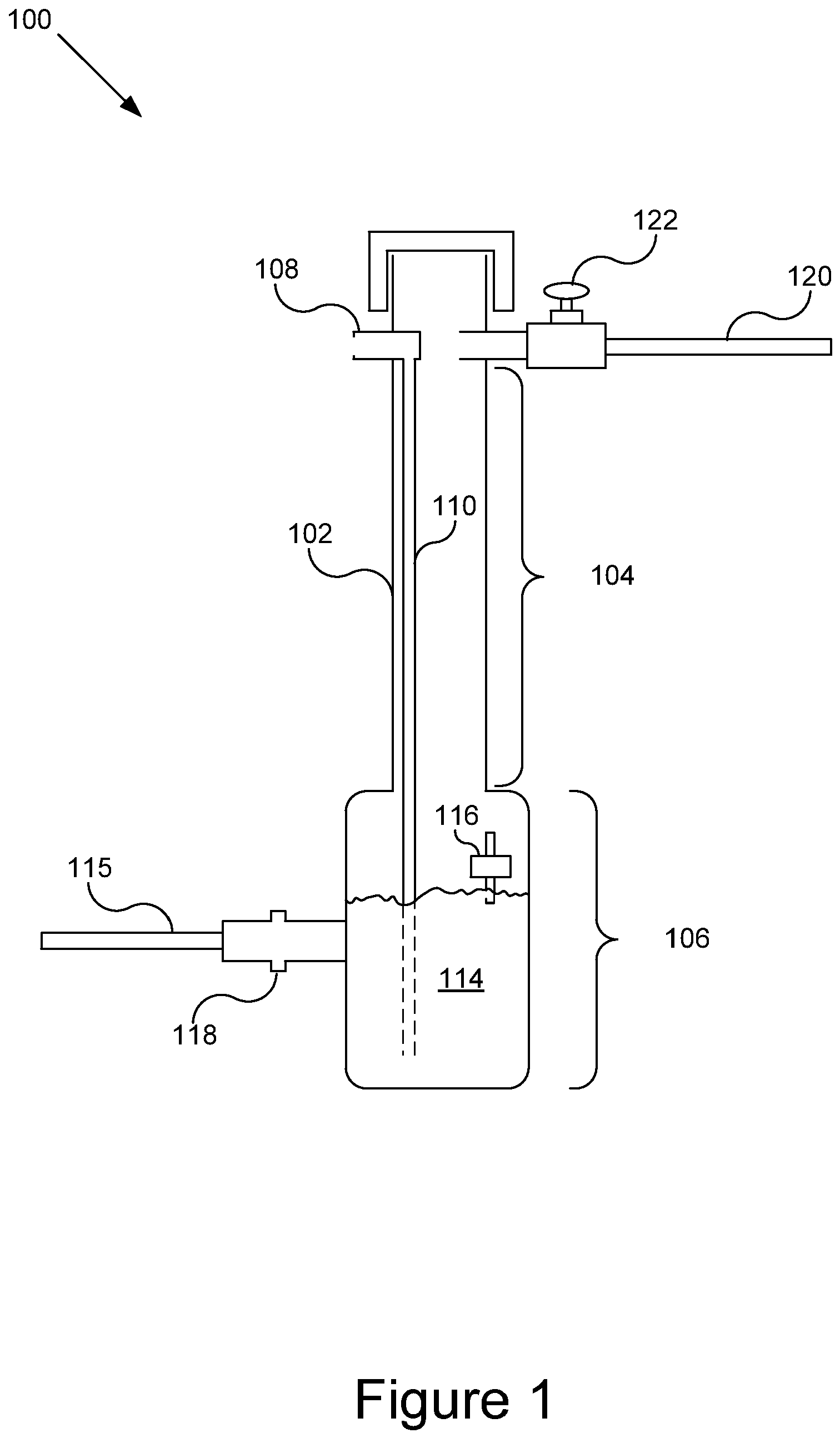 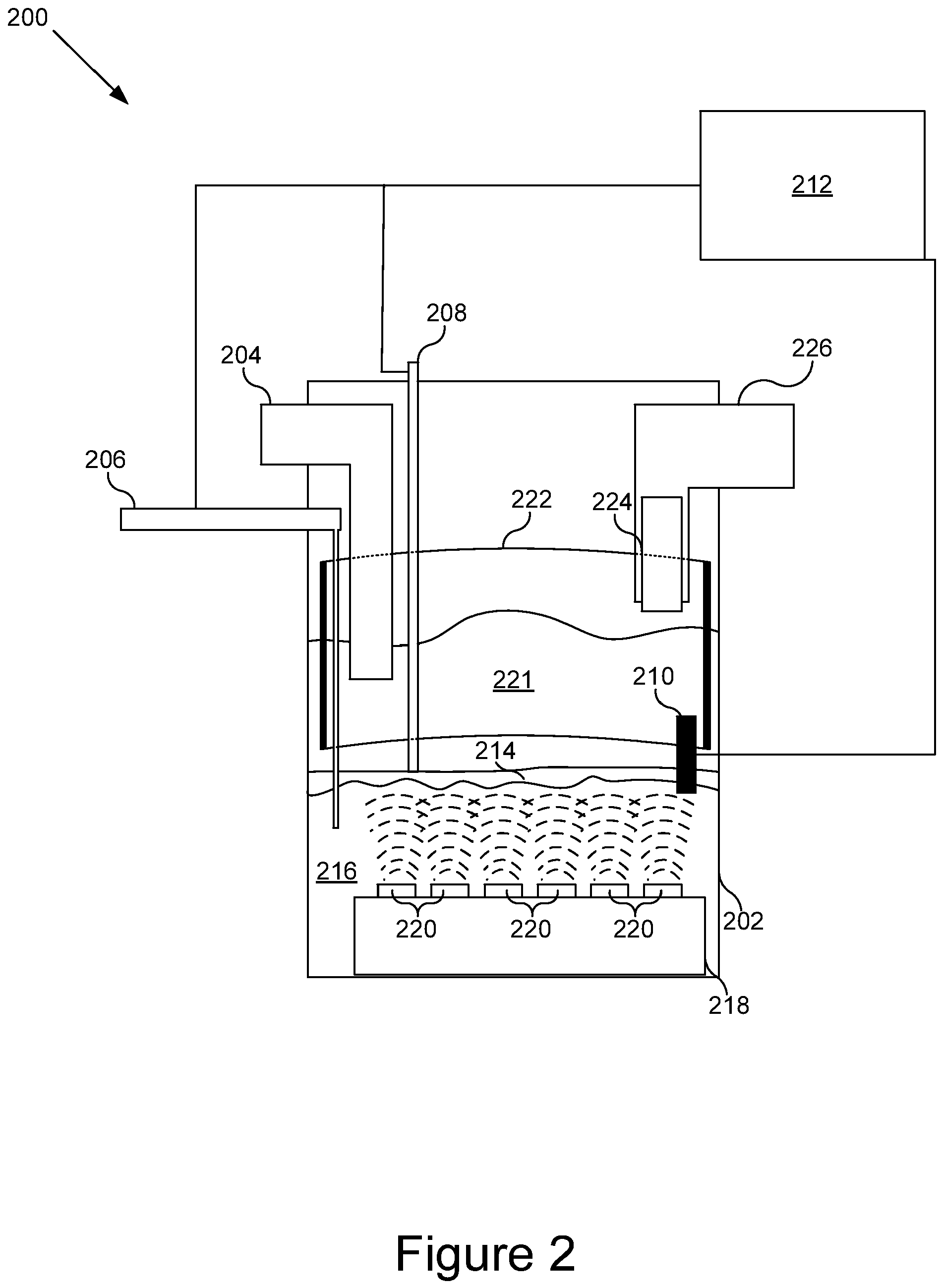 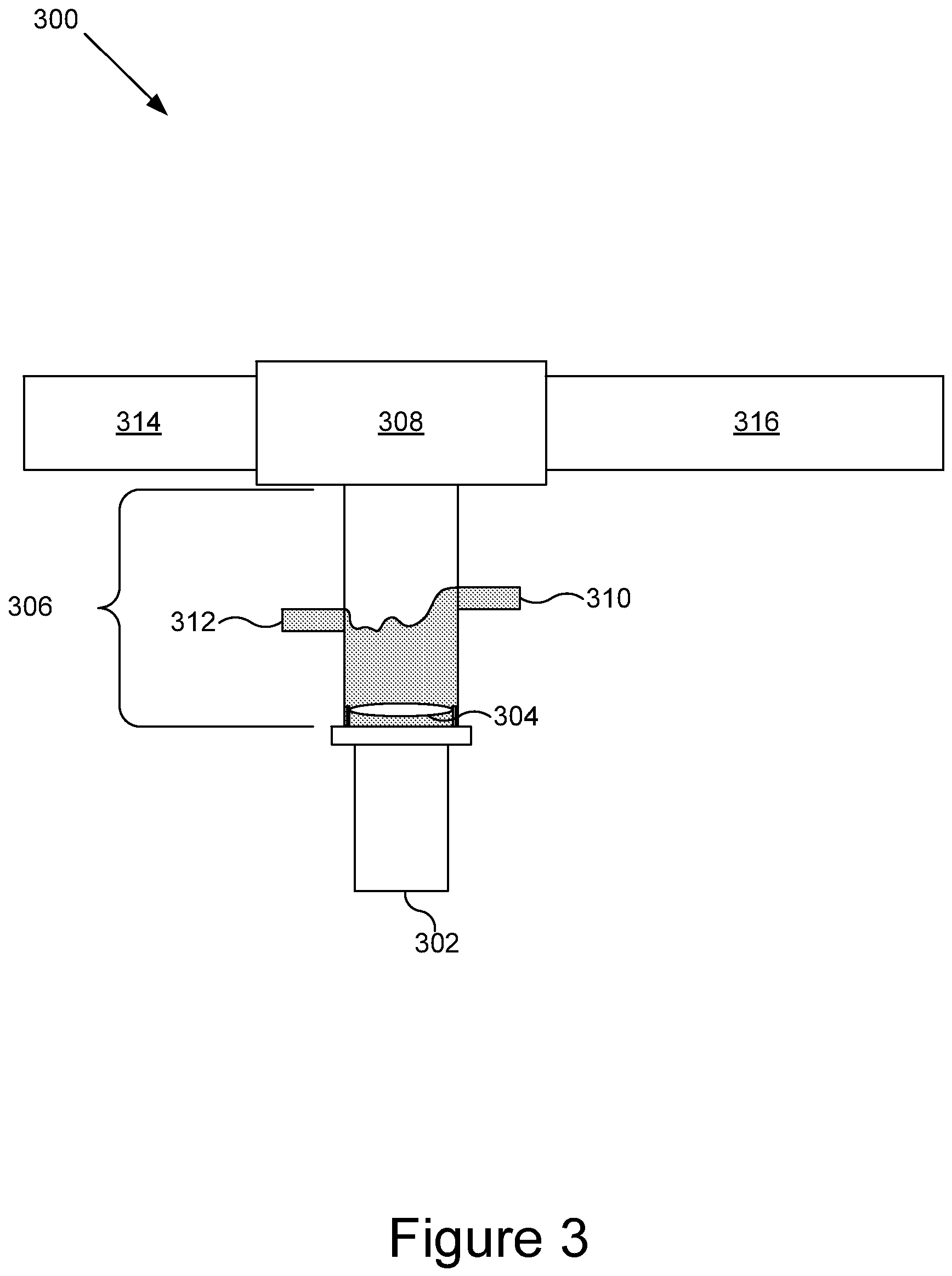 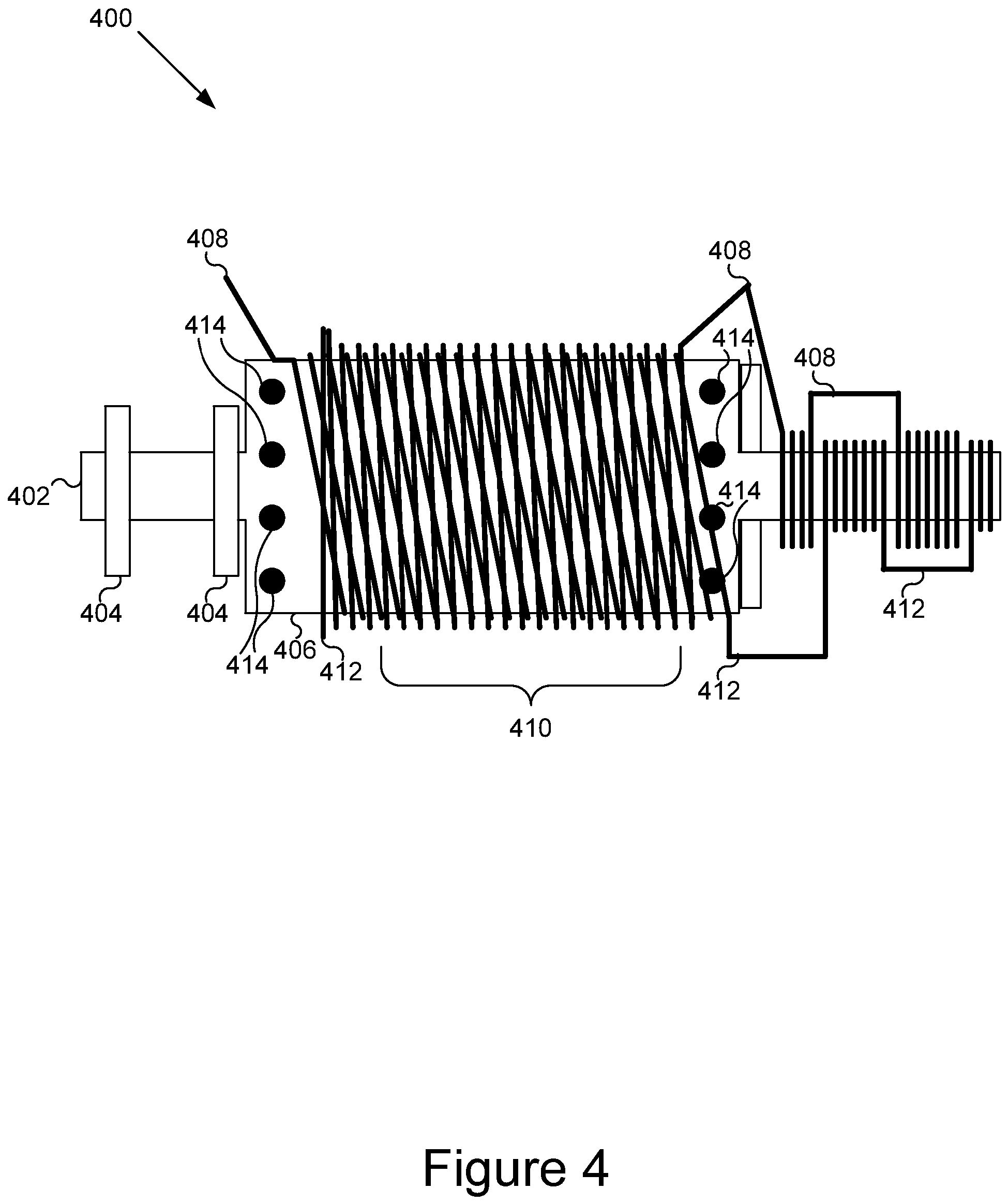 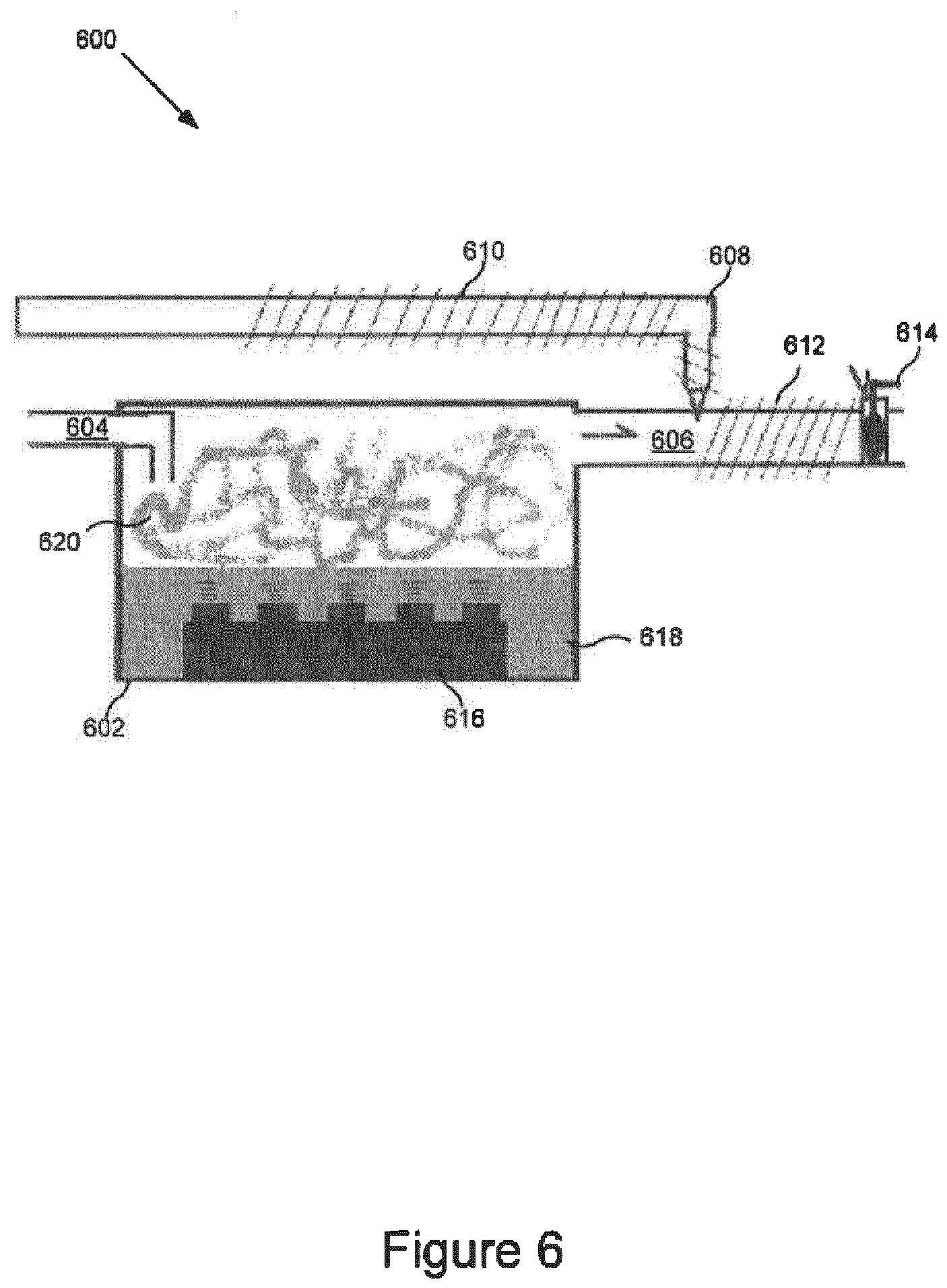 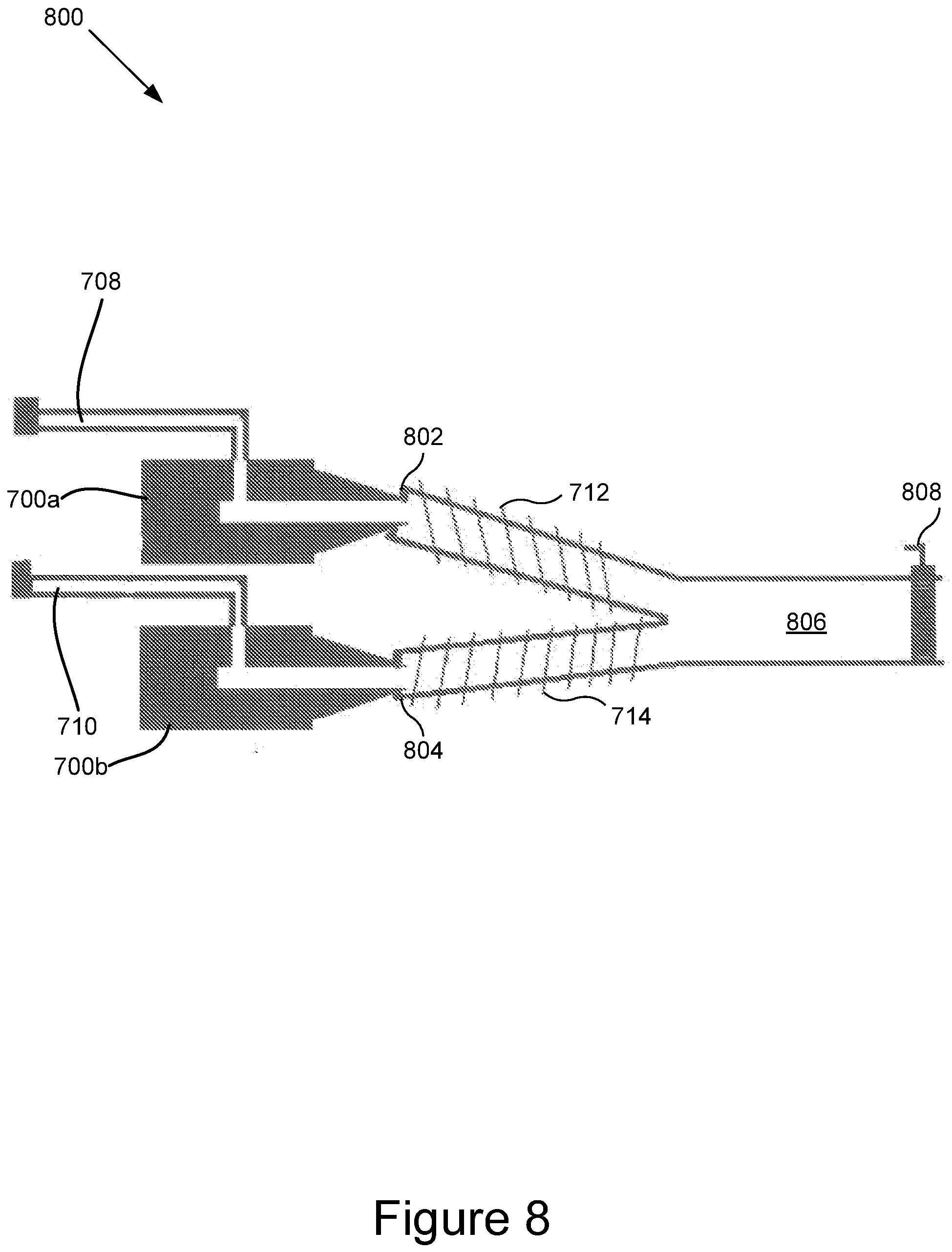 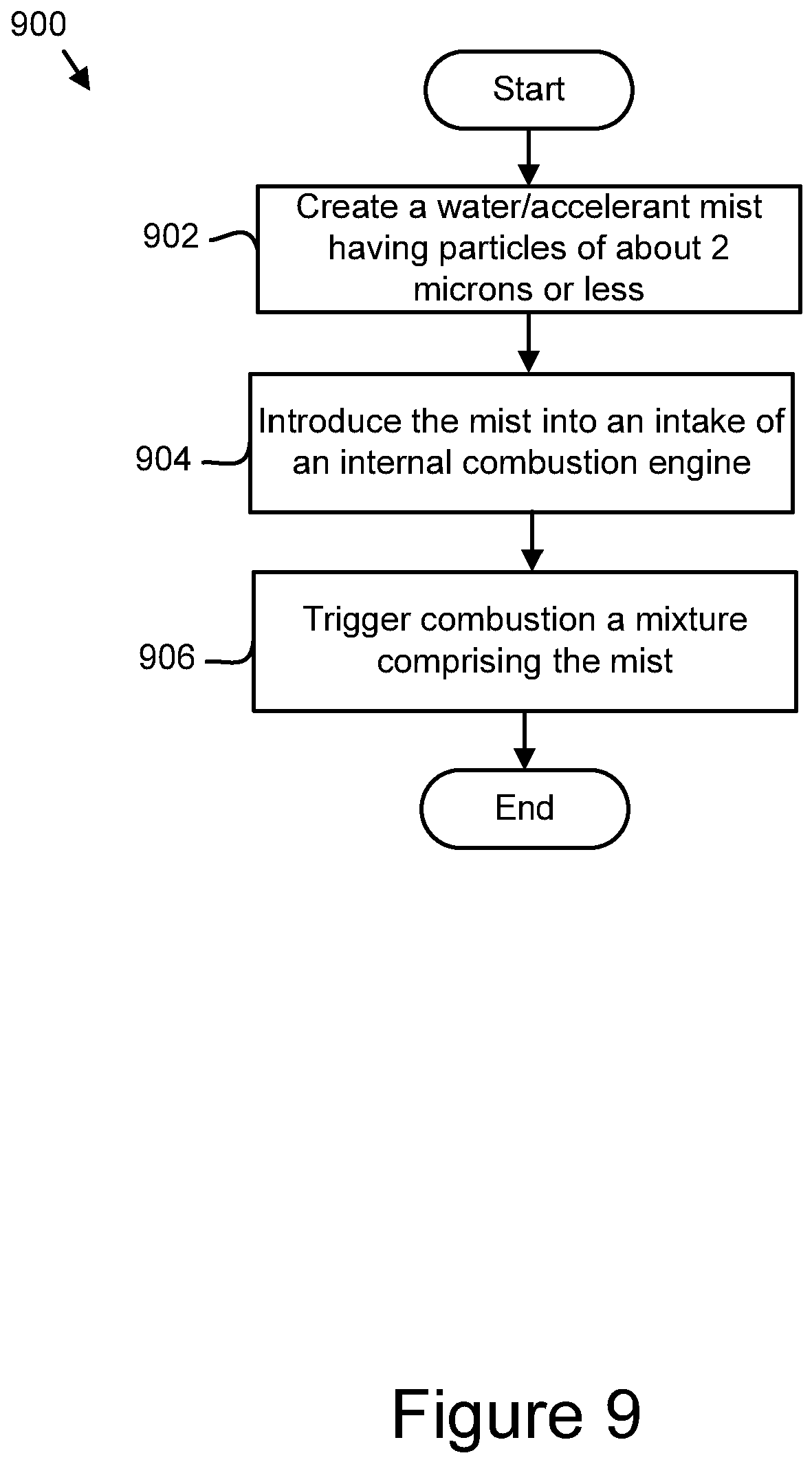 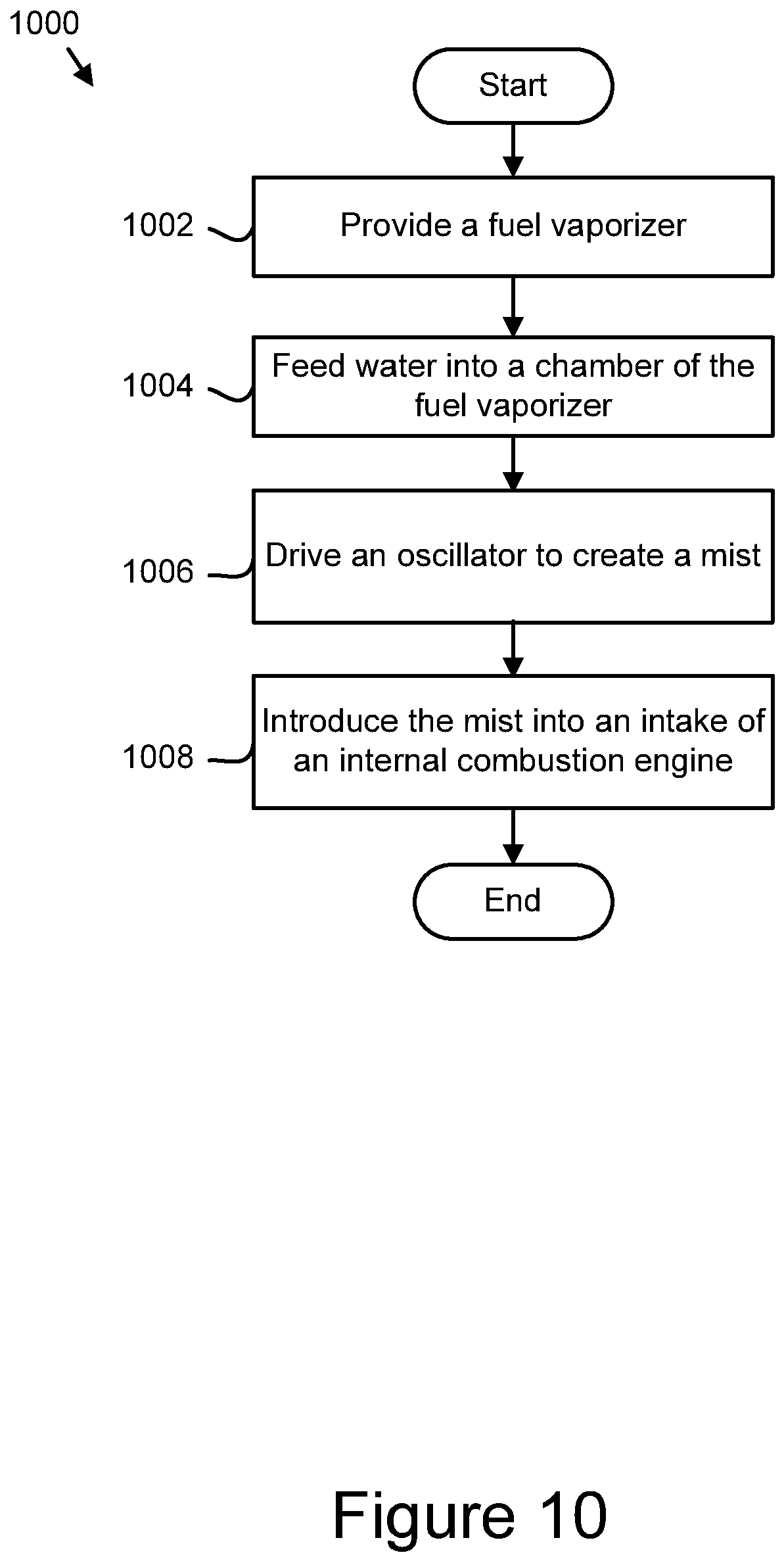