in the event of an emergency, sending a wireless signal into the well to a safety mechanism according to the first aspect of the invention.

a plurality of casing strings;

a packer apparatus provided on one of the casing strings;

the packer apparatus comprising a wireless transceiver, and adapted to expand in response to a change in a wireless signal in order to restrict flow of fluid through an annulus between said casing string and an adjacent elongate member.

[0080] As noted above, the packer may be provided in use in the expanded configuration and act as a permanent barrier to resists fluid flow or may be provided in the unexpanded configuration and activated as required, for example in response to an emergency situation. Moreover the packer may be adapted to move from an expanded configuration, corresponding to the second position of the safety mechanism where fluid flow is restricted (normally blocked) and retract to the first position where fluid flow is permitted.
[0081] The adjacent elongate member may be another of the casing strings or may be a drill pipe or may be production tubing.
[0082] A packer as described herein may be used on a production string in an emergency situation.
[0083] For example in a gas lift operation the packer may be provided on the production tubing and activated only in the event of an emergency.
[0084] Typically the packer is provided as a permanent barrier when the adjacent member is another casing string, and in the unexpanded configuration when the elongate member is a drill pipe or production tubing that is they remain unexpanded until they expand in response to an emergency situation.
[0085] Whilst the packer of the packer apparatus may expand in an inward or outward direction, preferably it is adapted to expand in an inward direction.
[0086] The annulus may be a casing annulus.
[0087] Thus an advantage of such embodiments is that fluid flow through an annulus can be inhibited, preferably stopped, by provision of such a packer in an annulus. Normally fluid does not flow through the casing annulus of a well and so the skilled person would not consider placing a packer in this position. However the inventors of the present invention have realised that the casing annulus is a flow path through which well fluid may flow in the event of a well failure and blow out. Such an event may be due to failure of the formation, cement and/or seals provided with the casing system and wellhead.
[0088] Preferably a plurality of packer apparatus are provided. Different packer apparatus may be provided in the same or in different annuli.
[0089] Preferably the packer apparatus is/are provided proximate to the top of the well. In this way the packers can typically inhibit fluid flow above the fault or suspected fault, in the casing. Therefore the packer(s) may be provided within 100m of the wellhead, more preferably within 50m, especially within 20m, and ideally within 10m.
[0090] The packers provided in a casing annulus may be non-weight packers, that is they do not necessarily have engaging teeth for example the packers may be inflatable or swell types.
[0091] The casing packers may be installed above the cemented-in section of the casing and they thus typically provide an additional barrier to flow of fluids above that traditionally provided by a portion of the well being cased in.
[0092] In alternative embodiments the packers may be provided on an inner side of the casing adjacent to a cemented in portion of the casing, thus inhibiting a flow path at this point, whilst the cement inhibits the flow path on the outside portion of the casing.
[0093] The safety mechanism may be a packer-like element without a through bore and so in effect function as a well plug or bridge plug.
[0094] In certain embodiments, the packer may be provided on a drill string.
[0095] As drill strings typically rotate and move vertically in a well during a drilling phase, a skilled person would not be minded to provide a packer thereon since a packer resists movement. However the inventors of the present invention note that a packer provided thereof can be used in an emergency situation and so provides advantages.
[0096] Thus the packer may be provided on drill string, production string, production sub-assembly and may operate in cased or uncased sections of the well.
[0097] The safety mechanisms and packers described herein may also have additional means of operation such as hydraulic and/or electric lines.
[0098] Unless otherwise stated methods and mechanisms of various aspects of the present invention may be used in all phases including drilling, suspension, production/injection, completion and/or abandonment of well operations.
[0099] The wireless signal for all embodiments is preferably an acoustic signal although may be an electromagnetic or any other signal or combination of signals.
[0100] Preferably the acoustic communications include Frequency Shift Keying ((FSK) and/or Phase Shift Keying (PSK) modulation methods, and/or more advanced derivatives of these methods, such as Quadrature Phase Shift Keying (QPSK) or Quadrature Amplitude Modulation (QAM), and preferably incorporating Spread Spectrum Techniques. Typically they are adapted to automatically tune acoustic signalling frequencies and methods to suit well conditions.
[0101] Embodiments of the present invention may be used for onshore wells as well as offshore wells.
[0102] An advantage of certain embodiments is that the acoustic signals can travel up and down different strings and can move from one string to another. Thus linear travel of the signal is not required. Direct route devices thus can be lost and a signal can still successfully be received indirectly. The signal can also be combined with other wired and wireless communication systems and signals and does not have to travel the whole distance acoustically.
[0103] Any aspect or embodiment of the present invention can be combined with any other aspect of embodiment mutatis mutandis.
[0104] An embodiment of the present invention will now be described, by way of example only, and with reference to the accompanying figures in which:

Fig. 1 is a diagrammatic sectional view of a well in accordance with one aspect of the present invention;

Fig. 2 is a schematic diagram of the electronics which may be used in a transmitting portion of a safety mechanism of the present invention;

Fig. 3 is a schematic diagram of the electronics which may be used in a receiving portion of a safety mechanism of the present invention; and,

Figs. 4a - 4c are sectional views of a casing valve sub in various positions.

(iii) and a wireless receiver (360), adapted to receive a wireless signal; 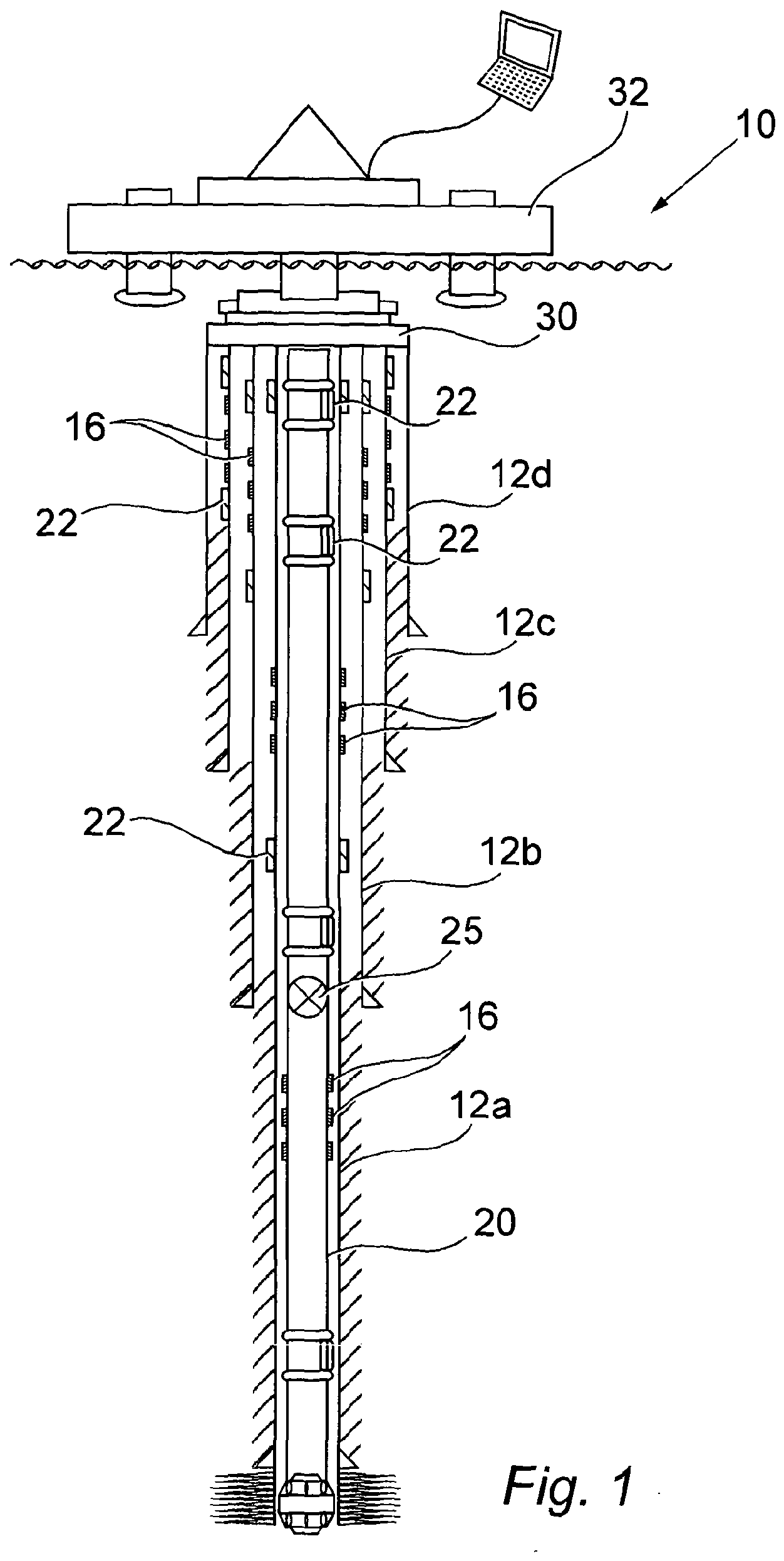 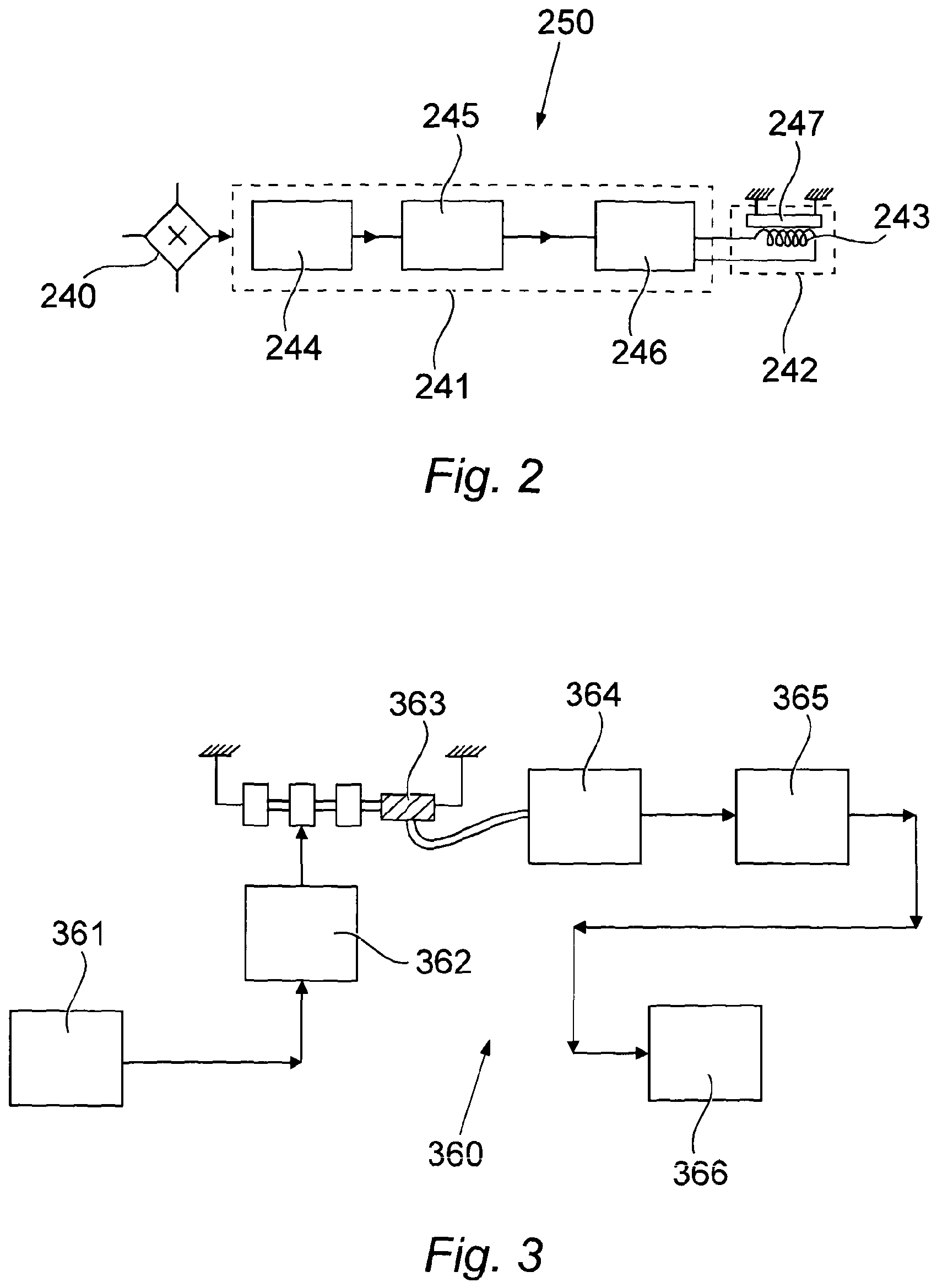 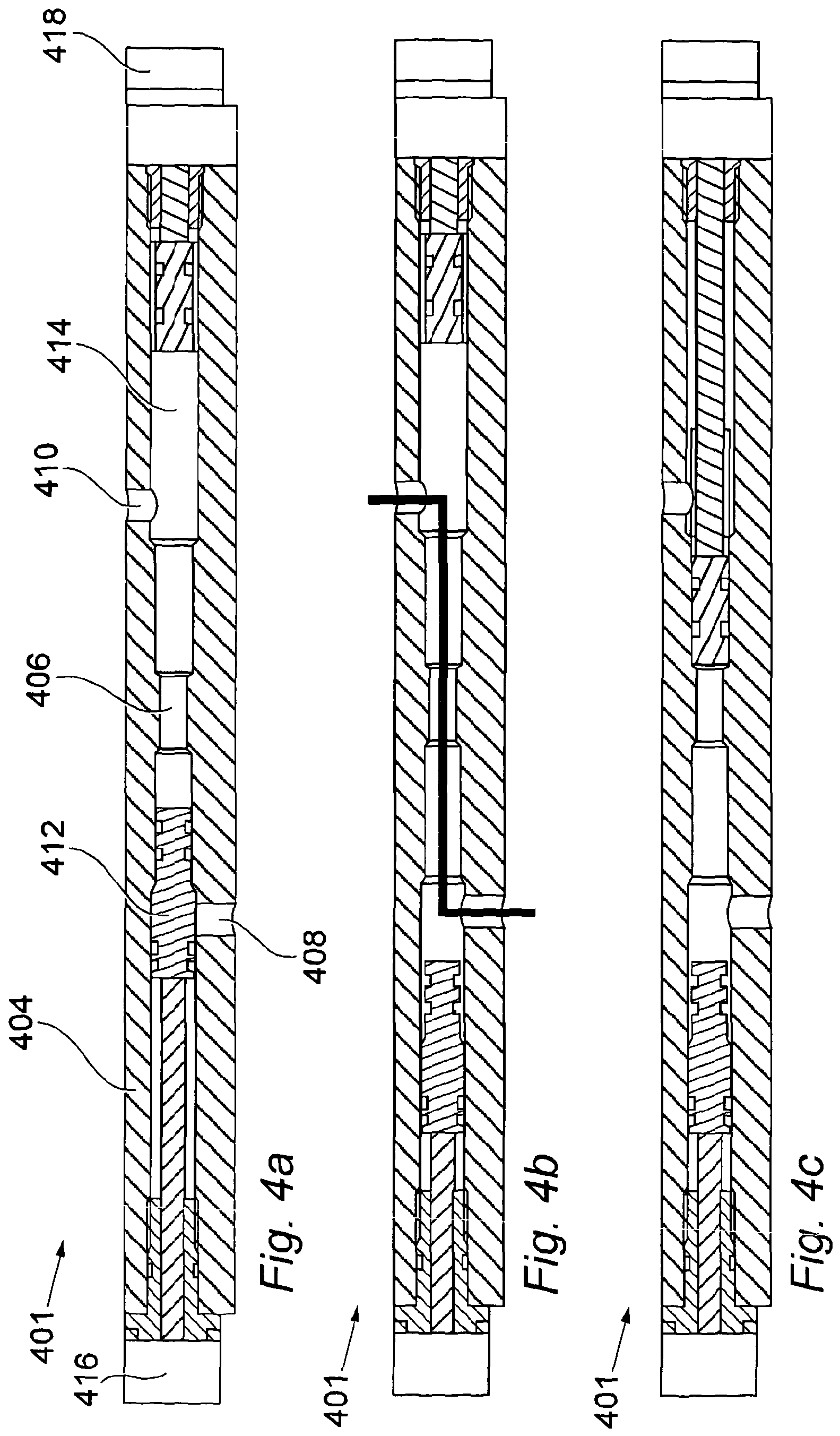