Technical sector of the invention

[0001] The invention belongs to the technical sector of the controllers of the electrical characteristic based on static power converters for renewable energy plants, especially useful in photovoltaic generation plants, which allows offering advanced functionalities to improve the connection of said plants to the electric network.

[0002] The sources of renewable energy, mainly wind power plants (WIN) and photovoltaic (PH) power plants, have ceased to be a marginal resource in the generation of electricity. The generators of PH plants use power converters to connect to the electric network. These power converters, also known as inverters, inject current to the voltage of the network to supply power to the same. In normal operating conditions, the PH inverters inject single-phase o tri-phase sinusoidal currents to the network, depending on the power range of the generator. Normally, the currents injected to the network tend to be sinusoidal and are in phase with the voltages of the coupling point to maximize the amount of active power being generated. There are no PH inverters in the market, at least in on a generalized basis, that inject currents to the quadrature with the network voltages, which allows controlling the reactive power injected to the network with the purpose of regulating the voltage level at the coupling point.
[0003] When the network voltage is affected by a perturbation, such as imbalances, transients, or harmonics, which is usual in electric networks, conventional PH inverters experience problems to remain appropriately synchronized with the network voltage, which leads to uncontrolled power flows that cause the PH inverter to worsen the situation of the failure of the network. With more serious network perturbations, such as voltage dips, short-circuits, or power oscillations, conventional PH inverters cannot offer an appropriate support to the electric network to help maintain the generation system active. In fact, these serious transient perturbations usually cause the disconnection of the network in the majority of the commercial PH inverters due to the triggering of some of its overcurrent or overvoltage protections.
[0004] In order to minimize these inconveniences, virtual synchronous generators are known in the state of the art, which attempt to emulate the behavior of a conventional synchronous generator. The basic input electrical function of a synchronous generator can be described by equation (1), shown below:

[0005] Where Z = (R+sL) is the output impedance, i is the current flowing through said impedance, e is the electromotive force induced in the stator, and v is the voltage in its terminals.
[0006] This equation can be implemented in a power converter to imitate the electrical function of the synchronous generator. In said case, the impedance Z = (R+sL) is not physically connected to the outlet of the converter, but virtually implemented by means of software. All of the techniques existing in the literature to implement a virtual impedance at the outlet of the network connected to an electrical power generator are based on a direct application of equation (1), that is to say, the voltage generated at the outlet of the power converter v results from subtracting the voltage dip in said impedance i(R+sL) from the virtual reference voltage e. Therefore, in all of the techniques found, the power converter acts as a controlled voltage source.
[0007] The current injected by the power converter must be measured with the purpose of calculating the voltage dip in the virtual impedance. In some cases, an internal current control loop control is implemented to protect the power converter in the case of current overloads and to guarantee a better follow-up of the reference voltage v*. The implementation of the internal current loop is not directly related to the implementation of the virtual impedance characteristic of the power converter.
[0008] All of these conventional techniques applying the concept of virtual impedance according to equation (1) present serious control problems when the measured current i is affected by harmonics or transients. The foregoing is due to the fact that processing a derivative term (sL) to calculate the voltage dip in the output impedance is necessary, which makes the system very sensitive to the perturbations of harmonics, transients, and imbalances. Some techniques reported in the literature use filters to attenuate the highfrequency components in the current measurement; however, this solution inhibits the response of the power converter to support the network with respect to this type of perturbations and can even reduce the margin of stability of the system in particular cases.
[0009] Some of the documents showing the implementation of virtual impedance to obtain the output voltage of the converter are found in the following publications:
[0010] The present invention proposes a new concept of controller of the electrical characteristic to solve the aforementioned inconveniences.

[0011] The virtual admittance controller based on static power converters being claimed is a new concept in the control of latest generation renewable power plants that allows offering advanced functionalities to improve the integration of said plants to the electric network.
[0012] This controller comprises an electrical power loop that enables the adjustment of parameters online with the purpose of improving the operation of a power generator under operating conditions. A virtual admittance is implemented in said loop, unlike in conventional controllers of the electrical characteristic, wherein an impedance is implemented.
[0013] At the inlet of the control loop, the existing difference in voltage between a virtual internal voltage and the voltage existing at the network connection point of the power converter is injected. This difference in voltage supplies a virtual admittance, which is in charge of determining the current to be injected to the network by the inverter.
[0014] Its principle of operation, as indicated above, is based on the inversed physical concept applied in conventional techniques. Equation (2) shows the expression that allows implementing virtual admittance at the outlet of the power converter connected to the network.

[0021] With the purpose of facilitating the comprehension of the present invention, several figures have been attached representing the following in an illustrative rather than limitative manner:

Detailed description of a preferred embodiment

1. Virtual admittance controller based on static power converters connected to the network, characterized in that it comprises a control loop into the inlet of which is injected the difference in voltage between a virtual internal voltage (e) and the voltage at the network connection point (v). Said difference in voltages feeds a virtual admittance processor (13) that determines the value of a reference current (i*) that it communicates to a current source (14), said current source physically injecting said current into the network (15), the formula defining said current being the following:

- receive as input signals the voltage (v) and current (i) of the network and/or any other internal element of the power converter, as well as a series of adjustment parameters (c1, c2, ..., cn) and reference current values (I1*, I2*,..., In*) for each frequency and sequence range, and with all of it

- generate the admittance value (Y1, Y2,... Yn) to be applied to each frequency and sequence.

3. Virtual admittance controller according to claim 2, characterized in that the virtual admittance parameters (Y) are dynamically adapted to the conditions of the power network and to other contour conditions, presenting different behaviors for the different input frequency ranges (f1, f2... fn) and for the different input sequences, direct, inverse or homopolar, offering a different admittance (Y1, Y2..., Yn) for each frequency (f1, f2..., fn) and sequence, such that elevated currents can be injected to the fundamental frequency of the network and to the direct sequence and the current minimizing the possible existing perturbation is naturally injected to the other harmonic sequences and frequencies, as well as to transients and imbalances. 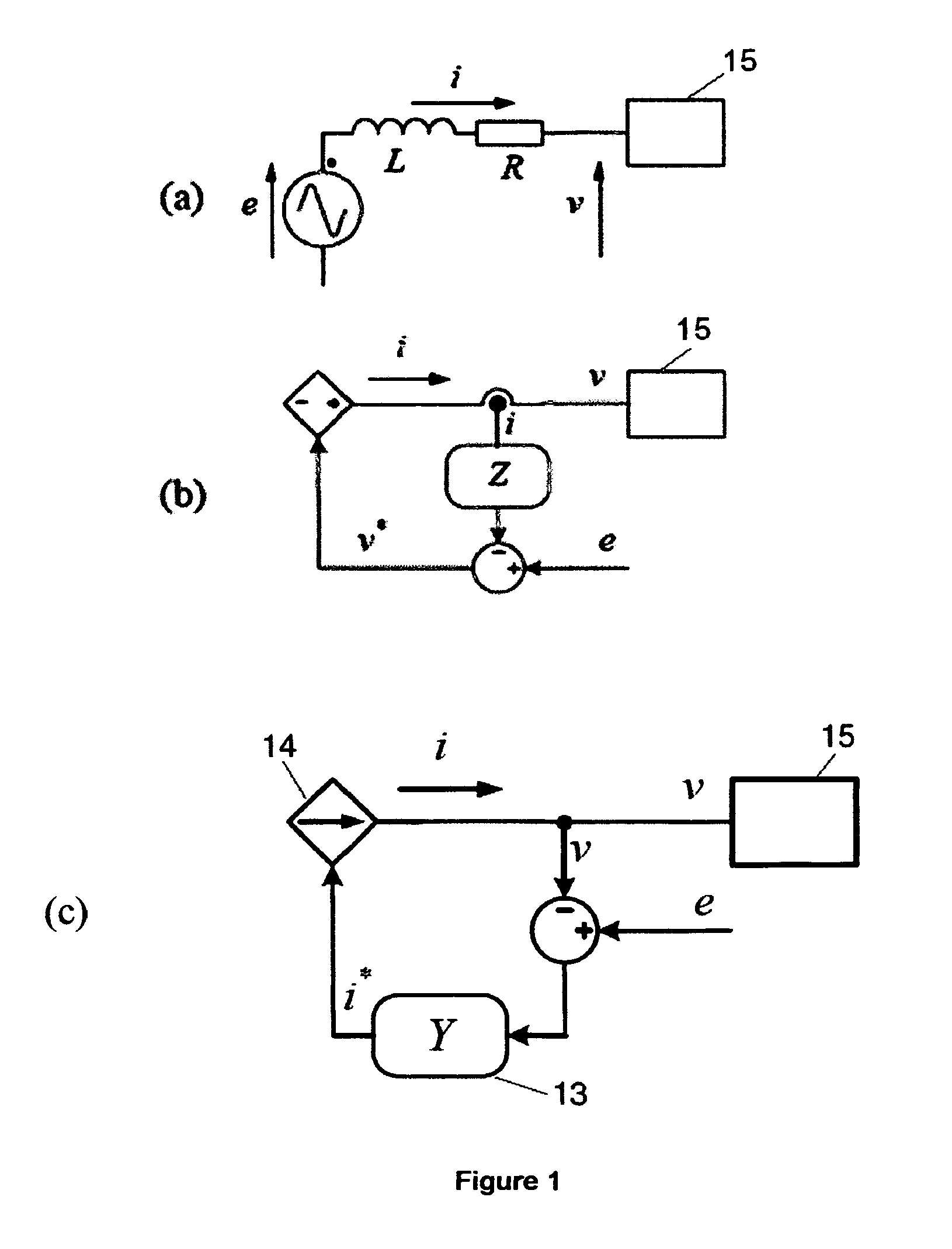 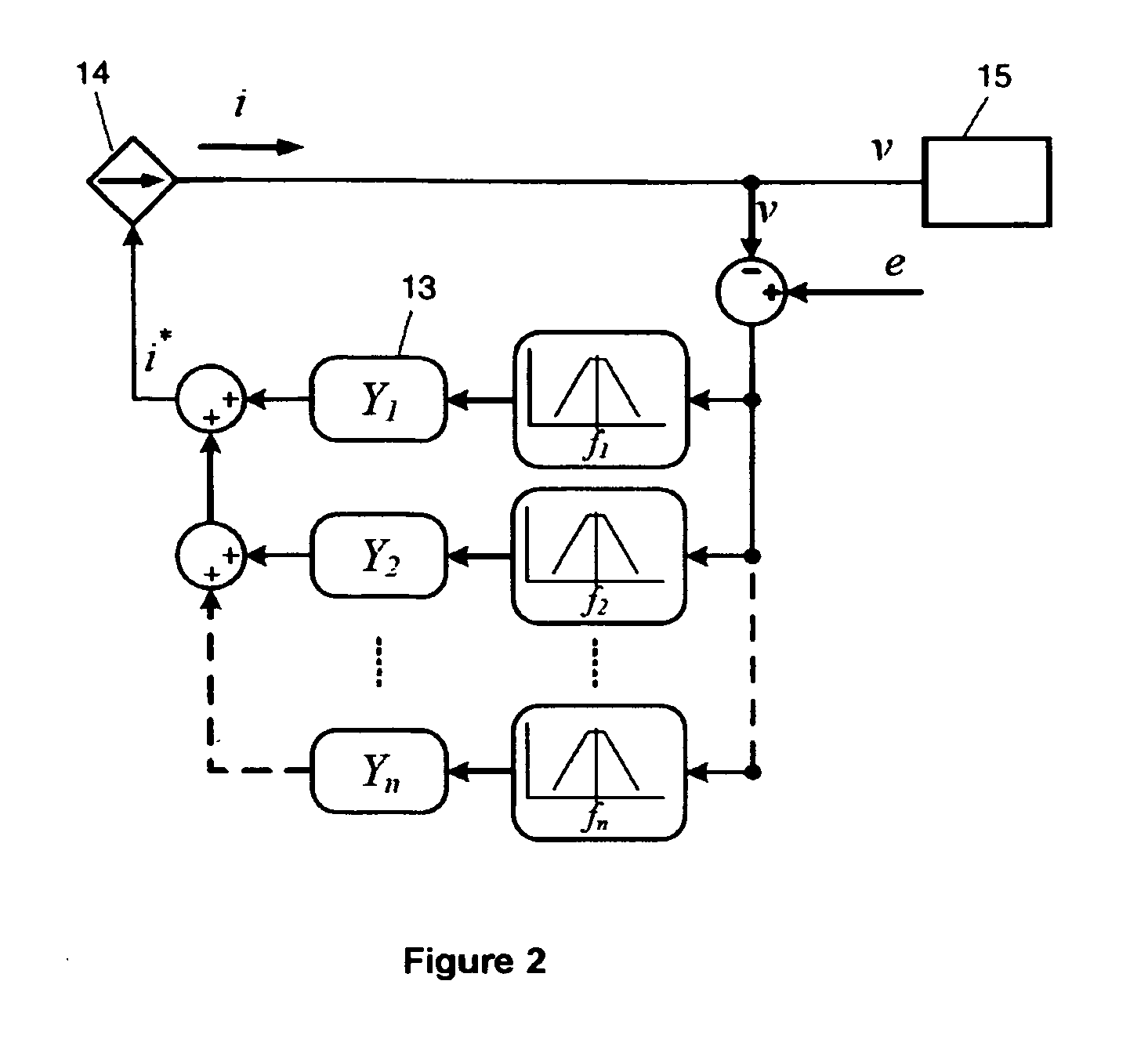 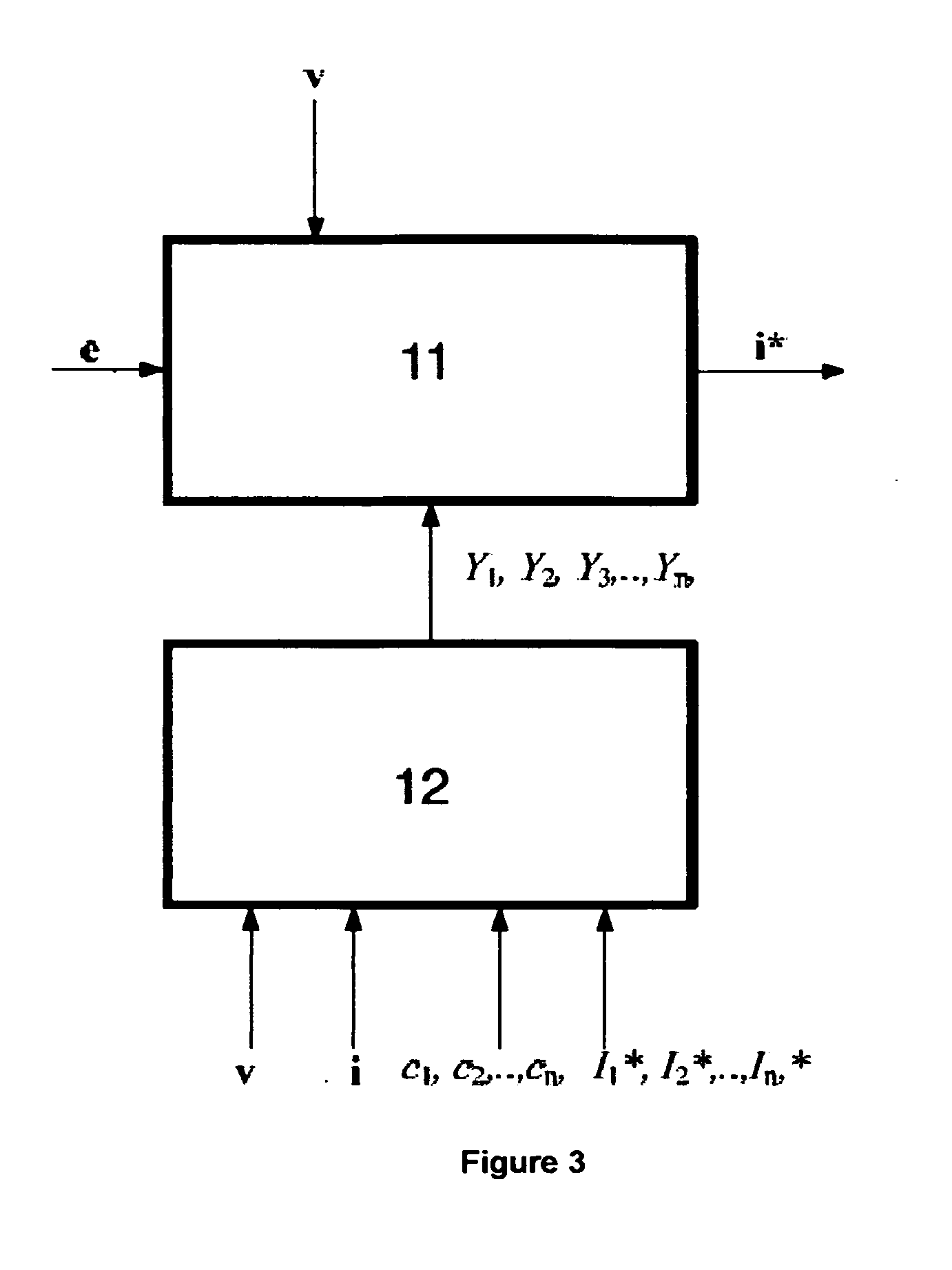 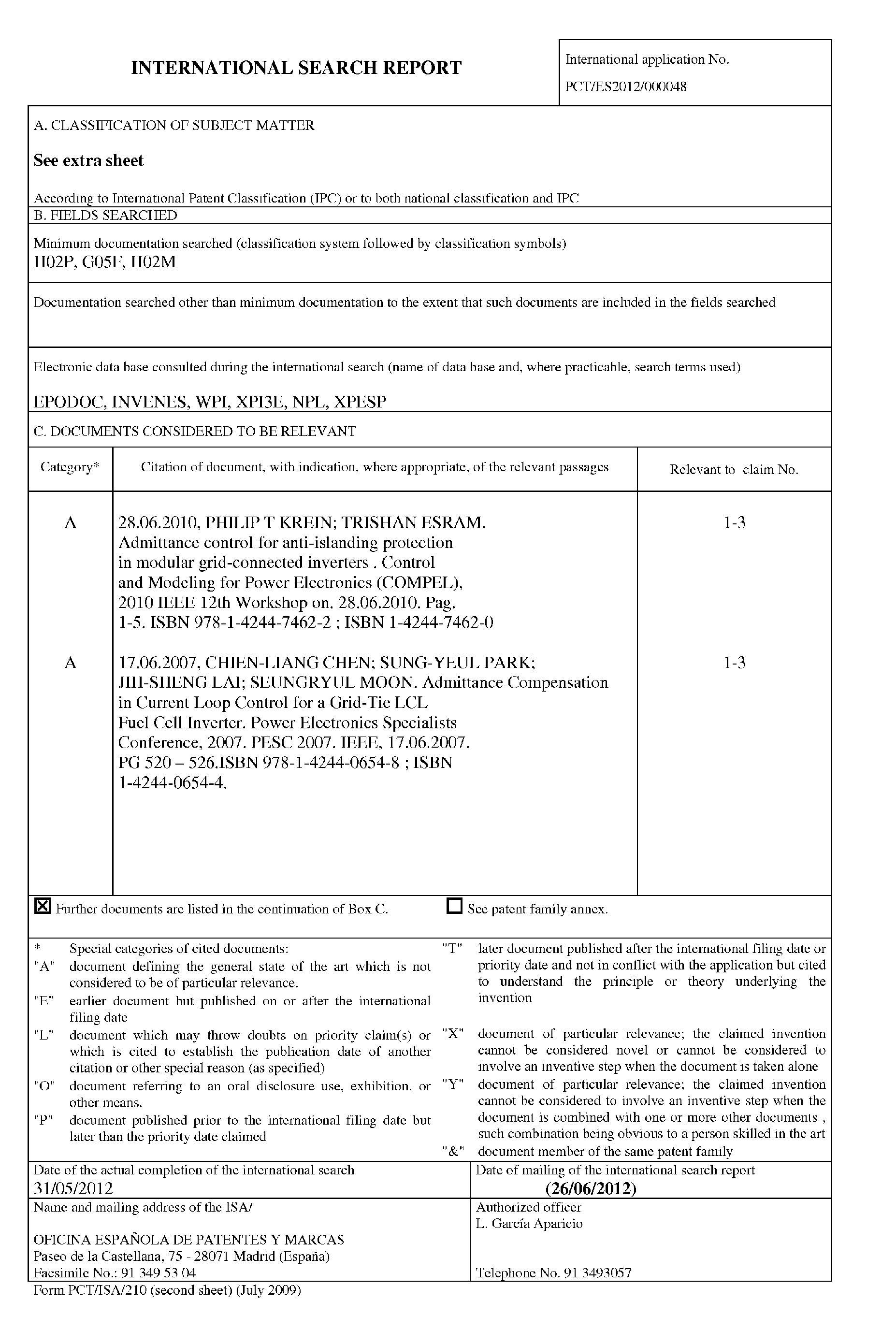 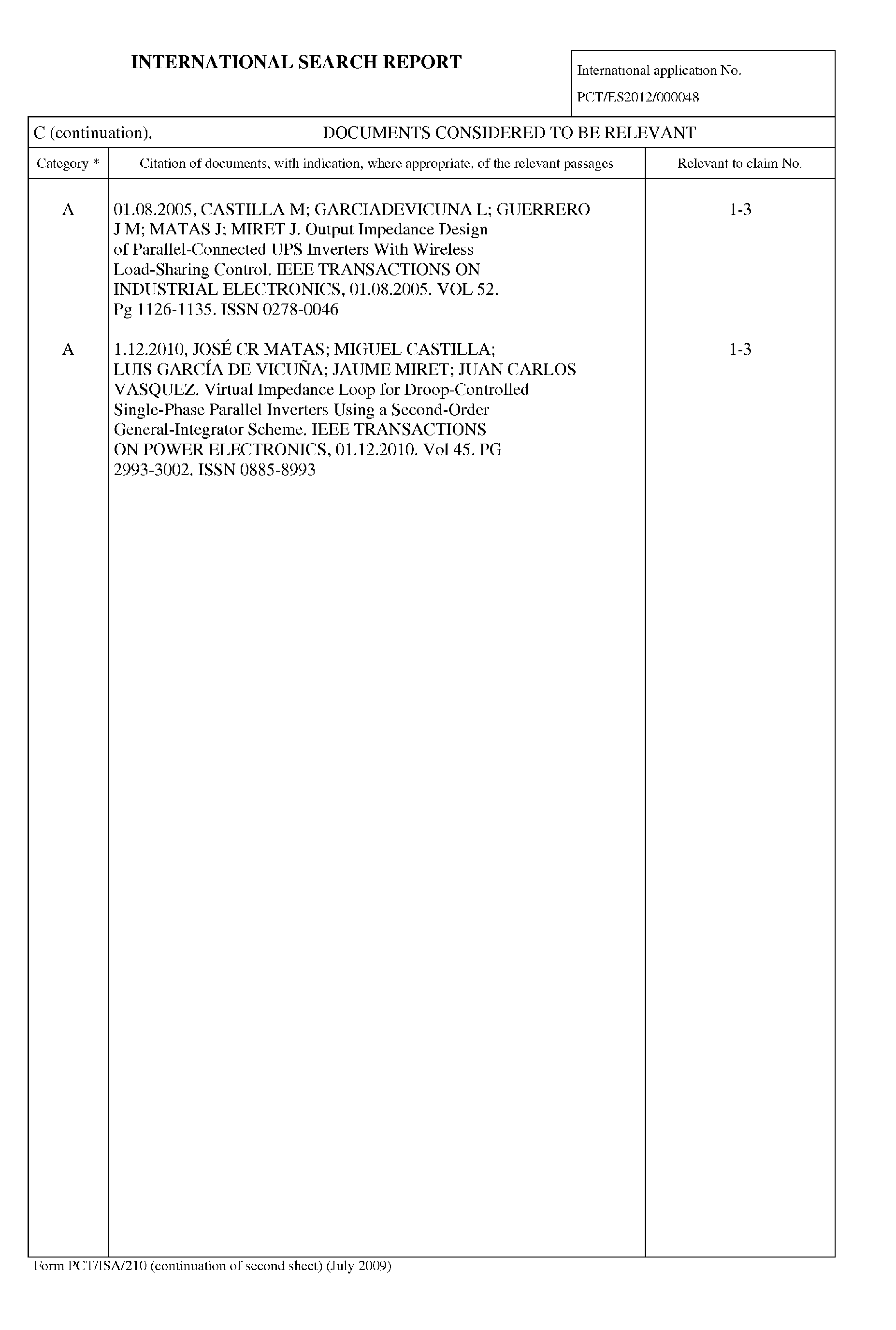 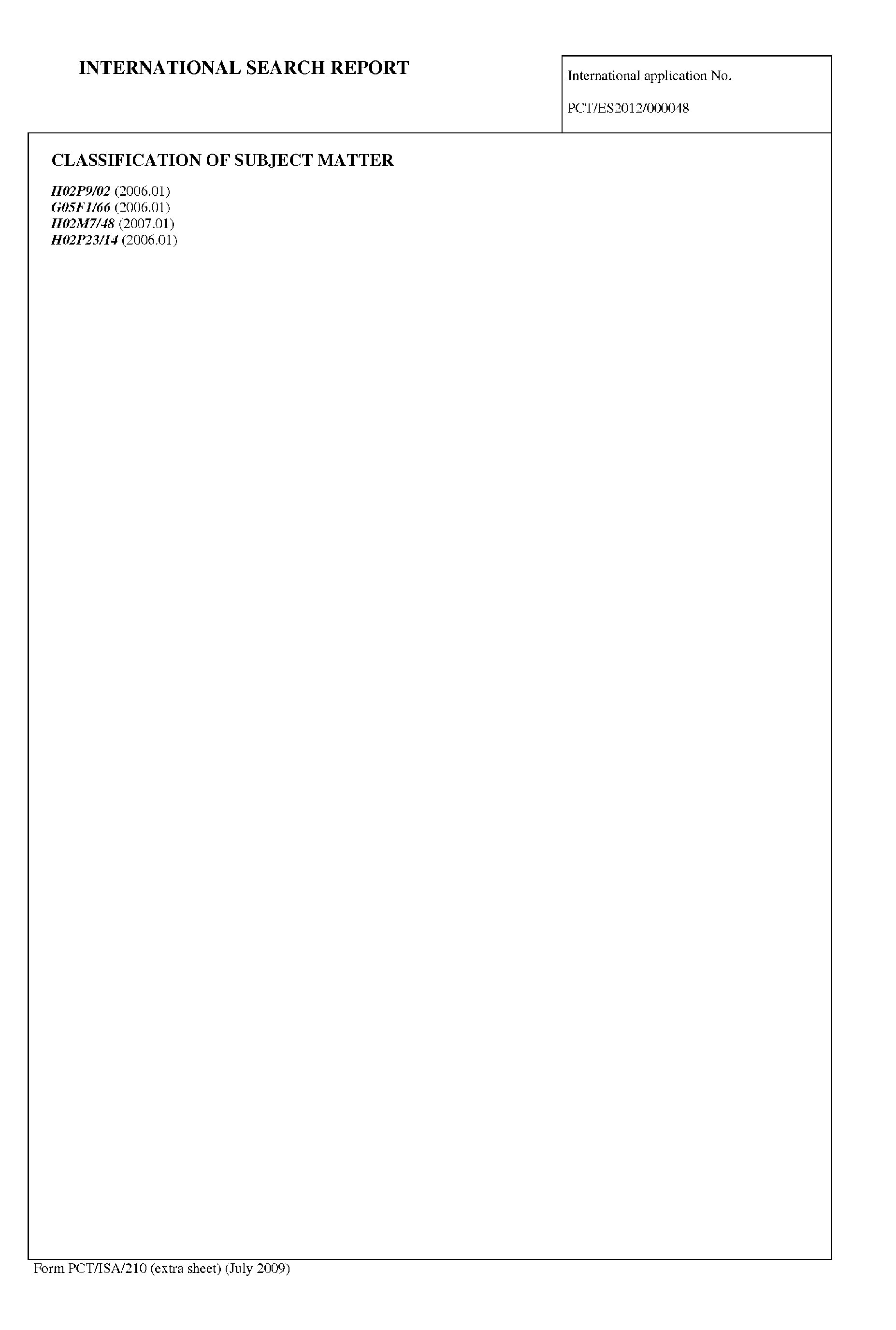