[0001] The present invention relates to a transfer system for setting a piece in a required orientation, according to the preamble of claim 1.

[0002] Automated transfer systems are known that comprise a so-called singulator, i.e., a device that, starting from pieces heaped in bulk, forms an orderly flow of products that are then conveyed at a substantially constant pitch by a belt conveyor towards a subsequent machine or station, where operations of packaging and/or assembly and/or palleting are performed.
[0003] Automated transfer systems of a known type are scarcely satisfactory for pieces having a complex geometry in so far as the pieces set in a row on the belt conveyor have a random orientation in space that in general differs from one piece to the next. In other words, the pieces rest on the belt conveyor on any of their own faces, so that a manual intervention is necessary on the part of an operator in the station of arrival for setting the pieces in the required orientation.
[0004] Said diversity of orientation is found, for example, for pieces of toys or games made of plastic material that are to be inserted as surprises in packages of foodstuff products.
[0005] Furthermore, known transfer systems do not always manage to guarantee high rates of production, do not carry out quality control, and are particularly sensitive to processing waste and also to small variations of shape and dimensions in the pieces to be transferred. Said small variations, for example, can be due to the dimensional tolerances of previous moulding processes and/or to deformations of the plastic material, and are a cause of jamming and stoppages of the transfer systems and/or are a cause of rejects of the pieces.
[0006] In general, the singulator is defined by a vibration device or else by a mechanical device designed specifically for a particular shape of pieces. As the shape changes, the singulator must be replaced completely or must be modified substantially in its mechanical and electrical parts. Said adaptations entail a considerable expenditure in time and in general require a highly specialized labour force.
[0007] The patent No. EP1043642 corresponds to the preamble of Claim 1 and describes a robotized system having an image-processing function, for picking up one piece at a time from a container where the pieces are accumulated randomly in bulk. Said system comprises a robot having a wrist that carries a sensor, for example a photographic machine for capturing images of the pieces. A processor compares the captured image of a piece with a series of models stored for determining what should be the position and orientation of the robot so that the latter picks up the piece correctly.

AIM OF THE INVENTION

[0010] The invention will now be described with reference to the annexed drawings, which illustrate a non-limiting example of embodiment thereof, and in which:

PREFERRED EMBODIMENTS OF THE INVENTION

1. A transfer system for setting a piece in a required orientation, the system comprising:

a) storage means (37) containing data of stored images representing at least one sample element, which is the same as said piece (5) and is set in respective different stable resting positions; and

- the system further comprises a conveyor (25) having a movable horizontal plane (29) for transferring a flow of said pieces;

- the control and command means (31) are configured to control said movement means (32) so as to set said piece (5) in the required orientation, as a function of differences between the position of the piece in the captured image and the required orientation, by controlling the rotations about said first and second axes, during a transfer of said piece, in response to the results of the comparisons of the captured and stored images;

- a housing (2) for containing a heap of pieces in bulk; and 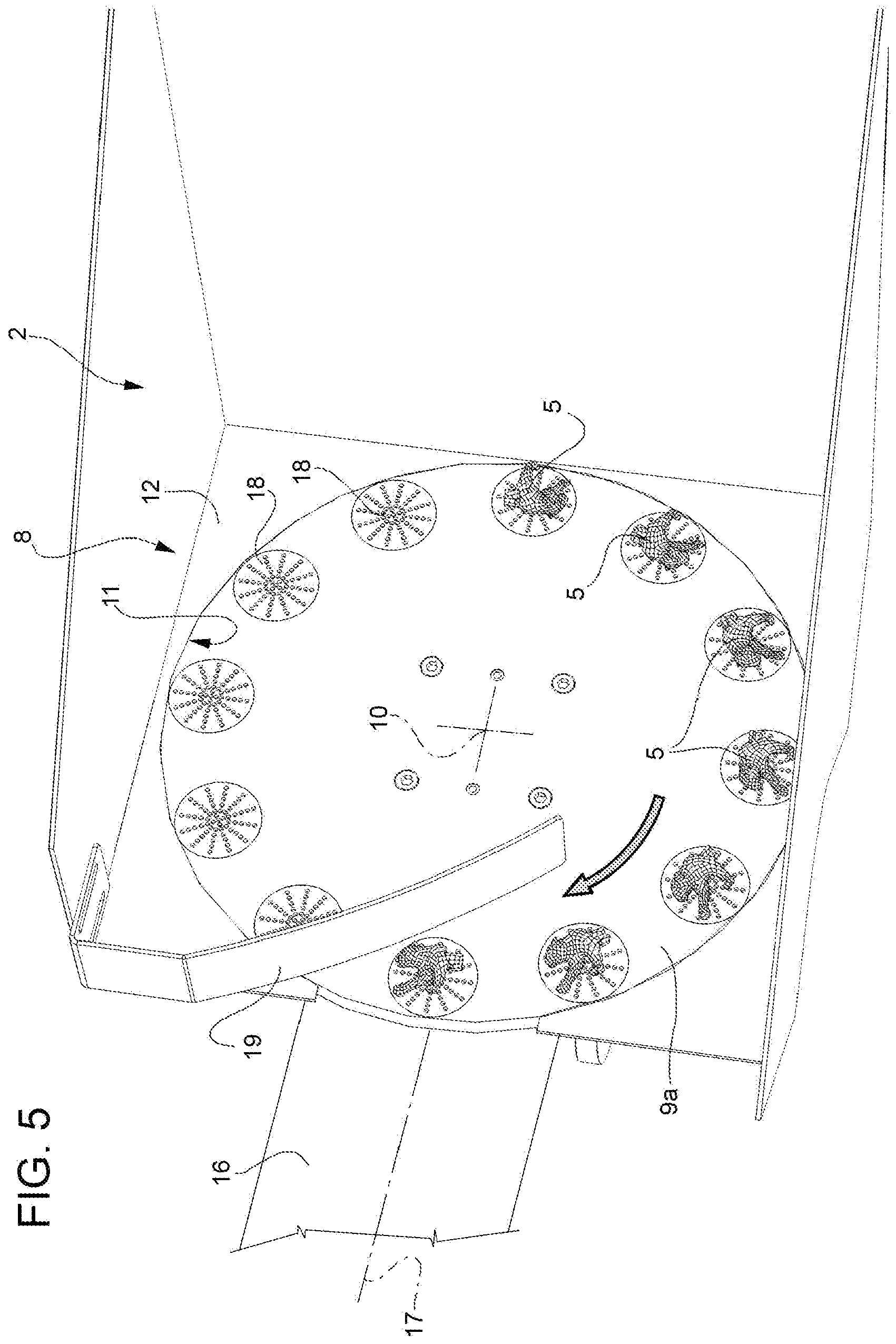 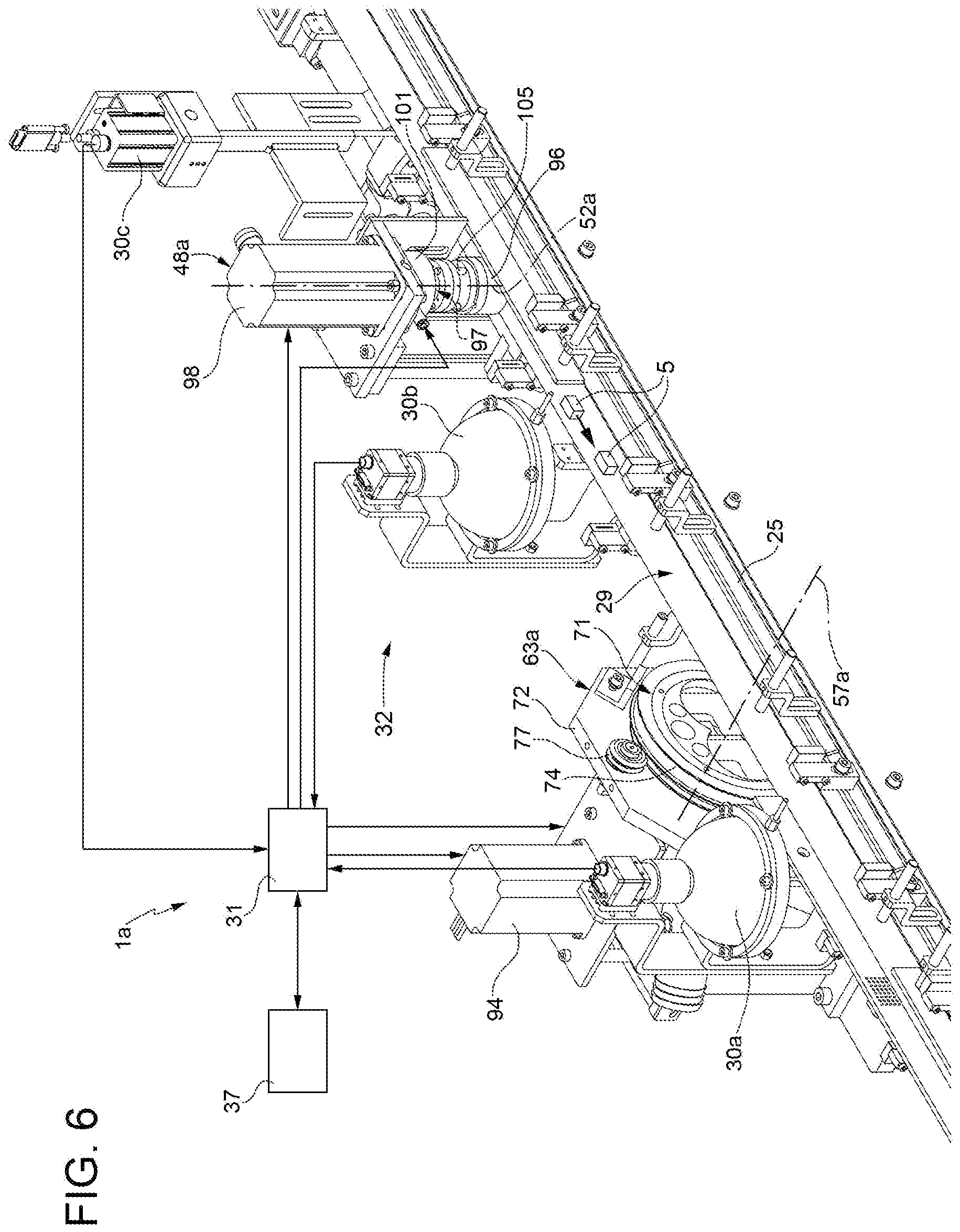 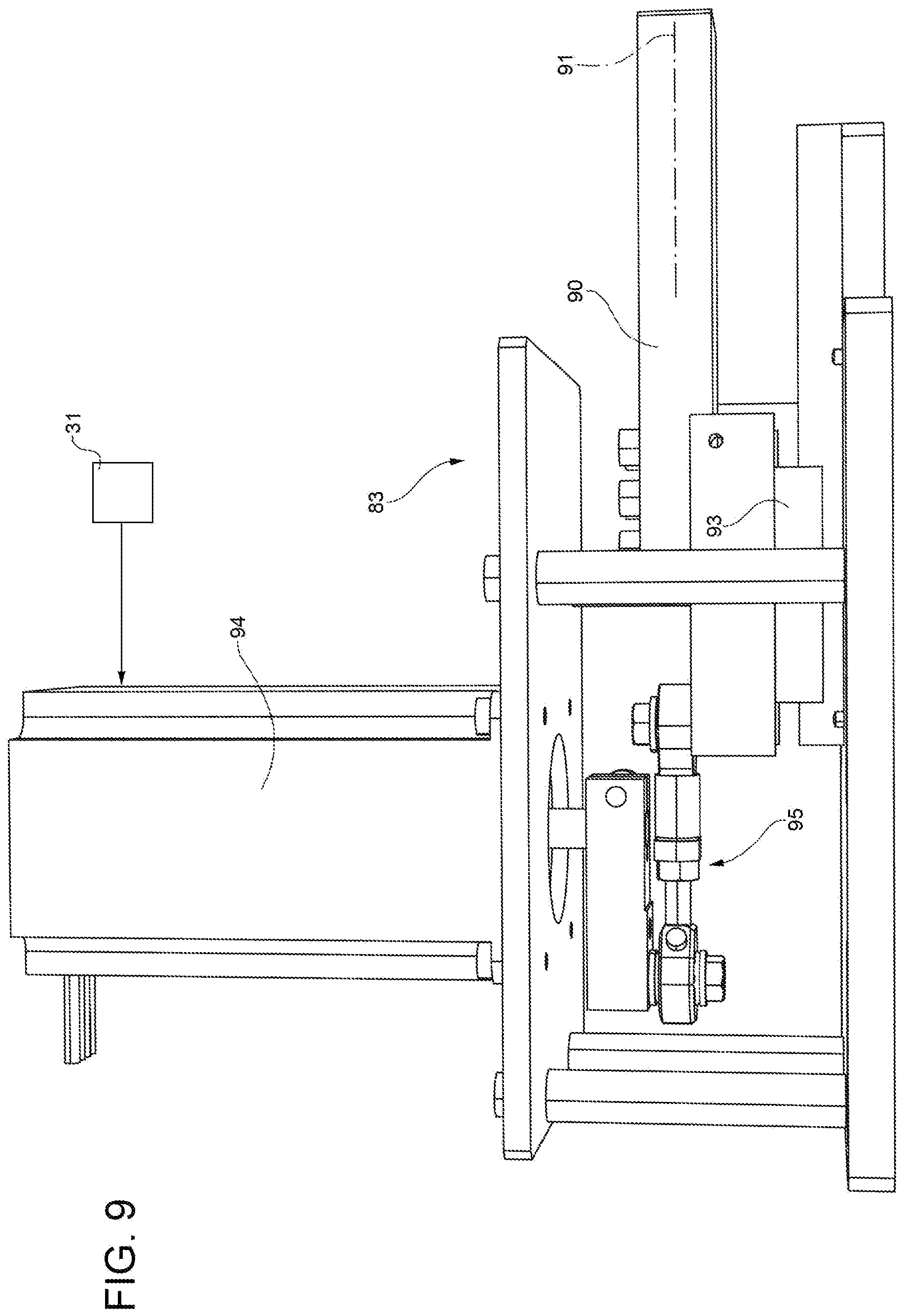