[0001] The invention relates to a device for adjusting height of a prefabricated package box and for closing the box, wherein the box comprises a forehand made goods filling to a certain height and the box comprises a wall, the thickness of which is not less than 2 mm, wherein the device comprises:
[0002] Earlier is known a device according to the preamble above from publication EP 1832413 where the adjustment of the box height is presented according to the height of the goods filling. For adjusting the box height fold line markings, like pressings or scorings round the box are made on the box walls on their both sides at the height defined by the ware filling, after which in the next station the box wall portions of each sides of the box above these height lines are folded as flaps closing the box. The pressing lines are steering the foldings in desired points and are also facilitating the folding.
[0003] The disadvantage for this known solution is that after their foldings the flaps are trying to return back up, and therefore the flaps are needed to keep folded until a cover can be mounted onto the box. In the known solutions the flaps are glued together for securing that they keep folded. If the box wall is made of normal box cardboard, like corrugated board thickness 3 - 4 mm, may the foldings break uncontrolled the folding lines. Also one can meet difficulties when mounting cover, when in the folding line level the folding line of the flap can locate either on the inner or outer surface of the box.
[0004] For eliminating these disadvantages a new device has been developed for adjusting the box height according to the filling volume and a device for closing the box using flaps and cover. Characteristics for the device according to the invention is that the work piece for making folding tracks in the outer surface of the box is cutting work piece, which cuts from the outer surface of the box to an adjusted deep extended cutting lines.
[0005] Advantageous for the invention is that the inner surface of the box stays unbroken. The film of the inner surface in the box functions as a hinge for the folded flaps, the folding does not comprise any binding which would turn the flaps back up. The folding lines of the flaps become accuracy i.e. the flaps will fold according straight lines and locating on correct levels. It is very easy to make outside the box cuttings on adjusted level so, that the inner surface of the wall stays uncut. The filling height of the boxes transported to the device can be automatically detected by means of a scanner device or by means of a mechanical inside the box lowered measuring device, which measures the highest location of the filling in the box and all in this way of their fillings measured boxes can be manufactured so that their heights are minimized for saving space.
[0006] In the following the invention is detailed described by referring to the enclosed drawings where

Fig. 1 presents a prefabricated box when its filling level is measured.

Fig. 2 presents a mounting of inside the box placed supporting device as a side view.

Fig. 3 presents a supporting device in the box seen from top.

Fig. 5 presents a cutting of the folding lines as a side view.

Fig. 6 presents a cutting of the box wall in folding point by means of a rotating disc.

Fig. 7 presents a cutting open of the box horns above the folding line by a knife.

Fig. 8 presents flaps being folded to close the box and mounting of a cover.

[0007] In figure 1 there is measured by means of a scanning device 2, like inclined scanning or distance-meter the highest height level of the goods or filling 4 in the box 1 which comes via a conveyor 3. This obtained measuring result adjusts immediately the steering of a supporting device 5, 6, 7 presented next in the figure 2 to a correct height level when it is lowered inside the box or the measuring result is led to a control unit belonging to the device, in which unit the result is added to data of the box in question, if the box 1 will go further on the conveyor 3 for later proceeded closing function of said box 1. The supporting device 5, 6, 7 is placed inside the box 1 for supporting the walls of the box 1 from inside, when cuttings are made in the outer surface of the box 1 (Figs 4 and 5).
[0008] In figure 3 the supporting device 5, 6, 7 is moved by means of a bar 5 inside the box 1 a little above the goods filling 4. The supporting device comprises counterparts 6 and 7 for each side wall of the box 1, said counterparts being moved against each other when mounted inside the box 1 for facilitating the mounting and they are inside the box 1 brought farther away from each other so, that they support the box 1 walls, as described in figure 4. In the figures 3 and 4 there have been schematically presented an articulated mechanism, by means of which the counterparts 6 and 7 of the supporting device are brought closer and farther away from each other.
[0009] In figure 4 there is shown seen from top a partial cutting of the box 1 wall by means of discs which function as a work piece 8. This example shows discs on each side wall of the box and they are arranged to cut simultaneously their own side wall. It is possible to arrange common driving for the discs by means of a pulling means, which is circulating via all discs or each discs has own driving arrangement producing motion. The discs are freely rotating or rotation motion is arranged for them either separately for each or common rotation motion for all, for example by means of the pulling means 15 (Fig. 6) which circulates via all discs. Very advantageous way to move discs is that each disc will move whole the time on the same wall side and will return until is cutting the next box. For securing that the folding of the flaps will happen successful it will be advantageous that some of the cutting lines L for example two opposite lines are lifted to higher height level, wherein the height difference is the same as thickness of the wall, wherein the folding of the flaps overlapped with each other when closing the box does not cause any disturbance, like for example no force which tries to open flaps or to turn them up does not exists.
[0010] The cutting discs locate in figure 5 on the line L and carry out cutting from outside the box 1 according to the figure 6, wherein the outer surface of the box 1 wall is cut and in this case also a portion from the corrugated board, which locates between the inner and outer surfaces. The cutting is not extended to the inner wall surface. The minimum wall thickness will be at least 2 mm, in order that the cutting blade can be kept inside the wall without damaging the inner surface. It is used in connection with the cutting work piece 8 in the figure 6 presented runners 16, which are pressing the wall from outside against the counter parts 6. Also support rolls can be used. The desired cutting depth can be got then accurately. In figure 6 there is shown also pulling means 15, which circulates via the cutting work pieces 8, wherein the work pieces 8 are moved simultaneously by means of said pulling means.
[0011] The figure 7 shows an example of the cutting open the corners locating above the cutting line 9. It can be done according to the figure 7 by means of a knife blade 10, which is only pushed through the corner. Preferably all corners are cut simultaneously, wherein the box 1 keeps its form. Also different kinds of cutting arrangements and blades are possible, like rotating blades or scissors. The flaps 13, 14 which are got when the corners are cut, are folded to close the box 1 and a cover 11 is placed and glued onto the box 1, the edges of the cover are folded and glued to the wall sides of the box said walls having covered by glue 12.

- a supporting means (5),(6),(7) placeable inside the box (1) and mounted against the box (1) wall and being adjustable of its height position,

- a work piece (8) mounted outside the box (1) said work piece being arranged to make horizontally directed folding tracks in the outer surface of the box (1),

2. A device according to claim 1 characterized in that said device comprises a control unit for adjusting the height level of the horizontally in adjusted deep cutting work piece (8) to be essentially at least the filling height level (L).

3. A device according to claim 1 characterized in that the support device (5, 6, 7) is placed inside the box (1) and adjusted to support the wall of the box (1) on the level of the filling height (L) or close above it.

4. A device according to claim 1 characterized in that there are cutting work pieces (8) one piece per each side of the box (1).

6. A device according to claim 1 characterized in that the cutting work pieces (8) are adjusted to leave the inner surface of the box (1) uncut.

7. A device according to claim 1 characterized in that the cutting work pieces (8) are free rotatable discs, rotated discs or incising knives. 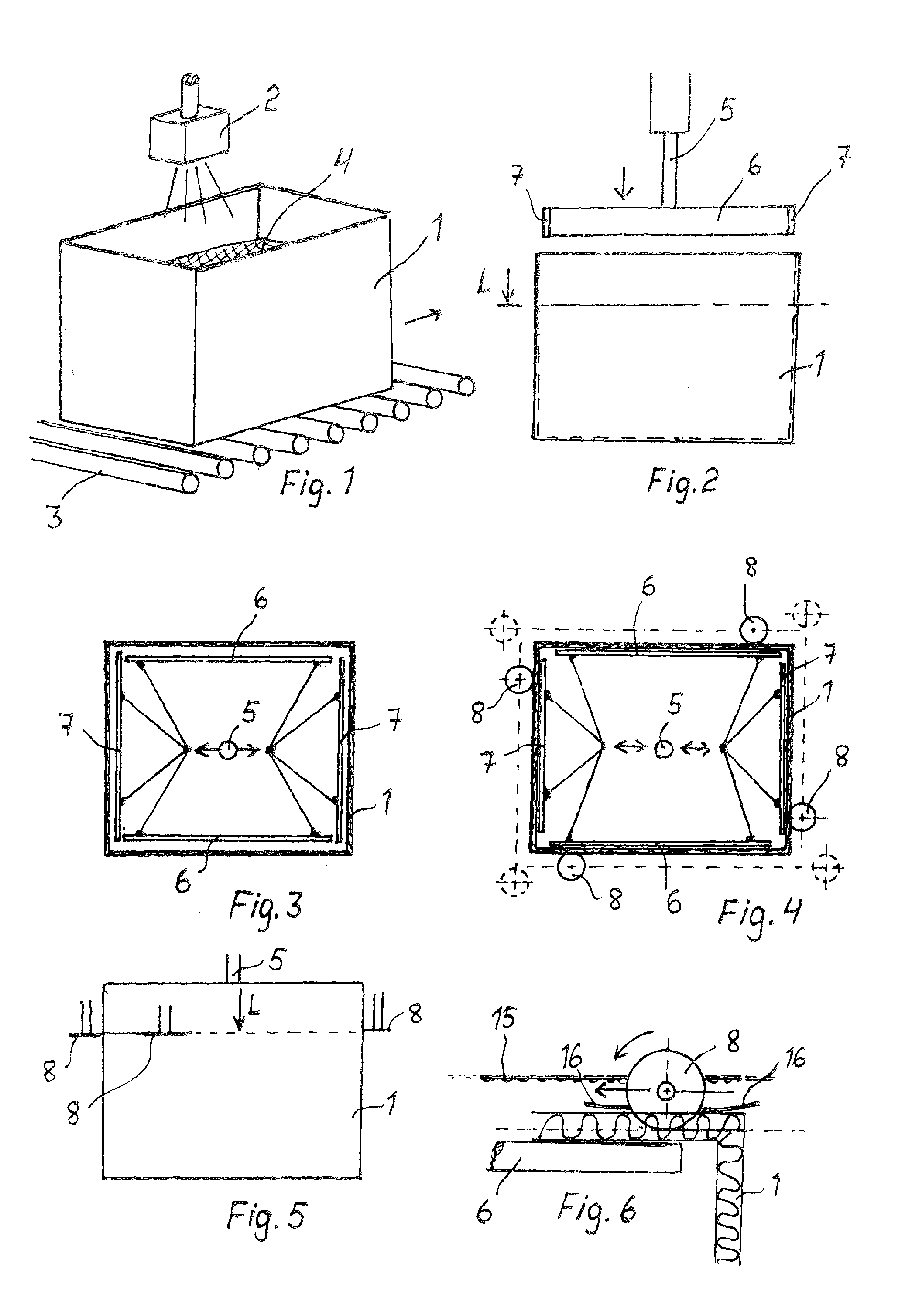 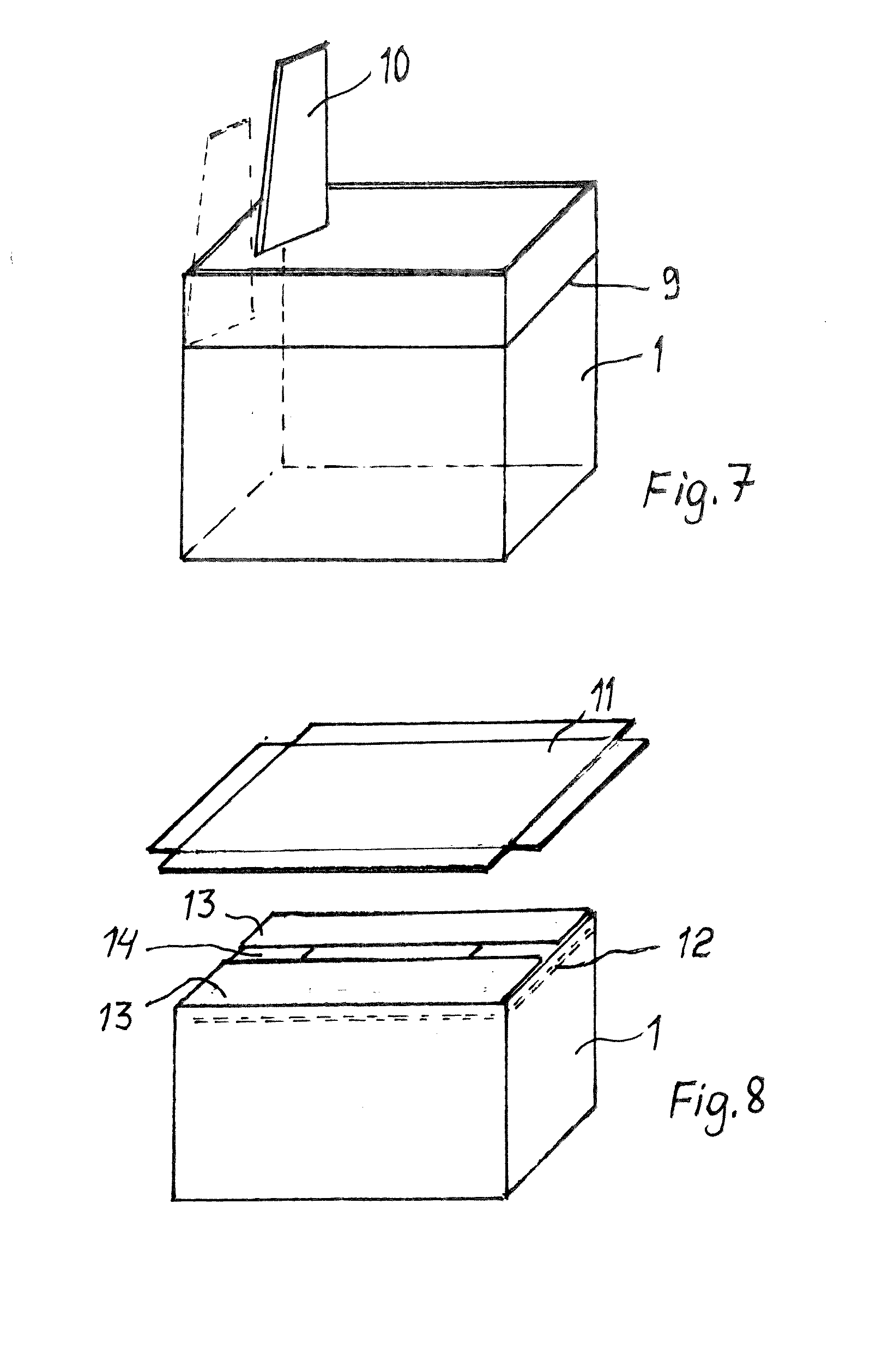 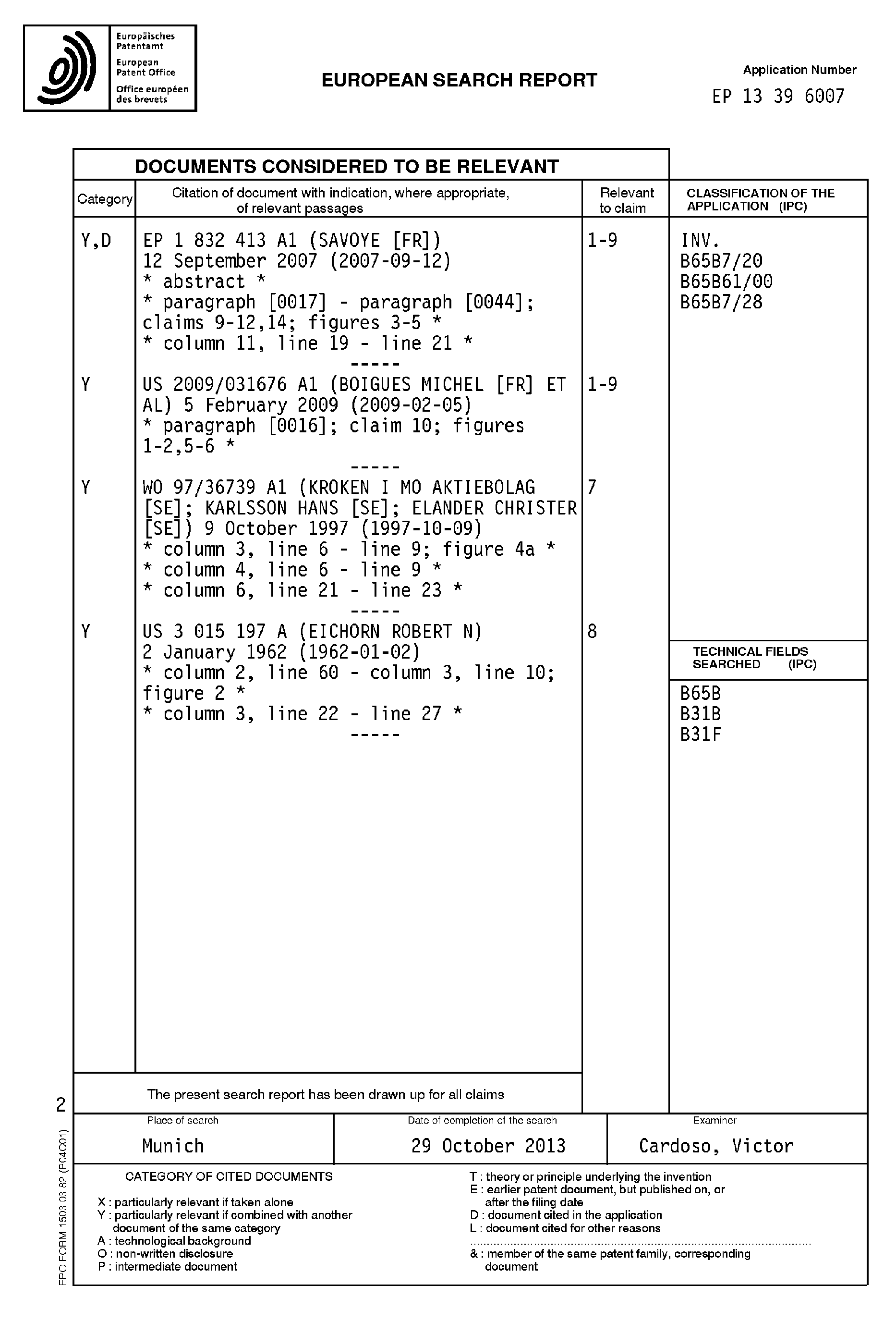 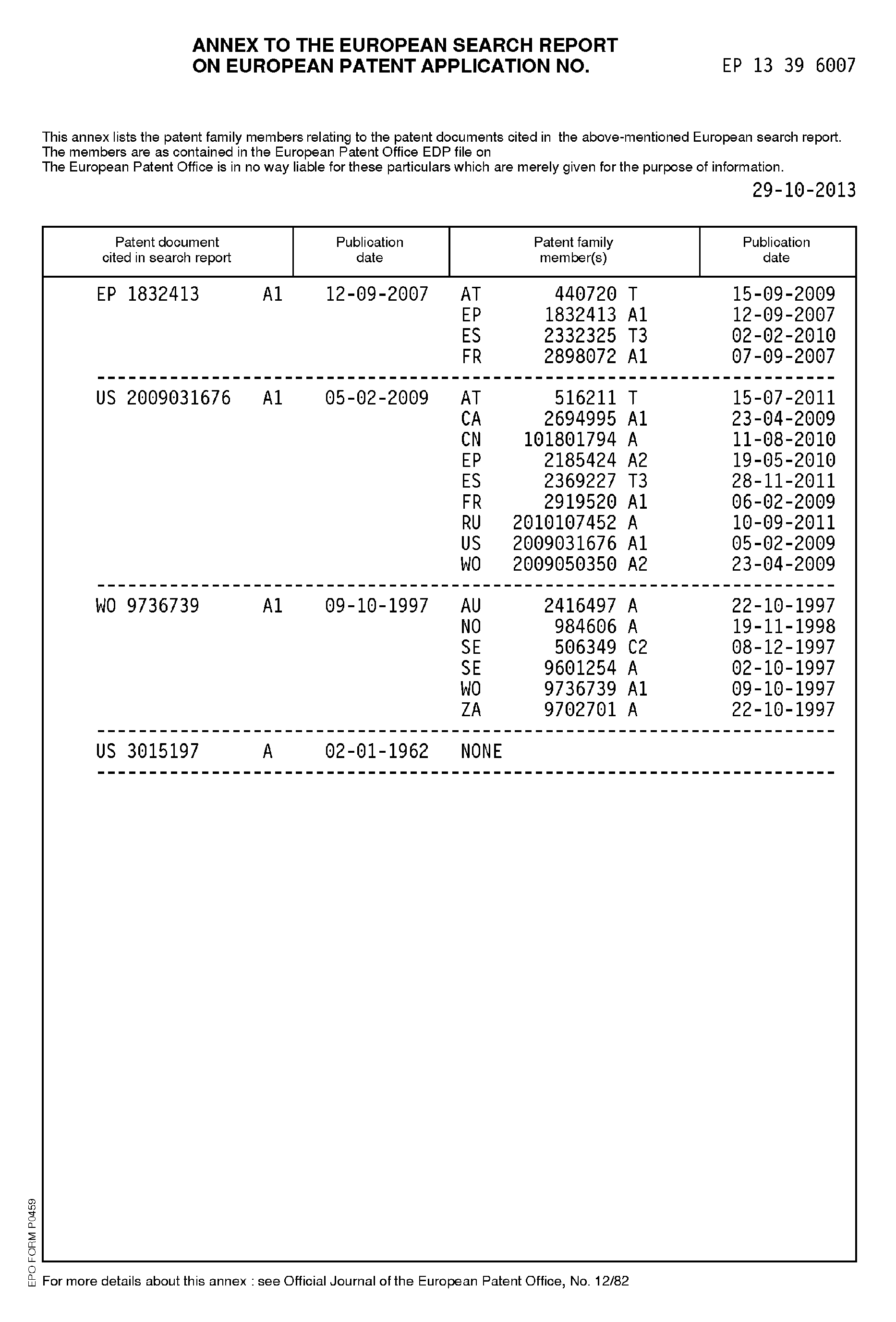