[0001] This disclosure relates to medical image visibility and more particularly to systems and methods for increasing device visibility in medical images.
[0002] Visualization of a catheter or a needle is important in many medical intervention procedures. The present standard for catheter visualization includes X-ray imaging with contrast dyes (fluoroscopy). Such procedures are invasive due to the ionizing radiation and toxicity of the dye itself. Conventional imaging techniques such as ultrasound or magnetic resonance imaging (MRI) are unable to provide clear contrast of catheter materials. Electromagnetic tracking sensors mounted on catheters for use in catheter visualization lack accuracy due to distortion of the electromagnetic field. In addition, accurate catheter visualization is challenging because, in general, catheters are characterized by uncontrollable angle dependent specular reflection.
[0003] Application WO 2009/021064, entitled "Medical Apparatuses Incorporating Dyes," by Wood et al. relates to medical apparatuses incorporating dyes to facilitate proper positioning in patients. However, Wood does not discuss the use of nanomaterials.
[0004] US 5921933 A discloses a medical device for insertion into a human body and having an echogenic portion of enhanced visibility in an ultrasound scan.
[0005] US 6280386 B1 discloses an apparatus and methods for enhancing the visibility of a luminous object inside tissue.
[0006] In accordance with the present principles, a medical system and methods for locating the device include a structure having a length dimension and a surface. A volume is associated with the surface and extends along at least a portion of the length dimension. Nanomaterials are incorporated in the volume and configured to be responsive to at least one excitation signal such that the excitation signal generates a response from the nanomaterials to enable location of the structure within a subject.
[0007] The invention is defined by the independent claims.
[0008] A system for locating a medical device is defined in an independent claim.
[0009] A method for locating a medical device is defined in another independent claim.
[0010] These and other objects, features and advantages of the present disclosure will become apparent from the following detailed description of illustrative embodiments thereof, which is to be read in connection with the accompanying drawings.
[0011] This disclosure will present in detail the following description of preferred embodiments with reference to the following figures wherein:

FIG. 1 is a partial cross-sectional view of a medical device having a solid layer or coating containing nanomaterials in accordance with one embodiment;

FIG. 2 is a partial cross-sectional view of a medical device having a tube forming an annular cavity containing nanomaterials in suspension in accordance with another embodiment;

FIG. 3 is a partial cross-sectional view of a medical device having a longitudinal tube containing nanomaterials in suspension in accordance with another embodiment;

FIG. 4 is a block/flow diagram showing a system for imaging medical devices in accordance with one illustrative embodiment;

FIG. 5 is a block/flow diagram showing a method for locating and imaging medical devices in accordance with another illustrative embodiment; and

FIG. 6 is a block/flow diagram showing another method for constructing and using a medical device in accordance with an illustrative embodiment.

where Eπ is the energy and d is the nanotube diameter.
[0027] Another form of nanomaterials 108 includes nanospheres. Nanospheres may include, for example, gold. The absorption spectra of such materials also depend on the geometry such as the size and aspect ratio, and the behavior of plasmons (oscillations of the free electron gas density). Gold nanospheres with diameters of tens of nanometers exhibit an absorption peak at about 550 nm. With increasing size, the peak optical absorption shifts towards the red end of the visible spectrum.
[0028] For single element metallic nanospheres, a peak absorption wavelength of the metallic nanospheres is weakly dependent on the size with a general trend towards red shift with increasing size. For example, with gold nanospheres of size 22 and 99 nm, the peak absorption wavelengths are 520 nm and 575 nm, respectively.
[0029] Another stronger factor that determines the absorption peak of spherical nanoparticles is the addition of another metal to form an alloy. The peak absorption spectra of gold-silver alloy nanoparticles blue-shifts (decreases in wavelength) with decreasing gold mole fraction. For example, the peak spectra occurs at about 400 nm when the gold mole fraction is close to zero, increases to 450 nm for a mole fraction of 0.5 and further increases to 500 nm for a mole fraction of 0.80. Thus, nanopsheres can be tailored by their size and alloying to produce specific peak absorption spectra.
[0030] For alloyed nanospheres, alloy formation can be used to obtain a wider variety in the choice for a given peak wavelength. The following equation can be used to determine peak wavelength for an 18 nm gold-silver alloy nanosphere: λmax = 130χAu + 390 where λmax is the peak absorption wavelength in nm and χAu is the mole fraction of gold.
[0031] Another form of nanomaterials 108 includes nanorods. In contrast to nanospheres, the wavelength of peak absorption of, e.g., gold nanorods (i.e., cylindrical gold nanoparticles) depends only weakly on their diameter, instead increasing strongly with their aspect ratio. For example gold nanorods with mean aspect ratios of 5.9 and 3.7 exhibit peak optical absorptions at 1000 and 785 nm, respectively.
[0032] For example, for single element metallic nanorods, gold may be selected as an exemplary material due to its biological compatibility. The peak absorption wavelength of metallic nanorods may be given by the following equation:

1. A system for locating a medical device, comprising:

a sensor (408) configured to receive the imageable responses; and

providing a medical device (100) comprising a structure having a length dimension and a surface (102), a volume (106) associated with the surface and extending along at least a portion of the length dimension;

processing (514) the imageable responses to locate the medical device in relation to a medical image. 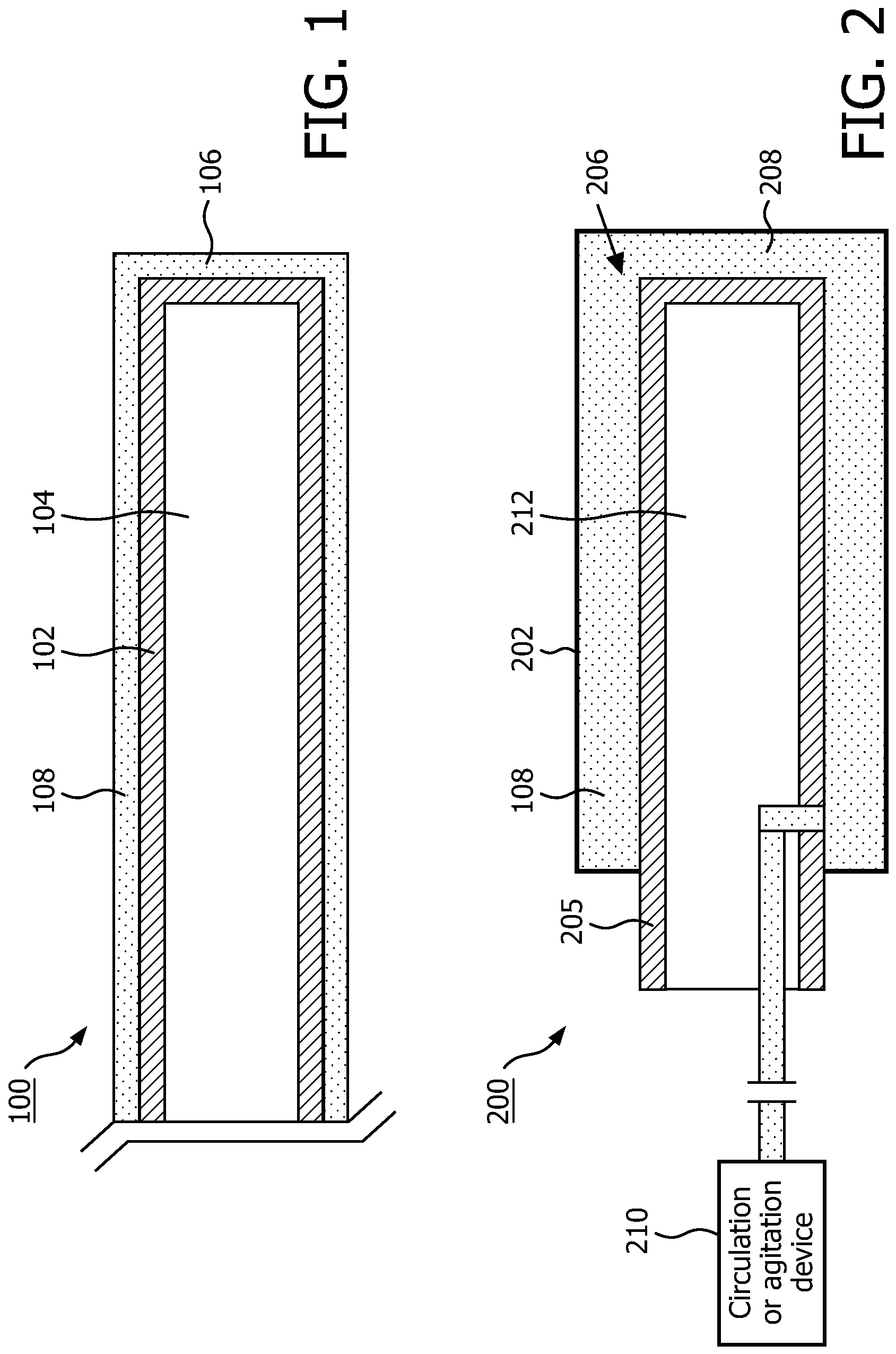 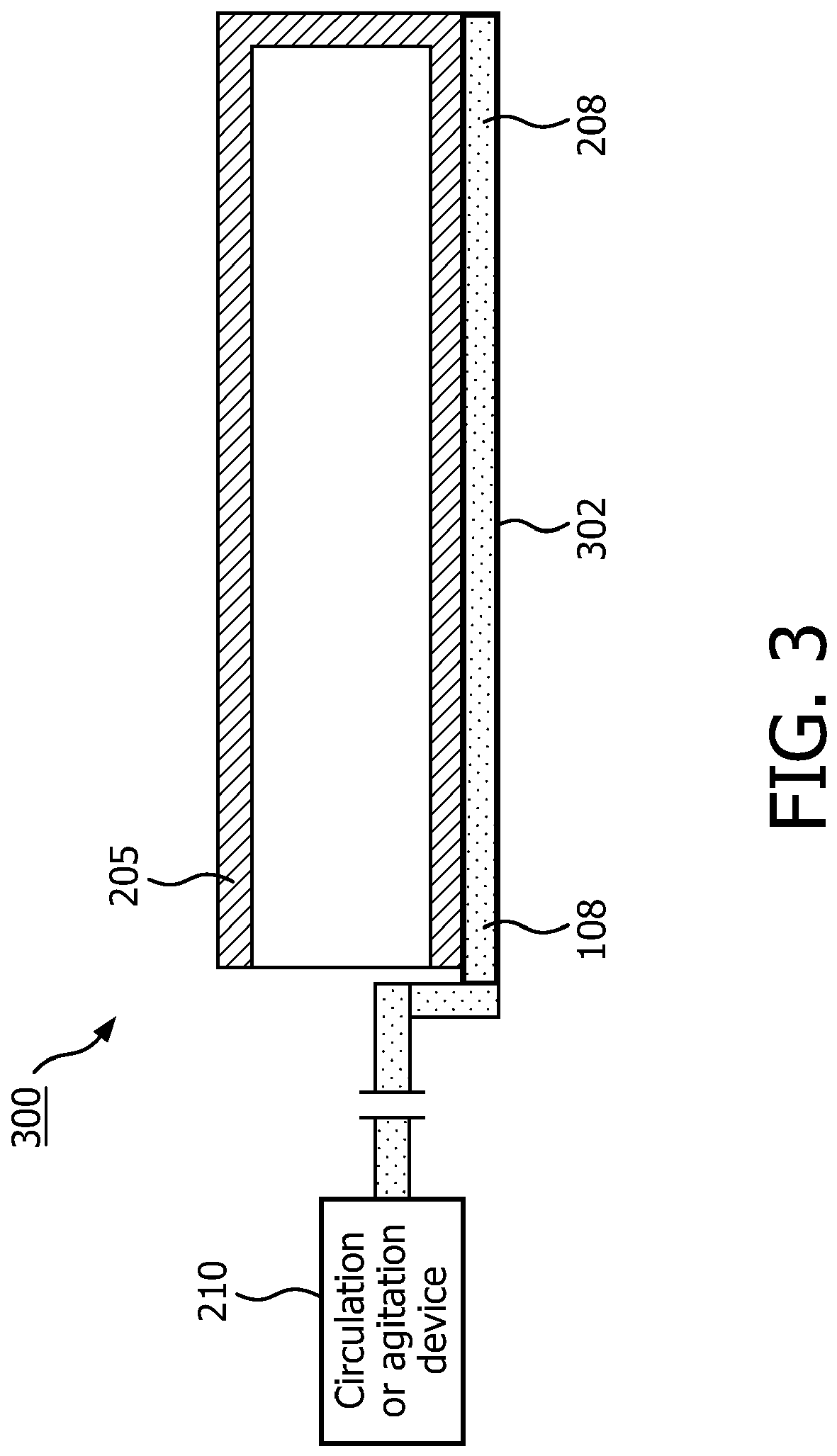 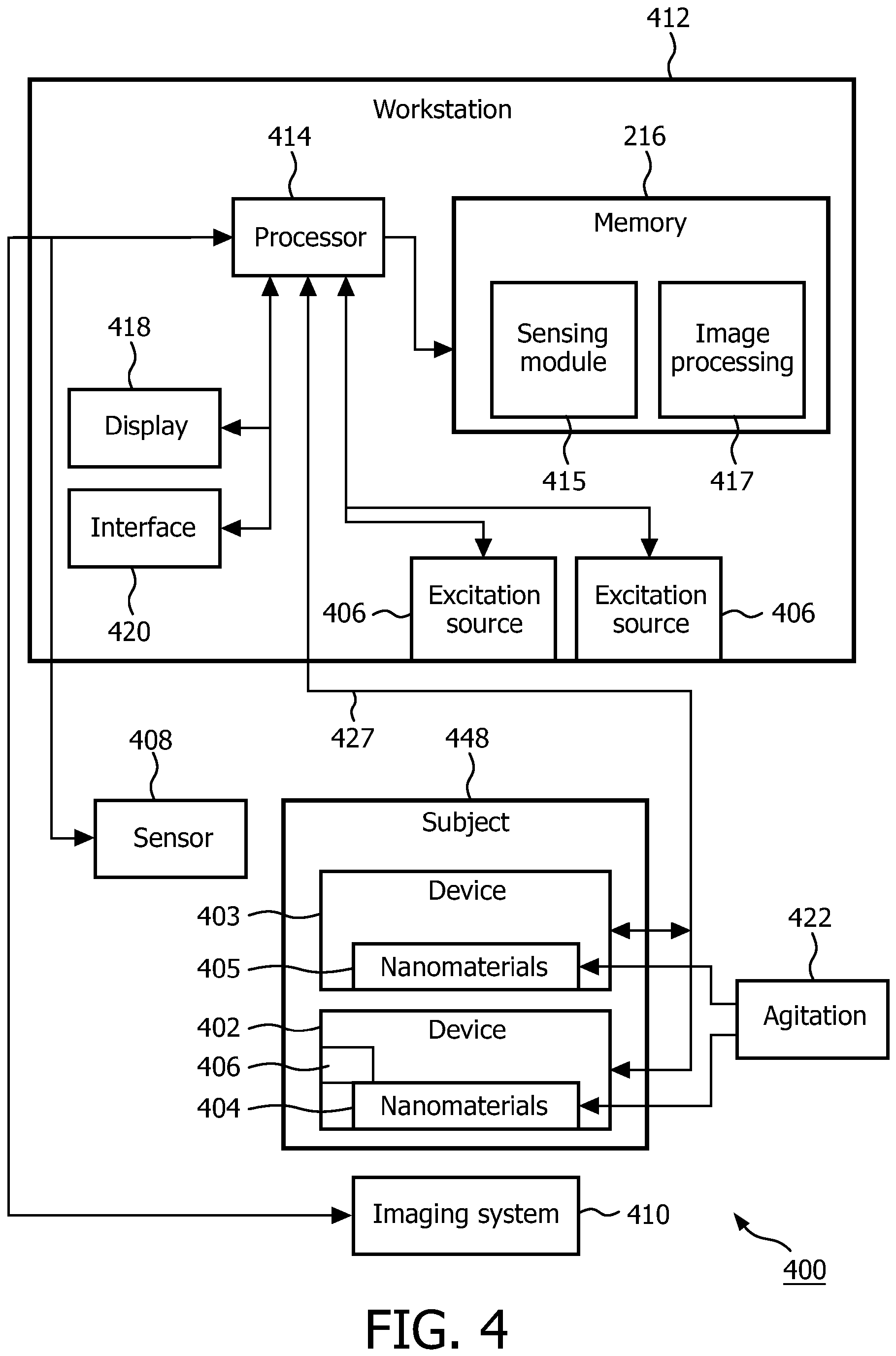 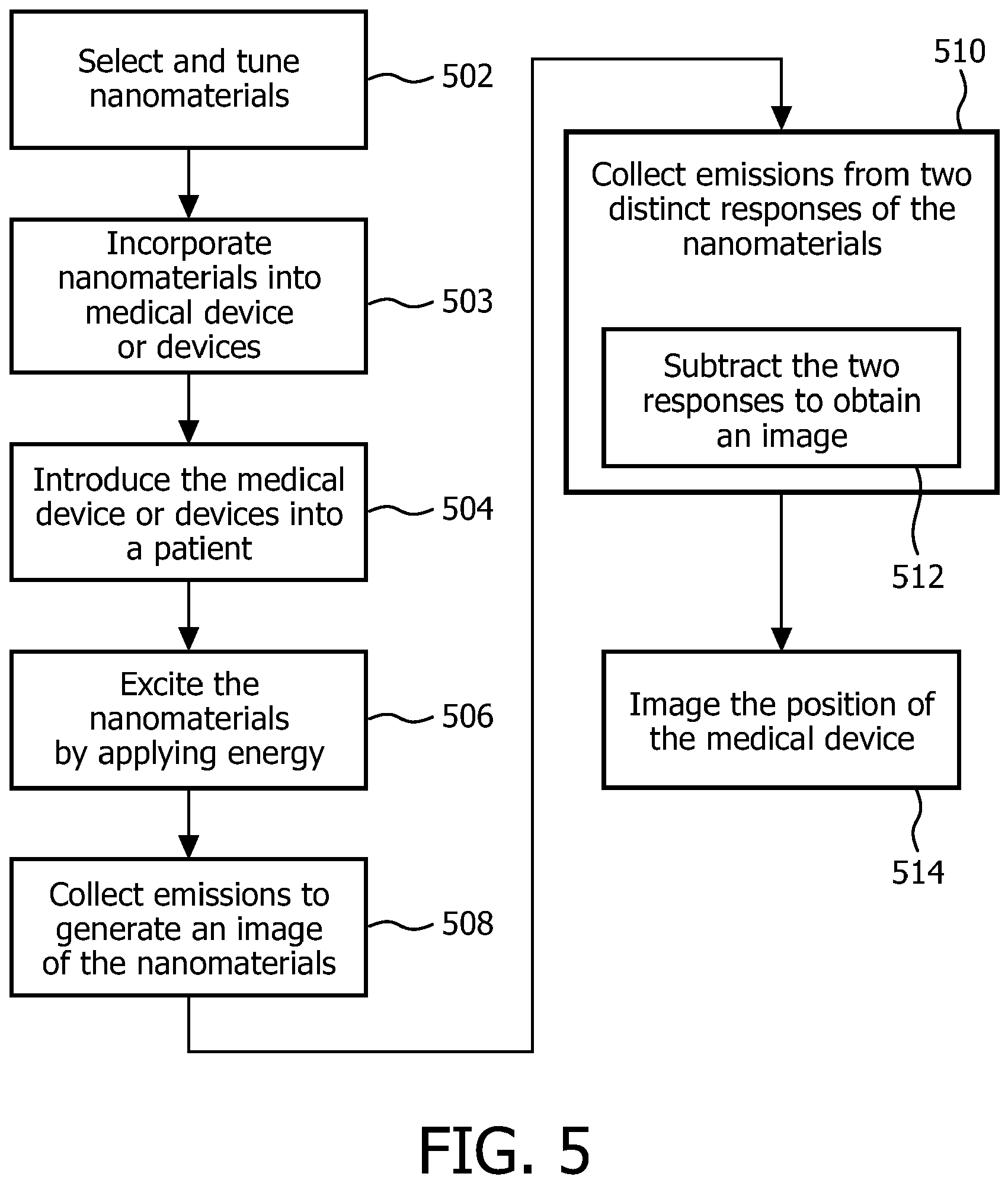 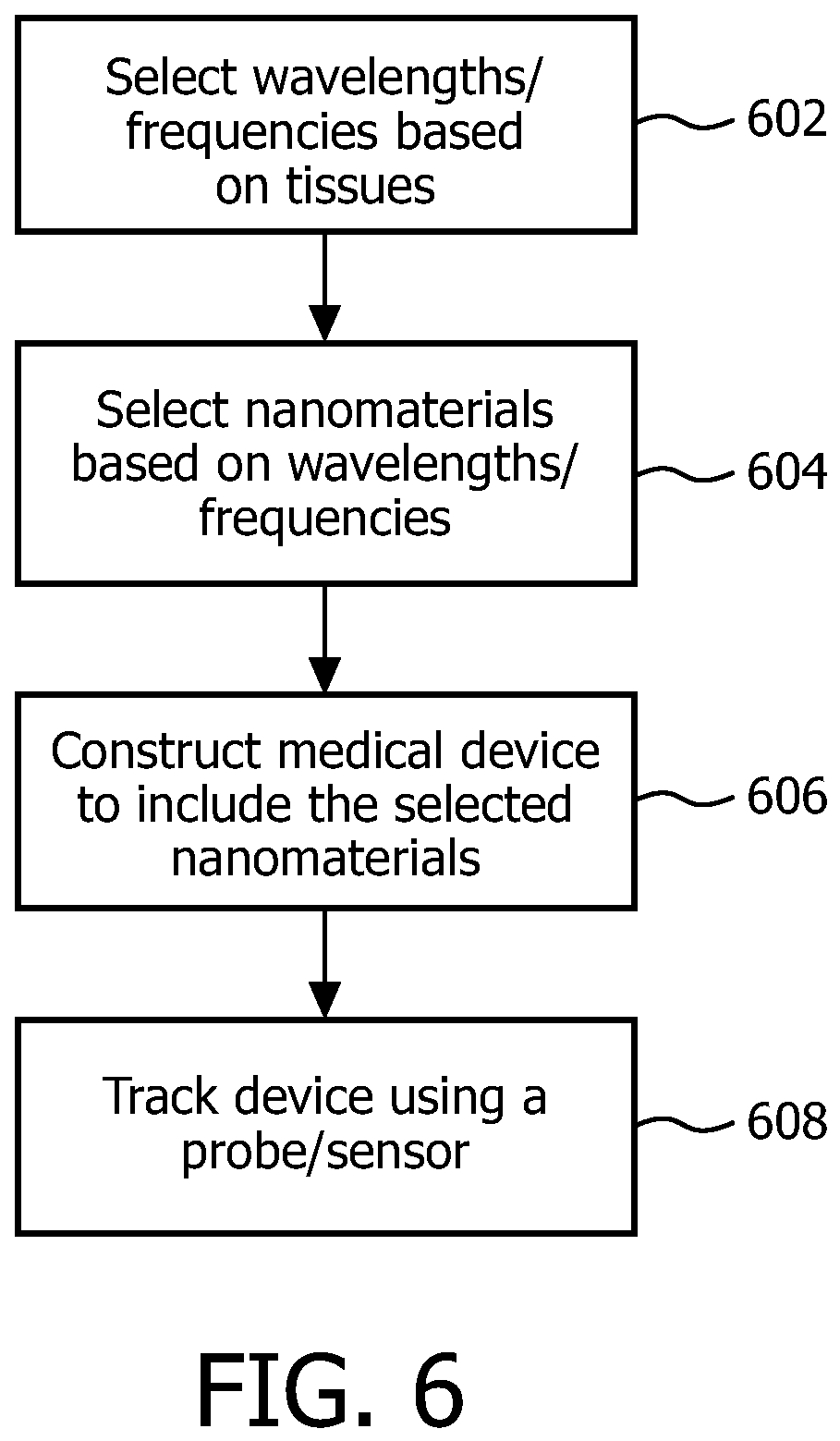