[0002] Exhaled breath is commonly used in alcohol testing and today's technology makes it possible to perform on-site breath testing with legally defensible results using infrared spectroscopy.
[0003] Testing DNA and testing for drugs, whether abused or used therapeutically, generally requires the taking of blood or urine samples for testing. Hair, sweat, and oral fluid can also used for drug and DNA testing. Blood sampling is invasive and requires medically trained personnel, and the test subject is often transported to a hospital or other specialized facility for sampling. These procedures are time and effort consuming. The collection of urine samples may also be considered intruding on personal integrity. Other problematic issues related to samples and specimens taken from a subject include risk of disease transmission or infection and the risk of the subject exchanging samples or using a clean sample from another subject to avoid detection of illicit drugs.
[0004] The need to provide a non-invasive, not-specimen based apparatus, system and/or method for detecting the presence (i.e. qualitative) or determining the quantitative amount of a substance in a subject is at least partially met by the invention disclosed in PCT Application No. PCT/EP2012/054180, the contents of which are incorporated herein by reference for all purposes. PCT/EP2012/054180 discloses an apparatus, system and method for sampling the exhaled breath of a subject for a drug substance and/or a biomarker. Aerosols from the lungs of the subject are collected on a sampling membrane and then analyzed for the presence and optionally the amount of one or more nonvolatile compounds. The present invention provides a method for eluting nonvolatile compounds from a sampling membrane in such a way that the eluted compounds are easily assayed. The present method improves the yield and consistency of recovery of nonvolatile compounds from sampling membranes used to collect aerosols from exhaled breath.

[0005] Accordingly, embodiments of the present invention preferably seek to mitigate, alleviate or eliminate one or more deficiencies, disadvantages or issues in the art, such as the above-identified, singly or in any combination by providing a method, according to the appended patent claims.
[0006] According to one aspect of the invention, a method for recovery is provided for collecting nonvolatile compounds from a sample taken from the exhaled breath of a subject for further analysis. The method may comprise removing a sampling membrane from a housing of a breath sampling device. Alternatively, the sampling membrane may be in place in a housing of a breath sampling device. Nonvolatile compounds may be eluted by passing a polar solvent through an inlet and an outlet in an adapted housing. By leaving the sampling membrane in place and eluting through the housing lowers the risk of contamination of the membrane. It also provides a more convenient and fast way of handling a collected breath sample.
[0007] A sampling membrane comprising collected from exhaled breath and aerosols containing nonvolatile compounds of interest is eluted by passing a polar organic solvent through the membrane using gravity alone or under pressure or centrifugal force.
[0008] In some examples of the invention, the sampling membrane is a filter membrane, preferably an electrostatic filter membrane, and most preferably an electrostatic membrane comprising nonwoven acrylic and polyethylene fibers.
[0009] The sampling membrane may be a filter membrane comprising at least one layer of non-woven filtration media with a specific weight in the range of 23 g/m3 to 500g/m3, preferably in the range of 150 up to 300 g/m3, and even more preferably in the range of 200 up to 280 g/m3 and may comprise at least one further layer that is a spunbonded carrier with a scrim weight of 10 to 20 g/m3.
[0010] The polar solvents suitable for use in the method are miscible in water, are capable of dissolving water soluble and lipid soluble components of the exhaled aerosol, and are capable of eluting the nonvolatile compounds of interest. Polar solvents meeting these criteria include methanol, acetonitrile, isopropanol, and acetone.
[0011] The nonvolatile compounds of interest may originate from blood by a mechanism of producing a gas phase in the alveoli or from other parts of the airways and are transferred from the lungs carried by an aerosol. The nonvolatile compounds may be medical drugs, drugs of abuse, metabolites of drugs, markers indicative of drug use, or naturally occurring markers of disease states or metabolic conditions of subjects. Analysis of nonvolatile compounds from sample membranes may include mass-spectroscopy (MS) and Surface Enhanced Raman Spectroscopy (SERS) and other sensitive analytical methods known in the art.
[0012] In some examples of the invention, the aerosol on the sampling membrane may contain nonvolatile compounds of at least one drug substance in the exhaled breath. Nonlimiting examples of drug substances include amphetamines, ecstasy, Cannabis, THC, cannabinoids, opiates, heroin, morphine, 6-AM, cocaine, benzodiazepines, Propoxyphene, Methadone, Buprenorphine, Tramadol, LSD, Designer/Internet drugs, Kathinon, GHB, Meprobamat, Z-drugs, tryptamines, and anabolic steroids.
[0013] MS and SERS are the preferred analyzing methods with liquid chromatography /MS (LC/MS) being preferred over gas chromatography/MS (GC/MS).
[0014] Further examples of the invention are defined in the dependent claims, wherein features for the second and subsequent aspects of the invention are as for the first aspect mutatis mutandis.
[0015] Some known nonvolatile biomarker that may be transported by aerosols in exhaled breath is comprised in the list comprising lipids, peptides, nucleotides, prostanoids, proteins, DNA or RNA. These biomarkers may be used for diagnosis of diseases or illnesses, such as cancer (such as lung cancer), asthma, inflammation, infection (such as tuberculosis) and/or oxidative stress or other medical conditions.
[0016] The term "comprises/comprising" when used in this specification is taken to specify the presence of stated features, integers, steps or components but does not preclude the presence or addition of one or more other features, integers, steps, components or groups thereof.

[0017] These and other aspects, features and advantages of which examples of the invention are capable of will be apparent and elucidated from the following description of examples of the present invention, reference being made to the accompanying drawings, in which

Fig. 1 is a schematic illustration illustrating an example of a portable device configured to collect a sample from exhaled breath of a subject;

Fig. 2 is a flow-chart illustrating a method for using a portable device configured to collect a sample from exhaled breath of a subject;

Fig. 3 is a flow chart of method steps for a recovery method according to the invention; and

Fig. 4 illustrates a system for detecting the presence or determining the quantitative amount of at least one drug compound in exhaled breath.

1. A method for recover non-volatile compounds from a filter membrane, comprising:

washing said filter membrane with a polar organic solvent to form an eluate; and 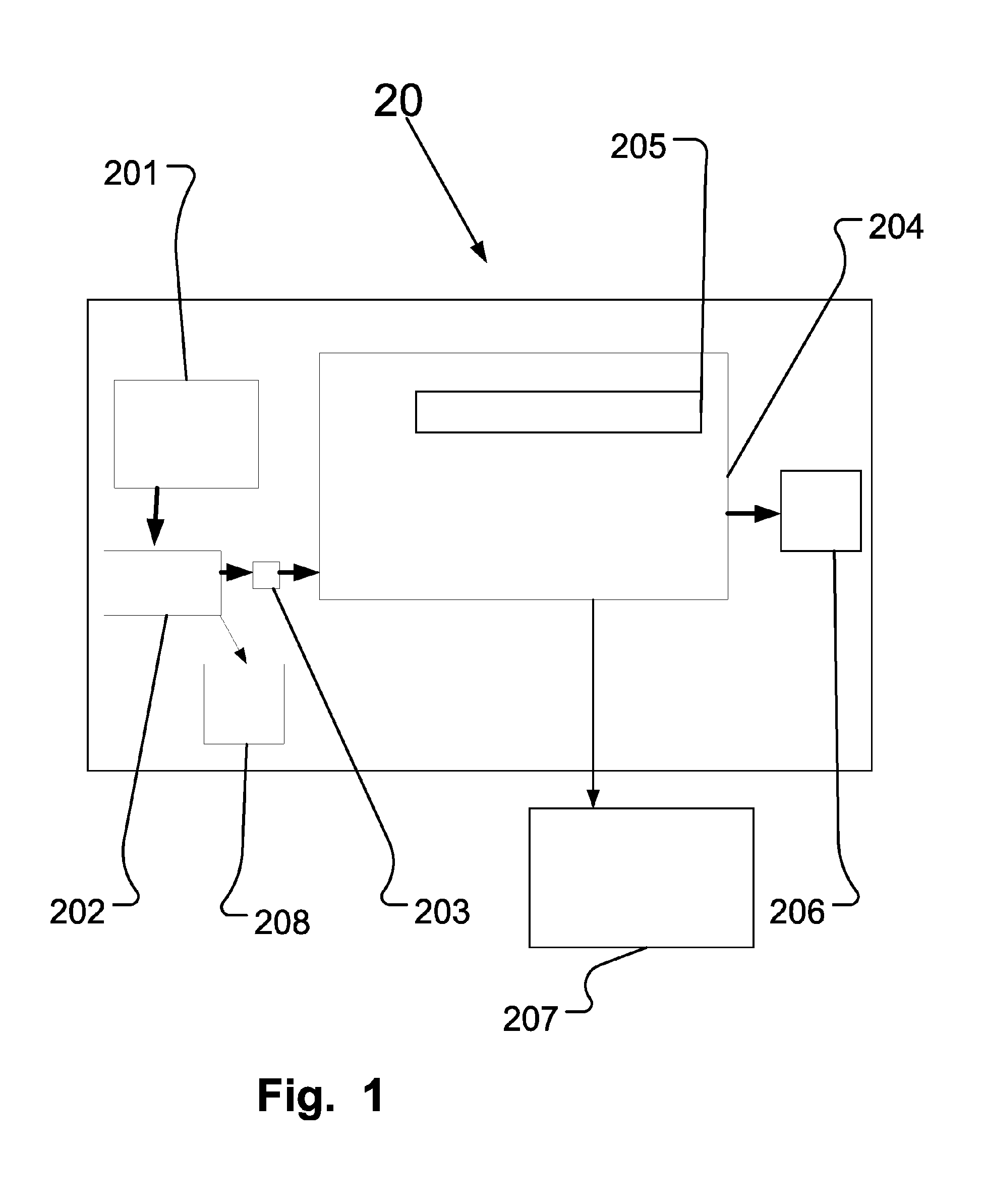 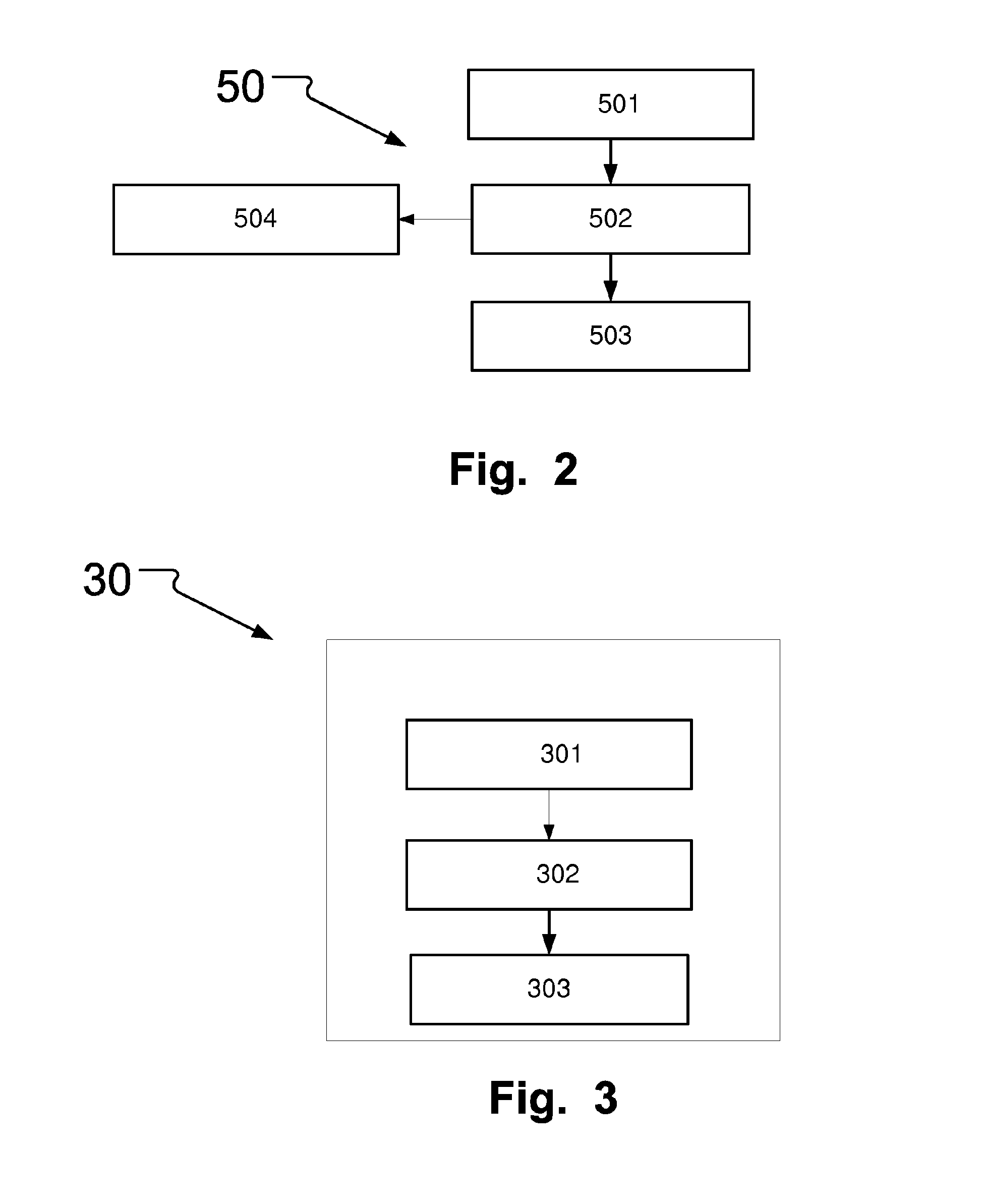 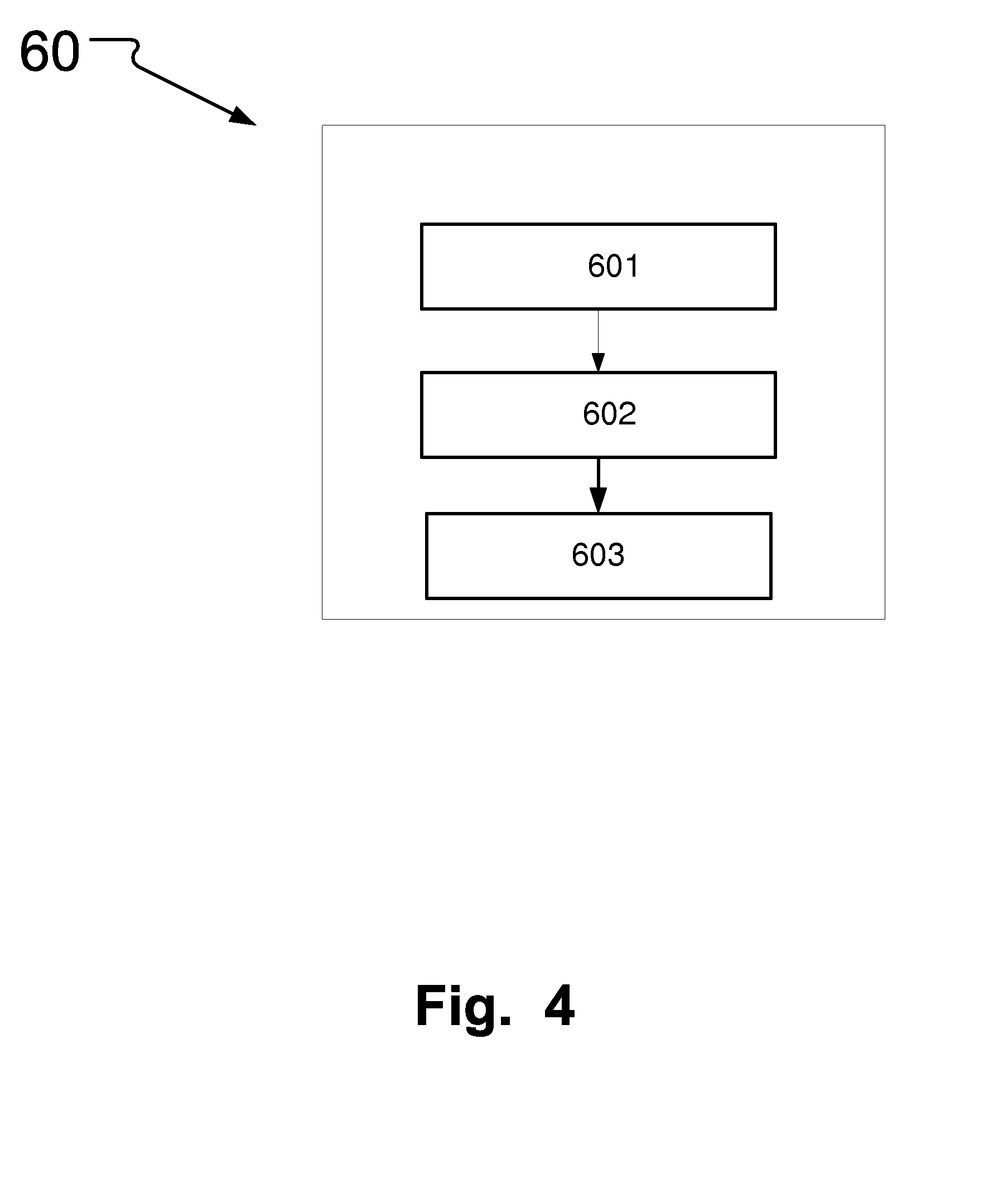 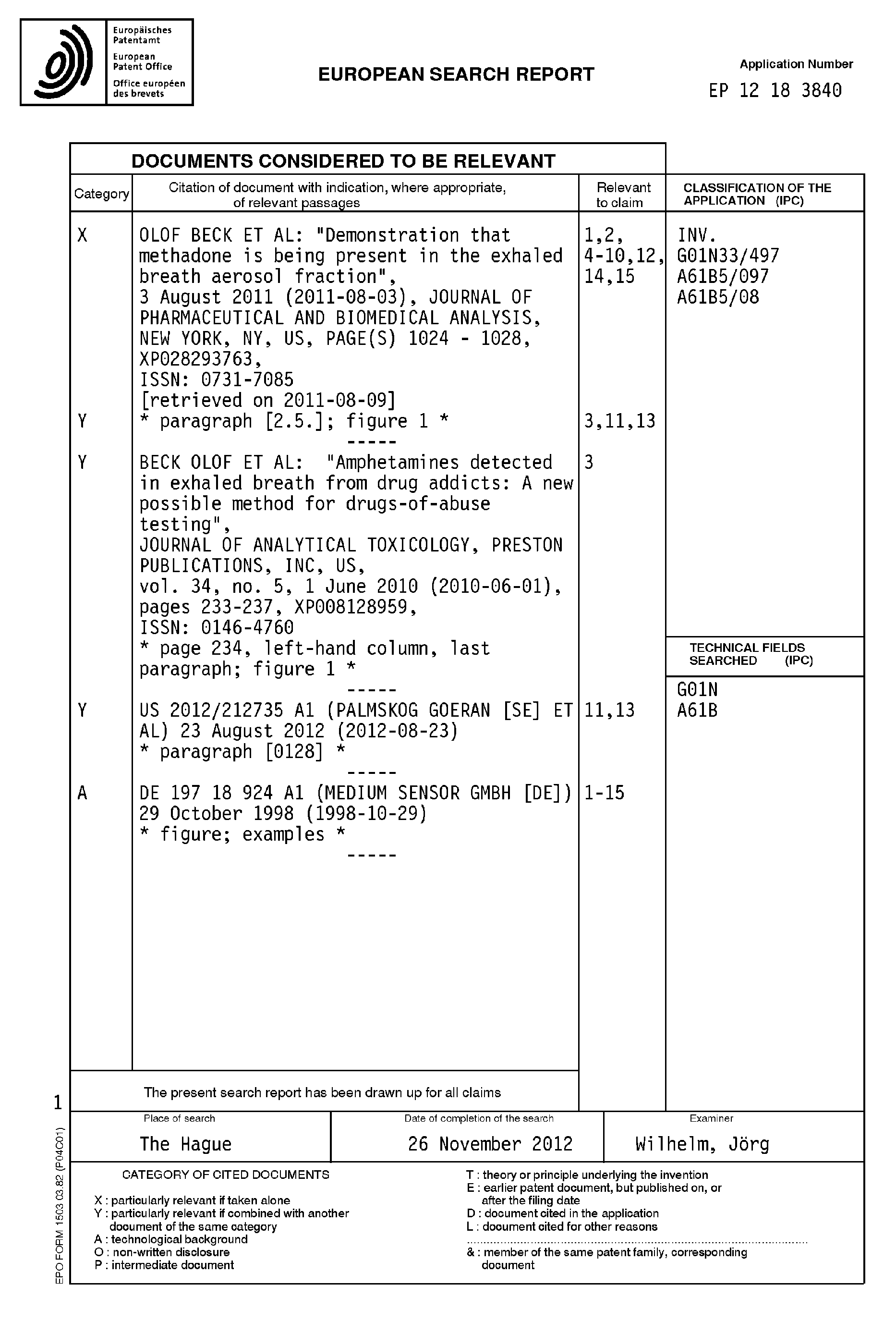 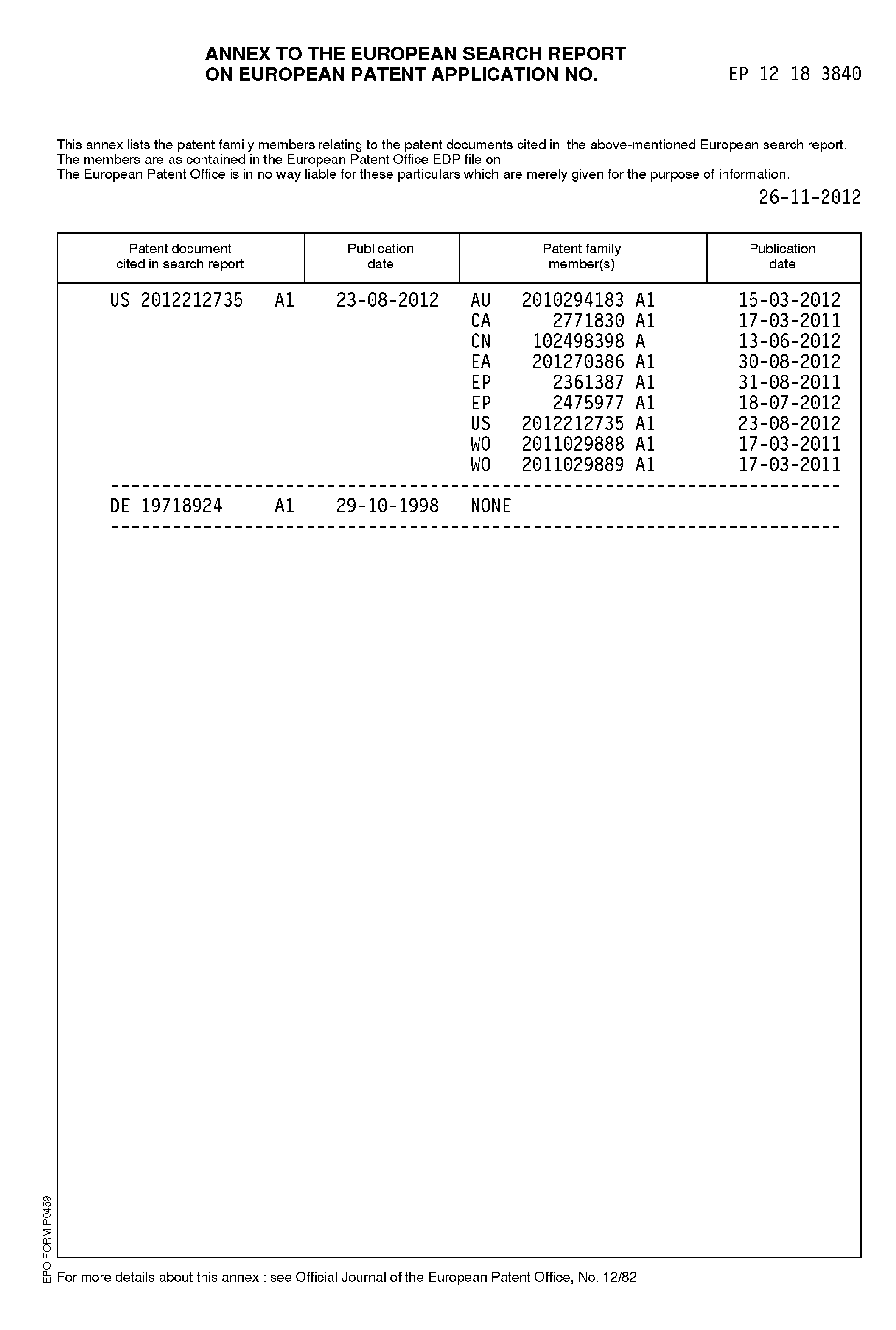