[0001] The present invention relates to use of non-sulfurized lubricants in drilling fluids.

[0002] During the drilling of an oil and gas well, a specialized fluid referred to as a drilling fluid or alternatively a "mud" is circulated through the drill pipe and bit. The principal functions of a drilling fluid include: stabilizing geological formations, providing hydrostatic pressure, cooling the drill bit, and carrying drill cuttings beneath the bit to transport them up to the surface for separation. The other key function of a drilling fluid is to act a lubricant between the drill pipe and the borehole and/or metal casing. The drilling fluid also acts as a lubricant for the drill bit.
[0003] Drilling fluids can be categorized as being either water-based or oil-based. In general, water-based drilling fluids are lower cost and have much better health, safety and environmental performance than oil-based drilling fluids. However, oil-based fluids offer excellent shale stabilization and provide for lower co-efficient of friction. Certain water based drilling fluids such as sodium and potassium silicate based drilling fluids can match the shale inhibition properties but not the coefficient of friction (CoF) of oil based drilling fluids.
[0004] The lubricity of a drilling fluid is an important property as it determines the torque (rotary friction) and drag (axial friction) in the wellbore. There are numerous economic and technical reasons for wanting to lower the coefficient of friction of the drilling fluid. Reduction in torque and drag results in:
[0005] Given the numerous benefits of lower torque and drag, it is very common to add a chemical or mechanical lubricant to a drilling fluid to lower the CoF. There is extensive prior art on chemical and mechanical lubricants for lowering CoF in drilling fluids. Examples of commonly used chemical lubricants include hydrocarbons, synthetic oils, esters, fatty acids, natural oils, and surfactants as well as other compounds.
[0006] A common problem encountered in drilling is accretion which occurs when partially hydrated drill cuttings stick to the drill string. Preferably, a lubricant will have anti-accretion properties. Anti-accretion properties are desirable in a lubricant because they can provide further reductions in friction. Anti-accretion additives are also referred to as rate of penetration enhancers.
[0007] Zinc dialkyl dithiophosphate (ZDDP) is a commonly used additive for motor oils. ZDDP functions as an anti-wear additive by reacting with a metal surface under conditions of temperature and/or pressure. ZDDP decomposes under high temperature and/or rubbing to form a polyphosphate layer that acts as an anti-wear film. This film accommodates and redistributes applied load which reduces wear of the underlying surface. Ancillary properties of ZDDP in motor oil include anti-corrosion.
[0008] Although primarily a motor oil additive, ZDDP has seen extremely limited use in drilling fluid lubricants. US Patent No. 3,712,393 to Sheldahl, et. al. describes the addition of ZDDP to a drilling fluid lubricant composed of sulfurized lard oil, mineral oil and halogenated paraffin. Corrosion inhibitors, wear inhibitors, oxidation stabilizers and odor stabilizers can also be added to the lubricant. ZDDP functions as a wear inhibitor in this composition. The added ZDDP does not function to improve lubricity since, as shown below, sulfurized based lubricants represent one of the few classes of lubricants that do not show a lower CoF with the addition of ZDDP.
[0009] US Patent No. 4,064,056 to Walker, et al. describes a lubricant composition containing from 13 to 15% sodium salts of petroleum sulfonic acids and from 70 to about 82% petroleum oil carrier. ZDDP, among other additives, is added to the mineral oil at a concentration of from 0% to about 1.1% to improve anti wear and antioxidant properties. The presence of sulfurized compounds in the lubricant composition would not allow for ZDDP to impart improvements in lubricity. US2008305974 relates to products useful in friction-reducing extreme-pressure lubricating applications such as internal combustion engines, gear oils and applications which involve rubbing metallic moving parts and teaches additive blends and a process of using combinations of nitro compounds with non-chlorine containing additives such as sulfur-containing moieties and phosphorus-containing moieties. US2007270509 relates to products and processes for making extreme-pressure additives (water-dispersible and oil-based) using starting compounds based on nitro moieties derived from C2-C30 unsaturated fatty acids; C2-C30 unsaturated natural fatty oils or triglycerides; synthetic esters derived from the reaction of C1-C20 alcohols with unsaturated C2-C30 fatty acids; polyglycol esters of unsaturated fatty acids; C2-C20 terminal or internal olefins; C2-C20 polyolefins; C4-C20 polydiolefins; C8-C20 copolymers derived from polyolefins and vinyl aromatics; and C4-C30 alkylated phenols, using nitric acid or gaseous nitrogen dioxide as nitrating agents, followed by chemical modifications involving the synthesis of alkanolamine salts or alkanolamides of nitrated fatty acids or ethoxylated nitrated fatty esters. US2007270509 further relates to additive blends and a process of using combinations of nitro compounds derived from the above compounds with non-chlorine containing additives such as sulfurized and phosphates, and also a process of making soluble oils with nitro novel additives using emulsifier blends. These combinations of extreme-pressure additives (oil-soluble, water-dispersible) and blends are taught to be effective in the processing and lubrication of a wide variety of metals, especially steel, stainless steel, titanium, nickel-based, chromium-based, aluminum, and their nonferrous or low-ferrous special alloys.

[0010] It has been discovered that torque and drag in a drilling fluid can be further reduced when a minor amount of ZDDP is added to the drilling fluid or used in combination with other lubricants. Because of its surface chemical properties, ZDDP preferentially films on a metal surface and prevents clay adhesion. The ZDDP film has lubricant properties but it can also act as a coupling agent for other lubricants. Results are most dramatic in drilling fluids that contain additives that compete for metal surface sites and/or disrupt the film forming properties of traditional lubricants. Further, the ZDDP film helps minimize the sticking of drill cuttings onto the drill string. Reduction in co-efficient of friction is particularly evident when the invention is applied in a silicate based drilling fluid.
[0011] ZDDP consists of zinc bound to diphosphordithioic acid with alkyl or alkaryl ester substituent groups. The alkyl groups are saturated hydrocarbons that vary in length from C3-C12. The basic chemical structure of ZDDP is shown below. The chemical category of ZDDP can be divided into twelve products that share similar structure types. Substantially any ZDDP could be used in a drilling fluid.

[0012] It is anticipated that improvements in lubricity could also be achieved with monothiophosphates and polythiophosphates of cadmium, tin, iron, cobalt, nickel, vanadium, chromium, manganese, molybdenum, tungsten, titanium and zirconium.

[0013] Figure 1 is a photograph showing the effect of different amounts of ZDDP additive in a lubricant on preventing the adhesion of clay on a steel rod.

[0016] In the search for oil and gas, the industry trend is towards wells of greater length and depth. Oil-based drilling fluids are being challenged to provide lower CoF. ZDDP was tested as an extreme pressure lubricant in oil-based drilling fluids.
[0017] The lubricity of the drilling fluid and lubricant was measured using Extreme Pressure Lubricity Tester (i.e. surface to surface drag test). This is a common lubricity test that measures co-efficient of friction between a steel block and a rotating steel ring immersed in a drilling fluid. The standard test involves the application of 150 in-pounds of torque applied to the test block. The ring rotates at 60 rpm. The lubricity tester is allowed to run for at least 5 minutes at which point a friction coefficient reading is taken. The drilling fluid samples are sheared at high speed for 5 minutes prior to testing.
[0018] Given the wide range of drilling fluid types as well as lubricants, it was not possible to illustrate the efficacy of ZDDP under every combination. Other aspects, object and advantages of the present disclosure will become apparent to those skilled in the art from this disclosure and claims.

Example 1: Synergistic effect of ZDDP with other lubricants

[0019] ZDDP was added to a broad cross-section of drilling fluid lubricants. The ZDDP-enhanced lubricant was prepared by adding 5.0 g of ZDDP into 95 g of lubricant and stirring. The ZDDP readily mixed into the lubricant at room temperature. In the case of graphite, 20 g of ZDDP was mixed into 80 g of graphite.
[0020] Reduction in CoF was measured on a potassium silicate based drilling fluid prepared in the lab according to Table 1b. Lubricants were tested in the drilling fluid at a concentration of 2% wt/wt (i.e. 10 g lubricant into 500 g drilling fluid). A 2% lubricant loading was chosen as a reasonable concentration for initial testing. Lubricant and drilling fluid were shear mixed and then hot rolled for 16hrs @ 48.89°C (120 F). Table lc indicates the friction readings and% reduction in coefficient of friction. Notably, no reduction in the CoF was achieved by adding ZDDP to NXS, a sulfurized lubricant.
Table lb: Base Drilling Fluid
-chemical components were added under agitation at room temperature. The drilling fluid was then aged by hot rolling for 24hrs at 48.89°C (120 F).
Table 1c: Reduction in Coefficient of Friction

Example 2: Reduction in friction in a sodium silicate-based drilling fluid

[0025] Glycol-based drilling fluids represent a class of water based drilling fluids that provide shale inhibition. A glycol based drilling fluid was formulated with 8% v/v polyethylene glycol (PEG 300), polymers, water and simulated drill solids. Lubricity testing was done on ZDDP by itself as well as lubricant blended with ZDDP (9:1). Table 5 shows a reduction in the CoF when ZDDP is added to the lubricant.
Table 5: CoF for a Glycol Based Drilling Fluid

[0029]
[0030] ZDDP was tested as a standalone lubricant. Table 8 shows that ZDDP lowered the CoF of the drilling fluid.
Table 8: CoF for an Oil Based Drilling Fluid

[0031] A completion fluid is a solids-free liquid placed that is sometimes used at the final stages of well completion. Completion fluids are typically brines (chlorides, bromides and formates). The fluid is meant to be chemically compatible with the reservoir formation and fluids, and is typically filtered to a high degree to avoid introducing solids to the near-wellbore area. ZDDP was tested in a saturated solution of potassium formate (75% active) and potassium formate diluted 1:1 with water. Table 9 shows that the CoF of the completion fluid was reduced with the addition of ZDDP.
Table 9: CoF for a Formate Completion Fluid

[0032] Shale accretion was measured by observing the adhesion of clay onto a metal pipe. Oxford shale was sized through 6-8 mesh screen. Oxford shale is noted for its "stickiness" and is a standard shale for measuring accretion. 20 g of sized shale was placed in a 500 ml steel aging cell. A ¾" x 6" steel rod was cleaned and placed in the aging cell. 350 ml of water, water and 0.2% ZDDP and water and 2.0% ZDDP were added to the aging cells. Samples were hot rolled for 16 hrs at 48.89°C (120 F). Steel rods were observed for clay particles sticking to the steel. The rod that was rolled in water was covered in a fine film of clay. Figure 1 shows the effect of the addition of ZDDP to water in reducing the extent of clay adhesion to the steel rod. Increasing amounts of ZDDP showed a stark reduction in the extent of clay adhesion on the rod. 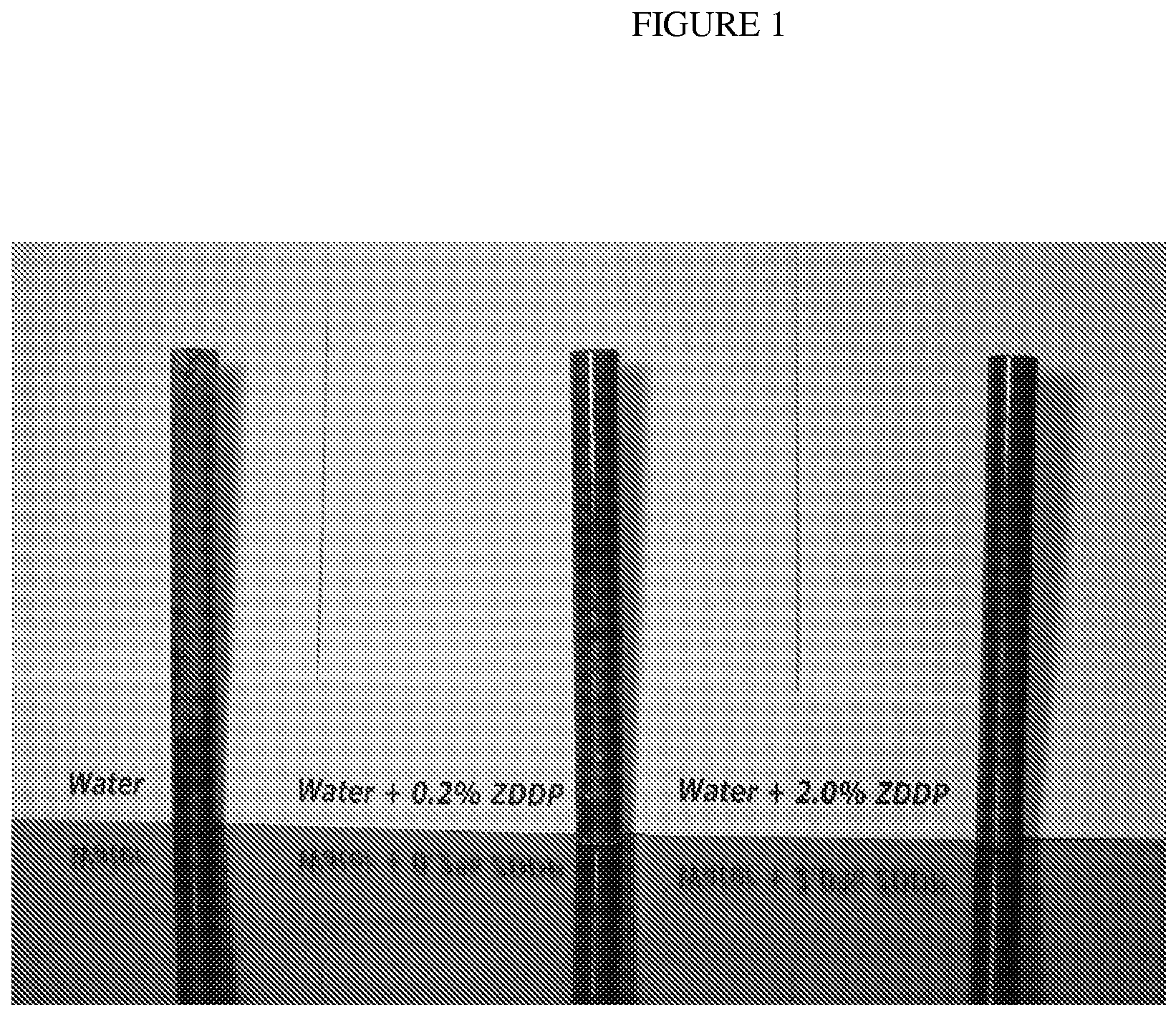