[0001] The present invention refers to a water treatment device.

[0002] It is known that for reaching and keeping an adequate quality of the water, it is important to consider the amount of oxygen dissolved in the water. In particular, in absence of considerable phenomena of pollution, the water has typically a sufficient amount of dissolved oxygen. Unless the water is de-bacterized, thanks to the dissolved oxygen a biological activity - automatically balanced - occurs thanks to aerobic bacteria that degrade the natural organic components. Substantially, the concentration of oxygen dissolved in water is the result of a first plurality of biological processes that tend to increase the concentration (for example, the atmospheric re-aeration), and of a second plurality of processes that, in contrast, tend to decrease the concentration thereof, i.e. by consuming the oxygen that is present in the water.
[0003] The treatment of the waters has always been object of studies; waters in fact often have impurities of physical or chemical type that shall be eliminated or reduced below predetermined thresholds according to the following destination of the water to be purified.
[0004] In particular, the addition of biodegradable substance from the outside (civil, industrial or agricultural waste waters) causes an intensification of the bacterial activity with a consequent higher consumption of the oxygen dissolved in the water. The concentration of dissolved oxygen, therefore, tends to decrease with the incrementation of the bacterial activity.
[0005] Should said concentration not being restored through water re-oxygenation processes, the water environment becomes anoxic and, through the stop of the metabolic aerobic processes, new anaerobic processes occur with the release of toxic or anyway unpleasantly smelling chemical compounds, with detrimental results according to the hygienic-sanitary point of view, and in general for the surrounding environment.
[0006] It shall be noted that the processes of reduction of the concentration of dissolved oxygen, not only derive from civil installations or contaminants, but also from industrial ones. Actually, there are productive cycles that exploit the recycling of water also in the industrial field, and also in this case are known many phenomena of quick decrease of the water quality measured in terms of concentration of dissolved oxygen.
[0007] There are known water purification devices that present inside them additives or chemical agents capable of enhancing the physical characteristics of the waters for transforming the dirt water for example in drinking water.
[0008] Anyway, these devices are characterized by the drawback of having a periodic dosage of the additive or chemical agent for keeping their effectiveness, and separating in a second time the precipitations that are formed.
[0009] Further water purification devices are provided with ultra-filtration systems, in which substantially the water passes inside a membrane filter through the inlet pressure upstream; anyway, said systems are characterized by a considerable cost, fragility, a low obtainable flow of purified water and the compulsory need of an efficient maintenance.
[0010] Further methods that are used for the oxygenation of waters are based on mechanical systems that transfer air inside the mass of the water.
[0011] For example said methods imply the use of turbines - positioned on the surface or even submerged - or blowers that through diffusers placed at the bottom of oxygenation basins, make water gurgle in very small bubbles. Said bubbles tend to rise up to the surface, therefore making the time interval of oxygen interchange with water extremely low.
[0012] So, the known systems not only need a great apportion of air, but also require a significant energetic provision; therefore, they are convenient only when the amounts of water to be treated are considerable and the process shall be actually fast. Said systems are therefore mainly used for industrial use.
[0013] The purpose of the present invention is to realize a water treatment device that solves at least partially the aforementioned drawbacks, being particularly recommendable for modest hourly flows.

Description of the figures.

[0029] Further features and advantages of the water treatment device will result from the description hereinafter presented that represents an example of preferred and non-limiting embodiment with reference to the annexed drawings. In detail:

Detailed description of the invention.

1. A water treatment device, said waters being contained in an external container or basin (11; 20) susceptible of containing liquids inside; said device (10) comprising an exhaust conduit (16) for the extraction of the treated water; the water treatment device (10) is characterized in that it comprises at least a pot or bell (14) of oxygenation, positioned inside the external container (11), having a first lower opening (14a) communicating with said external container (11) and a second opening wherein said exhaust means (16) are introduced for extracting fluids; said exhaust conduit (16) extending inside the pot (14) for a depth sufficient to keep an its terminal position (16a) below an air pocket present in use in an upper zone of said pot (14).

2. A device according to claim 1, wherein said pot is positioned at a fixed height inside said container or external basin (11; 20).

3. A device according to any of the preceding claims, comprising a plurality of oxygenation pots (14) positioned at an equal height inside said external container (11), and wherein each of the pots of said plurality of pots (14) comprises a respective exhaust conduit (16) connected to a common collection conduit of the treated water.

5. A device according to any of the preceding claims, further comprising air reintroduction means inside said pot (14).

7. A water treatment device, comprising a plurality of treatment stages according to any of claims 1-6.

8. A device according to any of the preceding claims, wherein said first opening (14a) is directed towards the lower end of said container or basin (11).

9. A device according to claim 1, further comprising an inlet conduit (13) for the waters to be treated rigidly fixed with hydraulic sealing on said external container (11).

10. A device according to claim 1, further comprising retention means of said pot (14) inside said basin, said basin being pre-existing.

11. A device according to claim 1, realized in a corrosion free material.

12. A method of water treatment, characterized in that it comprises a step of positioning a water oxygenation pot (14) inside a basin or container (11; 20) at a predetermined depth with respect to a height reached by the water to be treated inside said container, such as to have a partial replenishment of said pot (14) and an air bubble positioned over the water partially filling said pot, and a following step of extraction of said water from said pot (14) through an exhaust conduit (16) preemptively positioned inside said pot in such a way to have a respective opening (16a) positioned below the height reached by said water into said pot or basin; said method further comprising a step of oxygenation of said water through a passage from said basin or container to said pot (14).

13. A method according to claim 12, wherein said step of oxygenation happens with a slow water flow.

15. A method according to any of the preceding claims 12-14, comprising a step of adaptation of the depth of said pot (14) according to the level of said water inside said container or basin. 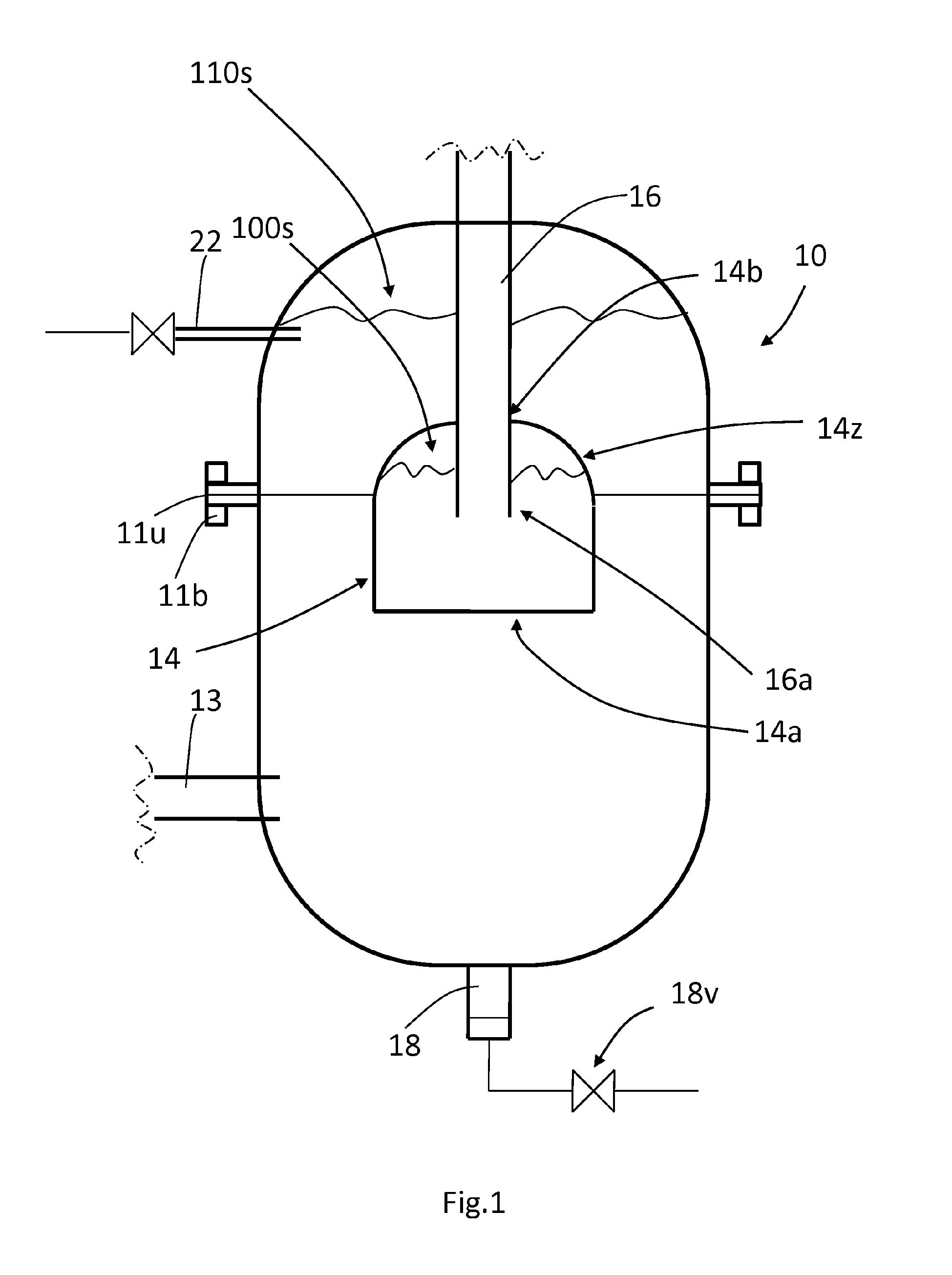 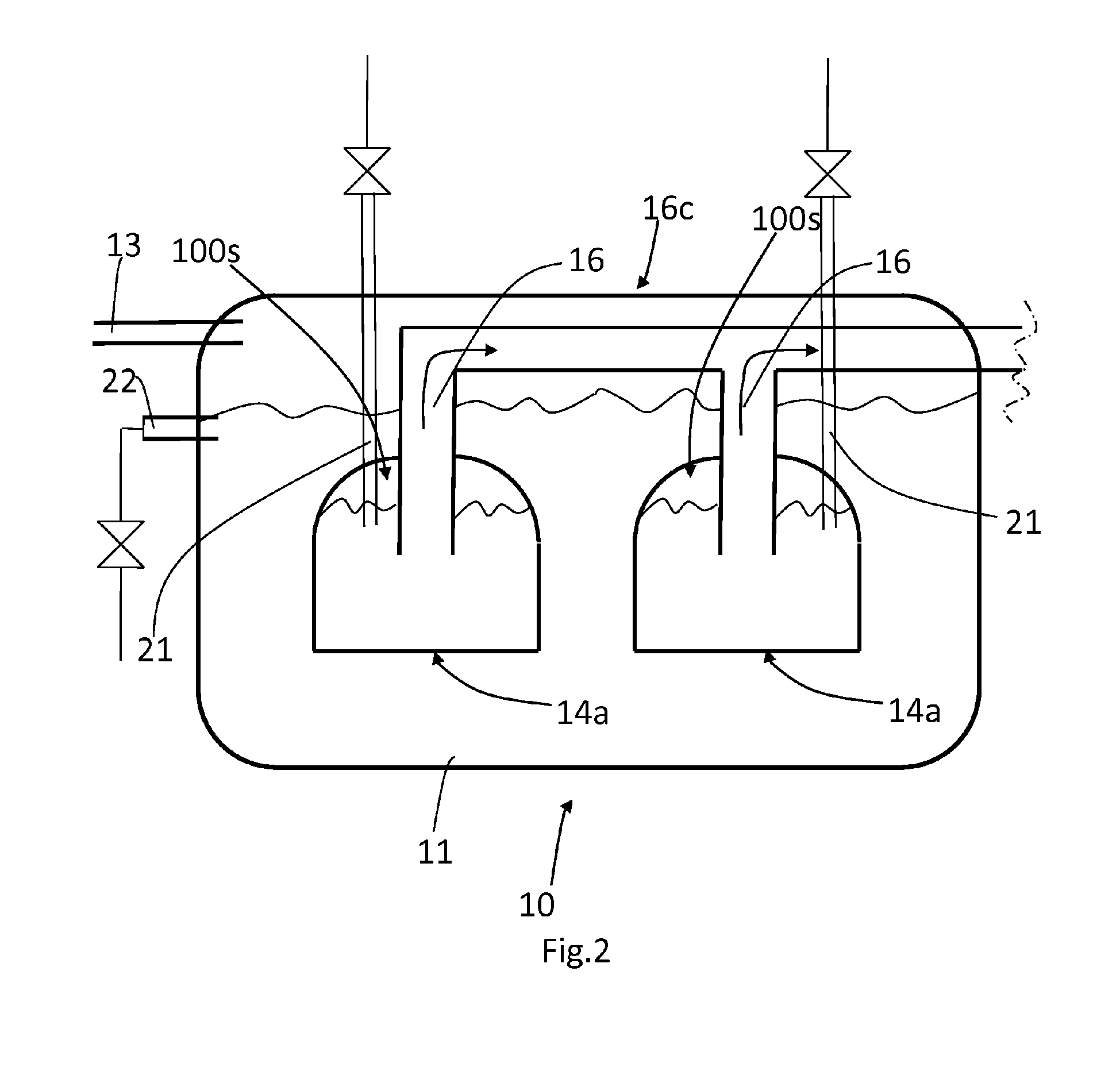 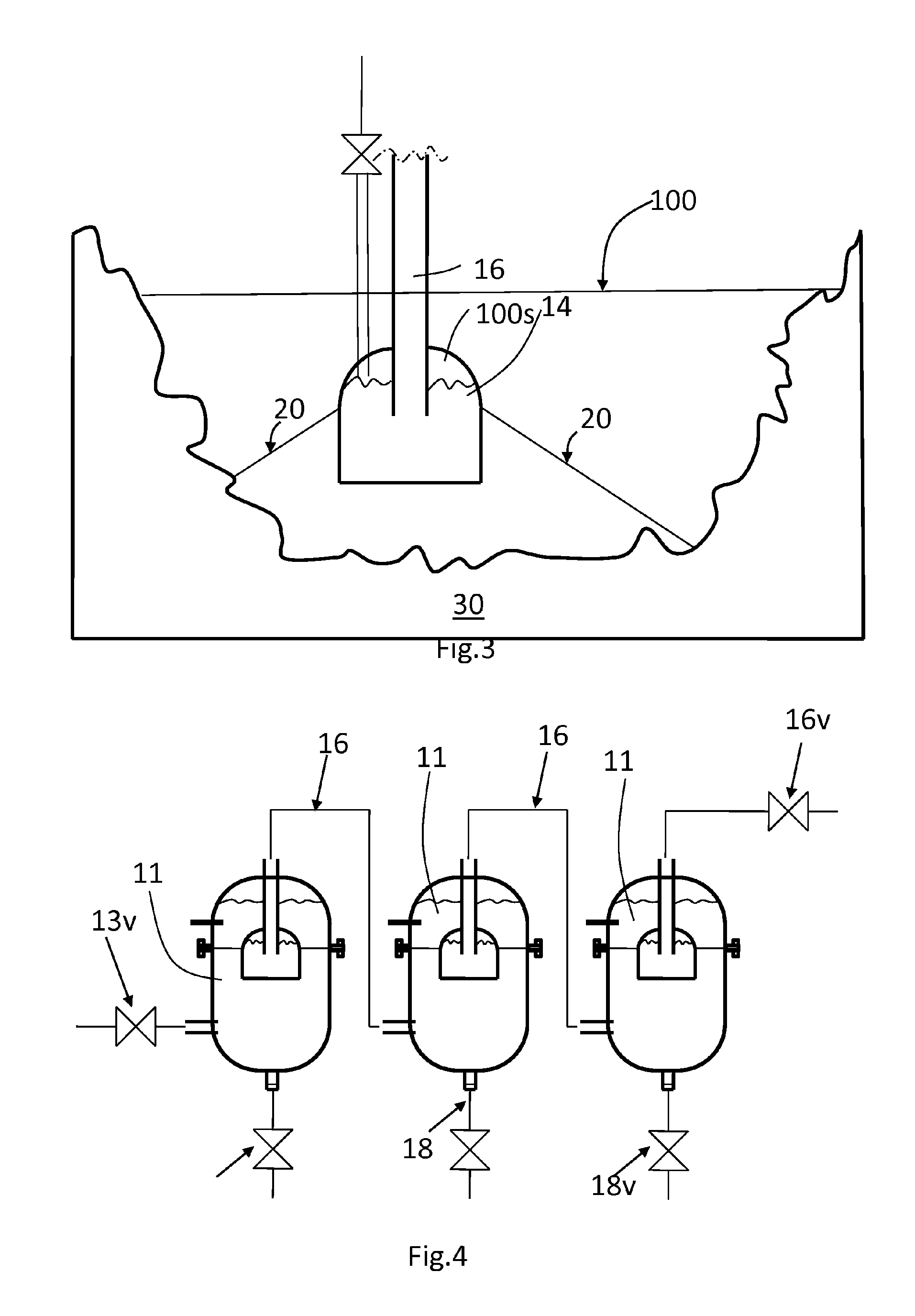 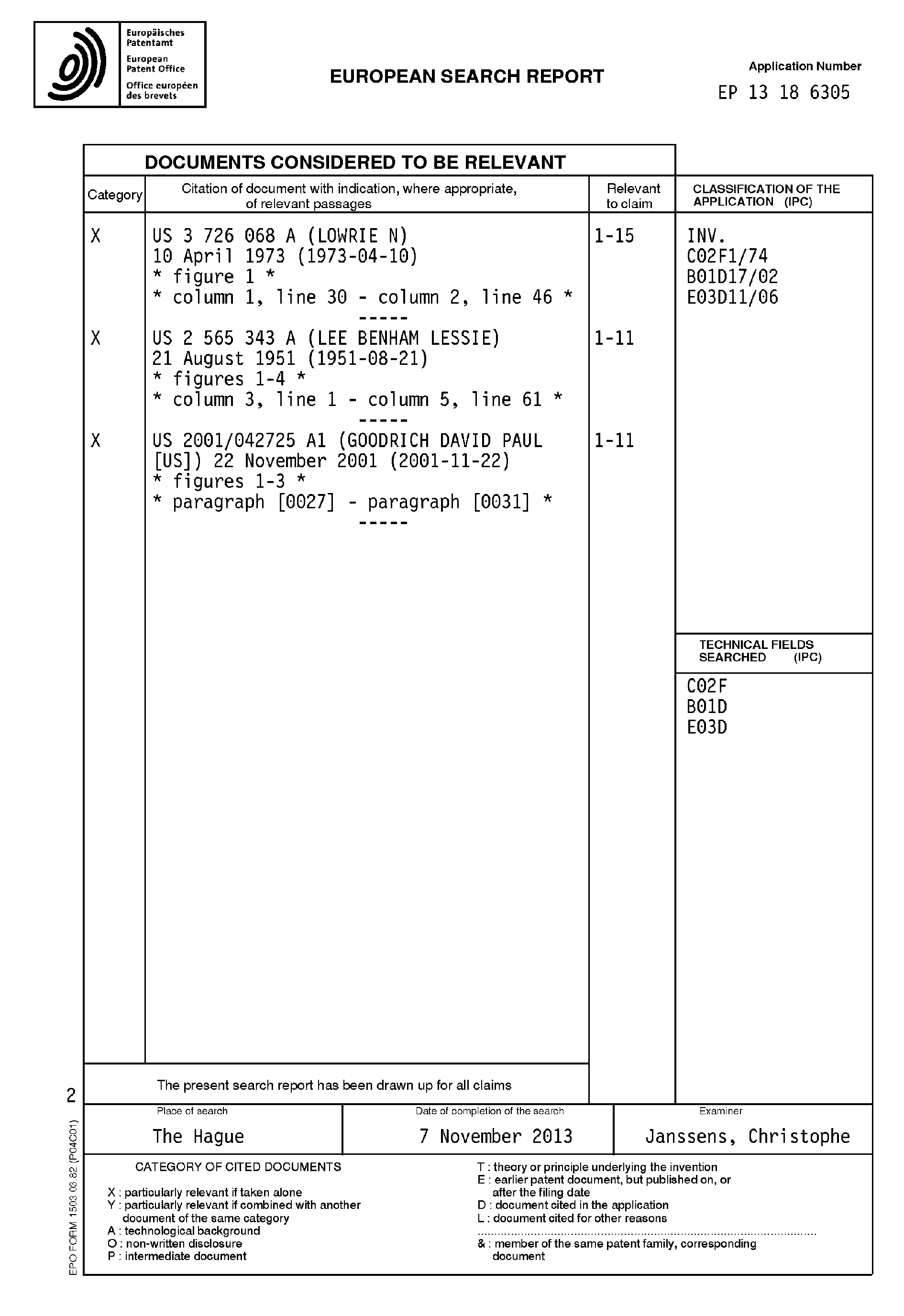 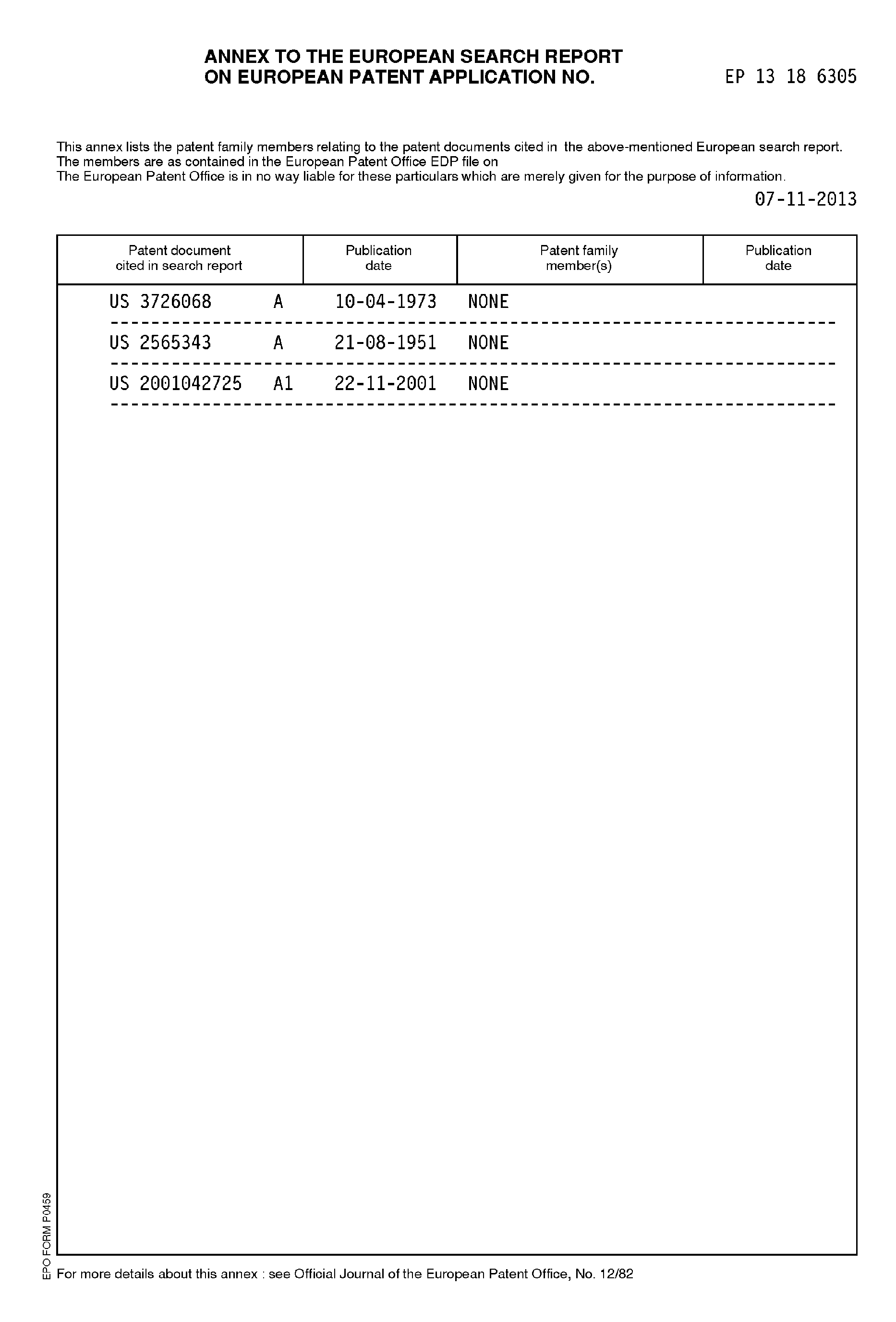