[0001] Many portable electronic devices are capable of displaying maps and providing navigational assistance to a user. Such navigational assistance often requires the device to calculate one or more possible routes from a starting point to a destination. What are needed are devices, methods, and machine-readable media to facilitate intuitive comparison and selection of calculated navigation routes on a portable electronic device.
[0002] JP 2002 243480 describes a navigation system by which a bypass route for avoiding a congestion or the like can be selected by a user. In the system disclosed, a processing control unit acquires a designated return point P by converting a prescribed place (P) into a position (a latitude, a longitude) on a map when the prescribed place (P) is pressed by the user on a guidance route R1 connecting a stating place S to a destination G as shown in Fig. (a). A section up to the return point P from an own-vehicle position V (a first crossing) is set as an avoidance section L. The processing control unit searches a plurality of bypass routes to bypass the set avoidance section L, and it displays, e.g. three bypass routes R2 to R4 as shown in Fig. (b). After that, when any of the bypass routes is selected by the user, a new guidance route containing the selected bypass route is prescribed, and the user is guided up to the destination G according to the new guidance route.

[0003] Devices, methods, and machine-readable media to facilitate intuitive comparison and selection of calculated navigation routes are disclosed.
[0004] According to some embodiments, a number of calculated navigation routes can be displayed on a map. Each route may be highlighted in a manner that allows each route to be easily differentiated. For example, each route may be identified with different color or highlighting schemes and/or may be identified by an unobtrusive callout. As disclosed herein, a callout.
[0005] US2010312466 discloses a device and a method for navigating a vehicle along a route from a starting position or an instantaneous position to a destination. To this end, a route calculation device of a navigation device calculates a route course which is composed of a sequence of several coherent roads stored on a digital map of a memory device as a first route, and additionally calculates at least one alternative route by allocating a penalty attribute, especially increased average traveling time, road distance or the like, to at least one road of the first route.

[0006] The invention is defined in the appended claims, to which reference should now be made.

[0007] The above and other aspects and advantages of the invention will become more apparent upon consideration of the following detailed description, taken in conjunction with accompanying drawings, in which like reference characters refer to like parts throughout, and in which:

FIG. 1 shows an illustrative screen shot of a map with several alternative routes displayed simultaneously in accordance with various embodiments;

FIG. 2 shows an illustrative screen shot of a zoomed- in map with several alternative routes displayed simultaneously in accordance with various embodiments;

FIG. 3 shows an illustrative screen shot of a list of navigation tiles in accordance with various embodiments;

FIG. 5 shows an illustrative screen shot of a navigation tile in accordance with various embodiments;

FIG. 7 shows an illustrative screen shot of an electronic device in accordance with various embodiments;

FIG. 8 shows a flowchart of a method for comparing and selecting alternative navigation routes in accordance with various embodiments;

FIG. 9 shows a flowchart of a method for comparing and selecting alternative navigation routes in accordance with various embodiments;

FIG. 10 shows a flowchart of a method for comparing and selecting alternative navigation routes in accordance with various embodiments;

FIG. 11 is a schematic view of an illustrative touch I/O device that can receive touch input for interacting with a computing system via wired or wireless communication channel in accordance with some embodiments of the invention;

FIG. 12 is a block diagram of an illustrative system for providing alternative navigation routes in accordance with some embodiments of the invention;

FIG. 13 is a block diagram illustrating an exemplary API architecture in accordance with some embodiments of the invention; and

FIG. 14 is a block diagram of an illustrative software stack by which applications can make calls to Services A or B using APIs in accordance with some embodiments of the invention.

Detailed Description of the Disclosure

displaying a map on a touch-sensitive display screen of an electronic device (1200) at a first zoom level (100);

calculating, by the electronic device (1200), a plurality of routes extending from a starting point to a destination point;

displaying the plurality of calculated routes from the starting point to the destination point simultaneously overlaid on the map on the touch-sensitive display screen at the first zoom level;

for each calculated route of the plurality of calculated routes, displaying an associated callout (101', 102', 103', 104', 105') that displays a corresponding time to travel to the destination point; and

receiving a selection of a route from the plurality of calculated routes via the touch-sensitive display screen; characterised in that the method further comprises the steps of:

providing navigation assistance along the selected route; and

recalculating periodically a second plurality of navigational routes based at least on a current location of the electronic device.

distance to a next turn; and

distance to a Point of Interest.

accessing a set of transit data related to the transit vehicle's traversal of the transit portion; and

a set of processing units; and

a machine readable medium storing a program for execution by at least one of the processing units, the program comprising sets of instructions for implementing the method according to any of claims 1-16. 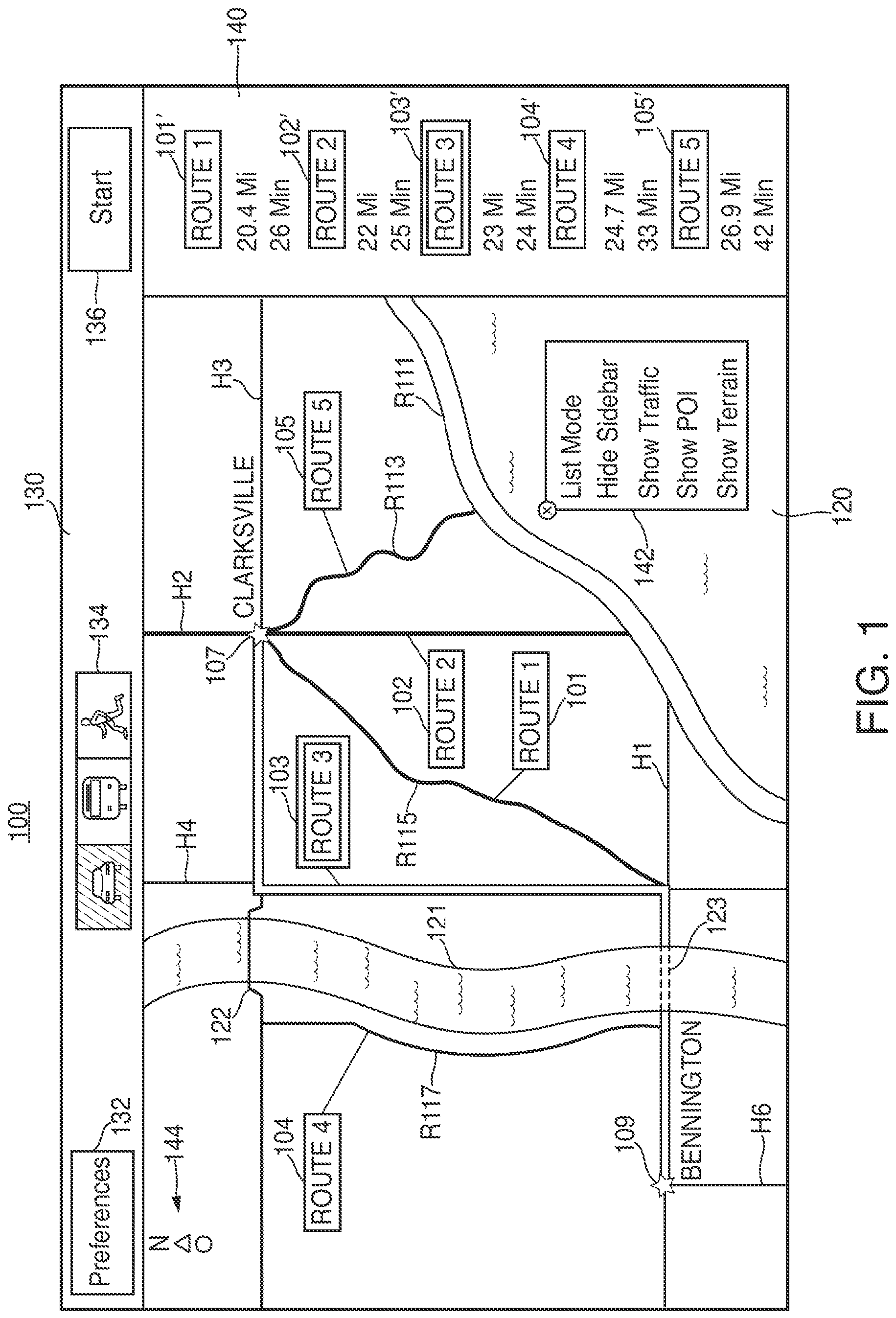 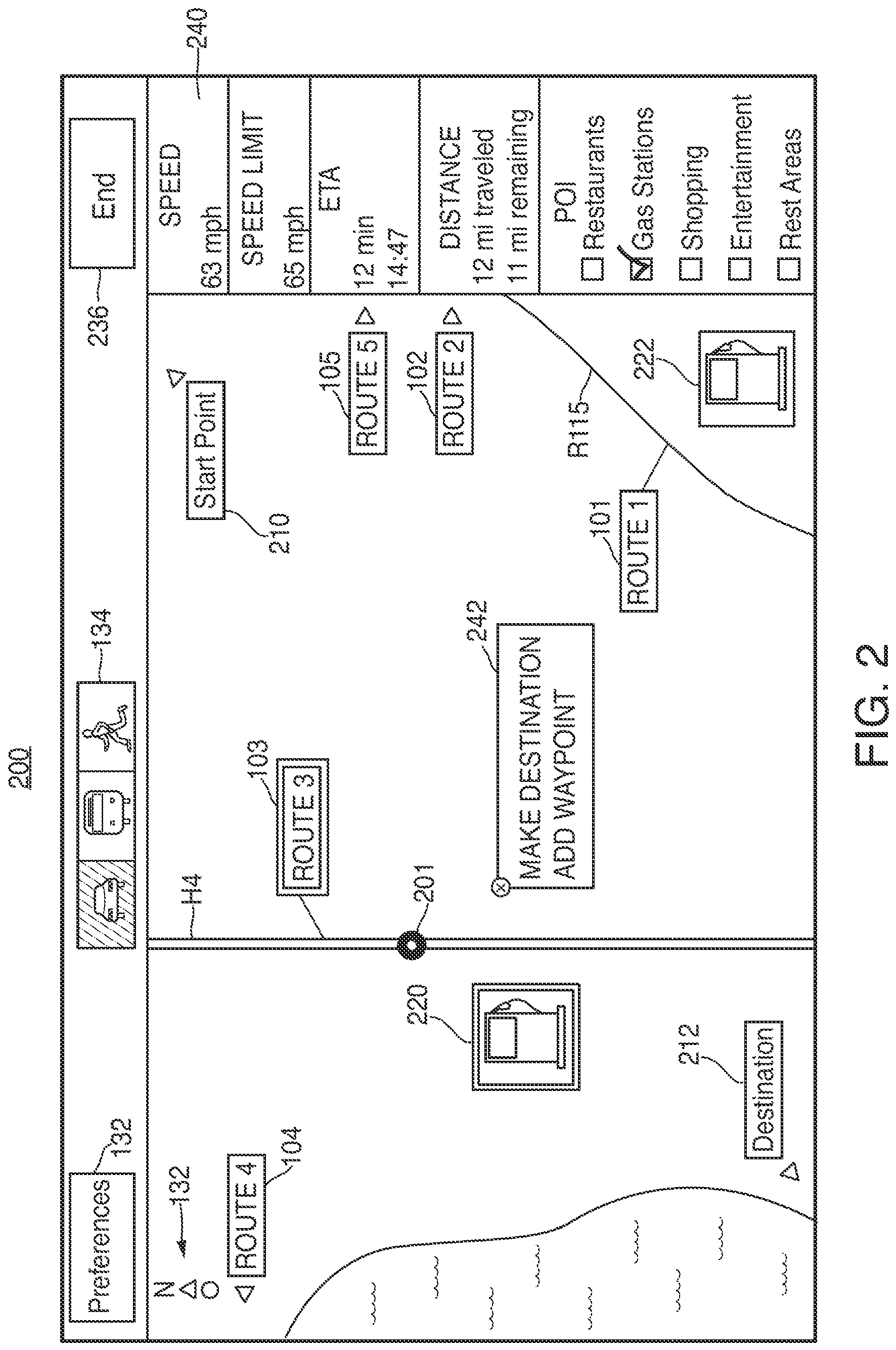 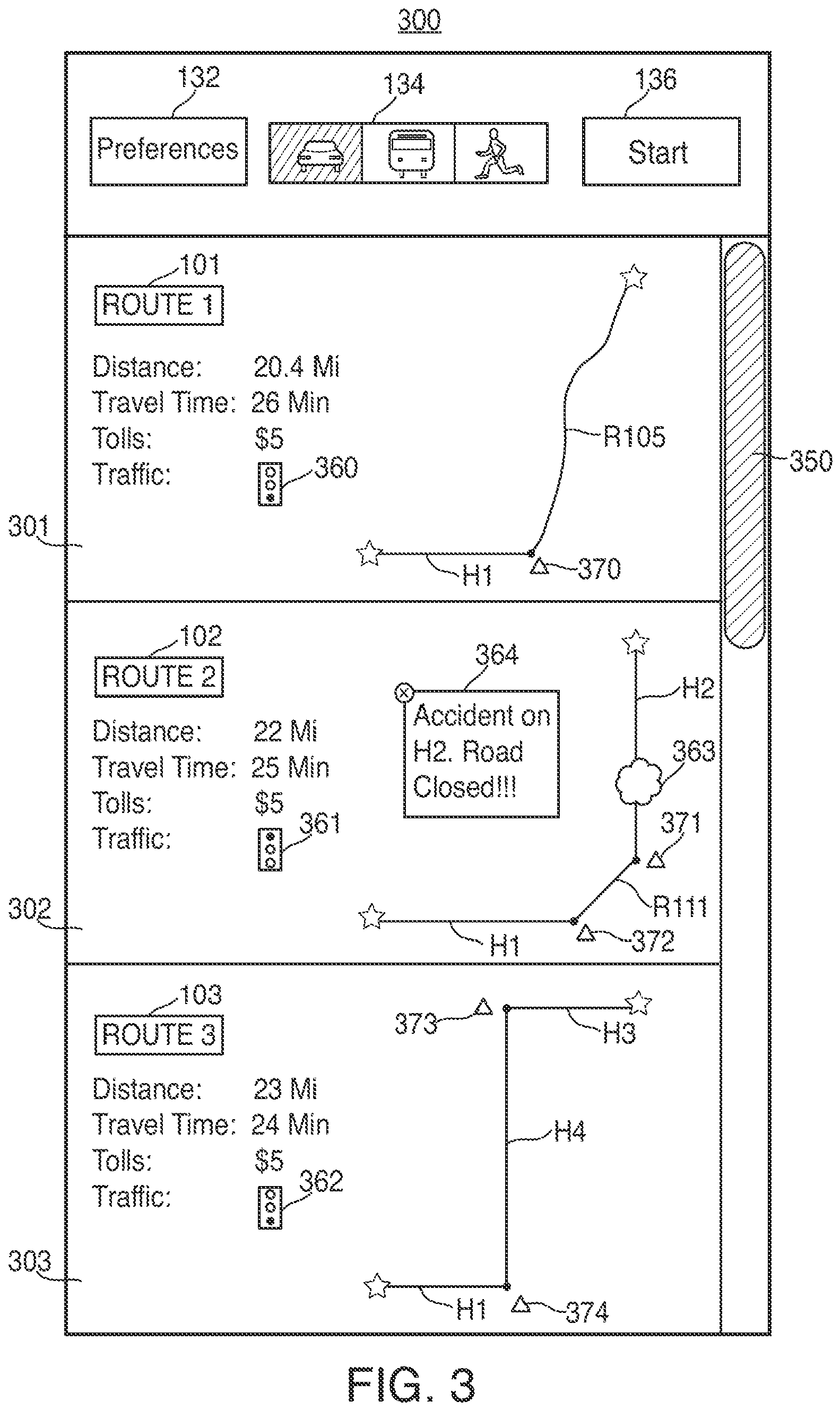 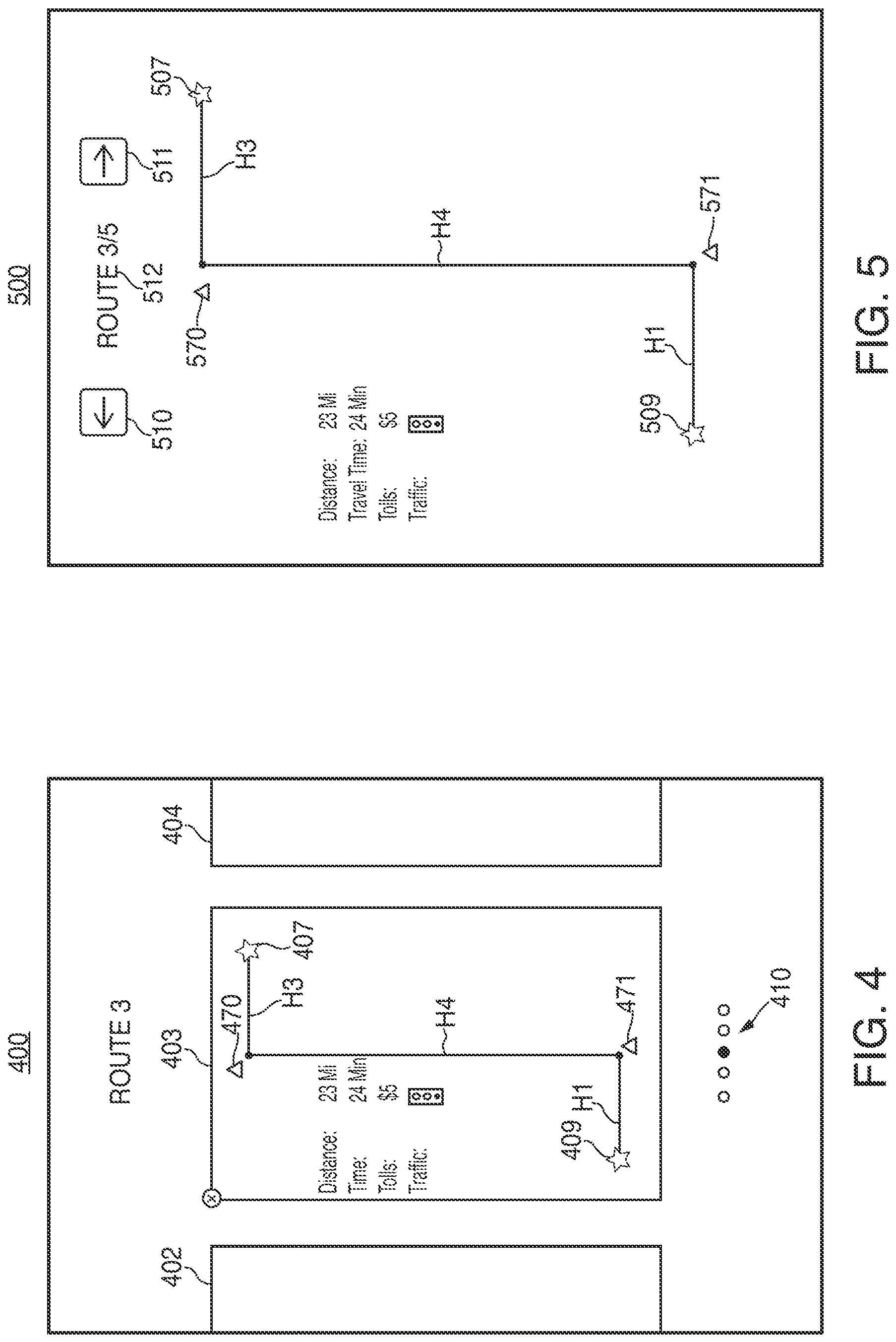 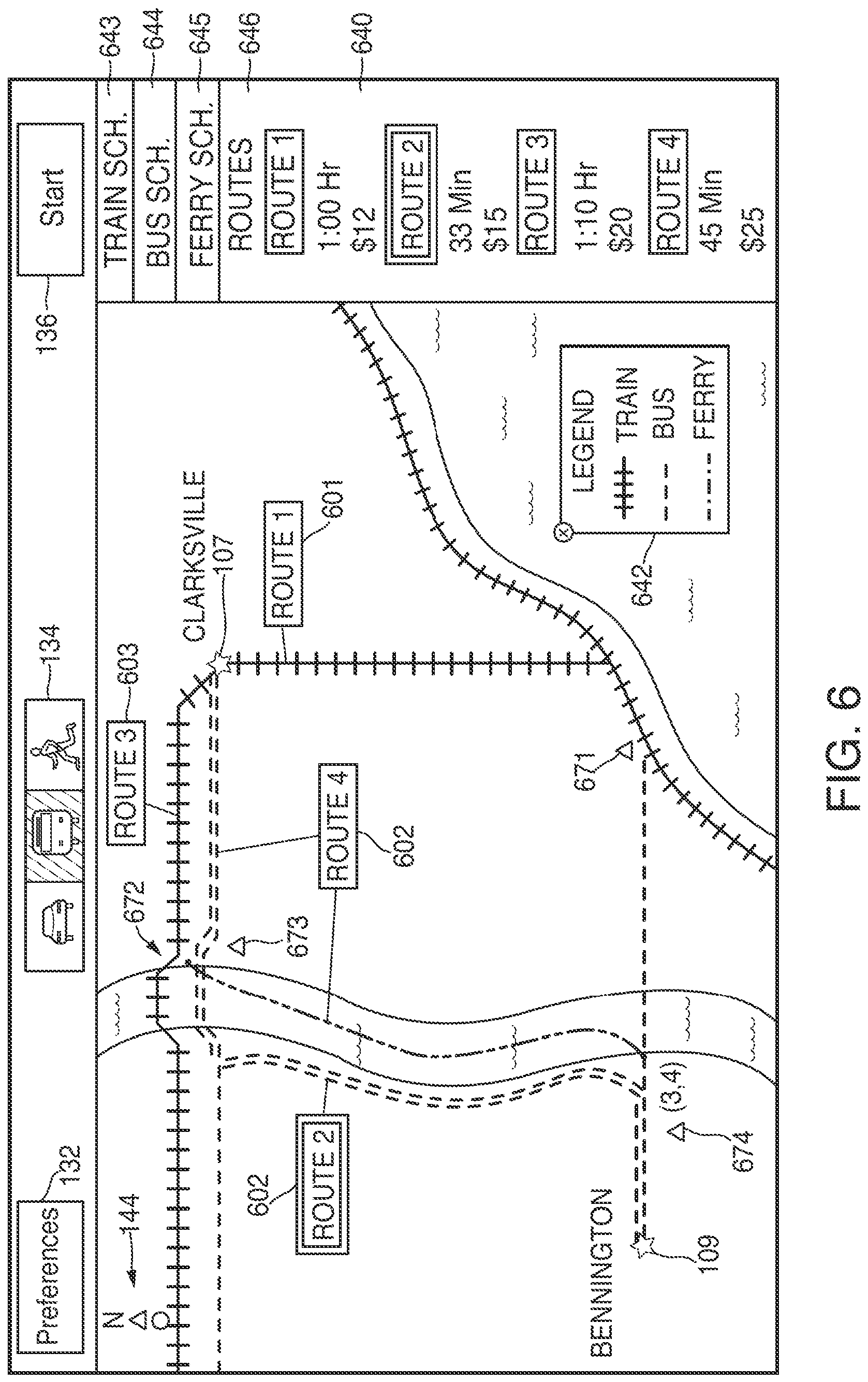 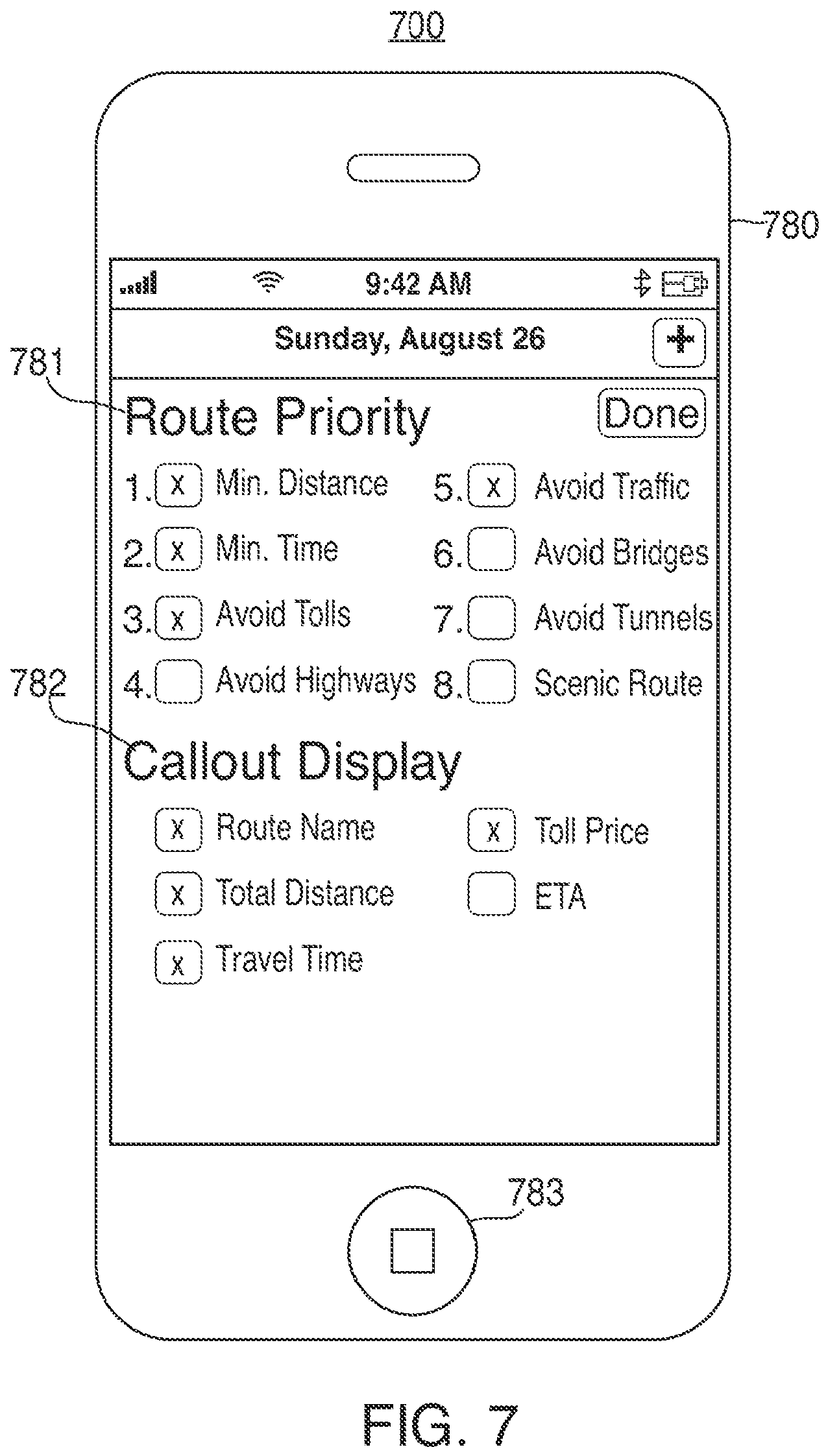 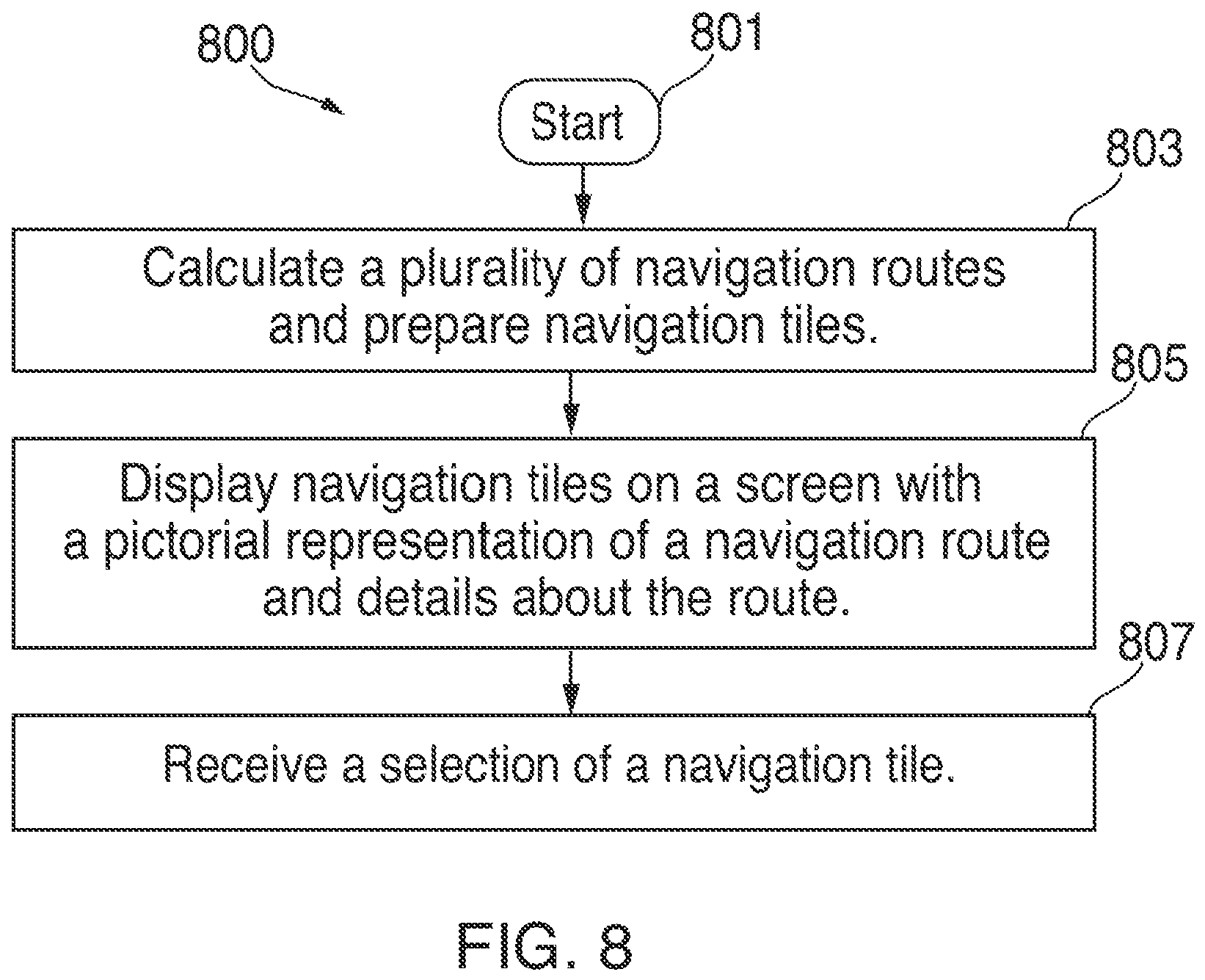 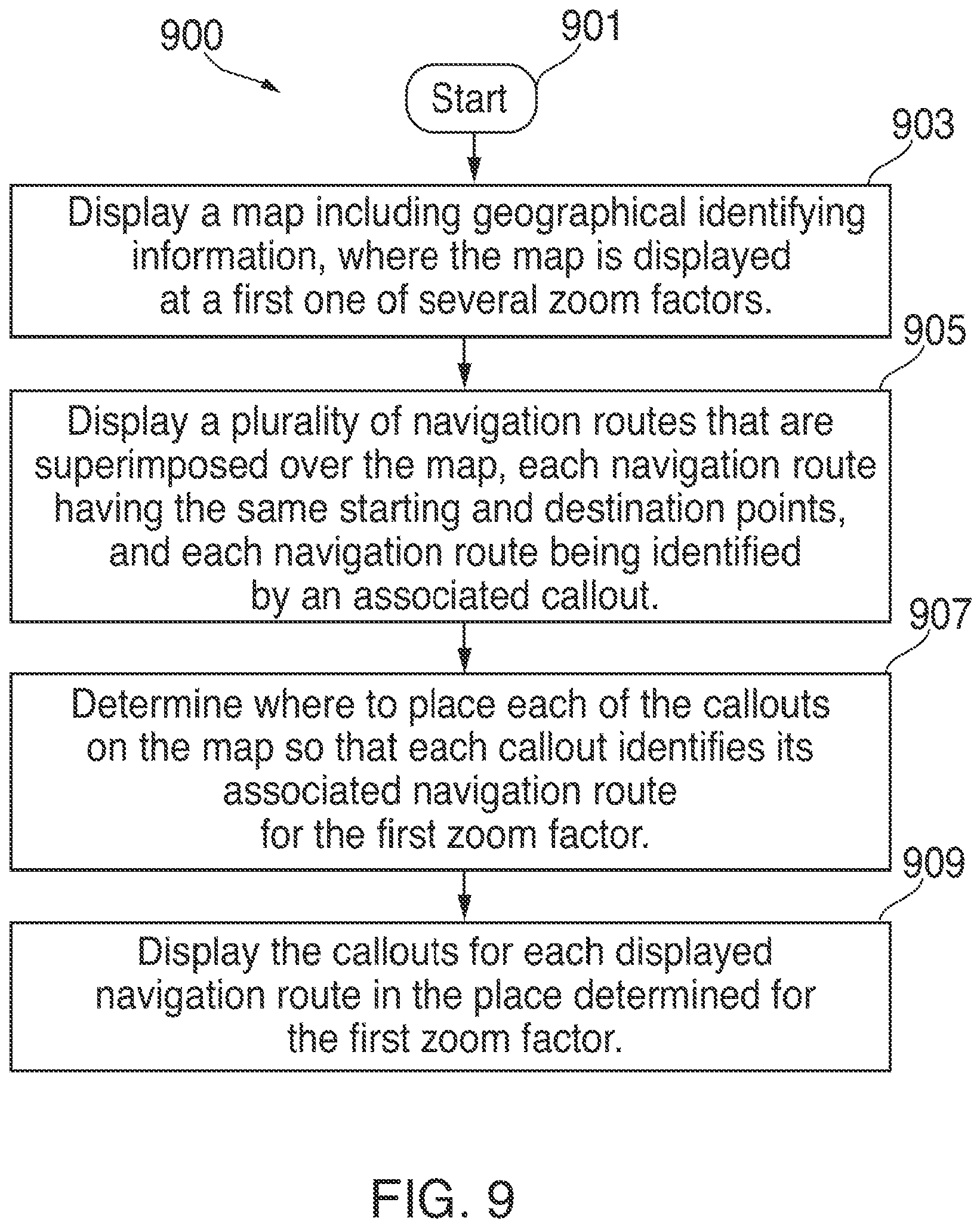 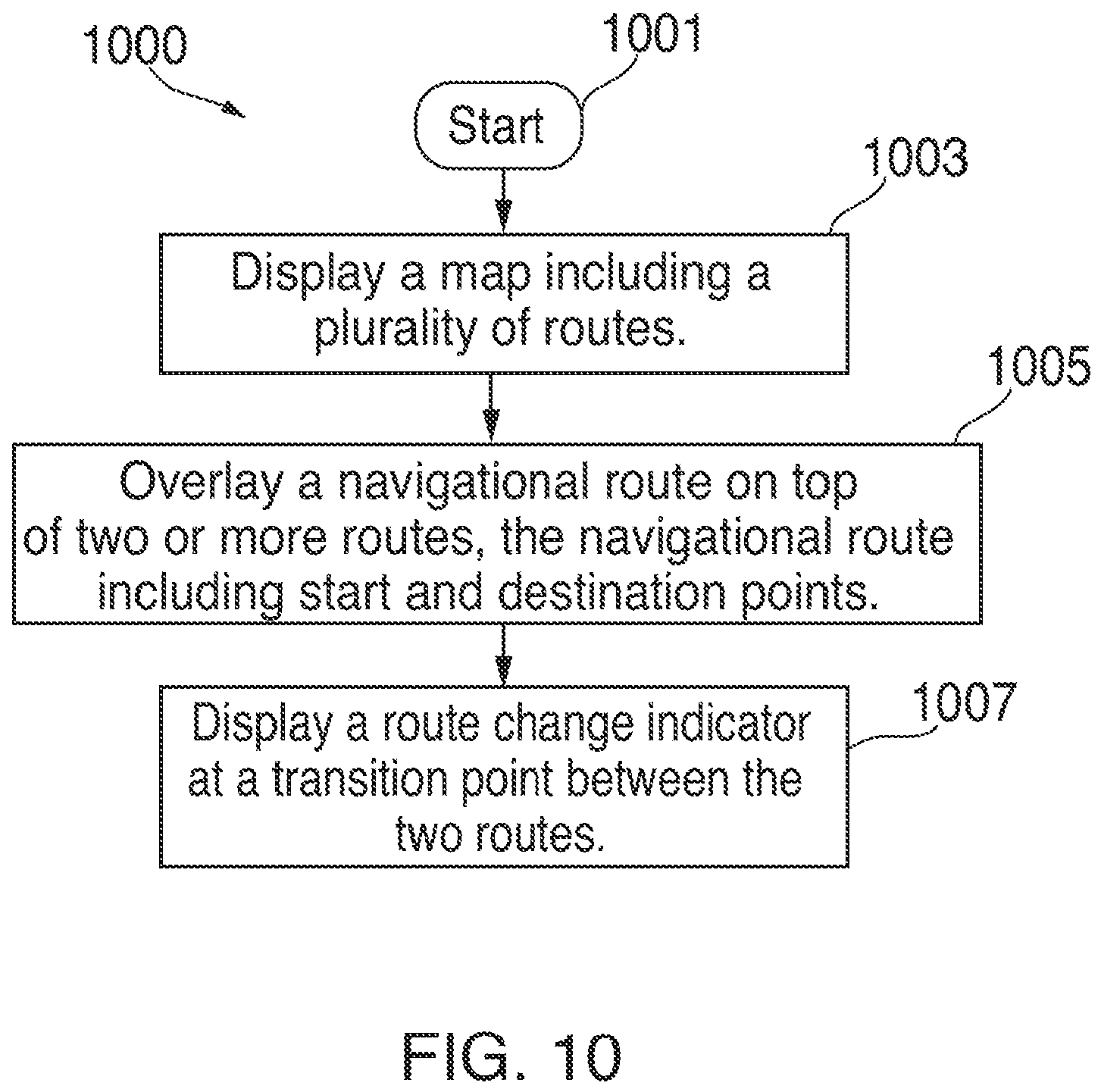 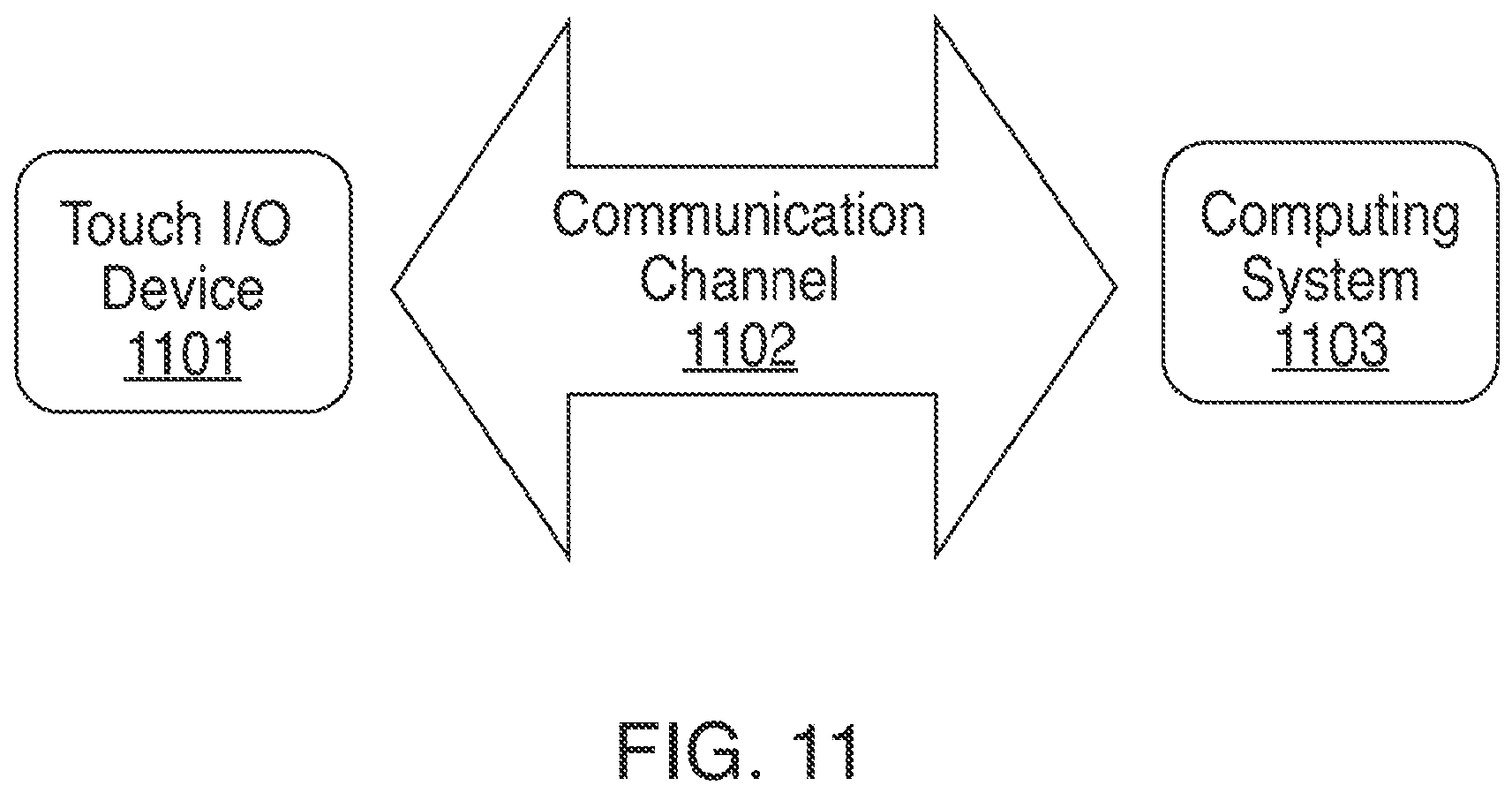 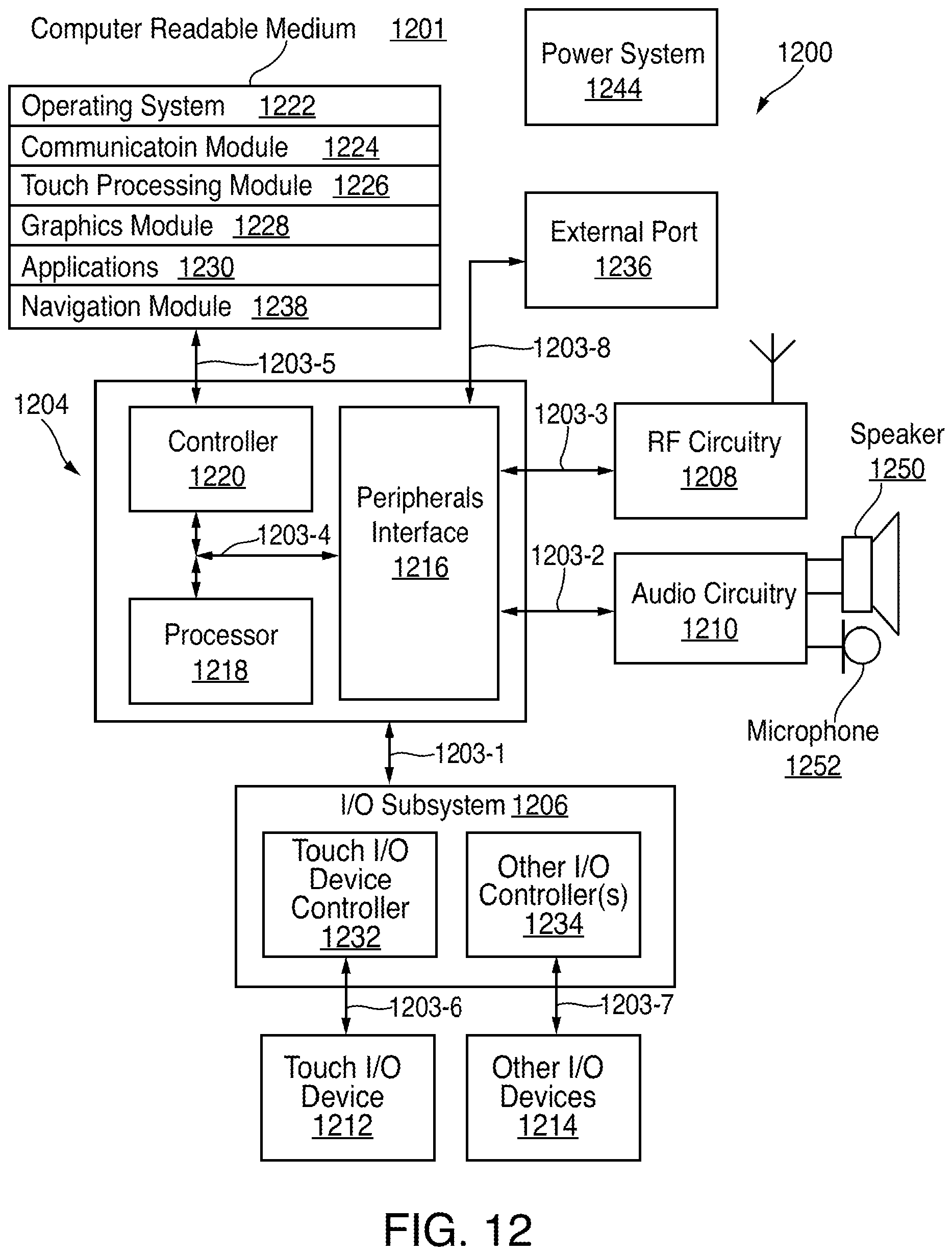 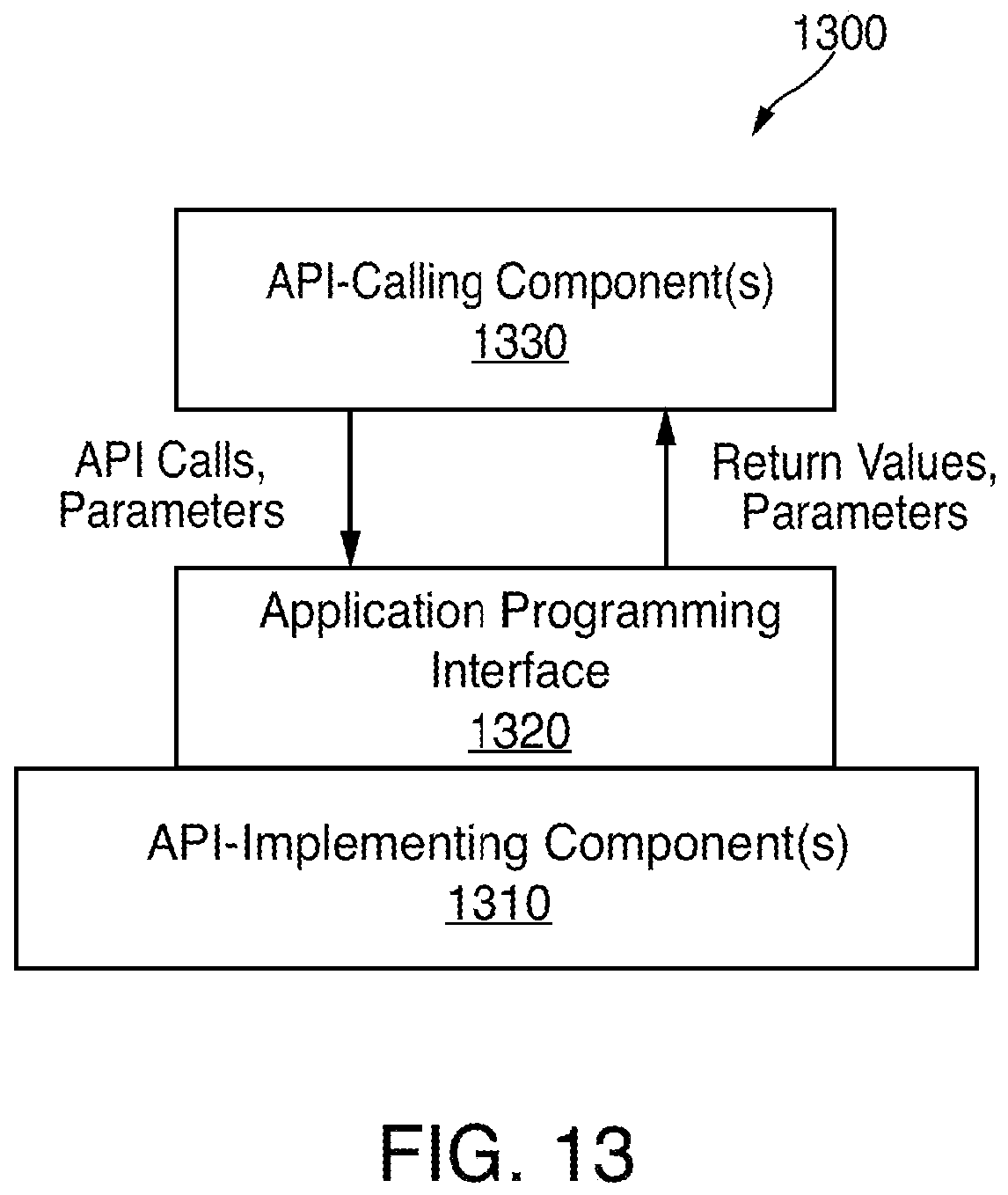 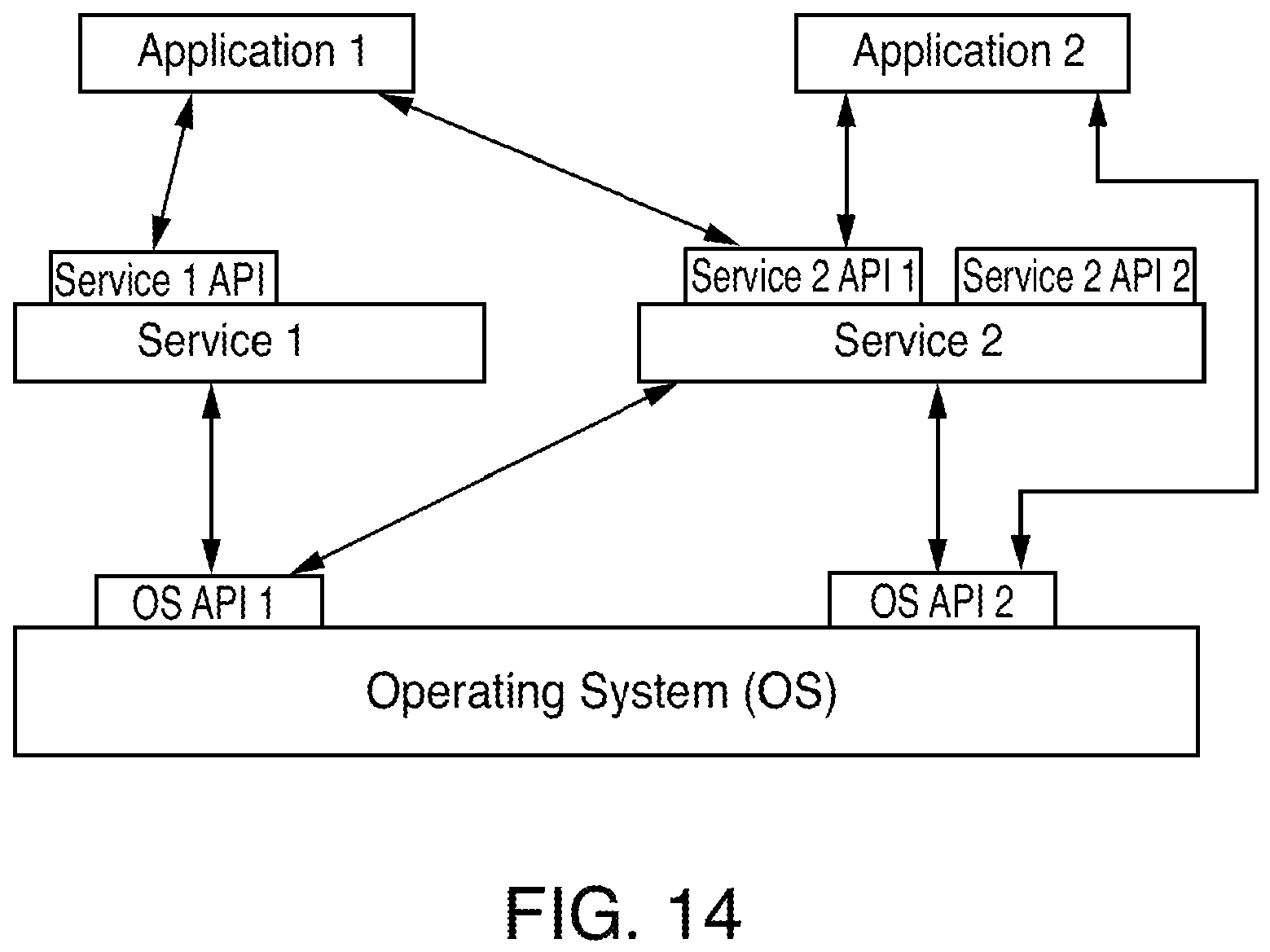