[0001] This disclosure relates to the field of odor screening for distinctive odors emitted by prohibited materials. More particularly, this disclosure relates to a method and apparatus for collecting odor samples from conveyances and supplying the odor samples to an inanimate odor detector for identification of target odors of prohibited materials.

[0002] There are many situations in which packages, pedestrians, vehicles and the like (conveyance) may be carrying materials which are prohibited from transport into or out of a designated area. Some examples are airports, sporting arenas and high security facilities. The prohibited materials may include, for example, explosives, drugs or even a product being stolen.
[0003] One method for screening for various materials is to individually search each conveyance for the prohibited material. Unfortunately, individual searching is extremely time-consuming and requires an inordinate number of searchers and an inordinate period of time.
[0004] It is known that many prohibited materials such as explosives and drugs emit odors which are distinctive and can be detected in very small quantities by specialized inanimate detectors which have been calibrated to identify such target odors. However, bringing expensive and often cumbersome detection equipment into direct contact with a large number of pedestrians and/or vehicles presents risks. Discrete placement of such equipment is important as well as the protection of the equipment itself, which is often expensive, and protection of personnel responsible for such equipment.
[0005] Thus is known an apparatus for detecting explosive substances published in US 4 202 200. This apparatus is provided with a passageway or tunnel for foot passengers, cars or other light vehicles, substantially in a single file. The tunnel is provided with two apertures at both sides and the apertures are connected with ducts outside of the tunnel in a symmetrical arrangement. Each duct is provided with a fan to generate an airflow through the ducts and the tunnel and a rotating pattern is set up in the middle of the tunnel. One or more vapour detectors are arranged in the ducts.
[0006] The WO 2006/08599 A1 discloses a detecting concealed security threats having in one embodiment a revolving door mechanism with security inspection system with an air source emitted from the floor, to pass over the people and luggage and then be captured in an air sampling device in a top portion or reverse.
[0007] From the US 2008/0250726 A1 is known a modular access system with portable containers and is provided with a control room between two or more passageways with revolving doors within a passing room. The passing room can include one or more security devices like metal detectors, x-ray scanners or explosive detectors and so on.
[0008] The US 4 045 997 describes a novel air curtain device suitable for use in detecting certain characteristic vapour emitted from objects positioned in the air curtain. The device produces an air curtain with laminar flow between two cabinets when an individual is positioned in a cabinet within the air curtain between the cabinets. The air curtain is generated by fans in one of the cabinets which draw air through grills into the another cabinet with vapour detectors inside.
[0009] From the US 2009/0248319 A1 are known some concepts for screening mail and parcels having a vapour concentrator and a sampling medium. The mail or parcel is positioned within a housing and a vapour and/or particle sample is collected and conveyed to a mass spectrometer and explosive detector.
[0010] Another explosive detection screening system is described in the US 5 345 809 B1. The system having a sampling chamber, a detection system and a control and data processing system for the detection of vapor emissions in a non-invasive manner so that the free passage of people and luggage is not unduly interrupted. The sampling means is a sampling chamber portal in which internally generated air flows sweep the vapor emissions emanating from particulates associated an individual object passing through the chamber to a collection area. Also disclosed is in another embodiment an automated baggage/parcel sampling chamber provided with some sampling heads and rotating brushes that sweep the exposed surfaces and introduce the particulates and any vapour emanating from the object into sample volume air.
[0011] In BECHER C ET AL: The detection of evaporating hazardous material released from moving sources a gas sensor network", SENSORS AND ACTUATORS B: CHEMICAL INTERNATIONAL JOURNAL DEVOTED TO RESARCH AND DEVELOPMENT OF PHYSICAL AND CHEMICAL TRANSDUCERS, ELSEVIER S.A., CH, vol. 146, no 2, 29 April 2010 (2010-04-29), pages 513-520, XP027020557, ISSN: 0925-4005 [retrieved on 2010-01-06] is described a security assistance system with a plurality of sensors on goose necks. This allows adjusting the position of the sensor within an air stream for better sensor results.
[0012] What is needed, therefore, is a reliable and consistent system to screen persons or conveyances and obtain consistent positive identifications of prohibited material while achieving, for example, some or all of the goals listed above.

[0013] Further features, aspects, and advantages of the present disclosure will become better understood by reference to the following detailed description, appended claims, and accompanying figures, wherein elements are not to scale so as to more clearly show the details, wherein like reference numbers indicate like elements throughout the several views, and wherein:

FIG. 2A shows a somewhat schematic side view of a conduit and some security features associated therewith;

FIG. 3 shows a somewhat schematic side view of a target odor detection apparatus;

FIG. 4A shows a somewhat schematic side view of a target odor detection apparatus;

FIG. 4B shows a somewhat schematic side view of the target odor detection apparatus shown in FIG. 4A;

FIG. 6 shows a somewhat schematic side view of a screening station;

FIG. 7 shows a somewhat schematic side view of a target odor detection apparatus;

FIG. 8B shows a somewhat schematic side view of the mobile target odor detection apparatus shown in FIG. 8A;

FIG. 9 shows a somewhat schematic side view of a target odor detection apparatus; and 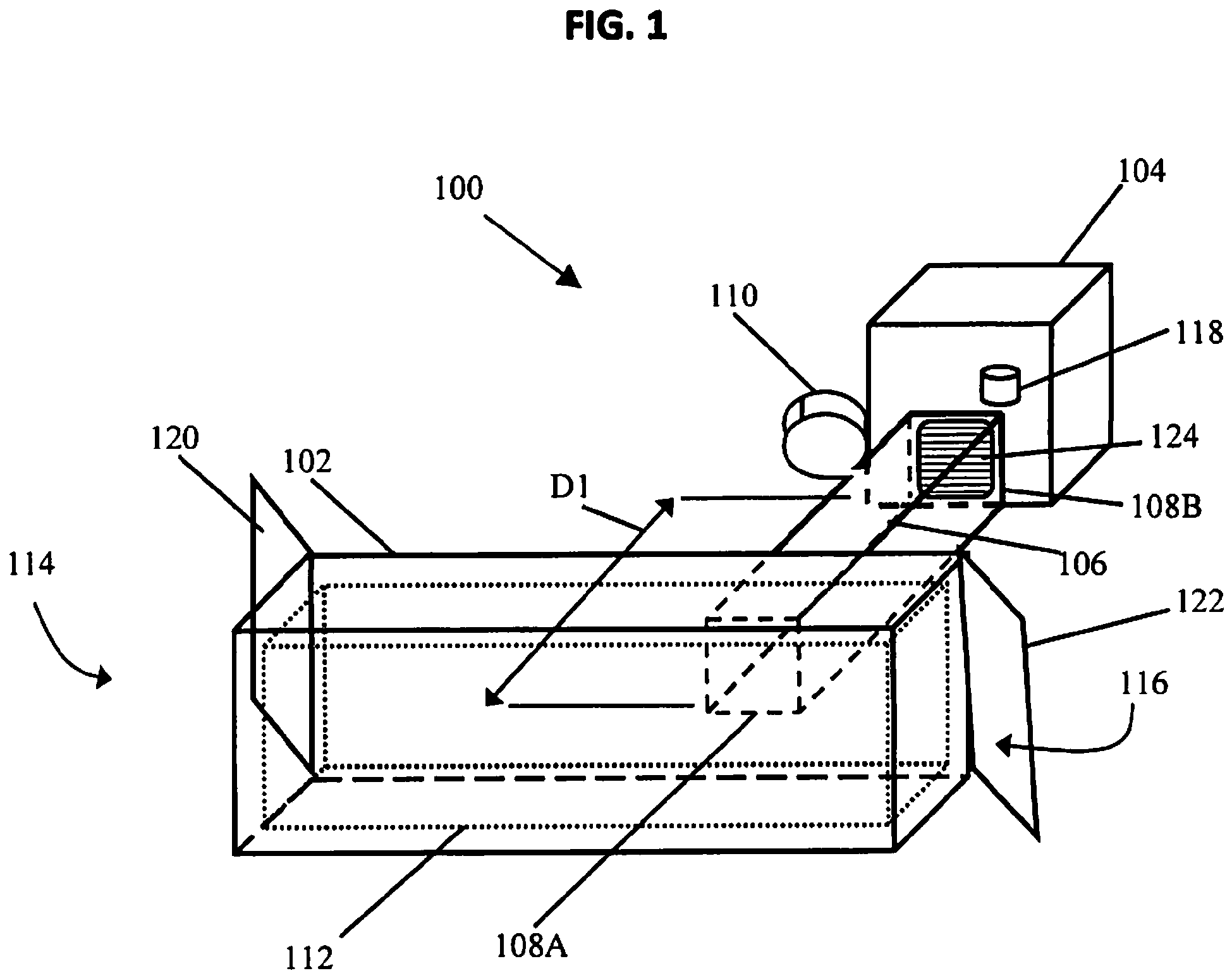 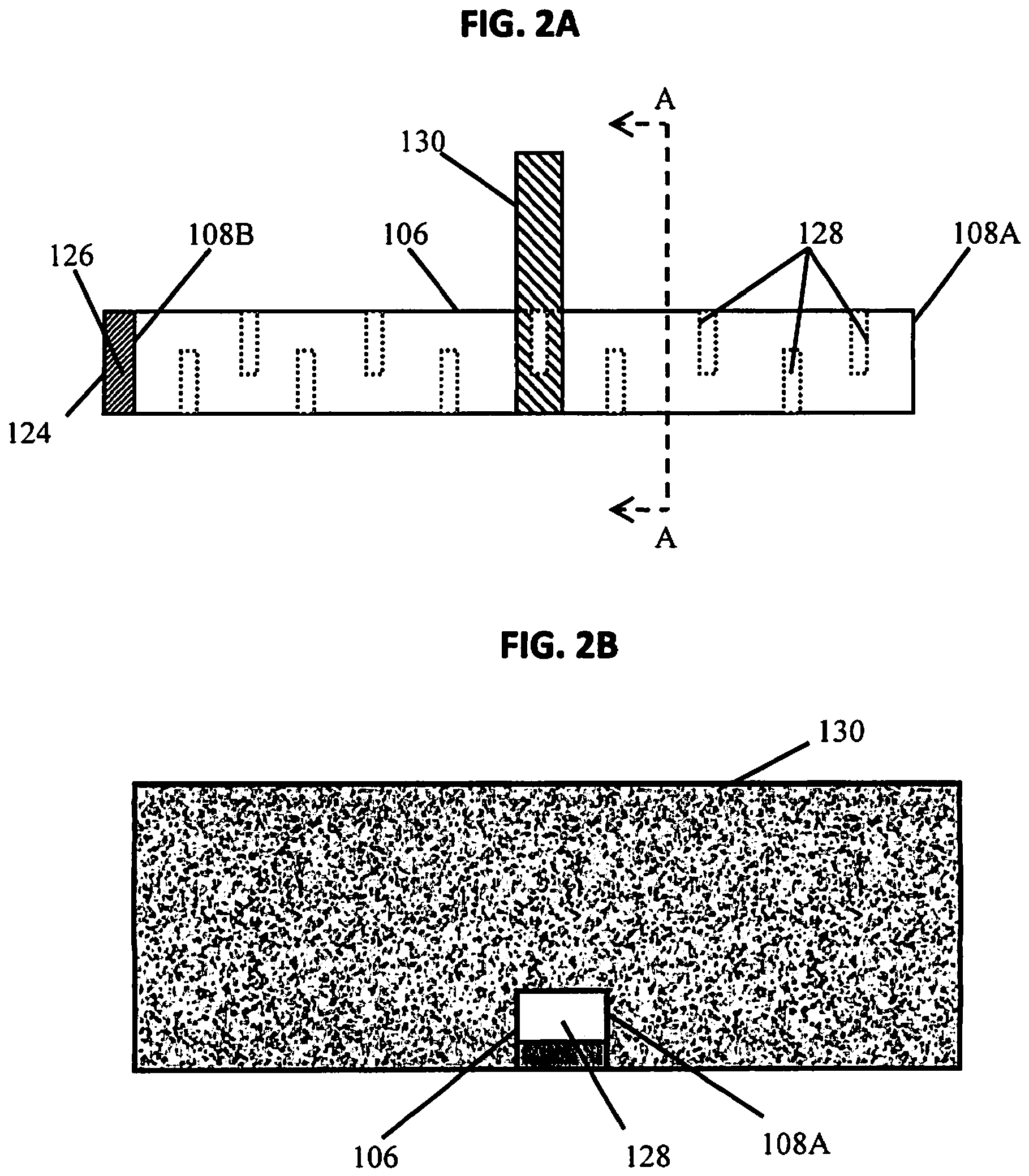 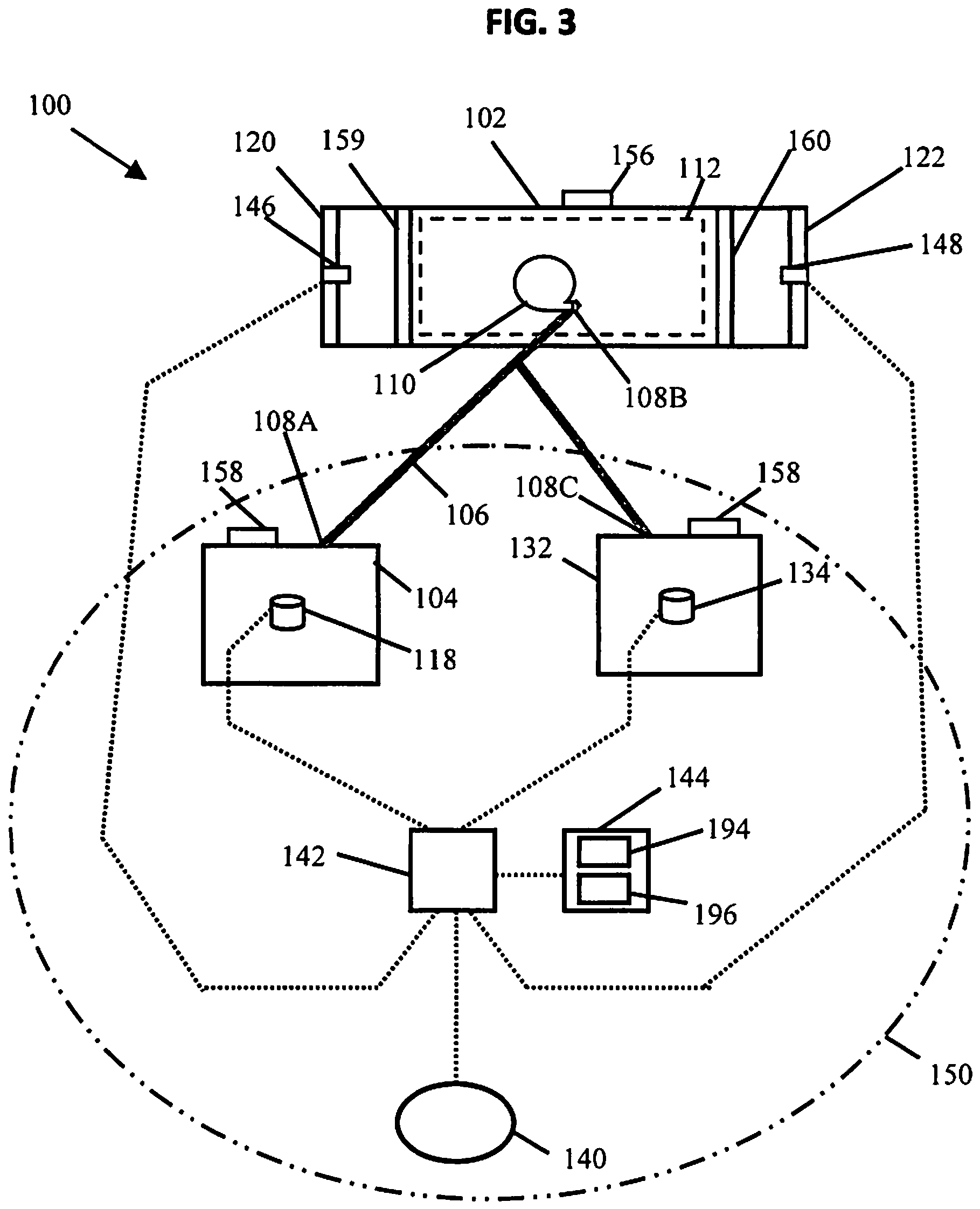 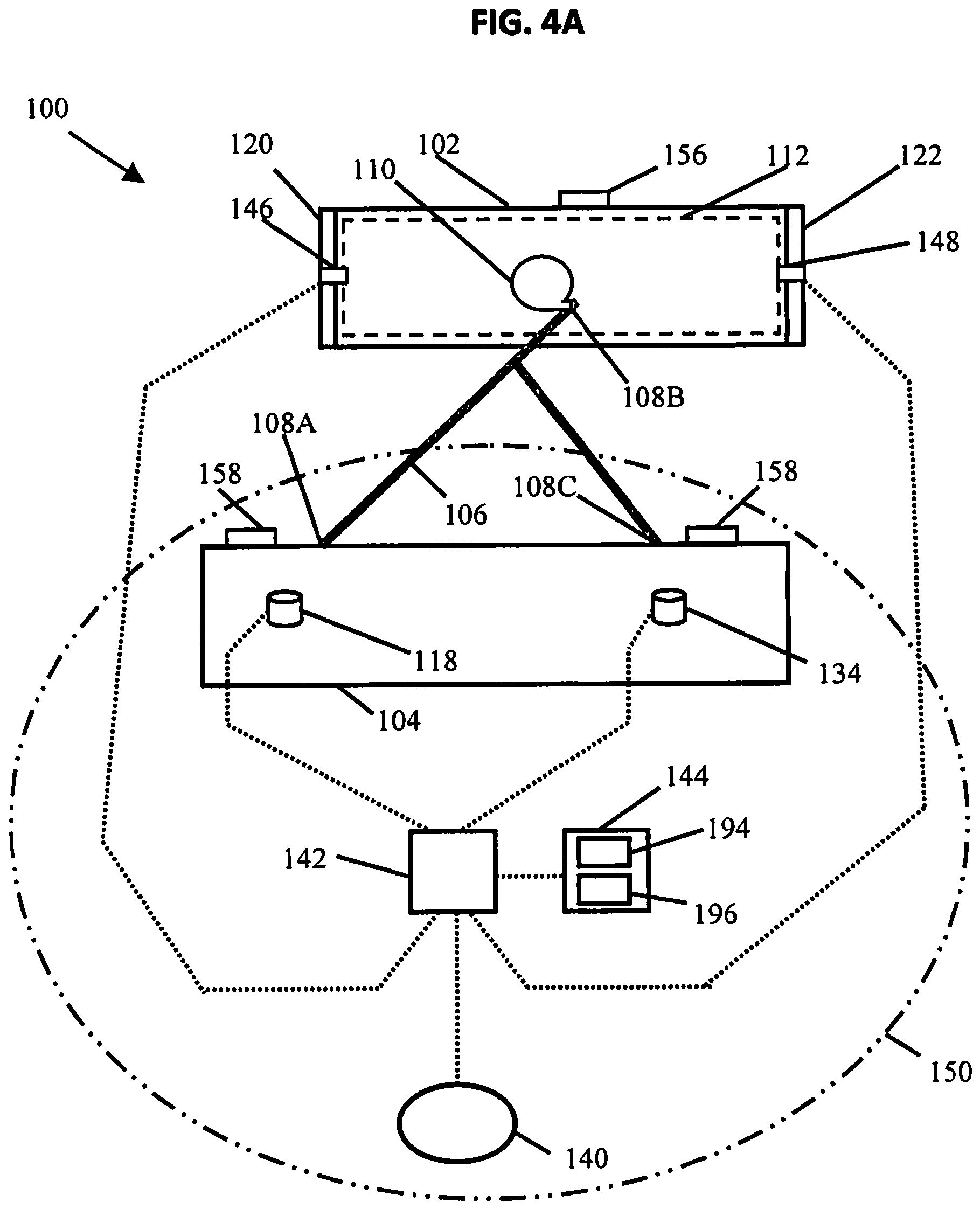 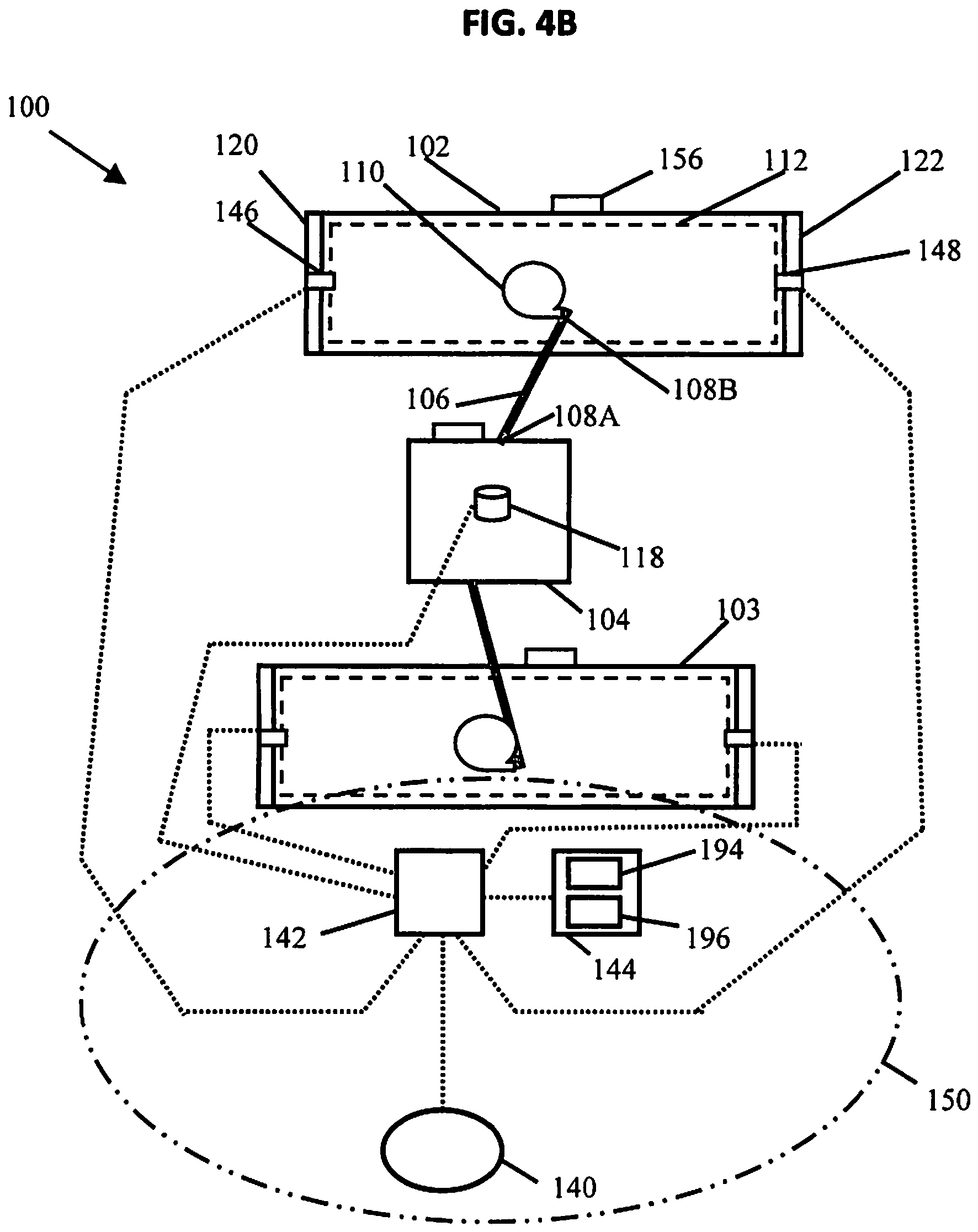 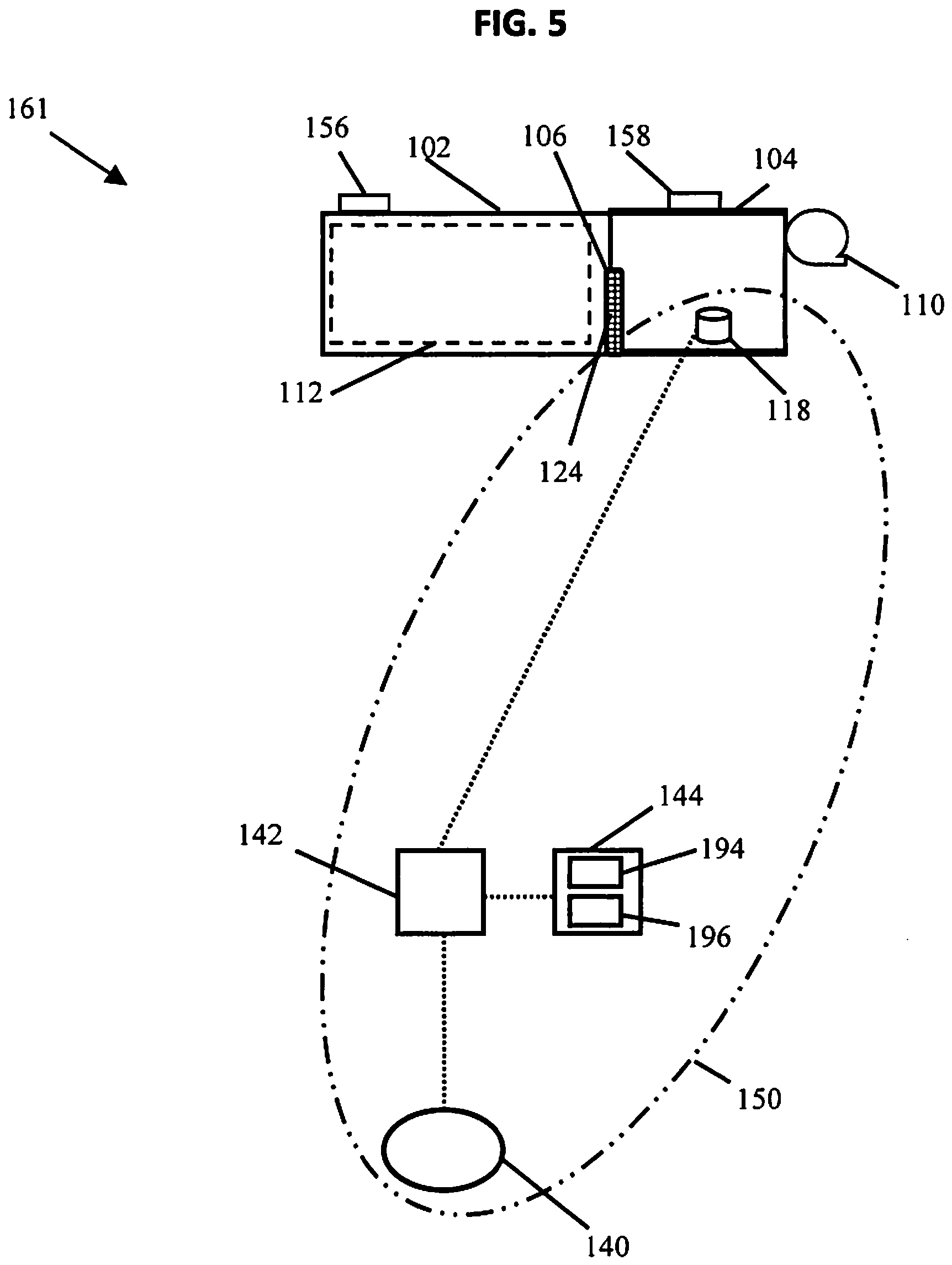 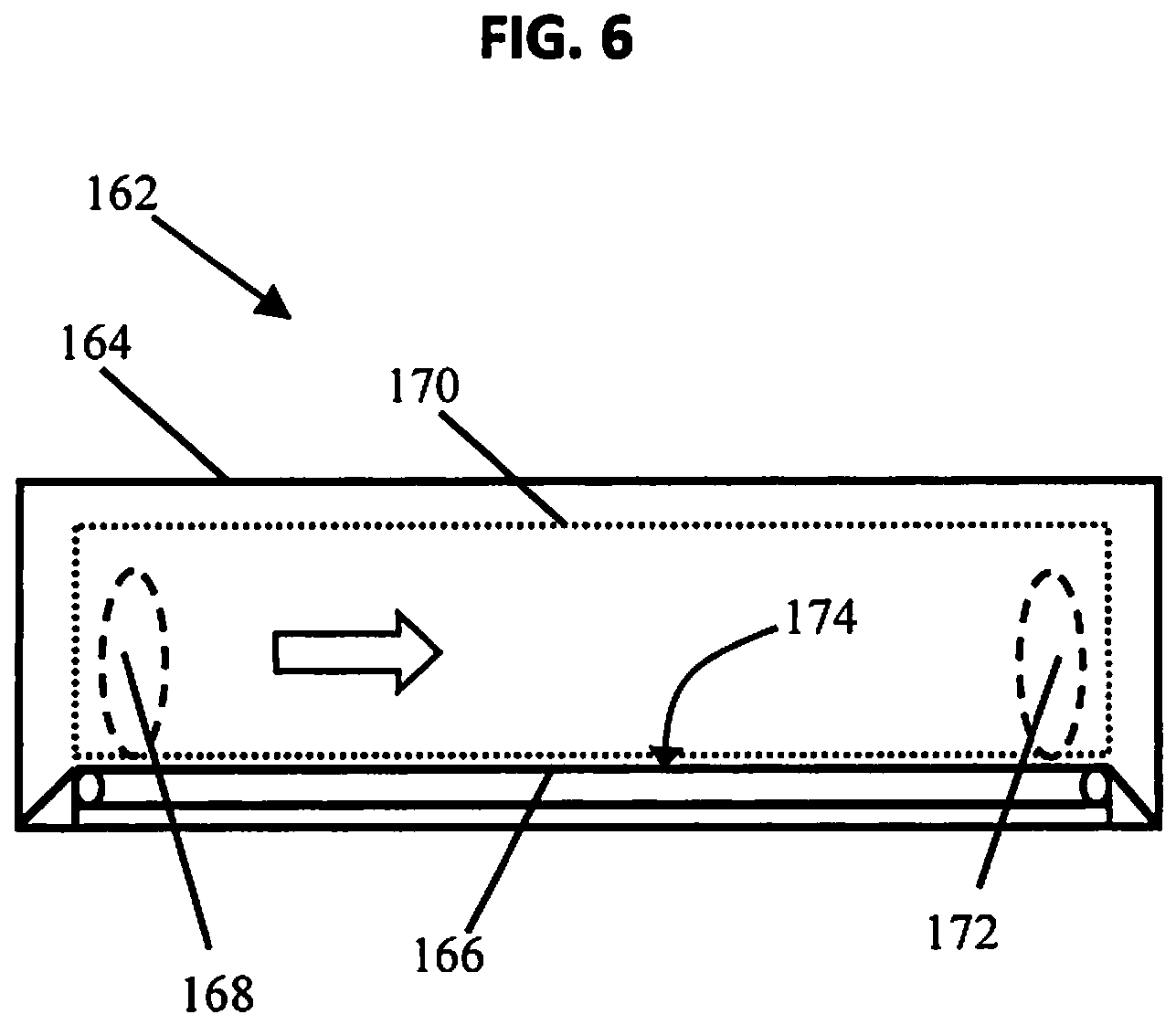 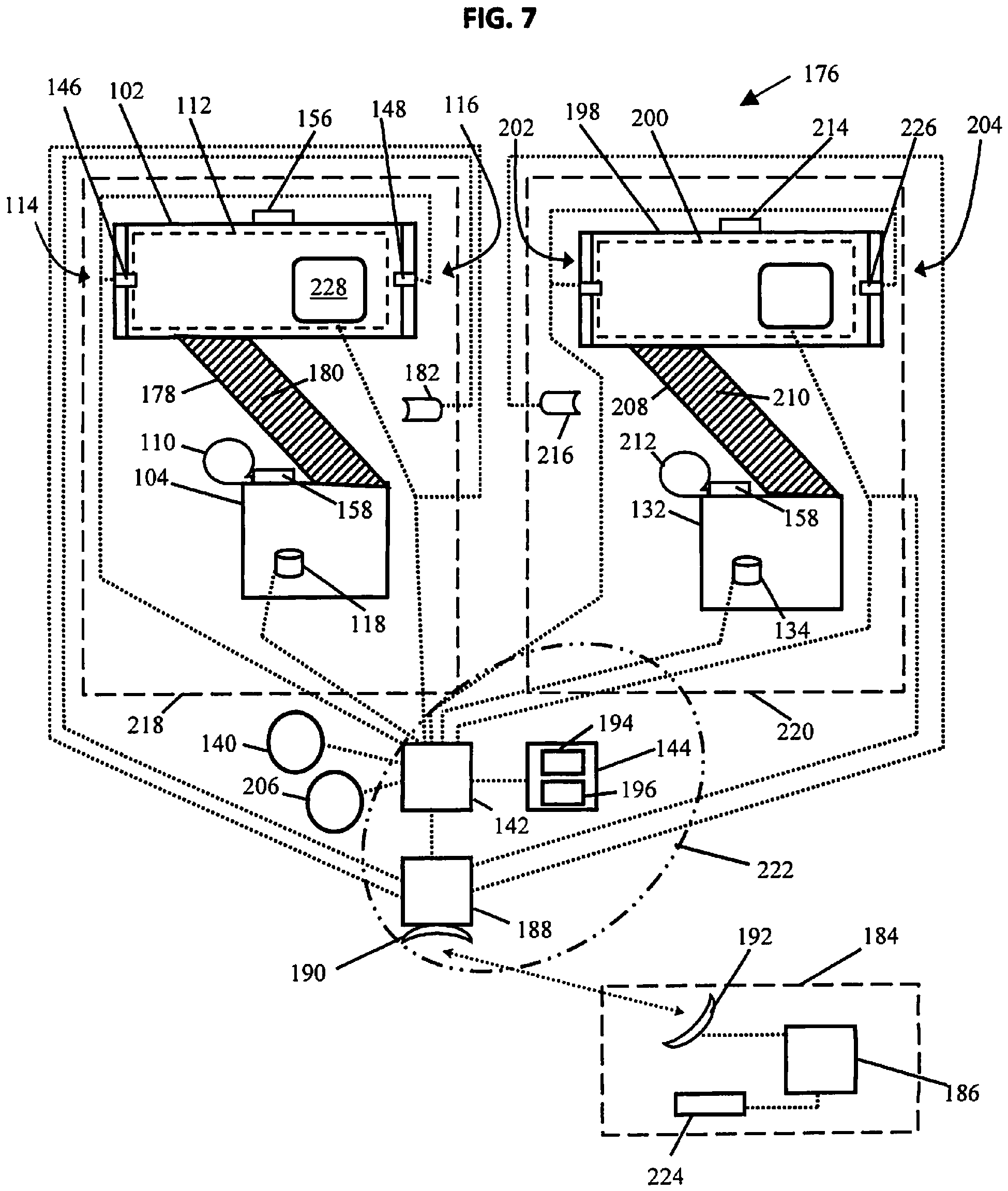 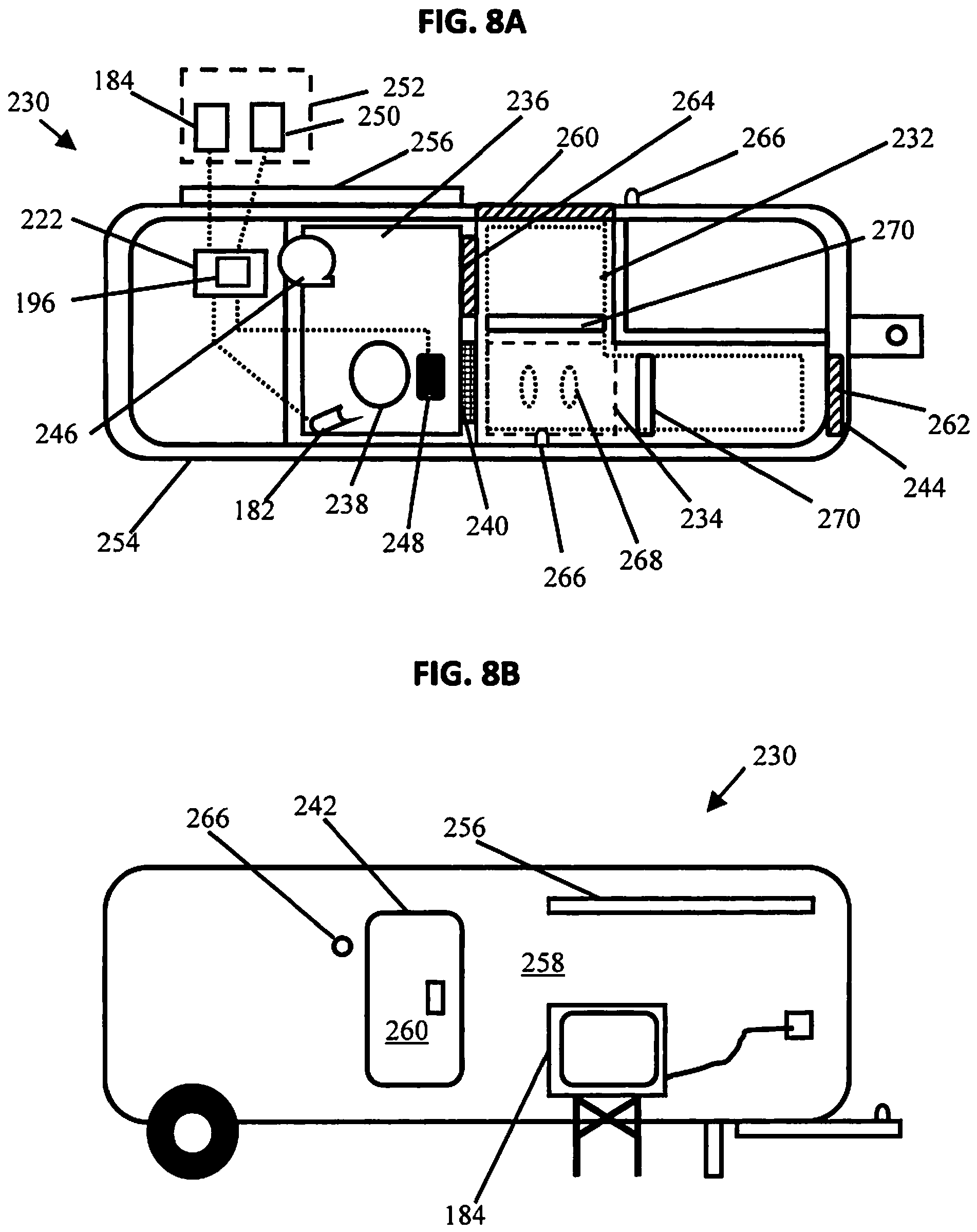 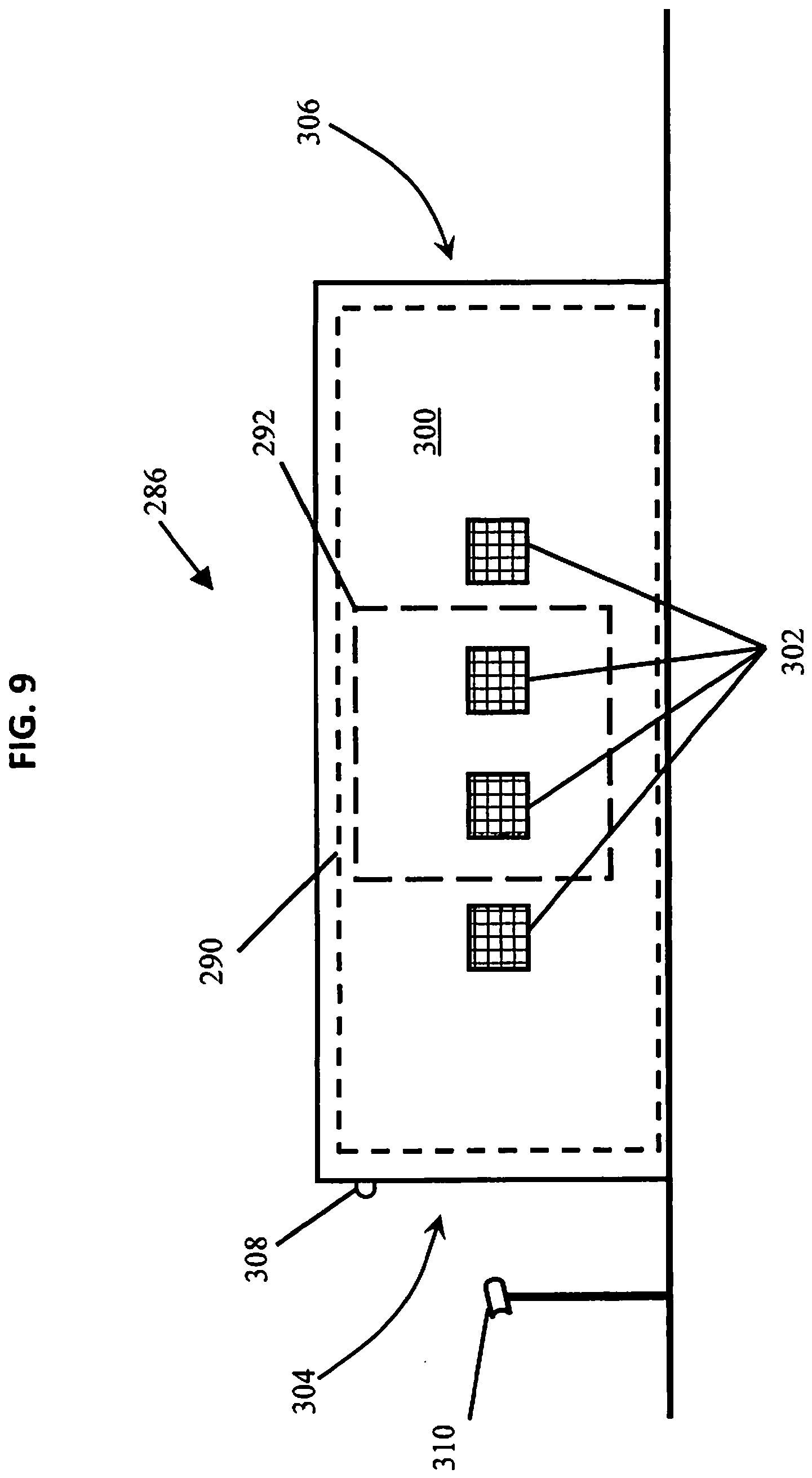 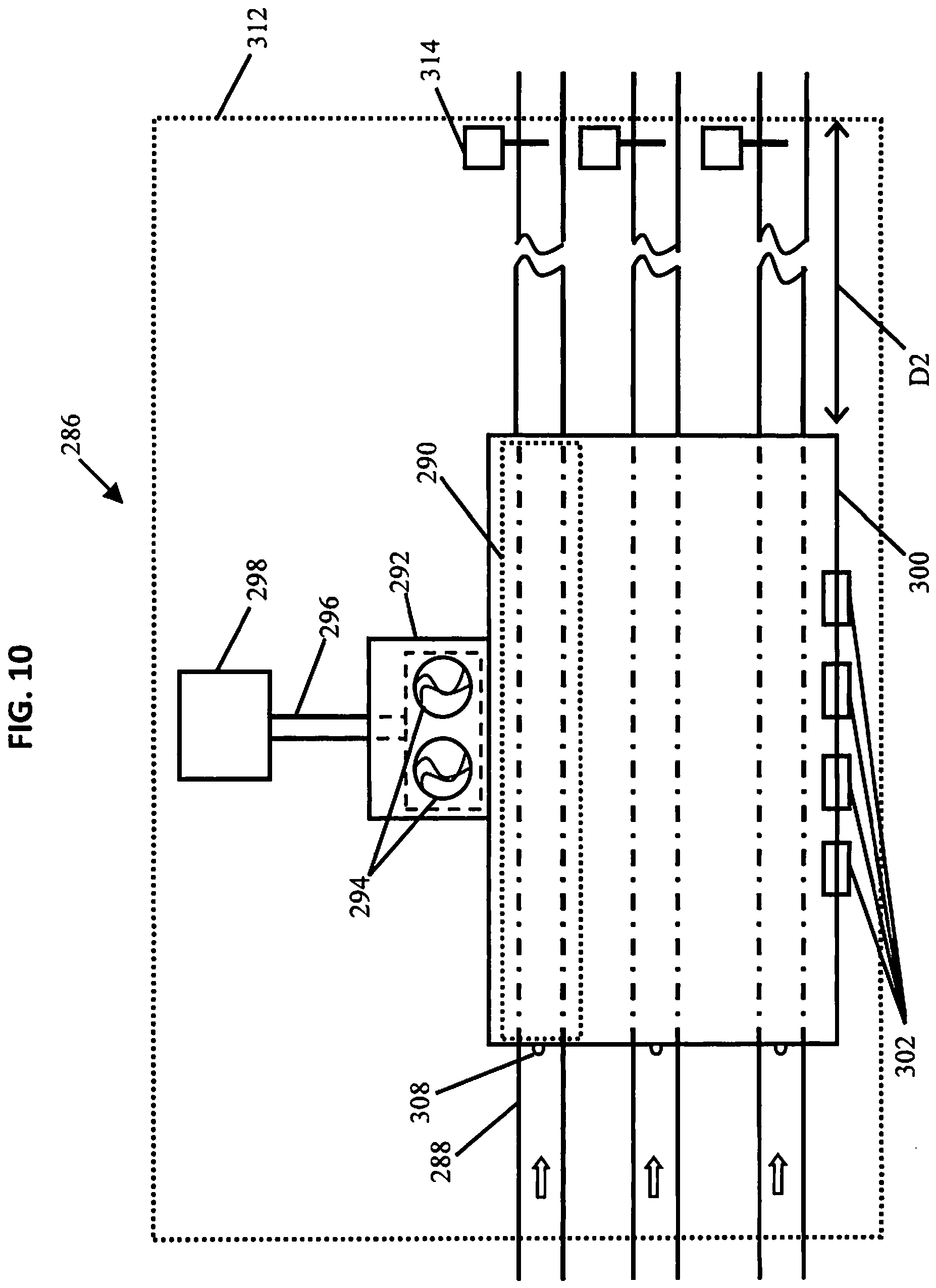