[0002] The present description is related, generally, to multi-radio techniques and, more specifically, to coexistence techniques for multi-radio devices.

[0003] Wireless communication systems are widely deployed to provide various types of communication content such as voice, data, and so on. These systems may be multiple-access systems capable of supporting communication with multiple users by sharing the available system resources (e.g., bandwidth and transmit power). Examples of such multiple access systems include code division multiple access (CDMA) systems, time division multiple access (TDMA) systems, frequency division multiple access (FDMA) systems, 3GPP Long Term Evolution (LTE) systems, and orthogonal frequency division multiple access (OFDMA) systems.
[0004] Generally, a wireless multiple-access communication system can simultaneously support communication for multiple wireless terminals. Each terminal communicates with one or more base stations via transmissions on the forward and reverse links. The forward link (or downlink) refers to the communication link from the base stations to the terminals, and the reverse link (or uplink) refers to the communication link from the terminals to the base stations. This communication link may be established via a single-in-single-out, multiple-in-single-out or a multiple-in-multiple out (MIMO) system.
[0005] Some conventional advanced devices include multiple radios for transmitting/receiving using different Radio Access Technologies (RATs). Examples of RATs include, e.g., Universal Mobile Telecommunications System (UMTS), Global System for Mobile Communications (GSM), cdma2000, WiMAX, WLAN (e.g., WiFi), Bluetooth, LTE, and the like.
[0006] An example mobile device includes an LTE User Equipment (UE), such as a fourth generation (4G) mobile phone. Such 4G phone may include various radios to provide a variety of functions for the user. For purposes of this example, the 4G phone includes an LTE radio for voice and data, an IEEE 802.11 (WiFi) radio, a Global Positioning System (GPS) radio, and a Bluetooth radio, where two of the above or all four may operate simultaneously. While the different radios provide useful functionalities for the phone, their inclusion in a single device gives rise to coexistence issues. Specifically, operation of one radio may in some cases interfere with operation of another radio through radiative, conductive, resource collision, and/or other interference mechanisms. Coexistence issues include such interference.
[0007] This is especially true for the LTE uplink channel, which is adjacent to the Industrial Scientific and Medical (ISM) band and may cause interference therewith It is noted that Bluetooth and some Wireless LAN (WLAN) channels fall within the ISM band. In some instances, a Bluetooth error rate can become unacceptable when LTE is active in some channels of Band 7 or even Band 40 for some Bluetooth channel conditions. Even though there is no significant degradation to LTE, simultaneous operation with Bluetooth can result in disruption in voice services terminating in a Bluetooth headset. Such disruption may be unacceptable to the consumer. A similar issue exists when LTE transmissions interfere with GPS. Currently, there is no mechanism that can solve this issue since LTE by itself does not experience any degradation
With reference specifically to LTE, it is noted that a UE communicates with an evolved NodeB (eNB; e.g., a base station for a wireless communications network) to inform the eNB of interference seen by the UE on the downlink. Furthermore, the eNB may be able to estimate interference at the UE using a downlink error rate. In some instances, the eNB and the UE can cooperate to find a solution that reduces interference at the UE, even interference due to radios within the UE itself. However, in conventional LTE, the interference estimates regarding the downlink may not be adequate to comprehensively address interference.
[0008] In one instance, an LTE uplink signal interferes with a Bluetooth signal or WLAN signal. However, such interference is not reflected in the downlink measurement reports at the eNB. As a result, unilateral action on the part of the UE (e.g., moving the uplink signal to a different channel) may be thwarted by the eNB, which is not aware of the uplink coexistence issue and seeks to undo the unilateral action. For instance, even if the UE re-establishes the connection on a different frequency channel, the network can still handover the UE back to the original frequency channel that was corrupted by the in-device interference. This is a likely scenario because the desired signal strength on the corrupted channel may sometimes be higher be reflected in the measurement reports of the new channel based on Reference Signal Received Power (RSRP) to the eNB. Hence, a ping-pong effect of being transferred back and forth between the corrupted channel and the desired channel can happen if the eNB uses RSRP reports to make handover decisions.
[0009] Other unilateral action on the part of the UE, such as simply stopping uplink communications without coordination of the eNB may cause power loop malfunctions at the eNB. Additional issues that exist in conventional LTE include a general lack of ability on the part of the UE to suggest desired configurations as an alternative to configurations that have coexistence issues. For at least these reasons, uplink coexistence issues at the UE may remain unresolved for a long time period, degrading performance and efficiency for other radios of the UE.
[0010] US 2010/0265856 A1 discloses a method for enabling coexistence between a Bluetooth transceiver and a broadband wireless access network (BWAN) transceiver. The BWAN transceiver is configured to transmit a reservation request to a BWAN base station to reserve an amount of time during which no uplink transmissions are scheduled. The reservation request is configured to allow the Bluetooth transceiver to receive packets from a Bluetooth device without interference from transmissions by the BWAN transceiver.
[0011] EP 2 157 826 A2 discloses a method for sleep mode signaling for a multistandard system with Bluetooth. A first communication system determines one or more timeslots during which it may be inactive. A second communication system may receive a synchronization signal from the first communication system and determine timeslots during which the first communication system is inactive based on the synchronization signal. The second communication system may transmit and/or receive at times that are scheduled based on the determination.

[0016] The features, nature, and advantages of the present disclosure will become more apparent from the detailed description set forth below when taken in conjunction with the drawings in which like reference characters identify correspondingly throughout.

FIGURE 1 illustrates a multiple access wireless communication system according to one aspect.

FIGURE 2 is a block diagram of a communication system according to one aspect.

FIGURE 6 is a block diagram of an example design for a multi-radio wireless device.

FIGURE 7 is graph showing respective potential collisions between seven example radios in a given decision period.

FIGURE 8 is a diagram showing operation of an example Coexistence Manager (CxM) over time.

FIGURE 10 is a block diagram of a system for providing support within a wireless communication environment for multi-radio coexistence management according to one aspect of the present disclosure.

FIGURE 11 is a diagram illustrating unaligned LTE and Bluetooth frames.

FIGURE 12 is a diagram illustrating aligned LTE and Bluetooth frames according to one aspect of the present disclosure.

FIGURE 13 is a diagram illustrating unaligned LTE and Bluetooth frames.

FIGURE 14 is a diagram illustrating aligned LTE and Bluetooth frames according to one aspect of the present disclosure.

FIGURE 15 is a block diagram illustrating frame alignment according to one aspect of the present disclosure.

FIGURE 16 is a diagram illustrating an apparatus for frame alignment according to one aspect of the present disclosure.

1. A method for wireless communications, comprising:

determining (1502) a frame timing of communications of a first radio access technology, RAT;

6. The method of claim 1, wherein the frame timing of the first RAT is imposed on communications of the second RAT.

7. An apparatus (1600) for wireless communication, comprising:

means (1602) for determining a frame timing of communications of a first radio access technology, RAT;

12. The apparatus of claim 7, wherein the frame timing of the first RAT is imposed on communications of the second RAT.

13. A computer program product comprising instructions which, when the program is executed by a computer, cause the computer to carry out the method of any of claims 1 to 6. 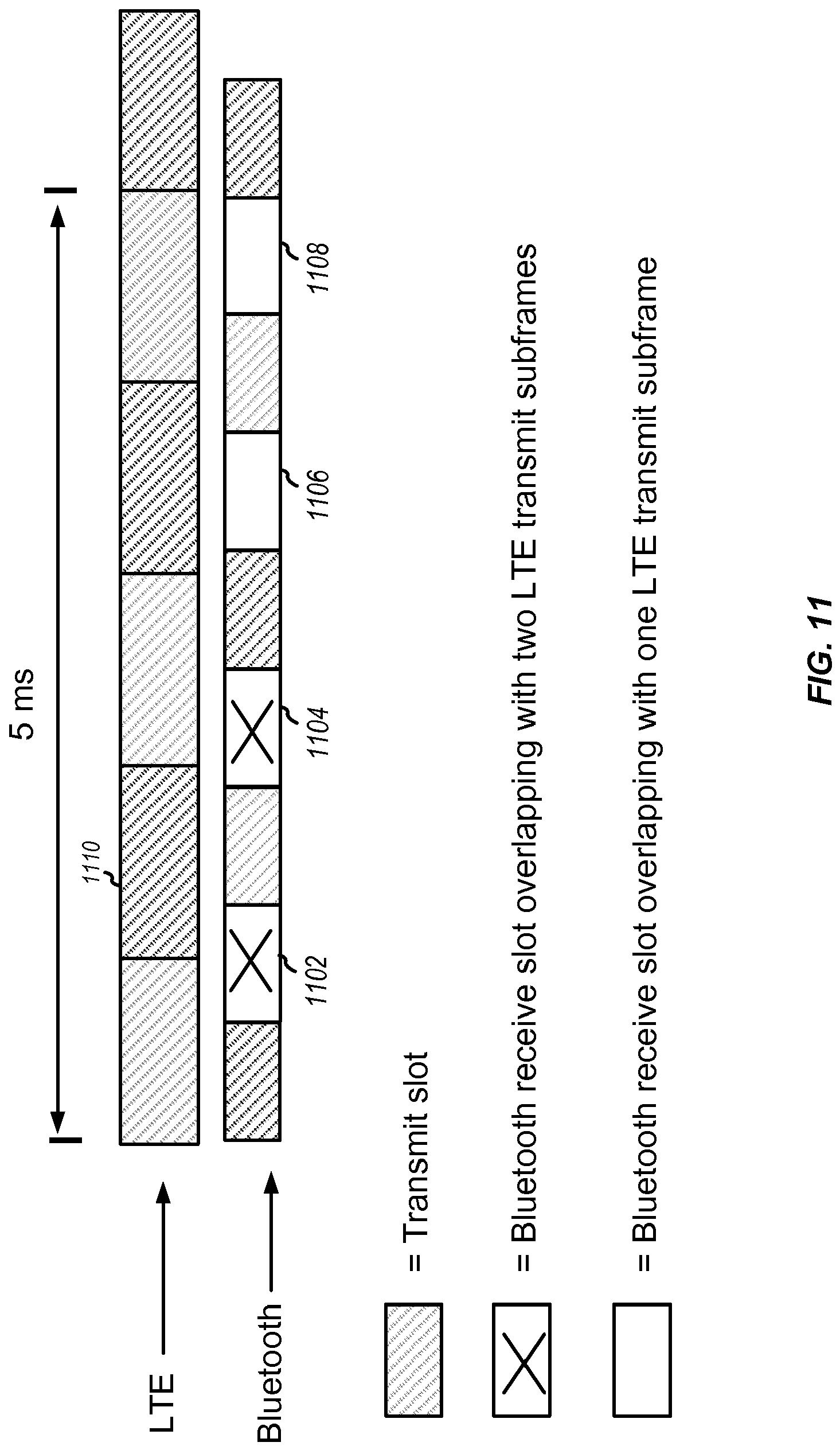