The Technical Field of the Invention

[0001] The present invention relates to transport of oil and gas at sea, more specifically a device as specified in the preamble of the independent claims.
[0002] In more detail, the invention relates to installation and operation of a harbour plant for storage and loading or unloading of hydrocarbons, such as liquefied natural gas at a distance from the shore in shallow waters, where the alternative is to build storage installations for liquefied natural gas on shore or as a moored, floating installation.
[0003] In particular, the invention relates to a harbour plant for storage, loading and unloading of hydrocarbon products at sea, comprising a number of units resting on a seabed due to gravity and extending a distance up above sea level, having a vertical front surface on the windward side facing the incoming waves and an opposite vertical leeward surface, along which a vessel is intended to be moored, the units being placed at a given distance apart in sideways direction, the units forming intermediate, free passage(s) between adjacent units in a direction of incoming waves, allowing parts of the incoming waves to pass unhindered through the passage(s), while the vertical front surface of the units to dampen other parts of the incoming waves, , the sideways distances (Q) between two neighbouring units being governed by the frequency of the waves to be dampened and the frequencies of the waves allowed to pass in between the units,
[0004] The invention relates also to a method for establishing a mooring configuration for vessels, utilizing the storage unit(s) as basis for mooring, meeting the international requirements set out in international conventions, such mooring plant being intended to be placed on a coastal or offshore site, the mooring system being dimensioned to resist mooring forces and all other requirements of international mooring conventions.
[0005] In the following, the common designation of LNG (Liquefied Natural Gas) is used for natural gas that is cooled down to a liquid state. It is common to cool methane to about -161 degrees Celsius, but the invention is also applicable to other types of petroleum products, such as chilled gases such as ethane, methane, propane and butane. In addition, the invention can be used for storage, loading and unloading of oil and oil products.

[0006] Harbour sites for LNG- or large oil tankers are considered to be very hazardous. Therefore, it is not advantageous to place the sites in the vicinity of populated areas. At the same time, the biggest consumers of LNG are found in propane and butane. In addition, the invention can be used for storage, loading and unloading of oil and oil products.

Short Description of the Drawings

[0071] The device according to the invention can be explained in more detail in the following description with reference to the enclosed figures, wherein:

Figures 1 shows schematically a view seen from above of a harbour site not being part of the invention; where three units are placed a distance apart on the seabed, the middle one being positioned in a retracted position with regard to the wave direction;

Figure 3 shows schematically a view seen from above of another harbour site, not being part of the invention, corresponding to the embodiment shown in Figure 1, wherein the units forming the harbour plant are provided with additional mooring and/or wave breaking or damping means;

Figure 4 shows schematically a vertical section in longitudinal direction of the units shown in Figure 3, seen along the line 4-4 in Figure 3;

Figure 6 shows schematically a side view of a unit provided with ice breaking buffering structures on two opposite sides of a unit;

Figure 7 shows schematically a side view of a plant unit according to the present invention, also indicated schematically a vessel moored to the unit, the Figure indicating the direction of the mooring hawser; and

Figure 8 shows schematically another configuration of the units forming the plant,

Detailed Description of the Figures

placing at least three units (11) standing on their own a distance (Q) apart and displacing one (11') of the at least three units (11) offset in a lateral direction with respect to the neighbouring unit(s) (11) away from the predominantly direction of the incoming waves, so that the harbour site dampens a part of the incoming waves while other waves pass through the harbour site,

12. Method according to claim 11, wherein the distance (Q) between the units (9) is determined with the help of the following steps:

to measure the wave height in a desired area over a period of time,

to create a wave spectrum of measured wave heights,

to calculate a statistical distribution of the wave spectrum

to determine the average wave height according to the normal distribution of the wave spectrum, and

to determine the distance between the units according to the value of the average wave height. 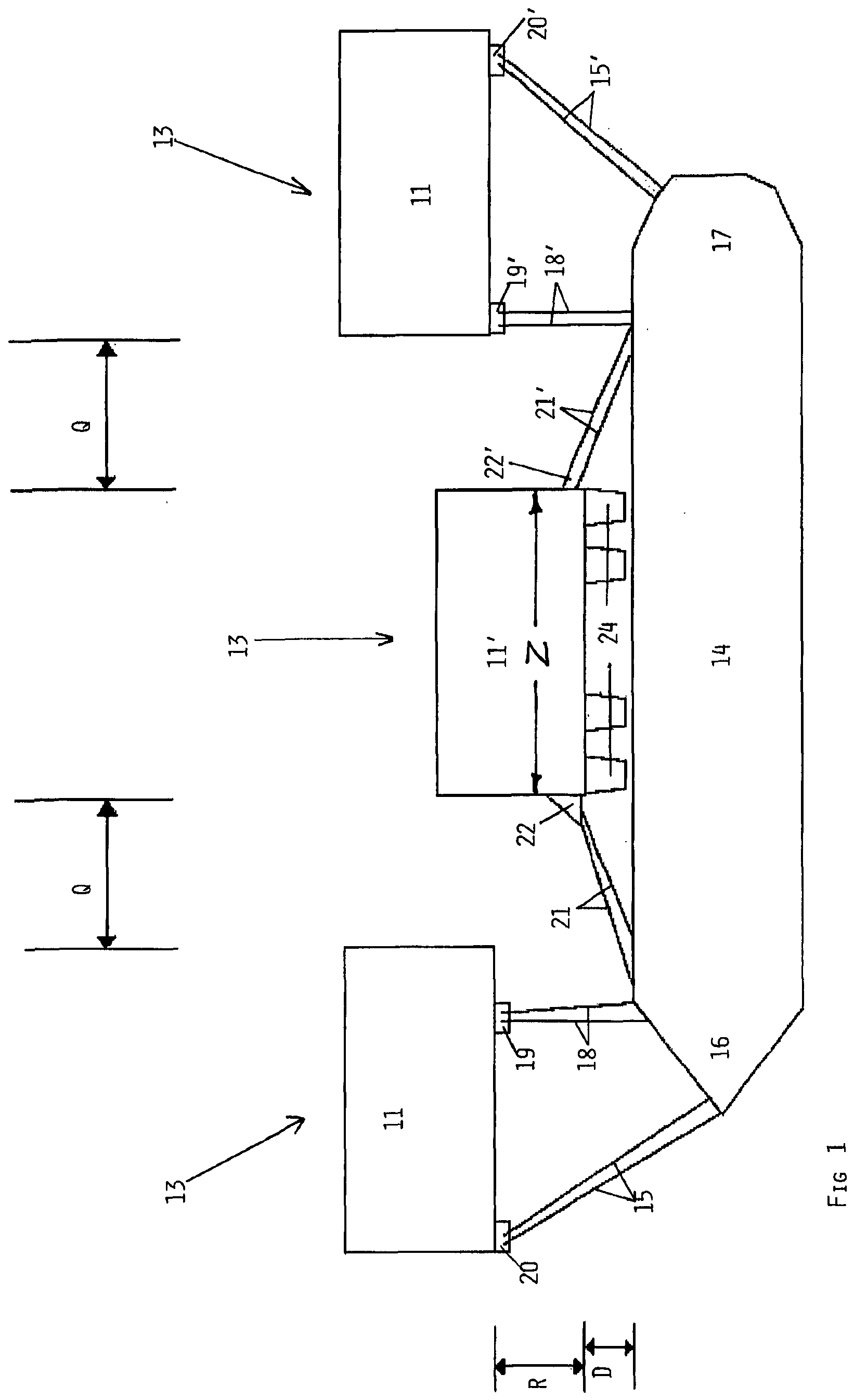 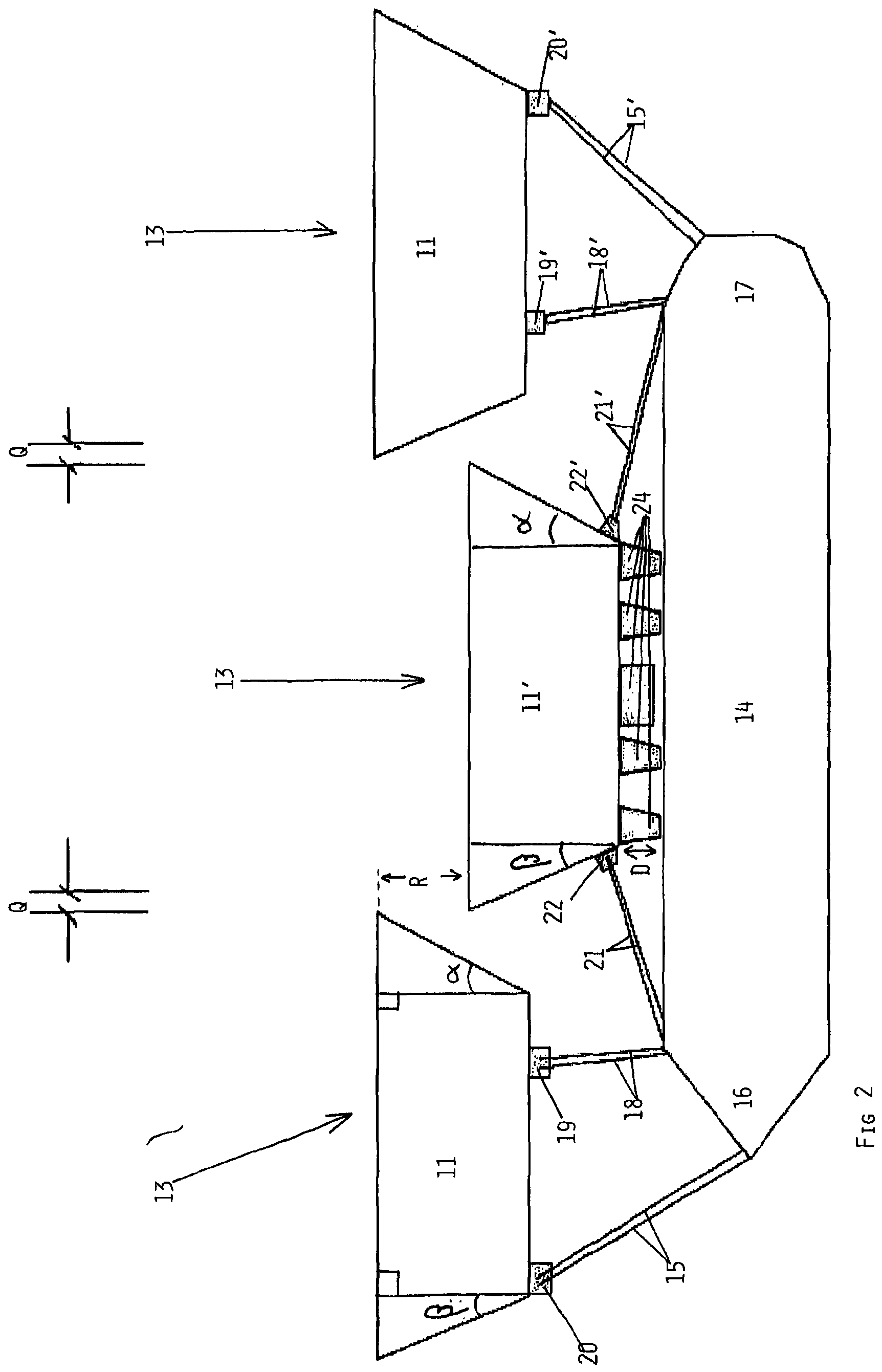 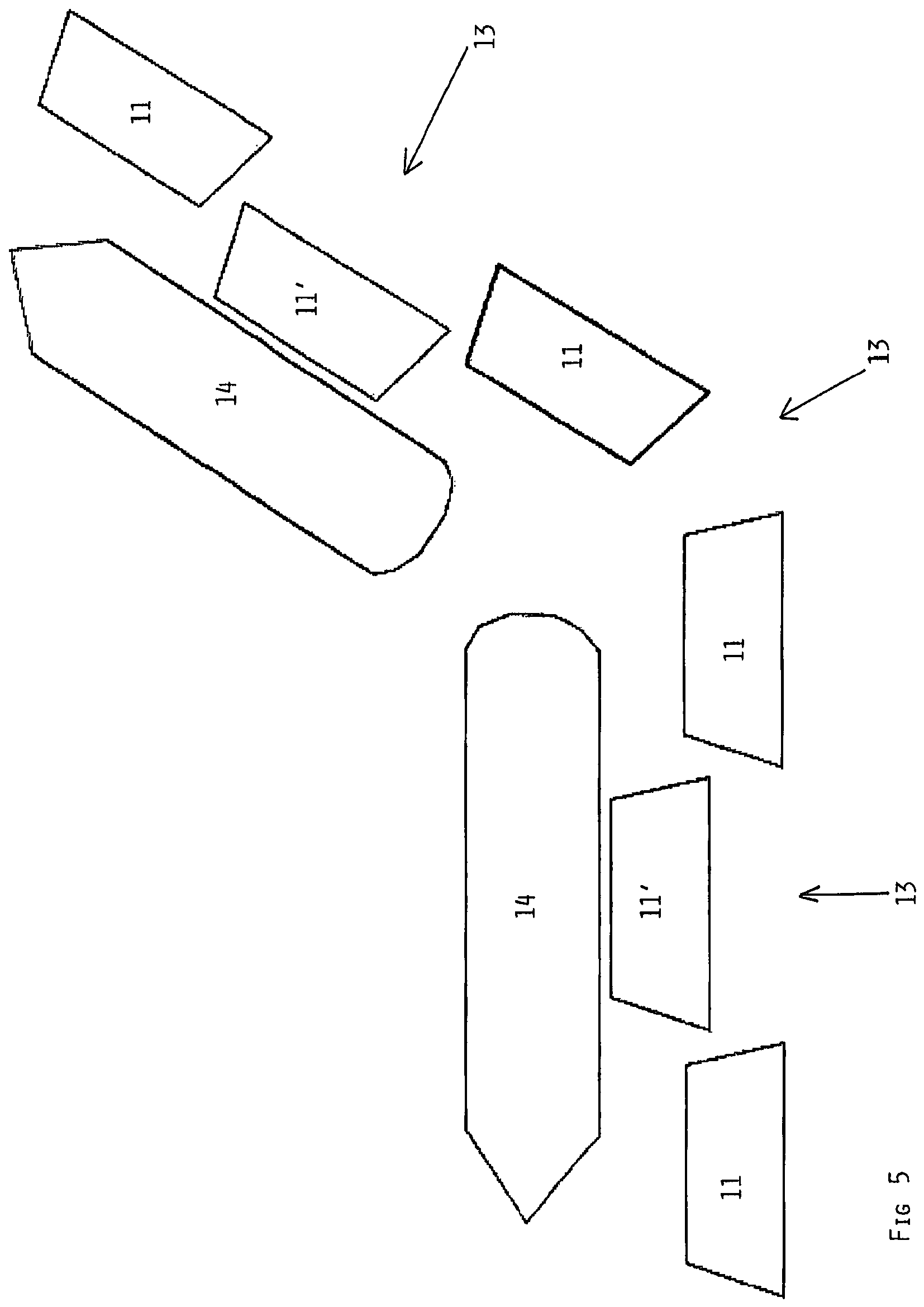 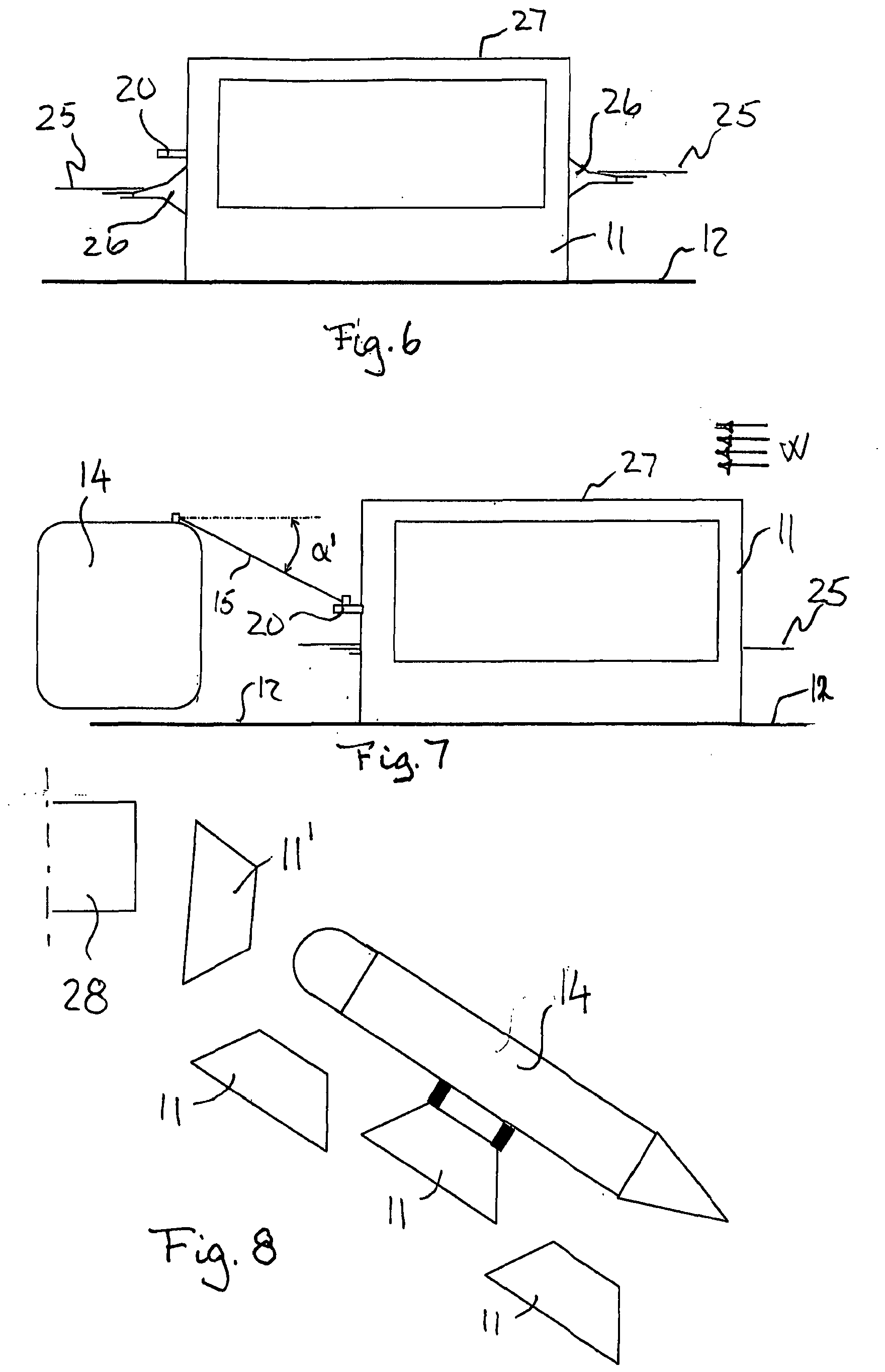