[0015] In the following text, the visible surface of the installed floor panel is called "front face", while the opposite side of the floor panel, facing the sub floor, is called "rear face". The edge between the front and rear face is called "joint edge". If not defined otherwise upper and lower means towards the front face and towards the rear face. Inner and outer means towards or away from the centre of the panel. By "horizontal plane" is meant a plane, which extends parallel to the outer part of the surface layer. Immediately juxtaposed upper parts of two adjacent joint edges of two joined floor panels together define a "vertical plane" perpendicular to the horizontal plane. By "horizontally" is meant parallel with the horizontal plane and by "Vertically" parallel to the vertical plane.
[0016] By "joint" or "locking system" are meant co acting connecting means, which connect the floor panels vertically and/or horizontally. By "mechanical locking system" is meant that joining can take place without glue. Mechanical locking systems can in many cases also be combined with gluing. By "integrated with" means formed in one piece with the panel or factory connected to the panel. By "separate" parts, components element and similar is meant that they are produced separately and not in one piece with the core or the main body of the panel. Separate parts are generally factory connected and integrated with the panel but they could be supplied as lose parts, which are intended to be used during installation of panels.
[0017] By a "flexible tongue" is meant a separate tongue which has at least some flexible parts and which has a length direction along the joint edges and which is forming a part of the vertical locking system. The whole tongue could for example be bendable or it could have flexible and resilient parts that can be bent and/or compressed and that could at least partly spring back to or towards its initial position. The flexibility causes the tongue to be displaced at least partly horizontally during locking. Flexible tongue is used in this document broadly since most of the shown embodiments have at least some flexible parts. The invention does not exclude a flexible tongue, which essentially or partly is made of a rigid material.
[0018] By a "displaceable tongue" is meant any type of a tongue which connects adjacent edges vertically and which is made of a separate material and connected to a floor panel and which is wholly or partly displaceable between an unlocked position and a locked position. A displaceable tongue could be flexible or rigid
[0019] By "tongue" is meant any part in an edge section that prevents a vertical displacement.
[0020] By "angling" is meant a connection that occurs by a turning motion, during which an angular change occurs between two parts that are being connected, or disconnected. When angling relates to connection of two floor panels, the angular motion takes place with the upper parts of joint edges at least partly being in contact with each other, during at least part of the motion.
[0021] By an "angling locking system" is meant a mechanical locking system which could be connected vertically and horizontally with angling comprising a tongue and a groove that locks two adjacent edges in a vertical direction and a locking strip with a locking element in one edge of a panel called "strip panel" that cooperates with a locking groove on another edge of a panel called "groove panel" and locks the edges in a horizontal direction. The locking element and the locking groove have generally rounded guiding surfaces that guide the locking element into the locking groove and locking surfaces that locks and prevents horizontal separation between the edges.
[0022] Vertical folding is not a pure combination of for example an angling locking system on a long edges and a vertical locking system on short edges since the vertical and the angling actions are combined and the short edges are folded together in the same way as scissors. The locking takes place gradually from one edge section adjacent to one long edge, which is angled, to the other edge section adjacent to the other opposite long edge. Such locking of two adjacent edges is defined as a "folding lock"
[0023] "Vertical folding" is a locking of three panels where combinations of angling on long edges and folding on short edges is used. By "vertical folding along the vertical plane" is meant a vertical folding with the upper edges of two short edges essentially in contact during the essentially the whole folding action until the edges are locked together.

Description of Embodiments of the Invention

2. The set of floor panels as claimed in claim 1, wherein the flexible tongue (30) is configured such that an angling along an edge triggers the displacement of the locking part (19) at another edge.

4. The set of floor panels as claimed in claim 3, wherein the flexible tongue (30) is configured such that pressing an adjacent edge of a panel vertically against the pressing extension (16) causes the displacement of the locking part.

5. The set of floor panels as claimed in any one of the preceding claims, wherein the flexible tongue (30) comprises a polymer material, such as PA (nylon), POM, PC, PP, PET or PE.

6. The set of floor panels as claimed in anyone of the preceding claims, wherein the plastic material is reinforced by glass fibre, Kevlar fibre, carbon fibre or talcum or chalk. 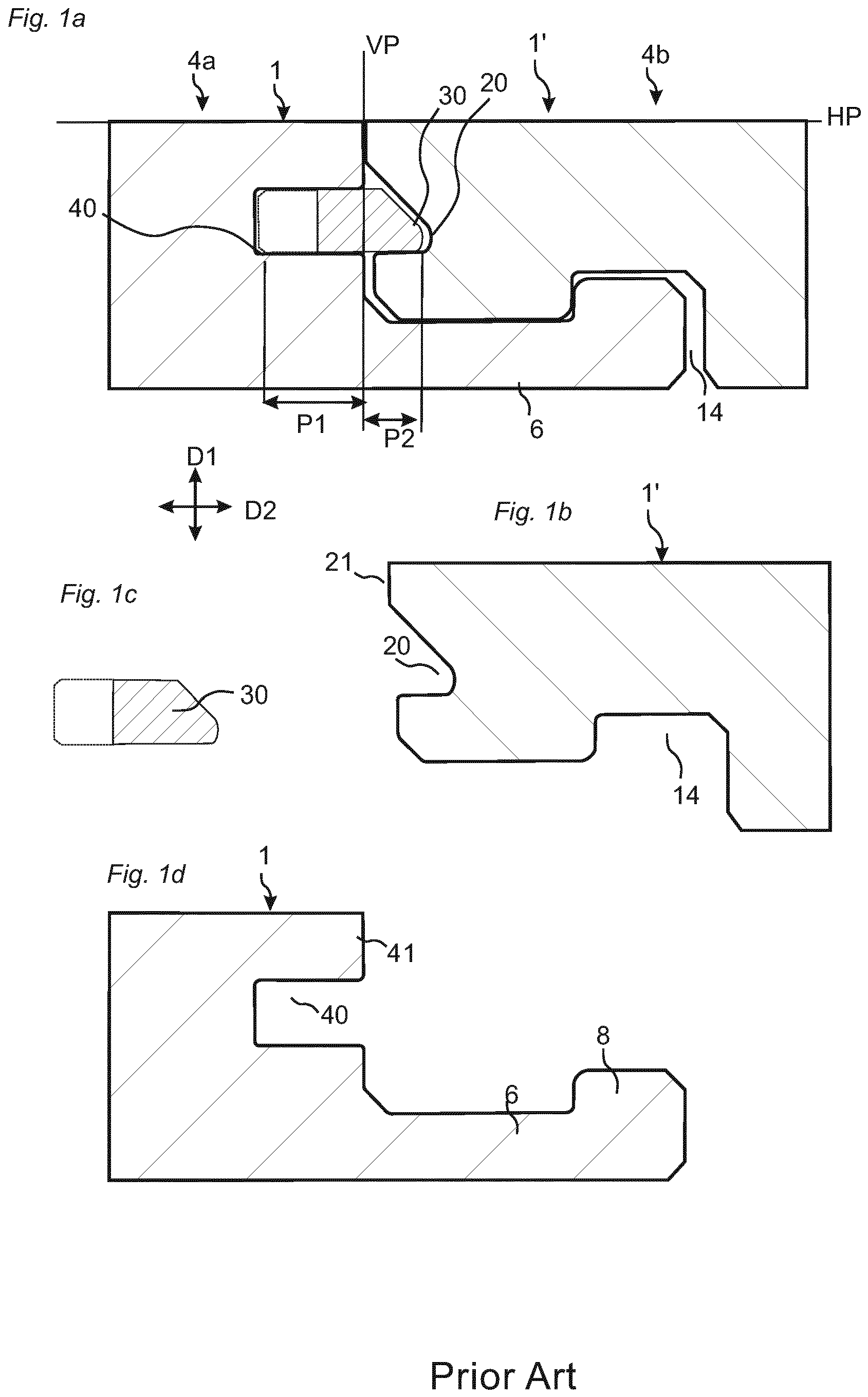 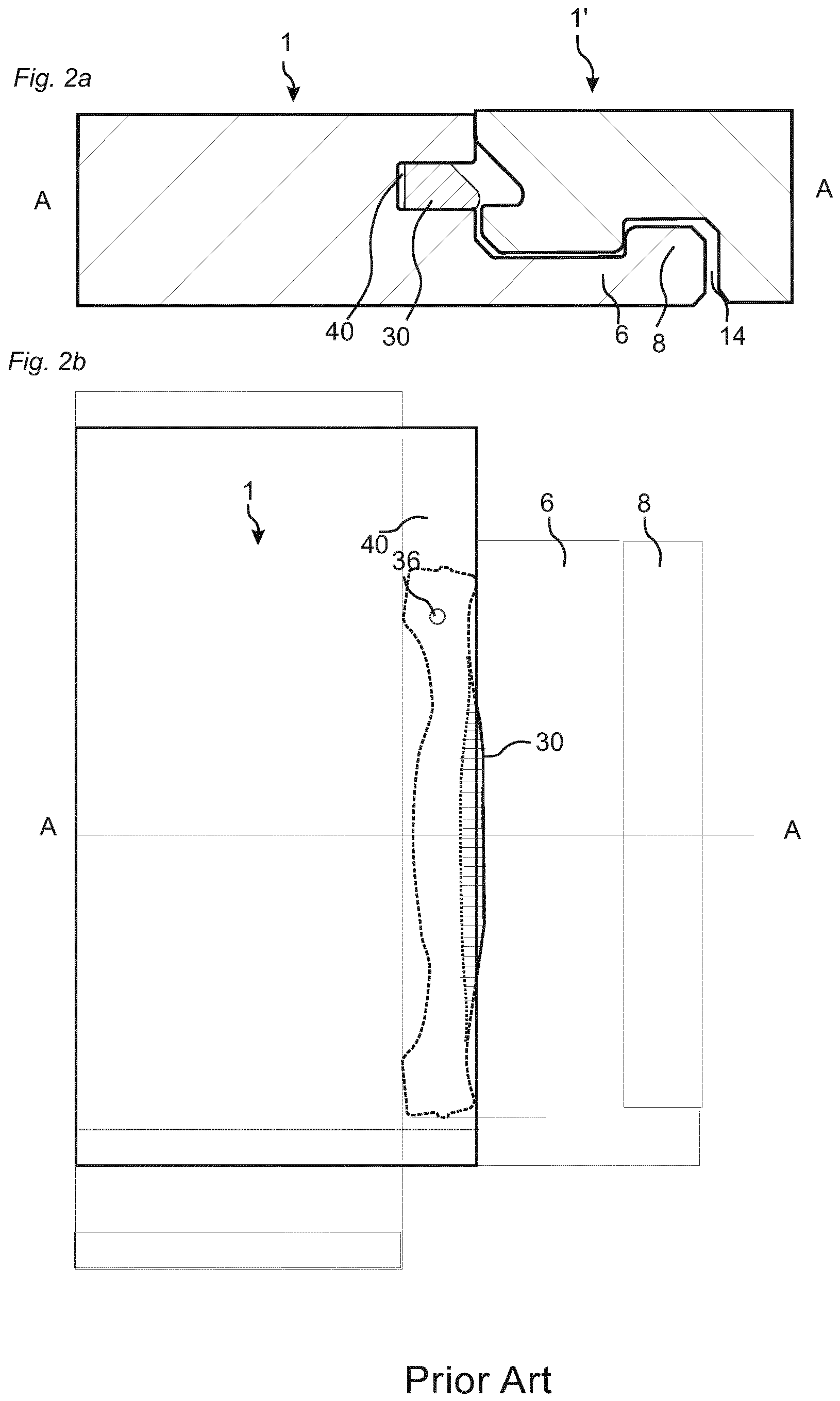 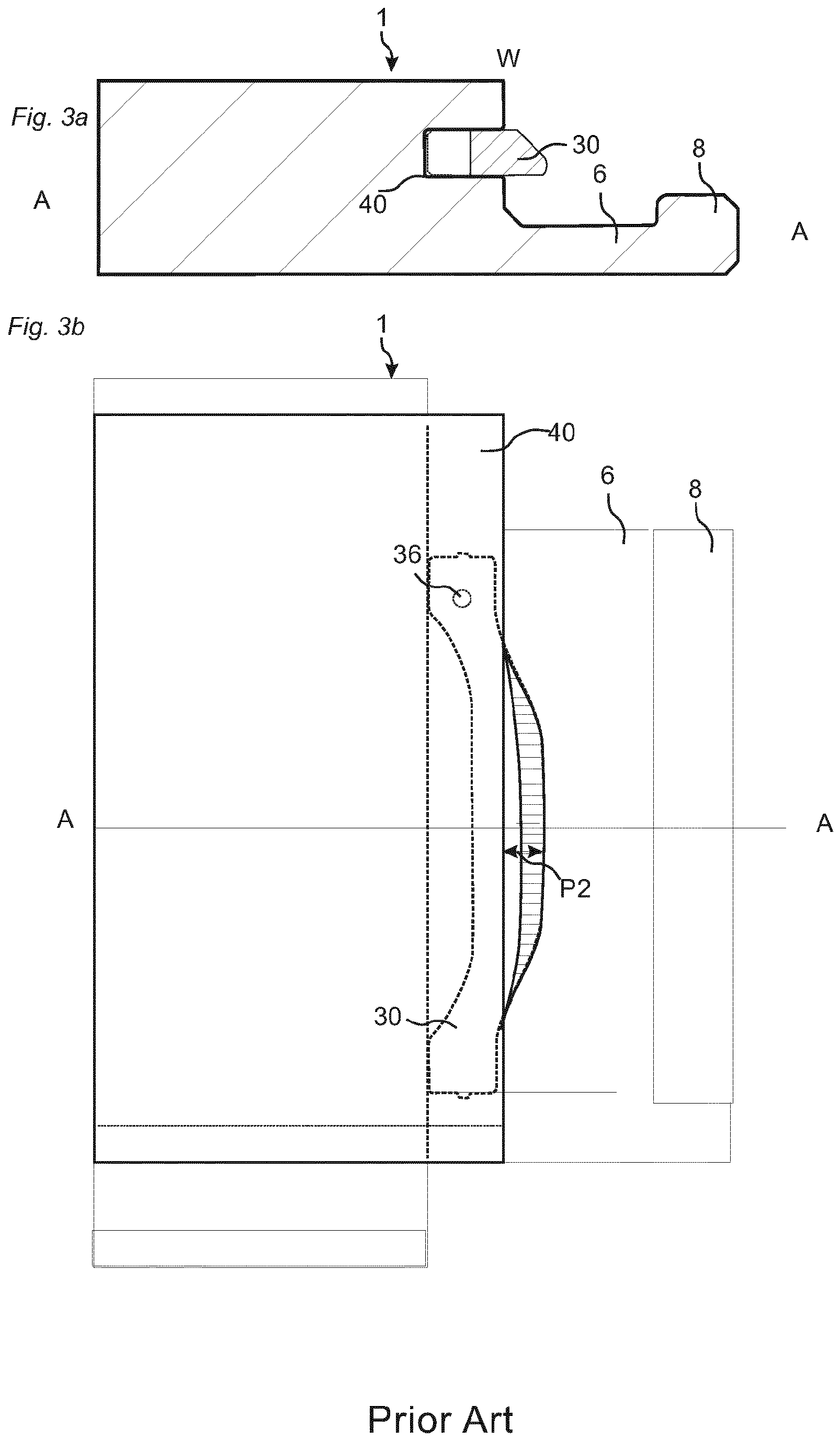 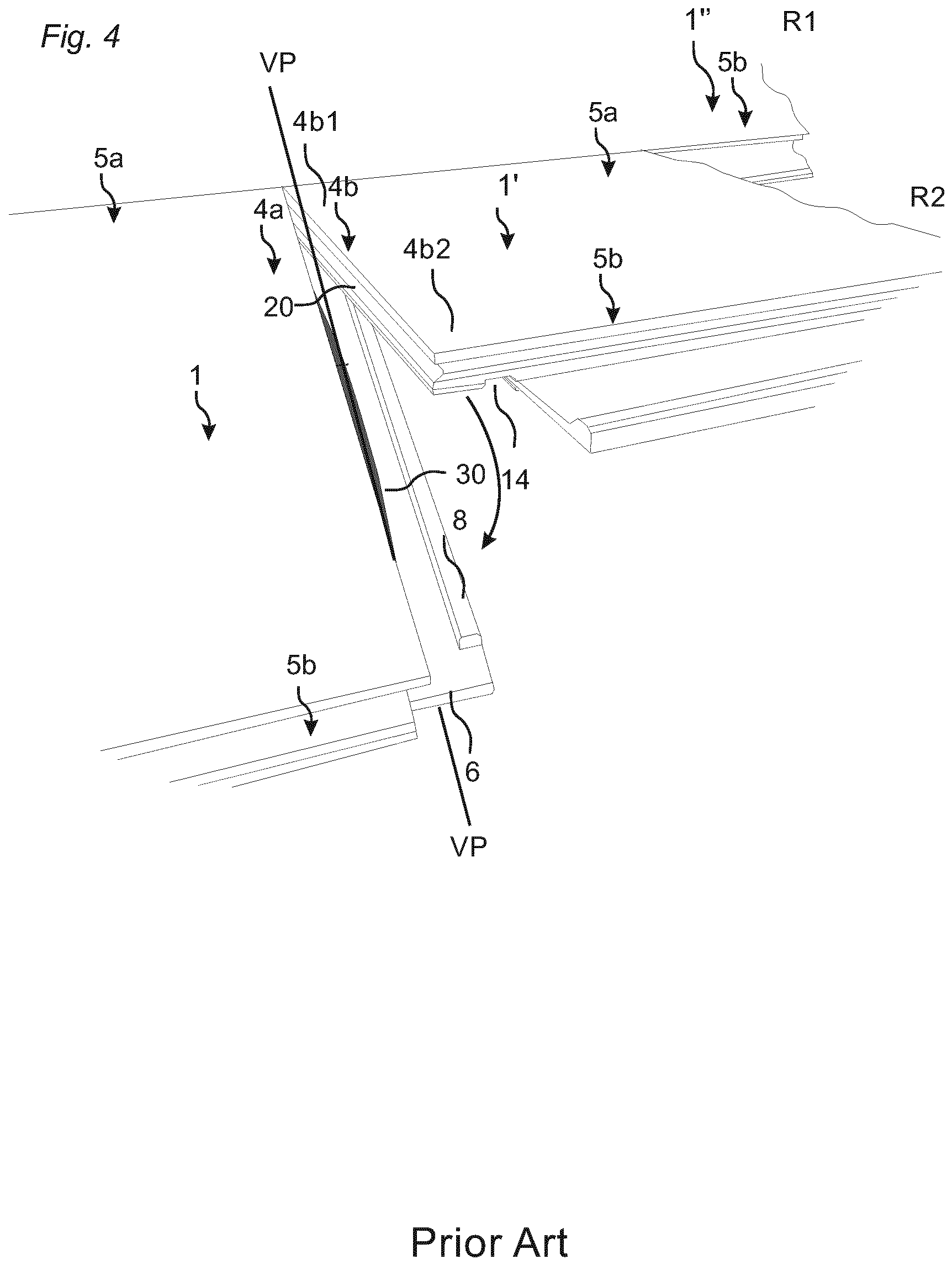 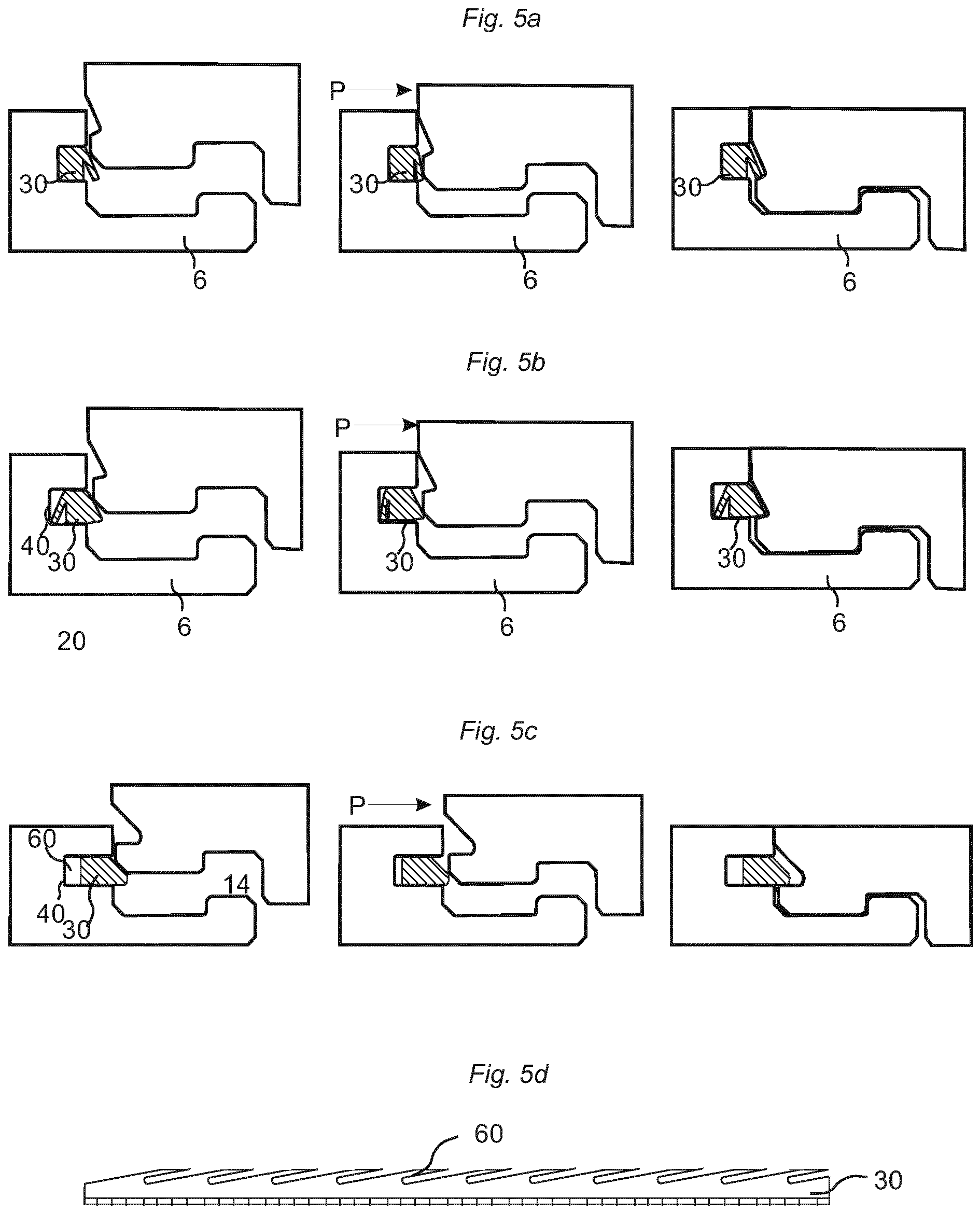 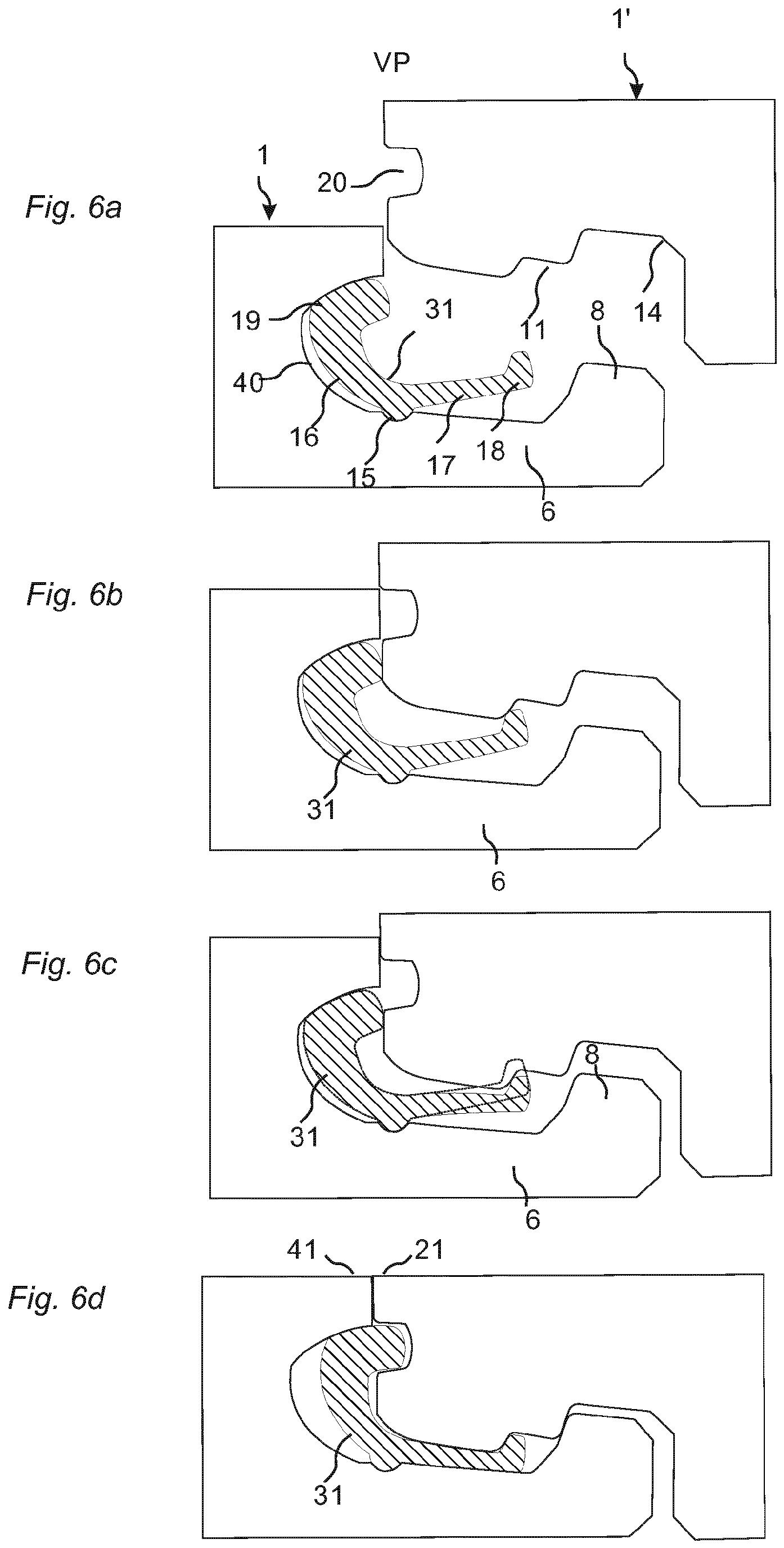 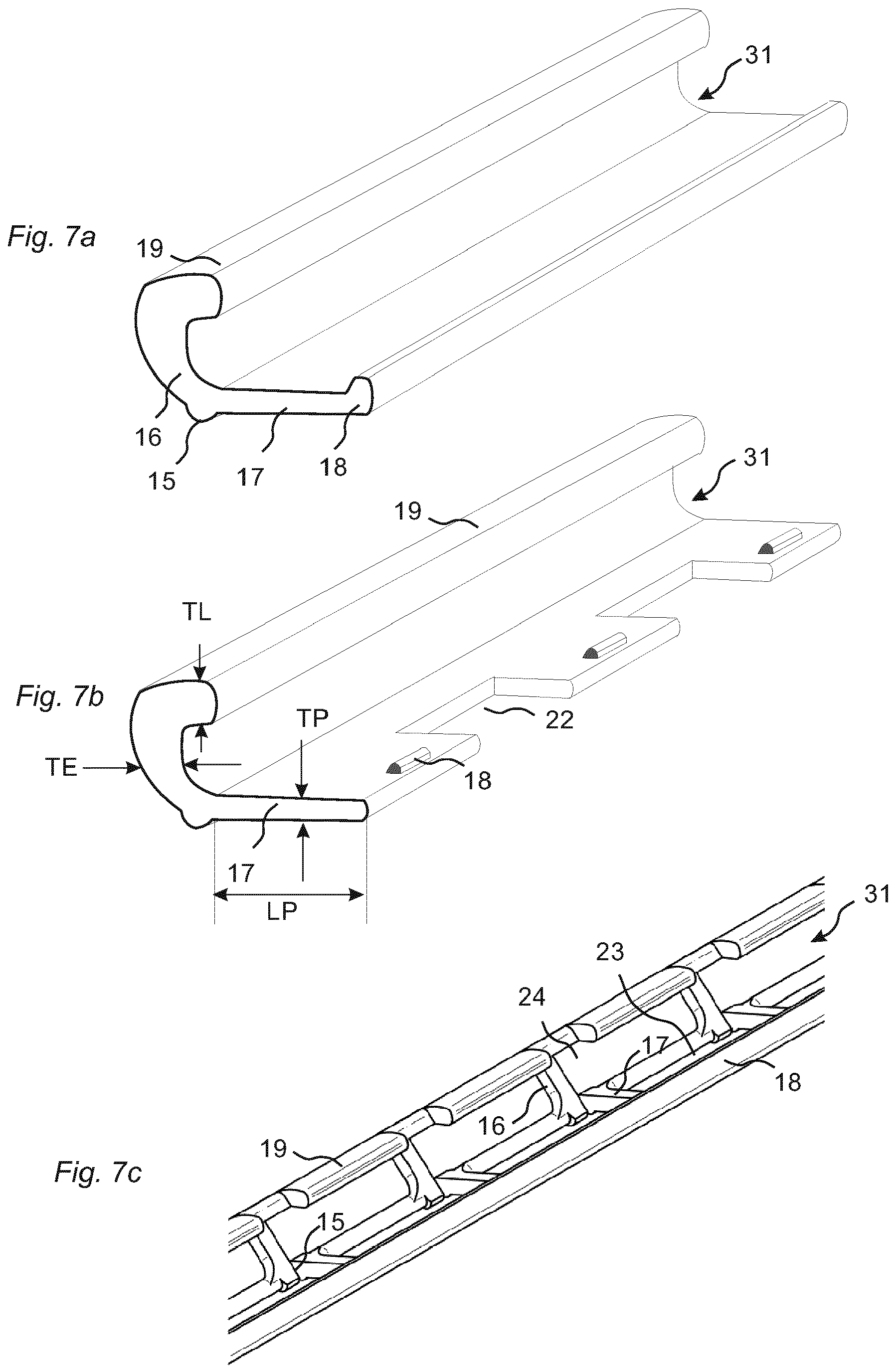 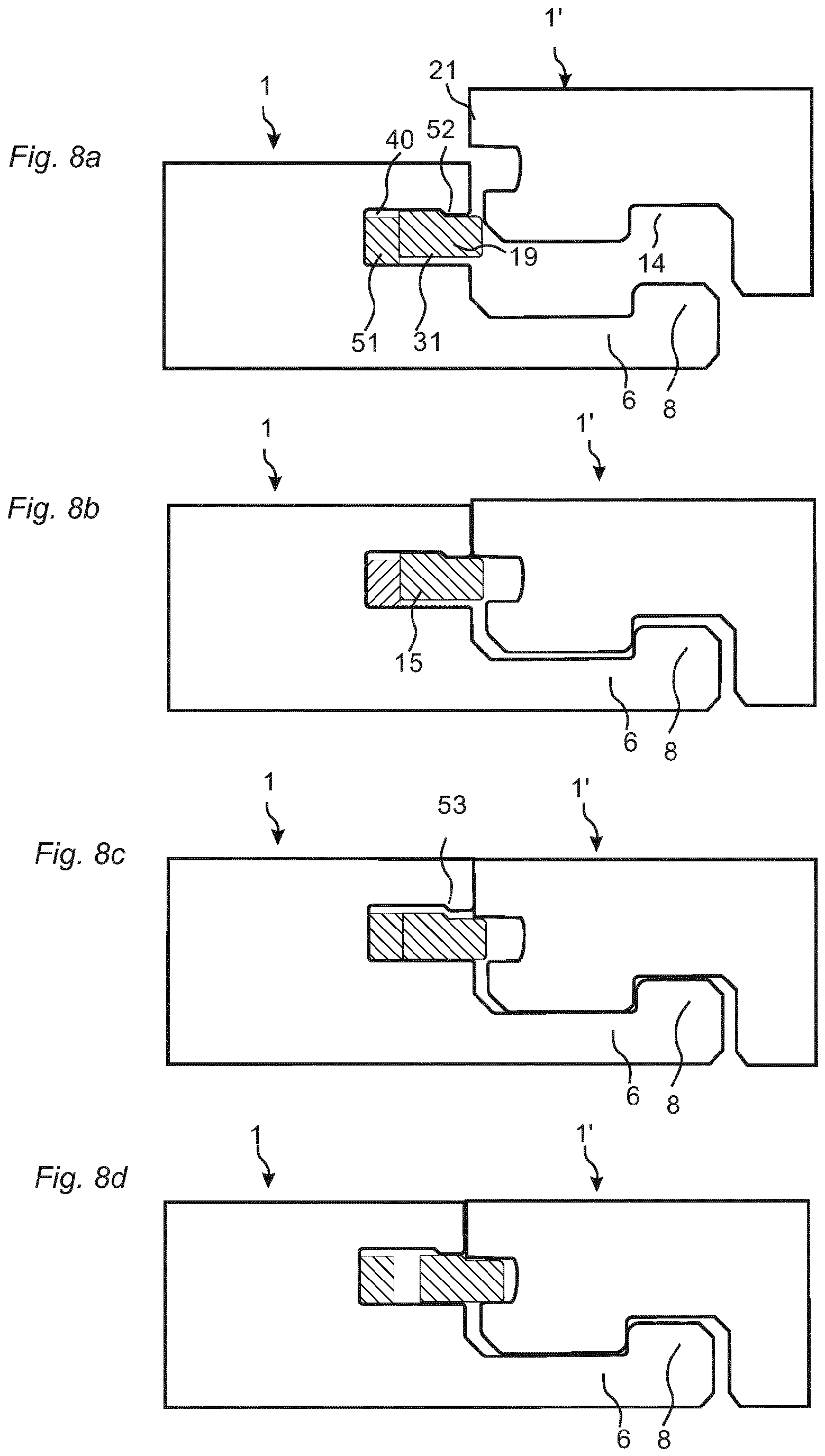 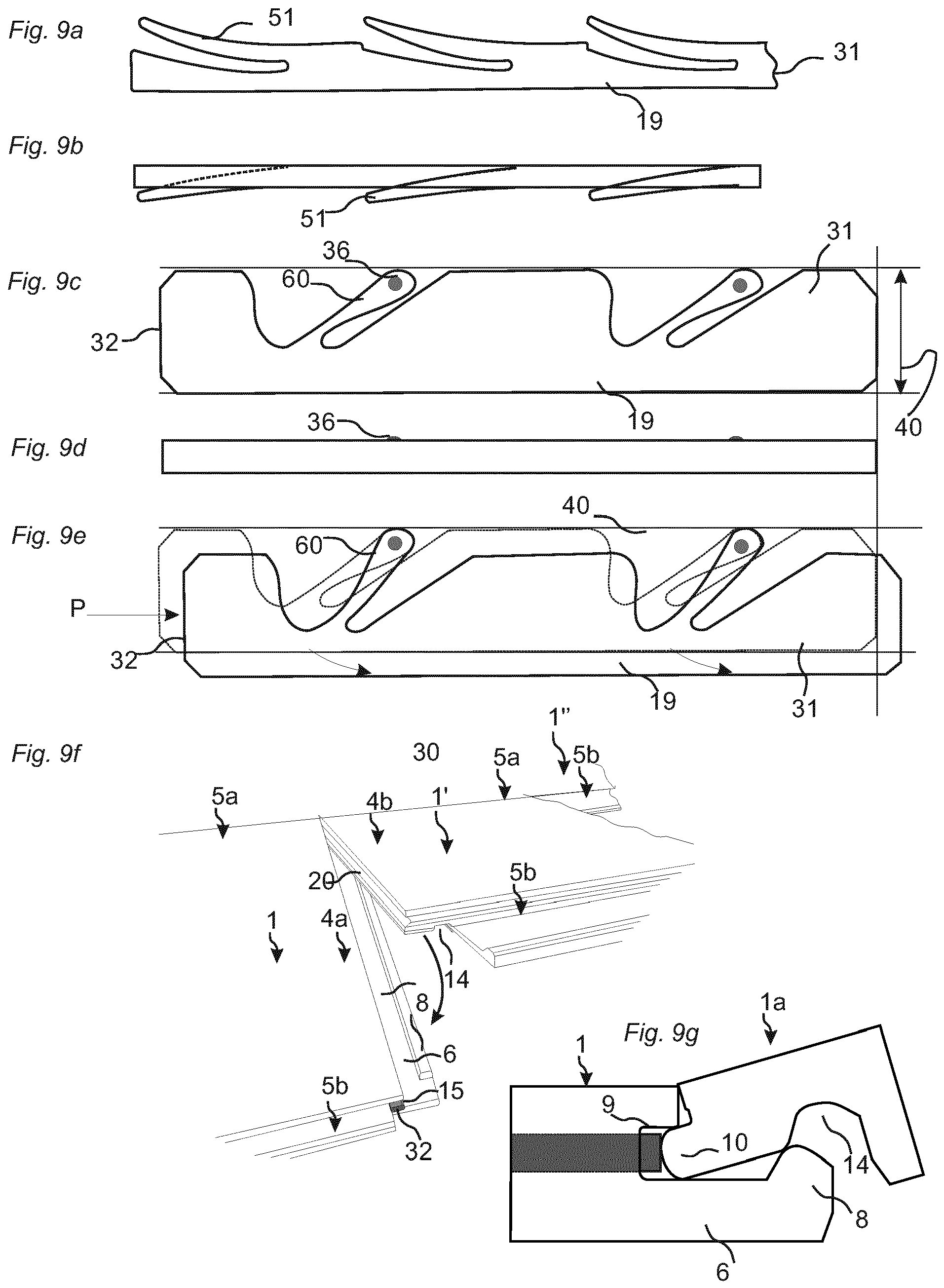 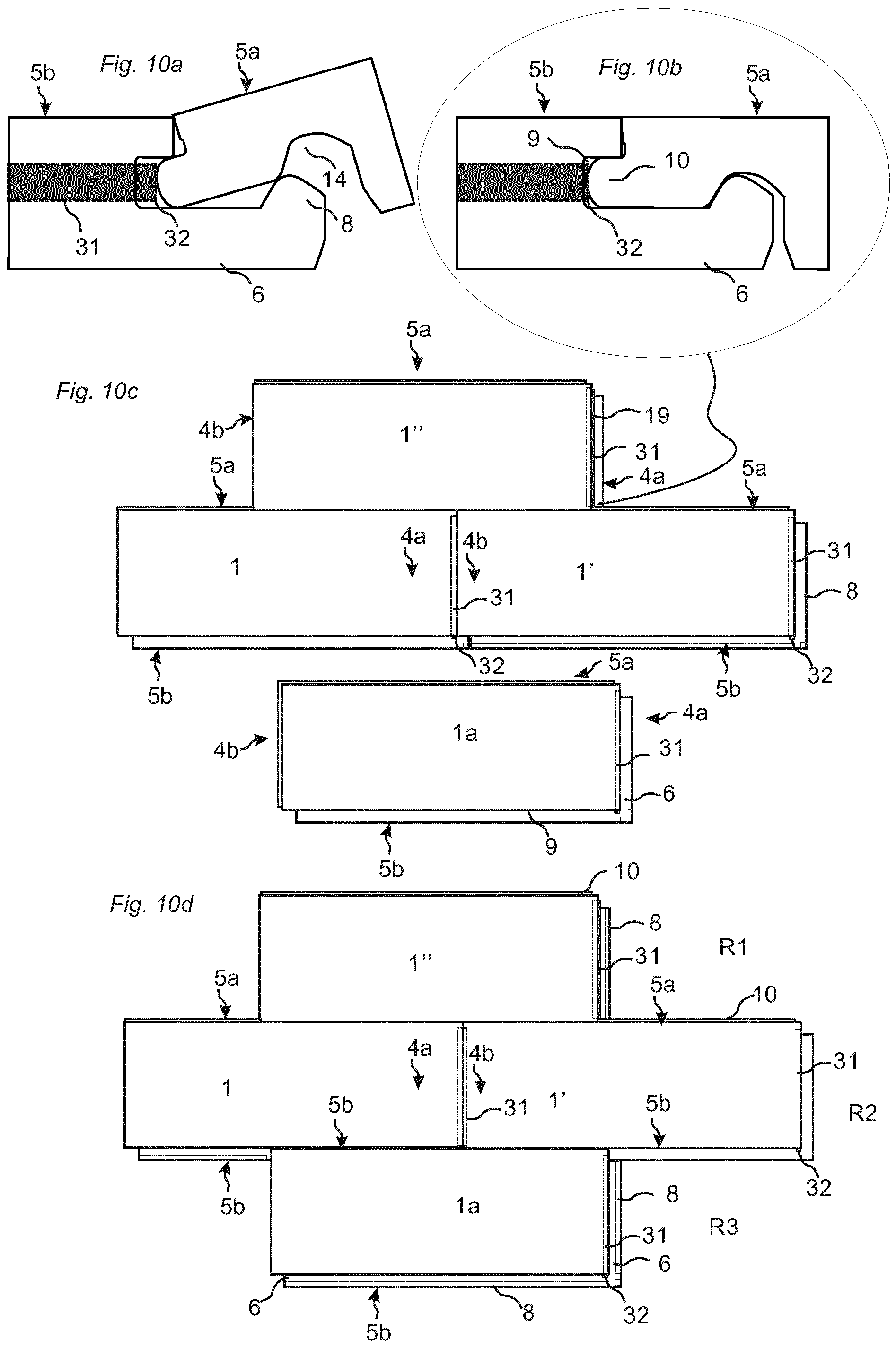 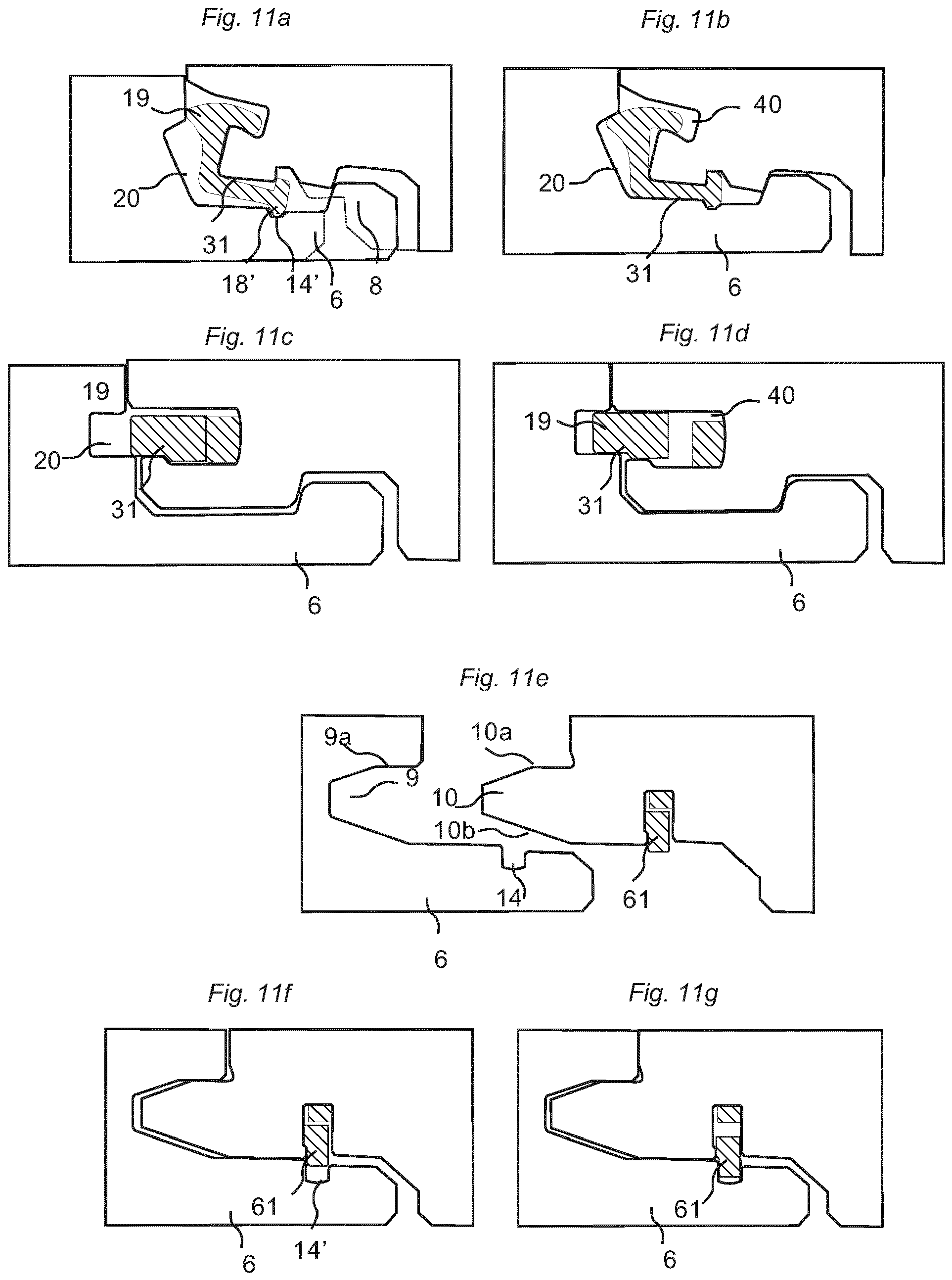 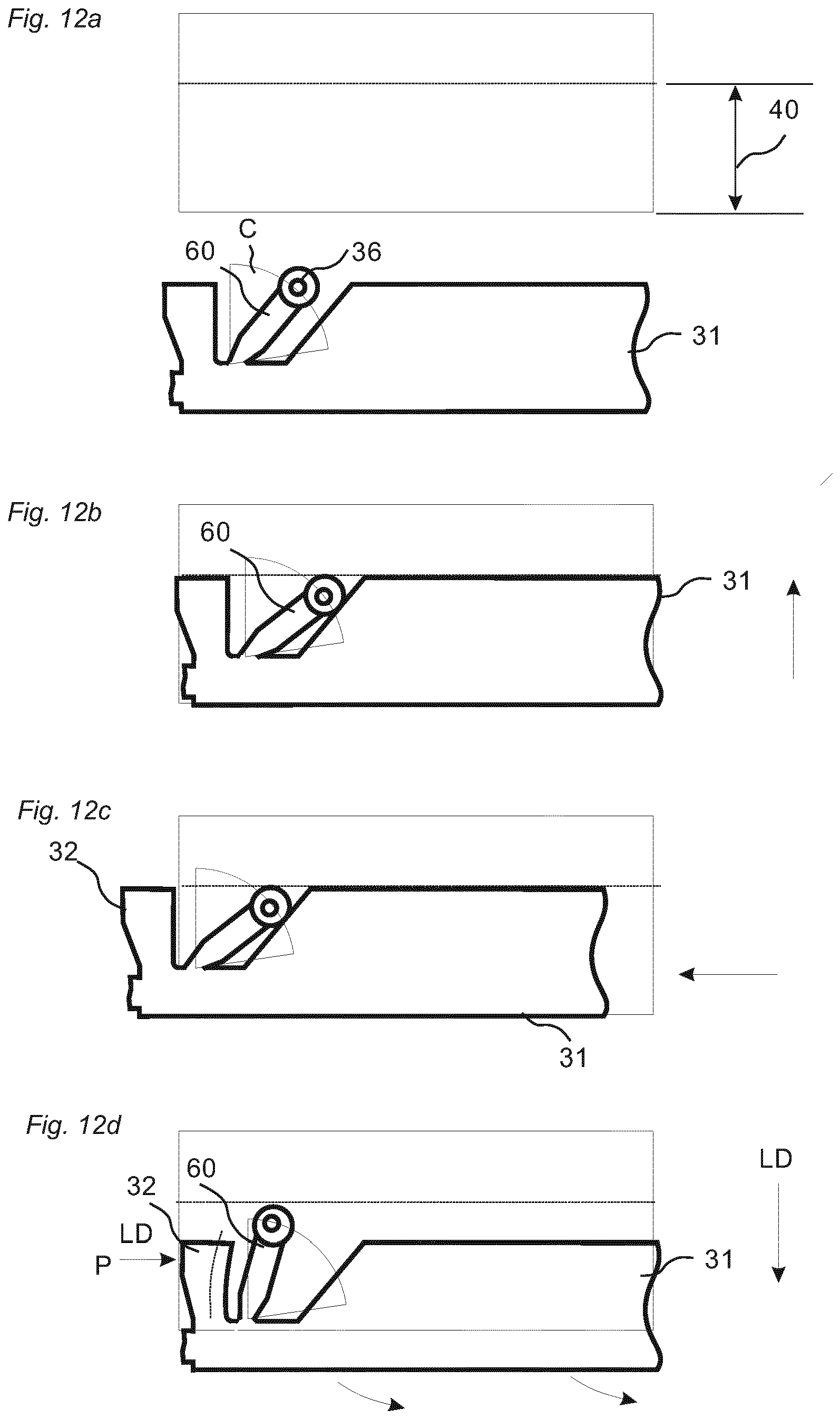 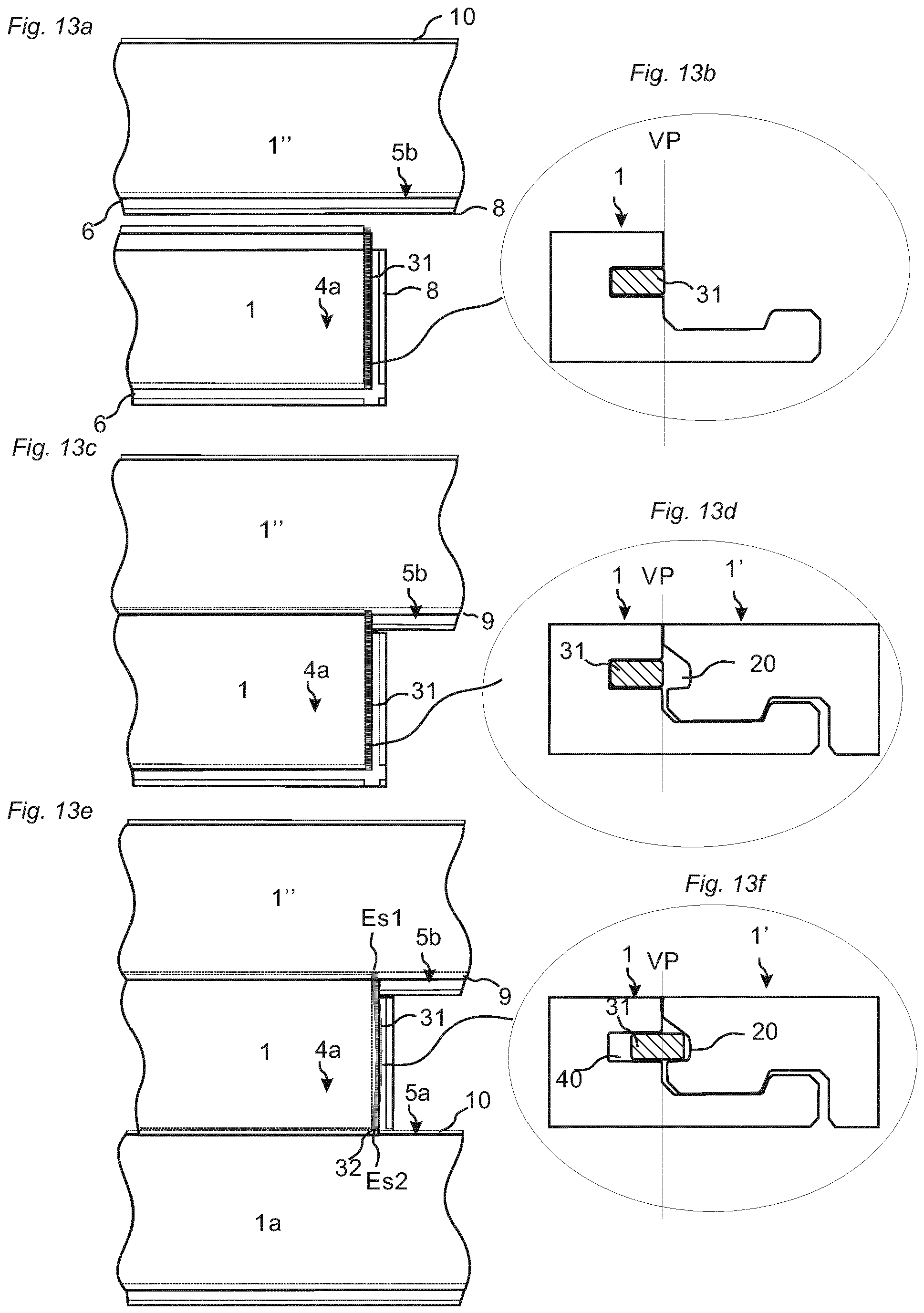 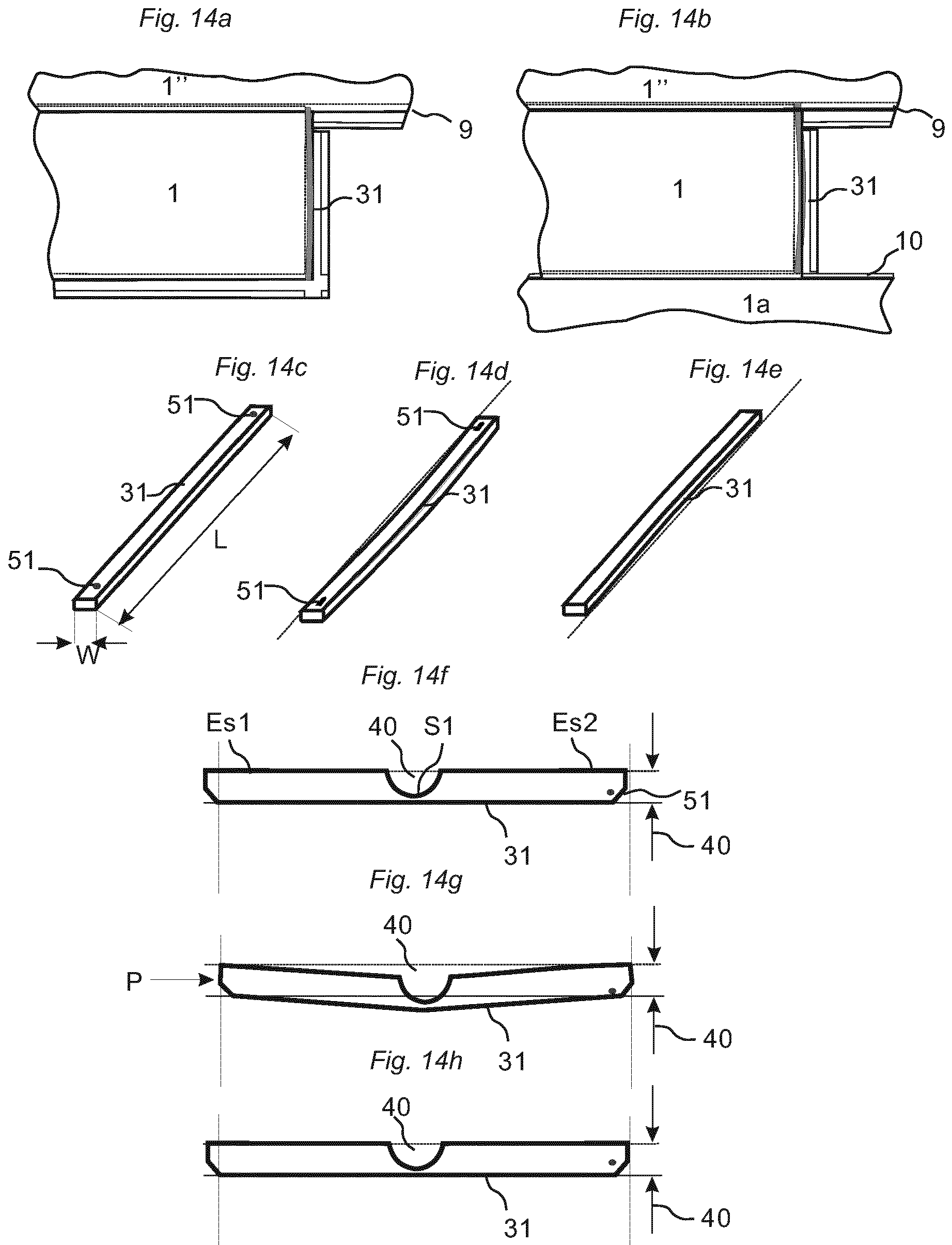 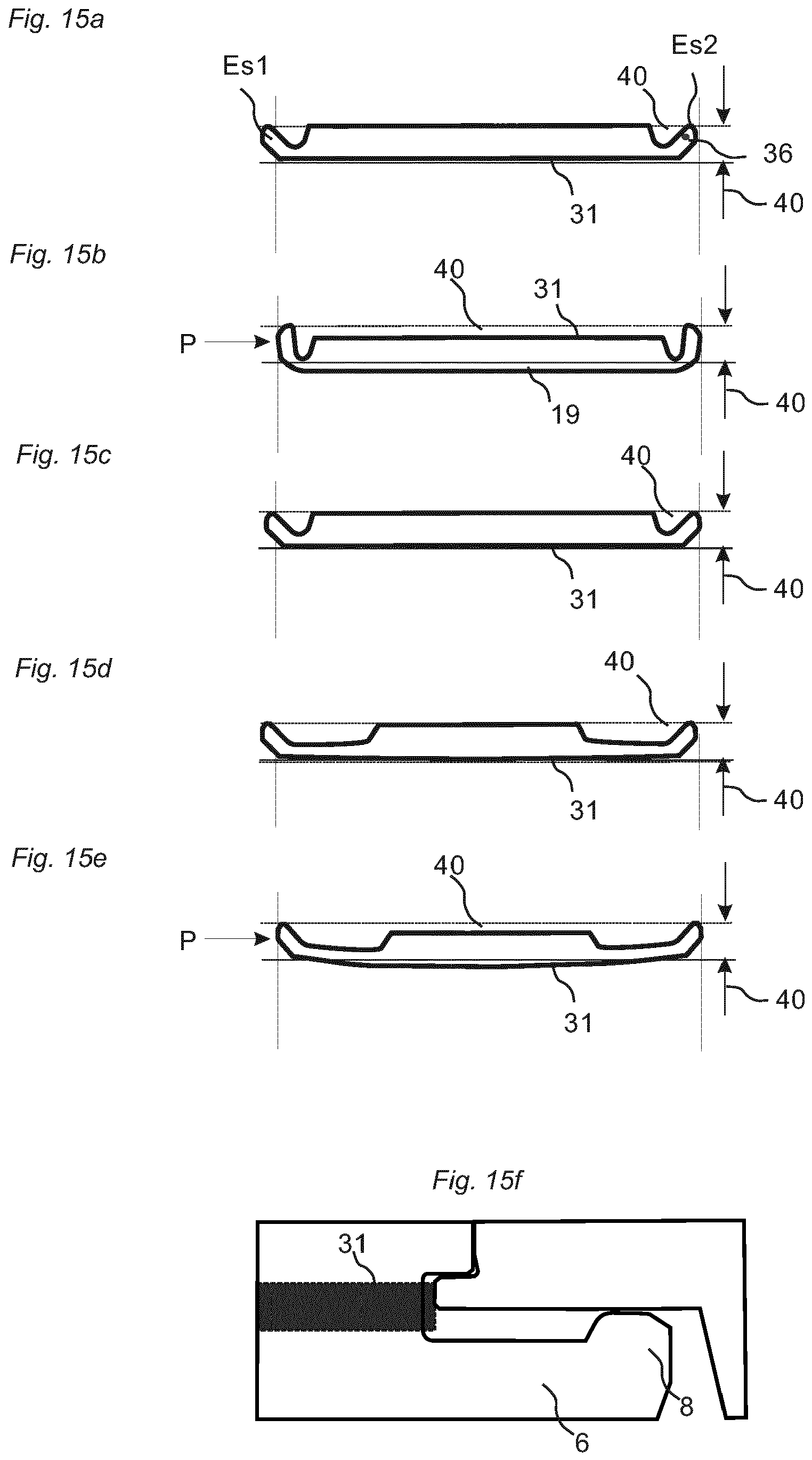 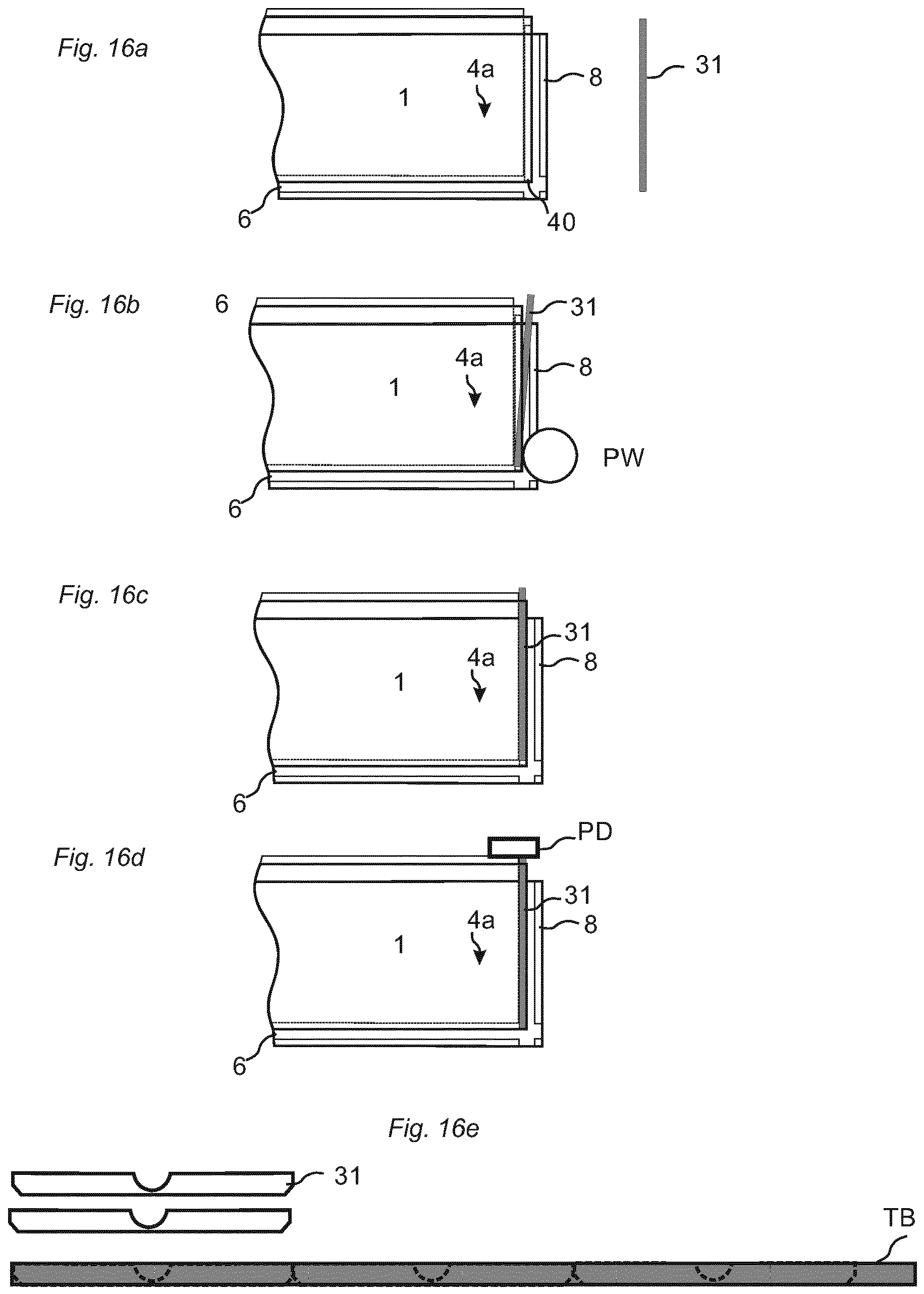 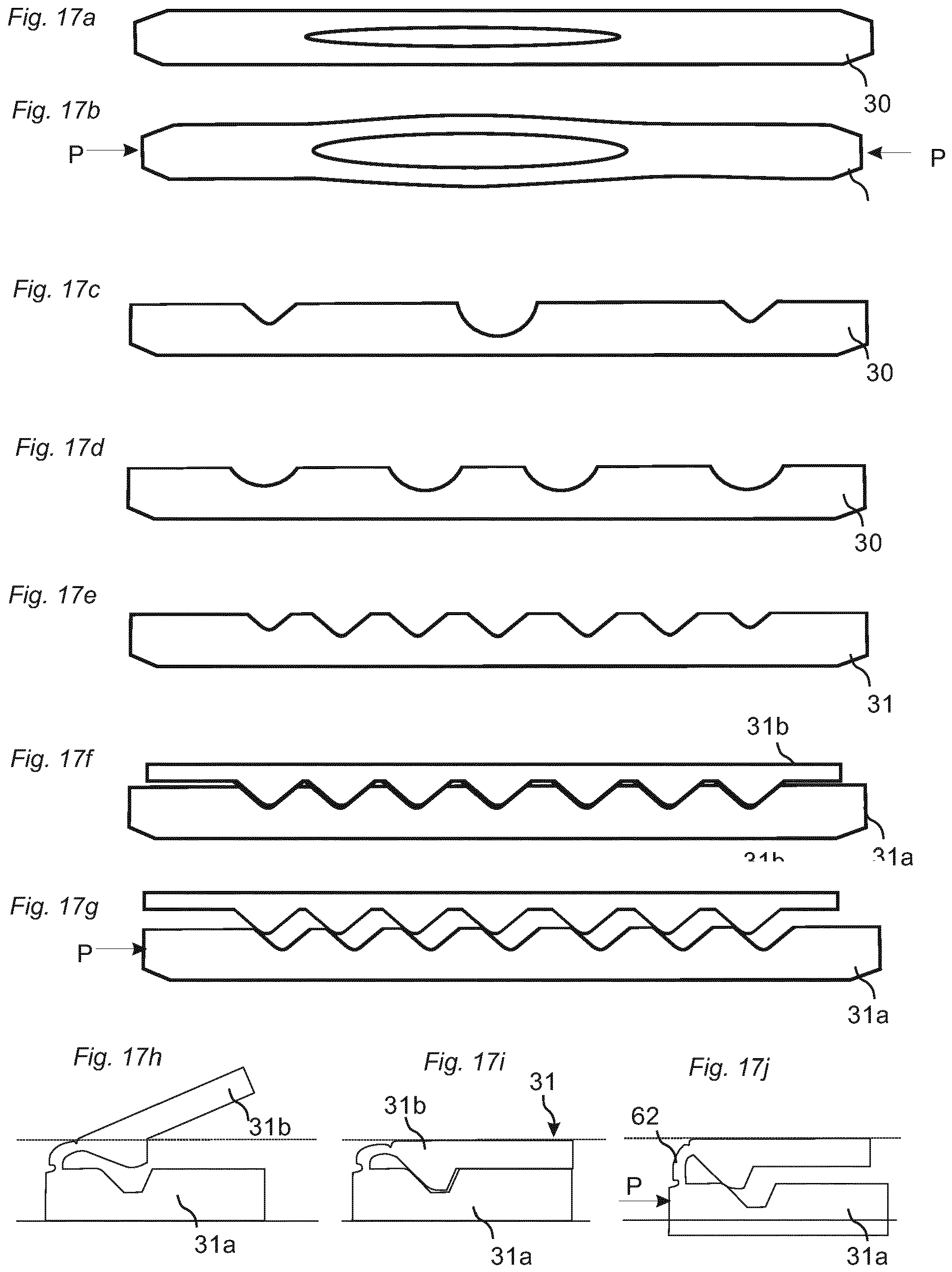 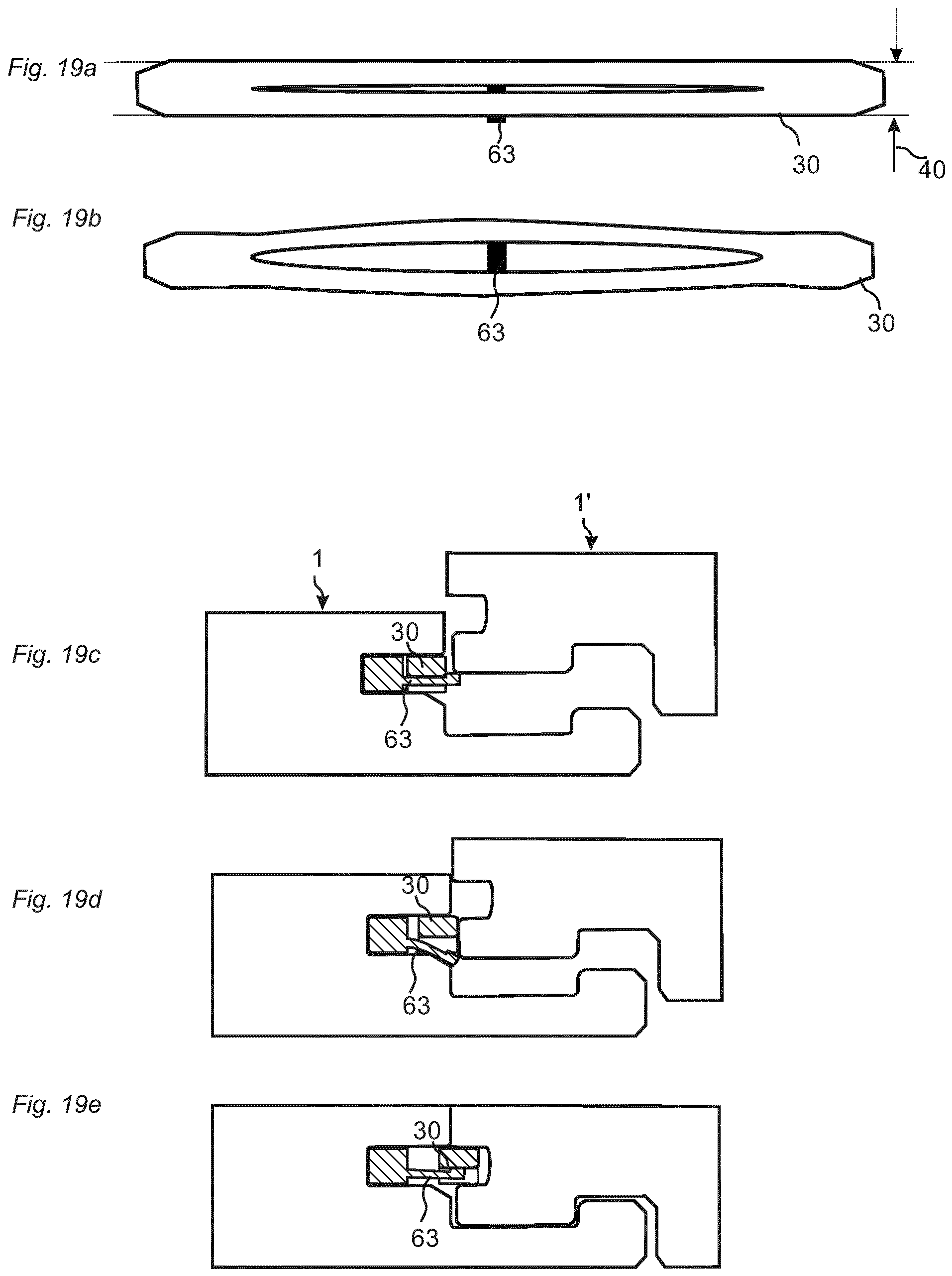 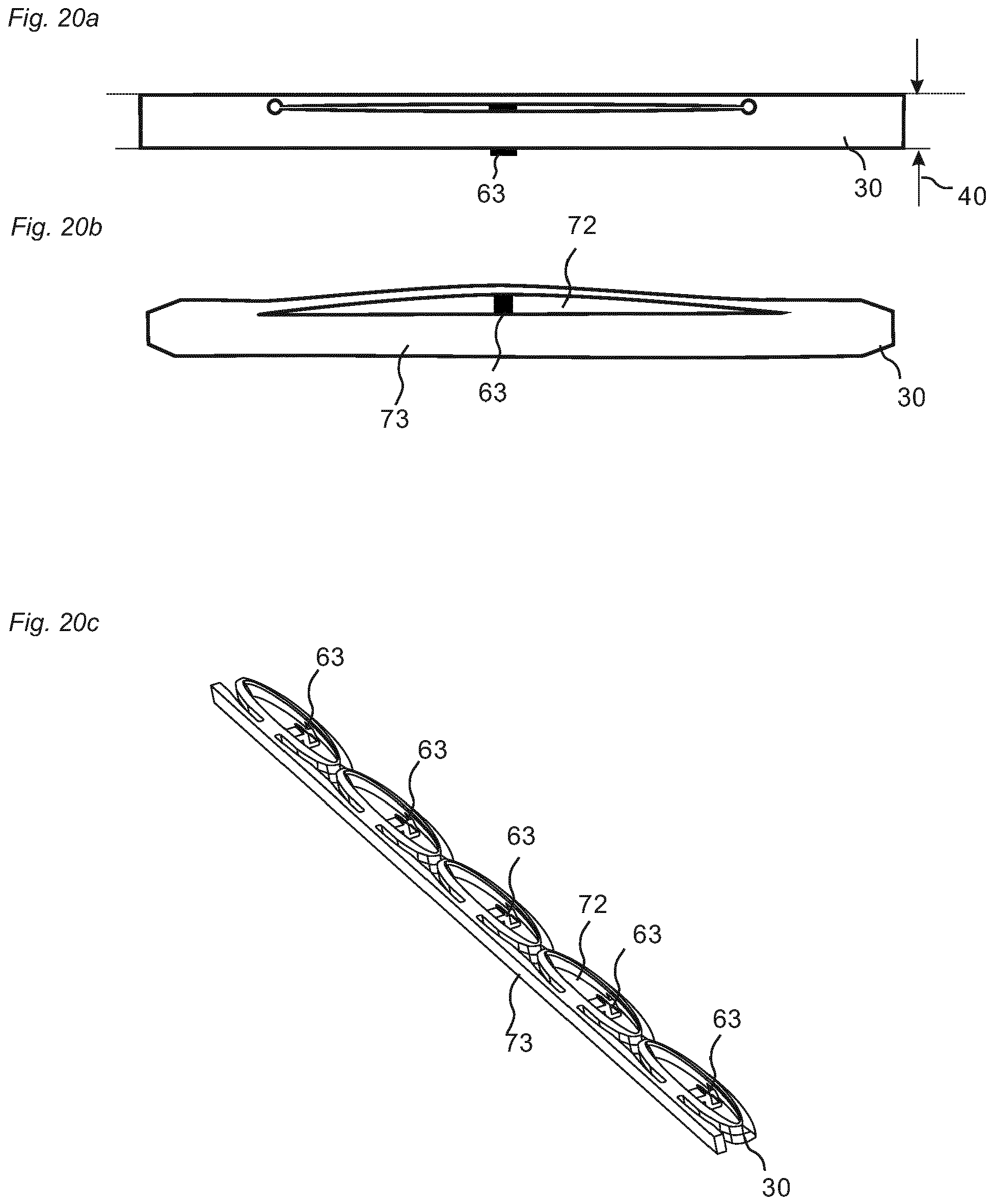 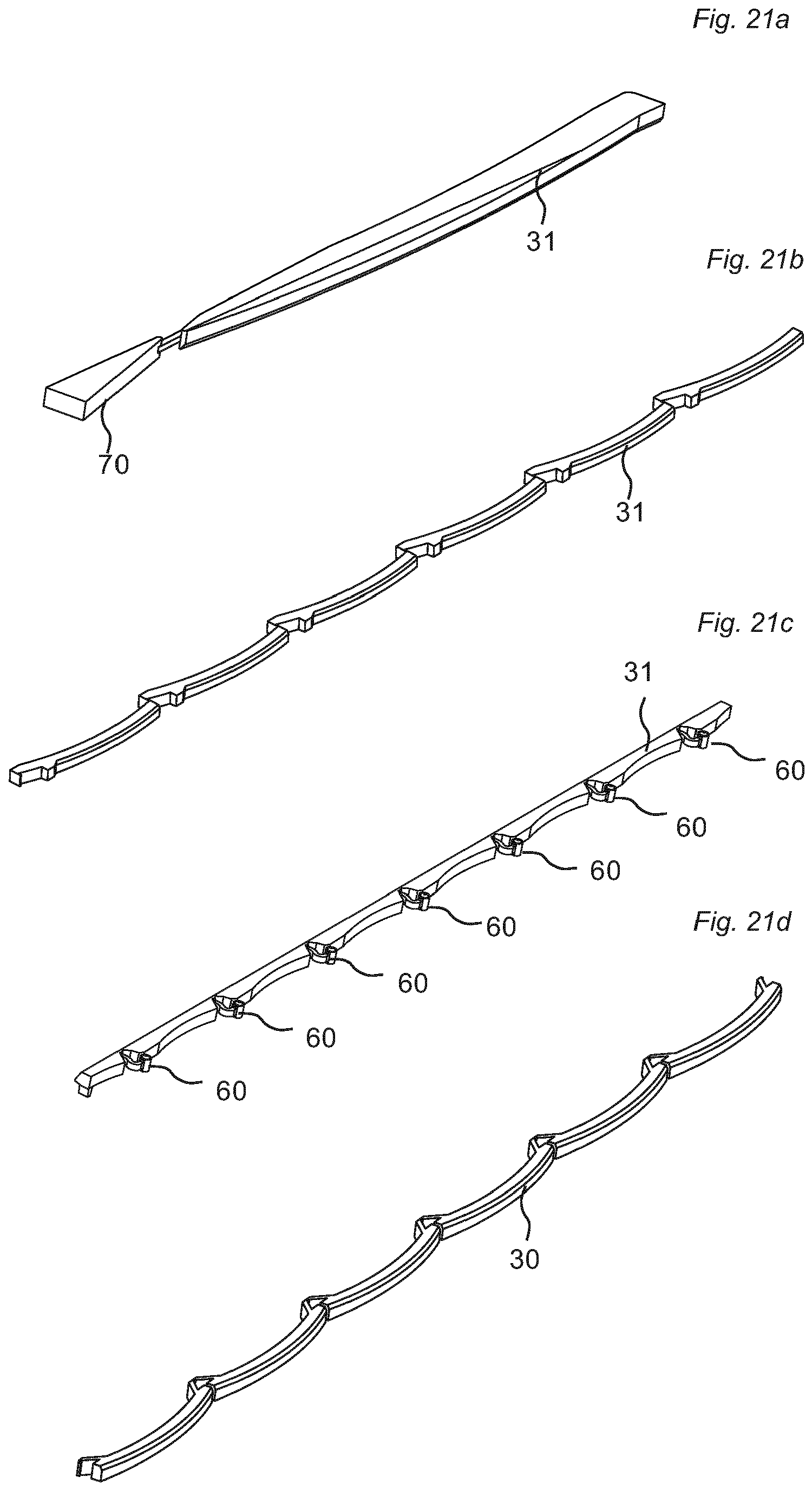 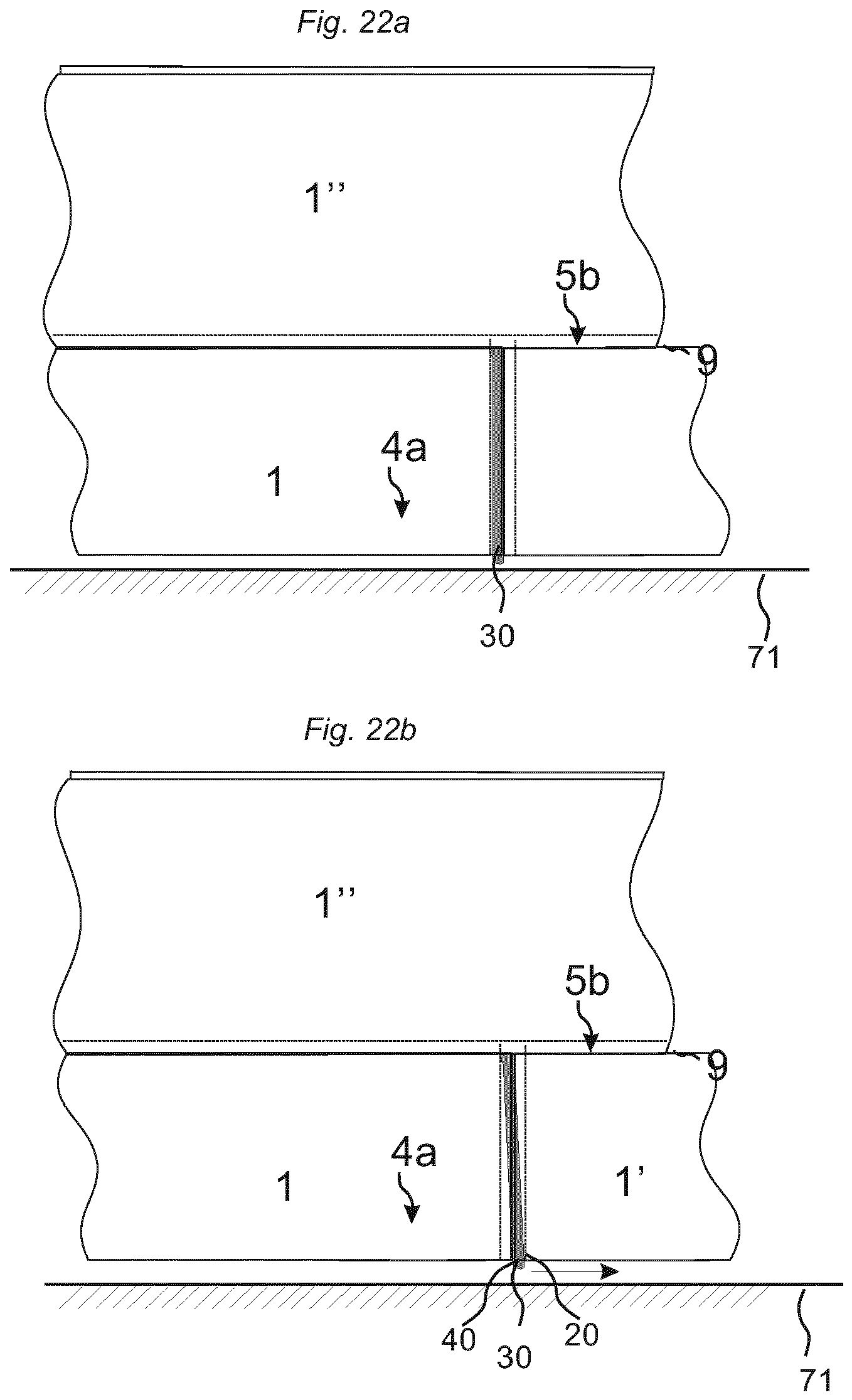 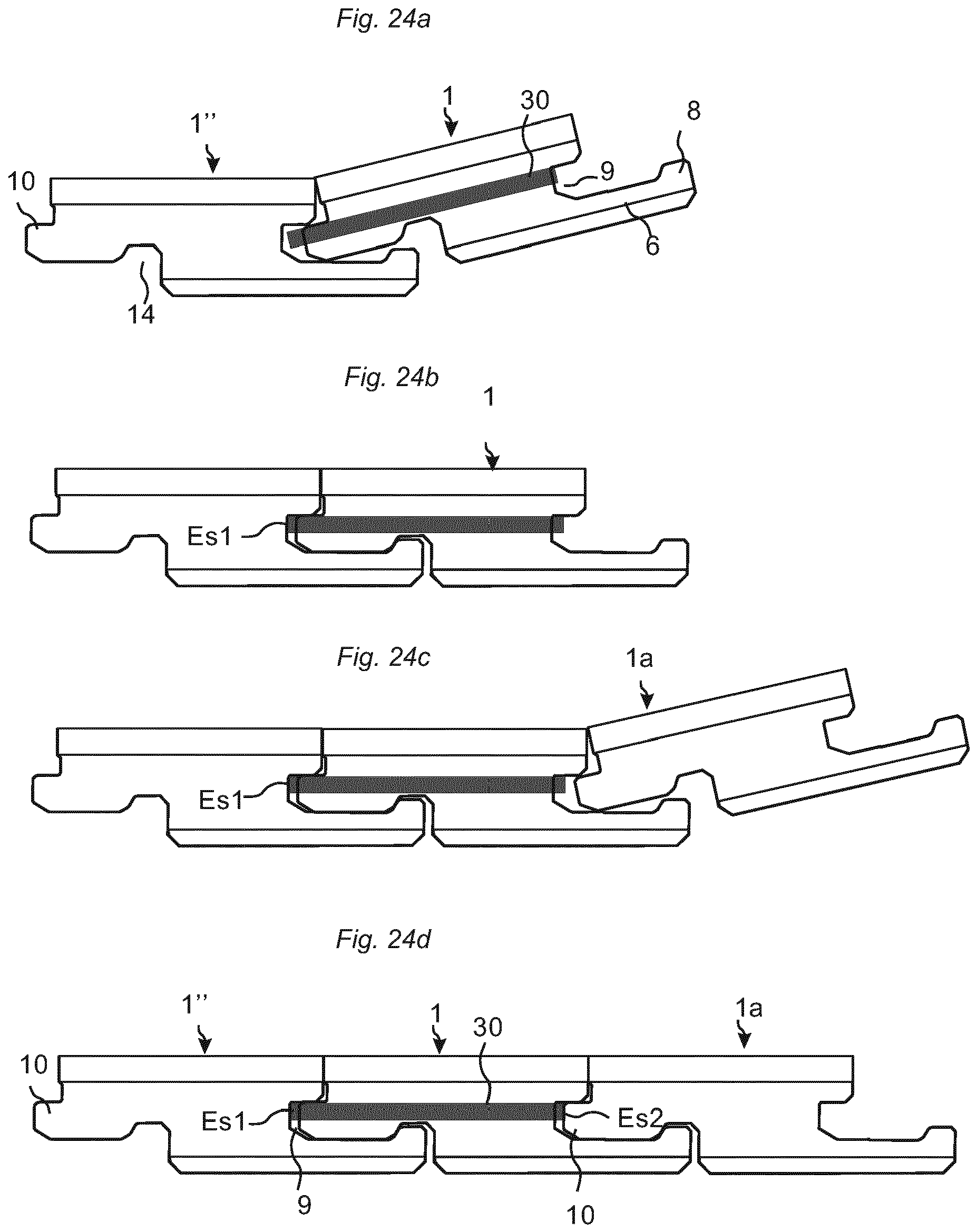 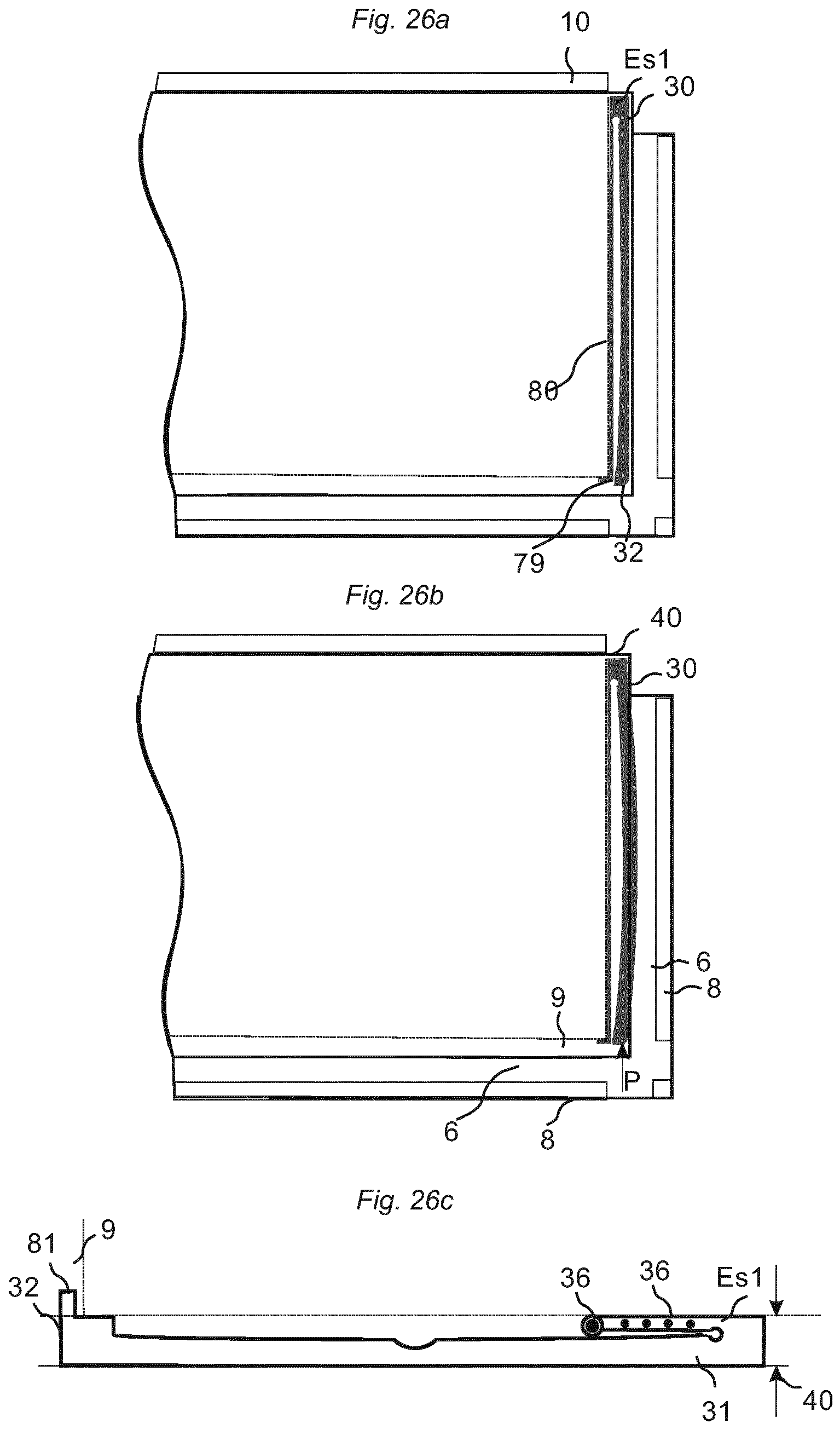