[0003] Tie-layer adhesives are used to bond polyolefins to dissimilar substrates in multilayer, co-extruded structures, particularly for blown and cast film, extrusion coating, blow molding, sheet extrusion, wire & cable, pipe, and other industrial applications. The tie-layer adhesive typically comprises a polyolefin base resin, which is the predominant component, and a grafted polyolefin. The grafted polyolefin is produced by reacting a polyolefin with an unsaturated monomer at elevated temperatures with or without a free-radical initiator. Commercially available tie-layer adhesives include Plexar® resins, product of Equistar Chemicals, LP, which are anhydride-modified polyolefins.
[0004] In addition to the base resin and grafted polyolefin, tie-layer adhesives commonly include other polymer resins or additives to provide better adhesion, clarity, or other benefits. Usually, there are tradeoffs. For instance, modifications that improve adhesion often reduce clarity, and vice versa.
[0005] Elastomers-random or block copolymers-are commonly included in tie-layer adhesive compositions to improve compatibility, increase adhesion, or impart other benefits. Styrene-based block copolymers, for instance, have been used to improve adhesion in multilayer constructions that require bonding of polyethylene to a styrenic polymer (U.S. Pat. Appl. Publ. Nos. 2007/0071988 and 2007/0167569).
[0006] Other commonly used elastomers include olefin elastomers, such as ethylene-propylene rubber (EPR) or ethylene-propylene-diene monomer rubber (EPDM). Many references teach to blend an olefin elastomer with other tie-layer adhesive components (see, e.g., U.S. Pat. Appl. Publ. Nos. 2004/0097637, 2008/0032148, 2009/0035594, and 2010/0174036), but none of these references suggests reacting the olefin elastomer with the grafted polyolefin during the manufacture of the grafted polyolefin.
[0007] Clarity of multilayer films is often an issue, particularly for the food packaging industry. Wraps for meat and cheese, snack foods, baking mixes, and many others uses require barrier layers (e.g., EVOH, polyamides, polyolefins) to prevent transmission of oxygen and/or moisture, and making such structures with high clarity poses a formidable challenge. Additives, such as the bicyclic modifiers of U.S. Pat. Appl. Publ. No. 2007/0054142, are sometimes employed to improve clarity without sacrificing adhesion.
[0008] U.S. Pat. Appl. Publ. No. 2010/0174036 teaches that tie-layer adhesives useful for multilayer films having a favorable balance of clarity and adhesion can be made by blending, in sequence, a grafted ("maleated") polyolefin, a polyolefin elastomer, and LLDPE.
[0009] US Application 12/924,540 discloses a graft composition useful for tie-layer adhesives and multilayer structures having improved adhesion and clarity, where the graft composition contains an LLDPE and the reaction product of a live, grafted polyolefin and an olefin elastomer.
[0010] Improved tie-layer adhesive compositions suitable for use in making multilayer structures with good adhesion and high clarity are needed. A valuable approach would avoid expensive additives and performance tradeoffs. Ideally, improved tie-layer adhesives could be made using economical starting materials, commonly used equipment, and familiar techniques.
[0011] US 2004/0097637 relates to an adhesive composition comprising an adhesive blend of 75 to 97.5 Wt. % polyolefin base resin and 2.5 to 75 Wt. % modified polyolefin grafted with ethylenically unsaturated carboxylic acid or acid derivative; and 50 to 10000 ppm, based on the adhesive blend, of an adhesion promoter. EP171777 relates to a blend of grafted high density poly- ethylene (EDPE), with at least one polymer of the group consisting of ungrafted linear low density polyethylene (LLDPE), and low density polyethylene LDPE, wherein the grafted HDPE comprises HOPE having succinic acid or succinic anhydride groups grafted along the HDPE copolymer chain. US2008/0163978 relates to an Extrusion and lamination process for producing multi-layer constructions, wherein metal and polyolefin layers are bonded through a tie-layer comprising a base resin and two functionalized ethylene polymers.
None of these documents relates to a grafted polyolefin composition being the reaction product of a live, grafted polyolefin and an olefin elastomer

[0017] Embodiments of the present application are described, by way of example only, with reference to the attached Figure, wherein:

FIGURE 1 illustrates the effect of LDPE on gel reduction.

where the sealant layer is, for example, EVA, LLDPE or ionomer.
[0054] The following examples merely illustrative and those skilled in the art will recognize many variations are available that are within the spirit of the present disclosure.

[0058] Graft-1 is a live, grafted polyolefin produced by feeding a high-density polyethylene (density: 0.957 g/cm3) and maleic anhydride (2.2 wt.% based on total charged reactants) to a first Coperion® ZSK-92 twin-screw extruder having zones heated at temperatures ranging from 450oF to 660oF (230 to 350oC) and operated at shear rates within the range of 200 to 400 rpm to produce a live, grafted polyolefin.
[0059] To produce components (A-1) through (A-3), Graft-1 exits the first extruder and immediately enters a second ZSK-92 twin-screw extruder, where it is combined and reacted with an ethylene-propylene rubber (EPR). The specific EPR employed in the specific, non-limiting examples summarized below is Vistalon® 722 (labeled in Table 1 as V722), which is a product of ExxonMobil® having 72 wt.% ethylene recurring units. In Table 1, V722 is indicated as being present at specific weight percentages. These weight percentages are weight percentages of the overall grafted polyolefin composition A). For example Graft-1 co-extruded with V722 @ 25% refers to a graft composition comprising the reaction product of a Graft-1 with V722, wherein the V722 is present in an amount of 25 percent by weight of the graft composition. Accordingly, components, (A-1), (A-2), and (A-3) include 25wt%, 30wt%, and 35wt% EPR respectively. The second extruder was operated at a temperature in a range of from 300°F to 450°F (150 to 230°C); and a shear rate in a range of from 200 to 400 rpm. The resulting graft composition, Component (A) was then cooled and pelletized.

[0064] As illustrated in the specific, non-limiting examples summarized below, Component (D) can be one or more additives. In the specific, non-limiting examples summarized below, IRGANOX® 1076 and IRGAFOS® 168 are employed as antioxidants. IRGANOX® 1076 is a sterically-hindered phenolic antioxidant available from CIBA®. IRGAFOS® 168 is a trisarylphosphite processing stabilizer also available from CIBA®.
[0065] According to the specific, non-limiting examples summarized in Table 1 components (A), (B), (C), and (D) were dry blended and melt extruded at 200-240°C and 210-250 rpm to form Tie-Layer Adhesives in the amounts indicated. It is also possible to melt blend the components or combine them using other techniques known in the art.
[0066] Multi-Layer Films were prepared using the tie-layer adhesives of inventive examples E1 - E7 and comparative examples C1 - C7. Results are summarized in Table 2.
[0067] More specifically, five-layer films (3 mils) were produced using the tie-layer adhesives of inventive examples E1 - E7 and comparative examples C1 - C7. Each multilayer film was made on a Killion extruder (comprised of 3 extruders in this case) with a barrel length to barrel diameter (L/D) ratio of 24:1, a barrel diameter of about 1 to 1.25 inches, and 3 barrel heating zones.
[0068] Killion extruders may be obtained from Killion Extruders, Inc. of Cedar Grove, NJ. Each multilayer film has the structure: HDPE / tie layer / EVOH / tie layer / HDPE. HDPE is Alathon® M6210, a product of Equistar® Chemicals, LP, which has an MI2 of 0.95 dg/min and density of 0.958 g/cm3. Ethylene-vinyl alcohol copolymer (EVOH) is Soarnol® DC3203 FB grade, product of Nippon Gohsei® Kagaku K.K., Japan. The layer distribution was 43%, 4%, 6%, 4%, and 43%, respectively based on total film or sheet thickness. Other coextrusion processes can be employed in the art including blown film processes.
[0069] Film samples are tested for adhesion according to ASTM D1876. The force required to separate the film apart in a T-peel configuration at 25.4 mm (10 inches)/min is measured using an Instron® tensile tester. The average adhesion of five specimens is recorded as the peel strength in lb/in. Adhesion values are reported in Table 2.
[0070] Film samples were also tested for clarity using Narrow Angle Scattering (NAS) measurements. NAS refers to the see through clarity. The higher the value, the better the see through clarity. NAS can be reduced by interfacial disturbances due to adhesion of a tie-layer to a barrier substrate. Typically, the higher the adhesion, the lower the NAS, but the data presented in Table 2 is unique, because higher adhesion and generally higher clarity were observed upon the addition of LDPE to tie layer formulations. NAS measurements were performed using a Zebedee® CL-100 clarity meter. The samples were cut into 10 x 10 cm squares and adhered to the test unit in the front of the light source by air suction. The average clarity of seven specimens is recorded as the average clarity.
[0071] The results demonstrate that blends of a polyethylene having long chain branching, such as low density polyethylene (LDPE), along with a linear polyethylene, such as linear low density polyethylene (LLDPE) and a graft composition comprising the reaction product of a live, grafted polyolefin and an olefin elastomer can produce in tie-layer adhesives with improved clarity and adhesion. The addition of polyethylene having long chain branching, such as LDPE, to adhesive formulations unexpectedly shows simultaneous improvement in both adhesion and clarity compared to adhesive formulations without LDPE.

A) from 1 to 30 percent by weight of a grafted polyolefin composition;

B) from 65 to 85 percent by weight of a linear polyethylene;

C) from 0.5 to 25 percent by weight of a polyethylene having long chain branching; and

D) optionally one or more additives,

from 1 to 30 percent by weight of said grafted polyolefin composition,

from 65 to 85 percent by weight of a linear polyethylene,

from 0.5 to 25 percent by weight of a polyethylene having long chain branching, and optionally one or more additives

to form a tie-layer adhesive. 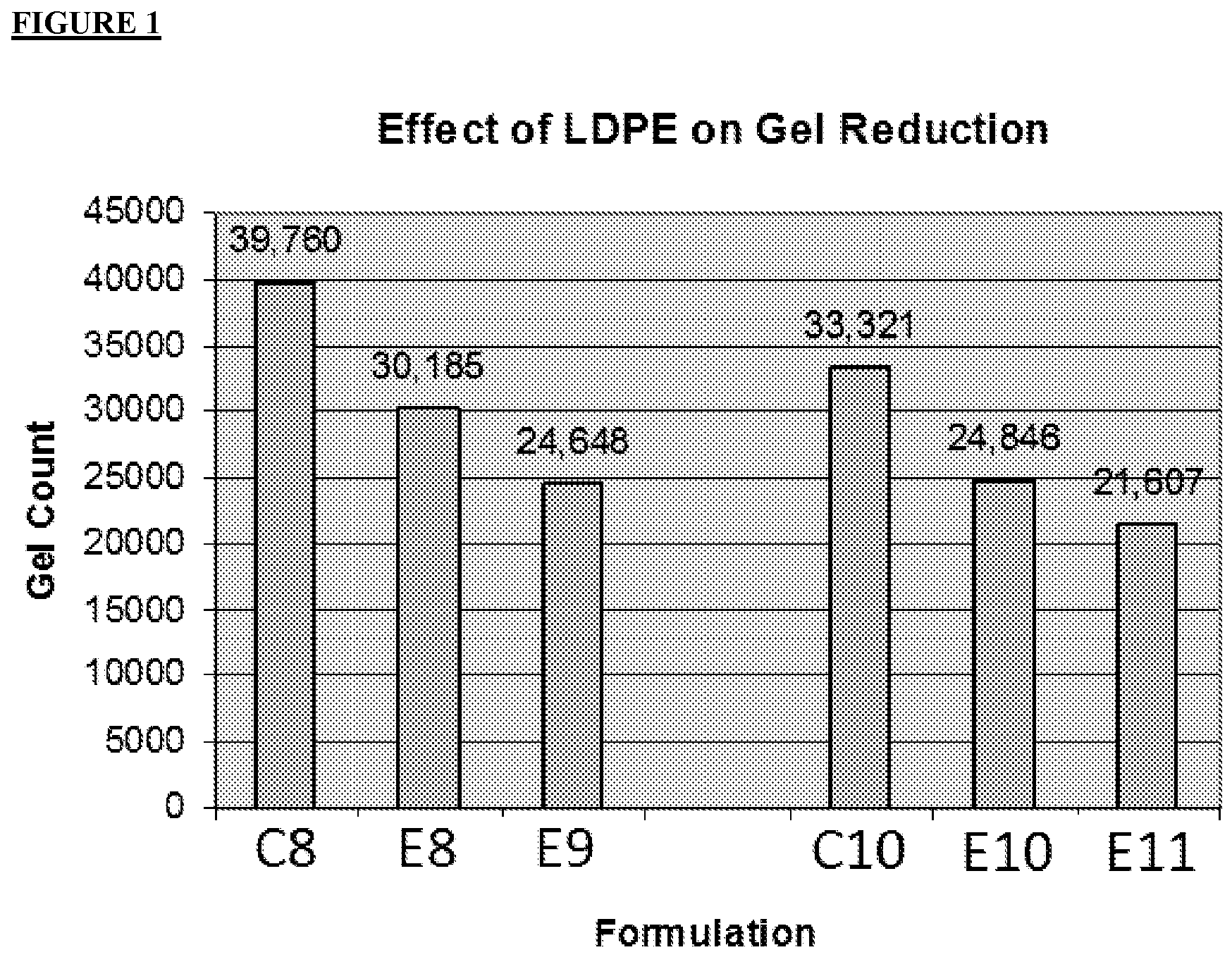