[0002] Cancer is the second most common cause of death in the United States and European Union (National Vital Statistics Reports, Vol. 60, No. 4, 2012) and the first most common cause of death among persons aged 45 to 64, for both men and women, in the European Union. The estimated cancer prevalence in the United States as of January 1, 2008 was 5,506,000 cases of invasive tumors for males and 6,452,000 cases for females.
[0003] Cancer vaccines are under investigation, with some in Phase III efficacy studies (Rosenberg et al., Nat Med., 10:909 (2004), Johnson et al., Expert Rev Anticancer Ther., 9:67 (2009)3,4). Several cancer vaccines are directed against solid tumors - melanoma, prostate, lung, breast and colorectal cancers. Two high risk populations will particularly benefit from preventive anti-cancer vaccines: the patients with surgically removed tumors belonging to cancer types that are known to have high metastatic potential (e.g., ovarian or some types of breast cancer), and also carriers of known mutations, associated with higher cancer risk (e.g., mutations in BRCA1 and BRCA2 genes for breast and ovarian cancers, RAD51 gene for ovarian cancer, etc.). Selective preventive vaccination of high-risk cohort of women is an important public health task.
[0004] p62 is a multifunctional protein that binds ubiquitin and regulates activation of the nuclear factor kappa-B (NF-kB) signaling pathway. The protein functions as a scaffolding/adaptor protein in concert with TNF receptor-associated factor 6 to mediate activation of NF-kB in response to upstream signals. Alternatively spliced transcript variants encoding either the same or different isoforms have been identified for this gene.
[0005] p62 was identified as 62-kDa protein that was binding the src homology 2 (SH2) domain of tyrosine kinase Lckp56 in a phosphotyrosine-independent manner (Parket al., Proc Natl Acad Sci U S A., 92:12338 (1995)). The primary sequence of p62 is known (Joung et al., Proc Natl Acad Sci U S A., 93:5991, (1996)), and was shown to bind ubiquitin (Vadlamudi et al., J. Biol. Chem., 271:20235 (1996)). The DNA sequence of human p62, Homo sapiens sequestosome 1 (SQSTM1), transcript variant 1, mRNA, can be accessed at NCBI Reference Sequence: NM_003900.4. The amino acid sequence of human p62, Sequestosome-1 isoform 1 [Homo sapiens], can be accessed at NCBI Reference Sequence: NP_003891.1. p62 has homology neither with ubiquitin C-terminal hydrolases nor with the S5a subunit of the 26 S proteasome complex, the only proteins known to bind to ubiquitin noncovalently. These results suggested that p62 belongs to a new class of ubiquitin-binding proteins.
[0006] p62 is a component of inclusion bodies found in protein aggregation diseases in the brain and liver: p62 is sequestered into cytoplasmic inclusion bodies, called sequestosomes. These p62-containing protein aggregates are degraded by autophagy. It was suggested that this function of p62 may have a protective effect on huntingtin-induced cell death (Bjørkøy et al., J Cell Biol., 171:603 (2005)). Mutations in p62 gene have been associated with sporadic and familial Paget disease (Jenny Chung et al., Semin Arthritis Rheum., 41:619 (2012)), a metabolic bone disease.

FIG. 3 shows a cartoon of the domain structure of human p62.

FIG. 4 shows a comparison of a time course of tumor formation in a mouse breast cancer model for mice injected with a DNA vaccine of either p62, HER2 (positive control), or vector alone (negative control).

[0094] FVB/N mice were split into three groups (15 mice per group) and immunized with either:
[0095] FVB/N females were anesthetized and, after exposure of the femoral quadriceps, injected with 100 µg DNA (1mg/mL) in saline using an insulin syringe. Mice were immunized two times (at 4 and at 2 weeks before tumor challenge). The mice were challenged intradermally with 3x105 233-VSGA1 tumor cells / 100 µl PBS buffer in the flank. In all cases, tumors were measured by determining two perpendicular diameters with a caliper three times a week. Mice were sacrificed when the tumor ulcerated or reached 1 cm in any diameter.
[0096] 100% of mice vaccinated with empty plasmid vector (negative control) have developed tumors by day 13 after challenge. Vaccination with HER2-encoding plasmid gave a 40% protection (FIG. 4). At the same time, p62-encoding plasmid demonstrated 100% protection by day 13, which gradually reduced to 70%. Consequently, the protective effect of p62-encoding plasmid in a transplantable breast cancer mouse model was demonstrated. Therefore, the preventive effect of the p62 vaccine was demonstrated for breast cancer in a mouse model. The inventors hypothesize that 100% protection could be maintained if vaccinations were continued.
[0097] Animals that were immunized with plasmid vector encoding either HER2 or p62 and did not develop tumors after the first cancer cells challenge were administered the same amount of cancer cells at day 50. All animals vaccinated with HER2-encoding plasmid developed tumors, while no tumors appeared in animals vaccinated with p62. Consequently, p62 immunization maintained immunological memory, whereas HER2 did not.

[0098] The tumors in the mice receiving the p62 vaccine contained large zones of necrosis (FIG. 5). Immune cells associated with inflammation are abundantly present within the necrotic areas.
[0099] The HER2 vaccine elicits antigen-specific adaptive immune response and massive migration of lymphocytes (CD3+ cells, tumor-infiltrating lymphocytes) into the tumor (FIG. 6). At the same time, vaccination with p62 plasmid did not significantly increase the level of tumor infiltrating lymphocytes. On the contrary, injection of p62 plasmid, but not the HER2 vaccine, increased the level of CD11B+ cells in the tumor (FIG. 6). Consequently, p62 vaccine acts through stimulation of innate immunity, unlike the HER2 vaccine.

[0100] T5 transplantable rat breast cancer was derived from a spontaneous mammary gland adenocarcinoma of a Wistar rat in R.E. Kavetsky Institute of Experimental Pathology, Oncology and Radiobiology of National Academy of Sciences of Ukraine .Two month old female Wistar rats (weight - 130-150 gm, 10 animals per group) were challenged with T5 rat mammary gland carcinoma by subcutaneous injection of 2,5x106 tumor cells/rat in 0.4 mL of PBS. Starting the next day after tumor transplantation, rats were vaccinated three times once a week (FIG. 7). Each injection contained 78 ug of pcDNA.3.1 (empty plasmid vector, negative control) or pcDNA.3.1 with p62 (experiment).
[0101] Tumor growth was inhibited by p62 immunization (FIG. 8) with a 70% tumor growth inhibition in p62-vaccinated rats compared to vector-injected control rats (p<0.004) (FIG. 9).
[0102] Survival of tumor-implanted rats (8 vector- and 8 p62-immunized) was monitored over 75 days. 50% of the animal in the control group died while there were no animal deaths in p62- vaccinated group (FIG. 10).
[0103] Histological analysis of the tumors revealed necrotic zones (FIG. 11). Intratumoral necrosis in rats receiving p62 DNA vaccine was similar to one observed in the tumors of mice receiving the p62 DNA vaccine (FIG. 12).
[0104] Consequently, the anti-tumor effect of p62 DNA vaccine was demonstrated in the second animal (rat) model, indicating that the p62 DNA vaccine can be used to treat breast cancer.

[0105] Lewis lung carcinoma is a model officially accepted by Pharmacological Committee of Russian Federation, "Russian FDA", for testing drugs for anti-metastatic effects. 100ug of plasmid was injected intramuscularly into each mice 4 weeks and 2 weeks prior to the challenge with tumor transplant, as well as 1, 8 and 15 days after the challenge. Fifteen animals per group were used. FIG. 13 shows that p62 vaccination reduced the number of metastases in lungs by 50% compared to control.
[0106] Unless otherwise defined, all technical and scientific terms used herein have the same meaning as commonly understood by one of ordinary skill in the art to which this invention belongs.
[0107] The embodiments illustratively described herein may suitably be practiced in the absence of any element or elements, limitation or limitations, not specifically disclosed herein. Thus, for example, the terms "comprising," "including," "containing," etc. shall be read expansively and without limitation. Additionally, the terms and expressions employed herein have been used as terms of description and not of limitation, and there is no intention in the use of such terms and expressions of excluding any equivalents of the features shown and described or portions thereof, but it is recognized that various modifications are possible.
[0108] Thus, it should be understood that although the invention has been specifically disclosed by preferred embodiments and optional features, modification, improvement and variation of the inventions embodied therein herein disclosed may be resorted to by those skilled in the art,. The materials, methods, and examples provided here are representative of preferred embodiments, are exemplary, and are not intended as limitations on the scope of the invention.
[0109] The invention has been described broadly and generically herein. Each of the narrower species and subgeneric groupings falling within the generic disclosure also form part of the invention. This includes the generic description of the invention with a proviso or negative limitation removing any subject matter from the genus, regardless of whether or not the excised material is specifically recited herein.
[0110] In addition, where features or aspects of the invention are described in terms of Markush groups, those skilled in the art will recognize that the invention is also thereby described in terms of any individual member or subgroup of members of the Markush group.
[0111] The above disclosure is intended only to convey an understanding of the present invention to those skilled in the art, and is not intended to be limiting. It will be appreciated that various modifications to the disclosed embodiments are possible without departing from the scope of the invention. Therefore, the scope of the present invention should be construed solely by reference to the appended claims. 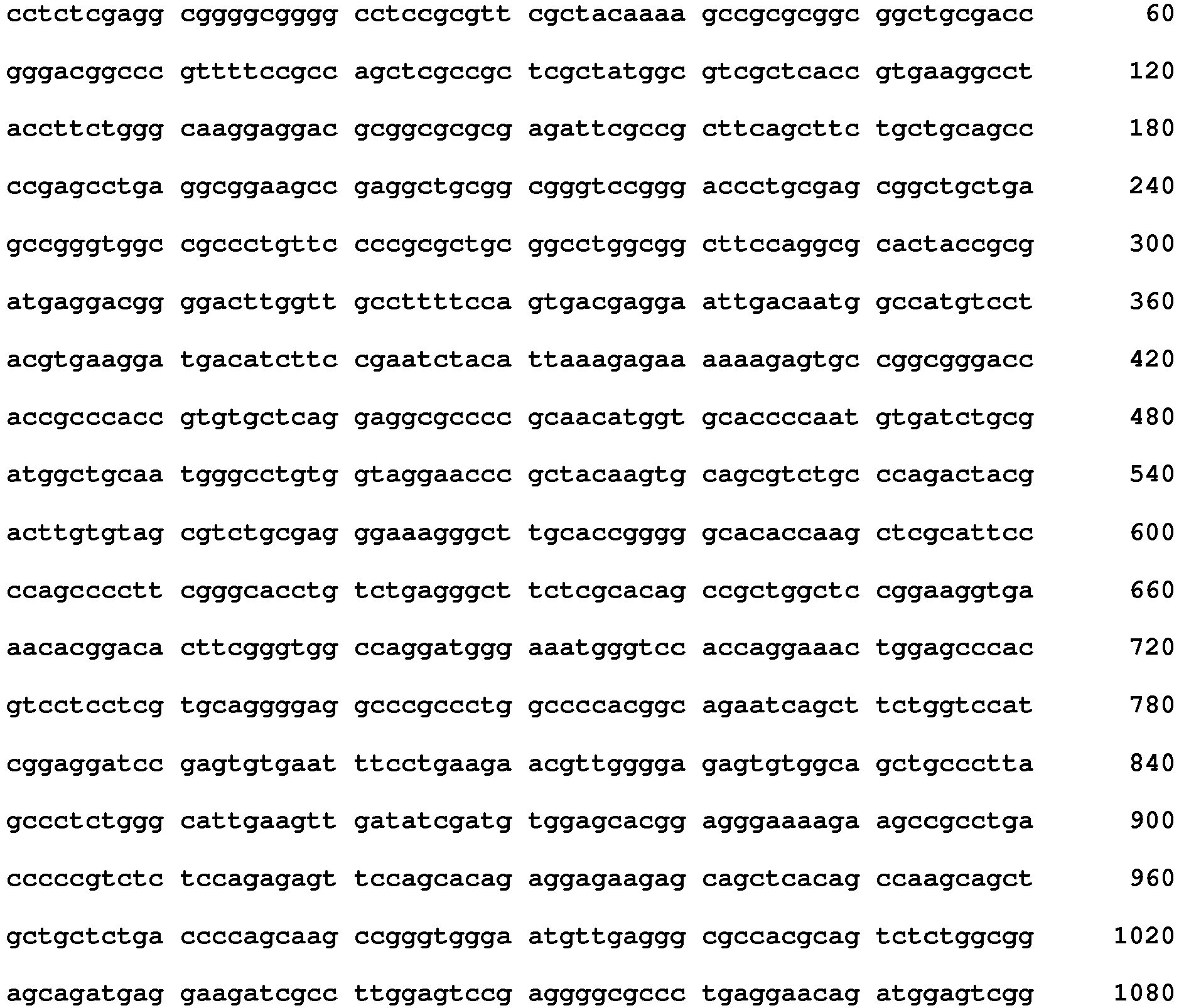 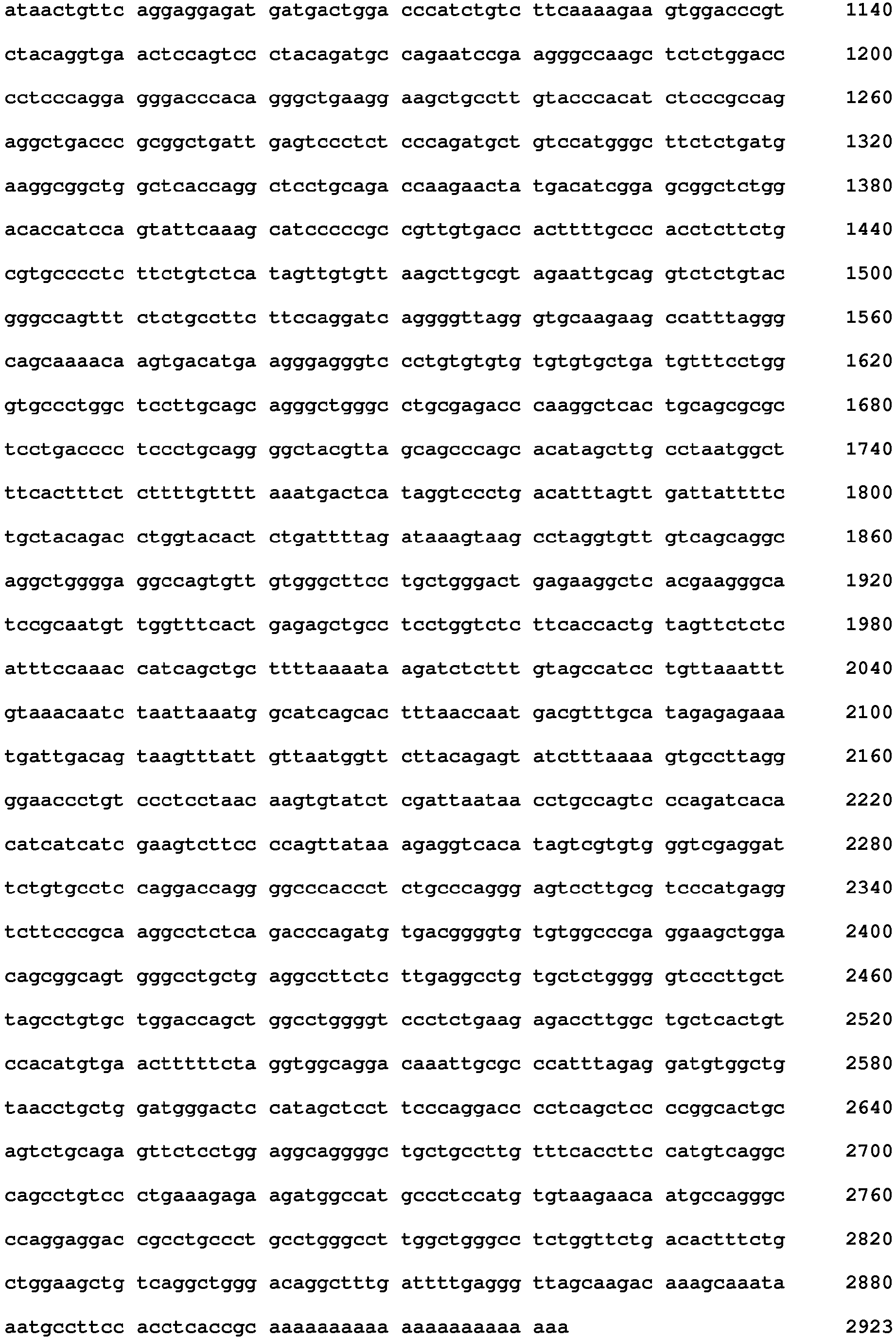 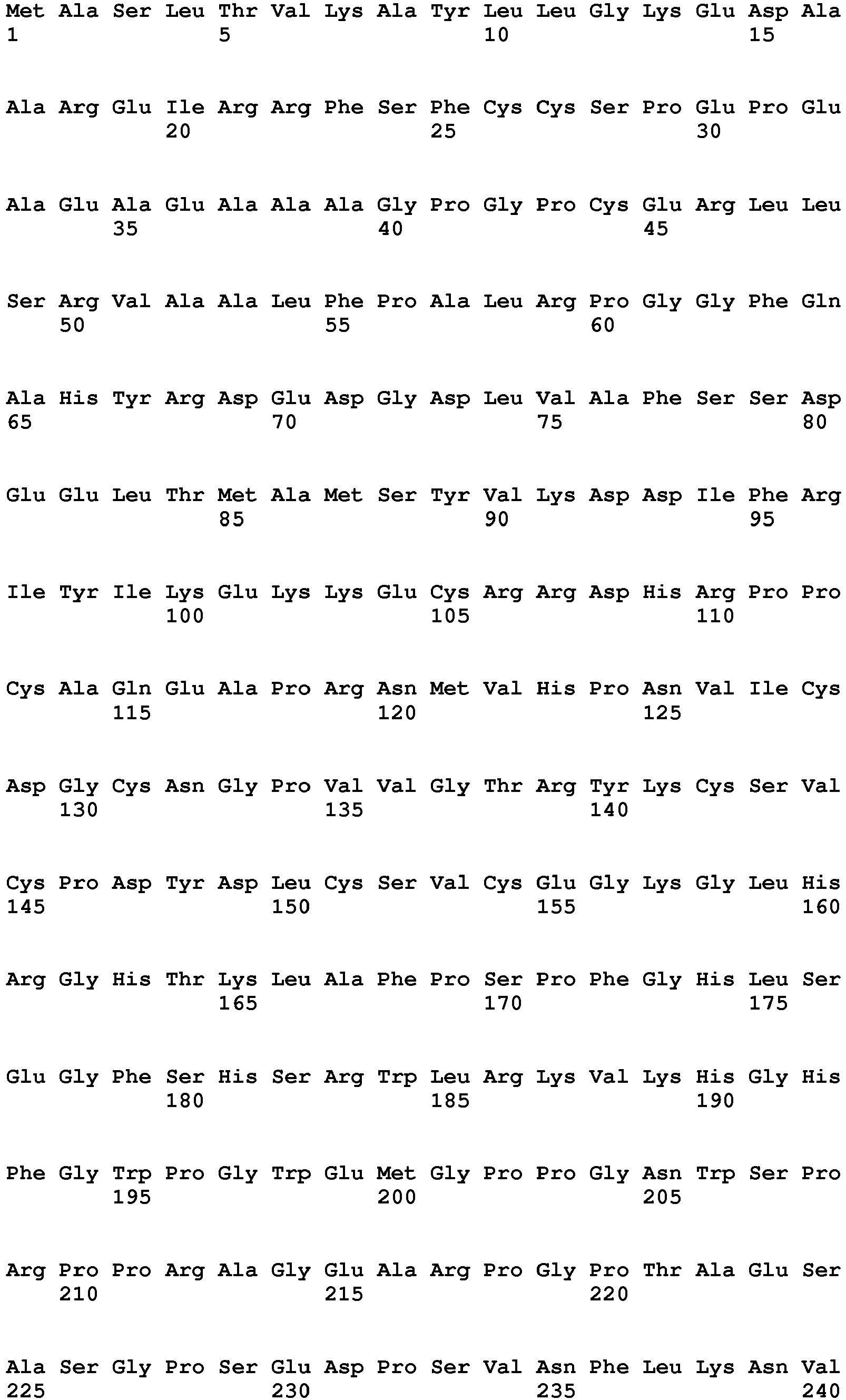 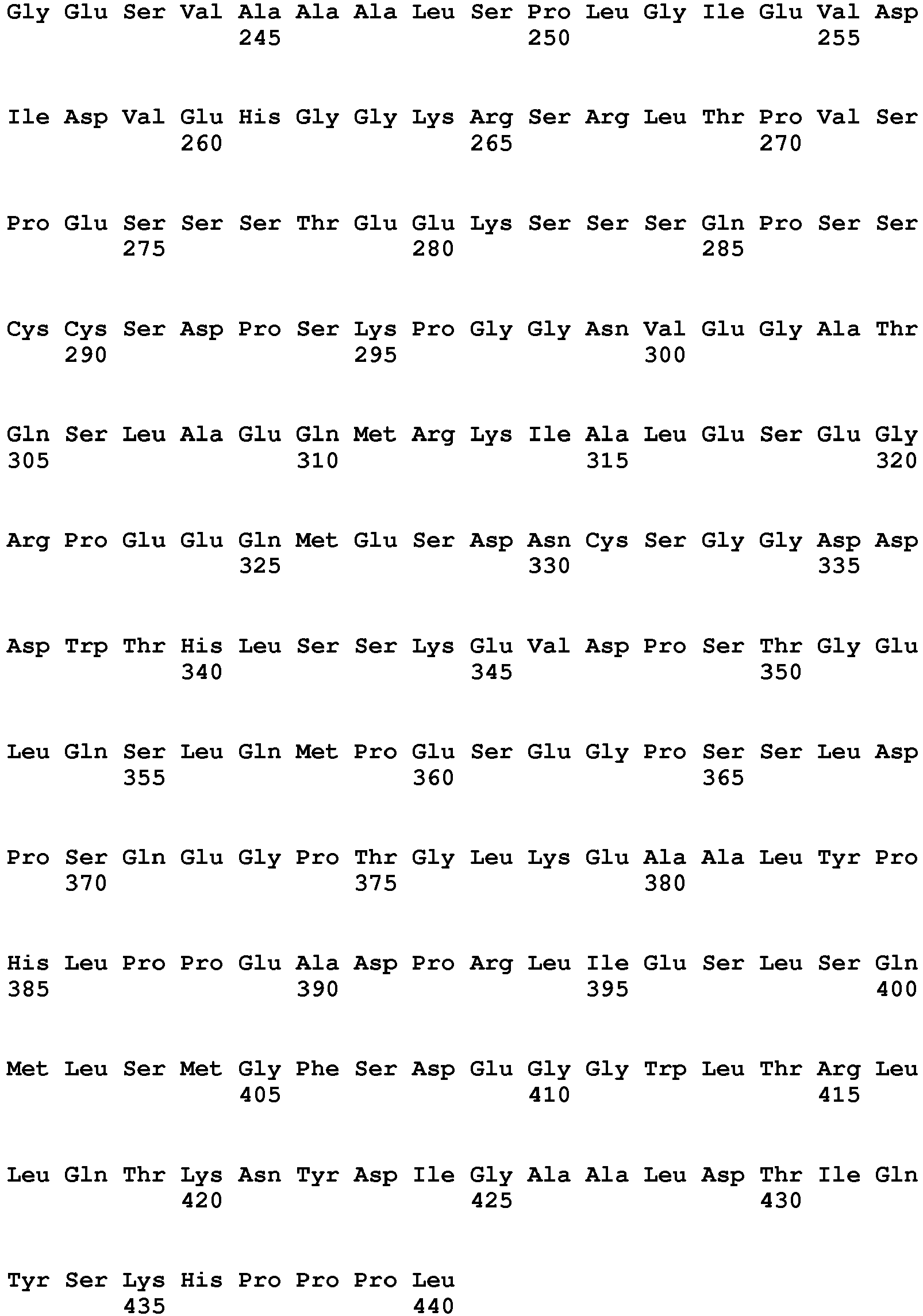 a. at least 30 consecutive amino acids of a p62/SQSTM1 polypeptide;

d. a p62/SQSTM1 polypeptide with at least one or more domain deletions;

e. a p62/SQSTM1 nucleic acid that encodes a polypeptide at least 90% identical to SEQ ID NO: 2; or

f. a p62/SQSTM1 nucleic acid that encodes a polypeptide with at least one or more domain deletions;

for use in treating, alleviating, ameliorating, relieving, delaying onset of, inhibiting progression of, reducing severity of, and/or reducing incidence of one or more symptoms of a cancer in a subject.

5. The agent for use of claim 4, wherein said adjuvant is selected from the group consisting of: gel-type, microbial, particulate, oil-emulsion, surfactant-based, and synthetic adjuvants

6. The agent for use of any one of claims 1-5, wherein said agent is for administration with one ormore anticancer therapies.

7. The agent for use of claim 6 wherein said one or more anticancer therapies is selected from the group consisting of: a chemotherapeutic molecule, radiation, and an anti-angiogenic molecule.

8. The agent for use of claim 7 wherein said chemotherapeutic molecule is selected from the group consisting of: cyclophosphamide, doxorubicin, paclitaxel, docetaxel, vinblastine, methotrexate, navelbine, capecitabine, mitomycin C and 5-fluorouracil.

12. The agent for use of claim 11 further comprising : one or more self-replicating viral replicons, one or more optimized codons, one or more CpG stimulatory motifs, one or more Marek's disease virus type 1 VP22 sequences, one or more mucosal delivery vectors, or wherein said agent is for use in in vivo electroporation or a prime-boost regimen

14. A p62 nucleic acid or polypeptide vaccine according to claim 13, further comprising an adjuvant and/or one or more co-stimulatory components and/or one or more molecules that block suppressive or negative regulatory immune mechanisms as defined in claim 4 or claim 5. 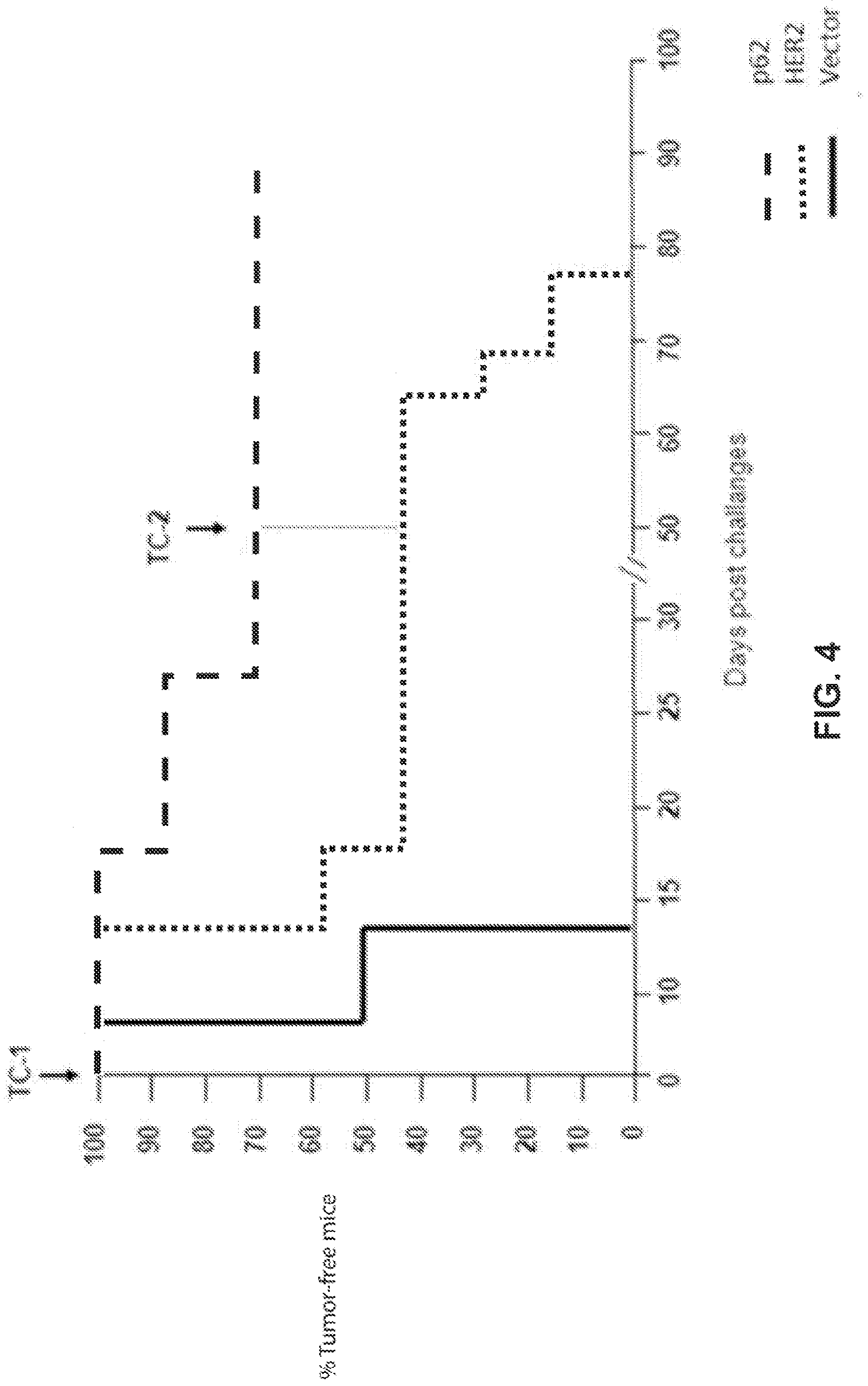 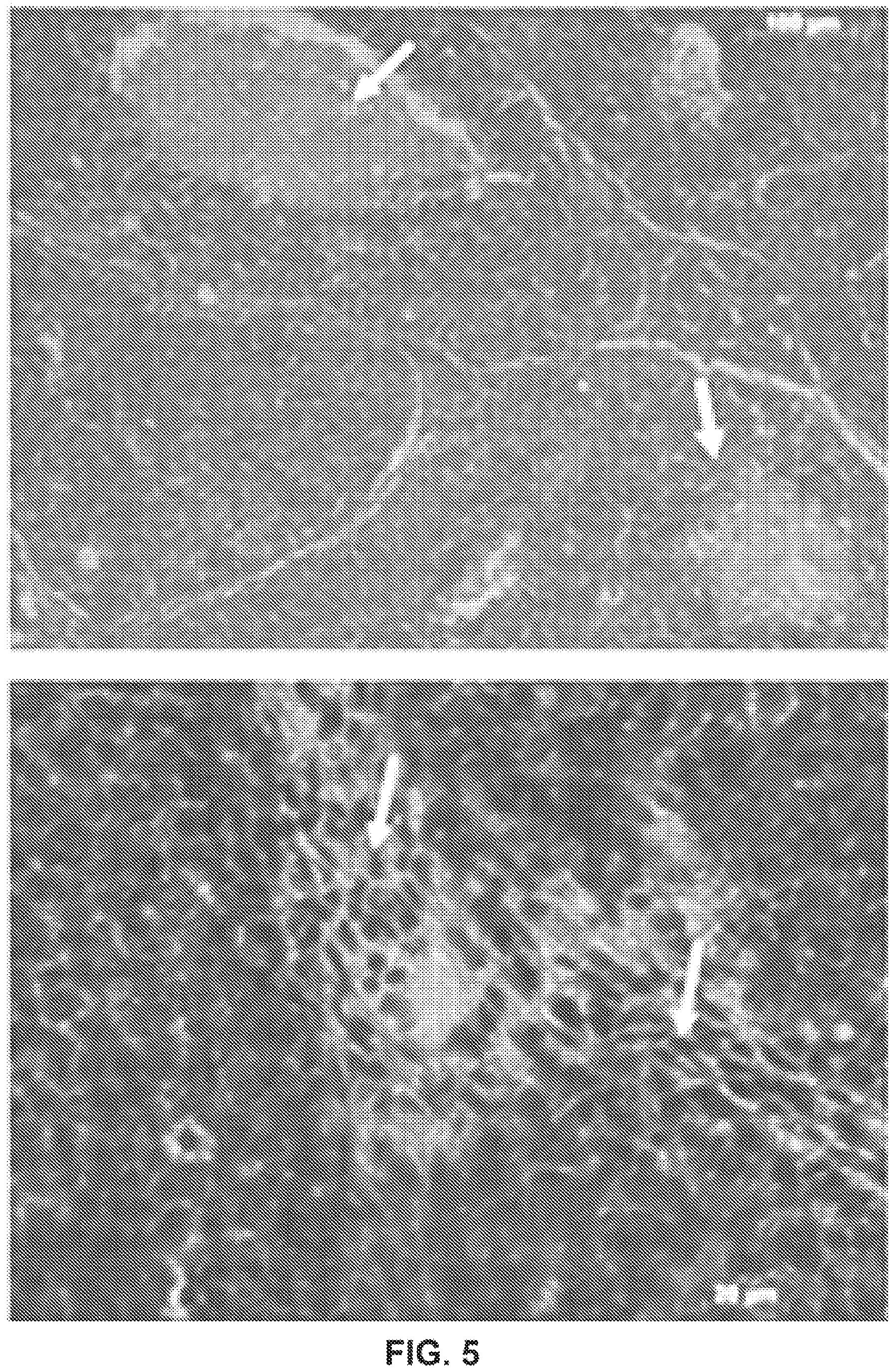 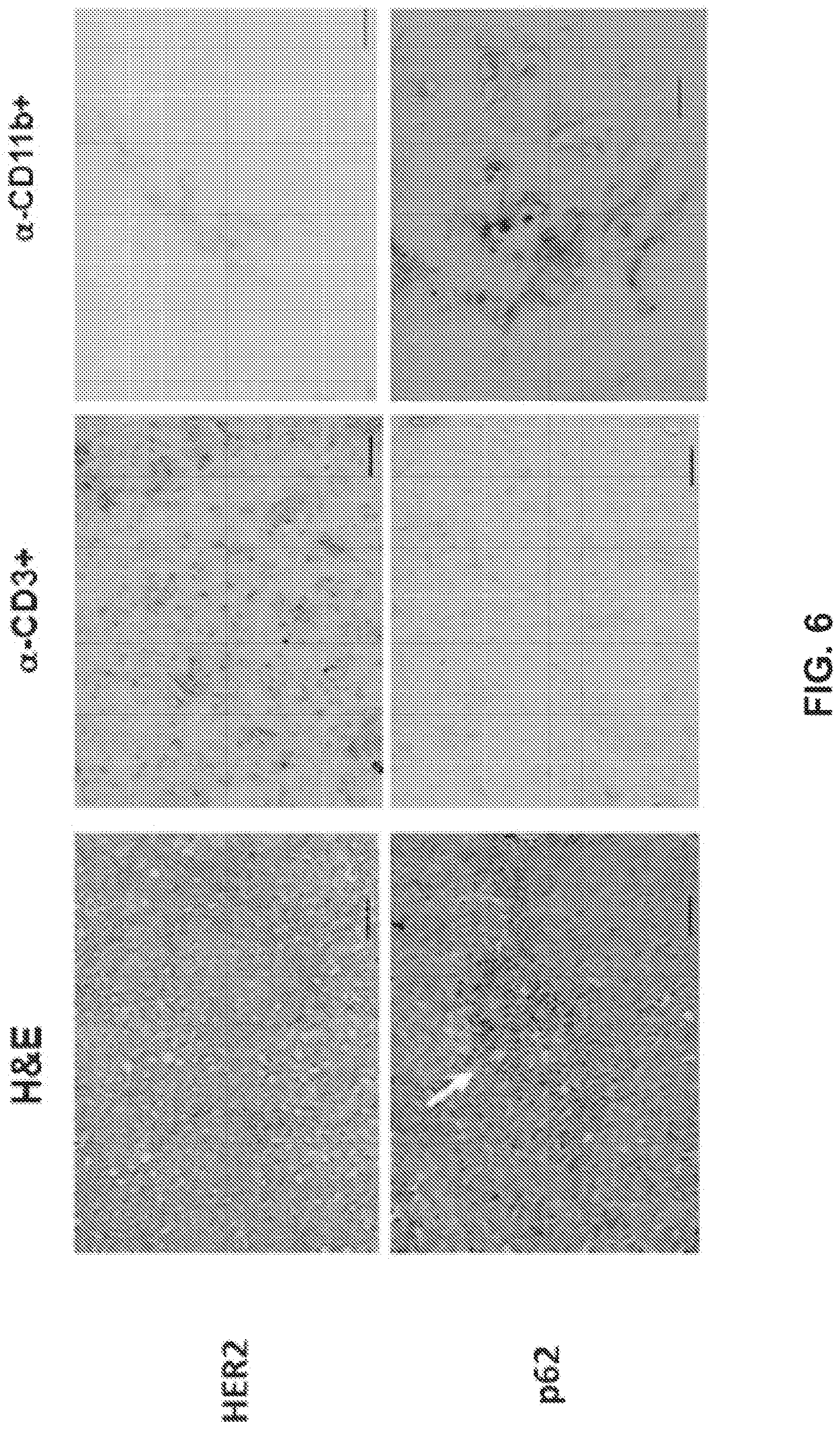 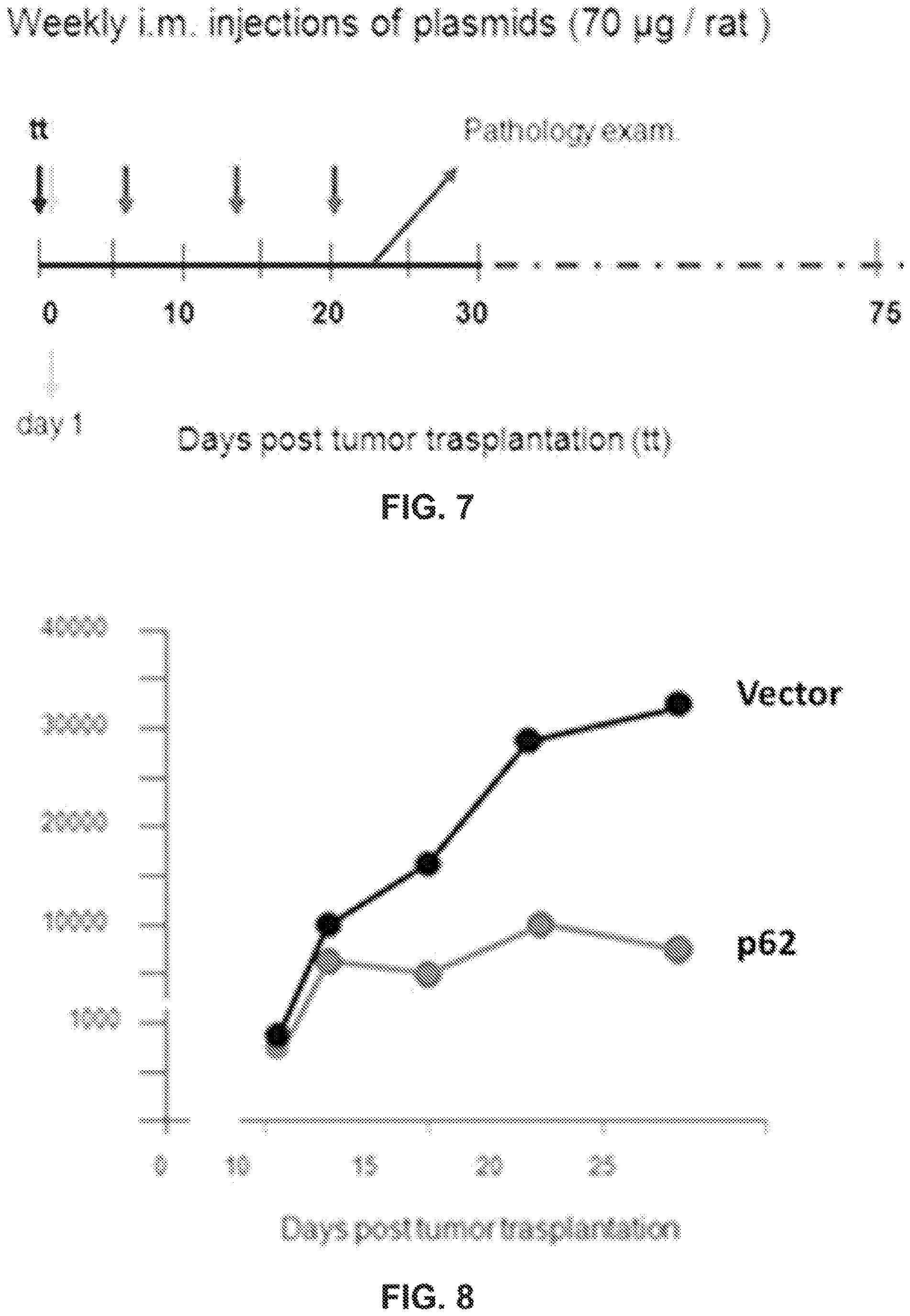 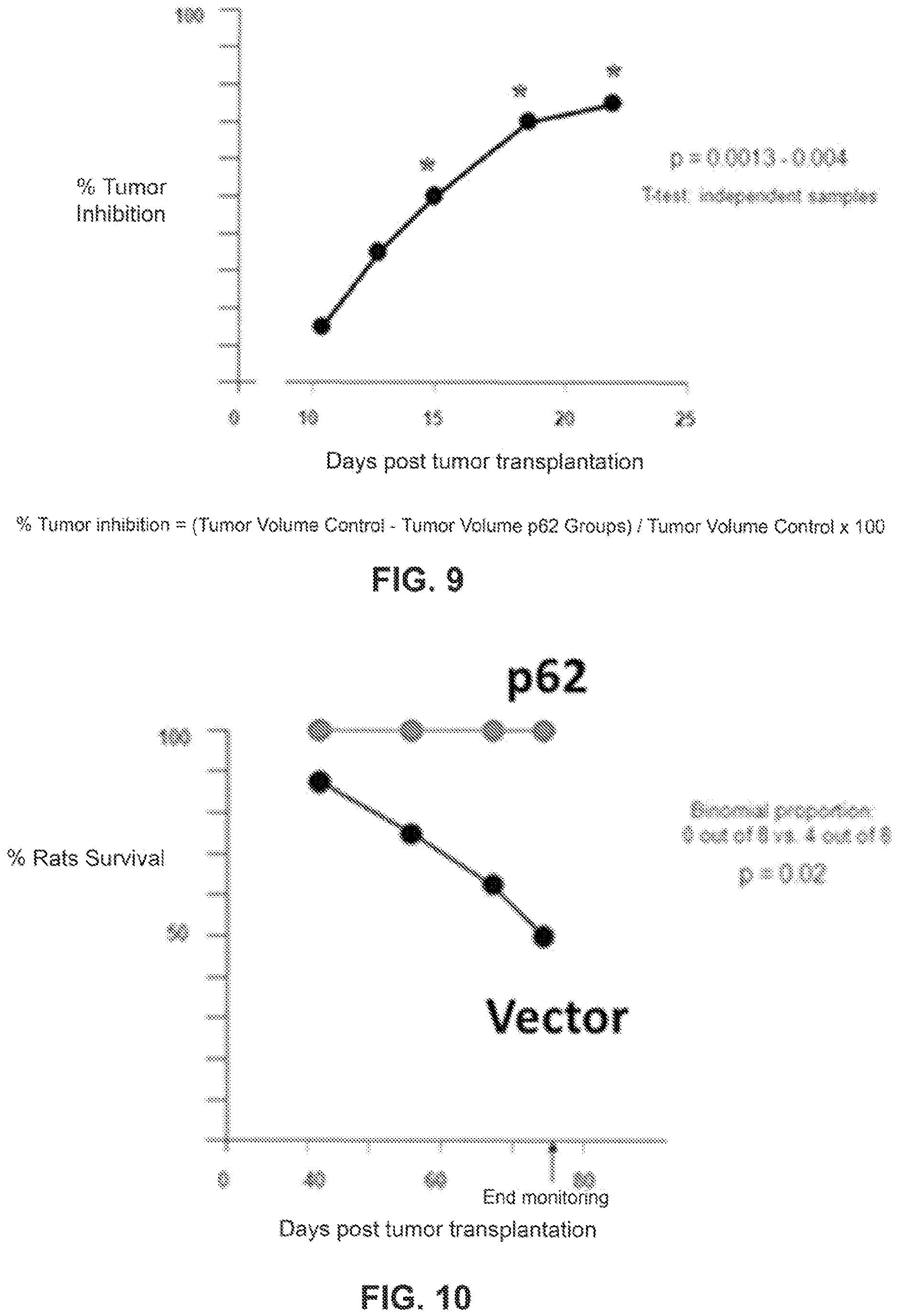 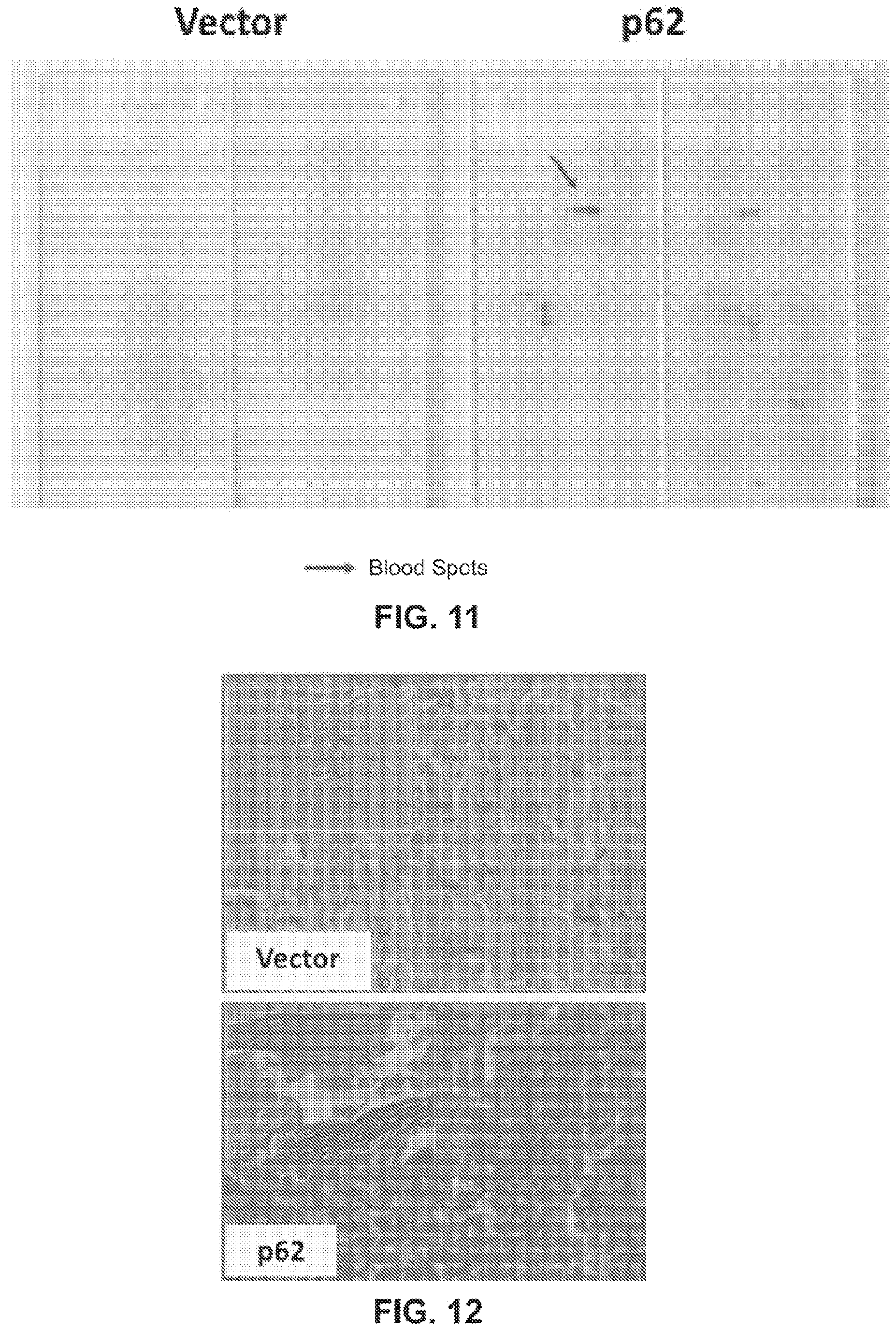 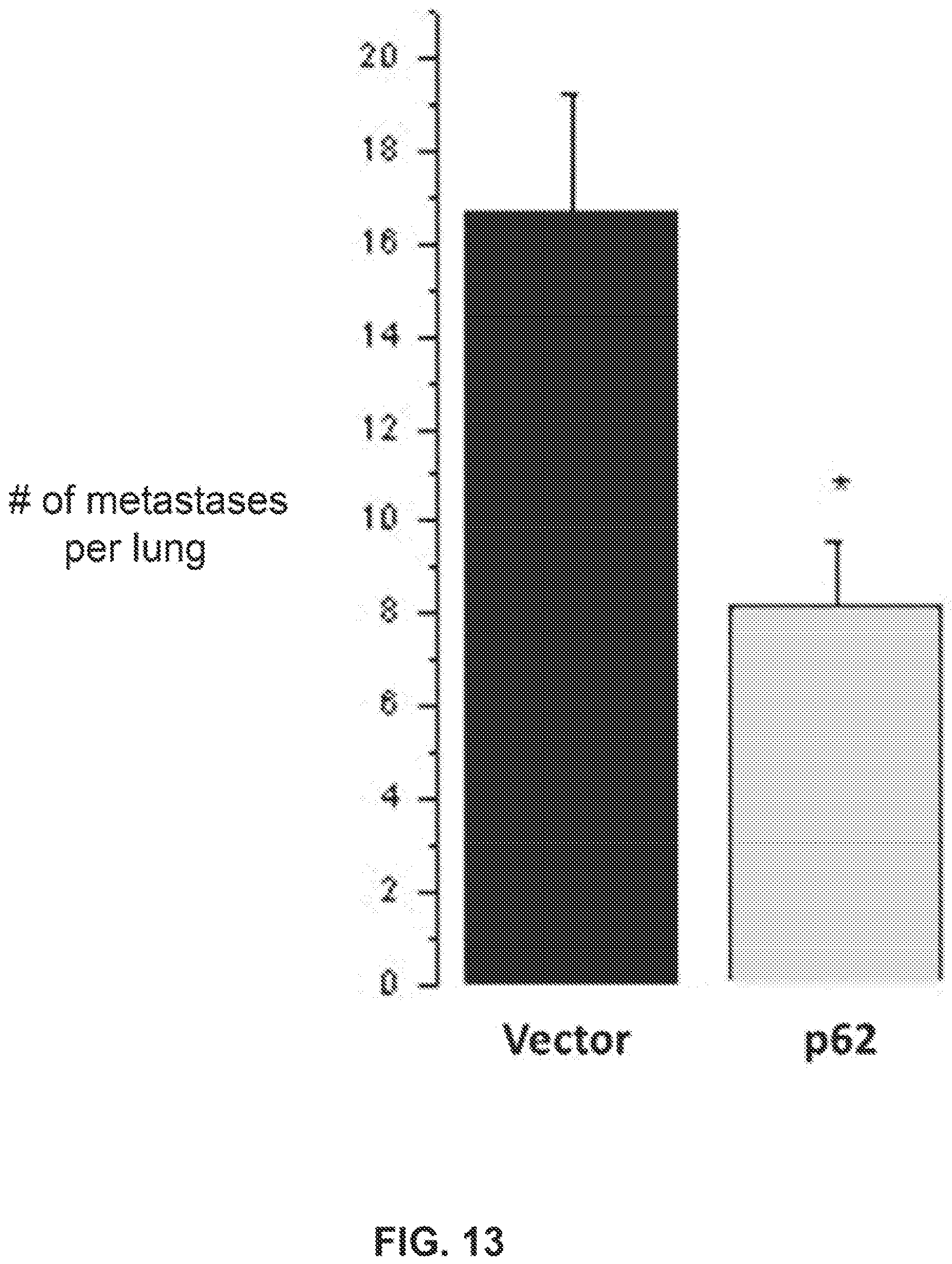