[0001] Many conventional application-launching interfaces permit users to launch applications by selecting an icon or label associated with the application. These interfaces often include these icons or labels in a flat list, a file-based hierarchy, or grouped by page. If a user wishes to find and select an application, the user scrolls through the list, searches through levels within the hierarchy, or flips through the pages until the user finds the icon or label. This process can be tedious for users, especially if the interface has many applications from which to choose.
[0002] To address this tedium, some application-launching interfaces permit users to move these icons or labels within a flat list, a file-based hierarchy, or page- oriented groups. This can aid users, as often-used applications can be oriented at the top of the flat list, at a higher level of the hierarchy, or in the first or second page of the page-oriented groups.
[0003] Moving icons or labels within these application-launching interfaces, however, can be tedious and confusing. A user wishing to move an icon from a sixth page of icons, for example, may need to select the icon, select to move to a desired other page, once in that desired page drop the icon at the end of the page, move other icons in that desired page around manually to a desired arrangement within the page, and then go back to the sixth page to manually arrange the icons remaining in the sixth page.
[0004] The document "Android Apps in Depth - 02 Go Launcher EX" by Williw D., 6 March 2011, XP055215942, Retrieved from the Internet: URL: http://www.youtube.com/watch?v=u5LISE8BU_E and the document "In Depth: GO Launcher EX | Droid Life" by Matt Demers, 26 January 2011, XP055215942, Retrieved from the Internet: URL: http://www.droid-life.com/2011/01/26/in-depth-go-launcher-ex disclose a method for moving an icon from one home screen to another, by a user dragging the icon to a screen area labelled "move to screen"; in response, a grid of reduced-size home screens is displayed, wherein the user can drop the icon onto a specific home screen for the icon to appear there.

[0005] This document describes techniques and apparatuses for arranging tiles. These techniques and apparatuses enable users to quickly and easily arrange tiles within an interface, such as an application-launching interface. In some cases, users may arrange tiles in an interface with as little as one continuous gesture.
[0006] This summary is provided to introduce simplified concepts for arranging tiles that are further described below in the Detailed Description and/or shown in the Figures. This summary is not intended to identify essential features of the claimed subject matter, nor is it intended for use in determining the scope of the claimed subject matter. The term "techniques" as used herein can include devices, systems, apparatuses, operations, and/or methods as permitted by the context in which the term is used.

[0007] Embodiments for arranging tiles are described with reference to the following drawings. The same numbers are used throughout the drawings to reference like features and components:

Fig. 1 illustrates an example system in which techniques for arranging tiles can be implemented.

Fig. 4 illustrates the example application-launching interface of Fig. 3 with an example gesture selection of a tile, the gesture moving the tile to a region of the interface.

Fig. 5 illustrates the interface of Fig. 3 having multiple different groups of tiles at lower resolution.

Fig. 7 illustrates a view zooming in to show, at a higher resolution, the multiple tiles of the group shown in Fig. 6.

Fig. 8 illustrates a selection to move a tile from a current location to a region of a user interface having a marked area.

Fig. 9 illustrates an example method for automatically reflowing tiles, which may be used separate from or in conjunction with the method of
Fig. 2.

Fig. 10 illustrates an array of tiles having multiple columns and rows.

Fig. 11 illustrates an automatic reflow of tiles of the array of Fig. 10 in response to movement of a tile.

Fig. 12 illustrates an automatic reflow of the array of Fig. 10 and a sub-array in response to movement of a small tile within the sub-array.

Fig. 13 illustrates an example device in which techniques for arranging tiles can be implemented.

[0010] Fig. 1 illustrates an example system 100 in which techniques for arranging tiles can be embodied. System 100 includes a computing device 102, which is illustrated with six examples: a laptop computer 104, a tablet computer 106, a smart phone 108, a set-top box 110, a desktop computer 112, and a gaming device 114, though other computing devices and systems, such as servers and netbooks, may also be used.
[0011] Computing device 102 includes computer processor(s) 116 and computer-readable storage media 118 (media 118). Media 118 includes an operating system 120, windows-based mode module 122, immersive mode module 124, manager 126, and applications 128. Computing device 102 also includes or has access to one or more displays 130, four examples of which are illustrated in Fig. 1.
[0012] Windows-based mode module 122 is capable of presenting applications 128 through windows having frames. These frames may provide controls through which to interact with an application and/or controls enabling a user to move and size the window.
[0013] Immersive mode module 124 provides a mode by which a user may view and interact with applications 128. In some embodiments, this mode presents content of, and enables interaction with, applications with little or no window frame and/or without a need for a user to manually size or position content. This mode can be, but is not required to be, hosted and/or surfaced without use of a typical desktop (e.g., windows-based) mode. Thus, in some cases immersive mode module 124 presents an immersive mode that is not a window (even one without a substantial frame) and precludes usage of desktop-like displays (e.g., a taskbar). Further still, in some embodiments this immersive mode is similar to an operating system in that it is not closeable or capable of being un-installed.
[0014] Manager 126 provides an application-selection interface that permits selection to launch, present, or revisit applications 128, whether of windows-based or immersive modes, and itself can be presented in a windows-based or immersive mode. Manager 126 also enables users to arrange tiles within the application-selection interface. Note that while system 100 and manager 126 are described in the context of application-selection interfaces, manager 126 may operate to arrange tiles, icons, or labels in other contexts, such as file systems, image retrieval systems, document retrieval systems, and the like.
[0015] Operating system 120, mode modules 122 and 124, and manager 126 can be separate from each other or combined or integrated in some form. Thus, in some cases operating system 120 includes mode modules 122 and 124 and manager 126.

[0050] Fig. 13 illustrates various components of an example device 1300 that can be implemented as any of the devices, or services and operations implemented by the devices, described with reference to the previous Figs. 1-12. In some embodiments, device 1300 can be implemented as one or a combination of a wired and/or wireless device, as a form of television client device (e.g., television set-top box, digital video recorder (DVR), etc.), consumer device, computer device, server device, portable computer device, user device, communication device, video processing and/or rendering device, appliance device, gaming device, electronic device, and/or as another type of device. Device 1300 may also be associated with a user (e.g., a person) and/or an entity that operates the device such that a device describes logical devices that include users, software, firmware, and/or a combination of devices.
[0051] Device 1300 includes communication devices 1302 that enable wired and/or wireless communication of device data 1304 (e.g., received data, data that is being received, data scheduled for broadcast, data packets of the data, etc.). The device data 1304 or other device content can include configuration settings of the device, media content stored on the device, and/or information associated with a user of the device. Media content stored on device 1300 can include any type of audio, video, and/or image data. Device 1300 includes one or more data inputs 1306 via which any type of data, media content, and/or inputs can be received, such as user-selectable inputs, messages, music, television media content, recorded video content, and any other type of audio, video, and/or image data received from any content and/or data source.
[0052] Device 1300 also includes communication interfaces 1308, which can be implemented as any one or more of a serial and/or parallel interface, a wireless interface, any type of network interface, a modem, and as any other type of communication interface. The communication interfaces 1308 provide a connection and/or communication links between device 1300 and a communication network by which other electronic, computing, and communication devices communicate data with device 1300.
[0053] Device 1300 includes one or more processors 1310 (e.g., any of microprocessors, controllers, and the like), which process various computer-executable instructions to control the operation of device 1300 and for arranging tiles. Alternatively or in addition, device 1300 can be implemented with any one or combination of hardware, firmware, or fixed logic circuitry that is implemented in connection with processing and control circuits which are generally identified at 1312. Although not shown, device 1300 can include a system bus or data transfer system that couples the various components within the device. A system bus can include any one or combination of different bus structures, such as a memory bus or memory controller, a peripheral bus, a universal serial bus, and/or a processor or local bus that utilizes any of a variety of bus architectures.
[0054] Device 1300 also includes computer-readable storage media 1314, such as one or more memory devices that enable persistent and/or non-transitory data storage (i.e., in contrast to mere signal transmission), examples of which include random access memory (RAM), non-volatile memory (e.g., any one or more of a read-only memory (ROM), flash memory, EPROM, EEPROM, etc.), and a disk storage device. A disk storage device may be implemented as any type of magnetic or optical storage device, such as a hard disk drive, a recordable and/or rewriteable compact disc (CD), any type of a digital versatile disc (DVD), and the like. Device 1300 can also include a mass storage media device 1316.
[0055] Computer-readable storage media 1314 provides data storage mechanisms to store the device data 1304, as well as various device applications 1318 and any other types of information and/or data related to operational aspects of device 1300. For example, an operating system 1320 can be maintained as a computer application with the computer-readable storage media 1314 and executed on processors 1310. The device applications 1318 may include a device manager, such as any form of a control application, software application, signal-processing and control module, code that is native to a particular device, a hardware abstraction layer for a particular device, and so on.
[0056] The device applications 1318 also include any system components or modules to implement techniques for arranging tiles. In this example, the device applications 1318 can include windows-based mode module 122, immersive mode module 124, and manager 126.

receiving (206) another selection moving the selected tile to a new location (602) in the second view;

indicating in the third view, prior to receiving the further selection and responsive to the selected tile being moved around a group of tiles, valid locations between or adjacent to the one or more of the multiple other tiles at which the selected tile can be placed; and

placing (212) the selected tile at the new location. 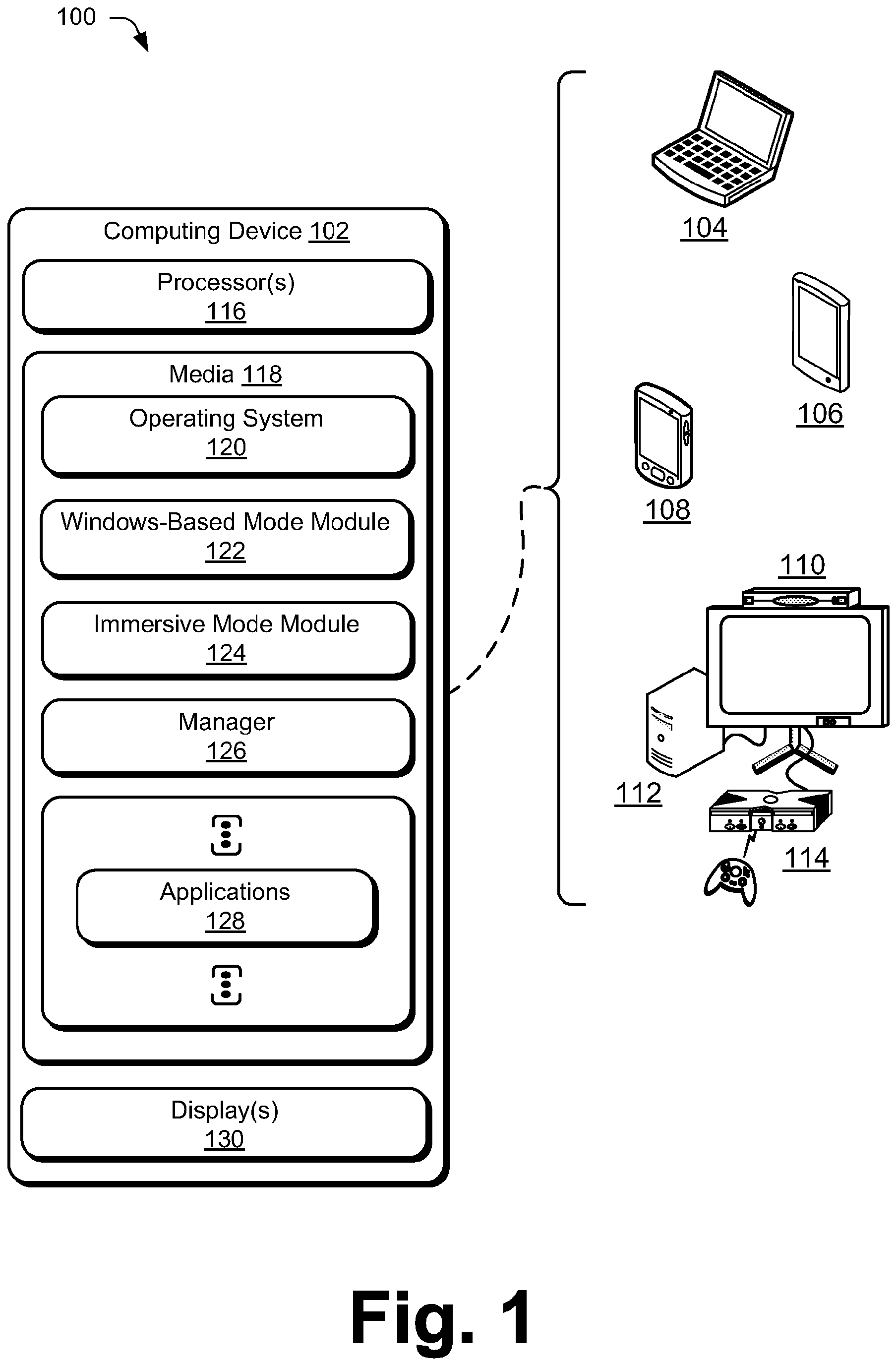 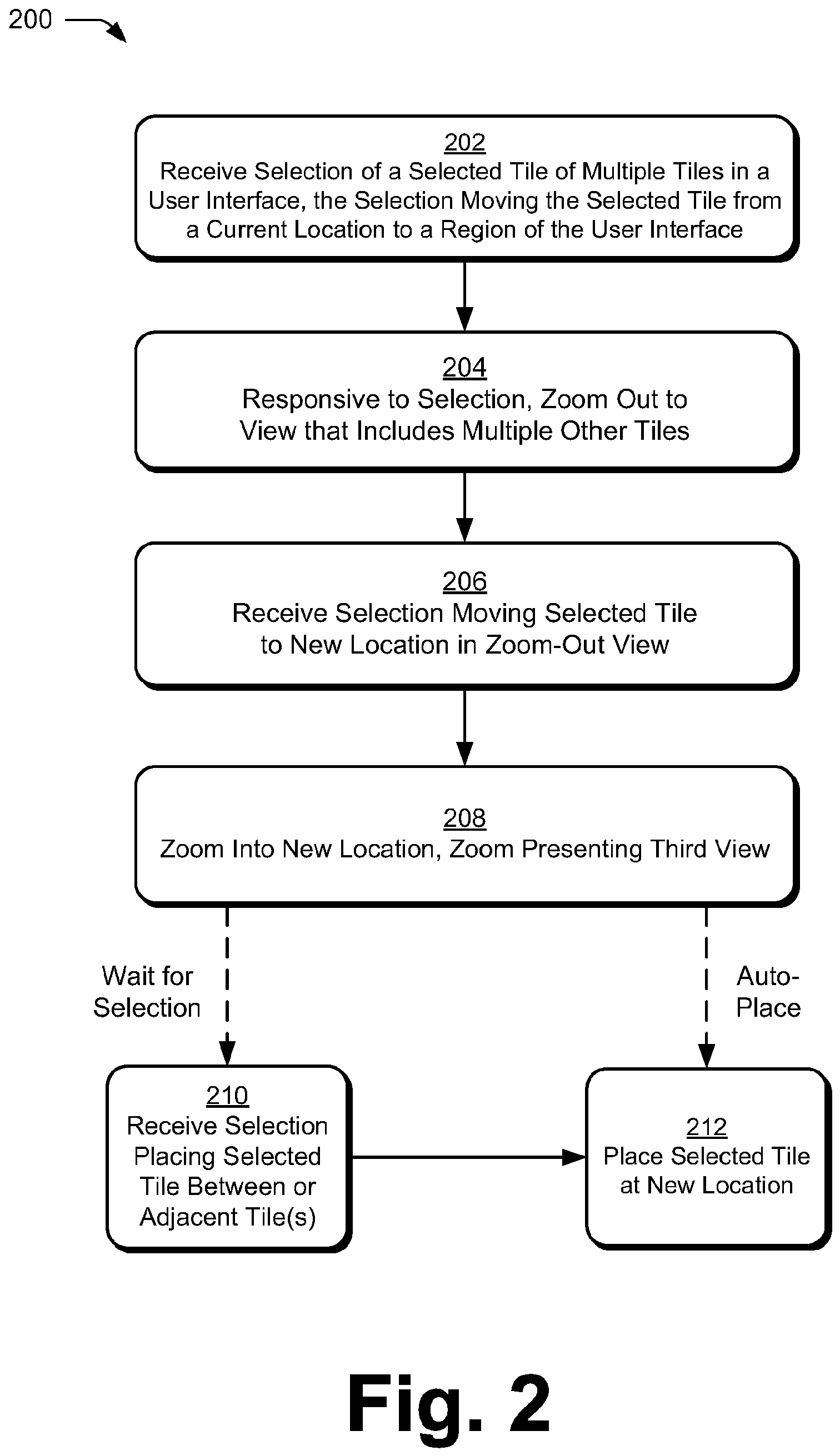 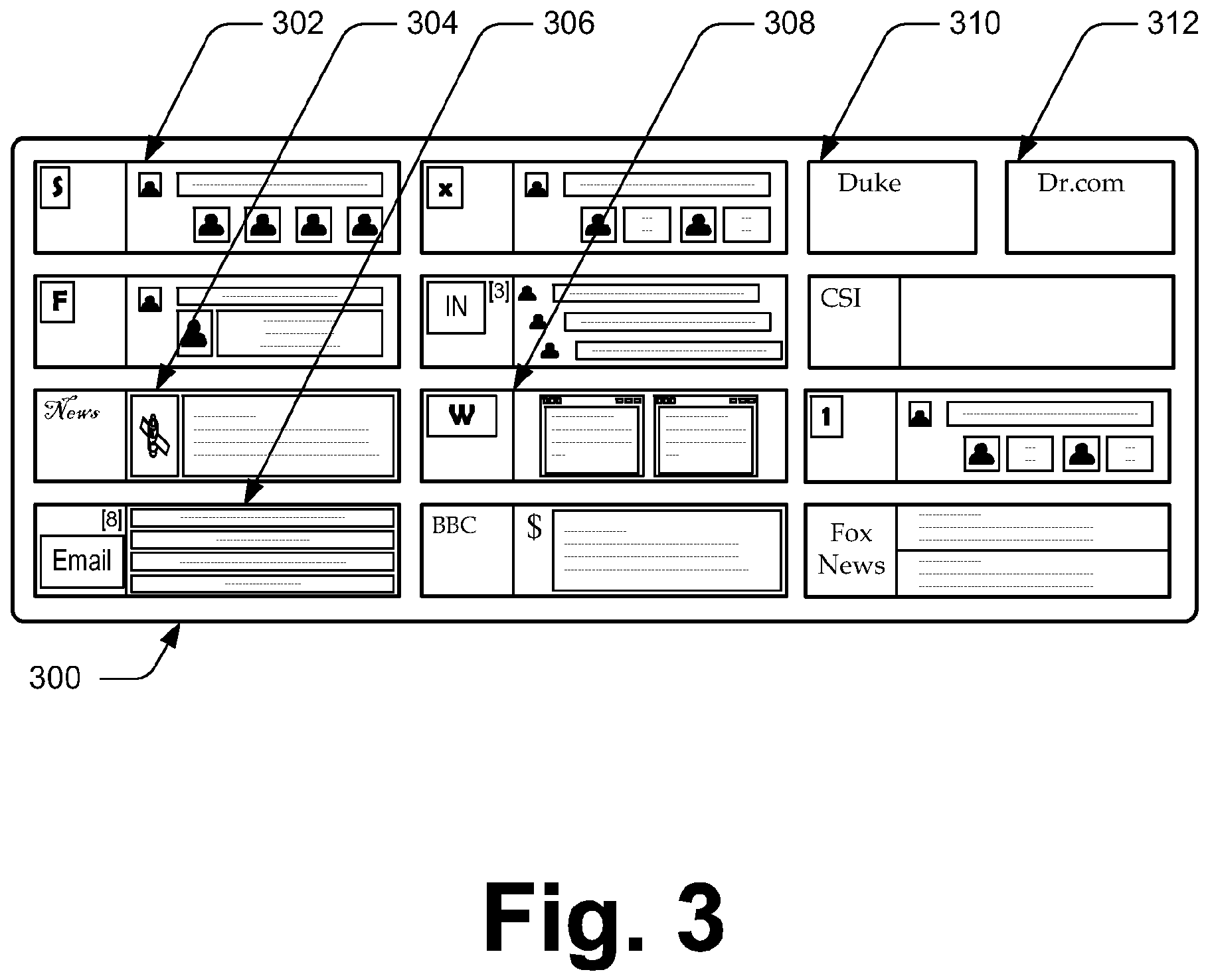 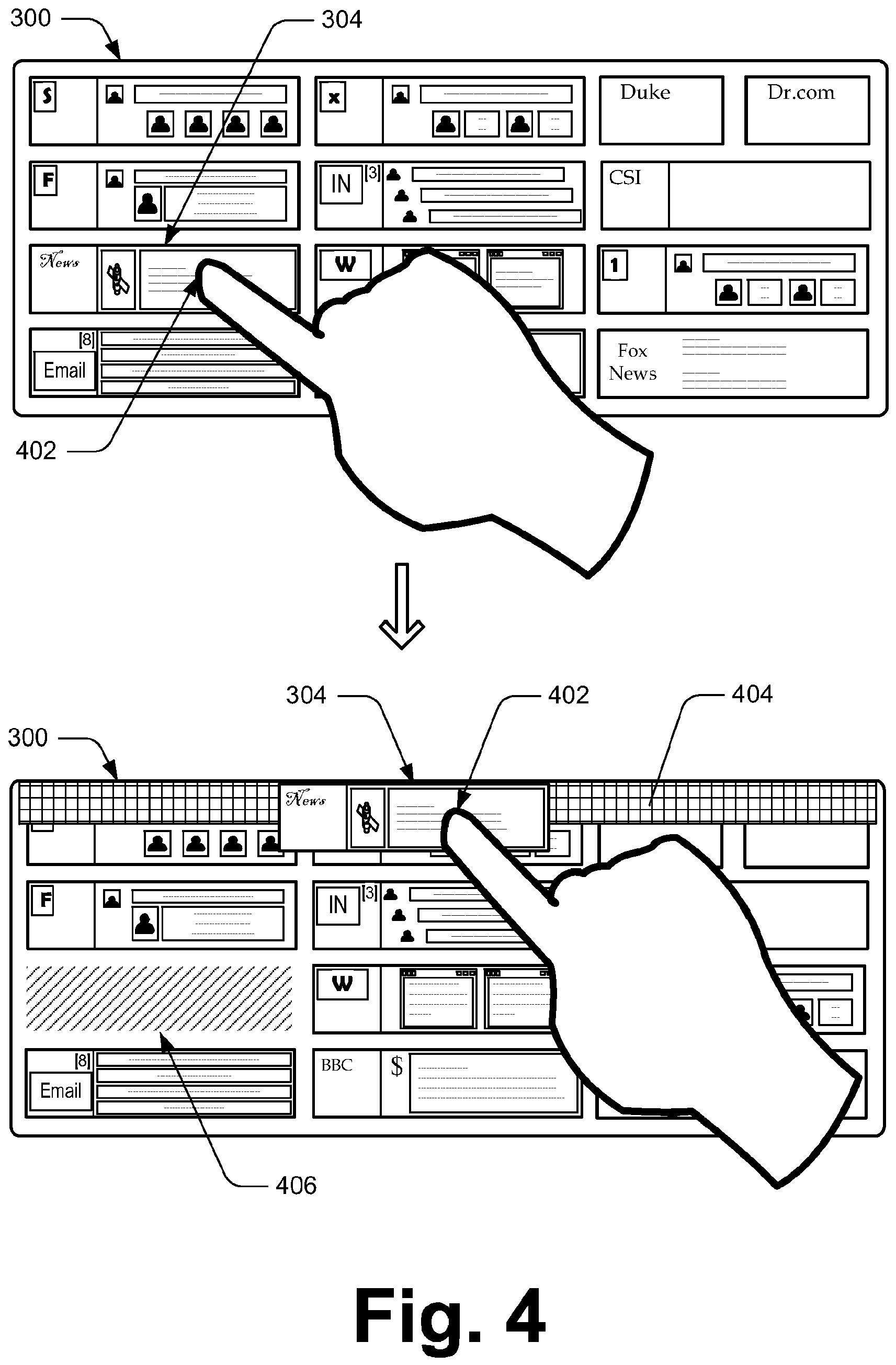 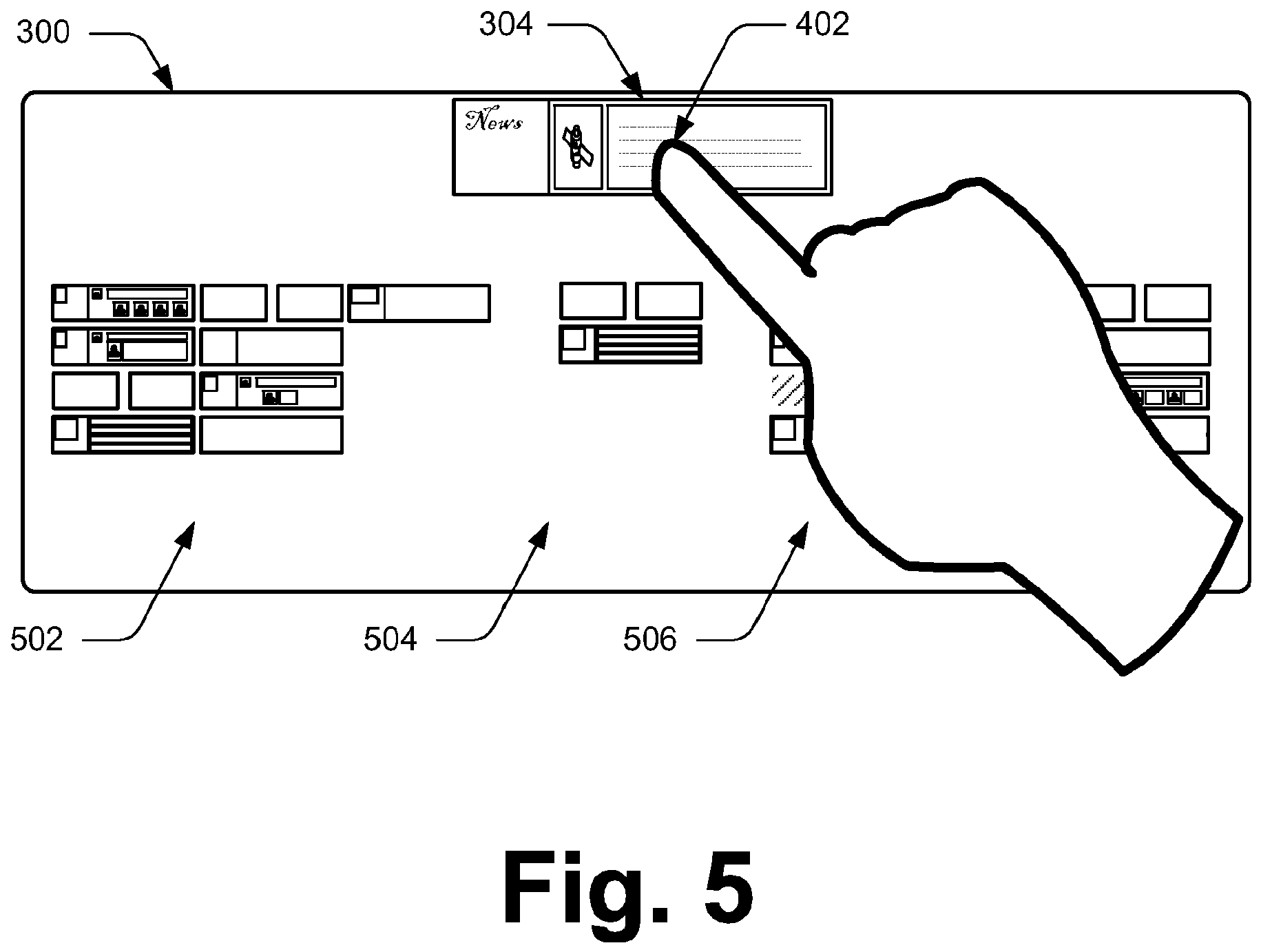 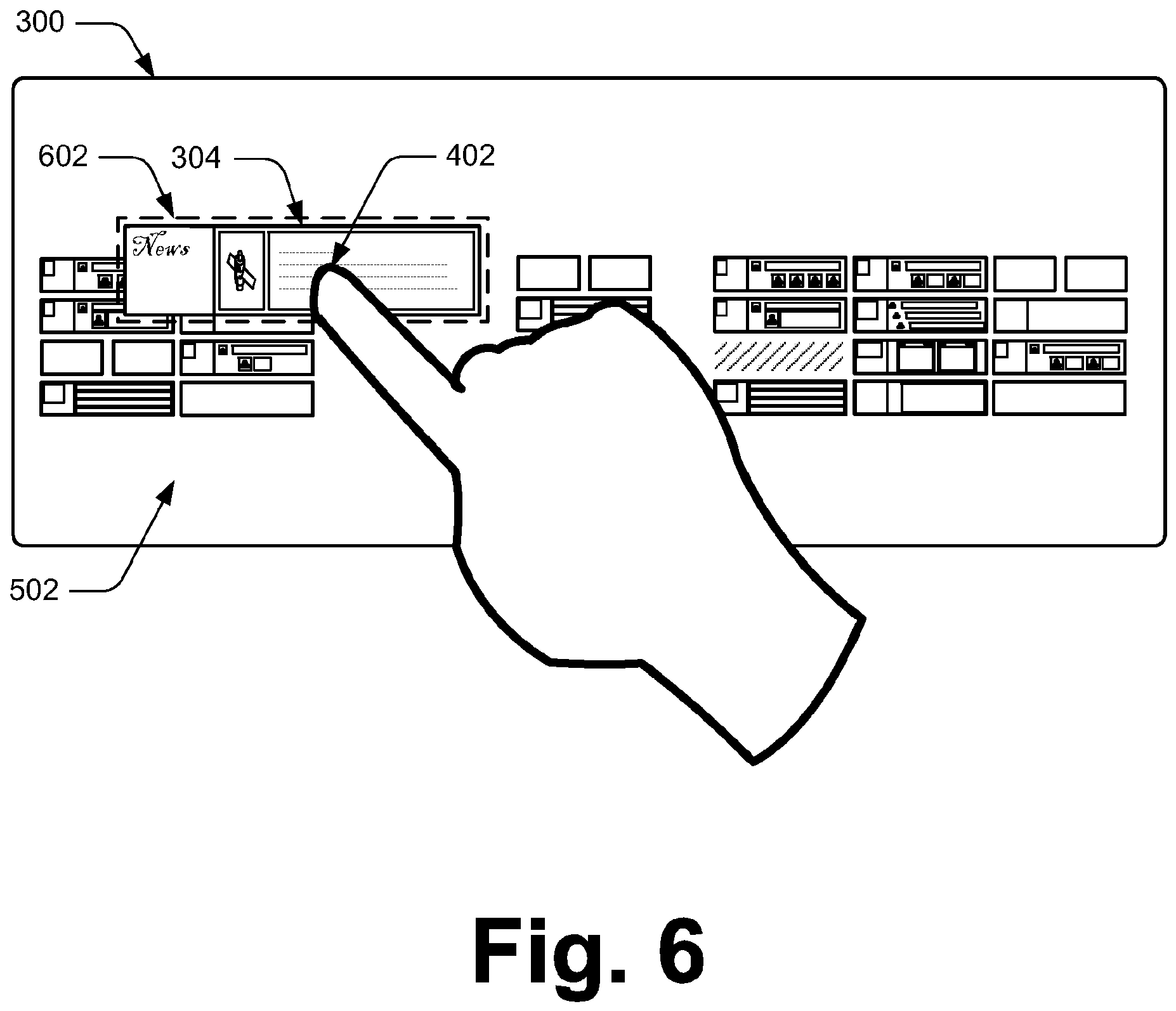 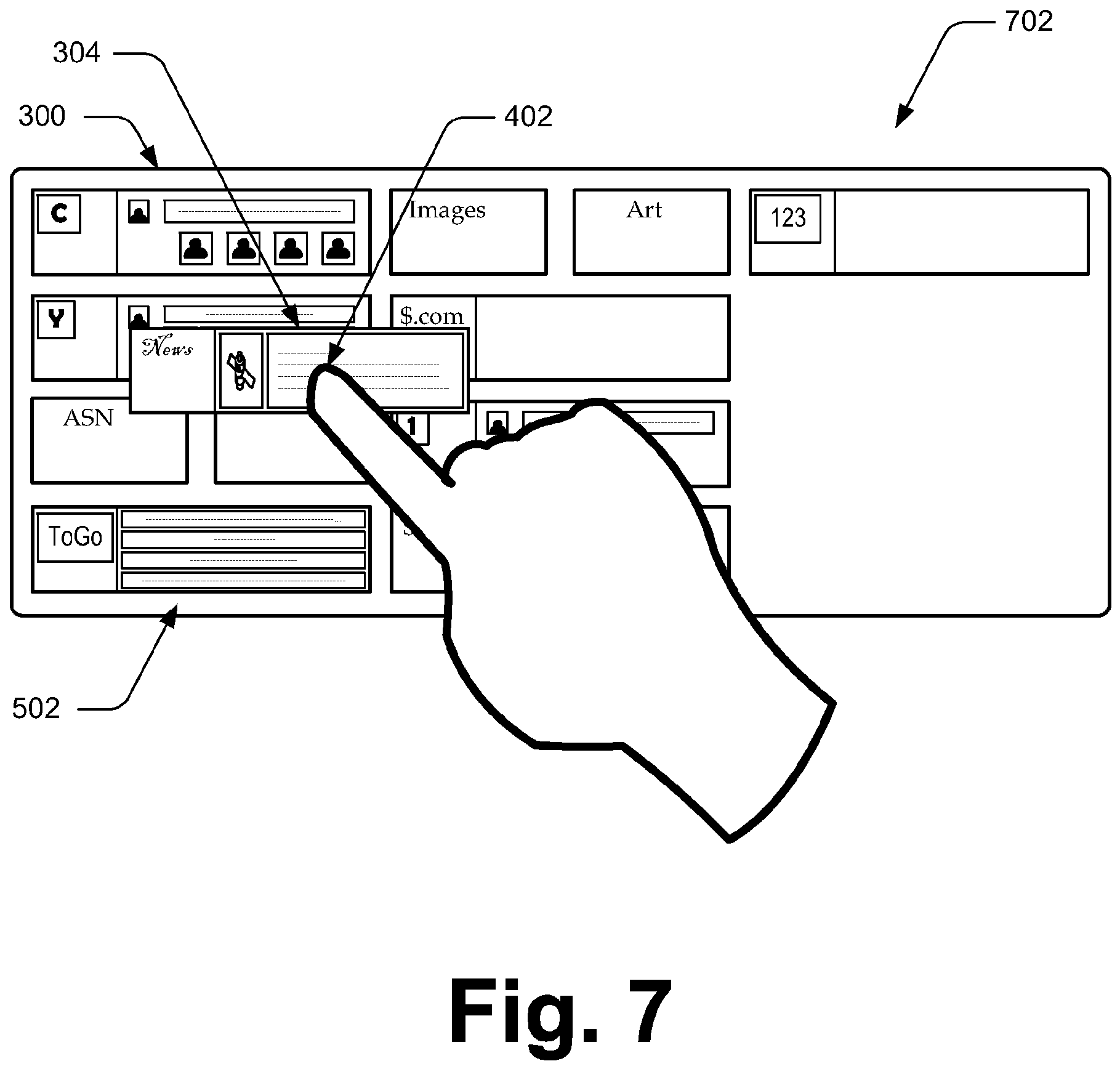 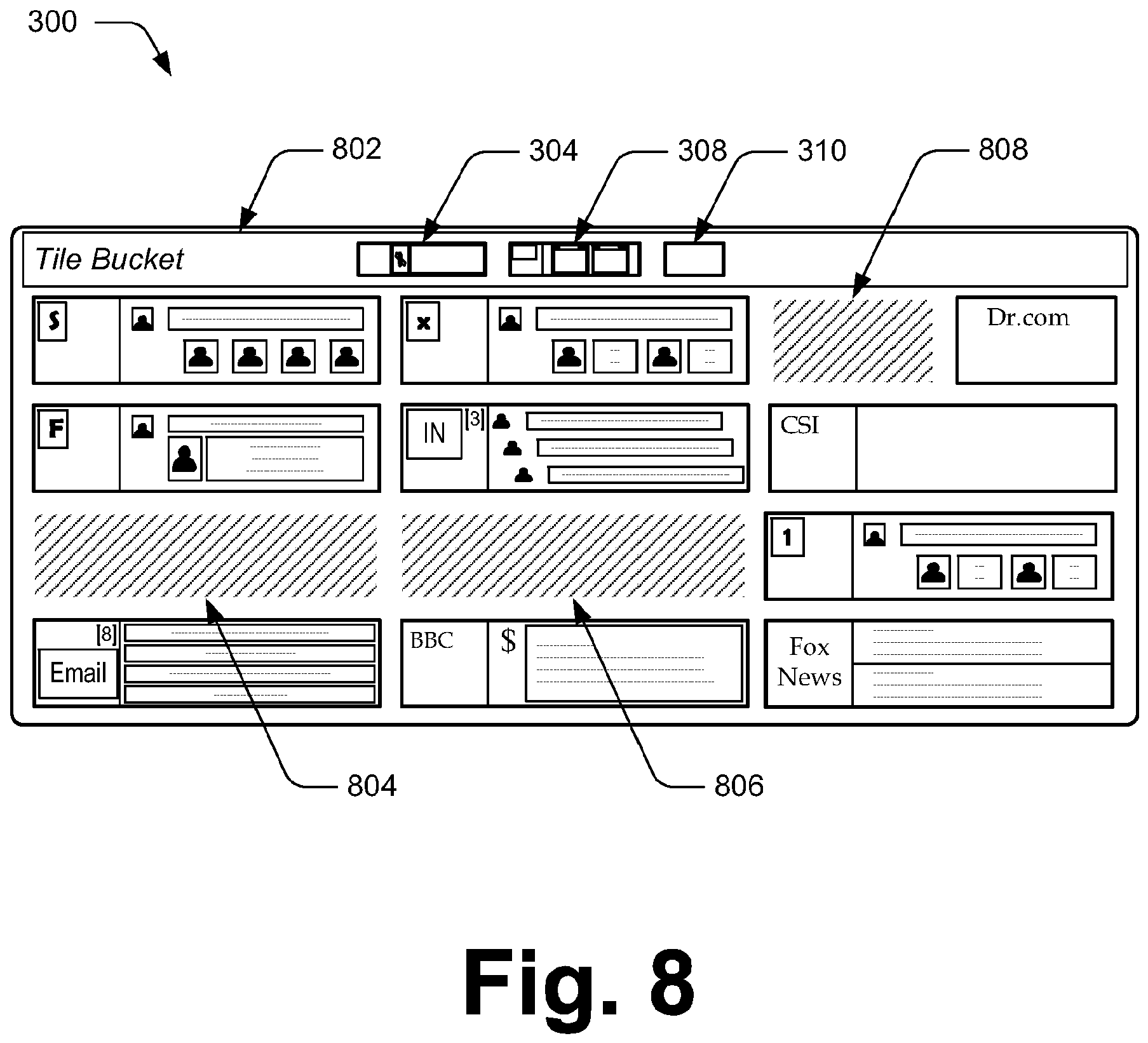 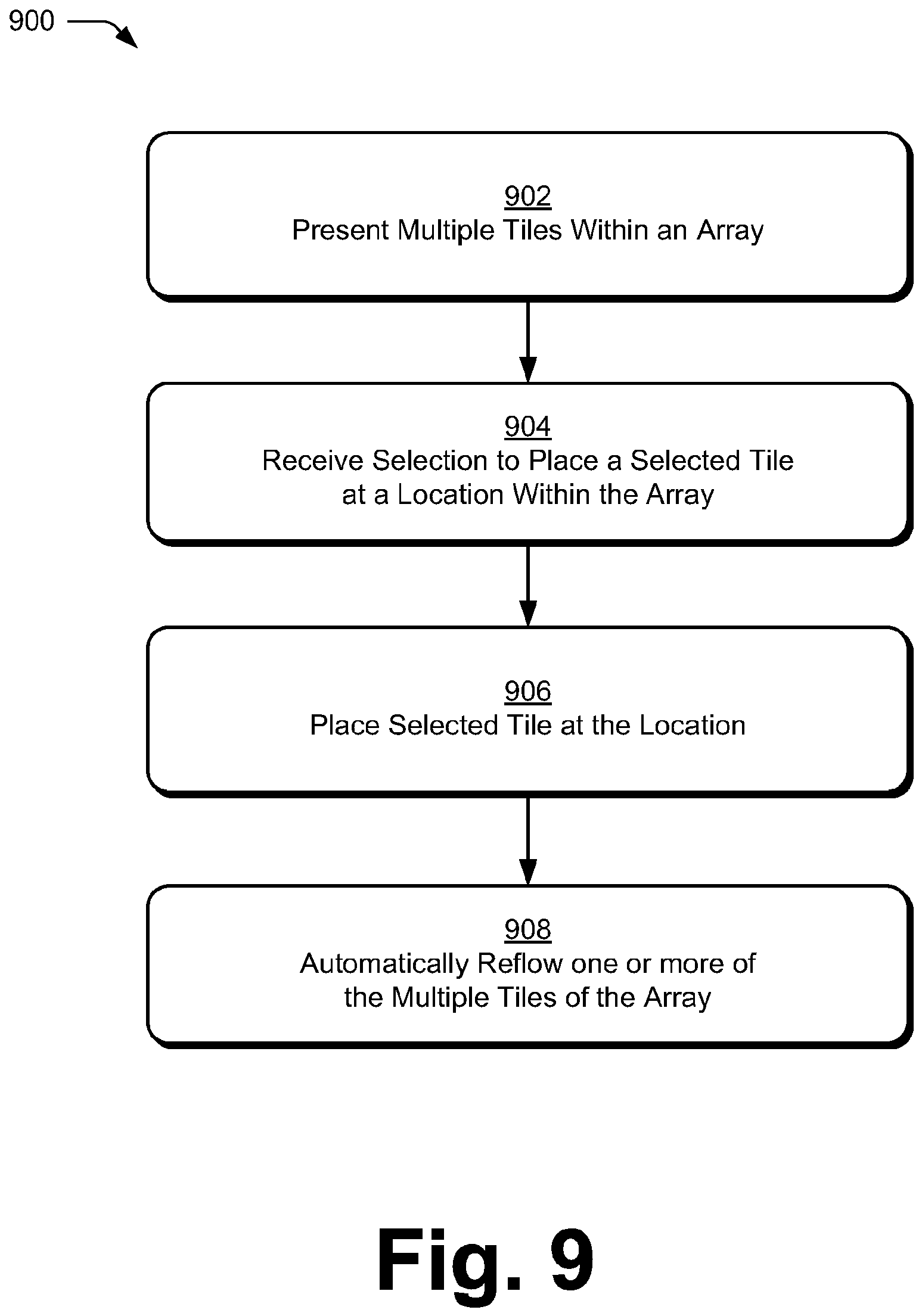 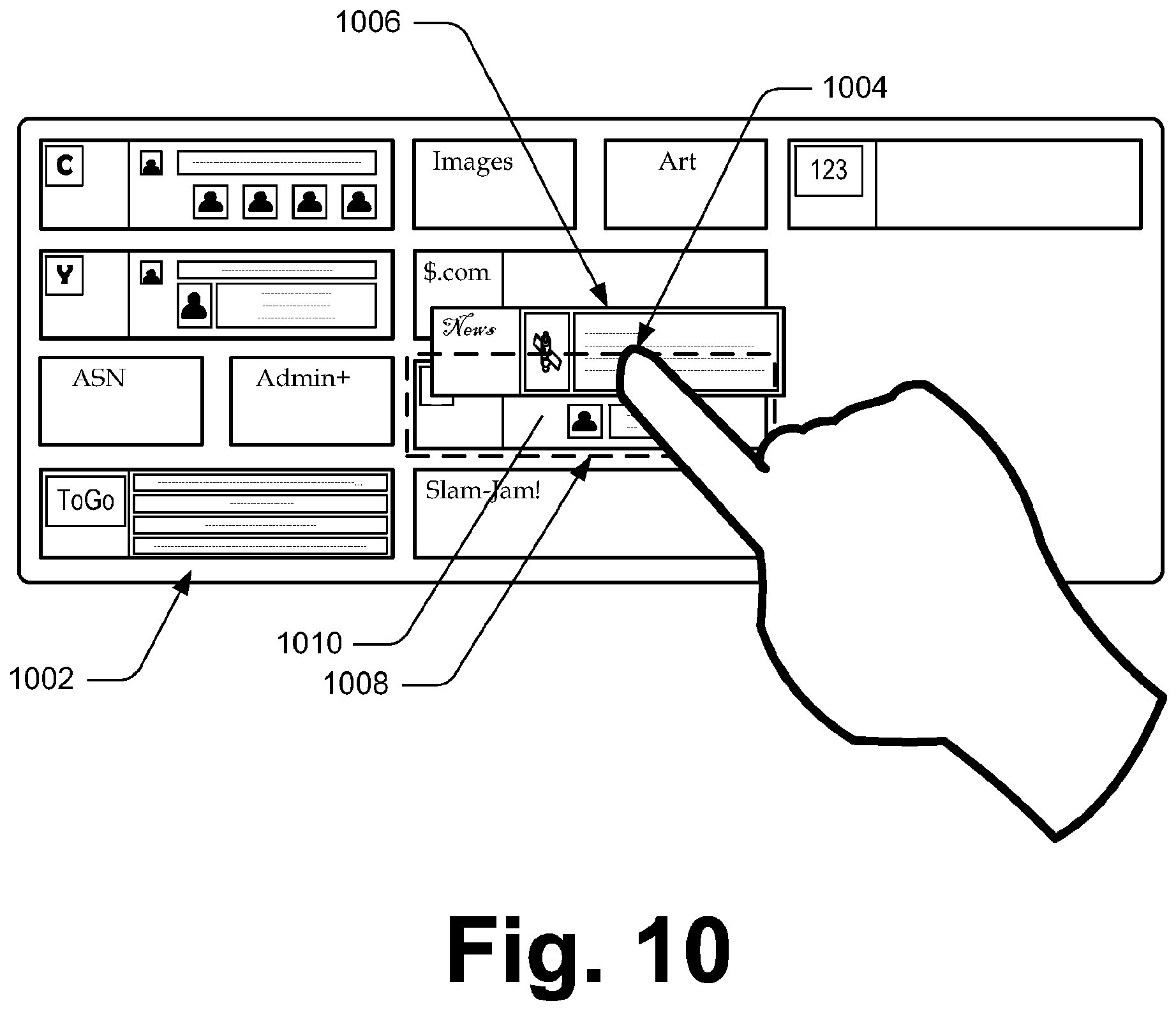 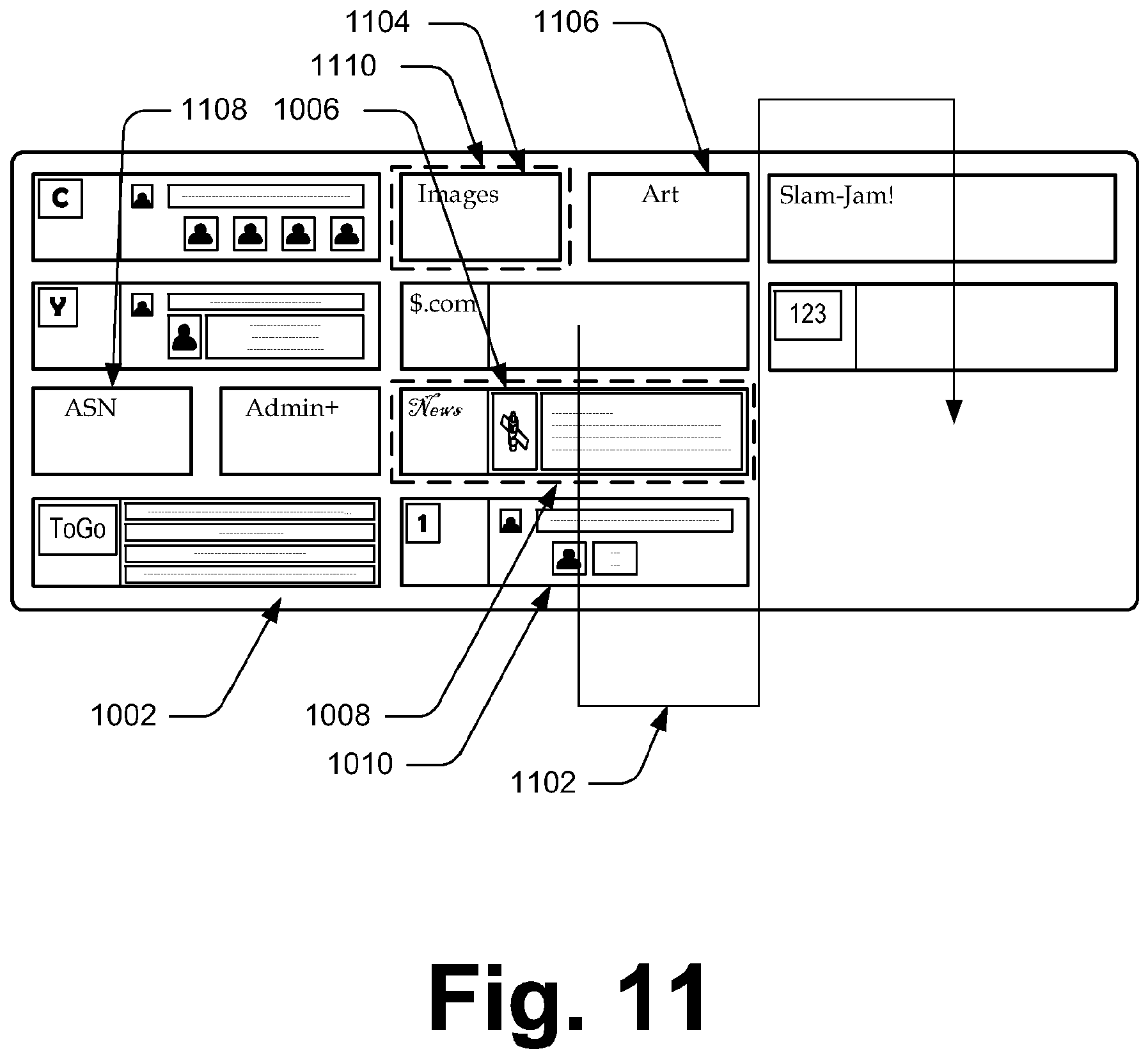 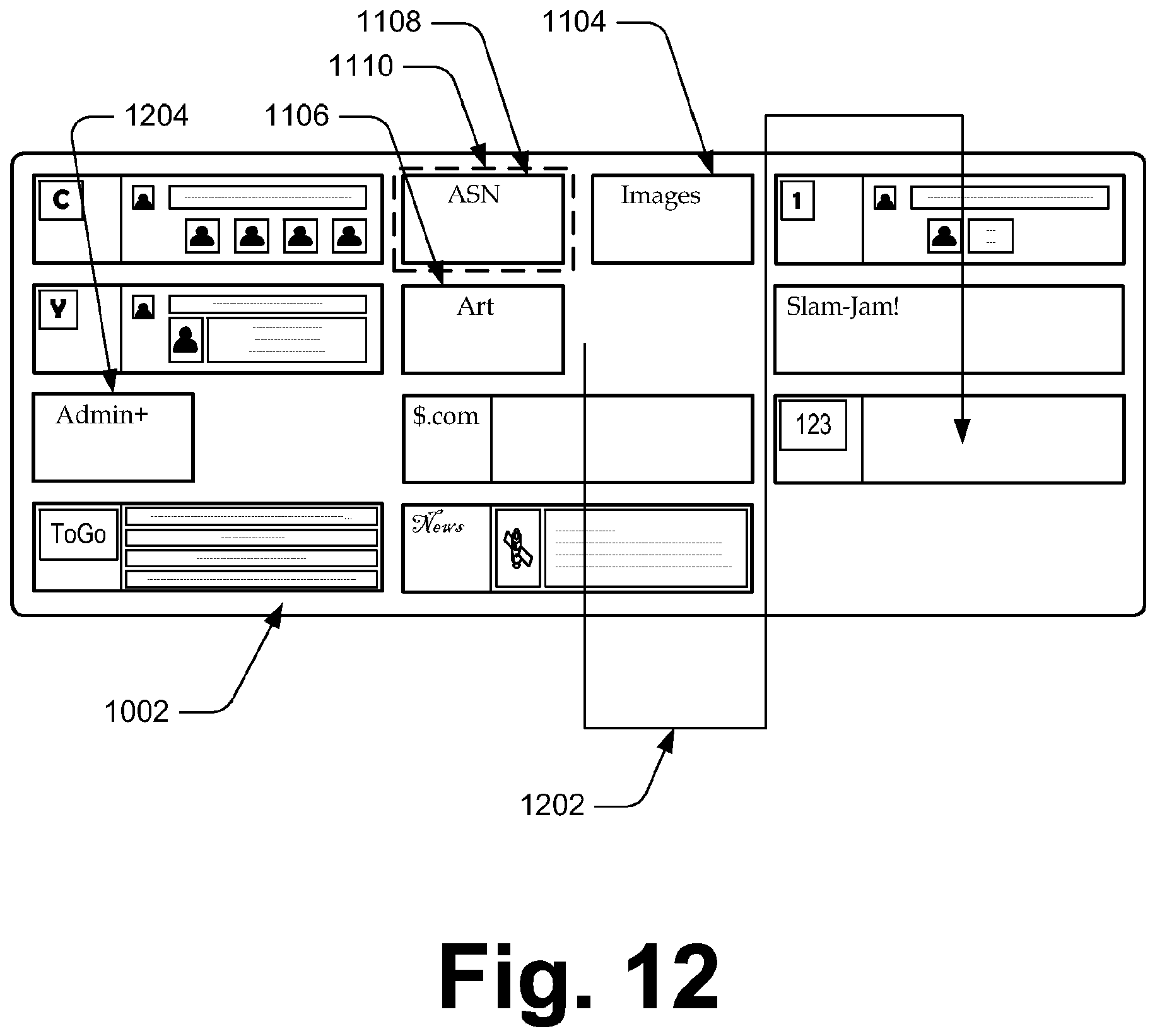