[0001] This application claims priority to United States Patent Application Serial No. 61/532,859, filed September 9, 2011.
[0002] The present invention relates generally to antioxidant formulations for pet food containing lipid-soluble tea catechins and tocopherol.
[0003] Antioxidants are applied at several stages of the pet food kibble manufacturing process before, during, and after extrusion. One common antioxidant comprises mixed tocopherols and/or tocotrienols. In one particular example, Naturox® Plus Dry (Kemin Industries, Inc., Des Moines, Iowa) is a dry antioxidant (DA) mixture which is added to the kibble dry recipe before it is extruded, while Naturox® Premium Liquid (Kemin Industries, Inc., Des Moines, Iowa) is a liquid antioxidant (LA) formulation in oil added to the enrobing fat on the kibble's surface. Since LA is applied closest to the air/kibble interface, it is crucial to the oxidative stability of the kibble. The LA formulation may also be applied to the meat meal during its production in the rendering process or directly after the rendering when the meal is isolated from the offal, to control oxidation of protein and fat prior to be used in the dry meal.
[0004] Green and black teas, as well as other varieties of tea, are well known to have water soluble antioxidants which perform well in a hydrophilic food matrix. Previous attempts at suspending these water soluble antioxidants in oil with AAFCO (Association of American Feed Control Officials) approved ingredients at concentrations needed for use in antioxidant formulations have been unsuccessful.

[0005] Recently, lipid soluble catechins (LSC) were identified to have antioxidant properties and maintain solubility in hydrophobic media, including vegetable oils. Oxidative Stability Index (OSI) results of LSC in animal and vegetable fat were promising and, as a result, the material was used in this sequence of trials. These materials, in conjunction with rosemary extract, natural surfactants (lecithin) and chelators (citric acid), were paired in formulas with the goal of creating a more versatile and equal, if not improved, formula with better efficacy.
[0006] New dry antioxidant formulations were developed to include not only fat soluble antioxidants, chelators, surfactants, but water soluble antioxidant extracts from spearmint and rosemary, which provided for an improved level of efficacy, especially at accelerated temperature storage conditions. As part of the antioxidant dry formulations, the chelators were varied and included organic acids, inorganic phosphate, milk whey protein and polyphosphate chelators with a targeted range in pH from 1.5 to 12. Surfactants for the dry formulations included lecithin, but also may include other ionic or non-ionic surfactants that are naturally derived or from non-natural sources, to either solubilize, act as a synergist and enhancing the antioxidant properties, or to further distribute the antioxidant into the desired host matrix.
[0007] For all formulations mixed tocopherols includes a single iso-form or a mixture of all structural isomers (alpha, beta, gamma, etc.) of tocopherols and/or tocotrienols.
[0008] The present invention provides an antioxidant composition for use in enhancing the stability of animal feed and constituents of animal feed comprising a tocopherol and lipid soluble tea catechins.

Fig. 1 is a chart of peroxide values (meq/kg diet) of kibbles treated with 1000 ppm of 8 different liquid antioxidant formulations stored at 65 °C

Fig. 2 is a comparison between OSI and PV (time to rancidity) results in sunflower oil treated with antioxidants

[0017] The chicken fat was treated with 3000 ppm of the liquid antioxidant formulas prior application to the kibble at 4.5%. Palatant was also applied to the kibble at 1%. Finished kibble was stored at 47 °C in individual plastic bags and analyzed for peroxide values (PV) using the FOX II Method (Gülgün Yildiz, Randy L. Wehling and Susan L. Cuppett. Comparison of four analytical methods for the determination of peroxide value in oxidized soybean oils. Journal of the American Oil Chemists' Society Volume 80, Number 2, 2003, 103-107; Nourooz-Zadeh, Jaffar; Tahaddine-Sarmadi, Javad; Birlouez-Aragon, Ines; and Wolff, Simon P. Measurement of Hydroperoxides in Edible Oils Using the Ferrous Oxidation in Xylenol Orange Assay. J. Agric Food Chem, Bol 43. No. 1. 1995, 17-21) every 2 weeks. Formation of hexanal and 2,4-decadienal was measured at week 4 by gas chromatography (Frankel, EN. Methods to determine extent of oxidation. In: Lipid Oxidation. The Oily Press: Dundee, Scotland. Copyright 1998). The results are presented in Table 2.
Table 2. Peroxide values and aldehydes (sum of hexanal and 2,4-decadienal) levels of the kibble stored at 47 °C for 4 weeks.

[0018] After 4 weeks of storing the kibble at 47 °C the study was terminated as the peroxide values for all of the treatments reached 1 mEq/kg, which is considered an indication of rancidity. As expected, lack of antioxidants (LA1) resulted in highest peroxide value as well as level of aldehydes. More importantly, formulas containing LSC outperformed tocopherol-based antioxidant, as apparent from the peroxides values (1.4, 1.3 for LA3, LA4 vs. 2.1 for LA2) and aldehydes content (48, 43 for LA3, LA4 vs. 69 for LA2).

[0020] The kibbles were coated with untreated chicken fat at 4.5% and palatant at 1%, and placed in storage at 25 °C, 37 °C and 47 °C. Samples were analyzed for peroxide values (PV) using the FOX II Method and secondary lipid oxidation products (hexanal and 2,4 decadienal) by gas chromatography. Results are shown in Table 4.
Table 4. Peroxide values and aldehydes (sum of hexanal and 2,4-decadienal) levels of the kibble stored at ambient temperature, 37 °C and 47 °C.

[0021] The inclusion of dry antioxidant into the kibble results in higher oxidative stability as evident from lower peroxide values and aldehyde levels under the storage conditions. Antioxidant formulas containing LSC and spearmint extract performed substantially better than the tocopherol-based formula, especially at higher temperatures. Interestingly, the LSC and WSGT containing formulations demonstrated vast differences in performance, showing that the water-soluble green tea extract did not control oxidation in the pet food matrix tested.

[0022] The effectiveness of LSC extract in combination with tocopherols, rosemary extract, and lecithin was tested using an animal fat as a matrix. Formulations listed in Table 5 were applied to the fat at 1000 ppm and 3000 ppm levels.
Table 5. Composition of formulas

[0024] OSI results show that the antioxidant activity of the formulas increased with higher LSC content. Samples containing 5% LSC applied to the fat at 3000 ppm had the highest induction period among tested formulations.

[0025] Fat samples were treated with 1000 and 3000 ppm of experimental antioxidant formulas having varying ratios of tocopherols, rosemary extract, lipid soluble tea catechins (LSC) and lecithin, as shown in Table 7, and tested in duplicate in the OSI at 100 ºC (Table 8).
Table 7. LA Prototypes tested in the LSC storage study.
Table 8. OSI results of LSC formulas in chicken fat.

[0026] Additionally, 9 g treated poultry fat was weighed into an OSI tube, stored in an OSI unit at 65 °C and connected to air flow tubing. The progress of oxidation was measured by analyzing the rise in peroxide values over time (Figure 1).
[0027] The performance of the liquid formulations containing LSC was equivalent or improved when tested in the OSI at 65 °C. Formula LSC-3 out-performed all other formulas at 65 °C, and was statistically equivalent in the OSI to the current Naturox® Premium Liquid.

[0028] Experiments were conducted to study the effect of combination of antioxidants on the time to rancidity of sunflower oil. Sunflower oil was treated with tocopherol at 1200 ppm alone and combined with WSGT (350 ppm), rosemary extract (250 ppm) and LSC (350 ppm) and placed in an incubator at 40 ºC. Samples of the sunflower oil were periodically analyzed for peroxide values (PV) using the FOX II Method. Time to rancidity (PV≥10 meq/kg oil) was determined for all of the treatments. Results show the increase in stability of sunflower oil treated with combinations of antioxidants (Table 9) in contrast to the treatment with tocopherols alone.
Table 9. Synergistic Effect of Antioxidant Combinations on Time to Rancidity

[0030] According to the American Oil Chemist Society, the Oil Stability Index (OSI) is the point of maximum change in an oil of fat's oxidation under standard conditions. Accordingly, the OSI determines the relative resistance of an oil or fat to oxidation and is an indicator of the length of shelf life for that fat or oil. Experiments were done to evaluate the effect of lipid soluble catechins on the OSI of sunflower oil and on the shelf life of sunflower oil.
[0031] Sunflower oil was treated with four different antioxidants: tocopherol at 1200 ppm (total tocopherol concentration); rosemary at 250 ppm (Rosan™ SF 35 from Kemin Industries, Inc., a rosemary extract standardized to 10% carnosic acid); water soluble green tea extract at 35 ppm (standardized to 45% EGCG and 45% other catechins); lipid soluble catechins at 35 ppm (standardized to 74% catechins). Untreated sunflower oil was used at the control. A shelf life study of the same samples at ambient temperature was also conducted. Shelf life time to rancidity was defined as the number of days before the peroxide value (PV) exceeded 10 meq/kg. The results are set out in Table 10.
Table 10. Time to Rancidity of Sunflower Oil

[0034] From Table 11 it is seen that the lipid soluble catechins when used alone did not perform as well as the other antioxidants and indeed did not perform as well as leaving the fat untreated. WSGT was one of the better performing antioxidants, which again matched with the observations from the OSI testing. However, when used in combination with tocopherol (Tables 9 and 12), the lipid soluble catechins provided a synergistic protective effect, enabling a reduction in tocopherol to approximately one-fifth of the prior inclusion level without significantly increasing either the peroxide or 1,4-decadienal values. A key goal of the pet food industry has been to reduce the use of tocopherols in the formulations. It has previously been difficult to reduce tocopherol concentrations due to difficulty finding synergistic antioxidants that are effective in a combination that matches the stabilization capability of tocopherols on products under real world storage conditions. In this work we've been able to reduce tocopherol levels up to 80% and still provide similar or better shelf life on a finished pet food diet. This work has shown synergism between tocopherols and LSC in combination or in addition to other antioxidants.
[0035] The foregoing description and drawings comprise illustrative embodiments of the present inventions. 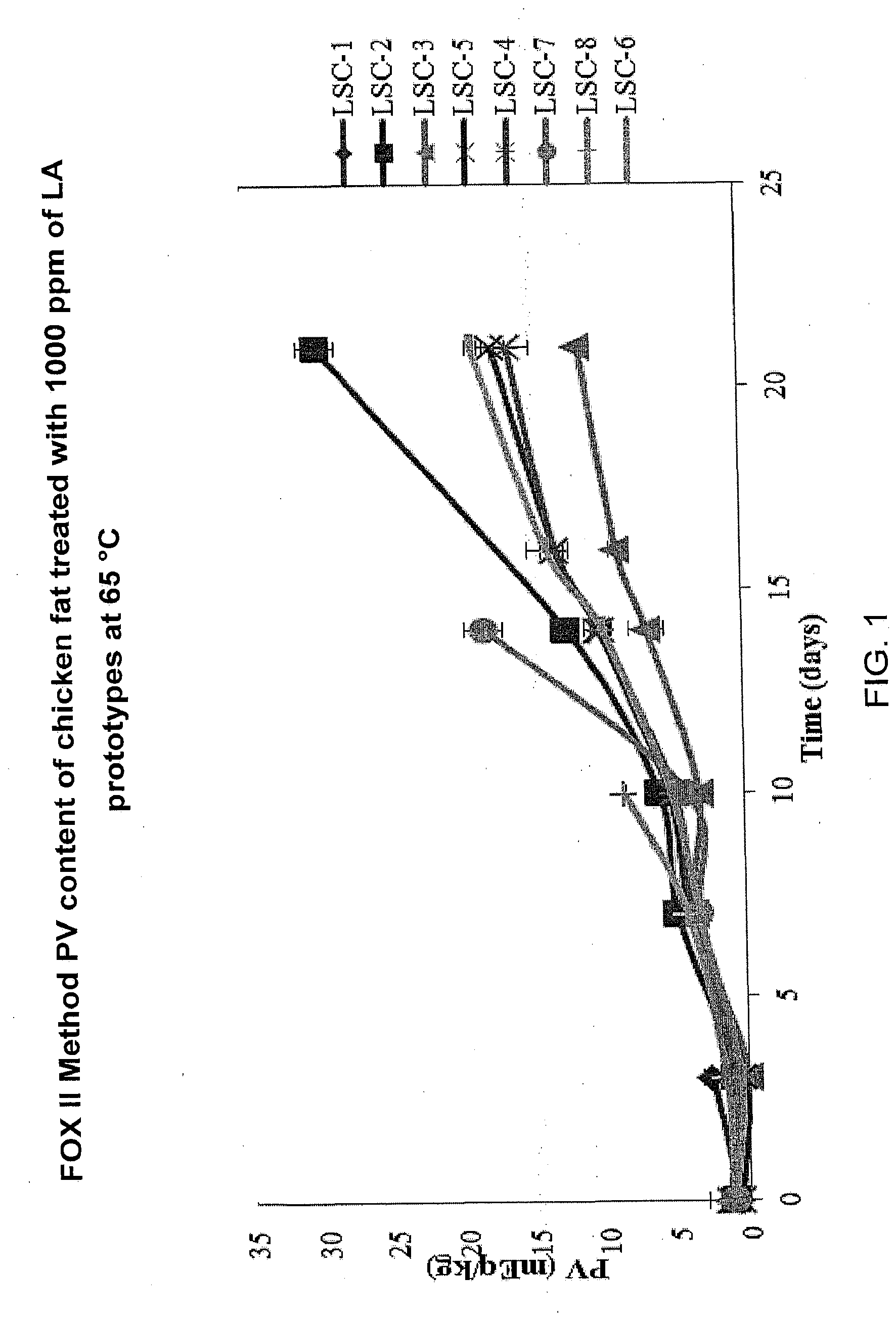 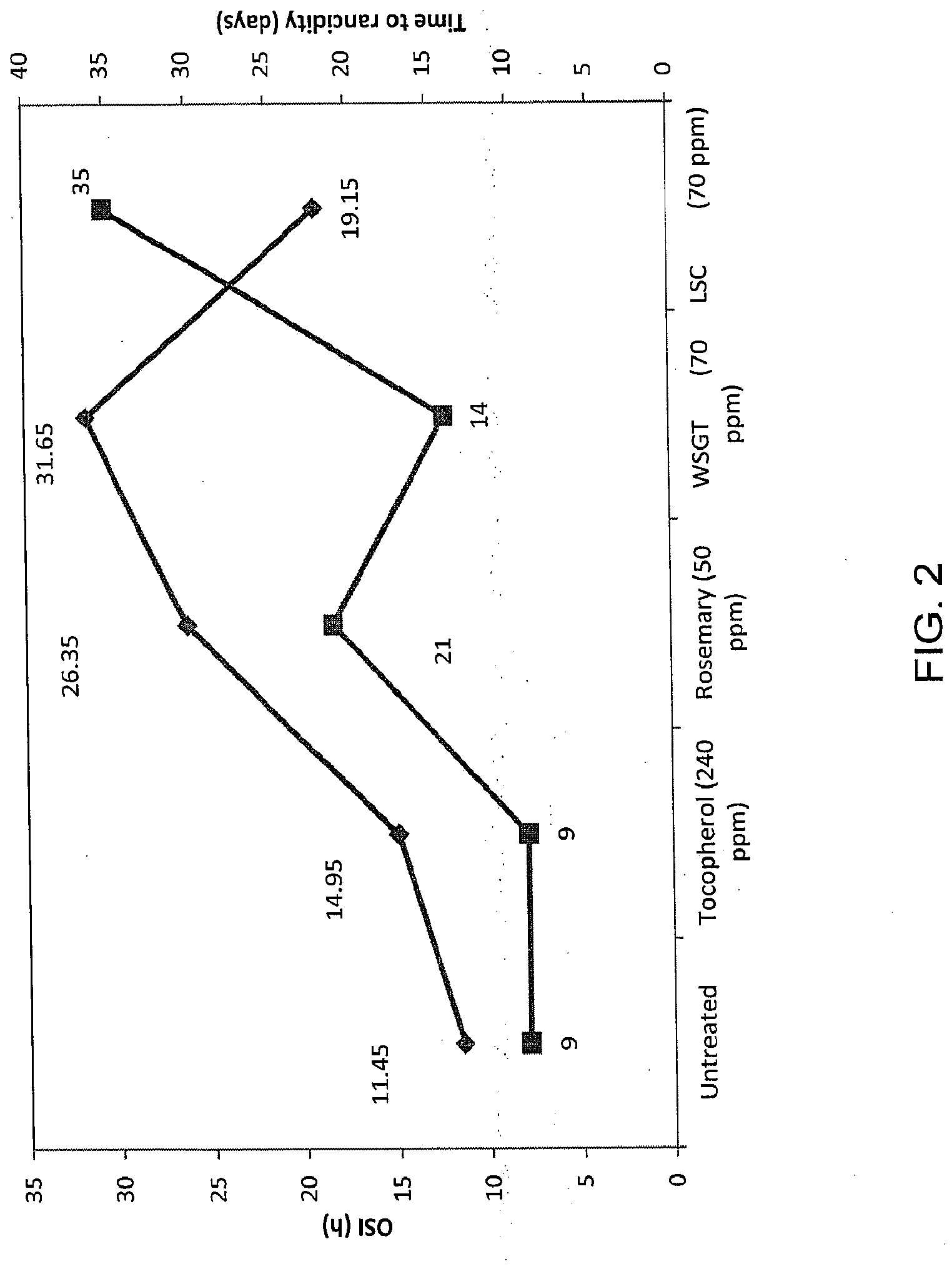