Figures 1a and 1b show schematic representations of a system;

Figure 2 shows a side view shows plan (a), side (b) and rear (c) views of a radiofrequency electrode;

Figure 4 shows front (a), side (b) and plan (c) views of another vacuum chamber;

Figures 6A and 6B are photographs of a comparative test.

[0134] An experiment was run to coat a substrate using the parameters of Table 1.
Table 1: Process parameters according to a first example

[0135] A further experiment was run to coat a substrate using the parameters of Table 2.
Table 2: Process parameters according to a second example

[0136] The water contact angle is used to measure the hydrophobicity or wettability from a surface.
[0137] The oleophobicity level is measured according ISO 14419-2010.
Table 3: Oil and water repellence test data

[0138] It is clear from Table 3 that the hydrophobicity, as measured by the contact angle, is higher in the cases of Examples 1 and 2 than for the prior art precursor. It is further established that the coatings of Examples 1 and 2 have a higher oleophobicity than the prior art coating. It is also noteworthy that the process time, power and flow rate were all lower in developing the coatings of Examples 1 and 2 than in the prior art case.
[0139] Table 3 also demonstrates that coatings formed from precursors having perfluorocarbon backbones comprising eight carbons, such as 1H,1H,2H,2H-Perfluorodecyl acrylate, have higher oleophobicity and hydrophobicity than coatings formed from precursors having perfluorocarbon backbones comprising six carbon atoms, such as 1H,1H,2H,2H-Perfluorooctyl methacrylate.
[0140] Surprisingly, however, the Applicant has found that optimum coatings are deposited when the mode (i.e. continuous wave or pulsed) is selected according to the following key (Table 4). 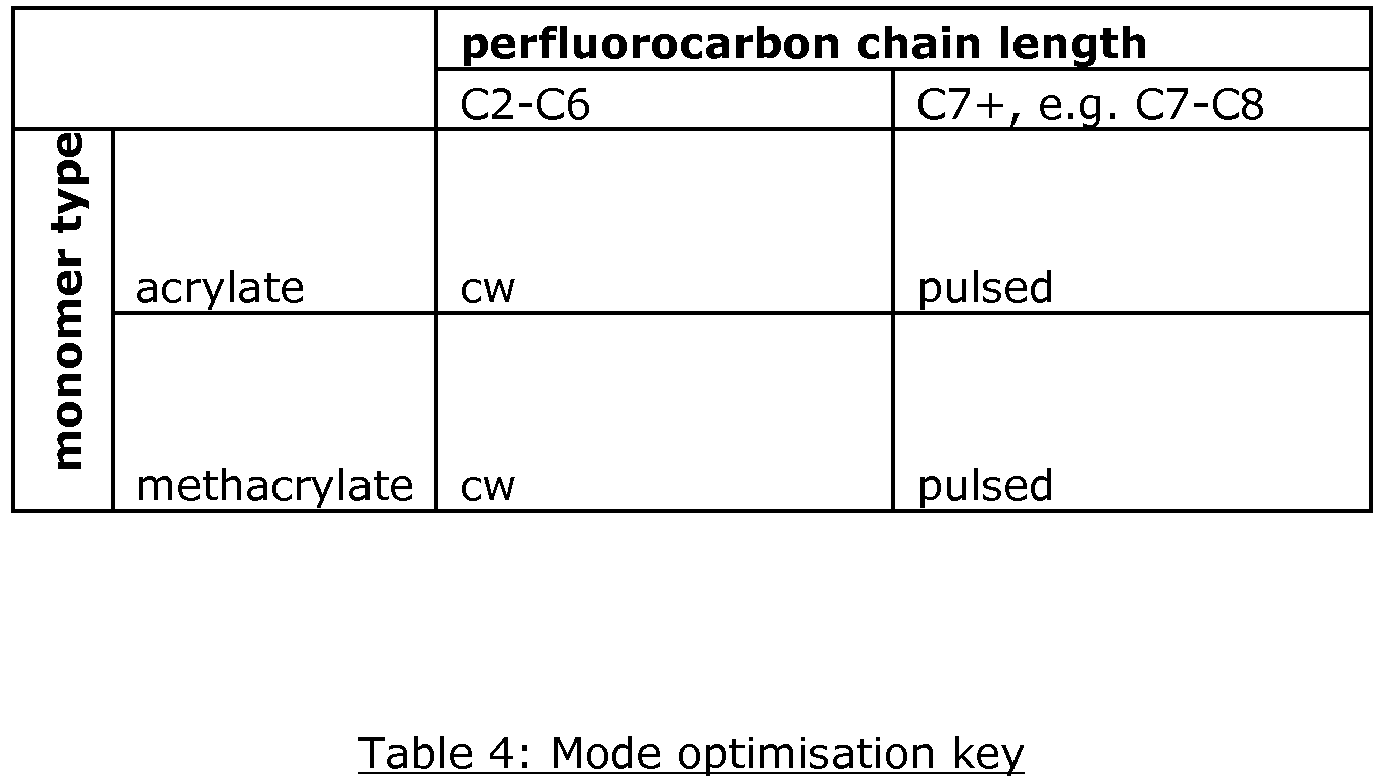 [0141] To demonstrate the deposition rate of different coatings, the coating thickness was measured with ellipsometry after a certain treatment time on coated glass plates. The results are shown in Table 5 below.
Table 5: Deposition rate test data

[0142] The process time is approximately seven times higher for C3F6 than for the coatings of Examples 1 and 2.

3. Uniformity of coating for single and plural electrodes

[0143] A conventional electrode set up was established with a single electrode per electrode set. In such conventional configurations the top side of the substrate or the side facing towards the RF has a thicker coating formed thereon than the obverse face or face pointing to the ground electrode.
Table 6: Uniformity test data

[0144] As can be seen in the above Table 6, the data demonstrates that the electrode configuration of the invention leads to markedly more consistent coverage on both surfaces of the substrate.

4. Coating uniformity according to the precursor [0149] To test the corrosion resistance, a single gas verification test was used that had been developed as a quick and effective method of evaluating gold and nickel coatings on copper.
[0150] The result shows that after 24 hours the ENIG-reference PCB was showing sufficient corrosion to make it unusable whereas the coatings of Examples 1 and 2 above showed no signs of corrosion. After a further four days, the ENIG reference sample was heavily corroded with large areas of copper oxide and nickel showing through. By contrast, the coatings of Examples 1 and 2 above showed no corrosion at all or just some tiny spots. In this experiment different precursor types, different coating thickness as well as different power modes (continuous or pulsed) showed the same excellent results.
[0151] Reference is made to Figure 6 which shows the ENIG reference (Figure 6A) and plasma coating of Examples 1 and 2 (Figure 6B) after the test.

[0152] The wettability of the Example 1 plasma coated PCB was shown according to following method IPC JSTD-003B.
[0153] The test coupons were dipped in solder paste: SnPb at 235°C or SAC305 at 255°C. Test fluxes 1 and 2 were used for SnPb and SAC305 respectfully. Samples were used as a baseline tested at 90 degrees incident to the solder pot. The immersion depth was 0,5mm and the dwell time in the solder pot was 10 seconds. A series of samples were additionally exposed to 8h of 25 72°C/85% R.H. in a humidity chamber.
[0154] All of the test coupons showed good wetting and robustness of the coating. It has been demonstrated that the use of reactive monomers is effective in providing improved coatings. Moreover, the use of low powers and fast process times provides homogeneous coatings with excellent performance characteristics. The invention is defined by the claims. 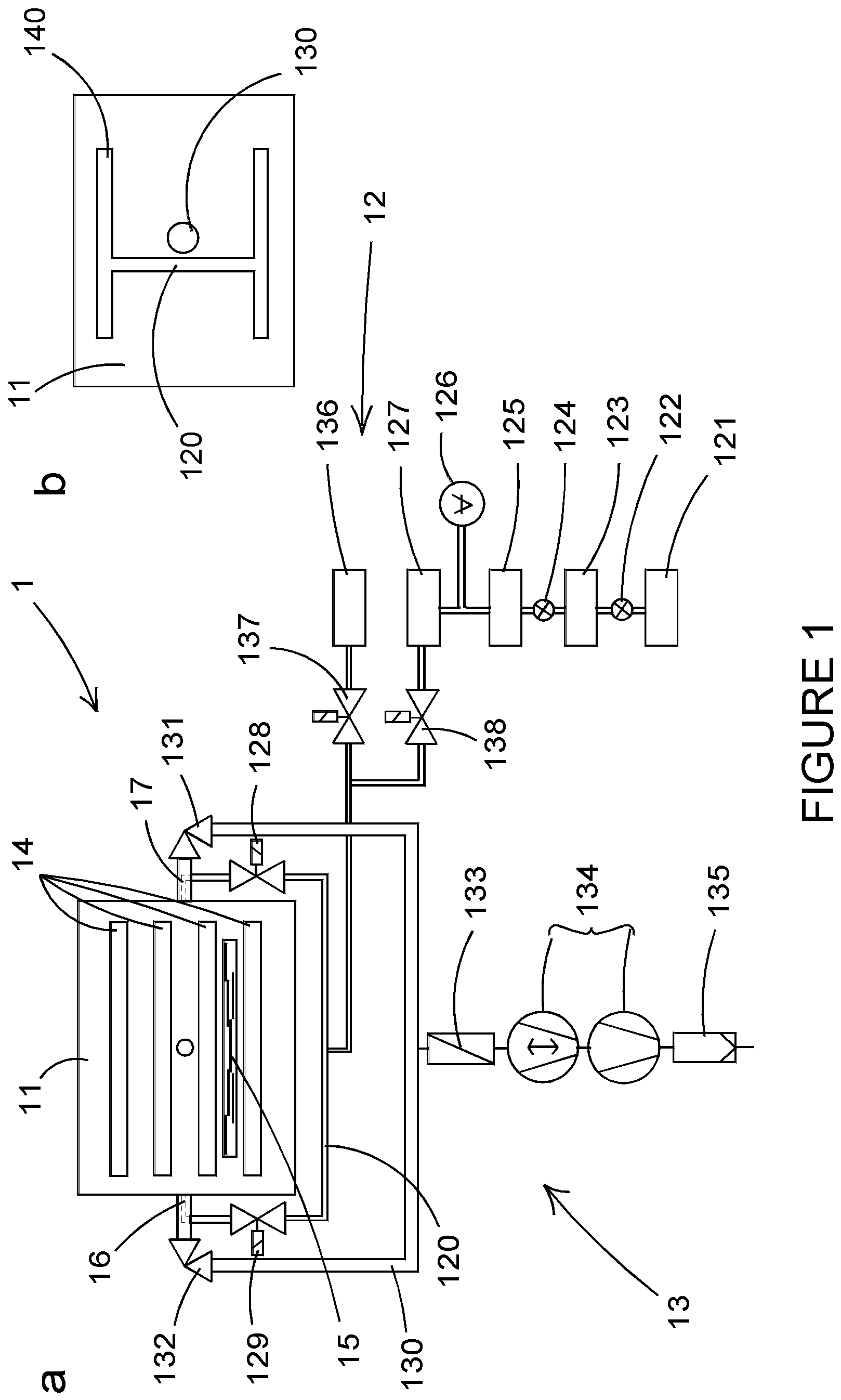