[0001] The object of this invention is a method to arrange cooling air / combustion air for a motor in warm inside space, like for a combustion engine or electric motor. With the help of this method, a sufficient amount of combustion air / cooling air is conducted for its need for an engine that is located indoors.
[0002] The usage places for the invention are vehicles that are equipped with a combustion engine and other engines and electric motors indoors, like in garages, storage spaces for vehicles, engine halls, power stations etc. Very useful objects for the invention are the lorries, busses, trailer truck prime movers and different power tools like for instance wheel loaders, fork lift trucks etc. The large electric motors are also advantageous places to use the invention. The more combustion air or cooling air is needed the more useful it is for the use of the invention. Especially, the cold start of the before mentioned engines is a situation where the method according to the invention gives great advantage. When the engine is considerably cooler than the ordinary usage temperature (room temperature) its running speed is greater than the idle running. The starting of more than one of this kind of engines at the same time for instance in the morning is a very useful situation to use the invention. The usage of the invention is the more useful the greater the difference between the inside and outdoor temperature is.
[0003] The electric motors are useful places to use the invention because they need cooling air during their run.
[0004] The combustion engines in the situations and places that have been mentioned before are started and operated nowadays so that the engine takes the combustion air directly from the warm room space. When an engine is started its air intake system sucks the room air near it to be used in the engine and then the substitute air to this space comes through all the possible gaps and openings. The open doors between the rooms and the gaps in the closed doors work as the flow routes for the air and thus heated indoor air comes even from a long distance inside the same building.
[0005] As we know that an ordinary lorry / truck prime mover turbocharged engine uses after its cold start during the greater than ordinary idle run air about 20 - 40 m3/min, so three this kind of engines use during 5 minutes about 300 - 600 m3 air. In practise, in this kind of situation air comes also through the gaps in the exterior walls but the greatest part of this kind of air is heated indoor air. If the situation that has been described is formed indoors with the dimension of about 10 m x 10 m x 4 m, the amount of the air that flows to the engines during that 5 minutes is even 1.5 times that whole volume.
[0006] Large electric motors require great amounts of air for cooling during their run. In the known technique, this air is taken from room air.
[0007] The before mentioned known technique is used commonly also in the air intake for combustion and cooling of the turbocharged engines of big volume (11 - 18 litres) and for cooling of electric motors.
[0008] When using the known technique major disadvantages occur. In the case of the combustion engines the greatest drawback can be seen to be the great energy usage they cause. In the northern countries, like for example Finland, a great part of the year it is so cold that the buildings need to be heated. As the heated room inside air and in many cased the neighbour room heated air flows to the combustion engines so that the substitute air during the cold periods of the year is cold outdoor air. The lost warmth energy means quite big costs because the rooms must be reheated.
[0009] Another clear drawback in the use of the known technique is that it causes air draught between the rooms. This drawback is encountered both in the case of the combustion engines and the electric motors. For instance there is a draught in the neighbouring of-fice room. The draught weakens the comfort of the room and is also in many cases a health hazard. It is also a quite clear drawback that the office temperature goes down. If this kind of situation occurs repeatedly for instance every workday morning the situation can be very hard to tolerate and unhealthy for the people who work there.
[0010] The intension of this invention is to obtain a method to arrange such a combustion air / cooling air for the warm inside room located engine or motor that the drawbacks of the known technique can be avoided. It is characterizing for the solution according to the invention what has been stated in the characterizing part of the claims.
[0011] In the same way, as the known technique has drawbacks and hindrances the usage of the method of the invention has many advantages. The greatest advantage in comparison to the known technique is the saving of the energy. Once heated room temperature can be kept warm with a normal warming power and there is no need for another raise in the temperature of the room by directing heating to the cold substitute air. From the earlier stated example concerning combustion engines it can be derived that the amount of saved energy in that case is what is needed to heat about 400 m3 of air to the desired room temperature. The amount of the raise of the temperature and thus the loss of energy depends on the outdoor temperature.
[0012] The invention is described in more detail in the enclosed drawings where

fig 1, presents a typical known technique method diagrammatically taking the combustion air for a lorry engine that is indoors,

fig 2, is a diagrammatic presentation of using the method according to the invention in the before mentioned situation. 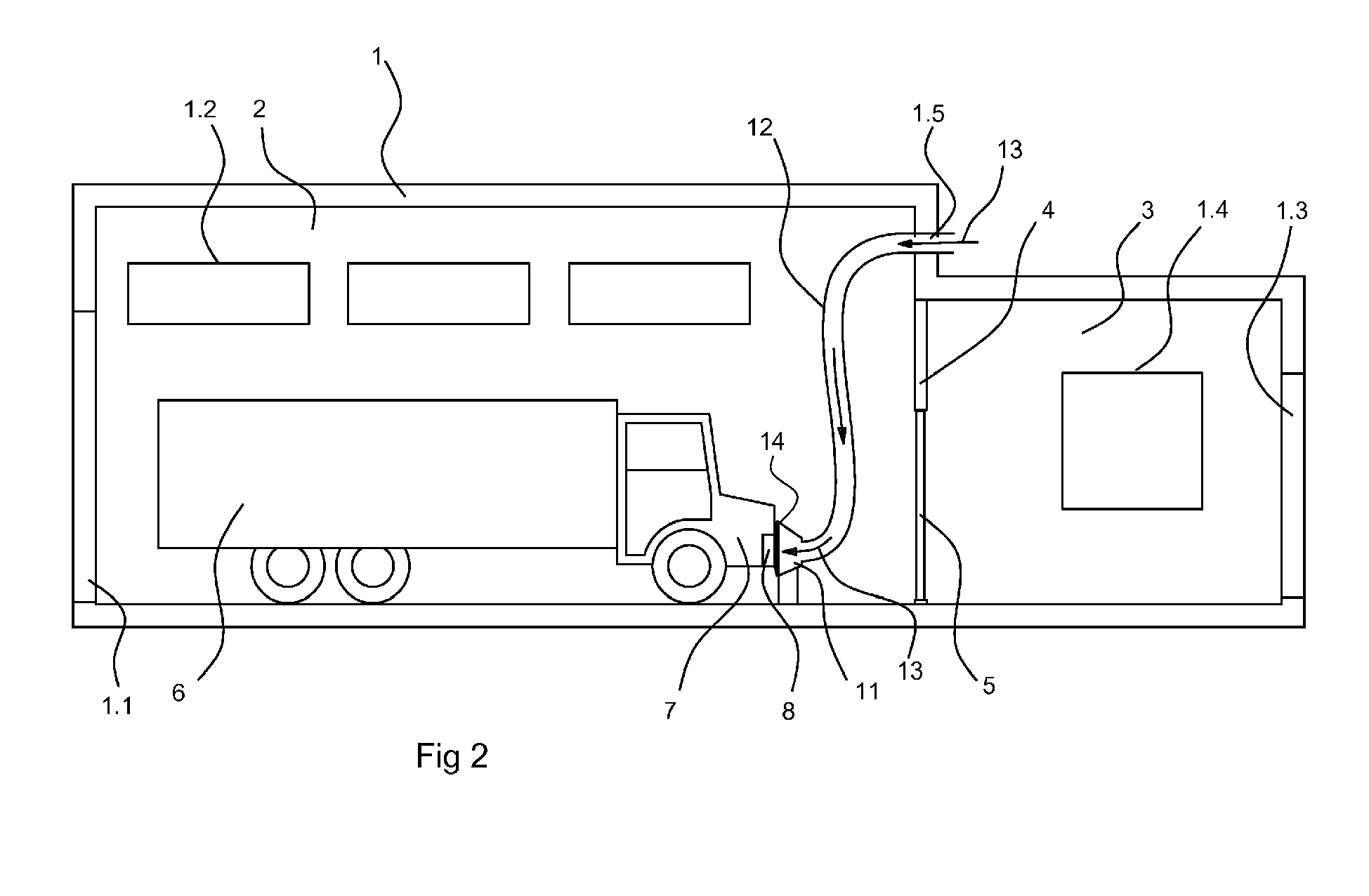