[0001] The invention is related to a method and of system capable of providing multimedia information to a user at reduced battery consumption.

[0051] An initialization process has been briefly introduced in the beginning and is shown in Figure 1. Running this process on application processing units, usually requires clock-rates of over 1 GHz. Therefore, today, only short time usage of object detection applications on mobile devices is possible, since the battery is emptied, quickly.
[0052] According to preferred embodiments, it is possible to classify objects (visual search process), which is the process of matching a current image with a previously generated class description, or to match individual features (feature matching process), which can then be used, ideally by the application processing unit to run a pose optimization process. Keep in mind that visual search may be based on matching several features per image. At the same time, the whole image might be a feature. Both approaches are supported by the invention.
[0053] According to the invention, both the visual search process and the feature matching process can work with different features and feature descriptors present in the database and present in the current image. In that case, the different features are extracted using different feature extraction and/or feature description methods and matched in two independent runs by the hardware unit (as indicated in Figure 3). For example, first SIFT features are extracted and matched, then SURF features are extracted and matched.
[0054] Figure 3 describes a process of feature matching similarly as described above with reference to Figure 1 and an application of the matching for pose estimation, rendering 3D objects or playing an audio file. The rendering may take place on a graphic processor unit (GPU).
[0055] One advantage of the invention is the possibility to leave out processing steps, which were necessary before or to run them in a completely different advantageous configuration. For example, the feature extraction process can be neglected or left out, creating a very high number of descriptors. Instead, every pixel or a very high number of randomly selected pixels may be chosen as the descriptor center. In this case, each pixel or each of the selected pixels is to be seen as a feature in terms of the present invention. Instead of choosing random pixels, a grid can be used to extract the descriptor centers, for example, every 10th pixel of a line, where every 10th pixel row is analyzed. The massive increase in features to match (ca. 10.000 features per image) resulted in an increase of successful initializations by 76% on a test-database of several thousand images.
[0056] Advantageously, it may be tested during the process whether a feature pair can theoretically fit or not. This may be achieved by checking the current feature's estimated position against the reference feature's recorded position. According to this aspect of the present invention, it is proposed to narrow the search space or influence the distance measure for matching image features of a current image taken by a capturing device by considering the (partial) knowledge of their position in world coordinates (or global coordinates). A global coordinate system may be an earth coordinate system or an object coordinate system (e.g. a building or a product package or a car), which has a fixed altitude or a fixed orientation related to earth's gravity. As the degrees of freedom of a feature's position that can be determined are heavily depending on the available information on the position and orientation of the capturing device, different exemplary implementations of aspects of the present invention are explained below with respect to Figures 4 and 10 in more detail.
[0057] It is another aspect of the invention to take indicators of the feature extraction process into account, like the sign resulting from SURF feature extractor (positive or negative Laplacian of Gaussian).
[0058] Another aspect of the invention not only takes into account the minimum distance between two feature descriptors, but also the distance between the minimum distance and the second best distance. Particularly, two descriptors are considered as a match, if the second best distance multiplied with a scalar factor smaller than 0,9 is bigger than the best match's distance. This avoids the occurrence of false positives (wrongly matched features), which will lead to wrong classifications or problems in the pose estimation.
[0059] In another aspect of the invention, all current feature of the current image are matched against each other, removing features, which are very similar to each other (the distance measure being below a certain threshold). The filtered set of current features is then matched against reference features.
[0060] The invention is well suited for object classification. The invention is also well suited for camera pose initialization, where no or incomplete prior knowledge about the object's pose in relation to the camera is available.

[0061] A feature is a salient element in an image which can be a point, a line, a curve, a connected region or any other set of pixels. Also, a pixel, all pixels of an image, or each of a set of selected pixels may be defined as a feature in terms of the present invention.
[0062] Feature detection algorithms are usually saliency detectors. For example, they find lines, edges, or local extrema of a differential operator. A feature detector can be seen as a function mapping a region of pixels to a response. In the literature, this region is referred to as sampling window or measurement aperture of the feature detector. The response is eventually thresholded to decide which elements are features and which are not. In order to extract features at a certain scale, either the sampling window can be scaled accordingly or the image is scaled before computing the response of the feature detector. The size of a feature is then defined as the size of the sampling window used to detect it.
[0063] Common examples for keypoint detection methods include Laplacian of Gaussian (LoG), Difference of Gaussians (DoG), Determinant of Hessian (DoH), Maximally stable extremal regions (MSER), Harris features, or learning-based corner detectors such as FAST.
[0064] 3D features also represent a possible data source for this invention. 3D features can be extracted from depth images or 3D models by many methods, for example identifying local extrema.
[0065] In one aspect of the invention, the whole image may also be seen as a feature.
In another aspect of the invention, the combination of 3D data and intensity data can be used as input data, as for example described in [19].

[0066] The visual features extracted (feature points, edges, corners, local extrema, etc.) need to be repeatable which means that their extraction should be possible despite different viewpoints (orientation, scale, etc.), light conditions and/or image noise.
[0067] The matching process consists of finding at least one corresponding visual feature which is extracted from two or more images. It often requires the creation of descriptors that allow that the same physical feature in different images is described in a similar way with respect to some similarity or distance measure. An overview and comparison of some feature point descriptors is given in [21]. Once one or multiple descriptors for every extracted feature are created, they are matched according to the similarity or distance measure: to every feature in the query image a match is assigned using nearest descriptor or based on the ratio test of [1].
[0068] [18] describes a descriptor that represent local image shape and its spatial layout, together with a spatial pyramid kernel.
[0069] [20] describes a descriptor based on the spatial relationship of features, which is also a possibility. The approach is to select n nearest neighbors of a point X in a set Pn. Select m<n points from Pm. Compute all possible invariants based on f points of m (f =5 for the cross ratio and f = 4 for the affine invariant). The sequence of the invariants in a fixed order is one descriptor of the point X. The affine invariant is the ratio between two triangle areas: A(a,c,d)/A(a,b,c). The perspective invariant is the cross ratio of triangle areas: (A(a,b,c)*A(a,d,e))/(A(a,b,d)*A(a,c,e)). In [20], a hashing process is used to match features, which could be left out, using our engine.
[0070] [15] gives a good overview on 3D and depth-image based descriptors for matching.
[0071] Overall for this invention, a descriptor can advantageously be a vector, which is derived from a 2D image or a part of a 2D image or 3D data, which is created by not just transforming pixels into a different color space or normalizing their values. In another aspect of the invention, descriptors are derived from histograms, statistics or relative relations on pixel, shape or depth values.

[20] Uchiyama, Hideaki, and Marchand, Eric. "Toward Augmenting Everything: Detecting and Tracking Geometrical Features on Planar Objects." 2011 International Symposium on Mixed and Augmented Reality (2011): 17-25.

3. The information system according to claim 1 or 2, wherein in the low power mode the at least one application processing unit's clock rate is lower than in high-power mode.

7. The information system according to claim 6, wherein the features are point-features, and/or the descriptors are rotation invariant, and/or the descriptors are scale invariant, in particular by performing feature extraction and/or feature description on different scaled versions of the original camera image or by running feature extracting and/or description algorithms extracting information at different scales.

8. The information system according to one of claims 1-7, wherein the system (3200) is configured such that an image is only recorded and and/or a detection is only tried, if another sensor has triggered such an event, in particular if one of an accelerometer or a compass or a gyroscope record little movement of the wearable information system and or record that the device is still moved at all.

11. The information system according to claim 10, wherein the gesture recognized is a movement by arm or hand, which "wipes" over the detected object.

12. The information system according to one of claims 1-11, wherein in the high-power mode, the system (3200) displays augmented reality information related to the detected object.

13. The information system according to one of claims 1-12, wherein the low-power mode is automatically activated when the detected object is not being detected.

14. The information system according to one of claims 1-13, wherein new reference features are downloaded from a remote server based on sensor measurements. 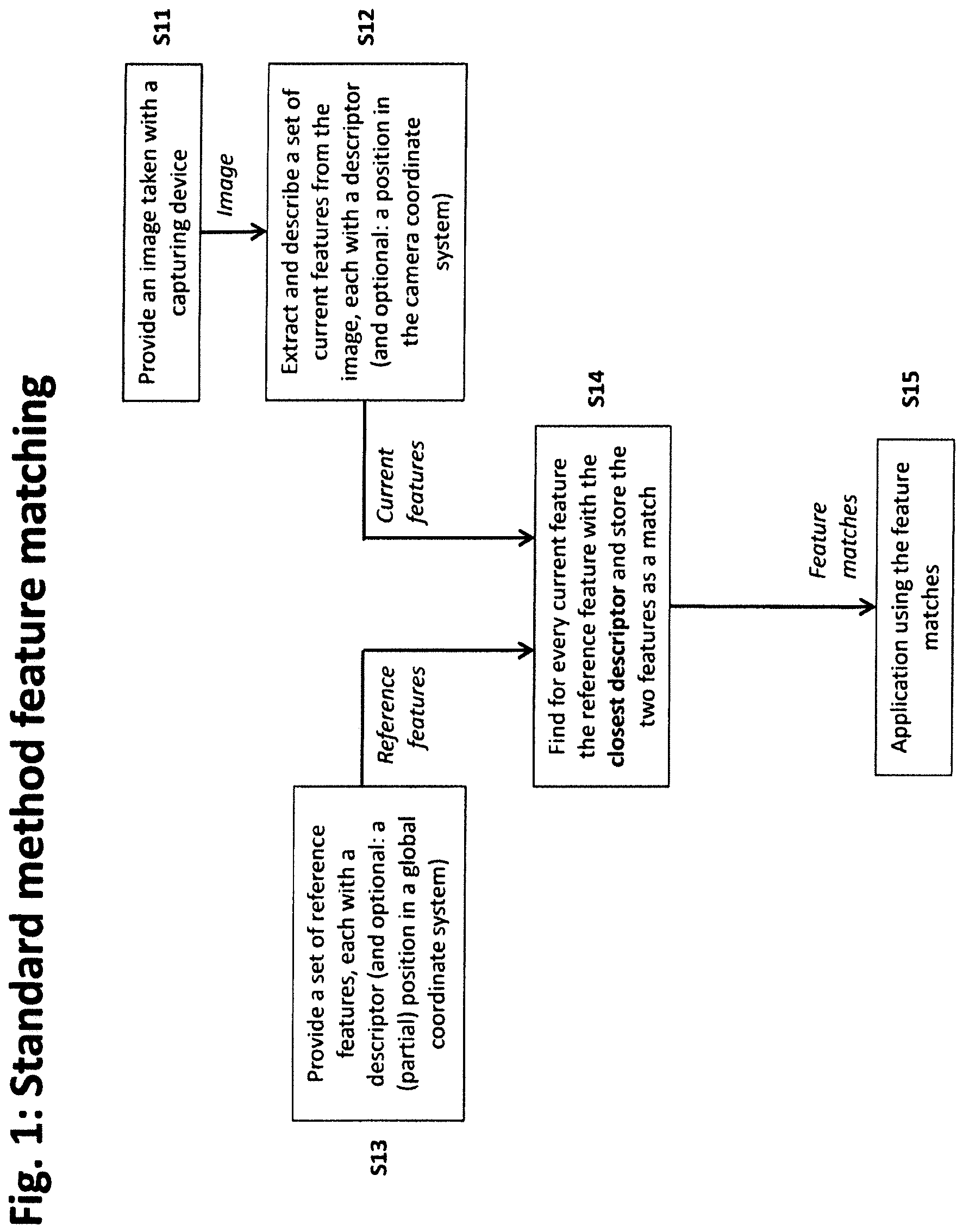 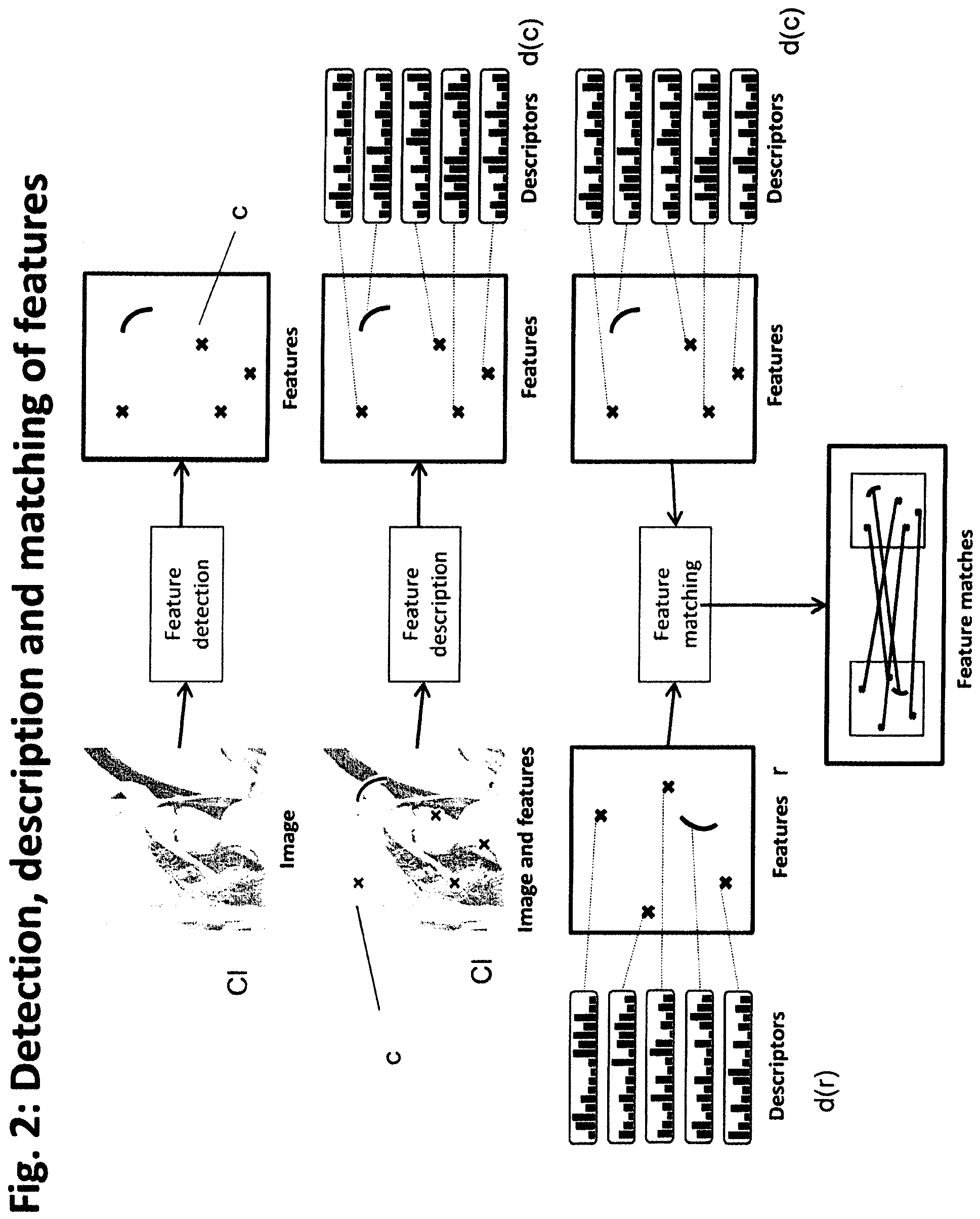 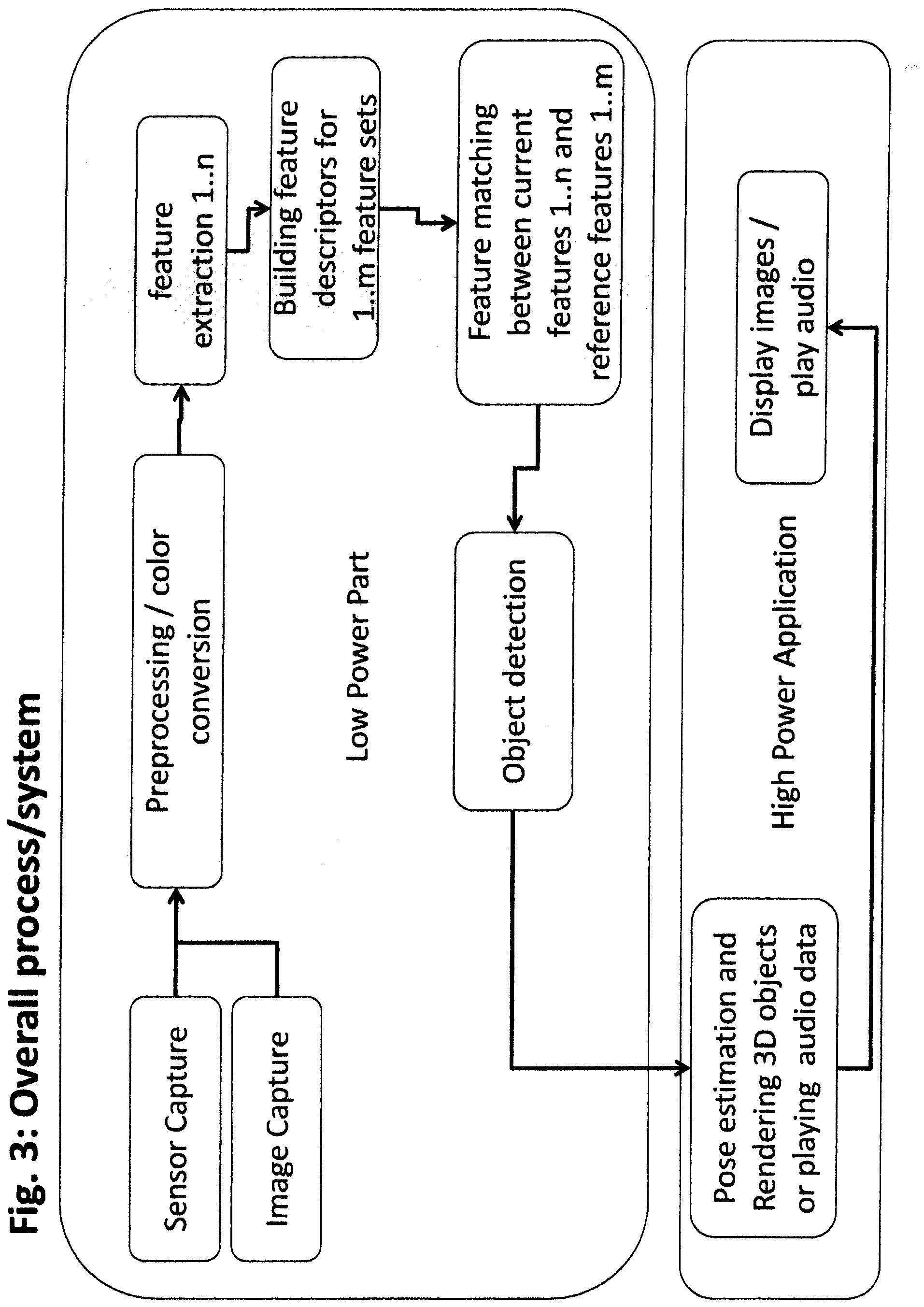 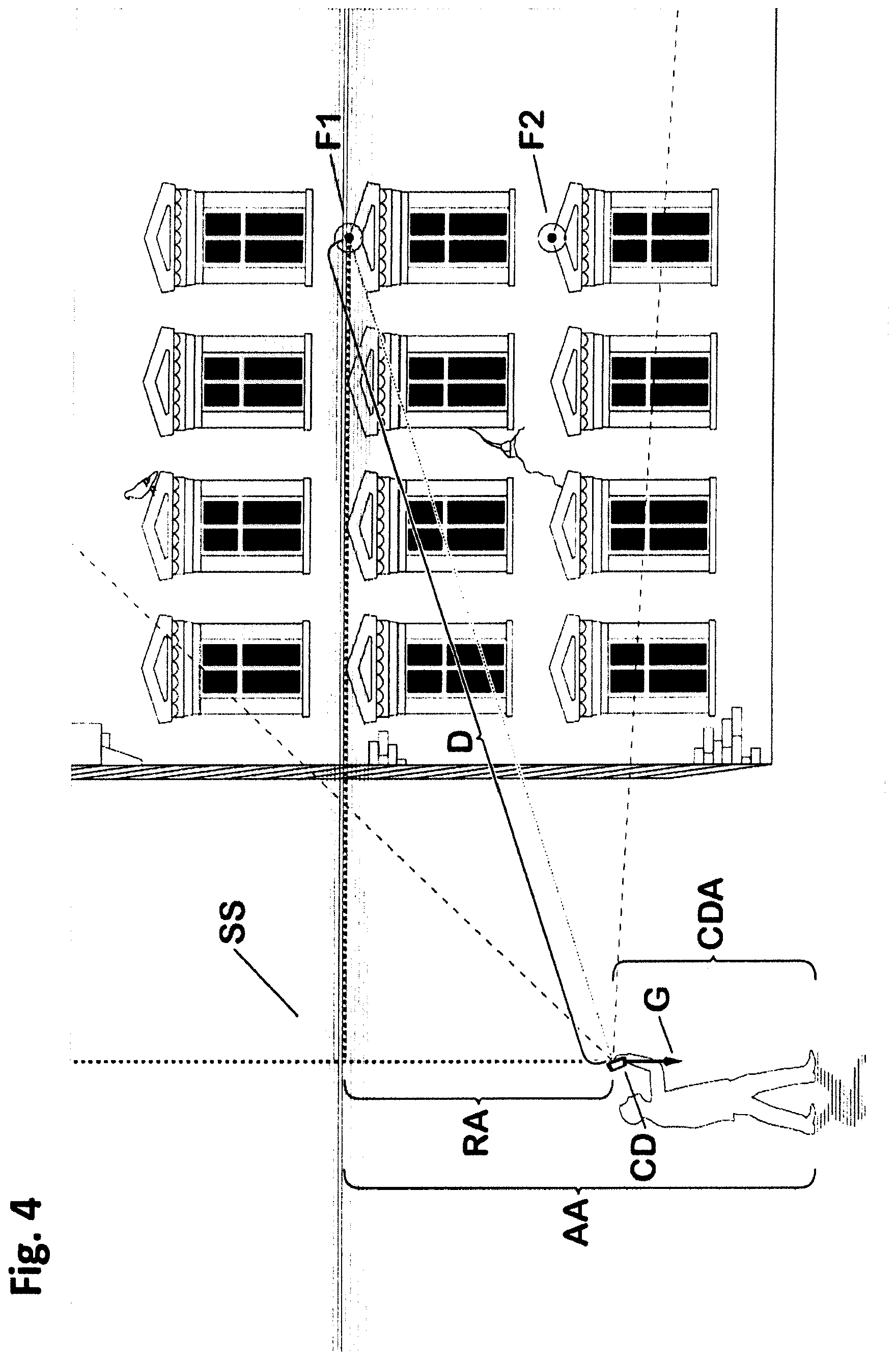 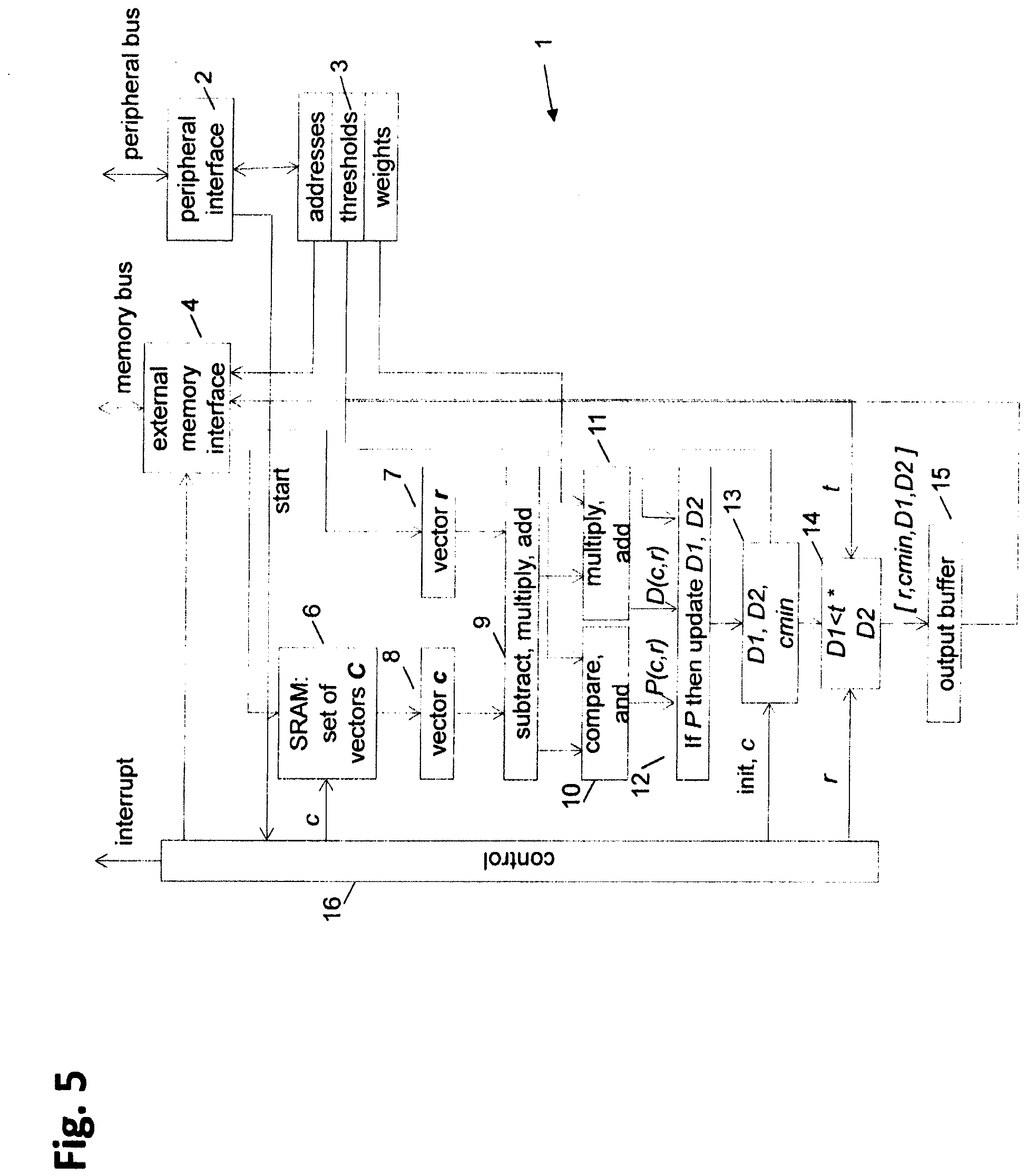 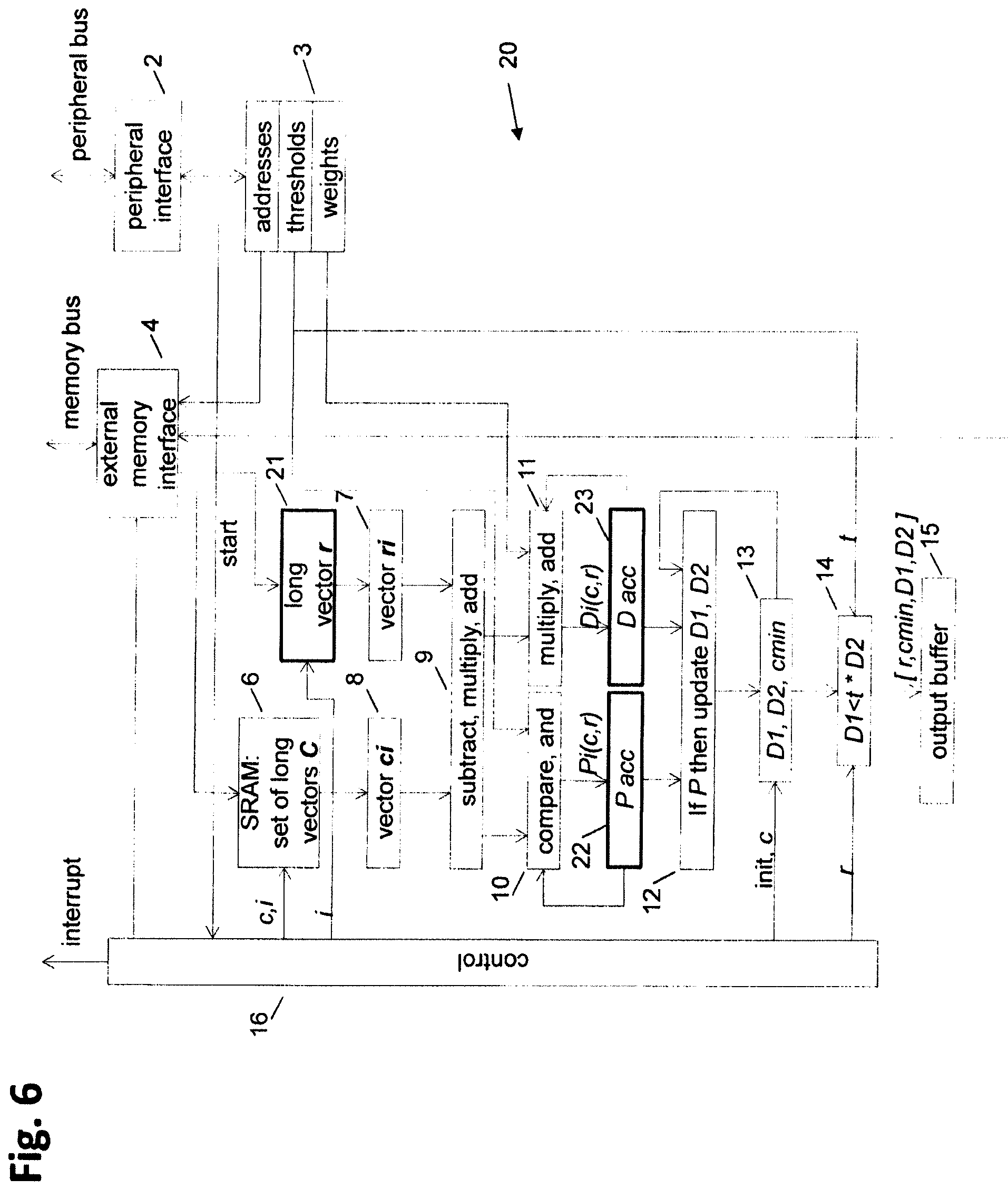 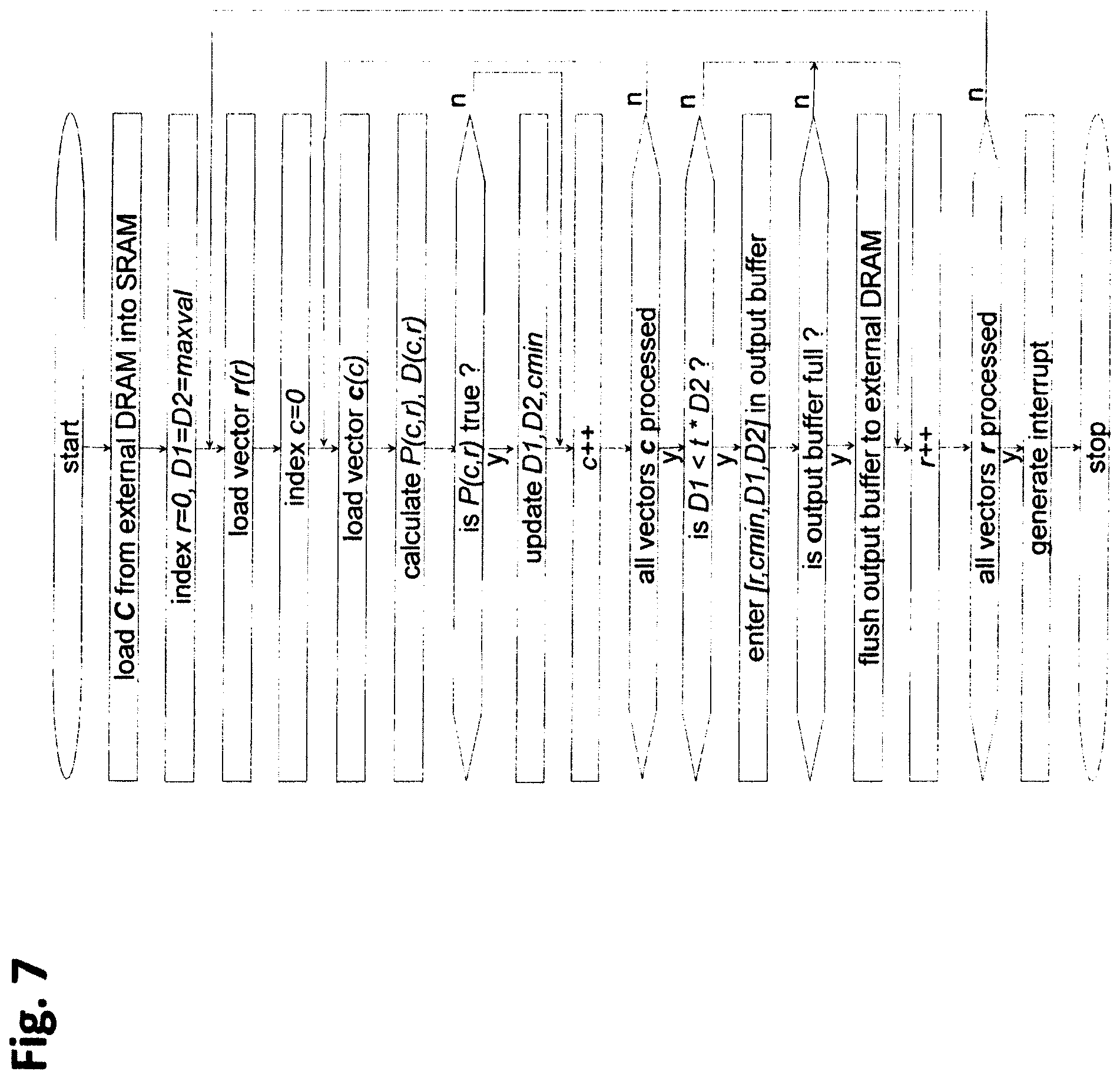 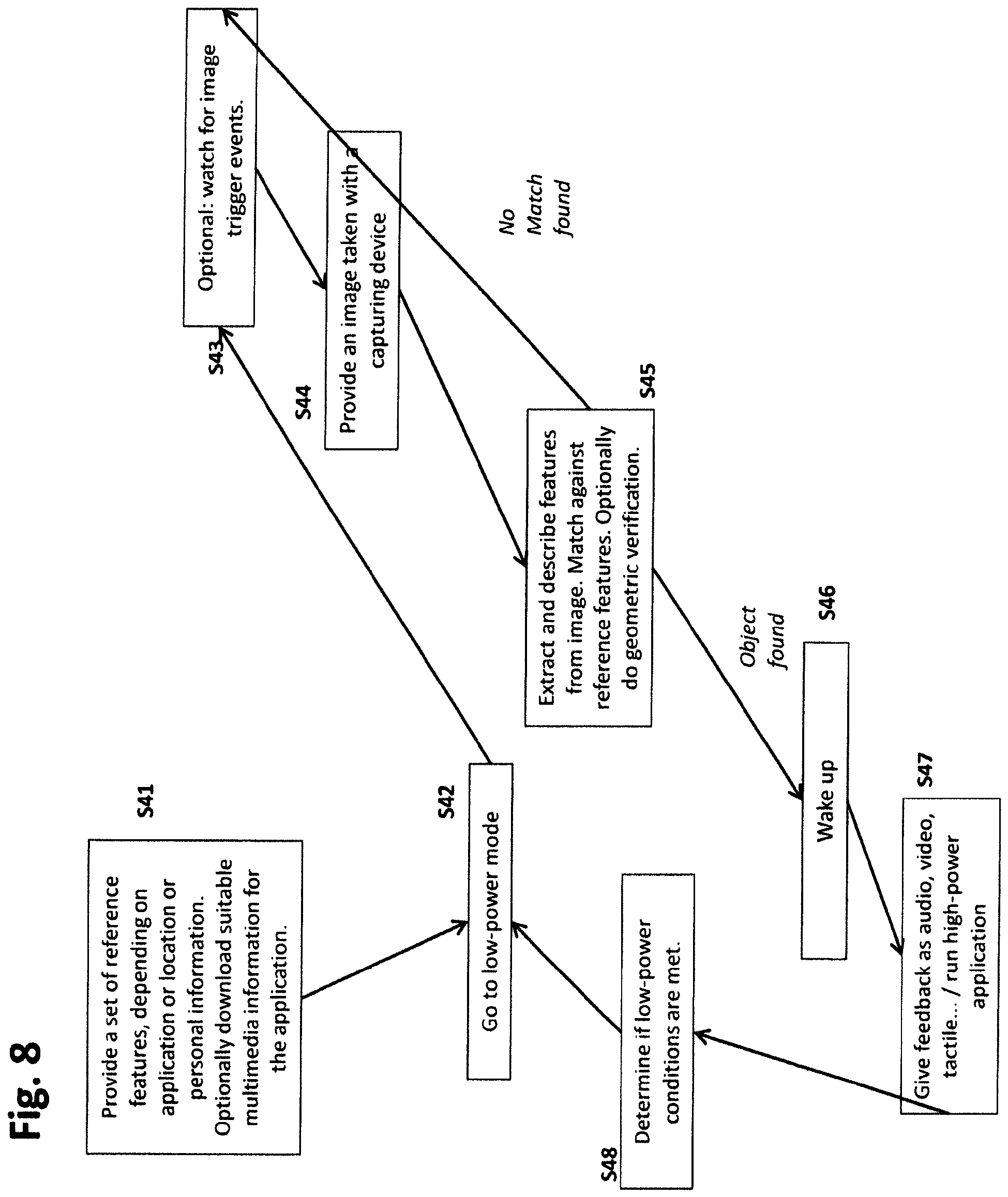 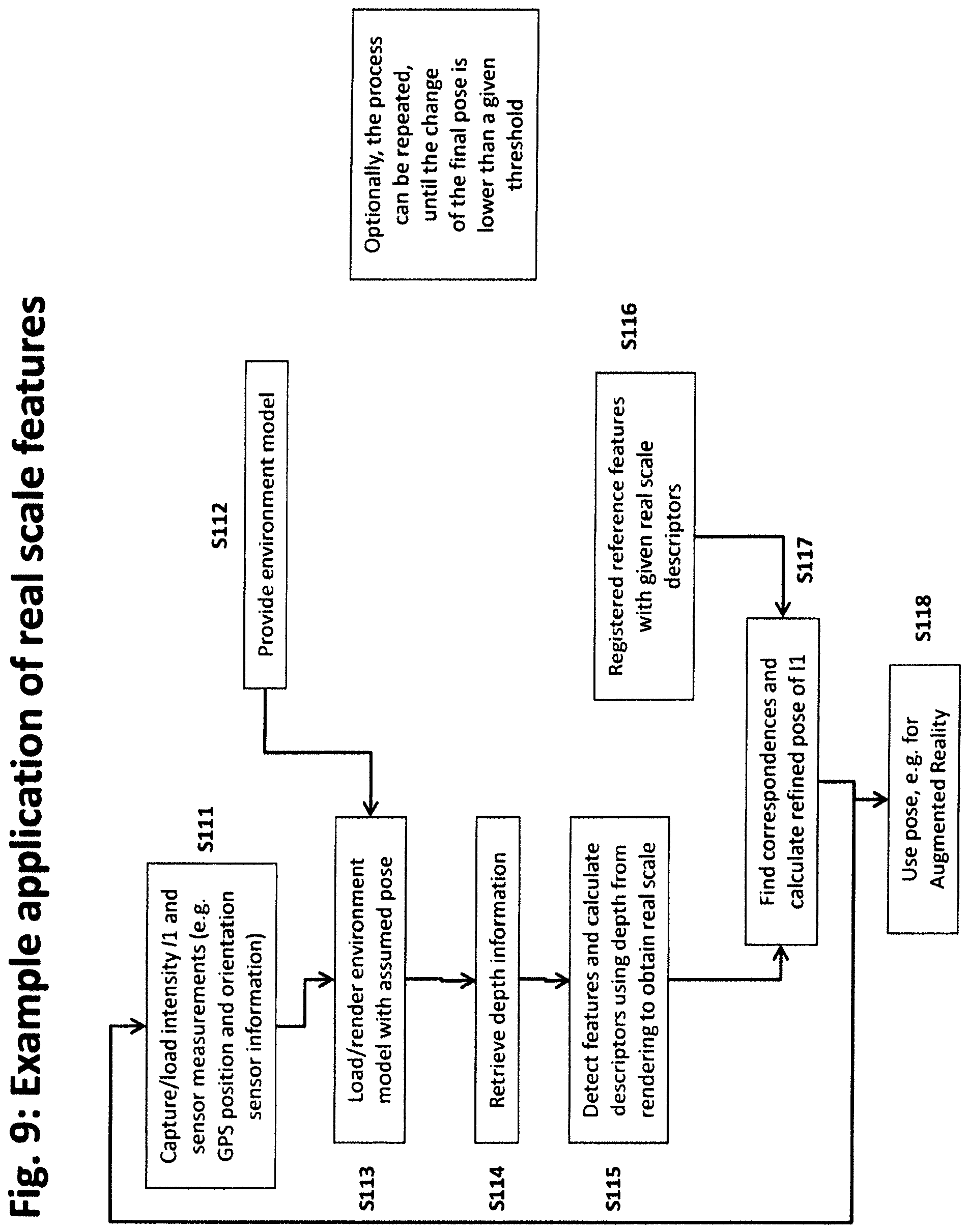 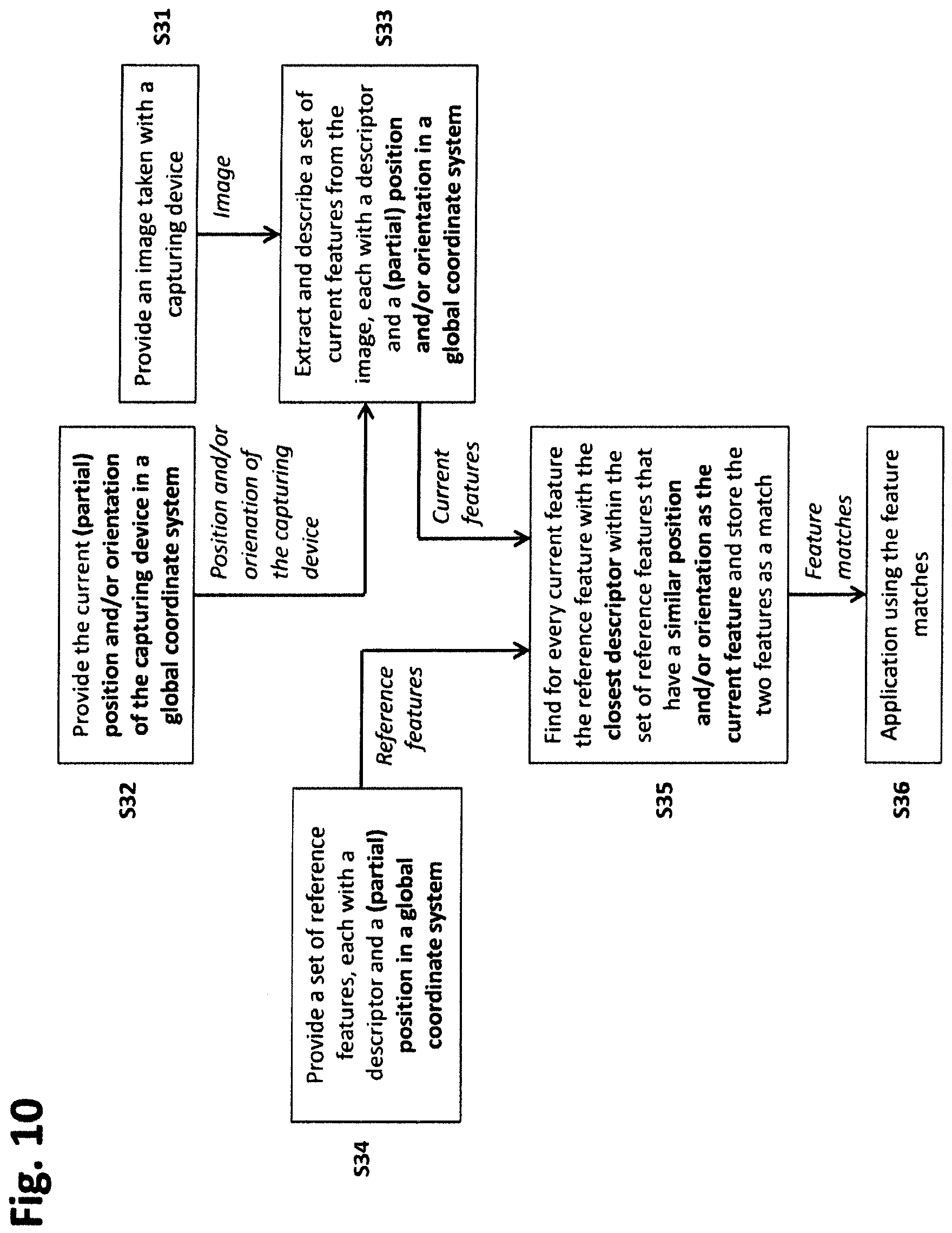 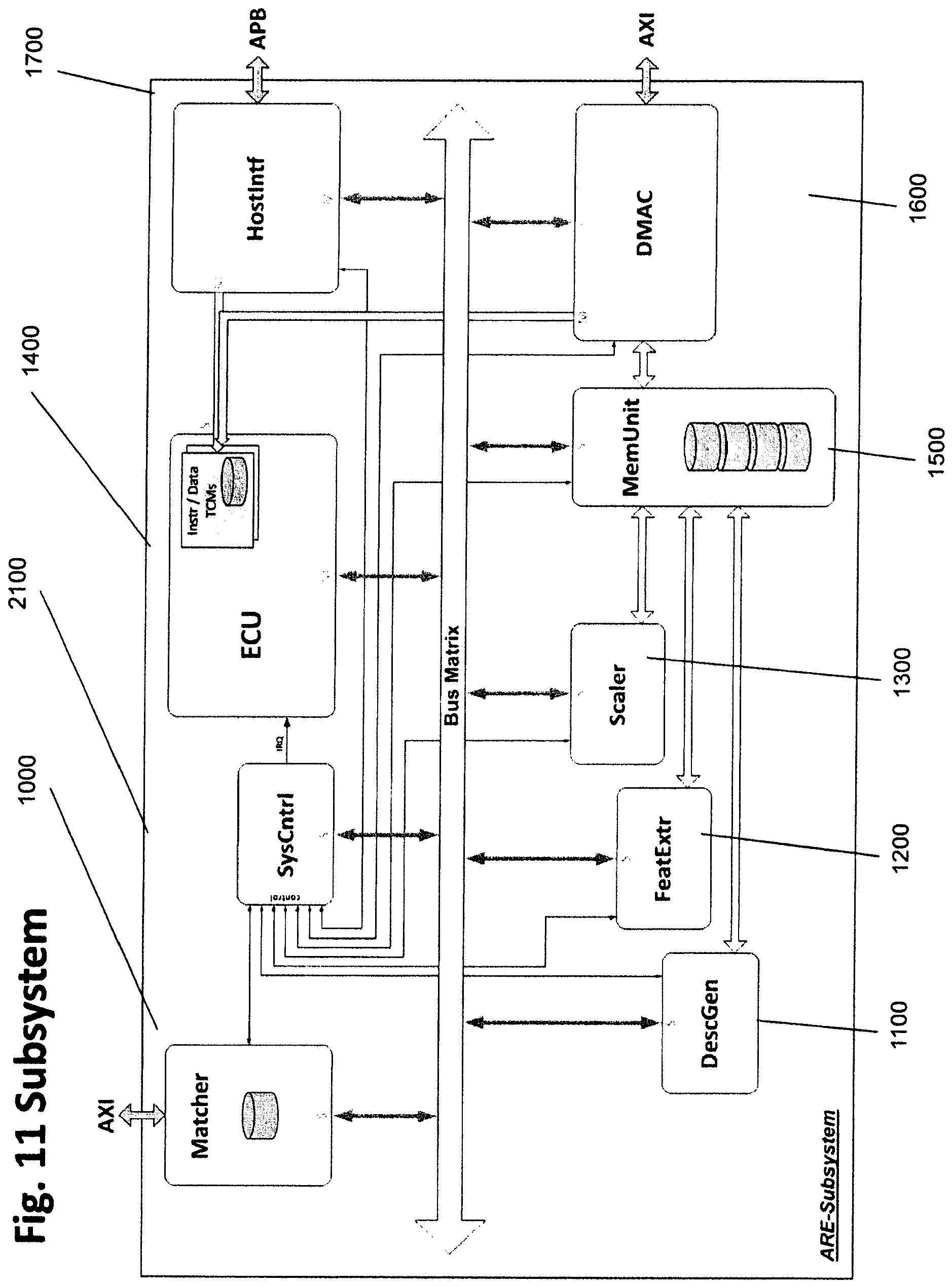 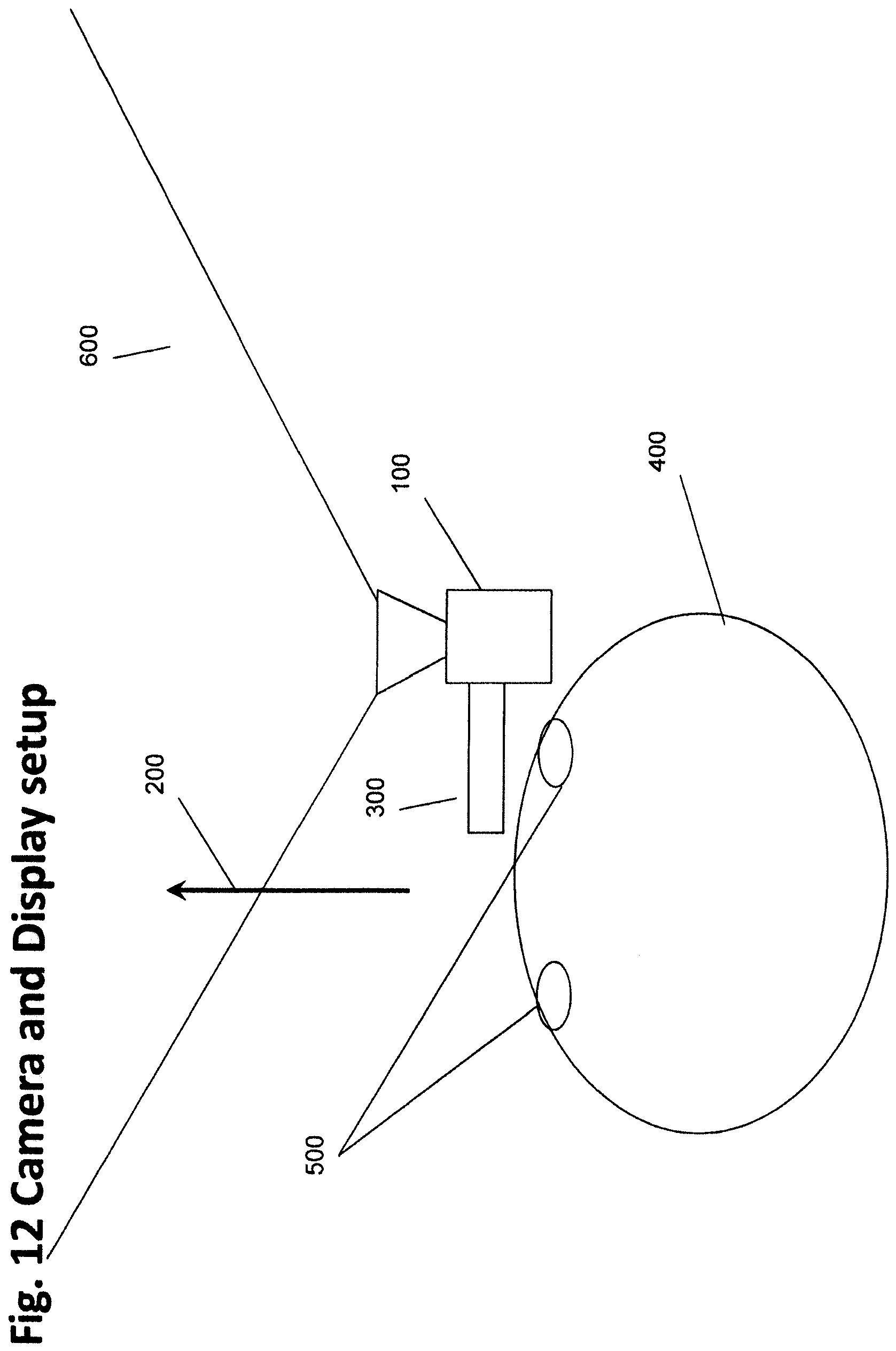 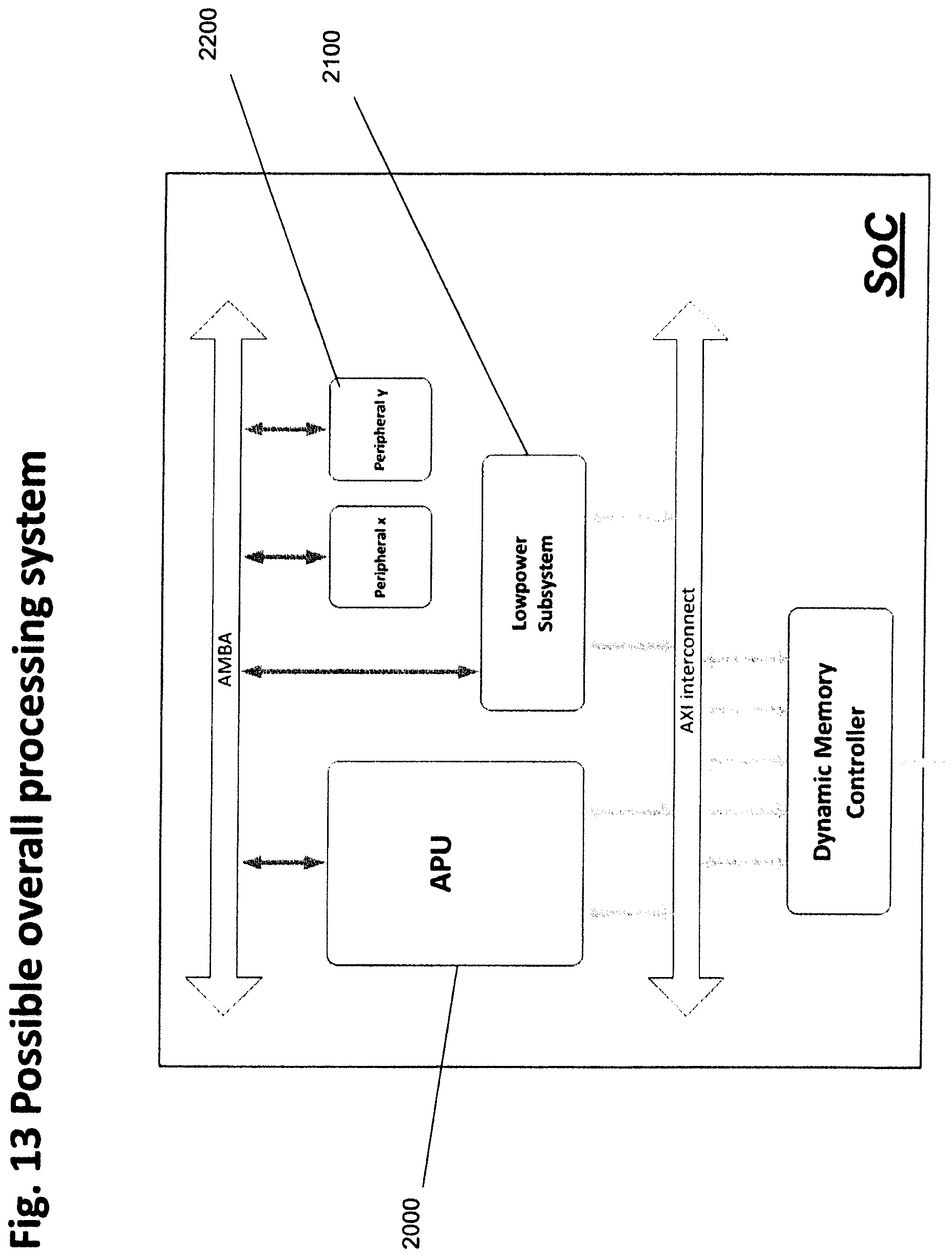 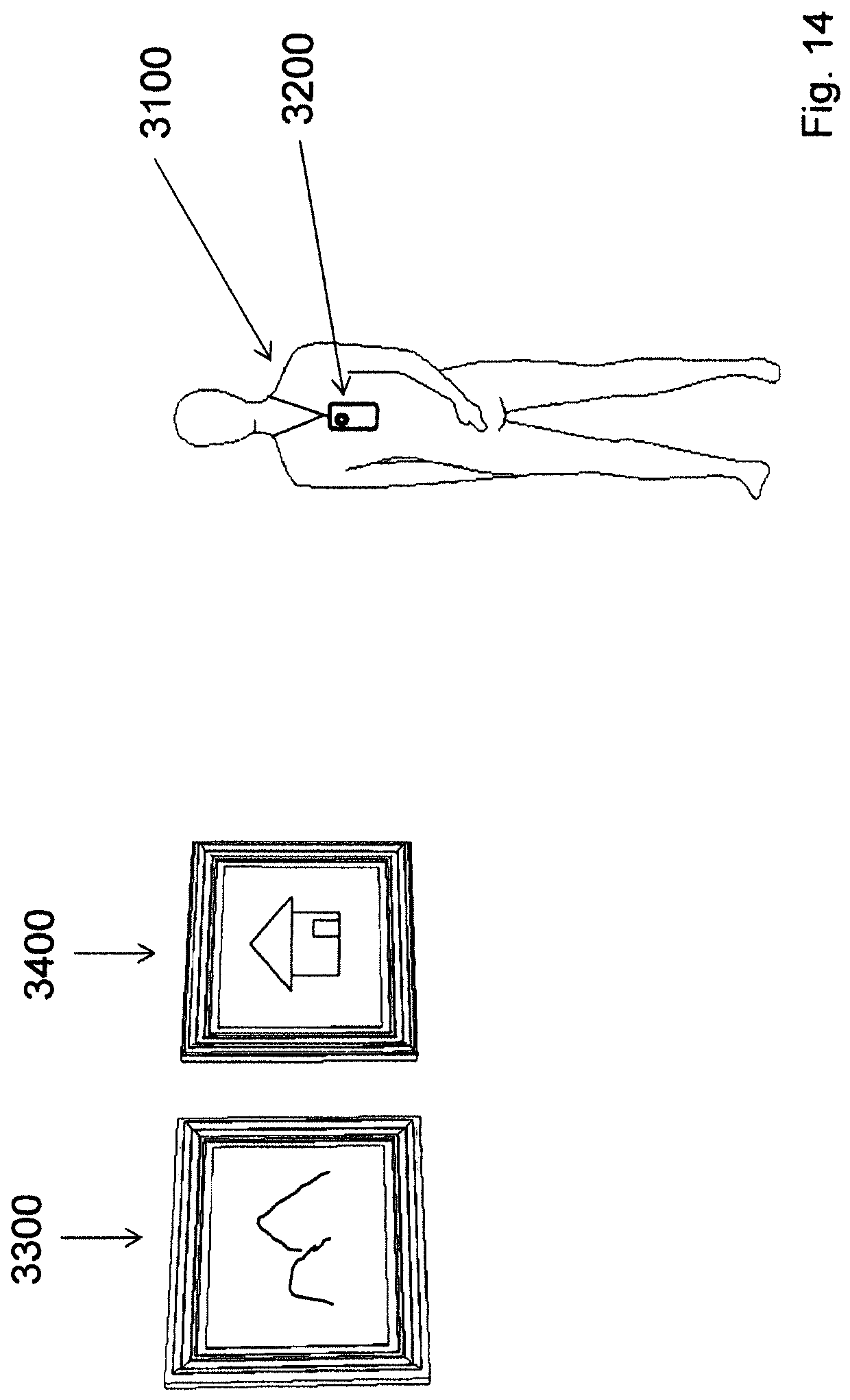