[0001] The present invention relates to the use of acid-stable proteases in animal feed in combination with anti-coccidial agents, in particular to the use of such proteases for increasing the performance of vaccinated animals.
[0002] The use of proteases in animal feed is known from the following documents: W095/28850 discloses an animal feed additive comprising a phytase and a proteolytic enzyme. Various proteolytic enzymes are specified at p. 7.
[0003] W096/05739 discloses an enzyme feed additive comprising xylanase and a protease. Suitable proteases are listed at p.25.W095/02044 discloses proteases derived from Aspergillus aculeatus, as well as the use in animal feed thereof.
[0004] US 3966971 discloses a process of obtaining protein from a vegetable protein source by treatment with an acid phytase and optionally a proteolytic enzyme. Suitable proteases are specified in column 2.
[0005] US 2006/134091 discloses the use of a combination of a protease and an inner salt of a quaternary amine carboxylic acid for the preparation of an agent for the treatment and/or prophylaxis of coccidiosis and bacterial infections such as necrotic enterities in animals.
[0006] PEEK H W ET AL: "Dietary protease can alleviate negative effects of a coccidiosis infection on production performance in broiler chickens", ANIMAL FEED SCIENCE AND TECHNOLOGY, ELSEVIER, AMSTERDAM, NL, vol. 150, no. 1-2, 30 March 2009, pages 151-159 also discloses experiments to determine the effect of dietary protease on coccidiosis infection.
[0007] J Parker ET AL: "Enzymes as feed additive to aid in responses against Eimeria species in coccidia-vaccinated broilers fed corn-soybean meal diets with different protein levels", Poultry science, 1 April 2007, pages 643-653 and C. L. Walk ET AL: "Effects of dietary enzymes on performance and intestinal goblet cell number of broilers exposed to a live coccidia oocyst vaccine", Poultry science, vol. 90, no. 1, 21 December 2010, pages 91-98 disclose research to evaluate the effects of dietary enzymes on broilers vaccinated a live coccidia oocyst vaccine.

[0008] Coccidia is a generic name given to single cell protozoan organisms that are intestinal parasites that infect both vertebrates and invertebrates. The organisms cause coccidiosis, and usually settle in the small intestine, such as the colon. Infection with coccidia for farm animals can not only seriously reduce growth, but it can be lifethreatening. Symptoms from coccidial infection include loss of epithelial cells, the denuding of gut mucosa, and diarrhoea (often with a concomitant loss of blood). For some farm animals, such as poultry, coccidial infection can be fatal, if not seriously damaging to the animal's health.
[0009] Poultry are particularly vulnerable for coccidiosis because of several reasons: (1) The parasitic cycle of 6 to 8 days hits them at a critical stage between weeks 2 and week 4, when maximum growth is usually expressed. Since the parasites virtually destroy the whole intestinal epithelium, the absorption of nutrients is dramatically reduced, which results in marked growth depression. Until slaughter at 5 or 6 weeks, there is not enough time to recover. (2) There are 7 species of Eimeria which can infect poultry, more than in any other animal category, and at least 4 of them are regularly seen in commercial operations. Thus, when one infectious cycle is concluded already another one can be at an early stage so that coccidiosis becomes chronic. (3) In poultry the most pathogenic species (Eimeria tenella, E. necatrix) are observed, which induce severe hemorrhages and in certain cases can cause a mortality of up to 50%. Such an acute case of coccidiosis could easily ruin a poultry farmer. (4) The intensive husbandry of poultry (100,000 chicks or more in one house) on deep litter facilitates access of poultry to the infectious stages of coccidia in the faeces via coprophagy and thus supports a fast spreading of the disease through a whole poultry flock. If the sanitary conditions are not rigorous, the disease will also transfer to other poultry houses on the same farm and stay on site for years.
[0010] In order to combat coccidiosis, animal feed is often supplemented with a coccidiostat and/or animals are vaccinated with a drug as for example with Coccivac®B, an anticoccidial vaccine of Shering-Plough Animal Health Corporation. Coccidiostats that have been approved by the EEC for use with poultry (chickens, turkeys, broilers and laying hens) include sulphonimides, amprolium, decoquinate, and ionophores.
[0011] It is well known that cocci-vaccination causes decrease of the performance of broiler chicken. In particular, cocci-vaccination causes reduction in feed intake and feed efficiency. Currently 20% of all broiler produced in US are vaccinated against coccidiocis. It is expected that the use of cocci-vacination will increase to 50% by 2020 in the broiler production in US. Therefore the use of cocci-vaccination has an enormous economic impact for the broiler producers.

[0012] It has been found surprisingly that the addition of at least one acid stable protease as defined hereineafter to the diet of cocci-vaccinated birds results in a significant improvement of animal performance. The inventors found that especially the use of serin proteases in combination with cocci-vaccination improves the performance of broiler chicken. In particular the use of serin proteases increases weight gain and improves Feed Conversion Ratio (FCR) of cocci-vaccinated birds. Therefore the use of such proteases can overcome the problems caused by the use of the cocci-vaccination.
[0013] The term "birds" includes poultry such as turkeys, ducks and chickens (including but not limited to broiler chicks, layers).

[0064] A floor pen trial was conducted using day old male birds Ross 708. A total of 27 pens were used in the trial and 10 birds were placed per pen on day 1 of age. The pens were randomly allocated across 3 treatments with 9 replicates/ treatment. The birds were fed nutritionally-adequate basal diets based on corn/soybean meal and adjusted to the bird age by feeding a starter diet from day 1 to 21 and a grower diet from day 22 to 42.

[0067] as Treatment 2 plus 400 ppm RONOZYME® enzyme blend (supplied by DSM Nutritional Products, Kaiseraugst, Switzerland)
[0068] Monteban was fed to suppress the effect of the Cocci Vac. Cocci-Vac induces immunity to coccidiosis by causing a low level of the disease.
[0069] The enzyme blend comprised:
[0070] At the end of the trial at day 42 the average bird weight and the average feed consumption were determined and the Feed Conversion Ration (FCR) was calculated by dividing the feed intake by the weight gain for each treatment.
[0071] The results are summarized in the following tables, wherein table 1 lists body weight at day 42 and table 2 lists the FCR at day 42.
Table 1. Average 42-day Body Weight
Table 2. Feed Conversion Ration day 42

[0072] The results clearly show that cocci vaccination (Treatment 2) decreased body weights and adversely affected FCR, whereas the coccidiostat (Treatment 1) eliminated these effects. The addition of the enzyme blend resulted in significant higher body weight and improved FCR compared to Treatment 2. Addition of the enzyme blend to the birds that experienced coccidiosis brought the performance of the birds to that near of birds that were fed the coccidiostat.

[0073] A floor pen trial was conducted using day old male birds Cobb X Cobb chicks. A total of 2,160 were allocated to the study. The experiment consisted of 48 pens of 45 male broiler chickens. Treatments were replicated in eight (8) blocks with six (6) treatments randomized in each. The birds were fed nutritionally-adequate basal diets based on corn/soybean meal and adjusted to the bird age by feeding a starter diet from day 1 to 16 and a grower diet from day 17 to 32 and a finisher diet from day 33 to 42. The 6 treatment were as follow:

[0074]
[0075] All birds received Cocci Vac® B on day 1 of age administered nasally in the hatchery except the positive control birds that were given a standard dose of the coccidiostat Salinomcyin of 60 g/ tone of feed throughout the study
[0076] Salinomcyin is the most used coccidiostate that suppress development of the very common decease coccidiosis.
[0077] Cocci Vac® B induces immunity to coccidiosis by causing a low level of the disease.
[0078] At the end of the trial at day 42 the average bird weight (Avg. Wt. Gain) and the average feed consumption (Feed Consump.) were determined and the Feed Conversion Ration (FRC) was calculated by dividing the feed intake by the weight gain for each treatment
[0079] Cocci Vac (Treatment 2) decreased body weights and adversely affected FCR, compared to the PC given the Salinomcyin treatment.
[0080] The addition of the protease RONOZYME ProAct on top of the Cocci Vac® B resulted in significant improved FCR compared to the Cocci Vac (Treatment 2). Addition of any of the enzyme blend together with the RONOZYME PROACT product resulted in even further improvement of the to the birds that experienced coccidiosis brought the performance of the birds to that near of birds that were fed the coccidiostat.

<120> Additions of ProAct to cocci-vaccinated birds 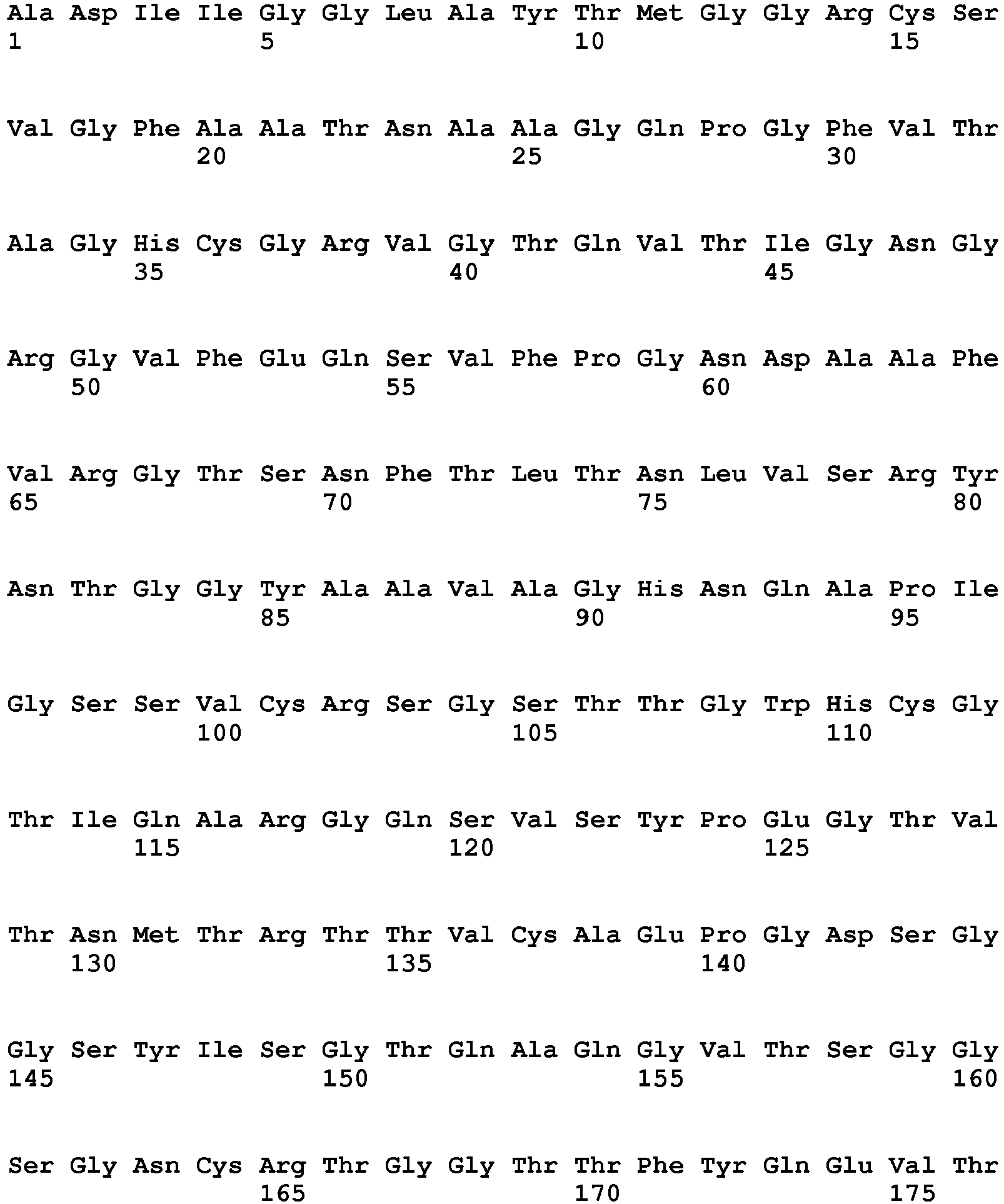 1. Use of at least one acid-stable protease in combination with anti-coccidial vaccination of birds for increasing weight gain and/or improving the Feed Conversion Ratio (FCR) in the animal compared to a second treatment (control) with no addition of the protease to the animal feed, wherein the protease has an identity of at least 70% to SEQ ID NO: 1.

2. Use according to claim 1, wherein the protease is used in feed for birds which includes poultry such as turkeys, ducks and chickens.

3. The use of claim 2, wherein the intended dosage of the protease is 0.01 - 200 mg protease enzyme protein per kg feed.

4. The use according to any of claims 1 to 3, wherein the FCR is improved by at least 1.0% compared to the control.

5. The use according to claim 4, wherein the FCR is improved by at least 5.0% compared to the control.

6. The use according to any of claims 1 to 5, wherein the use further comprises a phytase, xylanase, galactanase, beta-glucanase, amylase and/or cellulose.