[0001] The present disclosure relates to systems for analyzing performance of a cooling system, and more particularly to a comprehensive system and method for analyzing and modeling a plurality of diverse components of a cooling system for the purpose of determining and/or predicting the cooling capability of the system in response to a plurality of device operational parameters and user defined inputs.

[0002] The statements in this section merely provide background information related to the present disclosure and may not constitute prior art.
[0003] Improving performance of cooling systems and controlling such cooling systems is rapidly gaining attention as the cooling needs for various facilities, in particular data centers, continue to grow in size. In particular, with a chilled water ("CW") cooling system, a number of components operate to remove heat from a load, where the load may be created by a wide variety of different types of devices. In one example the load may be heat which is generated within data centers by dozens, hundreds or thousands of servers and other IT and/or network equipment. The basic CW cooling system may be understood, in one example, as including one or more chillers, one or more CW pumps, a bypass, one or more cooling tower pumps, one or more cooling towers, makeup water filtration controls, one or more variable frequency drives (VFDs) with controls, and associated piping connecting the aforementioned components. The performance and/or equipment set points associated with any one or more of these devices can have a bearing on the performance output of individual components and respectively the entire CW system during transition and balance. Presently there is no known system which is able to use the known information, performance abilities or performance curves of various ones of the components of a CW system to model how various important performance parameters of the CW system, such as total gallons per minute (GPM), temperature differential (ΔT) and SCWT (Supply Chilled Water Temperature) are likely to be affected if varying equipment set points are applied to one or more of the components of the CW system. Moreover, there is no way to be able to predict how a performance change (or user/system changed set point) for one specific component may affect operation of one or more of the other components of the system that may be receiving the direct or indirect output from the specific component.
[0004] US 6085532 relates to a method of controlling chiller capacity in a chiller system. The method comprises the steps of: measuring entering the fluid temperature of a fluid entering a heat exchanger; measuring the fluid temperature of the fluid leaving the heat exchanger; determining a desired leaving fluid temperature; establishing chiller capacity as a function of the difference between leaving fluid temperature and the desired leaving fluid temperature; and adjusting the determined chiller capacity as a function of the difference between entering fluid temperature and the desired leaving fluid temperature.
[0005] The present invention is set out in the independent claim, with some optional features set out in the claims dependent thereto.

[0006] The drawings described herein are for illustration purposes only and are not intended to limit the scope of the invention, which is defined by the independent claim.

Figure 1 is a block diagram of various subportions of the system that may be used to calculate performance characteristics of both the indoor operating conditions and the CW system components taking into account the permissible operating settings/ranges for each CW device of the CW system;

Figure 3 is a high level flowchart setting forth major operations that may be performed by the system of the present disclosure in optimizing operation of the CW system to meet the load and/or customer specified requirements;

Figure 4 is a graph illustrating how significant differences in efficiencies can be achieved depending on relatively small changes in supply chilled water temperature (SCWT) and supply/remote air temperature (SAT), at a given load and wet bulb (WB) temperature;

Figure 5 is a chart that shows how the system can be used to predict, for a given load and WB temperature, what types of energy savings may be obtained depending on variables that the user has set;

Figure 6 is graph that may be presented to the user that shows the user the direction that the system is predicting the load and the WB temperature to take based on some preselected form of historical operating data (e.g., time of day or external information source); and

Figure 7 is a diagram 500 showing how variables for the load and the various components making up a CW system may be taken into account by the system 10 in determining balancing points for every possible permissible equipment configuration for the CW system.

1. A method for analyzing performance of a chilled water (CW) system having a plurality of CW components, the method comprising:

considering at least one of a user set or system measured ambient wet bulb (WB) temperature for an environment in which at least a subplurality of the CW components are located;

for each one of the calculated equivalent loop conditions, using a processor to generate information for balancing the CW components by selecting specific operating points of the CW system, given the user set or system measured WB temperature, to meet load requirements imposed by the load.

provided by the user; or

maintenance of one or more of the CW components; and

total cost of operation of the CW system. 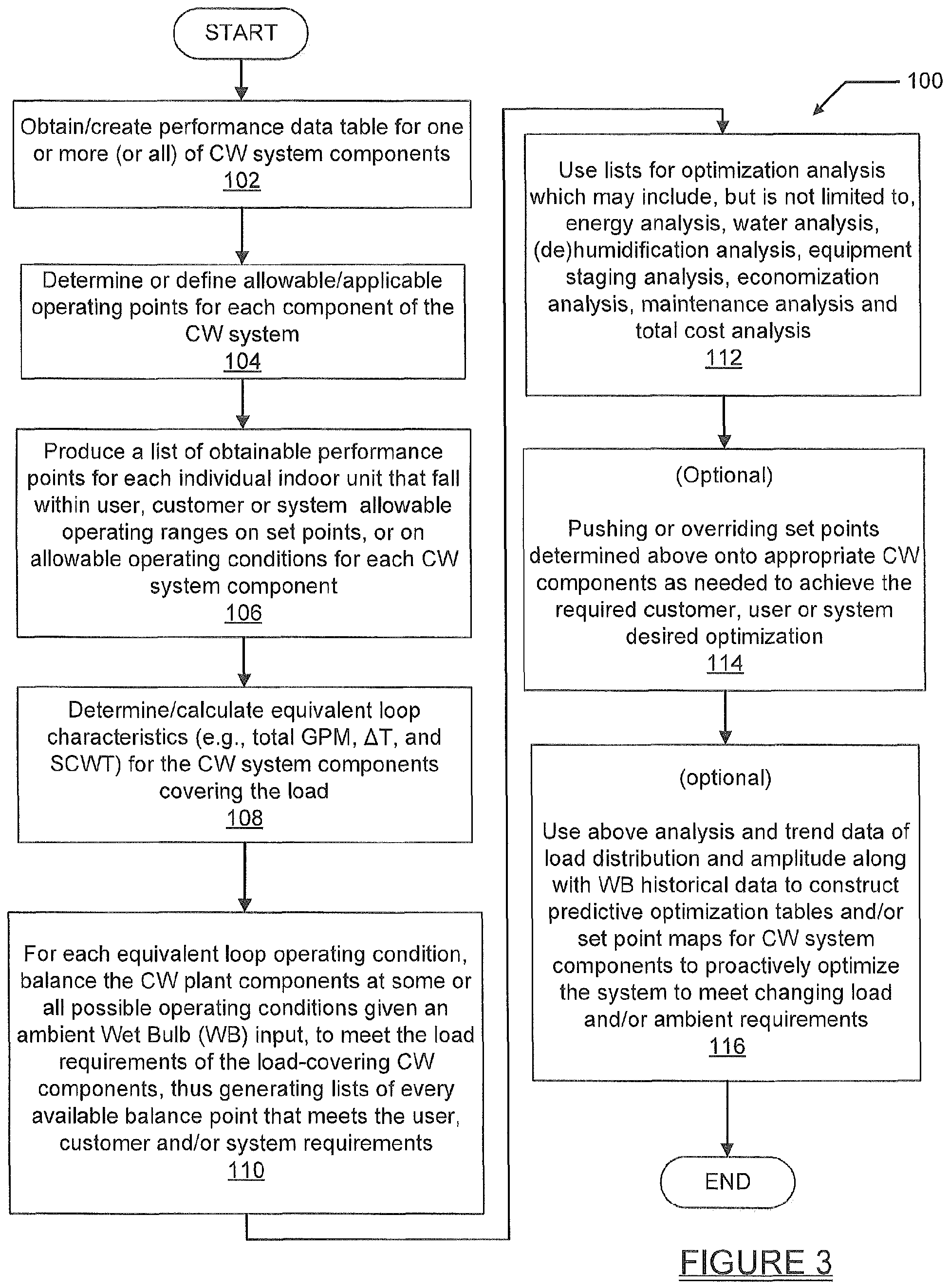 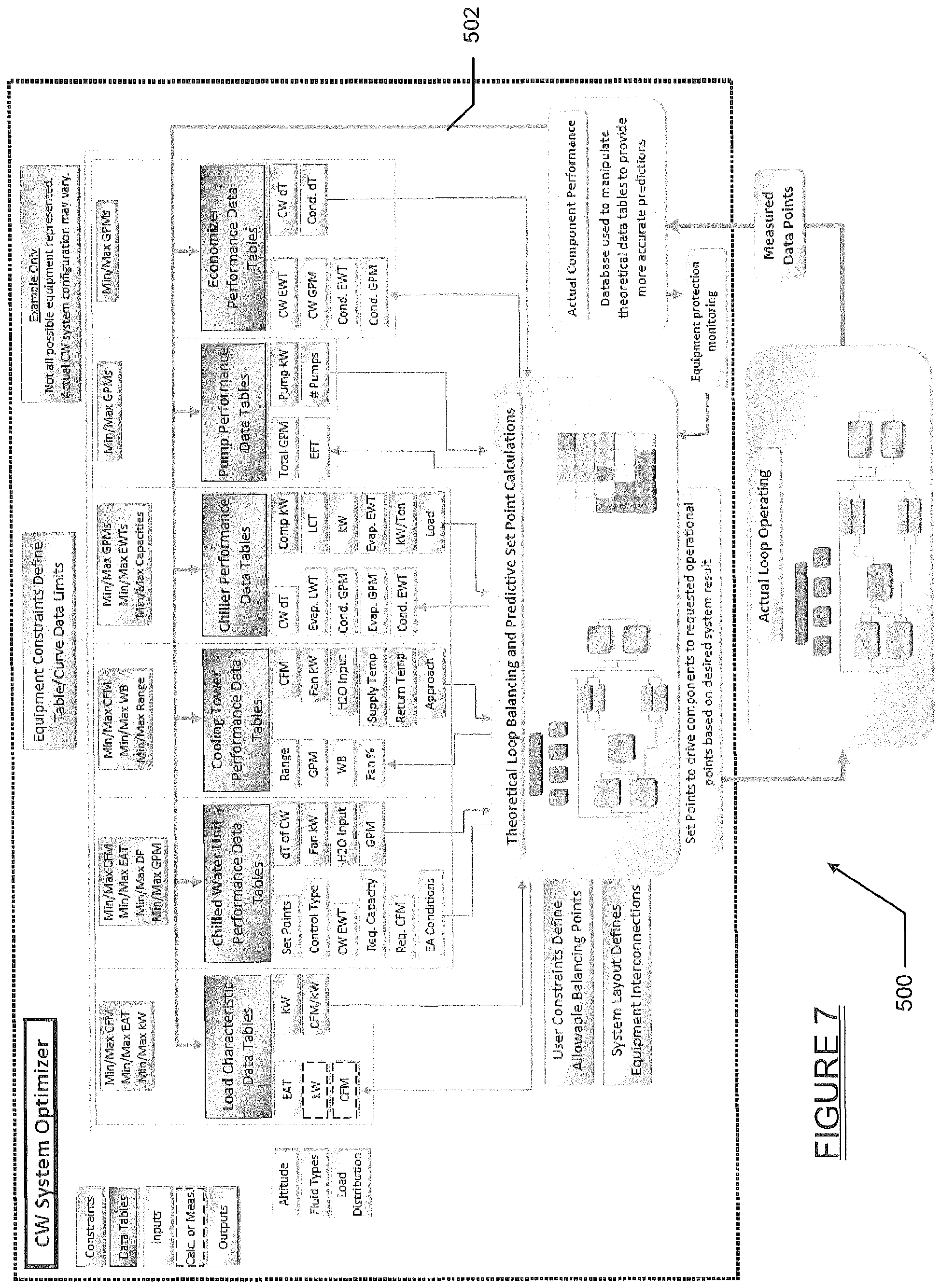