[0001] This application is a continuation of U.S. Application No. 13/856,389, filed April 3, 2013, and entitled Tile-Based Compression and Decompression for Graphic Applications.

[0002] This invention relates to methods for compressing image data.

[0003] Modern graphics engines typically render or compose images into a frame buffer, which is usually the system memory or DDR. In many such systems, the graphic hardware and system memory are not on the same die. Graphic hardware is also often pushed to its limit to process higher resolution, complex graphics, as well as dealing with multiple sources and targets for graphics data.
[0004] As a result, increasing amounts of data need to be moved around the graphics and other sub-systems very quickly. Moving large amounts of data at very high speed presents challenges with respect to power, thermal, and performance requirements. It is therefore crucial to reduce bandwidth required for data moving in and out of the system memory. Many systems are operable to compress data, store it, and then uncompress the data when it is needed.
[0005] US 7 342 590 B1 relates to methods, circuits and apparatus for reducing memory bandwidth used by a graphics processor. Thereby, uncompressed tiles are read from a display buffer portion of a graphics memory and received by an encoder. The uncompressed tiles are compressed and written back to the graphics memory. When a tile is needed again before it has been modified, the compressed version is read from memory, uncompressed, and displayed. To reduce the number of unnecessary writes of compressed tiles to memory, a tile is only written to memory if it has remained static for some number of refresh cycles. Also, to prevent a large number of compressed tiles being written to the display buffer in one refresh cycle, the encoder can be throttled after a number of tiles have been written. Validity information can be stored for use by a CRTC. If a tile is updated, the validity information is updated such that invalid compressed data is not read from memory and displayed.
[0006] US 7 039 241 B1 relates to a scheme for compressing the color components of image data. Thereby, the pixel data is grouped into a plurality of tiles for storage. A test is performed to determine if a tile can be compressed so that its size after compression is less than its size before compression. If so, the tile is compressed. A tile table is provided that includes a flag that can be set for each tile that is compressed. In a data transfer from memory to a graphics processor, the tile table is examined to identify those tiles that are compressed and must be decompressed prior to use. In one embodiment, a number of compression schemes are available for use on a tile and the best compression scheme is chosen on a tile by tile basis. Moreover each compression scheme includes an identifying code stored as a value in each compressed tile.
[0007] The systems and methods described herein provide an improved approach for incorporating compression and decompression of image data into a graphics processing system. The present invention is defined by the independent claim. The dependent claims specify advantageous embodiments of the invention.

Fig. 1 is a schematic block diagram of a computing system suitable for implementing methods in accordance with embodiments of the invention;

Fig. 2 is a schematic block diagram of a components of graphics and display processing system suitable for implementing methods in accordance with an embodiment of the invention;

Fig. 3 is a process flow diagram of a method for in-line decompression of graphics data in accordance with an embodiment of the invention;

Fig. 4 is a process flow diagram of a method for compressing graphics data in accordance with an embodiment of the invention;

Fig. 5 is a process flow diagram of a method for calculating a symbol for a pixel error in accordance with an embodiment of the invention;

Fig. 6 is a process flow diagram of a method for coding a symbol for a pixel error in accordance with an embodiment of the invention;

Fig. 7 is a process flow diagram of a method for coding least significant bits of a pixel error in accordance with an embodiment of the invention;

Fig. 8 is a process flow diagram of a method for decoding compressed graphics data in accordance with an embodiment of the invention;

Fig. 9 is a process flow diagram of a method for extracting a symbol from compressed graphics data in accordance with an embodiment of the invention;

Fig. 10 is a process flow diagram of a method for decoding an interleaved error extracted from compressed graphics data in accordance with an embodiment of the invention;

Fig. 11 is a process flow diagram of a method for extracting a final pixel value from decompressed error data;

Fig. 12 is a process flow diagram of a method for formatting compressed tile data for streaming in accordance with an embodiment of the invention; and

Fig. 13 is a process flow diagram of a method for compressing graphics data including alpha values in accordance with an embodiment of the invention.

[0079] Referring to Fig. 13, the methods described hereinabove illustrate compression and decompression techniques for pixels including RGB components. Fig. 13 illustrates a method 1300 for compressing pixels including RGBα components.
[0080] The method 1300 may include inserting 1302 two bits of Huffman coded symbols, such as a first contiguous segment of such bits in the same manner as for the method 1200. Likewise a length of non-zero sign bits for the pixels of a tile may be inserted 1304, in the same manner as for the method 1200. An initial pixel (RGB values thereof) may also be inserted 1306. An alpha value for the initial pixel may also be inserted 1306.
[0081] Alpha values for remaining pixels may be compressed in groups, such as groups of 4 pixels. The representation for a group of pixels may include three stages. As for the method 1200, the bits for each stage may be grouped together, e.g. all stage 1 bits in a contiguous segment, all stage 2 bits in one contiguous segment, and all stage 3 bits in one contiguous segment.
[0082] Stage 1 for a group of pixels may include a bit indicating if an error for any pixel of the group of pixels is not zero, where the error for a pixel is a difference between the alpha value for the pixel and the initial alpha value. For example, a stage 1 bit equal to 0 indicates that all errors for all pixels in the group are equal to zero. A stage 1 bit equal to 1 indicates that at least one of the errors is not equal to zero.
[0083] Stage 2 for a group of pixels may include three bits for each pixel indicating a size of the error for each pixel. For example, the error may be a value from 0 to 7 (b111) for each pixel. If the error for a pixel is greater than 7, the stage 2 bits for that pixel may be set equal to 7.
[0084] For pixels with errors other than 0 and 7, the stage 3 bits may include a sign bit indicating the sign of the error and the least significant bit (LSB) of the error. For pixels with errors equal to 0, no sign or LSB is included in stage 3. For pixels with errors larger than 7, stage 3 will include the raw alpha value.
[0085] Referring again to Fig. 13, the method 1300 may include inserting 1310 the stage 1 bits, inserting 1312 a length of the stage 3 bits, inserting. 1314 the stage 2 bits, and inserting 1316 the stage 3 bits. As noted above, inserting the bits for a stage may include inserting all bits for that stage for all pixels in the tile. Inasmuch as the length of stage 2 can be readily determined from the stage 1 bits (e.g. 9 bits for a stage 2 bit of 1), a length of stage 2 may be omitted in some embodiments.
[0086] The method 1300 may further include inserting 1318 remaining Huffman code (e.g. remaining bits of Sym), e.g. a second contiguous segment as for the method 1200. The method 1300 may also include inserting 1320 signs for non zero interleaved errors such as a string of sign bits, and inserting 1322 encoded least significant bits (LSB), such as a third contiguous segment in the same manner as for the method 1200.
[0087] As an example, a bit stream or stored representation of a compressed tile according to the method 1300 may be arranged in the following order: the first contiguous segment, the length of the sign bit string, the initial pixel, the initial alpha value, stage 1 alpha bits, a length of stage 3 alpha bits, the stage 2 alpha bits, and the stage 3 alpha bits, the second contiguous segment, the sign bit string, and the third contiguous segment.
[0088] The present invention may be embodied in other specific forms without departing from its essential characteristics. The described embodiments are to be considered in all respects only as illustrative, and not restrictive. The scope of the invention is, therefore, indicated by the appended claims, rather than by the foregoing description. All changes which come within the meaning of the claims are to be embraced within their scope.
[0089] According to an exemplary embodiment, systems and method for tile-based compression are disclosed. Image data, such as a frame, may be divided into tiles. The tiles may be sized based on a size of a line buffer. Tiles are compressed and decompressed individually. As portions of the image frame are updated, corresponding updated tiles may be compressed and stored. Likewise, as tiles are accessed they may be de-compressed and streamed to a requesting device. In some embodiments, a decoder operable to decompress tiles may be interposed between a memory device and a requesting device. Data encoding one or more compressed tiles may be grouped to enable decompression at a rate of four pixels per clock cycle. Methods for compressing image data including both RGB and RGBα components are disclosed.

1. A method for data compression, the method comprising:

streaming the first and second symbol portions, any third portion, and signs of any of the errors that are not equal to zero,

wherein streaming the first and second symbol portions, any third symbol portion, and signs of any of the errors that are not equal to zero further comprises:

streaming the first symbol portions of the plurality of pixels as a first contiguous segment;

streaming the second symbol portions of the plurality of pixels as a second contiguous segment;

obtaining a third contiguous segment including any third symbol portions;

streaming the signs of the errors as a fourth contiguous segment..

streaming the first and second symbol portions, any third portion, and signs of any of the errors that are not equal to zero to a decoder in response to a request from a second electronic device; and

transmitting a decoded pixel to the second electronic device,

wherein the second electronic device may be a display controller. 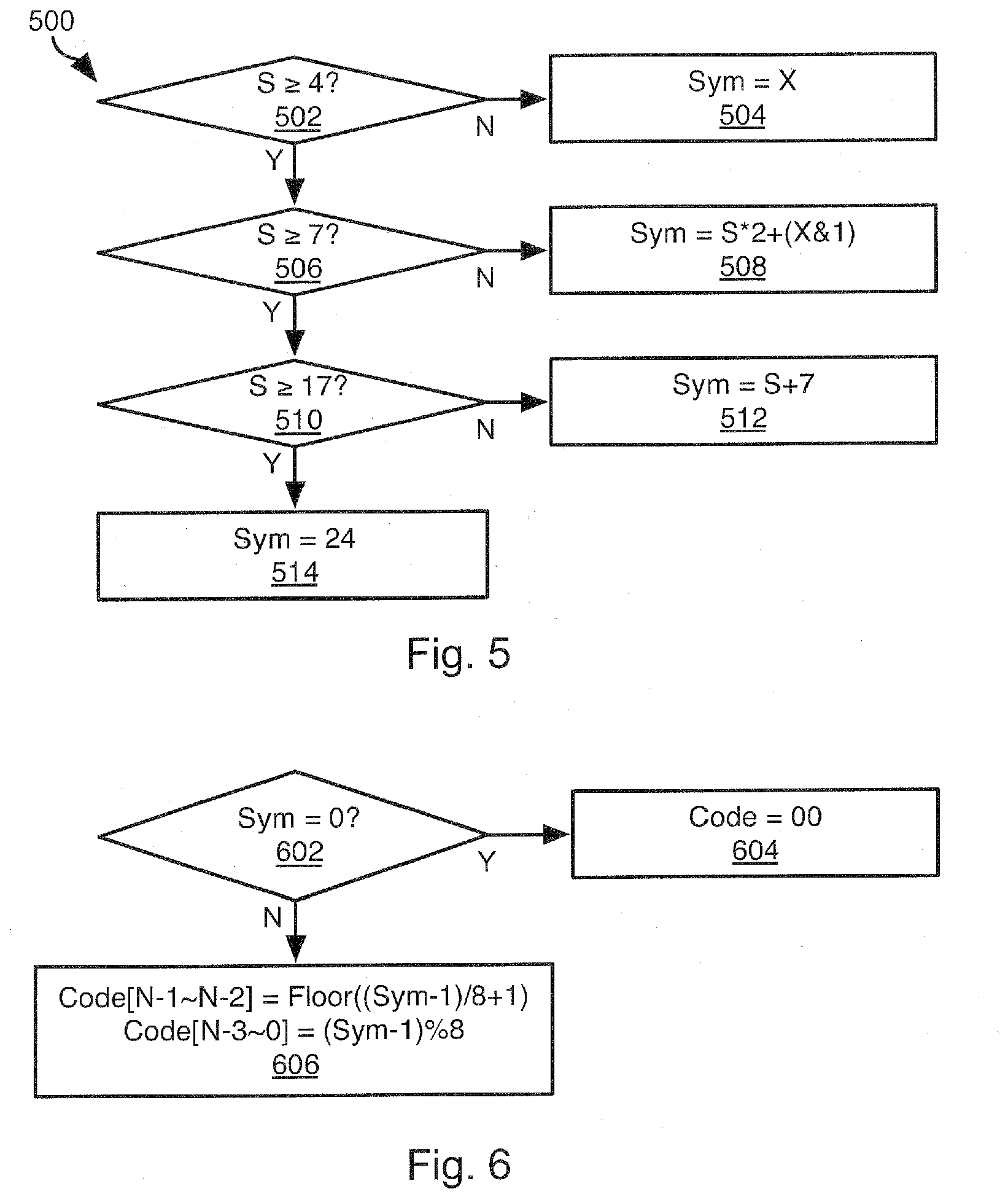 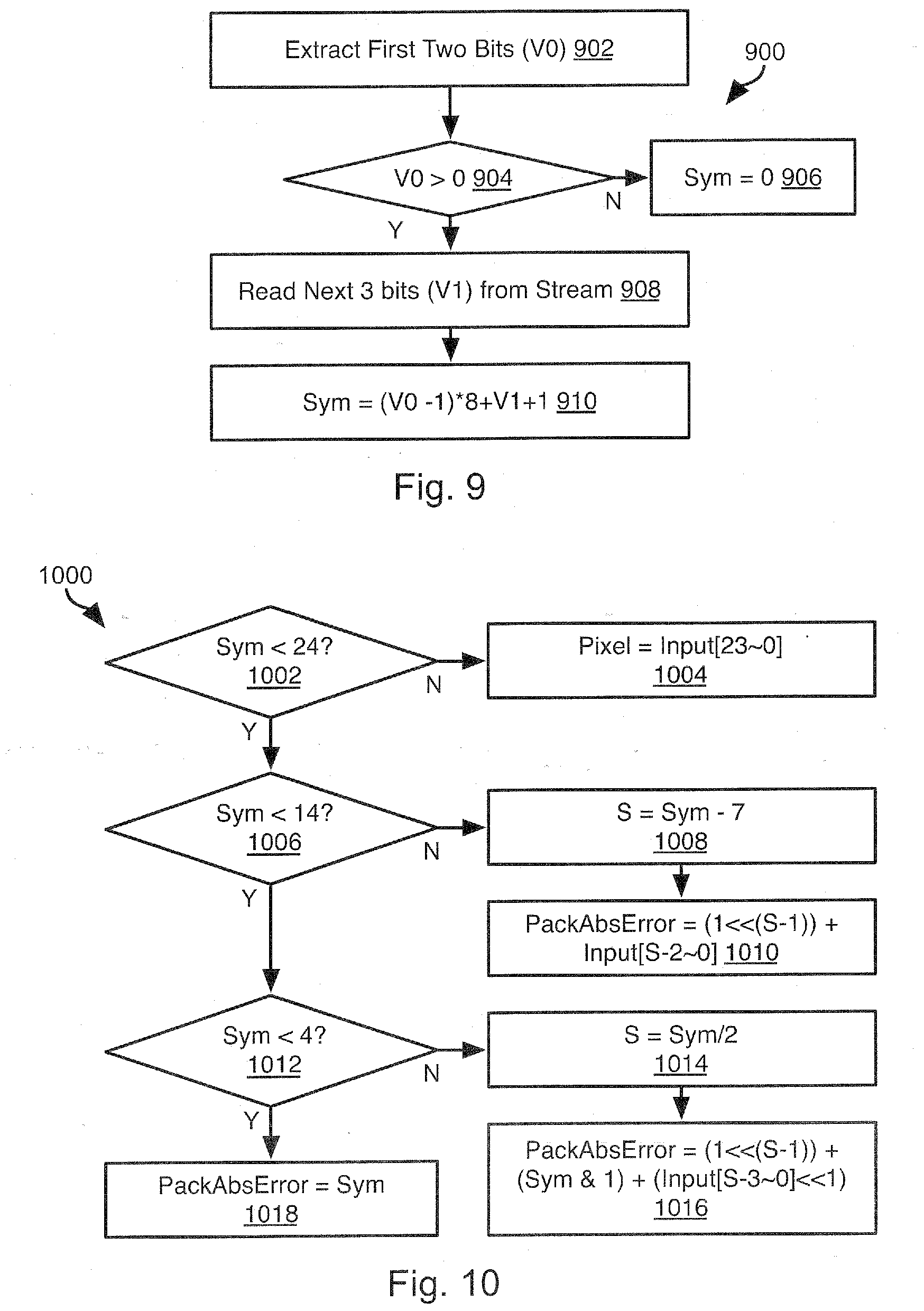