[0002] Fiber laser systems including Ytterbium ("Yb"), Erbium ("Er") and other rare-earth ions doped fibers are highly efficient, cost-effective, compact and rugged light generating and light amplifying devices. Among these, Yb and Er fiber laser systems dominate the industrial fiber laser market mainly due to its excellent efficiency and long term stability.
[0003] Pump sources emitting light in a 976 nm range are of particular interest for a variety of industrial applications including, but not limited to pumping of high power Yb and Er fiber device with peak absorption at about 974-976 nm depending on a dopant composition of the fiber's core. The efficiency of fiber devices at the desired wavelength improves with higher pump light absorption and higher inversion population. For Yb fiber laser devices having more than one spectral gain region, the absorption is particularly important. With higher levels of absorption, the overall length of the doped fiber becomes shorter which, in turn, leads to higher thresholds for nonlinearities. The latter are key to limiting deleterious non-linear effects affecting power scaling of fiber lasers and amplifiers. Therefore, pumping Yb doped fibers at wavelengths as close as possible to the peak absorption at about 975 nm provides for shorter fiber lengths and, therefore, higher thresholds for non-linearities.
[0004] The existing pumps emitting light at about 975 nm may be divided into two groups: SM light sources and MM light sources. SM light sources include typically laser diodes emitting high quality beams at low powers, whereas MM sources, also including laser diodes, can generate high powers but low brightness and, therefore, low quality beams. The inferior brightness of input light substantially worsens its absorption.
[0005] Accordingly, efficient Yb fiber laser devices at about 976 nm thus require a highly bright pump light at wavelengths around 976 nm. A highly efficient pump source capable of emitting high brightness light at about 976 nm is disclosed in PCT/US2011/048186 published under WO 2013/025218 A1. The disclosed pump source includes a pump seed signal light, a multimode ("MM") fiber converter emitting very bright pump light at wavelengths around 975 and a single mode ("SM") Yb fiber laser receiving the pump light and operative to emit high power, high brightness SM light at longer wavelengths in a 1015 nm range. The use of the above-discussed system may find certain applications even without SM YB laser in the desired 976 nm range, but in this case a radiation would be in multiple modes. The latter affects the brightness and quality of the output beam at about 976 nm. A laser system comprising pumping of a Yb-doped amplifying fiber with pump light generated from a Nd-doped fiber laser is for example known from US 5530710A and M. Laroche et al., Opt. Lett. 36 (2011) 3909.
[0006] A need therefore exists for pump sources with high power, ultra-high brightness SM outputs in about 976 nm range.
[0007] A further need exists for a high power fiber laser system, utilizing a pump source which emits an ultra-bright and high power SM pump light at about 976 nm.

SUMMARY OF THE DISCLOSURE

[0008] These needs are met by the disclosed pump source for fiber lasers doped with Yb rare earth ions and having peak absorption in a 976 nm range as defined in independent claim 1. Preferred embodiments are defined in the dependent claims. The disclosed pump source is configured to output a diffraction limited, ultra-bright beam at kW power levels and includes a sub-pump unit and a SM Yb fiber laser emitting high power, ultra-bright pump light at about 976 nm.
[0009] In accordance with one aspect of the disclosure, the sub-pump unit is configured to generate high brightness sub-pump light coupled into the SM Yb fiber laser. The unit has a plurality of MM laser diodes which output sub-pump light at a relatively short wavelength, and a MM Nd doped fiber wavelength converter of the sub-pump light wavelength to an amplified and converted sub-pump output at a longer wavelength. The use of multiple MM sub-pump laser diodes contributes to high power levels at the output of the converter. The latter, being a fiber amplifier, not only amplifies a pump signal light from a pump seed source, but because of high power sub-pump light, it also substantially increases the brightness of the pump signal light.
[0010] In accordance with a further aspect of the disclosure, the SM Yb laser of the pump source is configured to efficiently absorb the sub-pump light due to the geometry of the Yb-doped active fiber which provides for a high ratio between core and clad diameters allowing high-brightness sub-pump light to be efficiently absorbed. As a result, the output of the SM Yb fiber laser, which is a pump output in the desired 976 nm range, is even brighter than that one of the sub-pump light.

[0011] The above and other aspects, features and advantages of the disclosed device will become more readily apparent from the following specific description accompanied by the drawings, in which:

FIG. 2 illustrates one of possible configurations of a MM Nd wavelength converter of the pump source of FIG. 1.

FIGs. 3 and 4 illustrate respective cross-sections of initial and final configurations, respectively, of the Nd wavelength converter taken along lines I-I in FIG. 2.

FIG. 5 illustrates one of possible embodiments of a SM Yb-fiber laser of the pump source shown in FIG. 1.

[0012] Reference will now be made in detail to several embodiments of the disclosure that are illustrated in the accompanying drawings. Wherever possible, same or similar reference numerals are used in the drawings and the description to refer to the same or like parts or steps. The drawings are in simplified form and are not to precise scale.
[0013] Referring to FIG. 1, a pump source 10 is configured, among others, with a pump seed source or a plurality of seed sources 12 emitting a seed signal in a 900 - 940 nm range, with a wavelength about 915-920 nm being preferable. The seed signal is further coupled into a sub-pump unit including a MM wavelength converter 14 which is a fiber amplifier configured with a Nd-doped MM fiber and operative to convert emission of sub-pump laser diodes 18 at 800-810 nm to a sub-pump emission at about 915-920 nm. A SM Yb fiber laser 16 provided with a resonant cavity, which is defined between fiber gratings FGs, and receiving the converted and amplified sub-pump emission, completes the configuration of pump source 10. As disclosed hereinbelow, pump source 10 is operative to emit an ultra-bright, high power SM pump light at the wavelength in a 976 nm range which is further coupled into a fiber laser or amplifier 20 having peak absorption at about 976 nm and doped with Yb, Er or Yb/Er ions.
[0014] The pump seed source 12 is configured with one or combined together MM pigtailed laser diodes emitting a sub-pump signal light at the desired wavelength, for example, at about 920 nm. As one of ordinary skill in the laser arts knows, laser diodes output a relatively spike-less, i.e., smooth and low-noise signal. Typically, a noise level, measured in root-mean-square (r.m.s.) units, is about 0.1 r.m.s, whereas a numerical aperture ("NA") of the sub-pump signal light typically ranges between about 0.1 and 0.13. The output power of the signal light may vary between tens and hundreds of watts. While a semiconductor structure of seed 12 is preferable due to a relatively smooth output, alternatively, it may also have a fiber configuration. The signal light is further coupled into a passive MM fiber 22 guiding it further along a light path to MM Nd wavelength converter 14 where the signal is amplified and its brightness is increased at least in ten times.
[0015] The use of fibers, such as a MM Nd-doped fiber of wavelength converter 14, dramatically increases the light brightness as explained hereinbelow. The brightness B may be determined as

at least one seed source (12) generating a low-noise signal light at a first wavelength;

a plurality of sub-pump multimode laser diodes (18) combined together to emit a sub-pump light at a second wavelength shorter than the first wavelength, and

a noise level substantially identical to that one of the low-noise signal light,

an output power substantially equal to nPd, wherein Pd is a power of each sub-pump laser diode (18), and n is the number thereof; and

a single mode Yb fiber oscillator (16) receiving the amplified signal light and having peak emission at a third wavelengths around 976 nm. 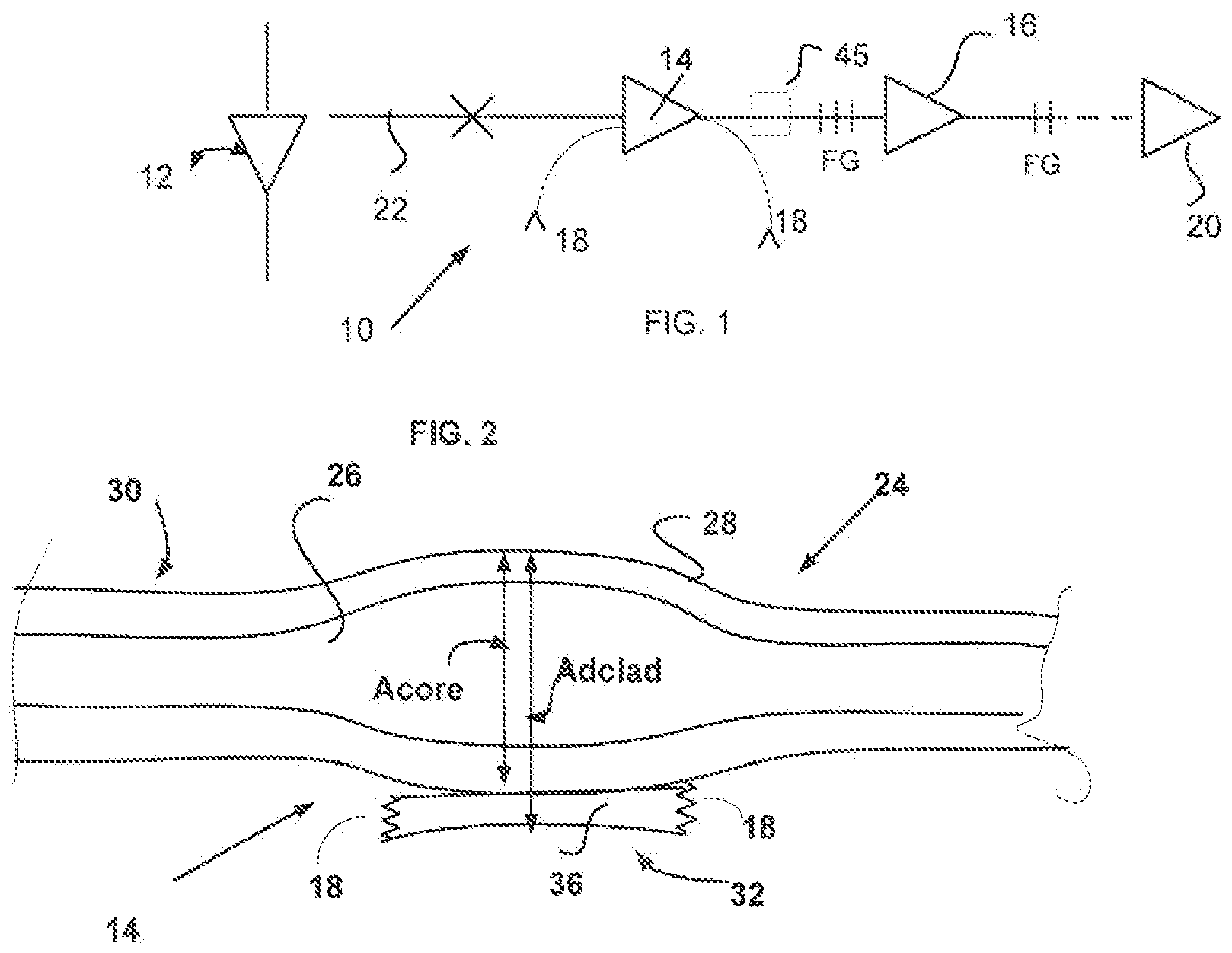 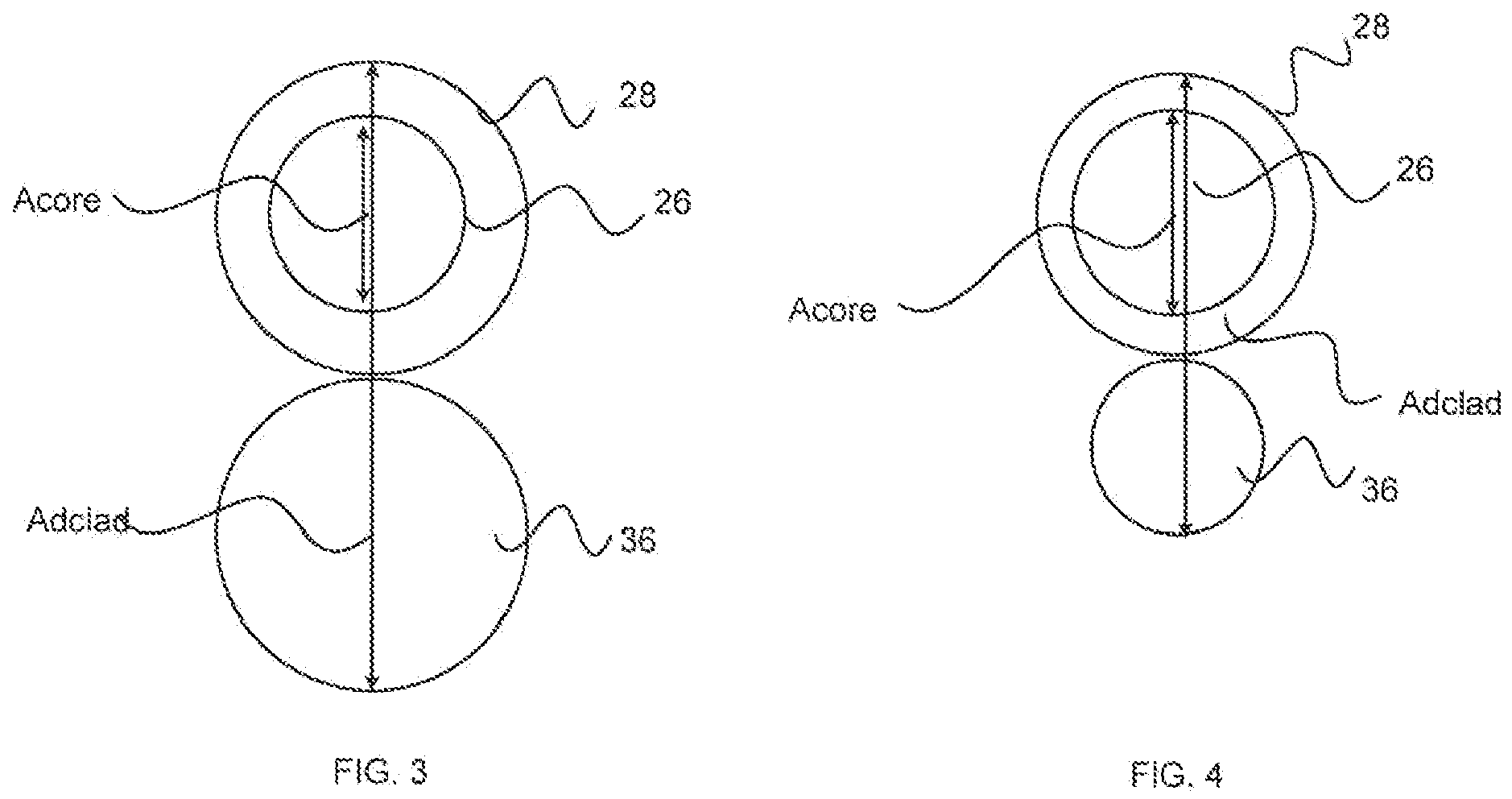 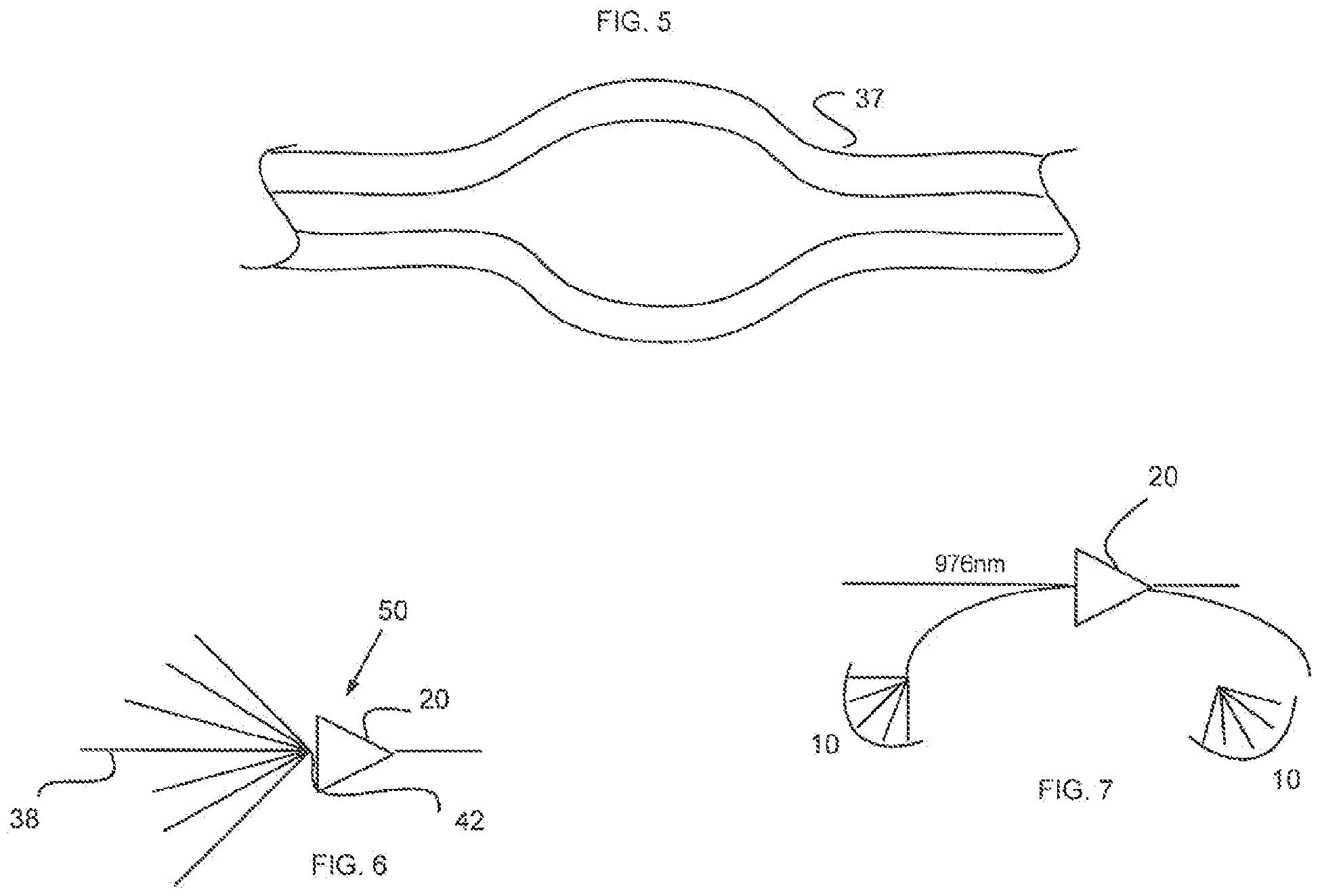