[0001] The following disclosure relates generally to wireless communication, and more specifically to managing remote access for devices in a mixed access point environment.

[0002] Wireless communication systems are widely deployed to provide various types of communication (e.g., voice, data, multimedia services, etc.) to multiple users. Subscription based services allow users to access and utilize various communication content over a service provider's network. As the demand for high-rate and multimedia data services rapidly grows, there lies a challenge to implement efficient and robust communication systems with enhanced performance.
[0003] Traditional fixed line communication systems, such as digital subscriber line (DSL), cable line, dial-up, or like network access technologies offered by Internet service providers (ISPs), are alternative and sometimes competing communication platforms to wireless communications. However, in recent years users have begun replacing fixed line communications with mobile communications. Several advantages of mobile communication systems, such as user mobility, small relative size of user equipment (UE), and ready access to public switched telephone networks as well as the Internet, have made such systems very convenient and thus very popular. As users have begun relying more on mobile systems for communication services traditionally obtained through fixed line systems, demand for increased bandwidth, reliable service, high voice quality and low prices has heightened.
[0004] In addition to mobile phone networks currently in place, a new class of small base stations has emerged. These small base stations are low power and can typically utilize fixed line communications to connect with a mobile operator's core network. In addition, these base stations can be distributed for personal/private use in a home, office, apartment, private recreational facility, and so on, to provide indoor/outdoor wireless coverage to mobile units. These personal base stations are generally known as access point base stations, or, alternatively, as home Node B units (HNBs) or Femto cells. Femto cell base stations offer a new paradigm in mobile network connectivity, allowing direct subscriber control of mobile network access and access quality. WO 2007/040449 A1 discloses methods and apparatus that provide access control to a femto radio base station of a radio access network. "Mobility Management Identifiers in EPS Entities" (Vodafone et al.), 3GPP TSG CT WG1 Meeting #48 Vienna, Vol. C1-071669 discusses how and where UE maintaining lists can be maintained in the core network and the UE.

Fig. 1 illustrates a block diagram of an example wireless communication environment according to aspects of the subject disclosure.

Fig. 2 illustrates a block diagram of a sample wireless network comprising Femto cell base stations (BSs) according to other aspects.

Fig. 3 depicts a block diagram of a sample system for provisioning a user terminal (UT) with a system determination list (SDL) for Femto cell acquisition.

Fig. 4 illustrates a block diagram of an example system that facilitates selective BS acquisition based on capabilities of a UT.

Fig. 5 depicts a block diagram of a sample system that employs distributed access point management for a UT.

Fig. 6 illustrates a block diagram of an example system that utilizes a bootstrap configuration to provision a UT according to some aspects disclosed herein.

Fig. 8 depicts a block diagram of an example customized SDL that facilitates GEO-specific access point management according to some aspects.

Fig. 9 illustrates a block diagram of an example system comprising a Femto BS communicatively coupled with one or more UTs according to some aspects.

Fig. 10 depicts a block diagram of a sample system comprising a Femto-capable UT communicatively coupled with one or more BSs.

Fig. 11 illustrates a flowchart of an example methodology for providing centralized access point management in a mobile environment.

Fig. 12 illustrates a flowchart of an example methodology for obtaining UT-specific information to generate a customized SDL according to some aspects.

Fig. 13 depicts a flowchart of a sample methodology for employing a custom SDL to access a mobile network.

Fig. 14 depicts a flowchart of an example methodology for providing distributed access point management in a mobile environment.

Fig. 15 illustrates a flowchart of an example methodology for interfacing with a Femto cell to generate an SDL customized for a particular UT.

Fig. 16 illustrates a flowchart of a sample methodology for employing a custom SDL to select preferred access points to a mobile network.

Fig. 18 illustrates a block diagram of an example system that employs a custom SDL to access mobile network BSs.

sending the SDL to the UT; and

2. The method of claim 1, further comprising obtaining bootstrap parameters from the mobile network.

3. The method of claim 1, wherein allowing or denying the network access is based on whether the UT is included in a closed subscriber group, CSG, associated with a network access point coupled to the UT.

4. The method of claim 1, further comprising:

obtaining updated network topology information based on a change in a neighboring access point deployment; and

updating the custom SDL to reflect the change in the neighboring access point deployment.

5. The method of claim 1, further comprising:

6. The method of claim 1 or claim 10,
wherein the first set of access point types includes the Femto cells and the macro cells.

8. An apparatus for facilitating remote access to a mobile network by a network access point (406A, 406B, 802), comprising:

means for sending the SDL to the UT; and

means for allowing or denying network access to the UT,

code means adapted to perform all the steps of any of the method of claims of 1 to 7 and 10-12, when executed by a computer. 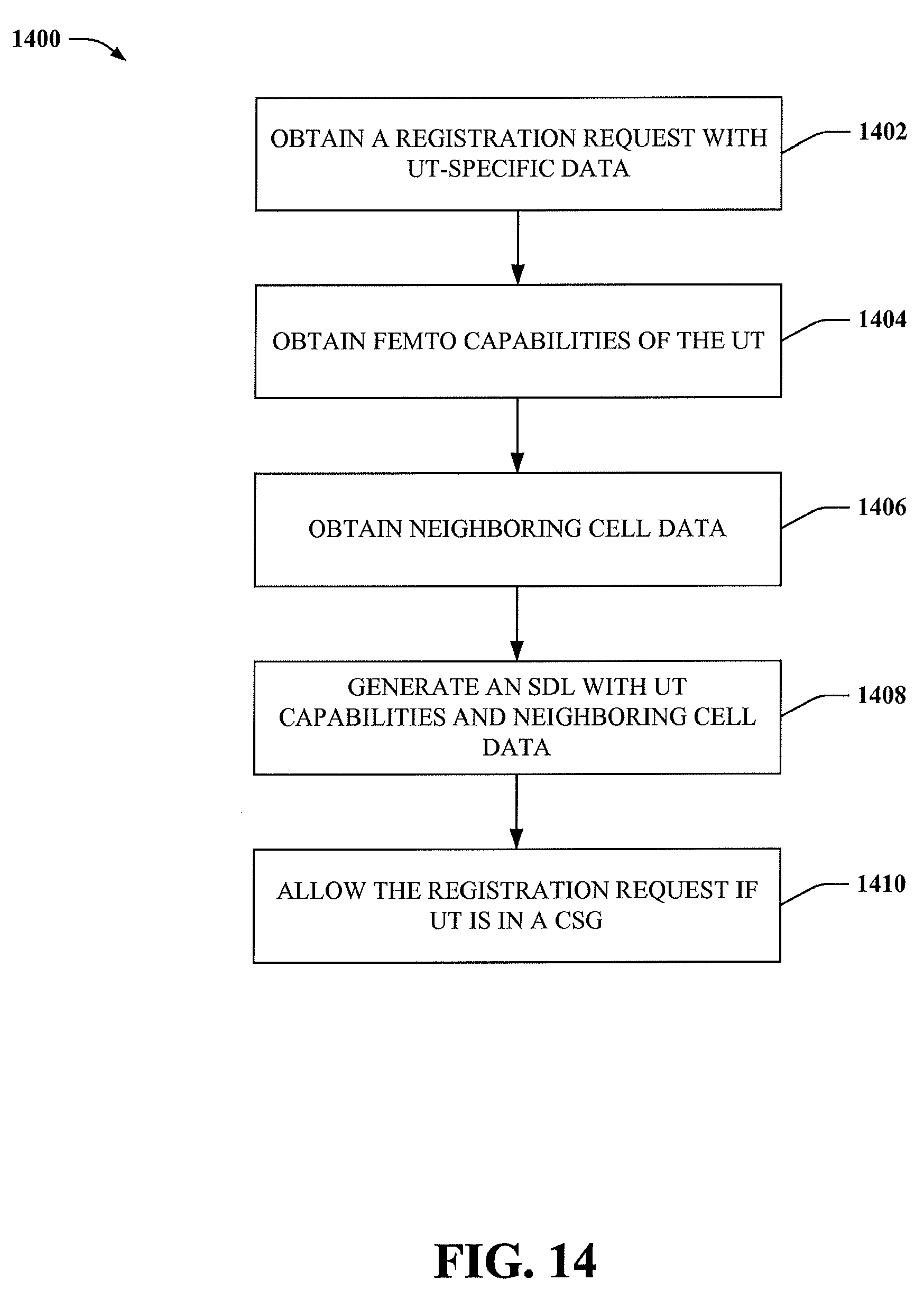 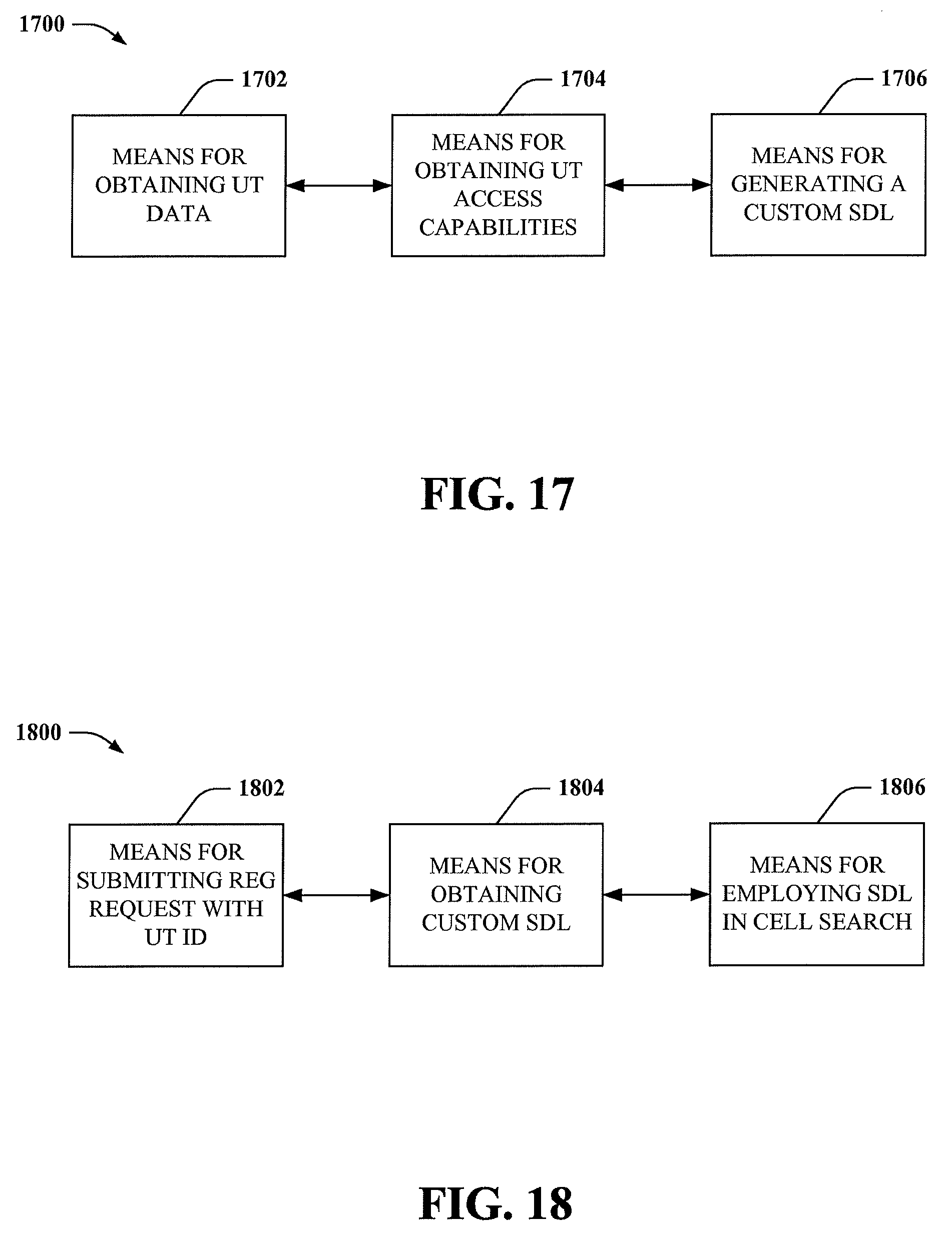