[0001] This invention relates to a treatment composition, system, and method for treating water systems for scale, biofilm and microbial growth, and corrosion. This invention is particularly useful in anthropogenic cooling and chilled water applications, such as cooling towers, and in drain systems, such as floor drains, hospital drains and waterless urinals.

[0019] The system and method of the invention are further described and explained in relation to the following drawings wherein:

FIG. 1 is a side elevation view of one embodiment of a water treatment system according to the invention used with a flowing water system

FIG. 2 is a graphical plot of log reduction in planktonic and sessile bacteria resulting from treatment with maximum concentration treatment composition;

FIG. 3 is a graphical plot of planktonic and sessile bacteria isolated from the cooling tower as a function of time;

FIG. 4 is a graphical plot showing dissolved and suspended copper in the bulk water as a function of time;

FIG. 5 is a graph showing dissolved and suspended copper as a function of time;

FIG. 6 is a graph showing the planktonic and sessile bacterial counts in Example 5.

[0052] Example 1A: Example 1 was repeated again but in this case a commercially available secondary biocide, MB-2128, was added to aid the initial treatments. In this case it was observed that after processing the biofilm and supernatant at the lowest concentration treatment there was a 2 log reduction in the microorganism counts. For the minimum and maximum concentration levels there were no detectable microorganisms recovered from the biofilm or from the supernatant. The results are summarized in Table 2.
TABLE 2 - Recoverable microorganisms at different treatment composition concentrations with a secondary biocide

[0097] Example 10: Treatment of Waterless Urinals. Another study was conducted using the foaming treatment composition to remove and prevent the reoccurrence of biological build up in waterless urinal systems. Prior to adding the treatment composition, the drain plug leading from the urinal to the drain was removed revealing a layer of biological and inorganic deposits at the air-liquid interface. The drain line was filled with the foaming product delivered from an aerosol can with a concentration of active ingredients 0.01 M sodium citrate, 0.005 M citric Acid, and 0.0015 M didecyldimethyl ammonium chloride. The treatment was allowed to react for 5 minutes after which the foam was rinsed with water and a conventional sealer was added. The control urinals had the drain line brushed and conventional sealer added. The first week after treatment there were no visible changes in the condition of the sealer or odor control blocks. The second week, the untreated urinals started to show signs that the odor control systems were breaking down. The urinals to which the foaming treatment composition was applied had fully functional odor control systems and were odor free. After week three, some of the odor control blocks in the untreated urinals started to exhibit biological growth and the sealer was changing color from blue to green, whereas the treated urinals showed little to no biological build up. After 4 weeks the odor control systems in the untreated urinals had broken down completely, while the treated urinals were still fully operational and exhibited controlled odors.
[0098] In additional to the previous results, the results of these drain and urinal examples are summarized as follows: (1) the foaming treatment composition is preferred for use in cleaning drain systems because it is easier to apply to substantially all contaminated surfaces in drain systems and the physical breaking of the foam helps mechanically remove biological based material from the walls of the drain system; (3) the treatment composition helps eliminate foul odors in drain systems; (4) the treatment composition may extend the lifetime of a clean, unclogged drain, especially in the case of the waterless urinals; (5) the treatment composition is preferably allowed to contact the surfaces of a drain system for 5-120 minutes, but a contact time of around 60 minutes is most preferred; (6) the treatment composition eliminates or minimizes food sources/harborages for invertebrate insects within drain systems; (7) the residual effects of the treatment help prevent biofilm from growing back in drain systems.
[0099] The concentration ranges for neutral salt, acid salt, and surfactant reagents provided herein are based on the quantities of these reagents in the total volume of water in the water system being treated, prior to the addition of any other additives, such as corrosion inhibitors, anti-foaming agents, or any secondary biocide. Such additives may be incorporated into a pre-mixed composition with the neutral salt, acid salt, and surfactant according to an embodiment of the invention and those of ordinary skill in the art will understand and appreciate the corresponding change in concentrations when the additional ingredients are included. References herein to water systems that are not capable of holding a volume of water include systems that are actually capable of holding a volume of water, either as they currently exist or through modification, but for which it is desired for any reason to apply the treatment composition of the invention without plugging the system or otherwise using an shut-off mechanism to hold a volume of water within the system. Additionally, the use of the terms flowing (or circulating) and non-flowing (or non-circulating) to describe water systems is not intended to limit the scope of the invention, as the embodiments of the composition, method, and system may be used with either type of system with modifications described herein or that will be understood by those of ordinary skill in the art.

1. A composition for treating a water system to remediate biofilm, the composition comprising:

wherein the concentrations are of these ingredients when mixed with a volume of water in the water system being treated.

2. The composition according to claim 1 further comprising a corrosion inhibitor and a secondary biocide.

4. The composition according to claim 1 wherein the corrosion inhibitor is in a concentration in the range of about 2 ppm to 17ppm based on the volume of water in the water system being treated; and/or the composition further comprising an anti-foaming agent.

5. The composition according to claim 1 wherein the surfactant has anti-microbial properties.

7. A method of removing biofilm and treating a water system, the method comprising the steps of:

adding a treatment composition as defined in any of the foregoing claims 1 to 6 to the water in the water system ; and

contacting the water containing the treatment composition with components of the water system for period of time.

8. The method of claim 7 further comprising the steps of:

adding a corrosion inhibitor and a secondary biocide to the water in the water system; and

contacting the water containing the corrosion inhibitor and secondary biocide with components of the water system for a period of time.

11. The method of claim 10 further comprising the step of filtering the water containing the treatment composition as it circulates through the water system.

13. The method of claim 12 wherein the corrosion inhibitor is added to the water in the water system and allowed to circulate for a period of time prior to adding the treatment composition to the water.

14. A method for treating a water system comprising:

contacting a treatment composition as defined in any of the foregoing claims 1 to 6 with components of the water system for a period of time; and

flushing the treatment composition from the water system. 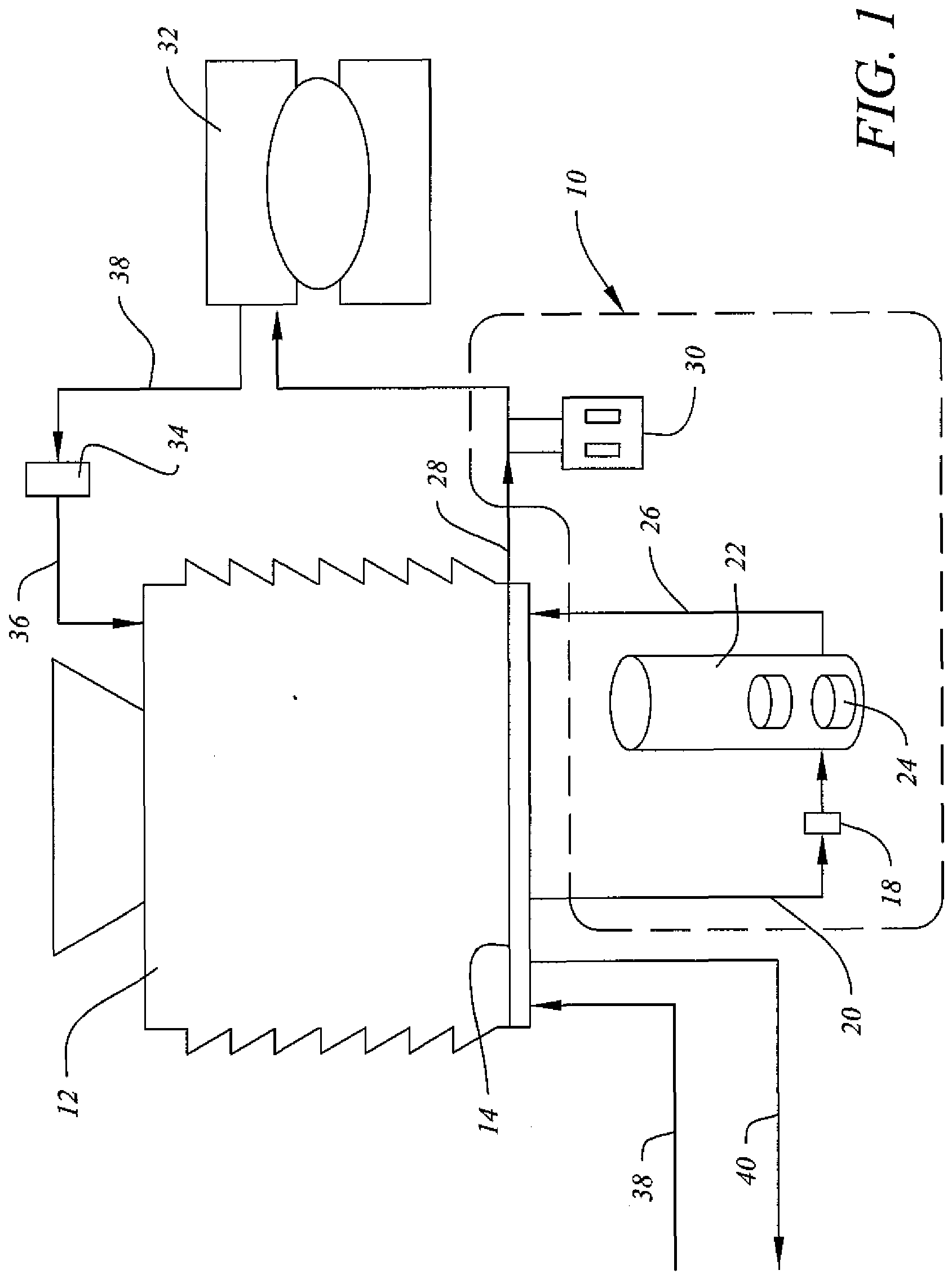 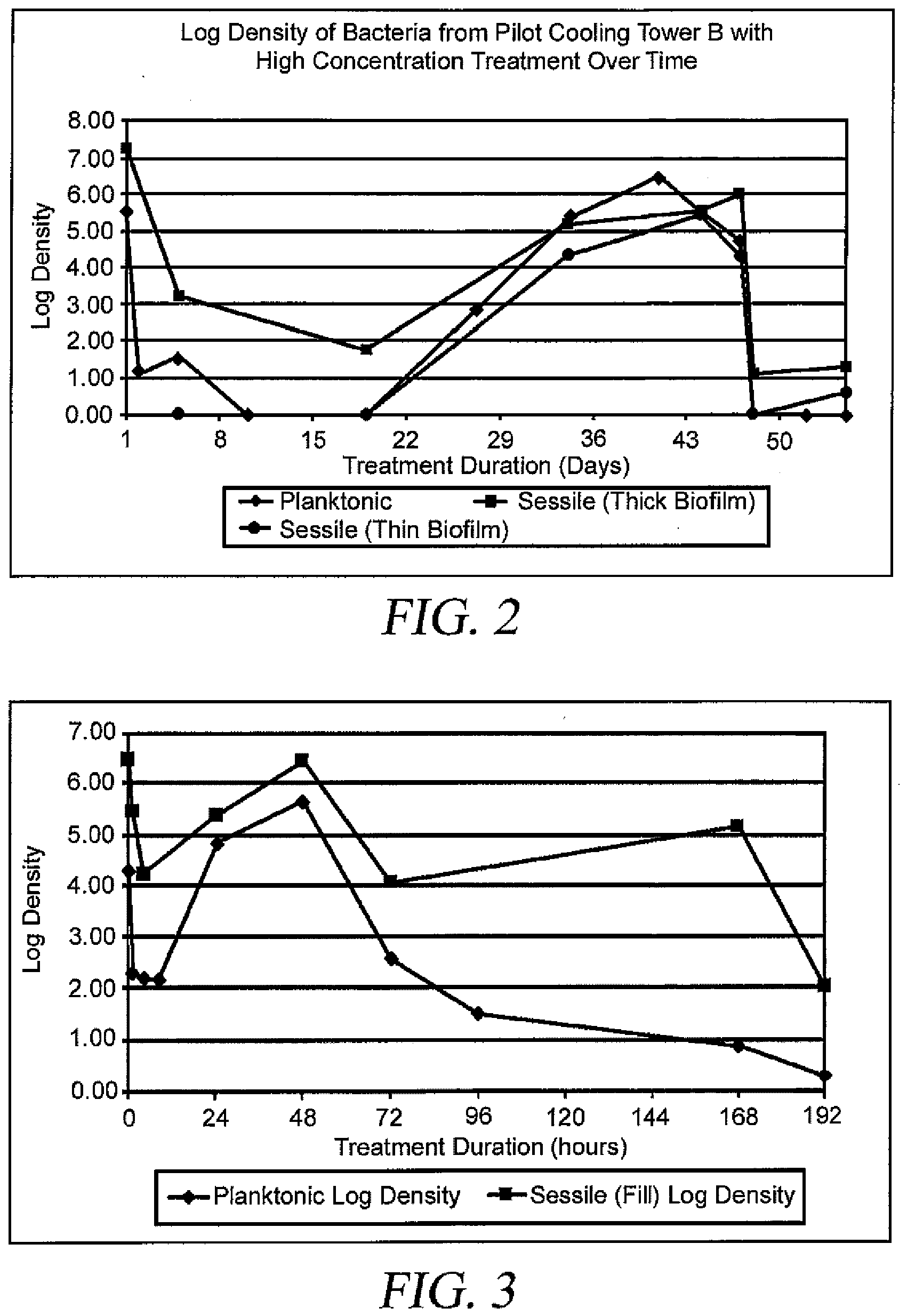 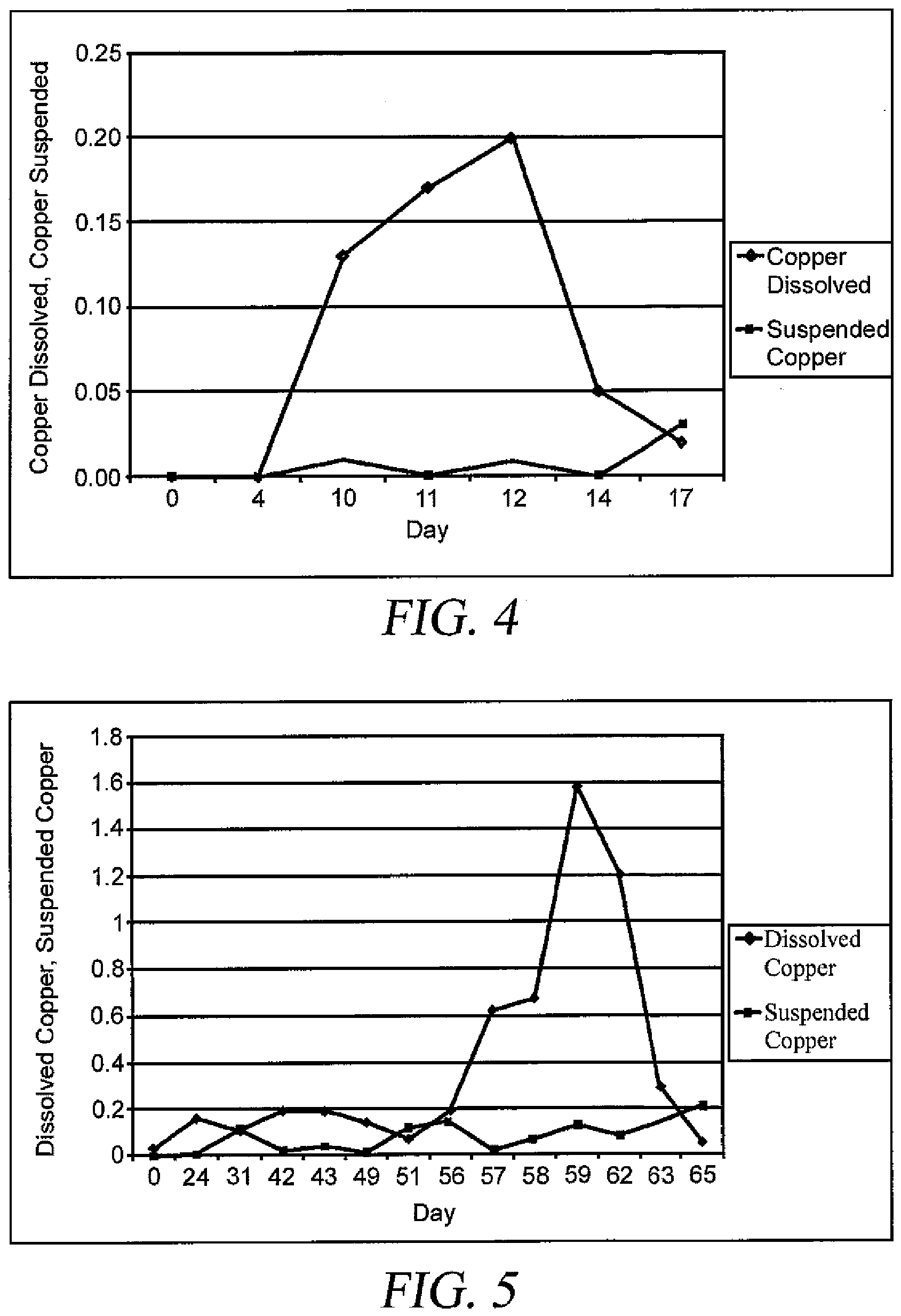 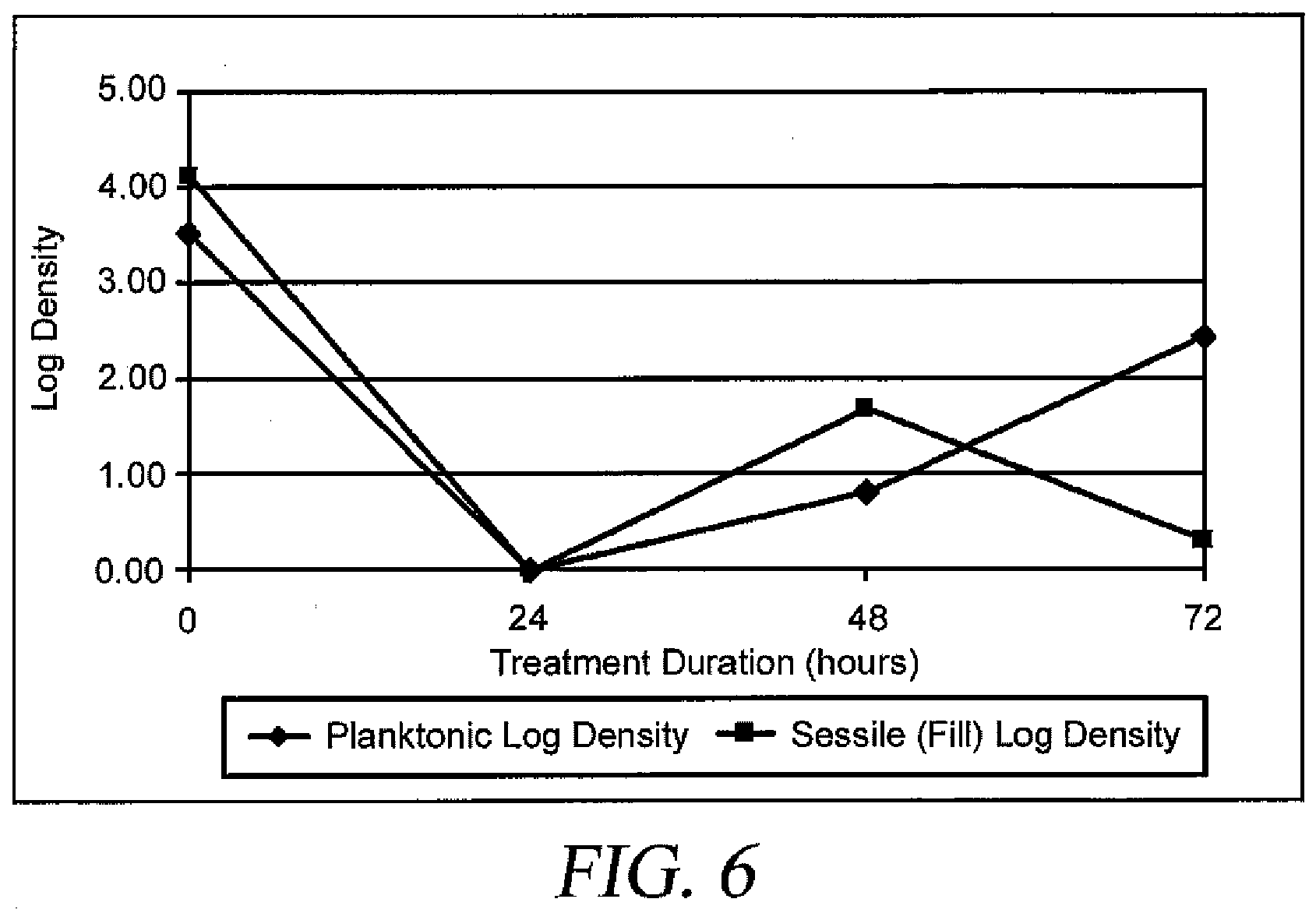