[0002] Air mixing devices such as fans are useful in larger open commercial and industrial building spaces for a variety of reasons. These air mixing devices may be used for recirculating air within the open space defined by the building superstructure (e.g. walls, floor, and ceiling) to provide proper ventilation and reduce vertical temperature stratification of air within the space. This destratifying effect helps maintain a uniform temperature within the structure for optimum comfort of the building occupants and heating/cooling efficiency by circulating warm air which rises and typically occupies the upper elevations with cooler air which sinks and typically occupies the lower elevations within the open space.
[0003] In addition to temperature regulation, air mixing devices also serve an additional useful purpose when the building structure serves as a commercial breeding and rearing facility for animals which occupy the space. In the case of a poultry house, for example, levels of ammonia generated by decaying manure may be higher near the floor than at higher elevations within the building structure. To promote healthy air quality within the confined environment and meet the ventilation requirements of the animals, it is further useful therefore to reduce air stratification within such spaces by creating an air circulation pattern which vertically mixes the air for purposes of maintaining uniform air quality throughout the facility.
[0004] To further promote good air quality, some air mixing devices may draw fresh replacement outside air into the building. During colder months, air mixing devices may sometimes incorporate heat exchanger elements (e.g. electric resistance, steam, or hot water coils) to heat the outside air prior to discharge into to the open building space. This air tempering approach alone, however, increases energy consumption and operating costs. In addition, the heated hot air may be discharged from the air mixing devices at significantly higher temperature than the room air inside the building and at high velocity which may cause uncomfortable drafts and temperature fluctuations at various locations within the facility.
[0005] US 3 760 708 A discloses an air mixing unit disposed in the open space and mounted to a ceiling below an air intake duct, wherein the air mixing unit comprises:

a frame configured for being mounted to the ceiling;

a centrifugal fan supported by the frame for rotational movement, the fan including a rotatable body, a drive shaft defining a vertical rotational axis, the drive shaft received through and mechanically coupled to a tubular hub, a plurality of blades, a top air inlet;

a motor drive operable to rotate the fan;

wherein the air mixing unit's top air inlet is in alignment with the air intake duct,

wherein the plurality of blades extend outward from the vertical rotational axis.

a centrifugal fan supported by the frame for rotational movement, the fan including a rotatable body, a drive shaft defining a vertical rotational axis, the drive shaft received through and mechanically coupled to a tubular hub, a plurality of blades, a top air inlet, and a bottom air inlet;

a motor drive operable to rotate the fan;

wherein the air mixing unit's top air inlet is in alignment with an air intake duct,

wherein the plurality of blades extend outward from the vertical rotational axis. An air mixing device and system is desired for improved air mixing, distribution, and energy efficiency.

[0013] The features of the preferred embodiments will be described with reference to the following drawings where like elements are labeled similarly, and in which:

Fig. 1 is a top perspective view of one embodiment of an air mixing unit according to the invention including a centrifugal fan, mounting frame, and motor drive;

Fig. 3 is a side elevation view thereof;

Fig. 5 is a detailed view of a fan mounting portion of the air mixing unit taken from Fig. 3;

Fig. 6 is a cross-sectional end view through a building structure having an open space with the air mixing unit of Figs. 1-5 mounted therein;

Fig. 7 is a lateral side view thereof;

Fig. 8 is a perspective view of the flanged tubular fan blade hub of Figs. 1-5; and

[0014] All drawings are schematic and are not drawn to scale.

a frame (60) configured for being mounted to a building superstructure; 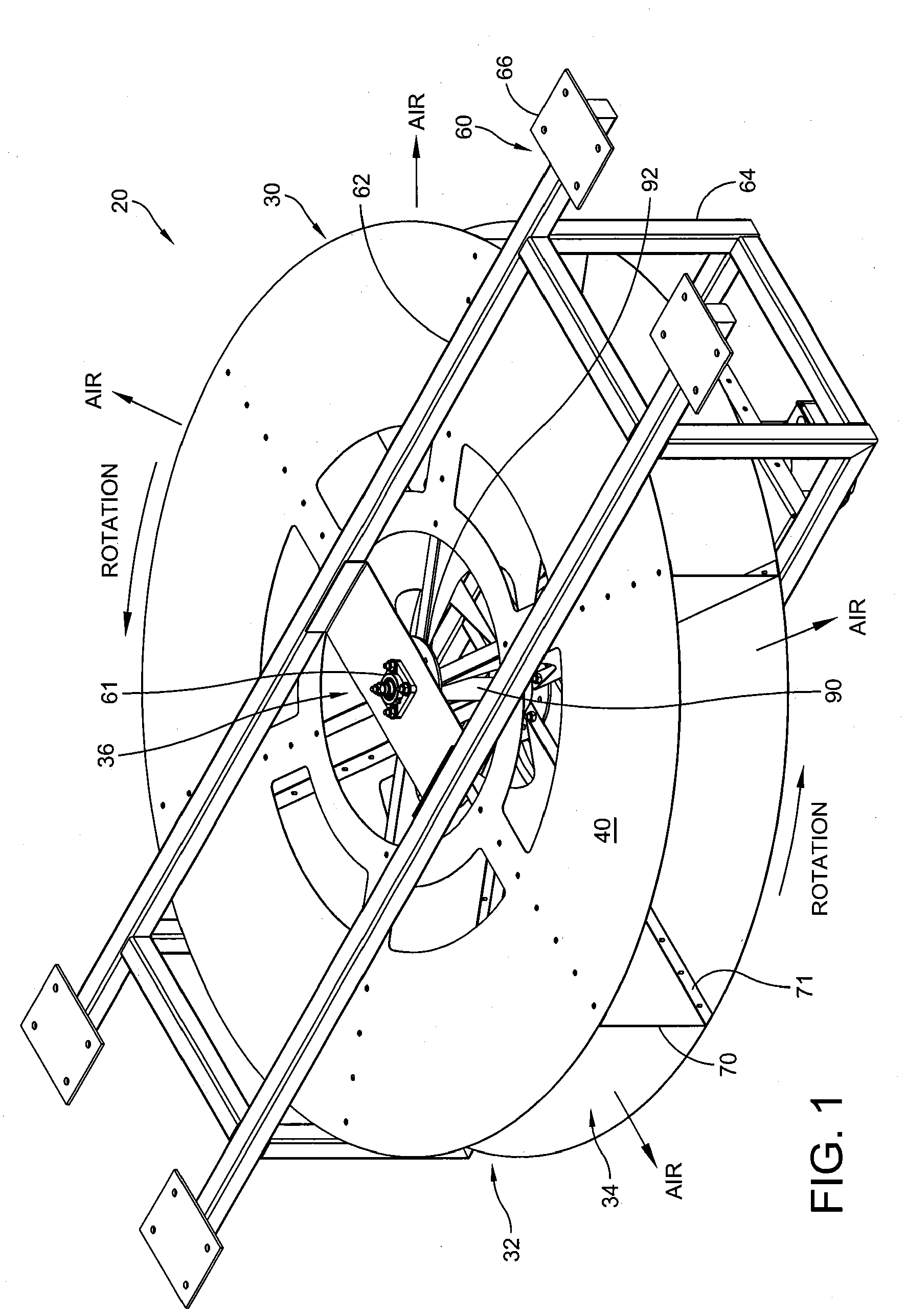 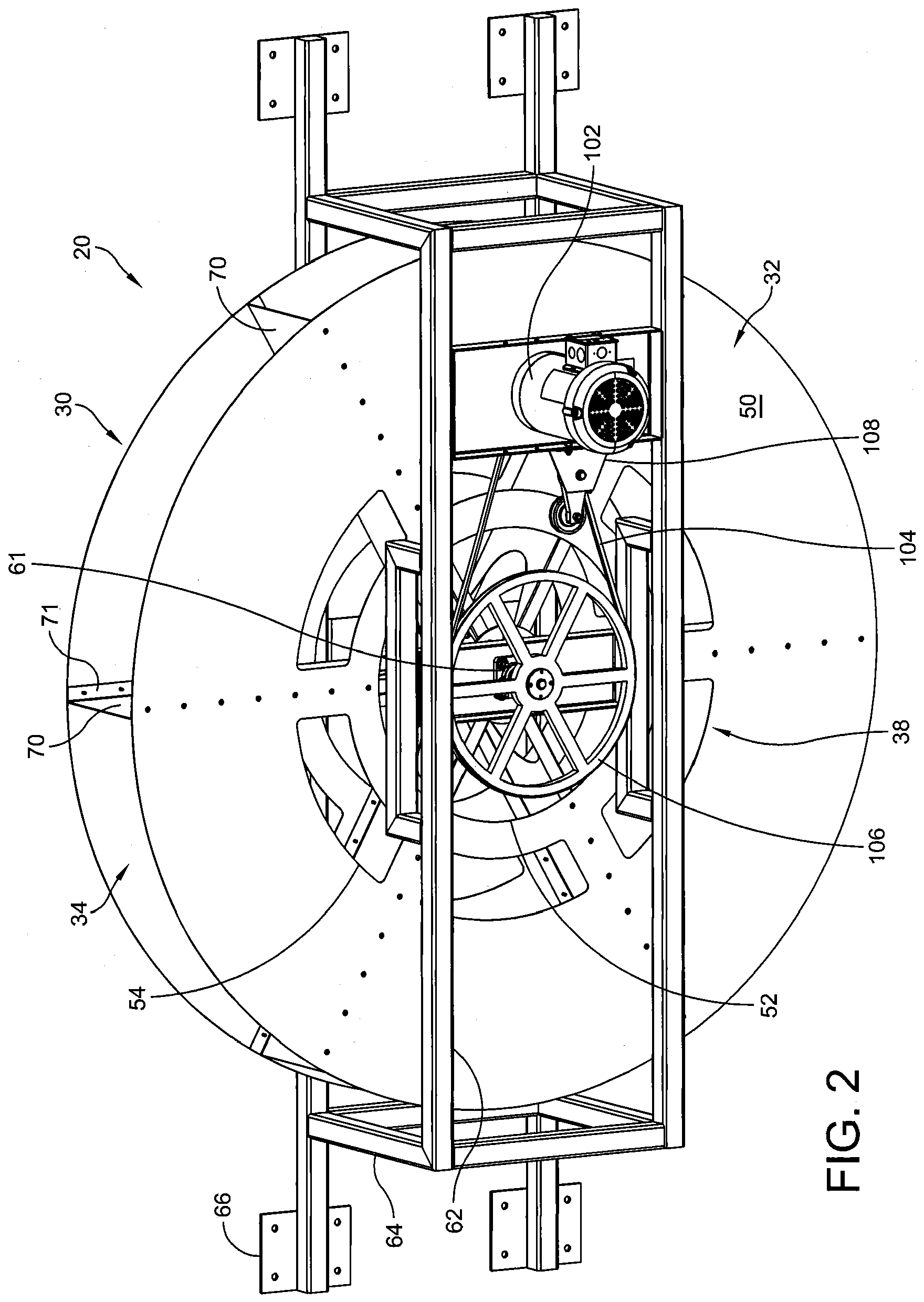 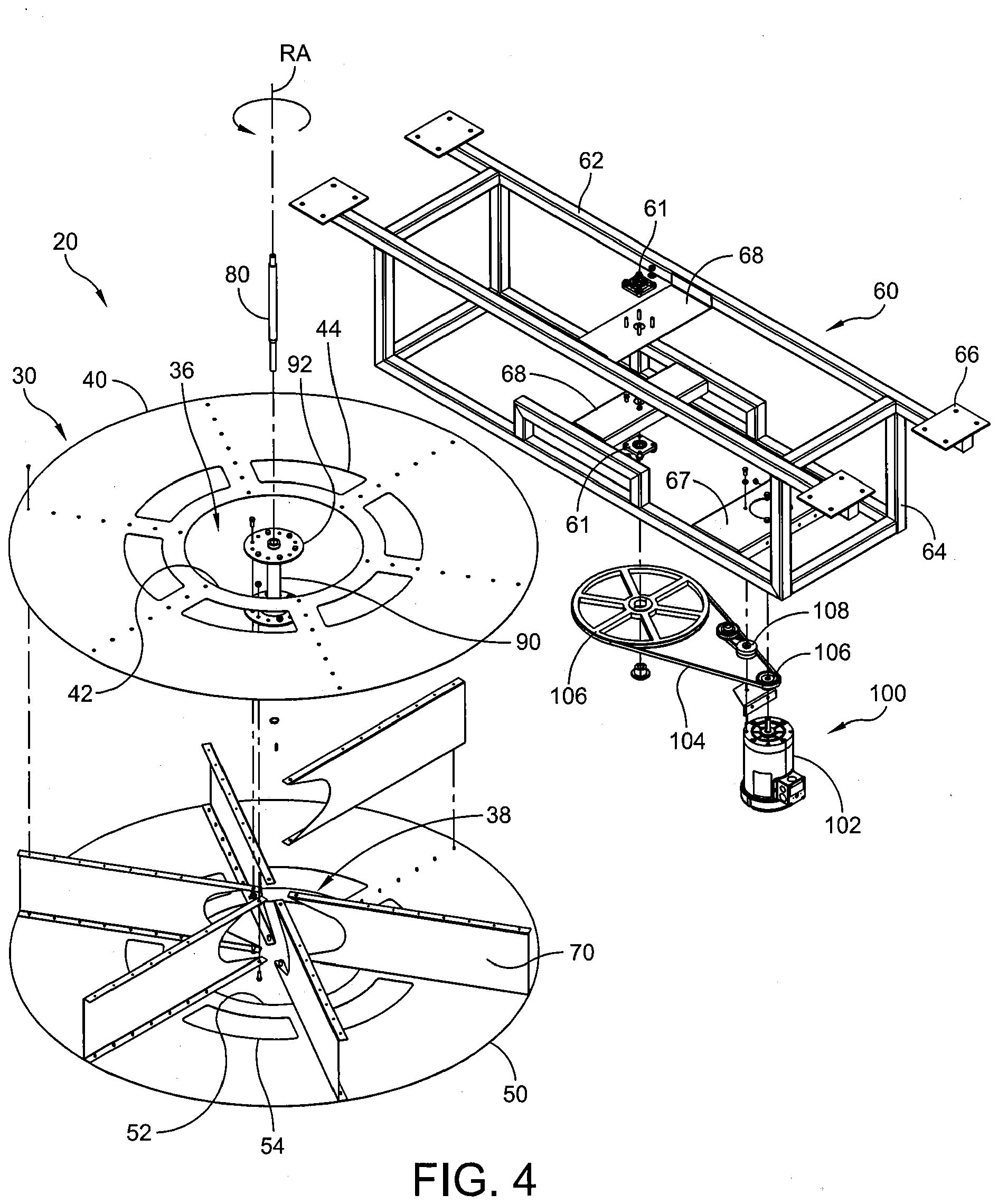 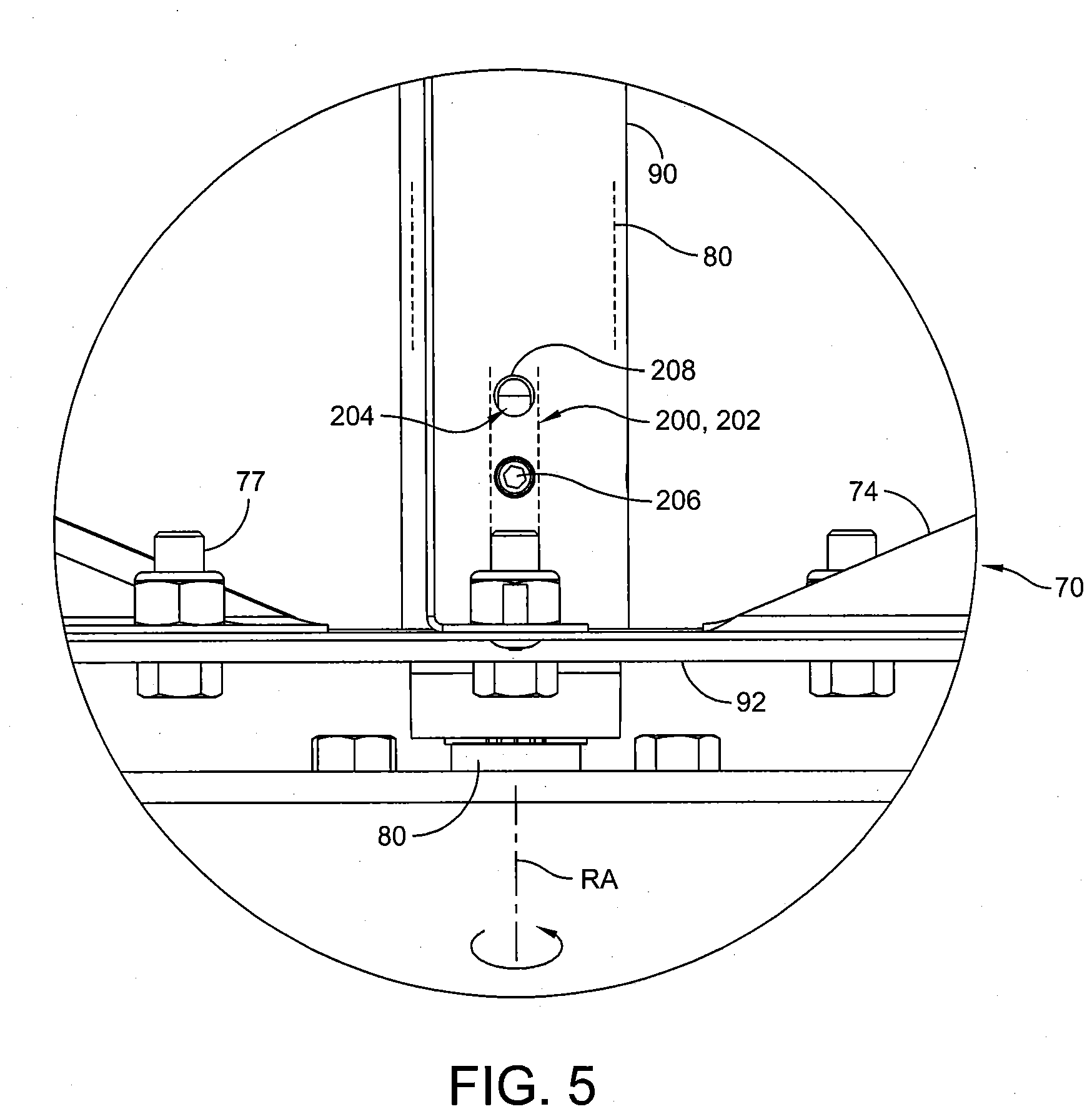 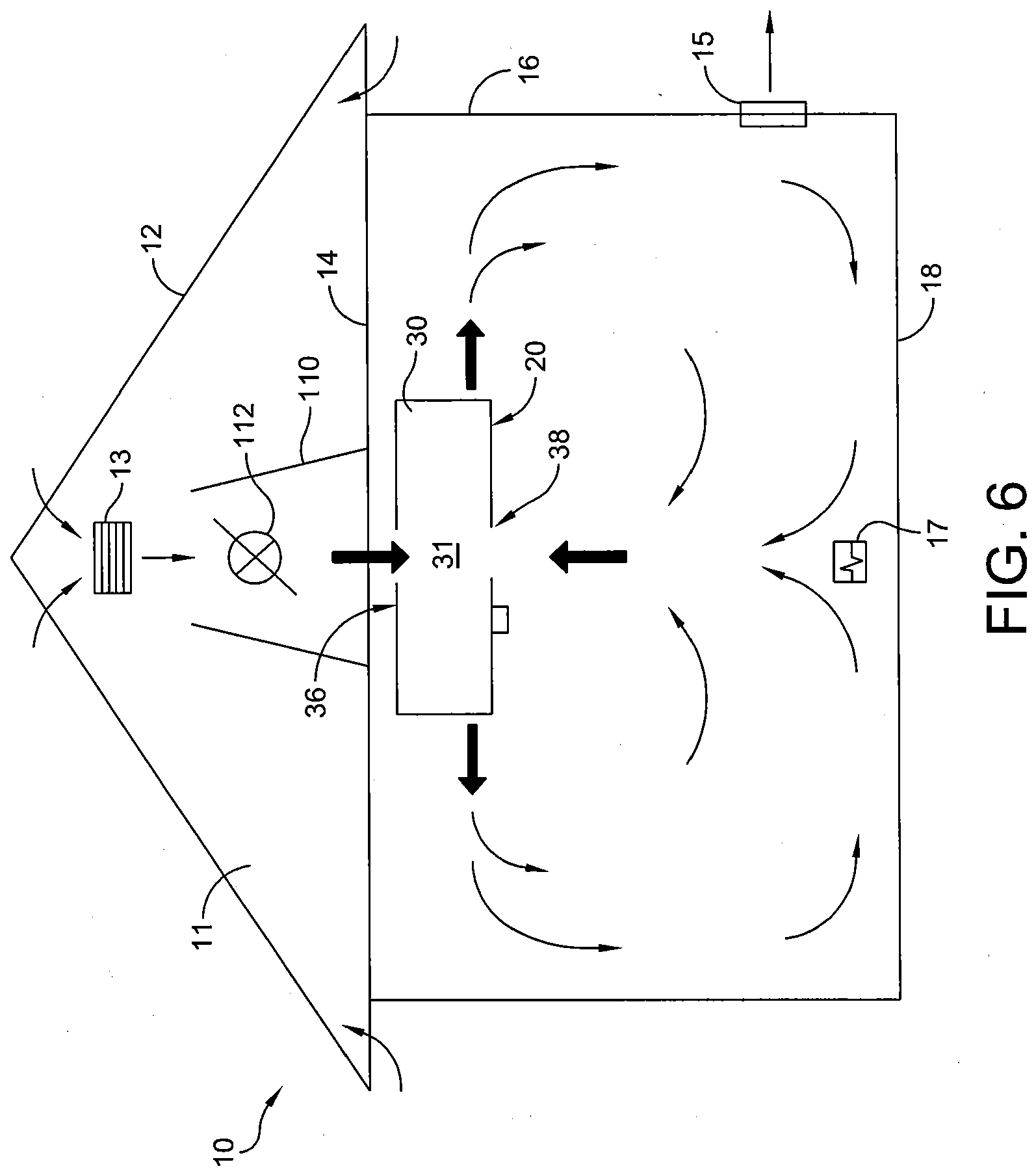 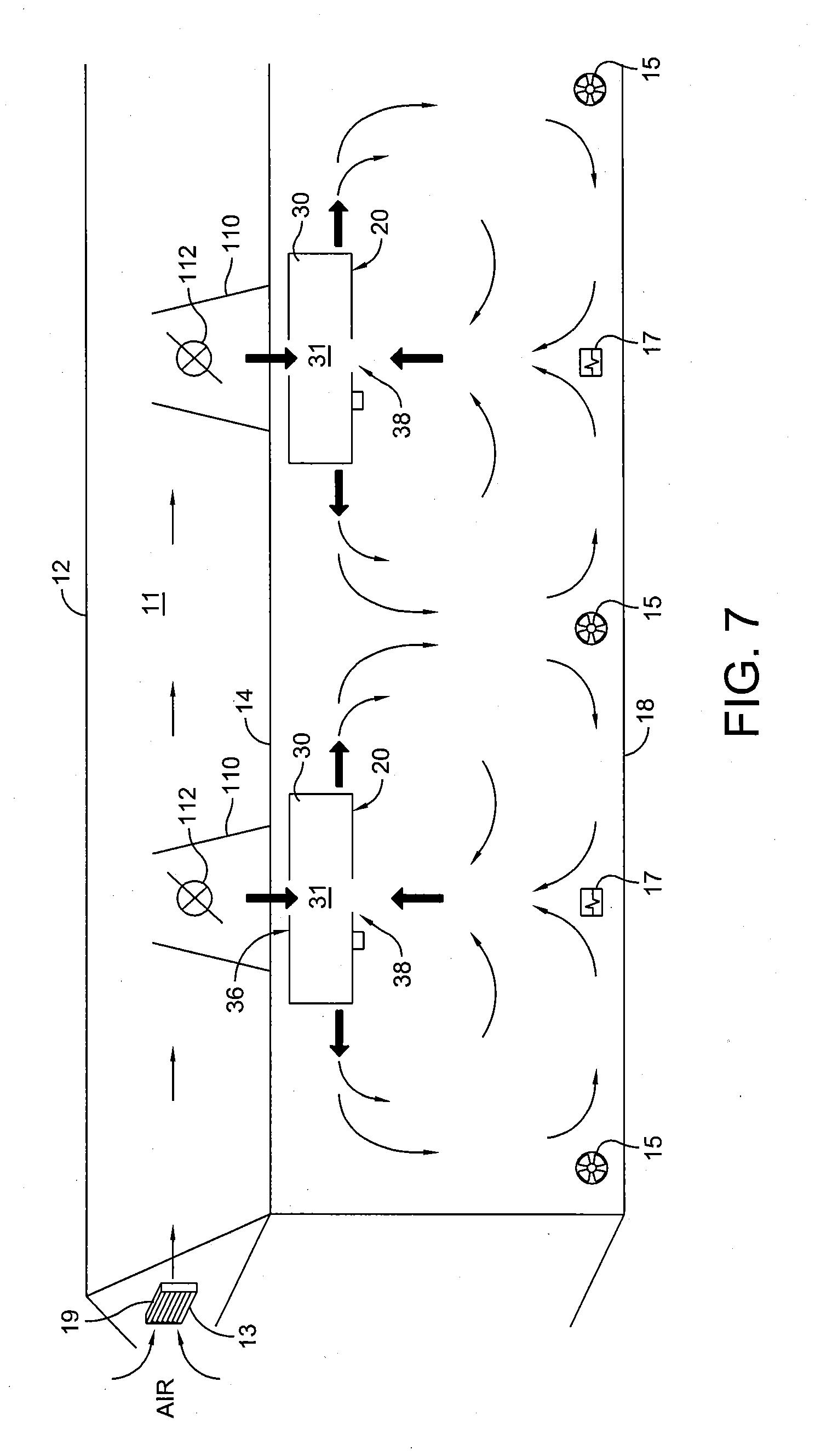 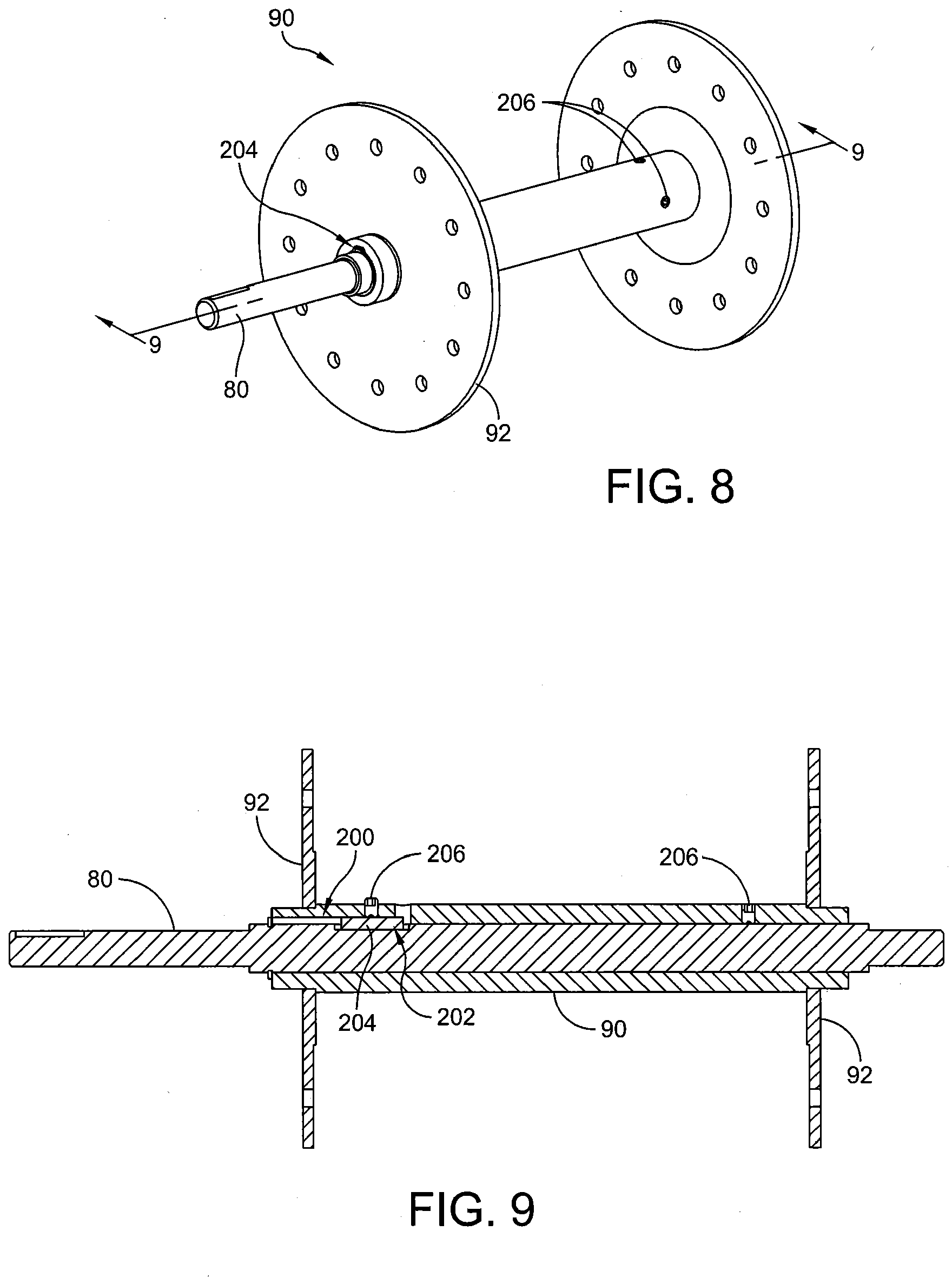