[0001] The present disclosure relates generally to systems for extracting airborne components from air streams, such as in welding, cutting, metal working, wood working, and other applications.
[0002] From JP H01 179 841 A an extractor system as defined in the preamble of claim 1 is known. WO 01/84054 A1 discloses a range hood comprising an adjustment means on top of the hood for adjusting the volume rate of the suction and pressure flow. JP S54 147 647 A refers to an exhaust hood having air volume damping dampers in the suction and pressure flow.
[0003] A wide range of industrial, commercial, hobby and other applications result in airborne components that can be removed with proper extraction and filtering. Metal working operations, for example, range from cutting, welding, soldering, assembly, and other processes that may generate smoke and fumes. In smaller shops it may be convenient simply to open ambient air passages or to use suction or discharge air from fans to maintain air spaces relatively clear. In other applications, cart-type fume extractions are used. In industrial settings, more complex fixed systems may be employed for extracting fumes from specific works cells, metal working locations, and so forth. In other settings, such as machine shops, woodworking shops, worksites where cutting, sanding and other operations are performed, dust, fumes, particulate and other types of airborne components may be generated that it may be desirable to collect and extract from work areas and controlled spaces.
[0004] A number of systems have been developed for fume extraction, and a certain number of these are currently in use. In general, these use suction air to draw fumes and smoke from the immediate vicinity of the metal working operation, and to filter the fumes and smoke before returning the air to the room or blowing the air to an outside space. Further improvements are needed, however, in fume extraction systems. For example, it would be useful to increase the effective ability of the systems to draw the fumes and smoke from the metal working workspace. Moreover, it would be useful to increase the distance and expand the volume over which the fume extractor can effectively remove fumes and smoke.

[0005] The present disclosure provides improvements to extractors designed to respond to such needs. The techniques are based upon the use of a positive airflow in conjunction with a suction airflow that draws airborne components out of the workspace for filtration. The innovations set forth in the disclosure have a number of different facets, and may be used in conjunction with one another to obtain particular synergies and advantages, or separately in some cases. An extractor system according to the present invention is defined in claim 1, and further embodiments are described in the subclaims.

[0006] These and other features, aspects, and advantages of the present disclosure will become better understood when the following detailed description is read with reference to the accompanying drawings in which like characters represent like parts throughout the drawings, wherein:

FIG. 1 is a diagrammatical representation of a fume extractor in accordance with aspects of the present techniques;

FIGS. 1A and 1B illustrate certain presently contemplated variations on the interconnection of components used to provide positive pressure air and draw fumes and smoke from an application;

FIG. 2 is a perspective view of an exemplary implementation of the fume extractor in a cart-like apparatus;

FIGS. 2A and 2B are diagrammatical representations of fixed or semi-fixed installations utilizing the techniques described herein;

FIG. 3 is a perspective view of an exemplary hood for directing positive pressure air flow to an operation and extracting fumes and smoke through an inner shroud;

FIG. 4 is a similar hood provided with manual means for adjusting outgoing air;

FIG. 5 is a similar representation of a further implementation of a hood designed to create a swirling air flow;

FIG. 6 is a further implementation of a hood employing a radial collar to assist in directing positive pressure air flow outwardly from the hood;

FIG. 7 is a diagrammatical section of an exemplary hood illustrating certain dimensions that may be advantageous to provide a degree of adjustability in the provision of air to and withdrawal of air from the hood;

FIG. 8 is an elevational view of a portion of a hood in accordance with certain embodiments of the present techniques;

FIG. 11 is a broken perspective view of a coaxial conduit arrangement for providing positive pressure air flow and suction flow;

FIGS. 12 and 13 are diagrammatical views of certain alternative embodiments that include multiple hoods and/or nozzles;

FIGS. 14 and 15 are diagrammatical views of a currently contemplated extraction cart in accordance with aspects of the present techniques;

FIGS. 16-20 are illustrations of parts of an exemplary manifold and support assembly for an arm of a cart of the type shown in FIGS. 14 and 15;

FIG. 21 is a diagram illustrating generally a comparison of component collection regions with and without the innovations summarized in the present disclosure; and

FIGS. 22 and 23 are vector flow diagrams illustrating the flow of gas to and from the nozzle of the system illustrated in the previous figures.

a base unit (16) comprising at least one blower (22) driven by a motor (24), said base unit being a stand-alone unit or a movable cart;

the base unit (16) comprises control circuitry (26) and

wherein the adjustments may be made at the base unit or via operator controls remotely from the workspace. 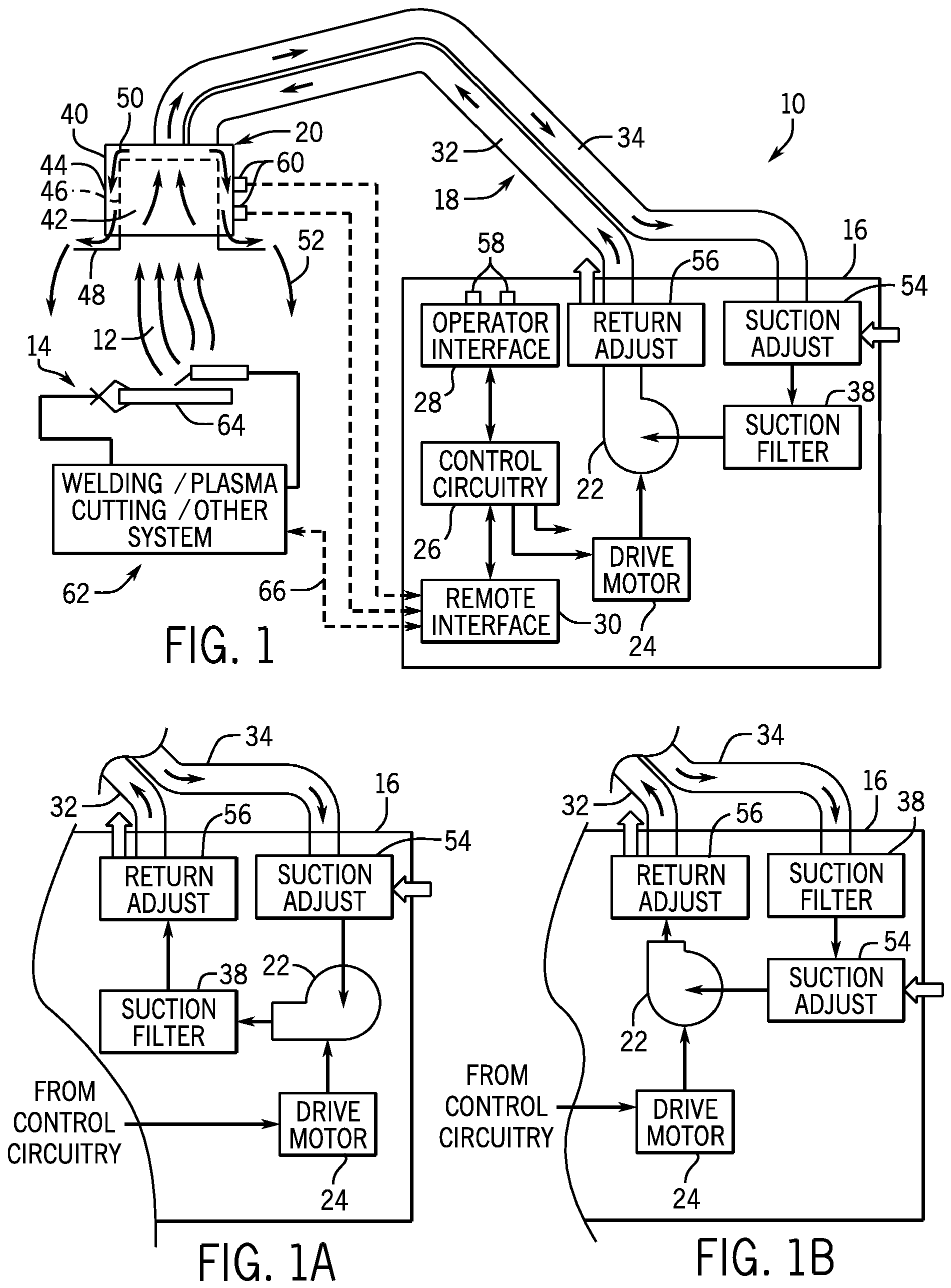 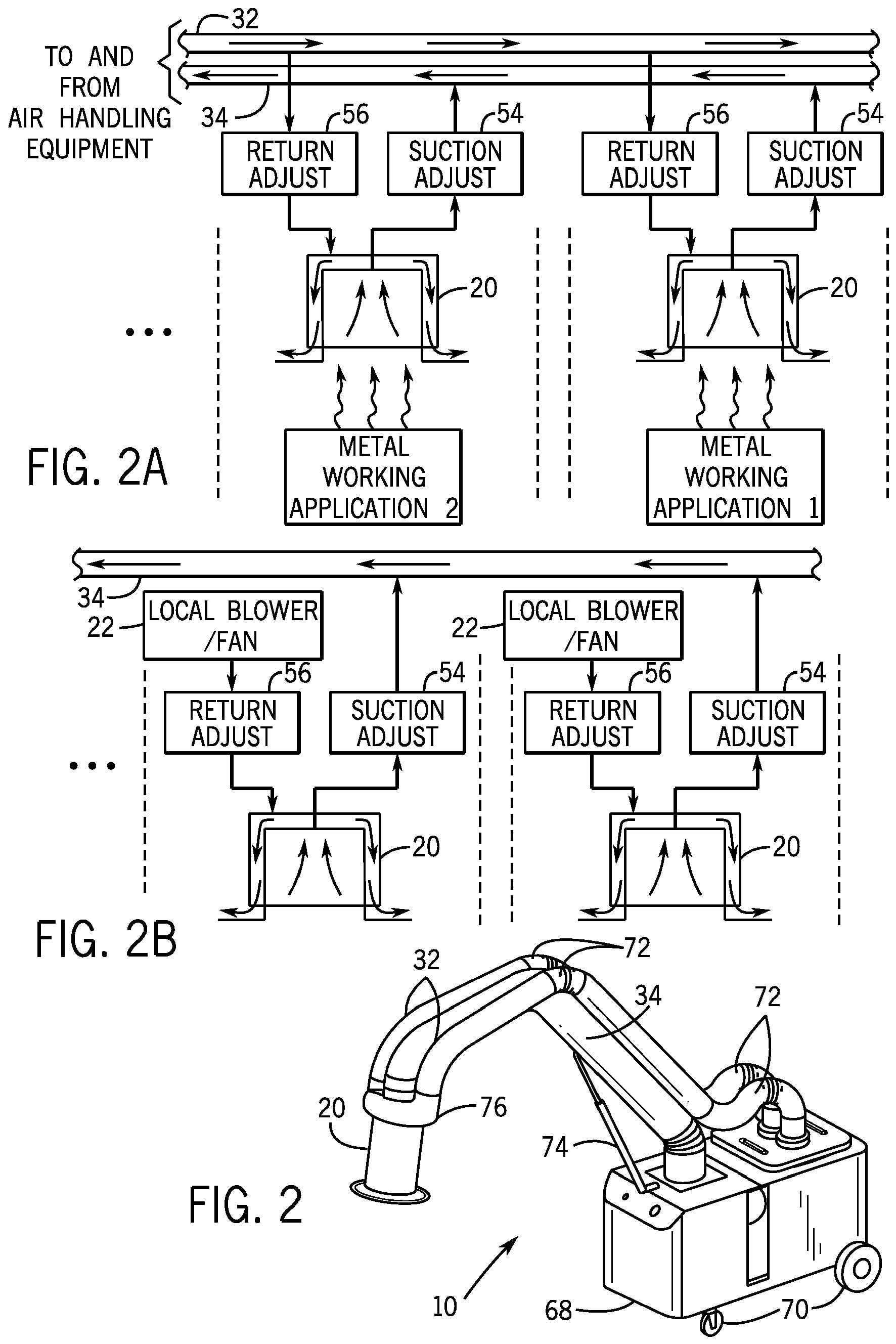 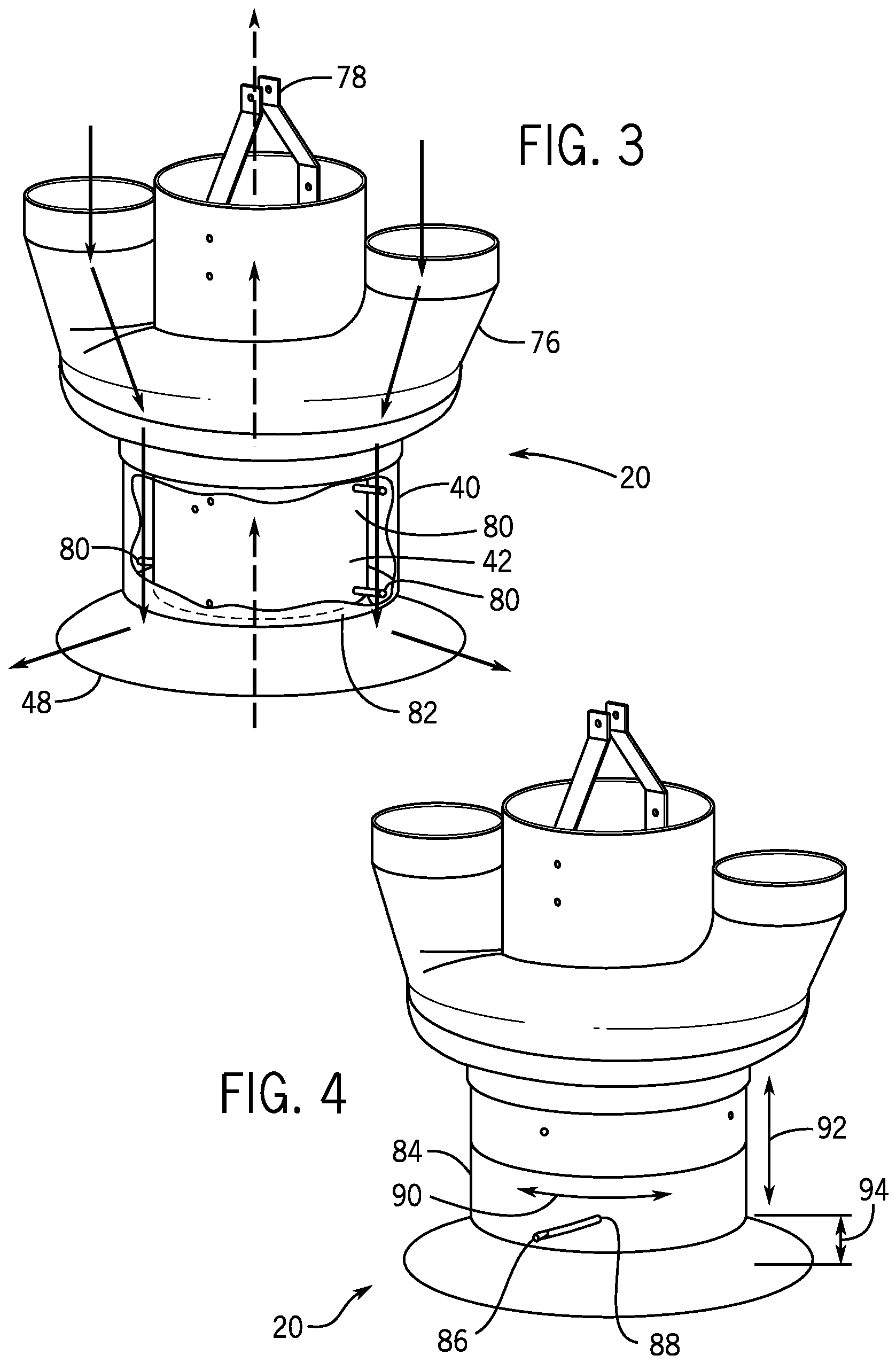 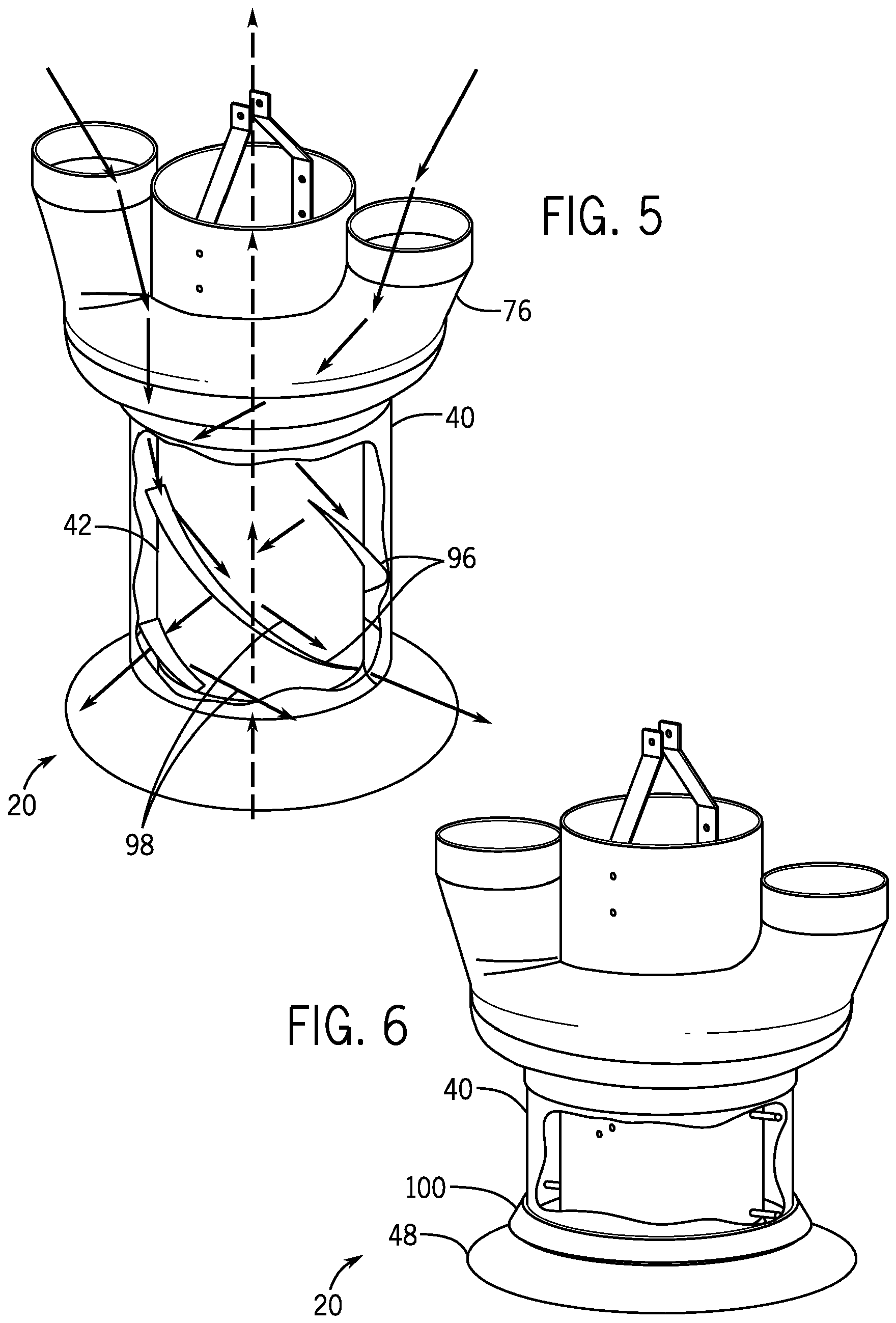 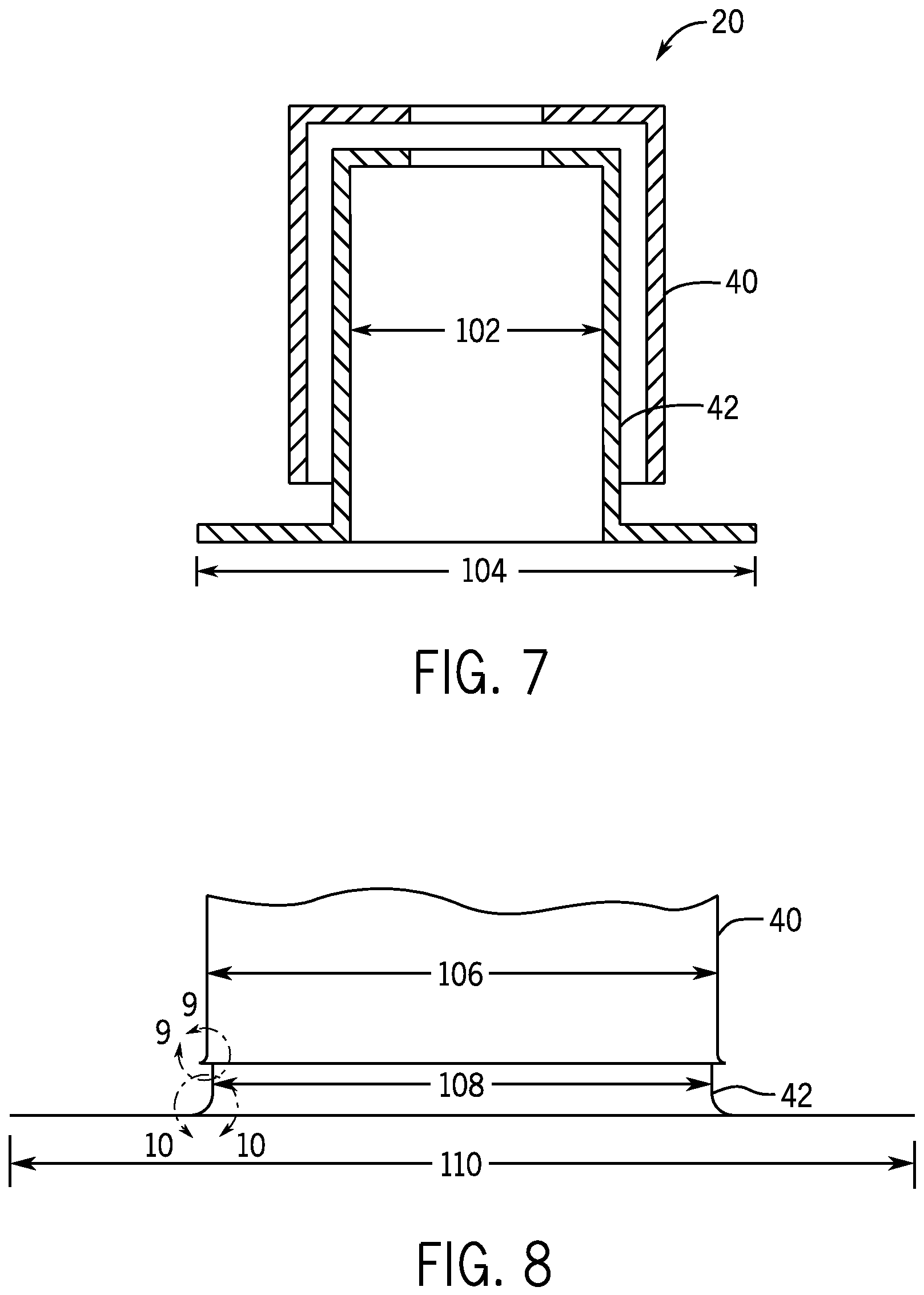 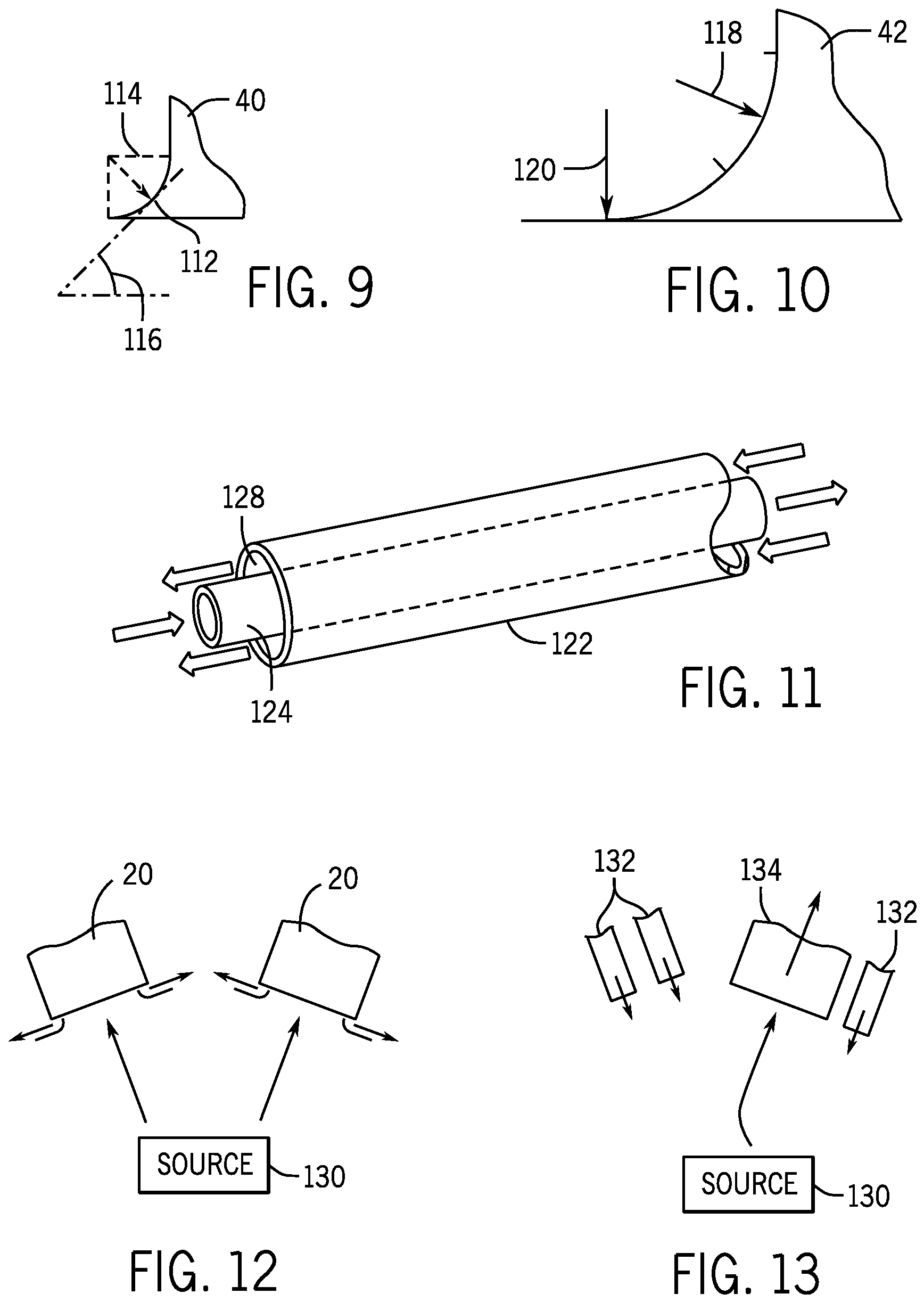 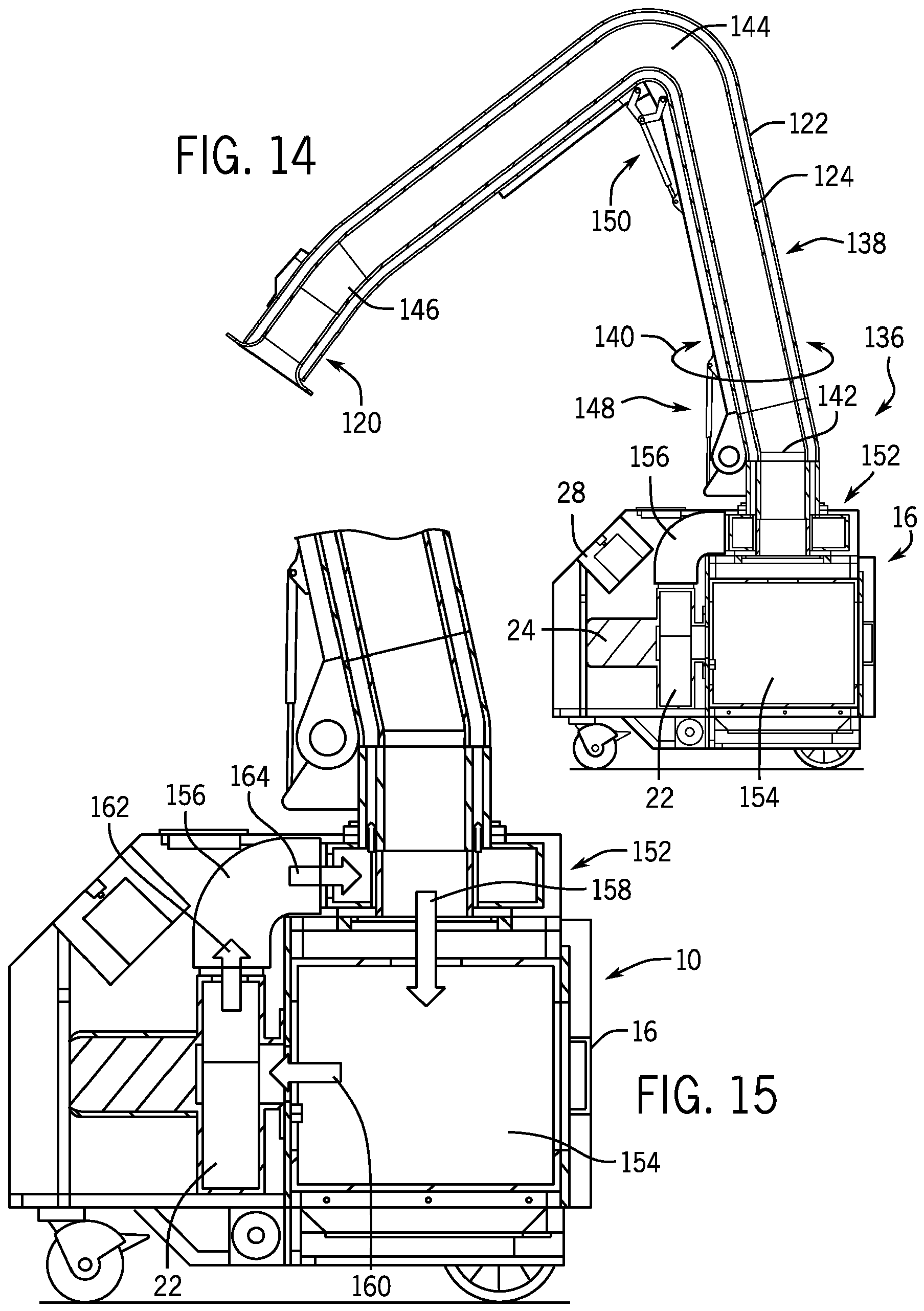 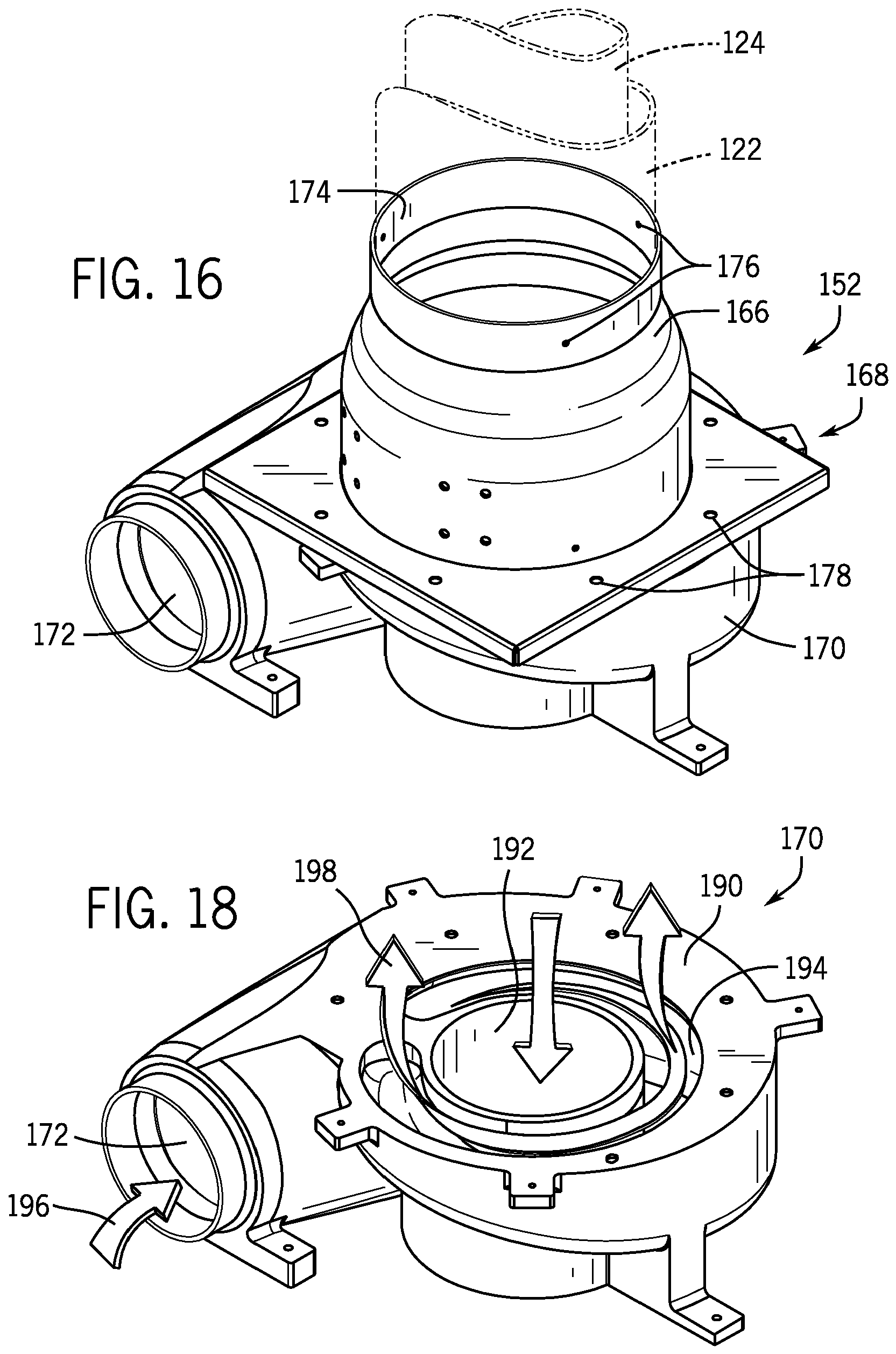 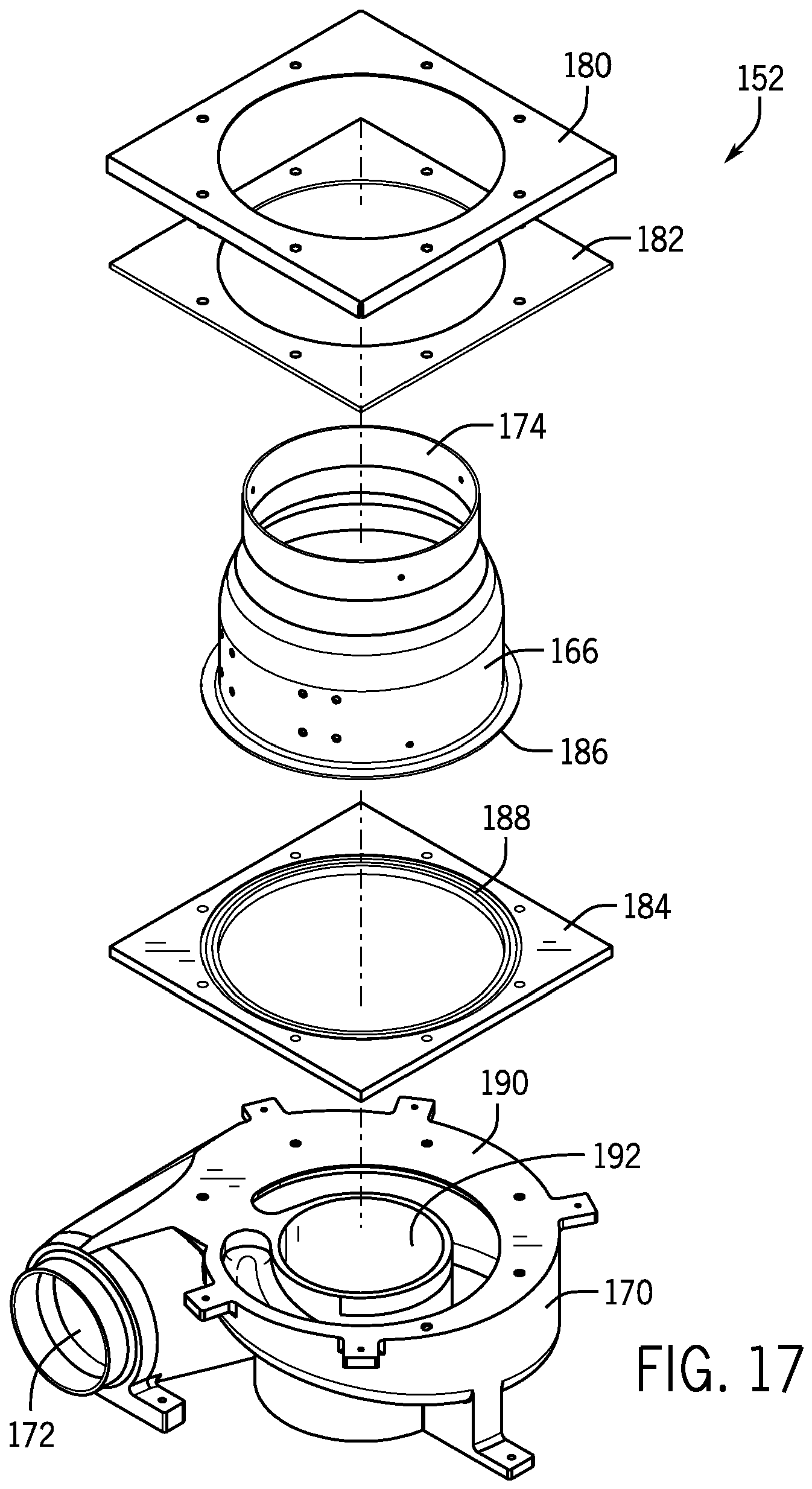 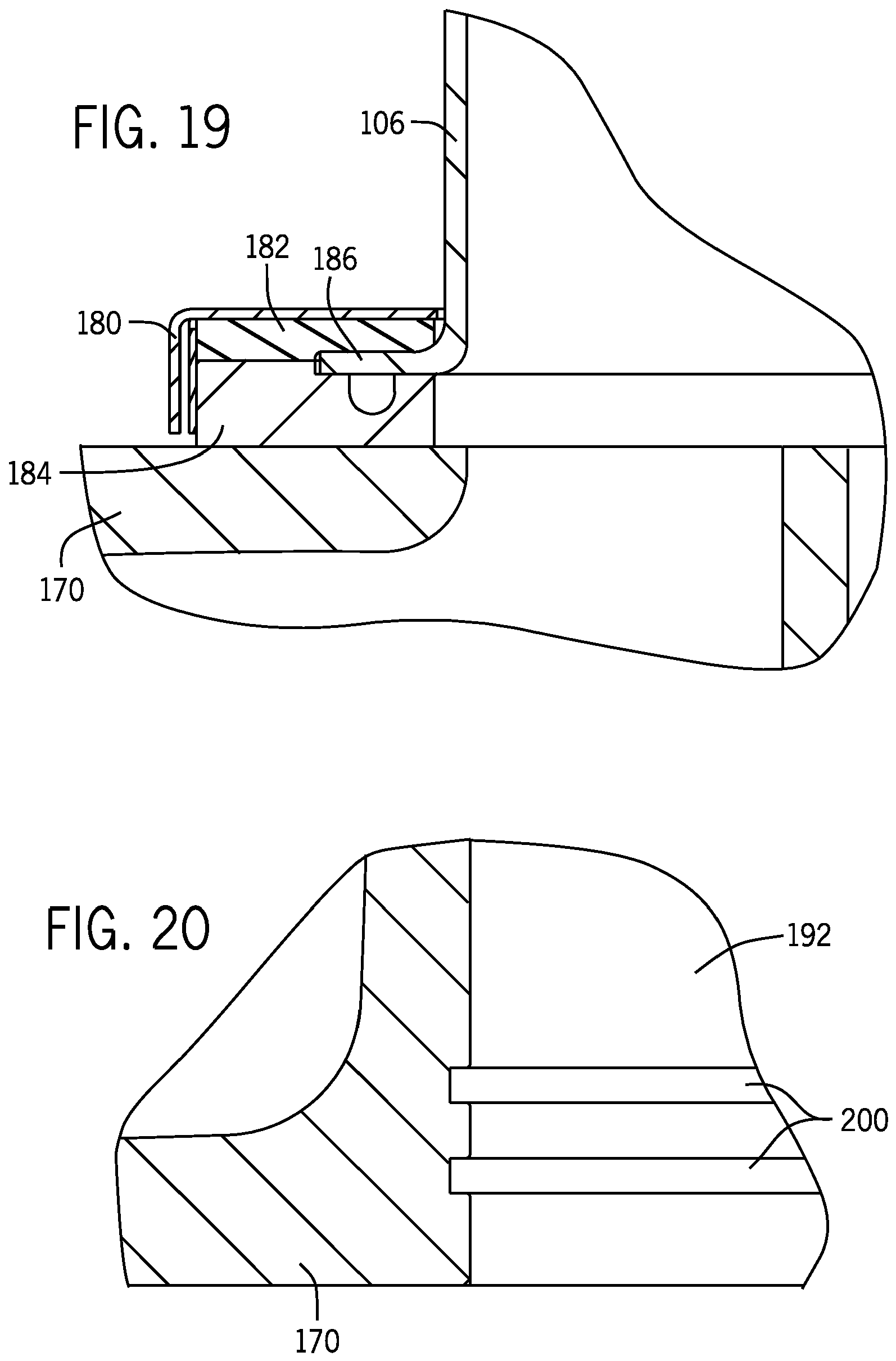 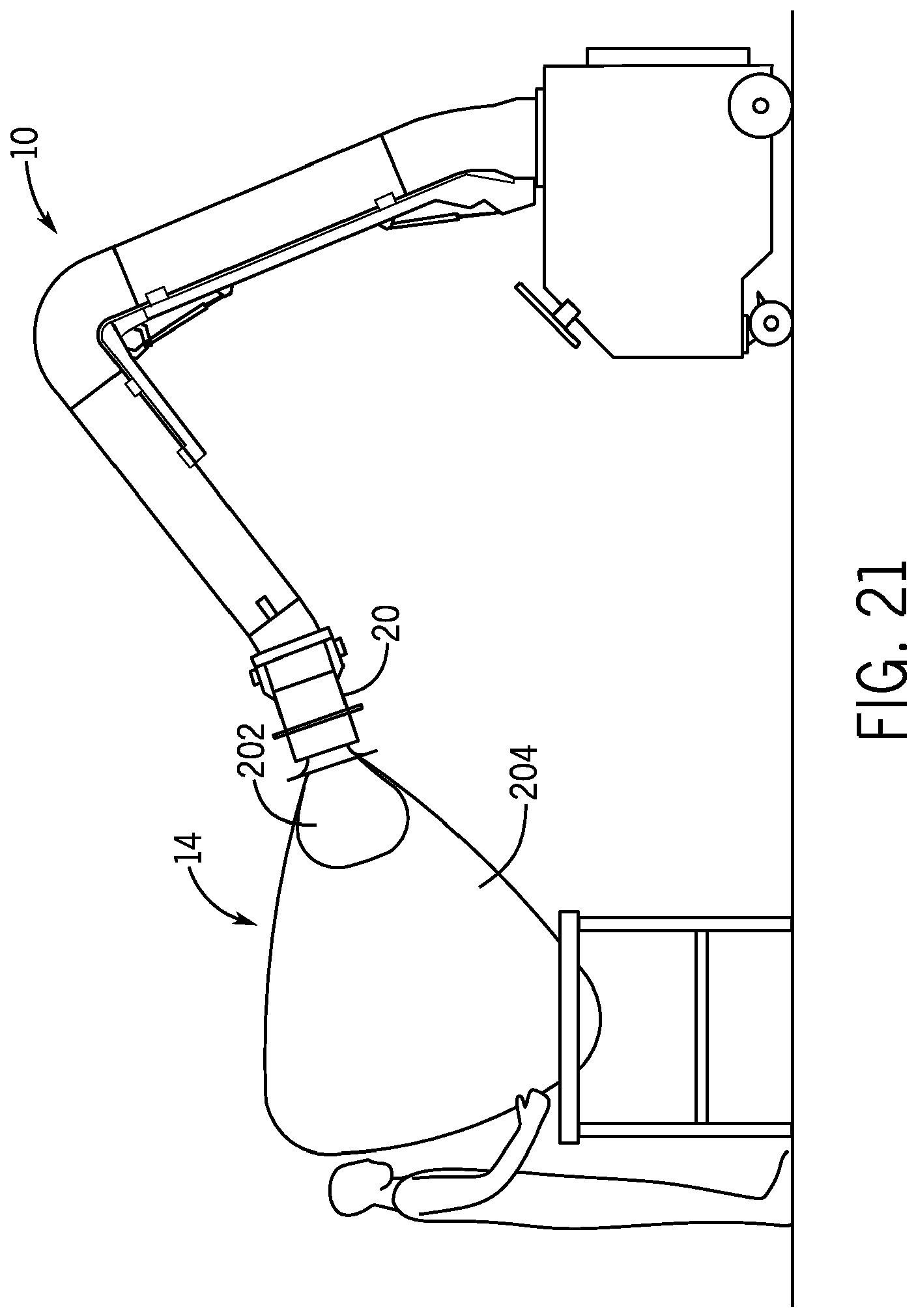 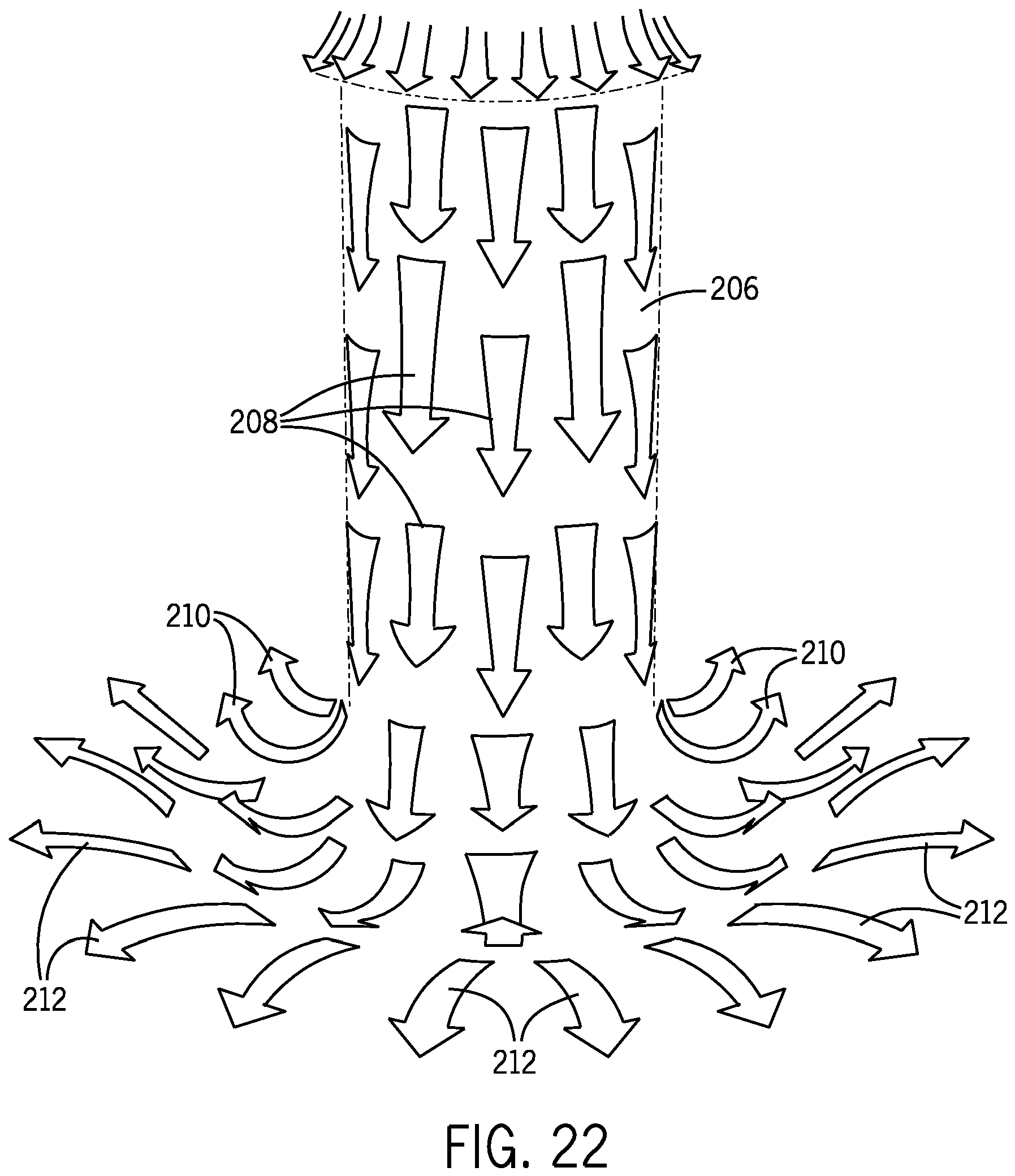 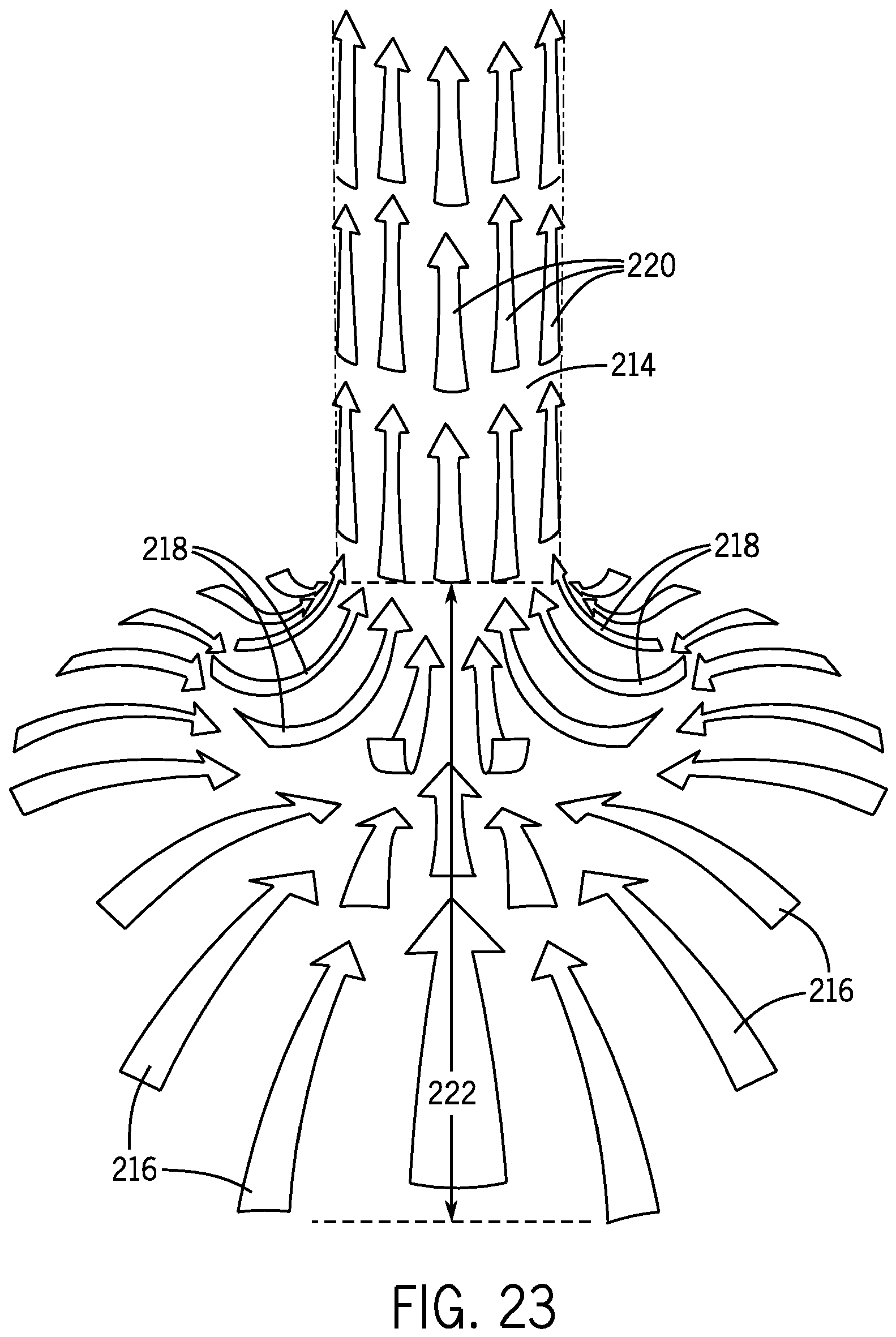