[0001] The present specification generally relates to semiconductor-based lasers and, more specifically, to distributed feedback lasers in the mid-infrared region that have an active core made of cascaded sections that further comprise modified waveguides to allow for improved performance. Methods of making and using such devices are also disclosed.

[0002] Distributed feedback ("DFB") lasers are a solid state diode laser technology that incorporates a diffraction grating into the active region of the laser. The DFB design allows for the emission of stable, single wavelengths that are slightly tunable via temperature change. The combination of multiple DFB lasers into a concatenated DFB quantum cascade laser allows for an expansion of the tunability of this technology. However, concatenated DFB QCLs suffer from high losses when unused laser sections are unbiased, and from high power usage when biasing is used. It would be advantageous if DFB-QCLs could be created that are more power efficient and yet still offer the expanded range of wavelengths observed with concatenated DFB-QCLs.
[0003] JP S57 196592 describes an optical integrated circuit with a passive waveguide and an active layer above. STRAUB A ET AL: "Simultaneously at two wavelengths (5.0 and 7.5 [micro]m) singlemode and tunable quantum cascade distributed feedback lasers",ELECTRONICS LETTERS, IEE STEVENAGE, GB, vol. 38, no. 12, 6 June 2002 (2002-06-06), pages 565-567 discloses a concatenated multi-wavelength quantum cascade laser.

Figure 3. An embodiment comprising a mid-IR multi-wavelength concatenated DFB QCL with an active core made of cascaded stages.

Figure 4. The embodiment in Figure 3, wherein the light emitted in the second or the third DFB section will experience high loss at the unbiased core section of the DFB sections in front of it.

Figure 6. A longitudinal cross-section of a QCL structure with a passive waveguide below the QC core (Figure 6A) and a front view (looking into the facet) of the same waveguide structure (Figure 6B).

Figure 8. The far field pattern of a QCL structure as shown in Figure 6, but without the first short GaInAs layer. This is an example of a FF pattern with a good fundamental mode, indicating that no light is propagating into the lower GaInAs layer.

Figure 9. The longitudinal cross-section (Figure 9A) and the lateral cross section (Figure 9B) of the proposed waveguide structure with the multi-wavelength concatenated DFB QCL structure. The short GaInAs layers serve as bridges to guide the light into the passive waveguide layer beneath.

Figure 10. A diagram showing a comparative simulation of the FF angle and power (percentage) within the 10 and 5 degrees solid angle for the QCL waveguide structure shown in Figure 6. The waveguide structure is a triple GaInAs-layer structure (0.67 µm, 0.65 µm, 0.65 µm) with an interval of d = 3.5 µm. The short GaInAs insert started at position 300 µm. The FF angle decreasing and the light intensity within the 10 and 5 degrees angle increasing indicates that the light propagates into the passive waveguide layers. It takes about 300-400 µm to stabilize. It is simulated with λ = 4.6 µm.

Figure 11. The top view of an alternative structure (Figure 11A). The passive InGaAs waveguide structure, and the bridge InGaAs structures are located on the side of the laser ridge. Figure 11B shows the longitudinal cross-section of an alternative waveguide structure in combination with the multi-wavelength concatenated DFB QCL. The short GaInAs layers serve as bridges to guide the light into the passive waveguide layer above. The trenches can be replaced by semi-insolating InP (SI-InP) (Iron doped).

times the multiplication of the period m and the effective refractive index, the many reflections combine with constructive interference, and the grating acts as a high-quality reflector. Phase shifted gratings may comprise, for example, 1/8, 1/4, or other phase shifted gratings.
[0038] The use of quarter-wave shifted, distributed feedback resonators in diode lasers is advantageous as they provide a resonance at the center of the grating stopband that is of higher quality factor than the resonances to either side. The narrowband resonance of a quarter wave shifted DFB transmission resonator has a Lorentzian response. Further information on the use of quarter wave shifted resonators can be found in H. Haus and Y. Lai, Theory of Cascaded Quarter Wave Shifted Distributed Feedback Resonators, 28(1) IEEEJ. QUANTUM ELEC. 205-213 (1992).
[0039] Gratings with multiple periods can be patterned by electron beam ("e-beam") writing or contact printing of a grating mask manufactured by e-beam lithography.
[0040] Additional components that may be found in embodiments comprise n-type cladding layers both above and/or below the gain material. The active gain and wavelength selective sections may be capped with a patterned electrical contact layer which comprises respective control electrodes dedicated to the different laser sections. An insulating dielectric material may be deposited in appropriate regions in the patterned electrical contact layer to isolate electrically the distinct regions of the laser structure.
[0041] In some embodiments, the lasing sections are separated by a p-type electrical isolation region, as described in U.S. Appl. No. 13/05 0,026. For example, an active waveguide core may be sandwiched between upper and lower n-type cladding layers. The active core and the lower n-type cladding layer, as well as at least part of the upper cladding layer, extend through the electrically isolated laser sections of the embodiment. A portion or portions of the upper n-type cladding layer comprise sufficient p-type dopant to define p-type electrical isolation region(s), which extend across part of the thickness of the upper n-type cladding layer along a projection separating the sections of the embodiment. The upper and lower n-type cladding layers may comprise InP, GaAs, AlGaAs, or any other conventional or yet-to-be developed cladding material suitable. For example, and not by way of limitation, it is contemplated that a variety of cladding materials might be suitable, including II-VI semiconductors, Si-Ge or GaN-based materials, etc. Additional methods of separating the lasing sections are described in U.S. Appl. No. 61/586,327.
[0042] By way of example, and not limitation, it is alternatively contemplated that the upper and lower n-type cladding layers may be GaAs-based cladding layers. Some of the cladding layers may be AlGaAs or (Al)GaInP instead of simply GaAs. For GaAs-based cladding layers, the core may be GaAs/AlGaAs, AlGaAs/AlGaAs, (Al)GaInP/(Al)GaInP, or GaInAs/(Al)GaAs. Additional layers of similar composition are contemplated for the remaining layers of the structure and should be selected to compensate for any lattice-mismatch between GaInAs and the GaAs substrate. For example, and not by way of limitation, other possible layers are GaInP, AlGaInP, GaAsP, and GaInAsP. For GaAs-based cladding layers, suitable dopants used to make (Al)GaAs semi-insulating include, but are not limited to Cr and O. At very low temperature growth, semi-insulating (Al)GaAs can be obtained without any dopant.
[0043] Embodiments herein may be used in either a pulsed or continuous-wave mode. Laser pulse duration may be from about 1 ns to about 1 ms. In some embodiments, the pulse width at FWHM is about 1 ns, 2 ns, 3 ns, 4 ns, 5 ns, 6 ns, 7 ns, 8 ns, 9 ns, 10 ns, 20 ns, 50 ns, 60 ns, 70 ns, 80 ns, 90 ns, 100 ns, 200 ns, 300 ns, 400 ns, 500 ns, 600 ns, 700 ns, 800 ns, 900 ns, 1 µs, 10 µs, 100 µs, or 1 ms. In some embodiments, devices embodied herein may be designed to fire all laser sections simultaneously, individually, and/or in a sequential or programmed order.
[0044] The embodiments described herein have tunabilities over 100 cm-1, over 200 cm-1, over 300 cm-1, over 400 cm-1, or over 500 cm-1. In some embodiments, the cDFBs embodiments have wavelength span from about 100 cm-1 to about 500 cm-1.
[0045] The peak wavelength of the laser sections may be selected to be the sampling wavelengths (λsi, I = 1 to n) of a broad absorption line of one molecule or several absorption lines from different molecules. In some embodiments, the cDFB lases in the region from about 2.5 µm to about 15 µm. In some embodiments, the cDFB lases at about 2.5, 2.6, 2.7, 2.8, 2.9, 3.0, 3.1, 3.2, 3.3, 3.4, 3.5, 3.6, 3.7, 3.8, 3.9, 4.0, 4.1, 4.2, 4.3, 4.4, 4.5, 4.6, 4.7, 4.8, 4.9, 5.0, 5.1, 5.2, 5.3, 5.4, 5.5, 5.6, 5.7, 5.8, 5.9, 6.0, 6.5, 7.0, 7.5, 8.0, 8.5, 9.0, 9.5, 10.0, 10.5, 11.0, 11.5, 12.0, 12.5, 13.0, 13.5, 14.0, 14.5, or 15.0 µm.
[0046] Embodiments may be used in any number of methods wherein IR radiation, and particular IR laser radiation would be advantageous. Particular applications include IR absorbance or reflectance measurements, IR and FTIR spectroscopies, Raman spectroscopy, gas and/or chemical weapons detection, chemical dynamics and kinetics measurements, thermal experiments, etc. In one embodiment, the embodiments are used in IR absorbance measurements to identify molecular compositions.

[0048] A proposed waveguide structure for the multiwavelength concatenated DFB QCL structure is shown in Figure 9. The light emitted by each DFB section will be guided into the waveguide layer (e.g., GaInAs) beneath each section through the bridge layer (for example, comprising GaInAs). The bridge may be placed in the center of each DFB section, where the light intensity in a quarter-wave-shifted DFB structure reaches maximum. This structure comprises a single passive waveguide layer going through the whole structure and the design of this layer should be narrow enough (∼ 8 µm) to avoid higher order modes. Guiding the light through the passive waveguide will allow the light to experience much less loss because the loss of low-doped GaInAs is in the range of 1∼2 cm-1. It can be further reduced by reducing the doping in the GaInAs layers.

b. at least two lasing sections placed in series, wherein each lasing section comprises gratings have non-equivalent periods or Bragg wavelengths, and characterised in that the lasing sections are separated by a electrical isolation region; and

i. an active waveguide in contact with a gain material;

ii. at least one bridge; and

1. each bridge is spatially located between the active waveguide and passive waveguide; and

2. the active waveguide, at least one bridge, and passive waveguide are not physically connected via a waveguide material.

2. The laser of claim 1, wherein the active waveguide and at least one bridge are parallel and from about 1 µm to about 8 µm apart at the nearest point.

3. The laser of claim 1 or claim 2, wherein the at least one bridge and the passive waveguide are parallel and from about 1 µm to about 8 µm apart at the nearest point.

4. The laser of any of claims 1, 2, or 3, wherein the lasing sections are separated by an electric isolation region comprising a p-type layer in an n-cladding layer or by removal of the high doping part of the n-cladding layer.

8. The laser of any of claims 1, 2, 3, 4, 5, 6, or 7, wherein the active region comprises at least two stacks wherein the stacks with laser sections at the shortest wavelengths are placed in the center of the device.

9. A method of detecting the signal output from a sample comprising:

a. applying at least one laser event from the laser of claim 1 to the sample; and

b. collecting at least some of the light after it has interacted with the sample.

10. The method of claim 9, wherein the laser wavelength is in the infrared region.

11. The method of claim 9 or claim 10, wherein the collecting of the light provides information on infrared absorbance of the sample.

12. The method of any of claims 9, 10 or 11, wherein the collecting of the light provides information on infrared reflectance of the sample. 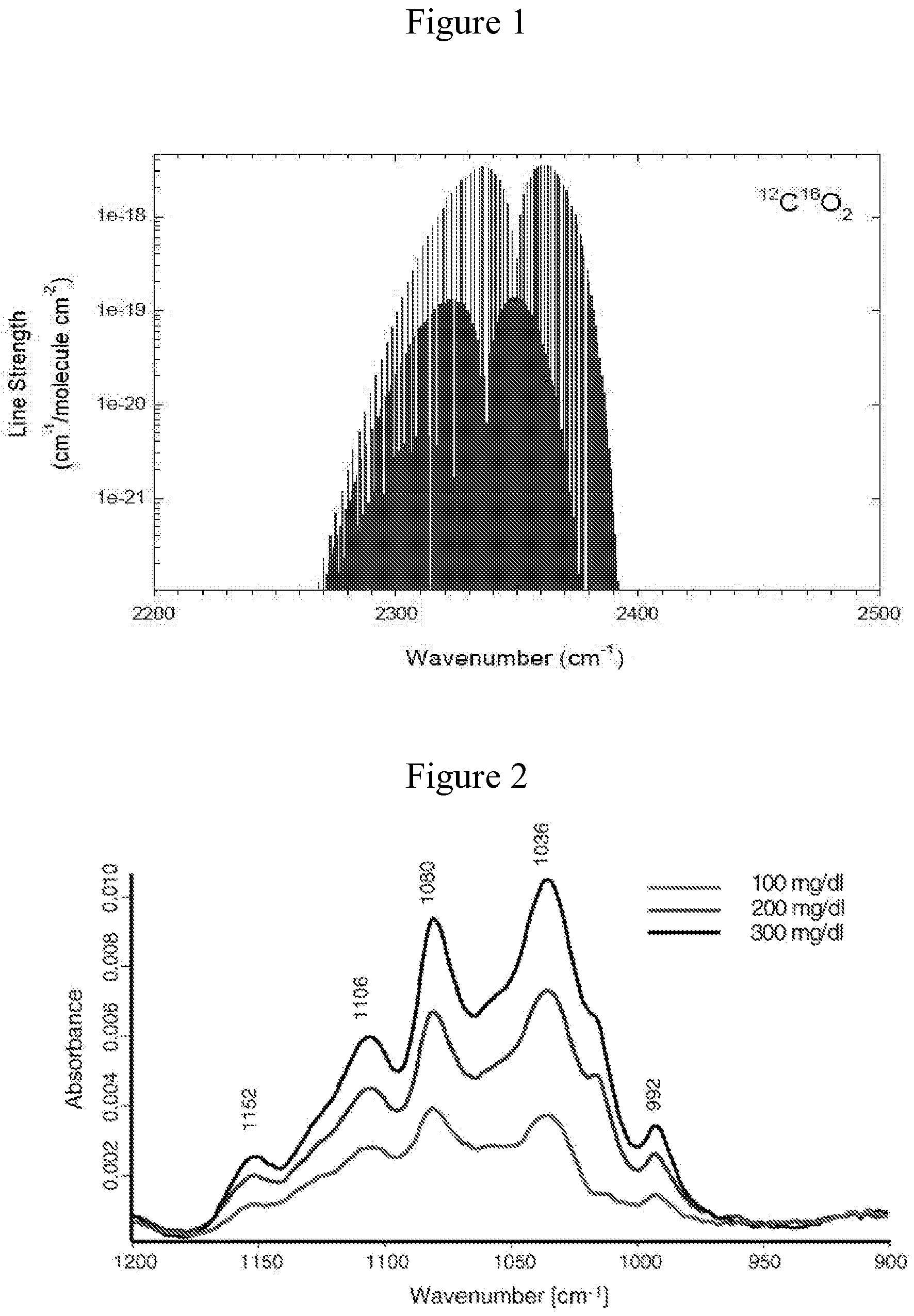 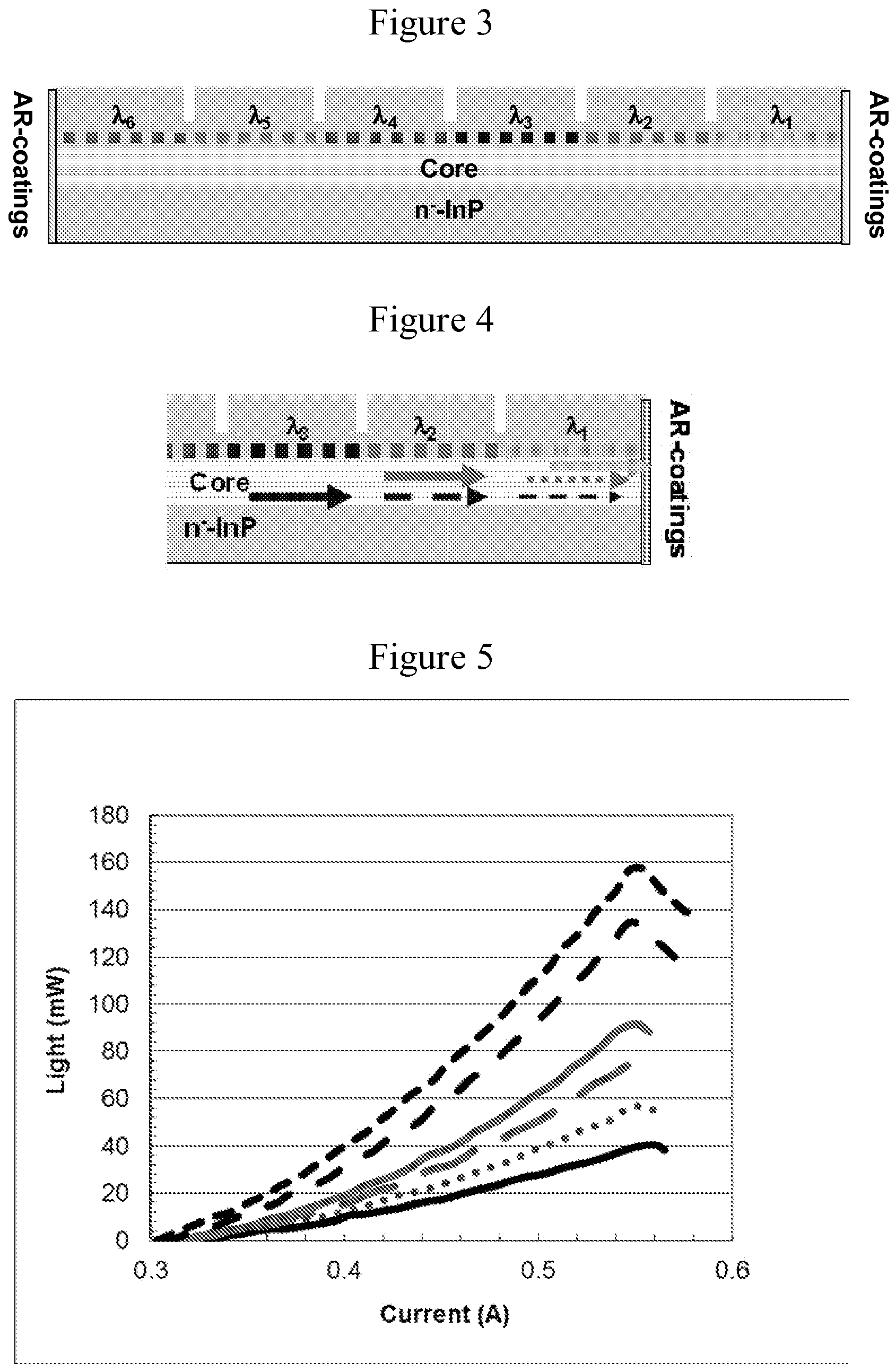 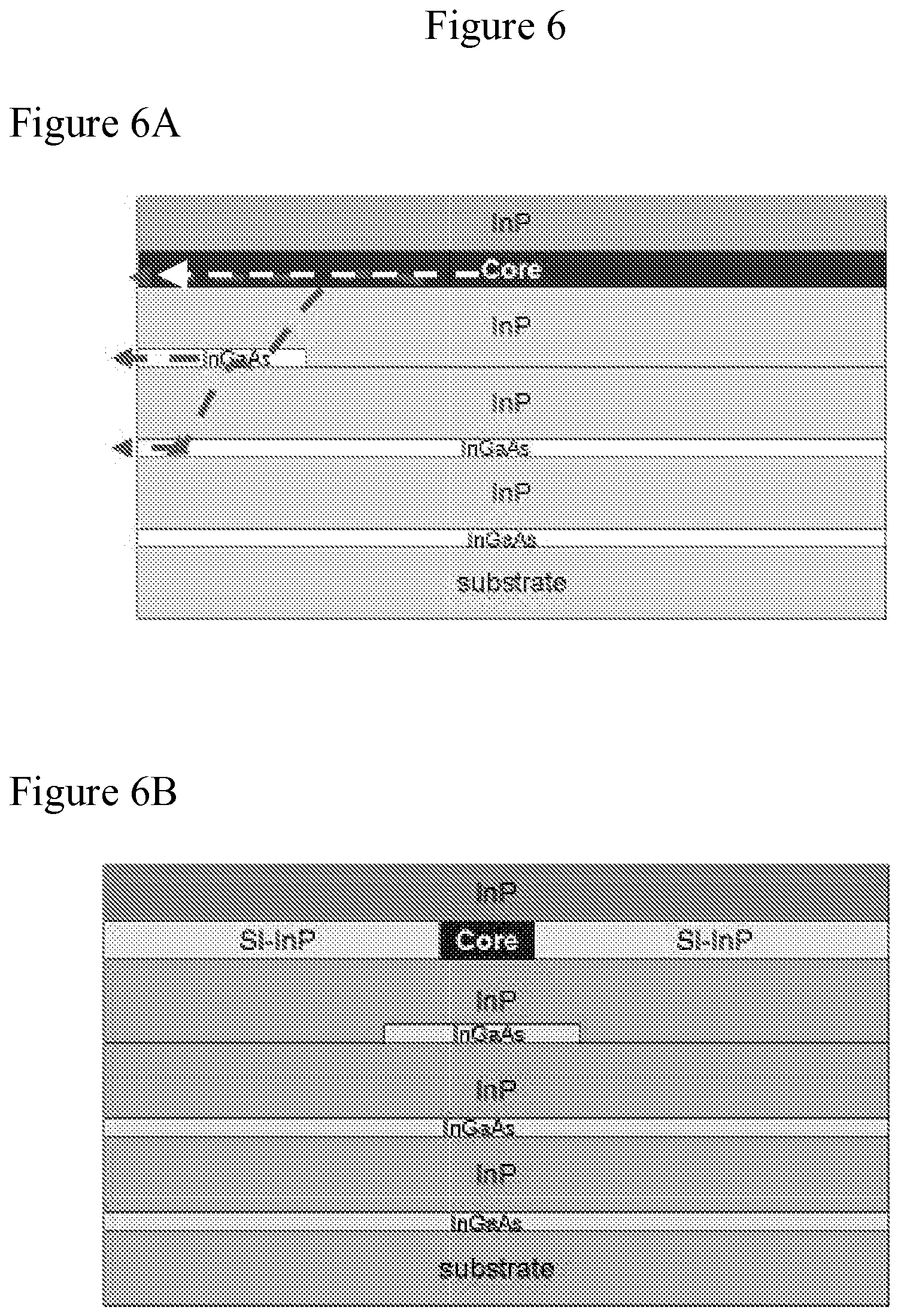 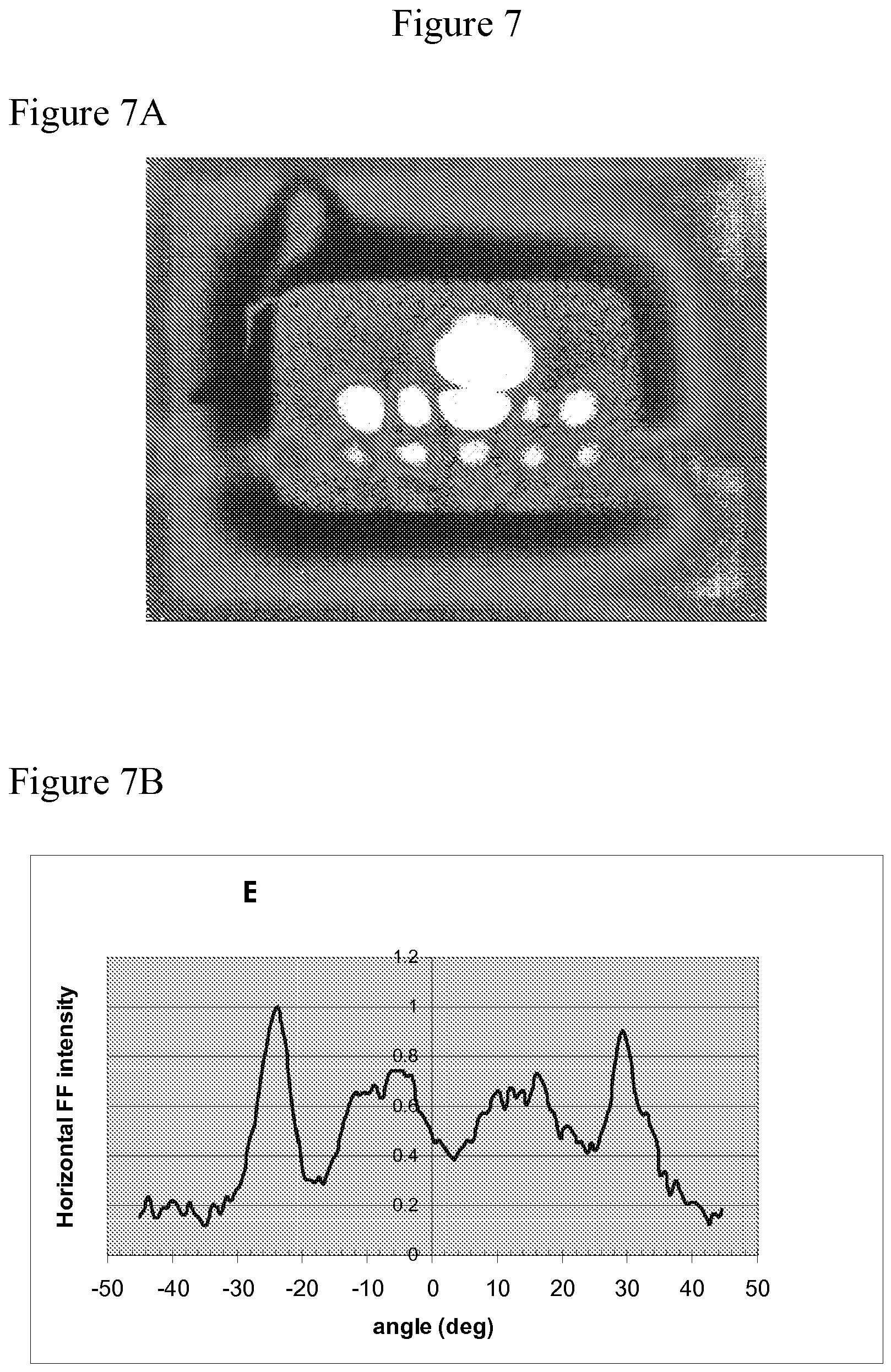 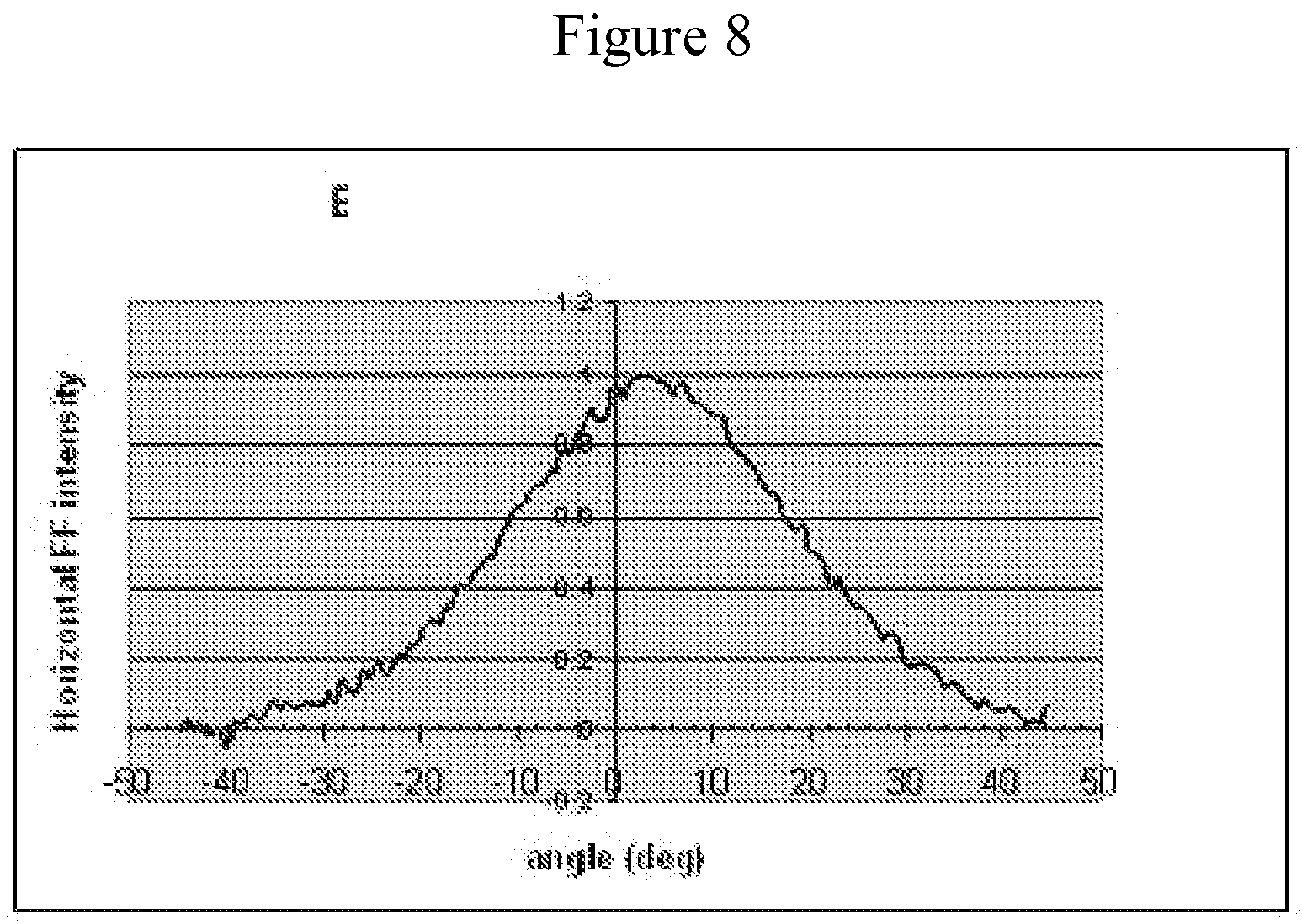 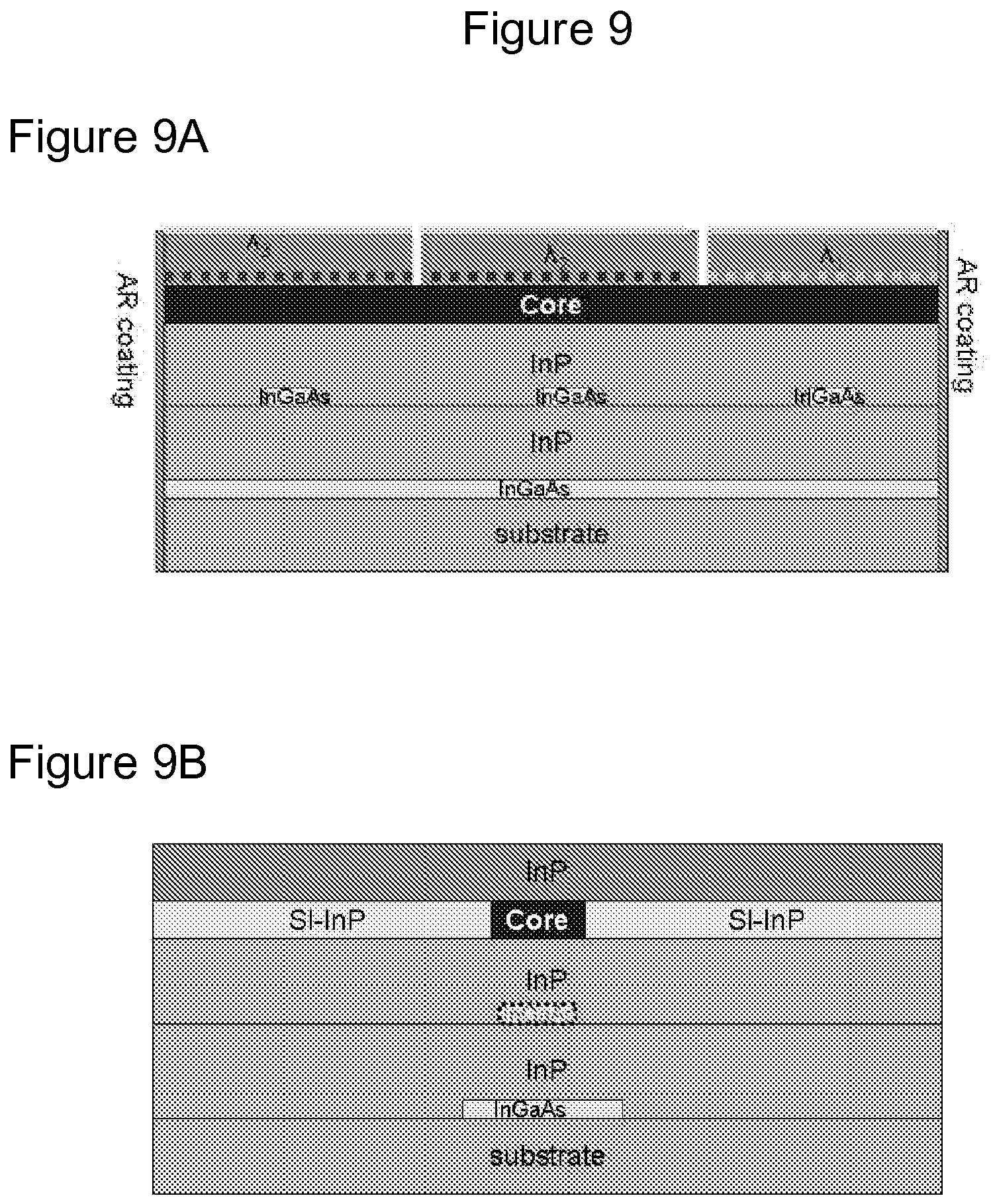 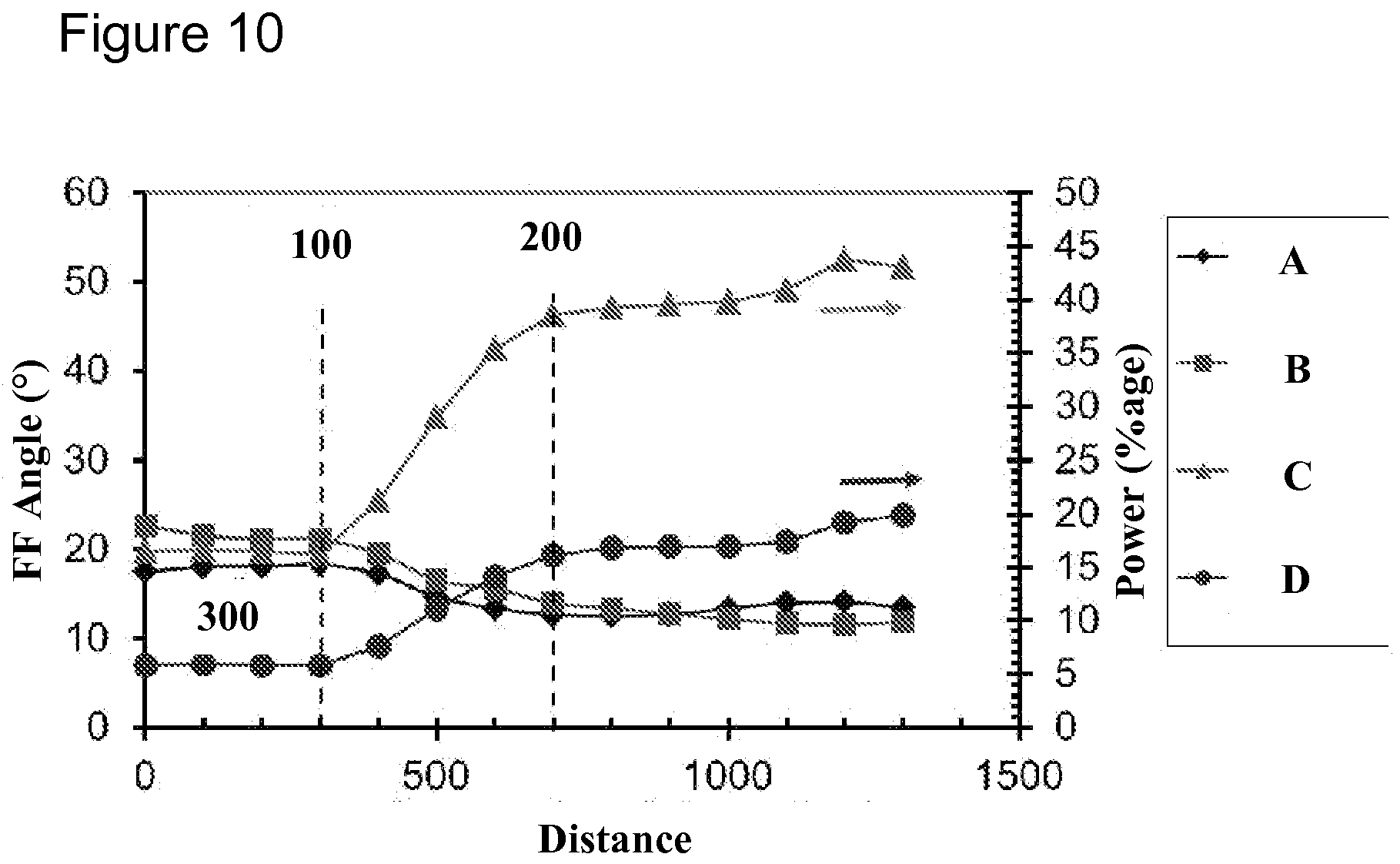 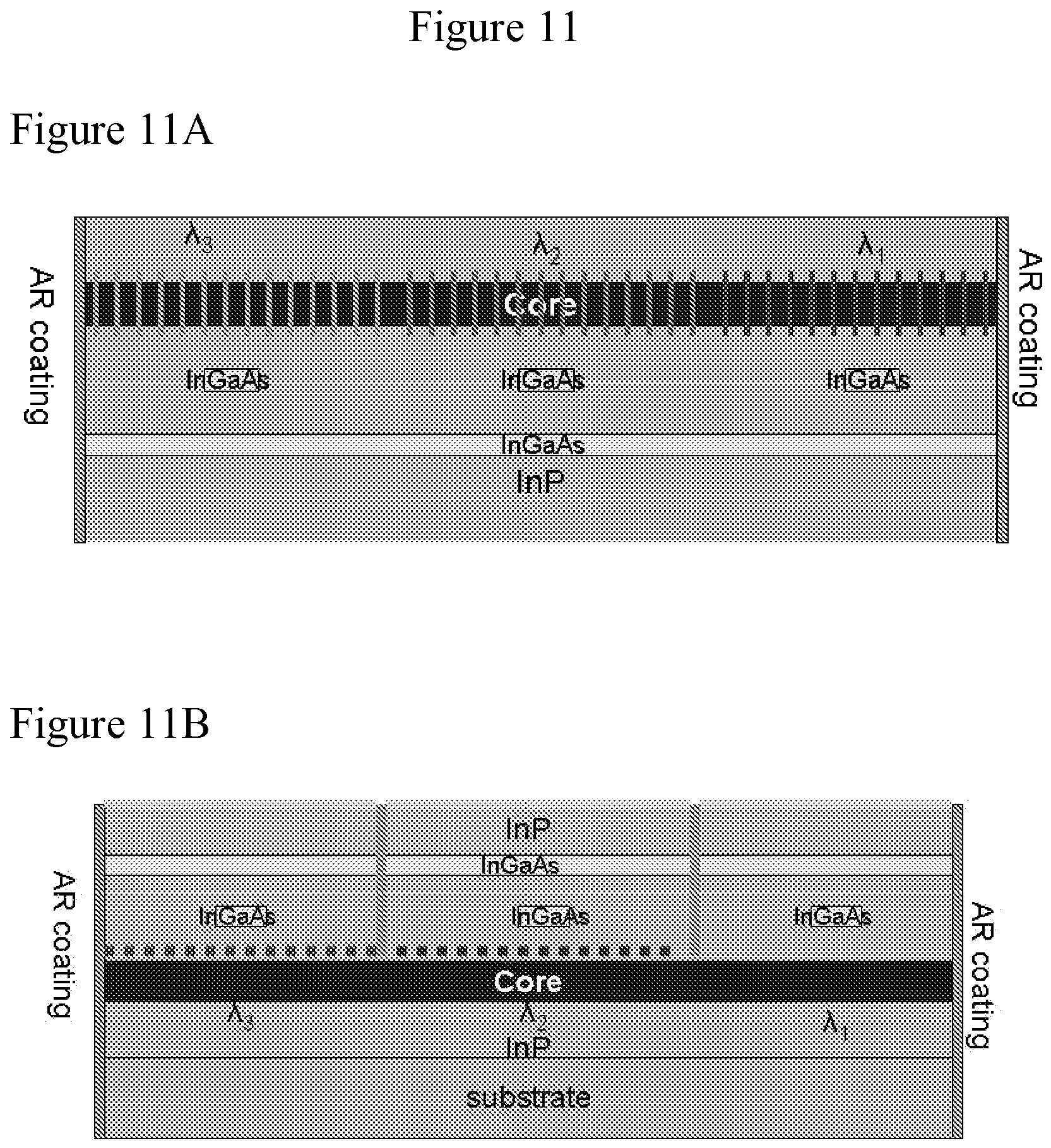