[0008] In one aspect, the present invention provides a power supply system for supplying a lamp unit including a plurality of circuits having different frequency responses, the system including a driver for receiving power from a battery as power supply and operable to provide the lamp power from the power supply, the battery being galvanically isolated from the lamp unit and from a mains supply of the power supply system, characterised in that the driver is operable to adjust the total power provided to the lamp unit from the power supply and to adjust the current drawn from the battery by controlling a duty cycle of a pulse width modulation and a frequency modulation of the provided lamp power.
[0009] The driver can vary the proportion of current drawn from the battery. The driver can also adjust the total power provided to the lamp unit from the power supply when a quantity or type of the lamp(s) in the lamp unit is changed or when the power supply is altered and optionally can adjust the power provided as the arc power and as the cathode power.
[0010] The lighting system may be an emergency lighting system.
[0011] The lamp unit may comprise one or more lamps, such as light emitting diodes (LED) or gas discharge lamps, e.g. fluorescent lamps.
[0012] Because the circuits have different.frequency responses the proportion of the power supply current in the respective circuits is different at different frequencies. The embodiment to be described allows a desired proportion of the available power to be provided as arc power and as cathode power by selecting an appropriate frequency at which the frequency responses are such that the respective proportions of power for the arc power and the cathode power exist. The battery current at the selected frequency may, however, not be at a desired level and, in the embodiment, the battery current may be reduced in order to adjust the total power provided to the lamp unit. The circuits may be multiple-order circuits.
[0013] The present invention also provides an emergency lighting arrangement including the power supply system as defined above, which may further include the power supply mentioned above.
[0014] The system allows the addition of another battery as a means of improving lamp power in emergency mode. PWM can be applied for regulating the total output power, adapting the emergency system to the extra battery. If the battery is changed, for example by adding additional cells (or replacing the battery with a different battery), or in any other way, this may alter the nominal current. In response to this, the switch duty cycle may be adjusted so that the current drawn from the battery is at the optimum level despite the changes to the characteristics of the battery.
[0015] The embodiment to be described illustrates how to implement a system able to supply the correct arc and cathode power for all lamp cases in the most optimised way. Further, the embodiment allows the possible addition of an extra battery for improving only the arc power instead of transferring the extra power with similar arc-cathode ratio to the load. Battery count reduction is also enabled by applying such regulation technique.
[0016] One possible implementation of the system of the embodiment for optimising the regulation of power levels delivered to the lamp arc and cathodes in emergency mode may be the following:
[0017] The embodiment provides power regulation/control in the lamp (e.g. fluorescent lamp arc and cathodes), independently of the lamp type and battery set voltage. As it may not be possible to set proper power levels for multi-lamp and multi-battery applying only FM due to filters and lamps characteristics, the use of PWM adds another degree of freedom, enabling the required regulation.
[0018] As some embodiments describe a fluorescent lamp driver it has to be stated such system is only one example described for better understanding and the invention may be used for other kinds of lamp drivers such as light emitting diodes as well. The arc power correlates to the lamp power which is the light generating power.

[0019] For a better understanding of the present invention an embodiment will now be described by way of example, with reference to the accompanying drawings, in which:

Figure 1 shows schematically the elements of a lighting arrangement that provides both a normal mode and an emergency lighting mode;

Figure 2 shows schematically an emergency driver in accordance with an embodiment of the invention;

Figure 3 shows an emergency driver circuit connected to a lamp and a battery in accordance with an embodiment of the invention;

Figure 4 shows the rectangular alternating output voltage produced by the input part of the emergency driver circuit of Figure 3, the vertical axis showing the voltage and the horizontal axis showing time;

Figure 10 shows battery current frequency response for the lamp arc, cathode and total supply power, the vertical axis being current in amps and the horizontal axis being frequency in Hertz;

DETAILED DESCRIPTION OF EMBODIMENT OF THE INVENTION

[0021] As briefly discussed above, the lighting arrangement shown in Figure 1 includes a control unit (not shown) which detects when the AC mains supply 1 is present and operating correctly - such as when the AC mains supply 1 presents a voltage higher than a certain threshold (187 volts in a 230 volt nominal supply, for example). When the AC mains supply 1 is present and operating correctly, the mains ballast 3 provides power to illuminate the lamp via closed relay 7. Power from the AC mains supply 1 is also provided to battery charger 13 to charge the battery 15 (or to keep the battery 15 fully charged). The battery 15 may comprise a plurality of cells. Another energy storage device may be used instead of the battery 15.
[0022] When the control unit detects that the AC mains supply 1 is interrupted or malfunctioning - such as when the mains AC supply 1 presents a voltage lower than a certain threshold (145 volts in a 230 volt nominal supply, for example) the control unit opens the mains relay 7, closes the emergency relay 11, and activates the emergency driver 17. Emergency driver 17 provides power to illuminate the lamp 5 from only the battery 15 via the closed emergency relay 11. Isolation is provided from the AC mains line 1 to the battery 15 for safety reasons. The lamp 5 may be a gas discharge lamp or a light emitting diode (LED).
[0023] An emergency driver 17 in accordance with an embodiment of the invention is shown in Figure 2. The emergency driver 17 may comprise a boosting converter stage 19, e.g. a push-pull converter with a step-up characteristic, whose input is connected directly to the battery 15. The boosting converter stage 19 may be also comprised by a combination of a push-pull converter followed by a step-up converter, e.g. a boost converter, or a combination of a step-up converter followed by a push-pull converter.
[0024] The emergency driver 17 may provide a first cathode supply 21 and a second cathode supply 23 to heat the cathode filaments in case where the lamp 5 is a fluorescent lamp and a lamp arc supply 25. In case of a light emitting diode as lamp 5 there may be only a lamp supply 25. The lamp supply 25 may be a single stage converter as e.g. a flyback converter which takes over the function of the boosting converter stage 19.
[0025] Figure 3 shows one example of the emergency driver 17 circuit connected to the lamp 5 and battery 15.
[0026] The emergency driver 17 comprises an input part X in the form of a bidirectional push-pull inverter. The input part X includes identical first and second portions connected in parallel across the battery 15. Each of the portions comprises a switch S1/S2 and a primary winding section N). By alternate operation of the switches S1/S2, the input part produces a rectangular alternating output voltage, as shown in Figure 4. The output may include a "dead time" D when both the switches S1 and S2 are closed, when the output is at zero volts. The duty cycle of the switches determines the duration of the dead time. The time for which each of the switches is closed and the frequency of operation (opening/closing) of the switches is controlled by a driver controller (not shown).
[0027] The input part X of the emergency driver 17 supplies an output part Y. The respective lamp cathodes 30A and 30B are supplied via the two identical secondary windings N3 of the push-pull inverter of the output part Y with LC series identical filters connected to them. The first cathode 30A is connected to the first secondary winding 32A via series connected capacitor Cf1 and inductor Lf1. The second cathode 30B is connected to a second secondary winding 32B via a series connected second capacitor Cf2 and inductor Lf2.
[0028] The lamp arc supply is provided by another secondary winding 40 of the push-pull inverter through a L series C parallel filter, comprising inductor LS (connected in series between the secondary winding 40 and the first cathode 30A) and capacitor CL (connected in parallel across the first cathode 30A and the second cathode 30B).
[0029] A voltage is applied to the lamp filters with a magnitude proportional to the battery voltage and the turns ratio, as described by equation (1).

where NP and NS are the primary and secondary turns number and UBatt is the battery 17 voltage.
[0030] The primary turns number is the same for both arc and cathodes supply (N1 in fig. 3). The secondary turns number is the same for both of the two cathodes (N3 in fig. 3) and different for the arc supply (N2 in fig. 3).
[0031] The rectangular waveform shown in Figure 4 is composed of the sum of its first and its odd harmonics, changing harmonics amplitudes according to its duty cycle. Such voltage is applied to the set filters and loads (arc and cathodes).
[0032] For a given lamp, the typical frequency response of the lamp arc current AC for a certain L series C parallel filter (Ls and CL), considering the lamp as an equivalent resistance RL (fixed), is shown in Figure 5. The plot is based on the response of equation (2).

Where L is the inductance

C is the capacitance

s is the frequency

[0033] For a given lamp, the typical frequency response of the cathode current Cc for a certain LC series filter (Lf1, and Cf1, or Lf2 and Cf2) and a certain cathode resistance Rcath supplied with a rectangular waveform is shown in Figure 6, whose plot is based on equation (3).

Where L is the inductance

C is the capacitance

s is the frequency

VIN is the voltage

to adjust the current drawn from the battery by controlling a duty cycle (D) of a pulse width modulation and a frequency modulation of the provided lamp power.

3. An emergency lighting arrangement including the power supply system of claims 1 or 2.

4. The emergency lighting arrangement of claim 3, including the power supply. 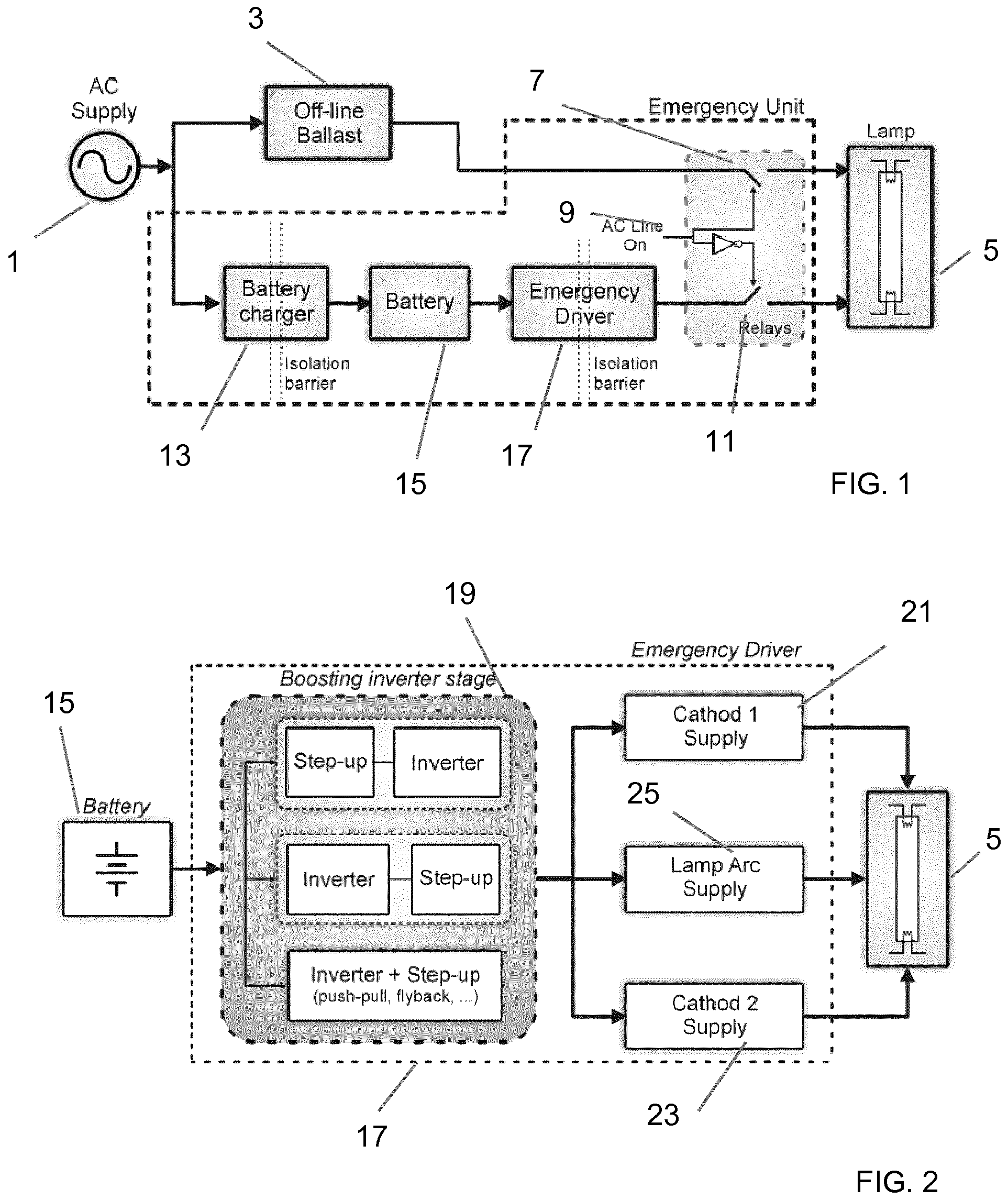 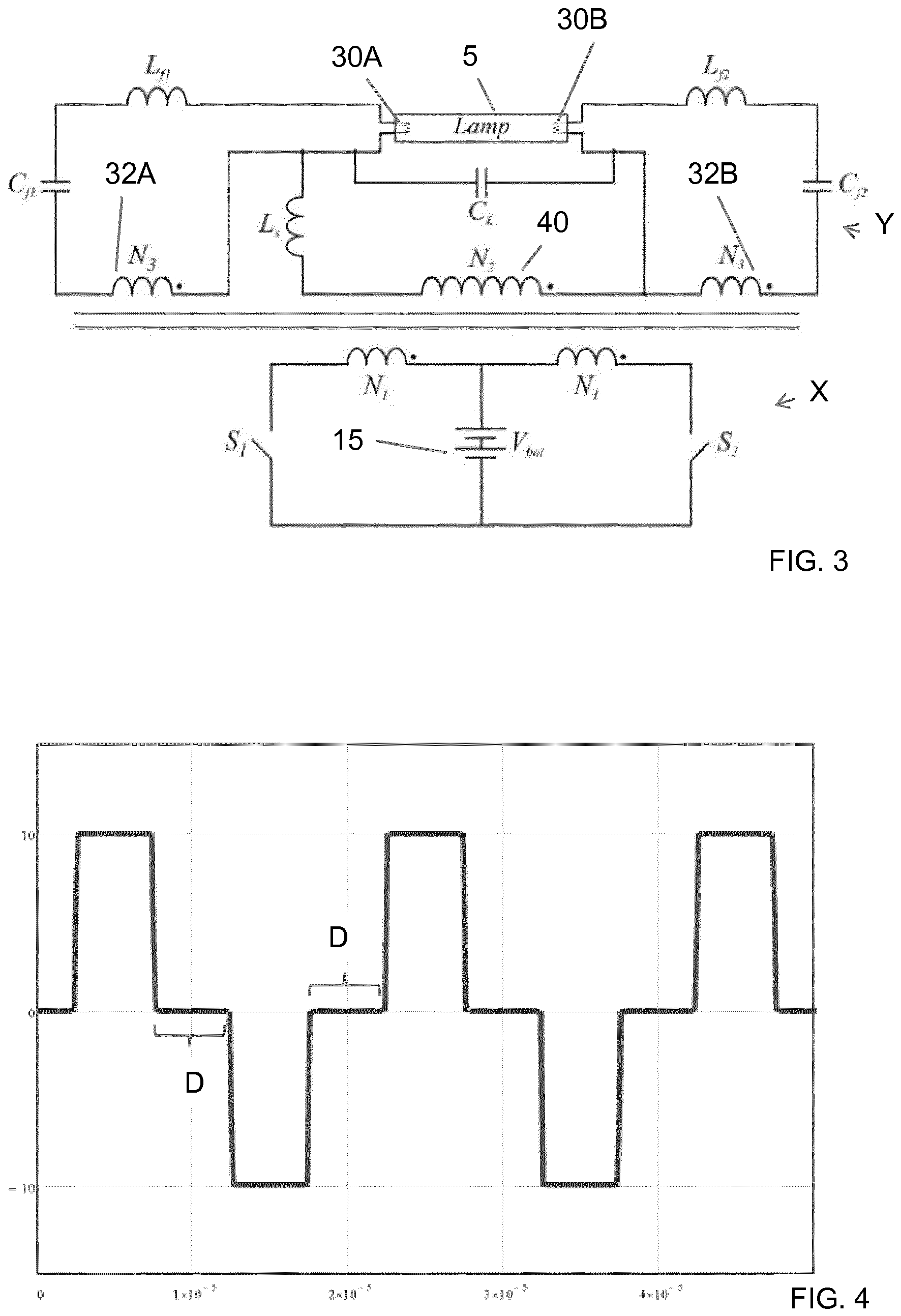 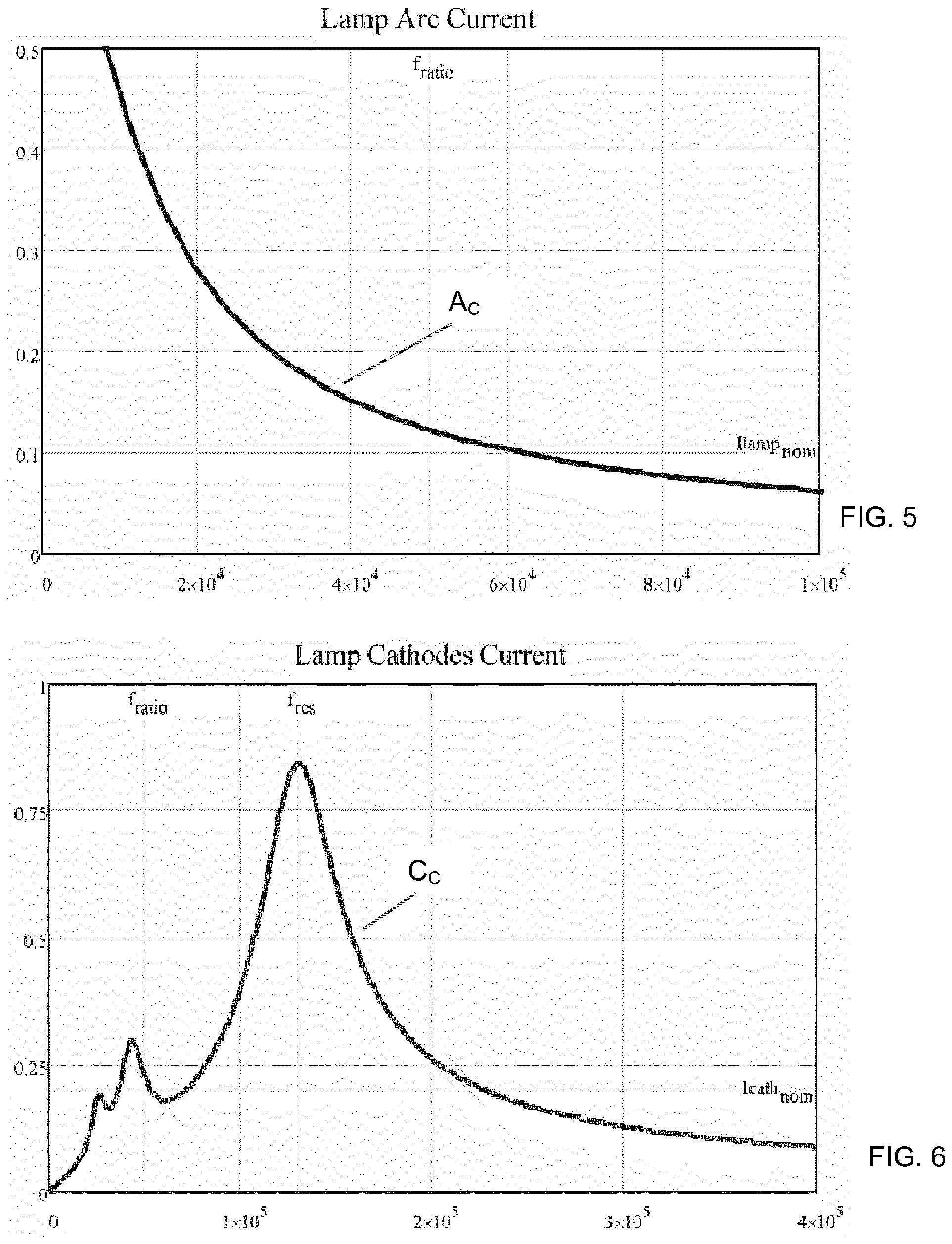 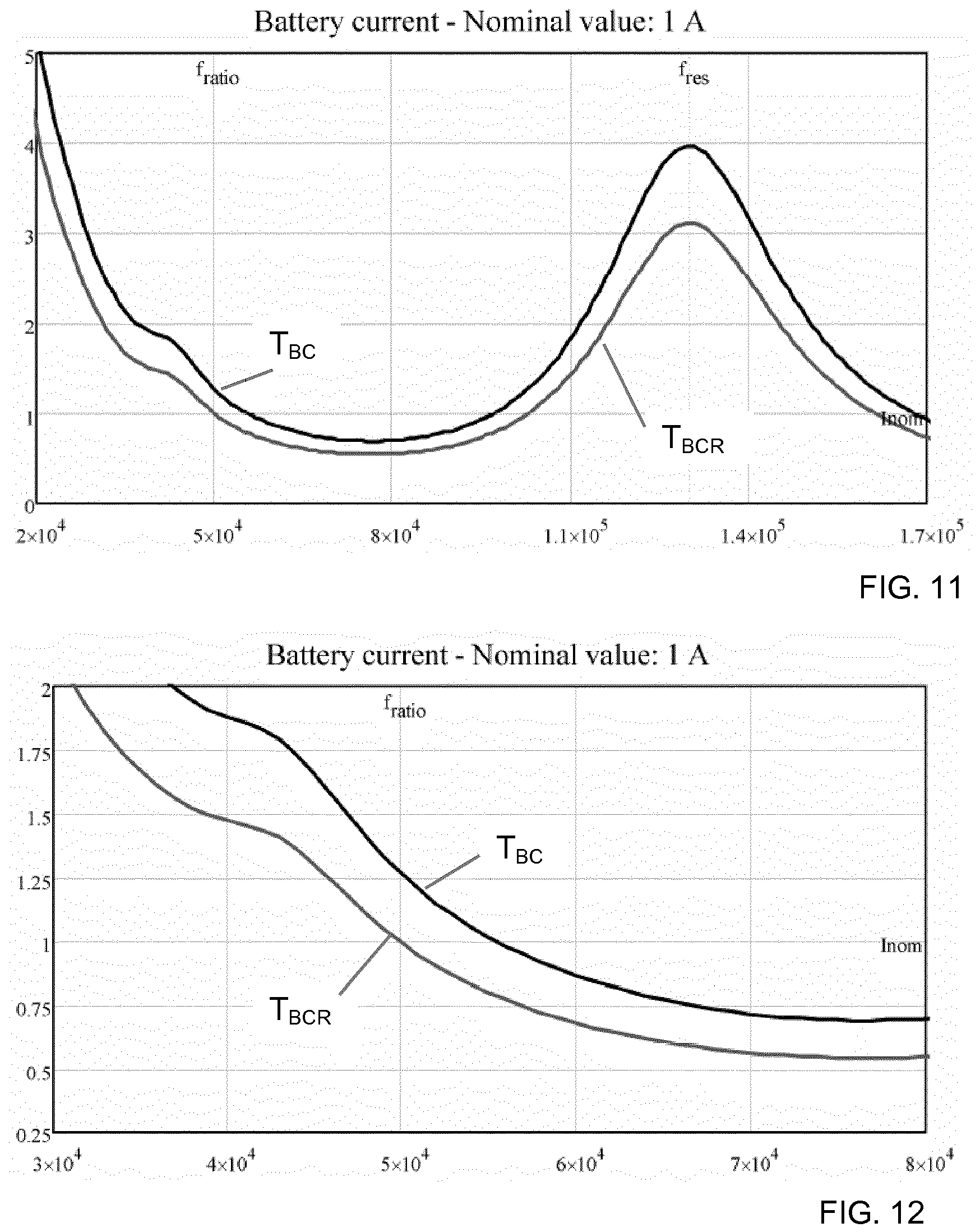