[0002] Heavy reformate, which typically includes greater than about 90% by weight C9+ aromatics, has historically been blended into gasoline streams. With current regulations on the aromatics content and high end boiling point of gasoline, however, it is no longer possible to blend heavy reformate into gasoline. Considering the market growth rate of demand on para-xylene, the conversion of heavy aromatics to para-xylene by transalkylation is considered to be one economically viable way to utilize the heavy reformate CN101190866 A and CN101172924 A disclose catalysts for the conversion of heavy aromatics to xylenes by transalkylation comprising at least two zeolites and at least three different metal components.
[0003] The restrictions on the aromatics content in gasoline are compelling the petroleum refiners to find alternative routes for utilization of excess heavy reformate obtained from catalytic reforming of naphtha. Heavy reformate streams typically include a high concentration of C9+ aromatics, usually consisting of at least 90% by weight C9 aromatics. Thus, because of the strict restrictions on the content of aromatics in gasoline, additional uses for aromatics, such as are found in a heavy reformate stream, must be found.

Figure 3 is a schematic of a transalkylation apparatus described herein.

[0008] Although the following detailed description contains many specific details for purposes of illustration, it is understood that one of ordinary skill in the art will appreciate that many examples, variations and alterations to the following details are within the scope of the invention. Accordingly, the exemplary embodiments of the invention described herein and provided in the appended figures are set forth without any loss of generality, and without imposing limitations, on the claimed invention. The scope of protection is defined by the appended claims.
[0009] As noted above, heavy reformate streams typically have high concentrations of C9+ aromatics. Due to strict restrictions on the amount of aromatics that can be included in gasoline, portions of these streams cannot be used directly as gasoline additives. One economically viable option for making use of the aromatics found in heavy reformate streams is to convert the C9+ aromatics present in the stream into xylenes by transalkylation.
[0010] Transalkylation allows for the integration of certain refining processes and results in the production of economically valuable petrochemicals. The extra C9+ aromatics that result from the refining process that are typically rejected and removed from the gasoline blending pool, for example, because of environmental regulations and maximum boiling point restriction, can then be used as a feedstock for production of valuable petrochemicals such as para-xylene, as well as certain light olefins, such as ethylene, propylene, and butenes.
[0011] Steam cracking is one petrochemical process by which saturated hydrocarbons can be broken down into smaller, often unsaturated, hydrocarbons. It is the most common industrial method for producing light alkenes (i.e., olefins), including ethene and propene.
[0012] Feedstocks provided to the transalkylation process can include heavy reformate. The composition of an exemplary heavy reformate is provided in Table 1.
Table 1. Exemplary Heavy Reformate Composition.

[0026] A solution is described for the production of valuable xylenes from inexpensive heavy reformate feedstock. A typical composition of a heavy reformate feedstock contemplated for use herein is summarized in Table 1. The light gases, which are by products from transalkylation process and which include mainly light paraffins, can be further processed in a steam cracker to produce ethylene, propylene and butadiene. The catalyst utilized in the transalkylation process can be any of the catalysts described in U.S. Published Patent Application No. 2010/0029467. The transalkylation reaction temperature of the process can be in the range of between about 200-540°C, the reaction pressure can be between about 1-5 MPa, and liquid hourly space velocity can be between about 1-5 per hour. The ratio of hydrogen to heavy reformate ratio can be between about 1 to 4.
[0027] As shown in Figure 3, liquid products from the transalkylation include benzene, toluene, and xylenes. Hydrogen gas and C9+ hydrocarbons can be separately recycled back into the transalkylation reactor. The light gas, such as may be collected from the top of the splitter, can be recovered and supplied into a steam cracker under typical steam cracker reaction conditions to produce ethylene, propylene and butadiene. As is known in the art, steam cracking is a process by which saturated hydrocarbons can be broken down into smaller, often unsaturated, hydrocarbons. Steam cracking is a principal industrial method for producing light alkenes (or olefins), including ethene (or ethylene) and propene (or propylene).
[0028] Generally, during steam cracking, a gaseous or liquid hydrocarbon feed like naphtha, LPG or ethane is diluted with steam and then heated in a furnace. The reaction temperature is typically very high, greater than about 600°C and typically about 850°C, but the reaction residence time is very short, typically less than 0.1 seconds and more frequently less than about 0.01 seconds, resulting in gas velocities reaching speeds beyond the speed of sound, in an effort to improve the yield of desired products. After the cracking temperature has been reached, the gas is quickly quenched in a transfer line heat exchanger to stop the reaction.
[0029] The products produced by the steam cracking reaction will depend upon the specific composition of the feedstock, the hydrocarbon to steam ratio, and the cracking temperature and furnace residence time.
[0030] Based upon the transalkylation reaction conditions, the light hydrocarbon feedstock (which can include ethane, LPGs, or light naphtha) can produce a product stream that is rich in the lighter alkenes, such as ethylene, propylene, and butadiene.
[0031] Tables 4 and 5 provide recent trends for gasoline specification trends in North America and Europe. As shown in each of the tables, the amount of aromatic content has steadily declined. This makes it necessary to find other uses for the heavy reformate produced catalytic reformers in refineries. The reduced RVP (Reid vapor pressure) also dictates for decreased reformate concentrations in gasolines.
Table 4. Trend in gasoline specification in North America
Table 5. Trend in gasoline specification in Europe

[0045] For exemplary purposes, a zeolite-mixed-zeolite multimetal catalyst according to the present invention, designated as Catalyst of the Example 1, was prepared and tested. The catalyst of the Example 1 has a zeolite-mixed-zeolite support, and includes three metal components loaded on the zeolite and alumina binder in a predefined fashion, and then mixed and bind together into extrudates.

Example 1. Preparation of the Catalyst of the Example 1.

[0046] Beta zeolite (ammonium form, HSZ-940NHA, obtained from Tosoh Chemical Corporation, Japan), having an SiO2/Al2O3 molar ratio of 37, BET surface area of 570 m2/g, a mean particle size 6 micron, and a nominal content of Na2O 0.05% by weight was used in the catalyst preparation. The Beta zeolite was stirred with nickel nitrate hexahydrate aqueous solution to ion-exchange nickel, and the solid that was obtained was dried and impregnated with platinum chloride aqueous solution to produce Ni-Beta-Pt according to the following procedure: Nickel nitrate hexahydrate, Ni(NO3)2.6H2O, was dissolved in distilled water to produce 200 mL of 10% by weight solution. 30 g of uncalcined Beta zeolite was added to this solution and stirred continuously for 1 hour, then filtered, and finally washed two times to remove the nitrate ions. The resulting solid was dried at room temperature for 2 hours, and then oven dried at 120°C for 3 hours. The Ni-Beta was then impregnated with 0.1% by weight platinum solution. In this method based on the wettability test, 0.038 g of platinum chloride, Pt(Cl)2, was dissolved in 36.1 g of distilled water. To dissolve the platinum chloride completely, 2.5 mL of ammonium hydroxide solution was added to the mixture with stirring. The Ni-Beta was then impregnated by incipient wetness method using this solution. The resultant solid was dried at room temperature for 2 hours and then oven dried at 120°C for 3 hours. Then 4 g of alumina binder (Cataloid AP-3, obtained from CCIC, Japan) in dry powder form was dispersed in a 16 mL aqueous solution containing 0.62 g cerium nitrate, Ce(NO3)3.6H2O, and stirred continuously for 30 minutes to prepare a homogenously dispersed alumina. To this mixture, 4 g of uncalcined and untreated ZSM-5 (CT-435, obtained from CATAL, UK) having silica to alumina molar ratio of 27 was added in powder form to the slurry. Subsequently 12 g of Ni-Beta-Pt was added and mixed thoroughly to produce a thick paste which was then converted into 1.0 mm extrudates. The ratio of Beta to ZSM-5 to AP3 was 3:1:1. The extrudates were dried at room temperature overnight, then dried in air-circulated oven at 120°C, and then calcined in a furnace at 500°C for 3 hours. The catalyst developed can be symbolized as follows: [(Ni-Beta-Pt)+ZSM5+(Ce-AP3)].

Example 2. Testing of Catalyst of Example 1.

[0052] Although the present invention has been described in detail, it should be understood that various changes, substitutions, and alterations can be made hereupon without departing from the principle and scope of the invention. Accordingly, the scope of the present invention is determined by the following claims.
[0053] The singular forms "a", "an" and "the" include plural referents, unless the context clearly dictates otherwise.
[0054] Optional or optionally means that the subsequently described event or circumstances may or may not occur. The description includes instances where the event or circumstance occurs and instances where it does not occur.
[0055] Ranges may be expressed herein as from about one particular value, and/or to about another particular value. When such a range is expressed, it is to be understood that another embodiment is from the one particular value and/or to the other particular value, along with all combinations within said range.

nickel, cerium and platinum; and 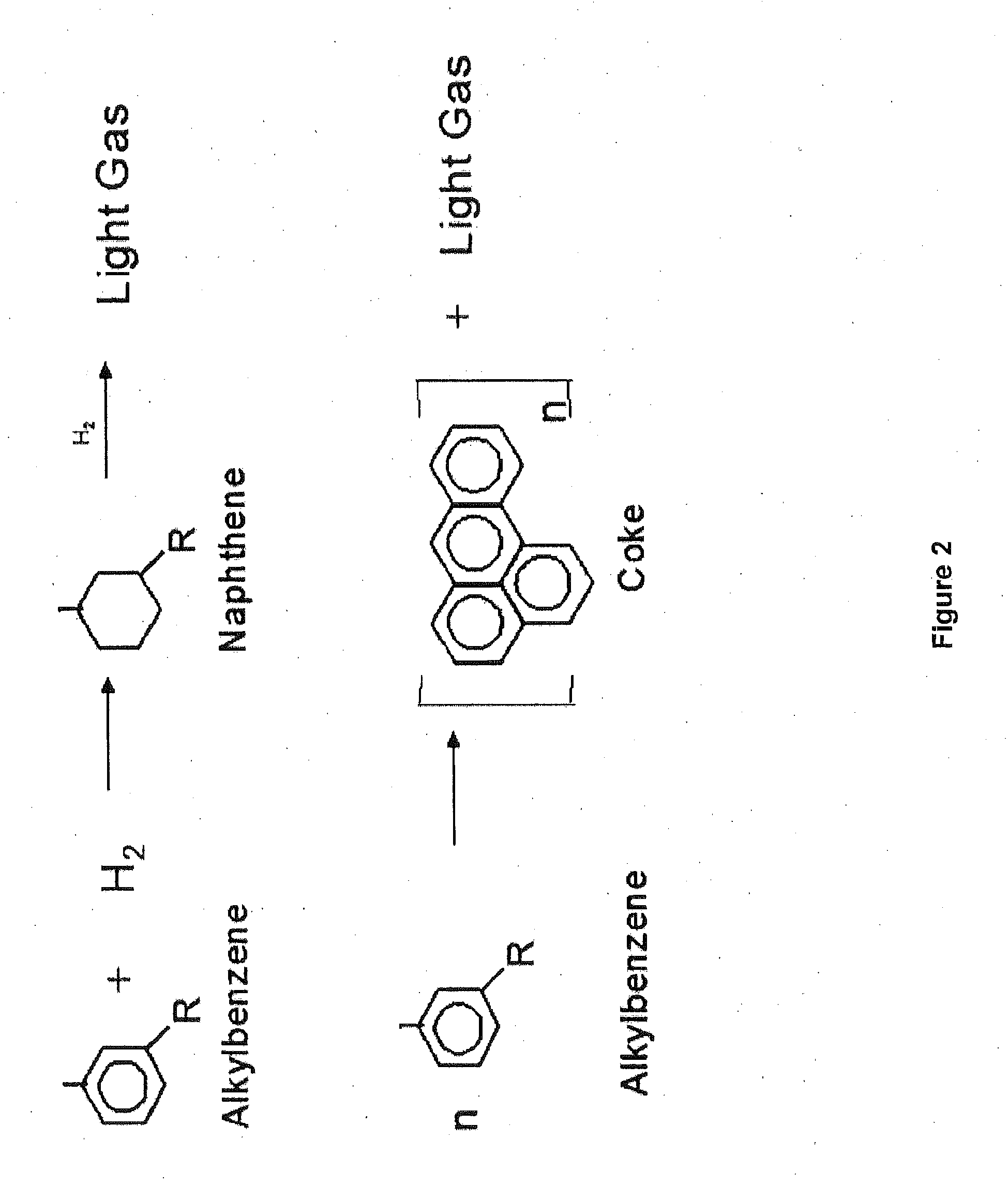