[0002] Modern analogue addressable fire alarm systems use many loop powered alarm sounders controlled by microcontrollers, to alert people in protected areas to the presence of a fire alarm condition. Many alarm sounders use piezo-electric transducers (a piezo) to reduce the current consumption of the sounders in the alarm condition. Typically these analogue addressable systems can continuously monitor all outstation types on each addressable loop for faults, to ensure the system can be relied on to detect fires and alert people. In the case of alarm sounders, the actual sounder output can normally only be switched on and verified during regular tests with the system in the alarm state.
[0003] While it would be an enormous benefit to continuously verify that the alarm sounder can actually provide its correct output, background monitoring has always proved difficult to successfully implement especially with sounders using a piezo element. In known systems, complex monitoring waveforms need to be generated, so that background monitoring is normally only available on speech variants. However, as a relatively large acoustic output during the background monitoring has always proved to be unavoidable, its use in bedrooms for example, is clearly unacceptable.
[0004] One way to guarantee reliable fault detection of the sounder would be to require that the monitoring frequency be fixed at a relatively low in-band frequency. This configuration would produce a monitoring current high enough to provide reliable discrimination. This however would prevent the monitoring from being silent, and it would limit its general use.

Fig. 1 is a block diagram of an embodiment hereof;

Fig. 2 is a flow diagram of aspects of operation of the embodiment of Fig. 1; and

Fig. 3 is a flow diagram of additional aspects of the method of Fig. 2.

a class-D amplifier coupled to a piezo-electric transducer, the amplifier and the transducer are carried in the housing; and

2. A sounder as in claim 1 which communicates with a displaced regional monitoring control unit.

3. A sounder as in claim 1 where the control circuits carry out an initial calibration process to establish a reference value.

4. A sounder as in claim 1 where the process is terminated when a predetermined current value is detected, and, wherein a local capacitor provides a current flow to drive the amplifier.

5. A sounder as in claim 4 where the control circuits monitor a capacitor voltage over a period of time and establish a current flow therefrom.

7. A sounder as in claim 6 where a decay time parameter of the storage capacitor is measured.

8. A sounder as in claim 7 which includes increasing a duty cycle of a test signal which drives the transducer.

9. A sounder as in claim 8 which includes increasing a volume parameter of the test cycle.

10. An alarm sounder comprising a class-D amplifier driving a piezo-electric transducer with a variable background monitoring waveform that is initially set at a first frequency which substantially exceeds an end of a predetermined audio band.

11. A sounder as in claim 10 where the waveform comprises a square wave.

12. A sounder as in claim 11 which includes a capacitor where a voltage decay on the capacitor is indicative of the sounder monitoring current.

13. A sounder as in claim 12 wherein the decaying voltage is monitored, at least intermittently, to measure a sounder audio producing current.

14. A sounder as in claim 13 where the waveform frequency is intermittently reduced while continuing to monitor the sounder audio producing current.

15. A method of monitoring operation of a transducer comprising:

driving a piezo-electric transducer with the square wave;

monitoring a transducer current as the frequency is being varied; and

determining if the current indicates expected operation of the transducer. 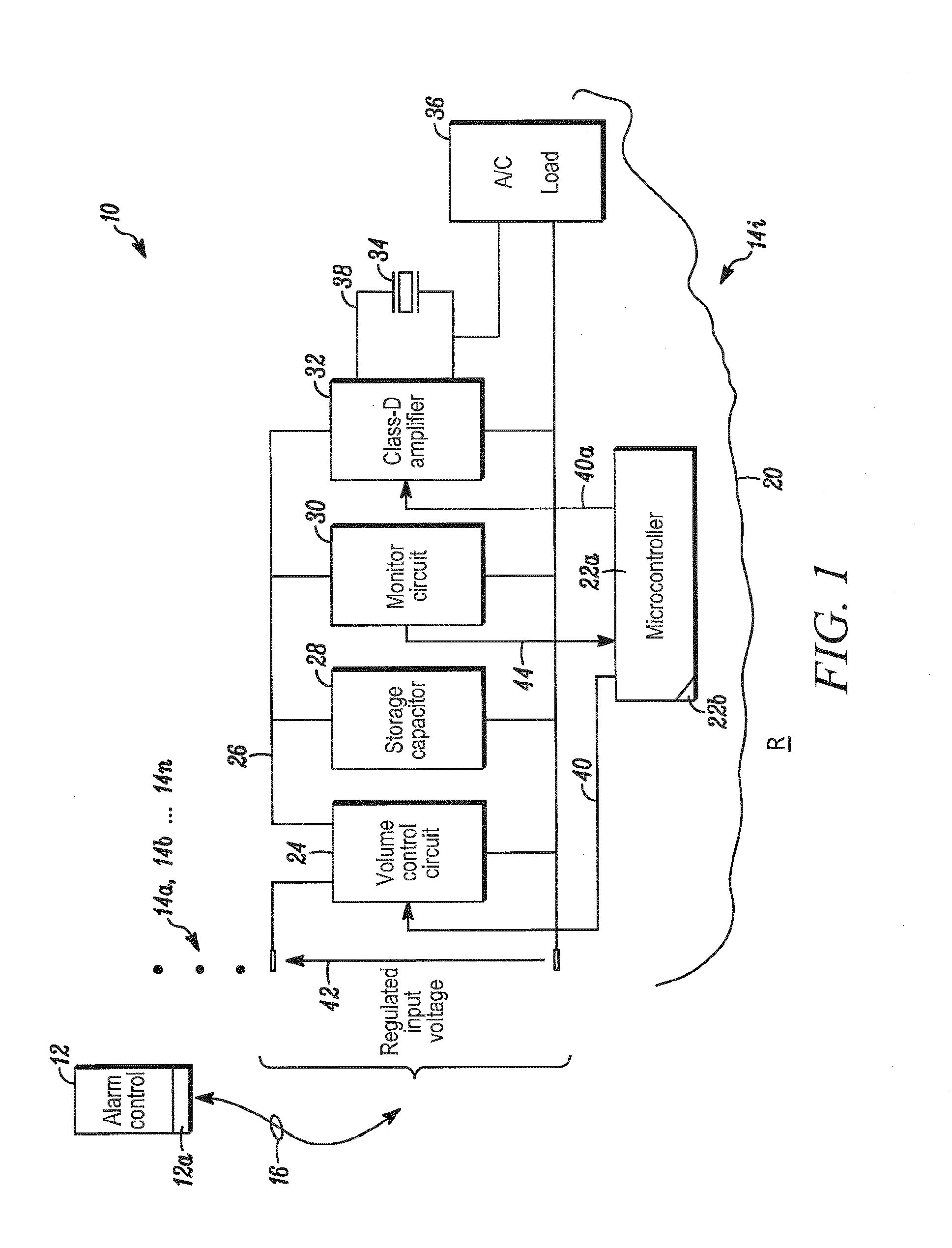 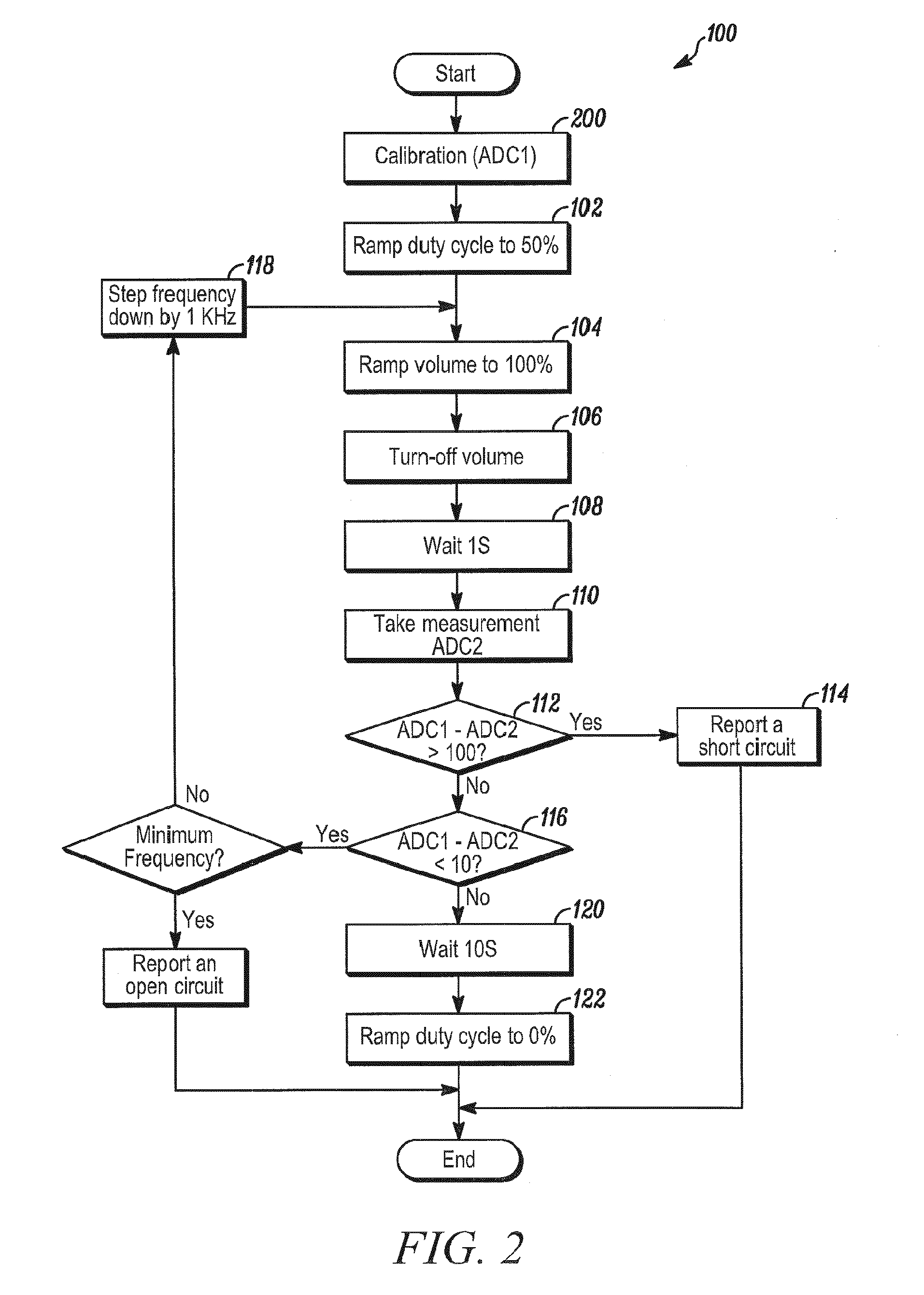 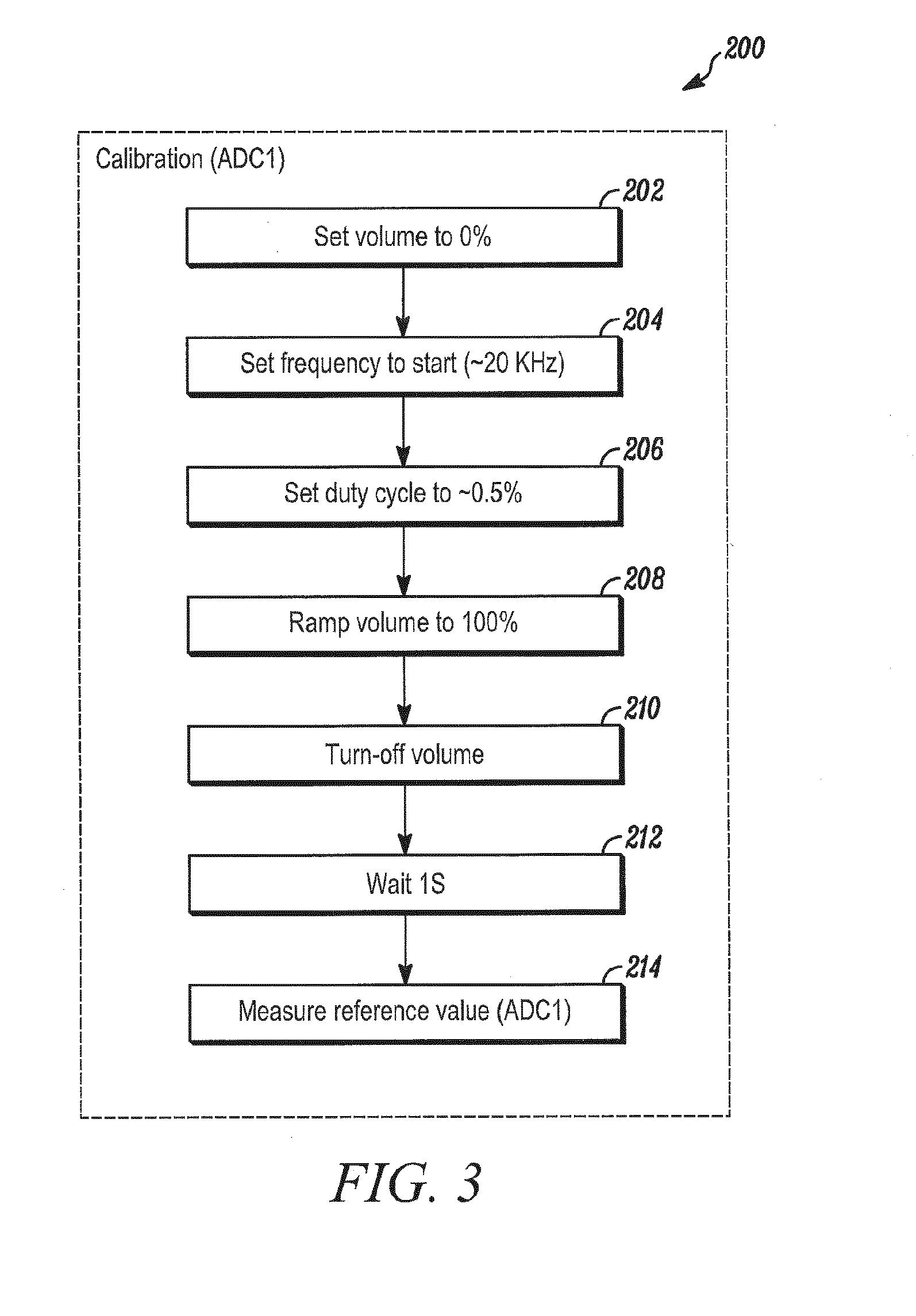