[0001] The present invention relates to a process for converting natural gas byproducts to synthetic fuel.

[0018] The invention is defined by the claims.
[0019] One object of the present disclosure is to provide an improved Fischer-Tropsch based synthesis process for synthesizing hydrocarbons with a substantially increased yield.
[0020] The present technology provides a very elegant solution to ameliorate the shortcomings that have been clearly evinced in the prior art references. Despite the fact that the prior art, in the form of patent publications, issued patents, and other academic publications, all recognize the usefulness of a Fischer-Tropsch process, steam methane reforming, autothermal reforming, naphtha recycle, and other processes, the prior art when taken individually or when mosaiced is deficient a process that provides for the synthesis of a hydrogen rich stream in a syngas generator and reaction in a Fischer-Tropsch or suitable reactor for the purpose of enhancing the production of, as one example, diesel fuel or aviation fuel. As is well known, the Fischer-Tropsch process is particularly useful since the resultant synthetic fuel is "clean" fuel and does not have the contamination level typically associated with the same petroleum based fuel.
[0021] The present disclosure amalgamates, in a previously unrecognized combination, a series of known unit operations into a much improved synthesis route for production of synthetic hydrocarbon fuels. This process not according to the invention engages a counterintuitive step, namely, the removal of a production fraction, namely the naphtha, which, despite being a refined product, is then effectively destroyed making use of the naphtha as a feedstock for a syngas generator and then recycled into the Fischer-Tropsch process. This keystone unit operation is propitious since it works in concert with all of the other precursor operations which, of their own right, are highly effective.
[0022] By employing the naphtha product fraction as a recycled feedstock to the syngas generator, as an autothermal reformer (ATR) or steam methane reformer (SMR) or combination thereof, results in an increase in the volume of diesel, or as it is more effectively referred to in the art, as syndiesel.
[0023] With the broad applicability of the technology discussed herein, the amalgamation of the GTL process to a conventional hydrocarbon liquids extraction plant facilitates transformation of the low value natural gas byproducts to beneficially economic synthetic fuels.
[0024] In accordance with the present invention, there is provided a process for converting natural gas byproducts to synthetic fuel, comprising:
[0025] In this manner, the low value byproducts used as a feedstock in an integral GTL and hydrocarbon liquid extraction plant are of particular benefit.
[0026] Copious advantages flow from practicing the technology of this application, exemplary of which are:
[0027] Referring now to the drawings reference will now be made to the accompanying drawings in which:

Figure 1 is a process flow diagram of methodology known in the prior art using autothermal reformer technology;

Figure 2 is a process flow diagram of methodology known in the prior art using steam methane reformer technology;

Figure 3 is a process flow diagram similar to Figure 1;

Figure 4 is a process flow diagram similar to Figure 2;

Figure 5 is a process flow diagram showing the combination of autothermal and steam methane reforming technologies;

Figure 6 is a process flow diagram, showing the integration of the autothermal and steam methane technologies;

Figure 7 is a schematic diagram illustrating a conventional hydrocarbon liquids extraction plant; and

Figure 8 is a process flow diagram illustrating a methodology within a natural gas processing facility.

[0031] The present invention has applicability in the fuel synthesis art.

[0032] Referring now to Figure 1, to illustrate prior art, shown is a process flow diagram of a circuit for converting gas-to -liquids with the result being the production of naphtha and syndiesel. The process is generally denoted by numeral 10 and begins with a natural gas supply 12, which feedstock can be in the form of raw field gas or pipeline quality treated gas, usually with bulk sulfur and hydrocarbon liquids removed. The natural gas is then pre-treated in a pre-treatment unit 20 to which steam 14, hydrogen 18 and optionally carbon dioxide 19 may be added as required. The pre-treatment unit may include, as is well known to those skilled in the art, such unit operations as a feed gas hydrotreater, sulfur removal and quard operation and a pre-reformer to produce a clean vapour feed stream 22 for the syngas generator, denoted in Figure 1 as an autothermal reformer (ATR) unit 24. The ATR 24 may be any suitable catalytic partial oxidization unit, however, as an example, an ATR that is useful in this process is that of Haldor Topsoe A/S., Uhde GmbH and CB&I Lummus Company. The ATR process and apparatus have been found to be effective in the methodology of the present invention and will be discussed hereinafter.
[0033] Generally, as is known from the ATR process, the same effectively involves a thermal catalytic stage which uses a partial oxygen supply 16 to convert the preconditioned natural gas feed to a syngas 26 containing primarily hydrogen and carbon monoxide.
[0034] The so formed syngas is then subjected to cooling and cleaning operations 28 with subsequent production of steam 32 and removal of produced water at 34. Common practice in the prior art is to employ the use of a water gas shift reaction (WGS) on the clean syngas 30 to condition the hydrogen to carbon dioxide ratio to near 2.0:1 for optimum conditions for the Fischer-Tropsch unit 40. It is not preferred in this process to include a WGS reaction as all the carbon, primarily as CO is retained and used to maximize production of synthesis liquids product. The process may optionally use the supplemental addition of hydrogen 42 to maximize the conversion to syndiesel. The raw syngas may be further treated, as is well known to those skilled in the art, in various steps of scrubbing units and guard units to remove ammonia and sulfur compounds to create a relatively pure clean syngas 30 suitable for use in a Fischer- Tropsch unit. A carbon dioxide removal unit (not shown) may optionally be included in the clean syngas stream 30 to reduce the inert load and maximize the carbon monoxide concentration to the Fischer-Tropsch unit 40. The syngas is then transferred to a Fischer-Tropsch reactor 40 to produce the hydrocarbons and water. The so formed hydrocarbons are then passed on to a product upgrader, generally denoted as 50, and commonly including a hydrocarbon cracking stage 52, a product fractionating stage 60 with naphtha being produced at 66 as a fraction, as well as diesel 68 as an additional product. The diesel 68 formulated in this process is commonly known as syndiesel. As an example, this process results in the formulation of 1000 barrels per day (bbl/day) based on 10 to 15 thousand standard cubic feet /day (MSCFD) of natural gas. As is illustrated in the flow diagram, a source of hydrogen 74 is to be supplemented to the hydrocarbon cracking unit 52 denoted as streams 54. Further, energy 32 from the syngas generator 24, typically in the form of steam, may be used to generate power and this is equally true of the Fischer-Tropsch reactor 40 creating energy 46.
[0035] Table 1 establishes a comparison between FT diesel and conventional petroleum based diesel.
TABLE 1

[0036] As a further benefit, known to those skilled in the art, the process as described by Figure 1 and all configurations of the current disclosure, the addition of a further side stripper column (not shown) off the fractionation in stage 60 may be included to produce a new fraction of about 25% of the volume of the syndiesel fuel (200 to 300 barrels per day (bbl/day)), referred to as FT-jet fuel. Table 2 describes a typical characteristic of FT jet fuel.
TABLE 2

[0063] As is evident from the Table, the natural gas feed to the GTL circuit has a total diesel production barrels per day (bpd) of 996.5. Cases 1 though 4 vary the feed composition to the GTL circuit with very pronounced results. In the instance of Case 4 where the feed is straight butane, the result is 3093 bpd of syndiesel which, represents approximately a 300% increase from the use of conventional natural gas with all of the byproducts present. Case 3 indicates straight propane as an option with an indicated total syndiesel product of 2355 bpd. Case 2 demonstrates a mix between propane and butane as the feedstock, also illustrating a significant increase in product yield showing 2748 bpd of syndiesel relative to the use of natural gas only. It will be appreciated that in the instances of Cases 1 through 4, these are demonstrative of the increase in volume of the syndiesel produced when used in combination with the typical natural gas composition under column Pipeline Natural Gas.
[0064] Clearly, the methodology facilitates an increased yield of synthetic fuel production by use of natural gas byproducts without natural gas. This advantageously provides process flexibility and definition economics.

- extracting byproduct fractions consisting of propane and/or butane from said natural gas; and 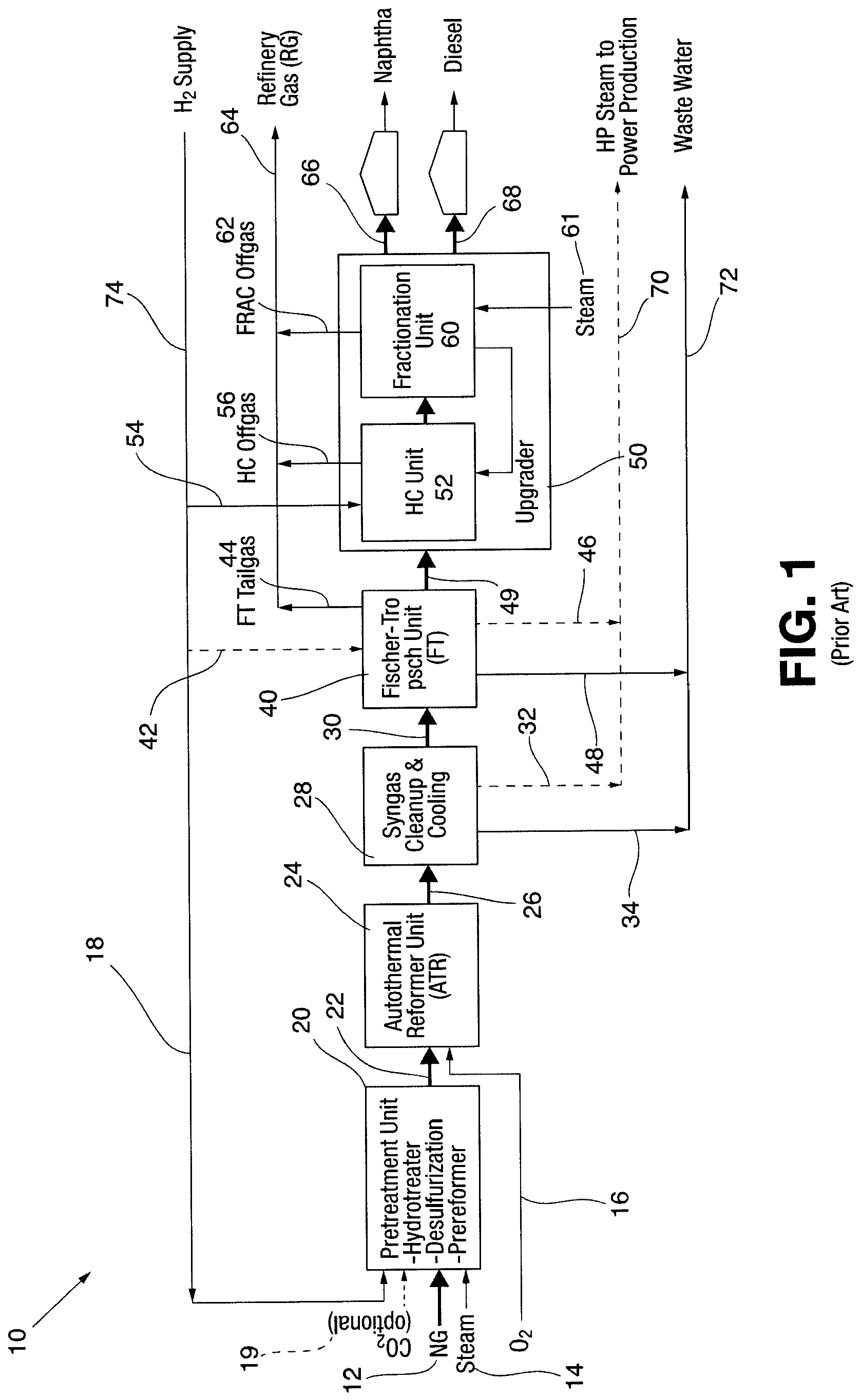 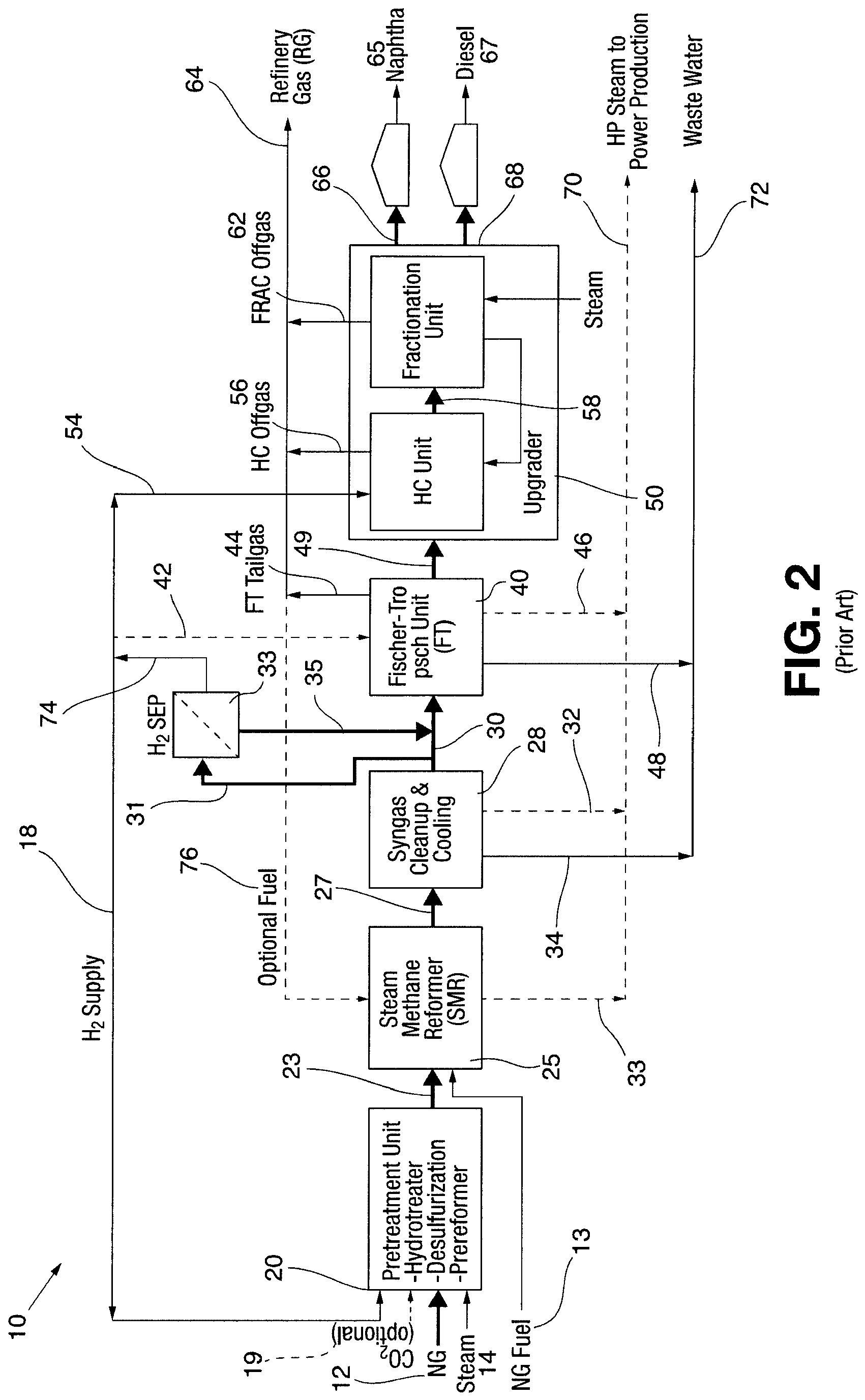 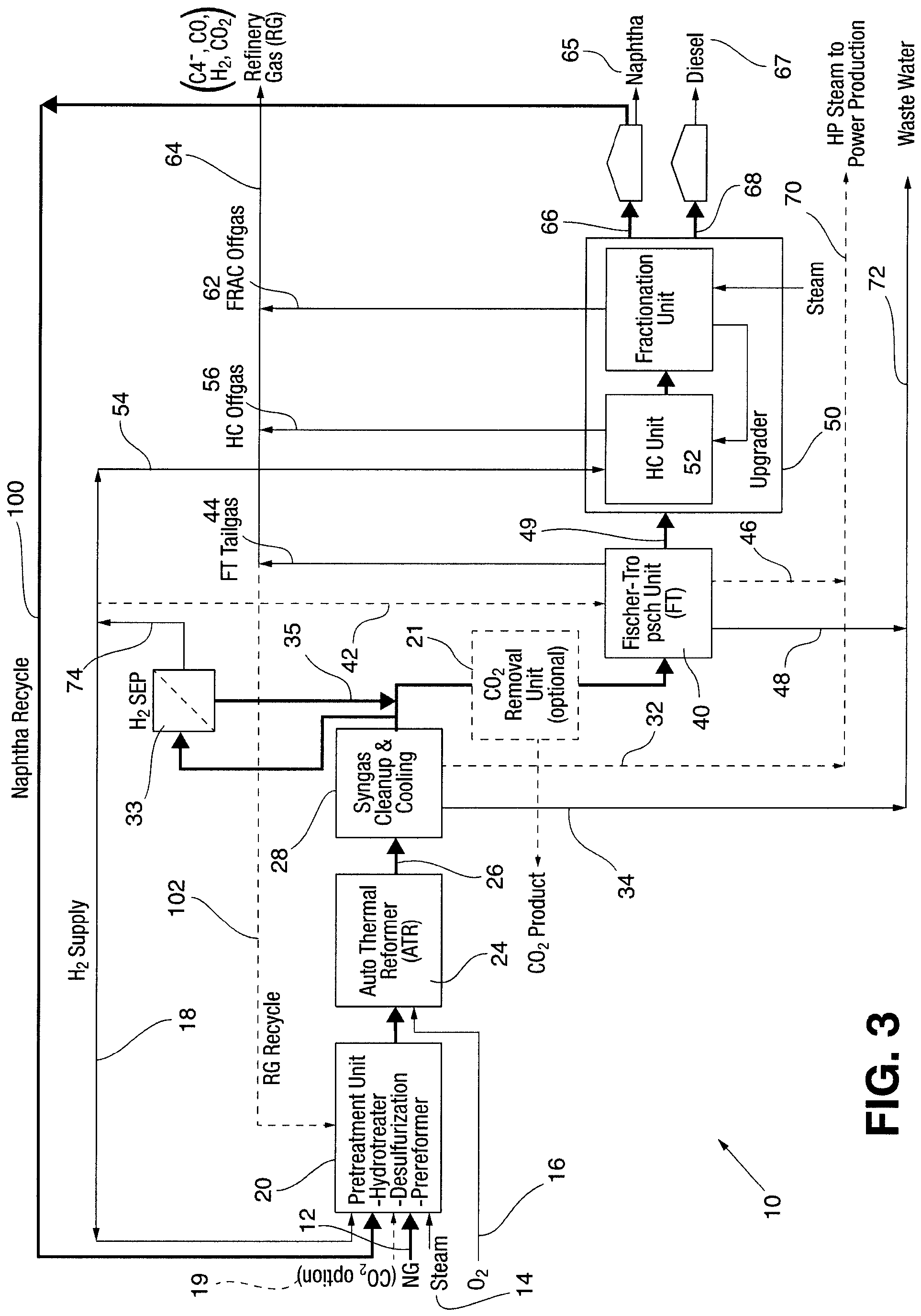 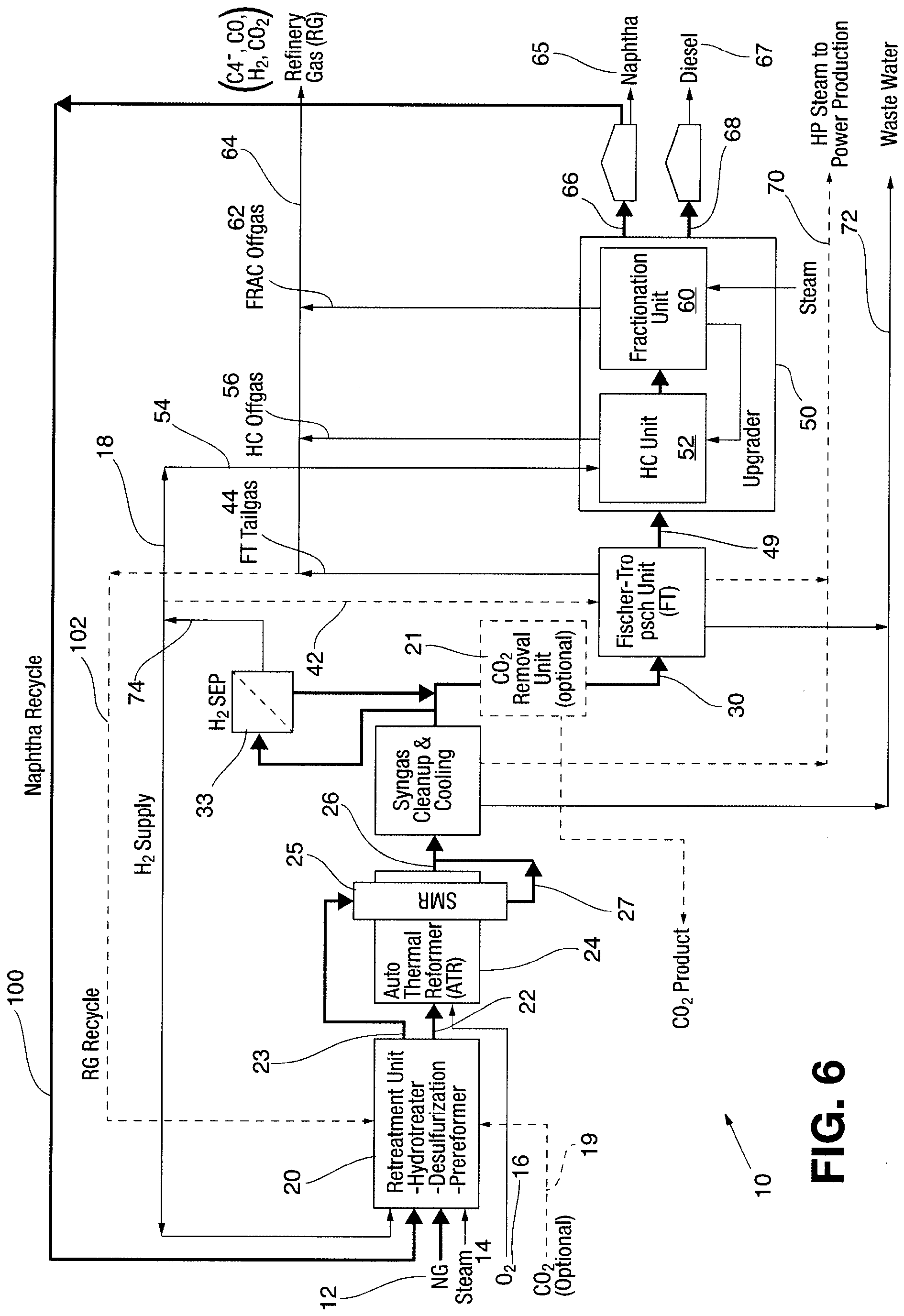 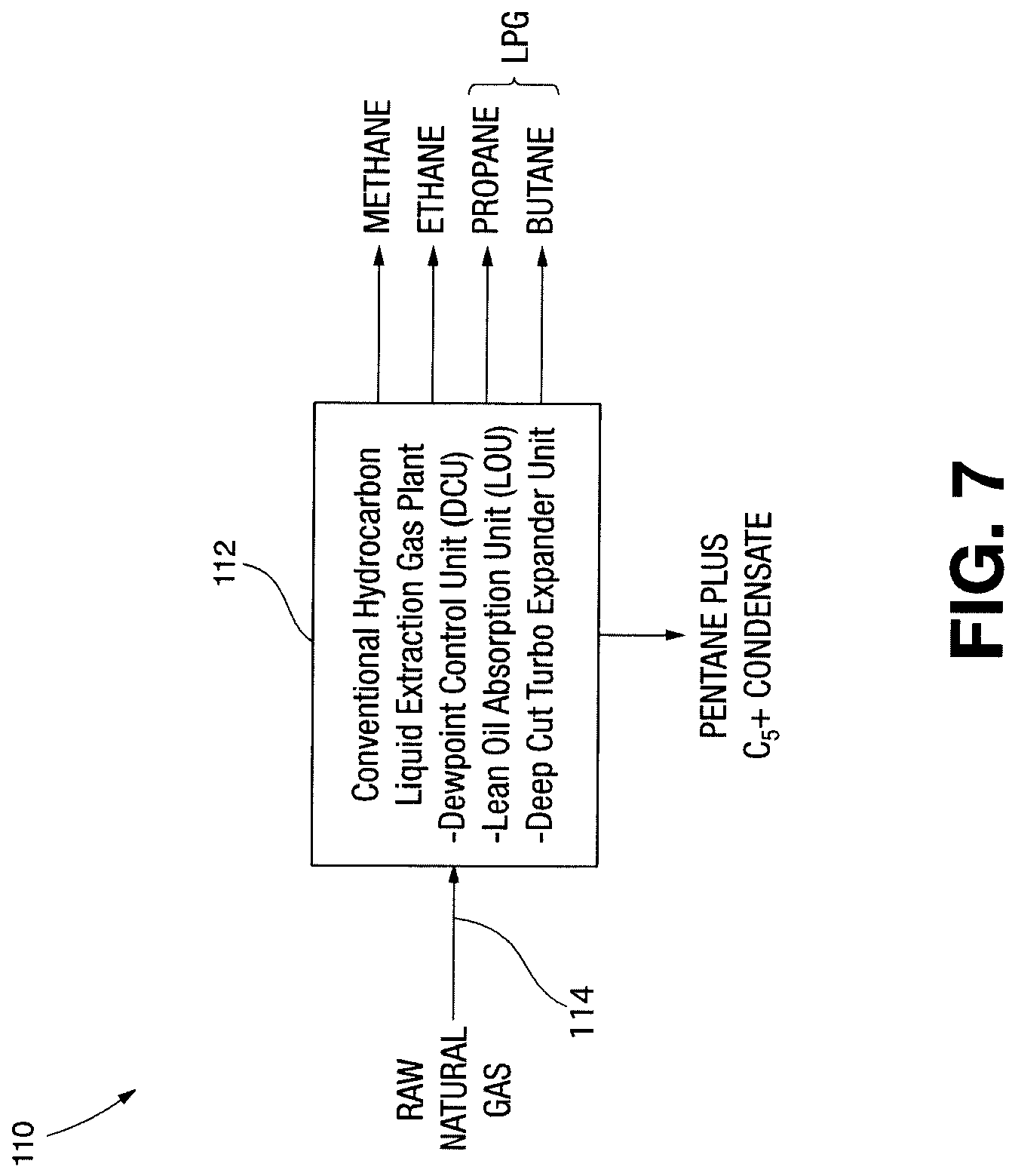 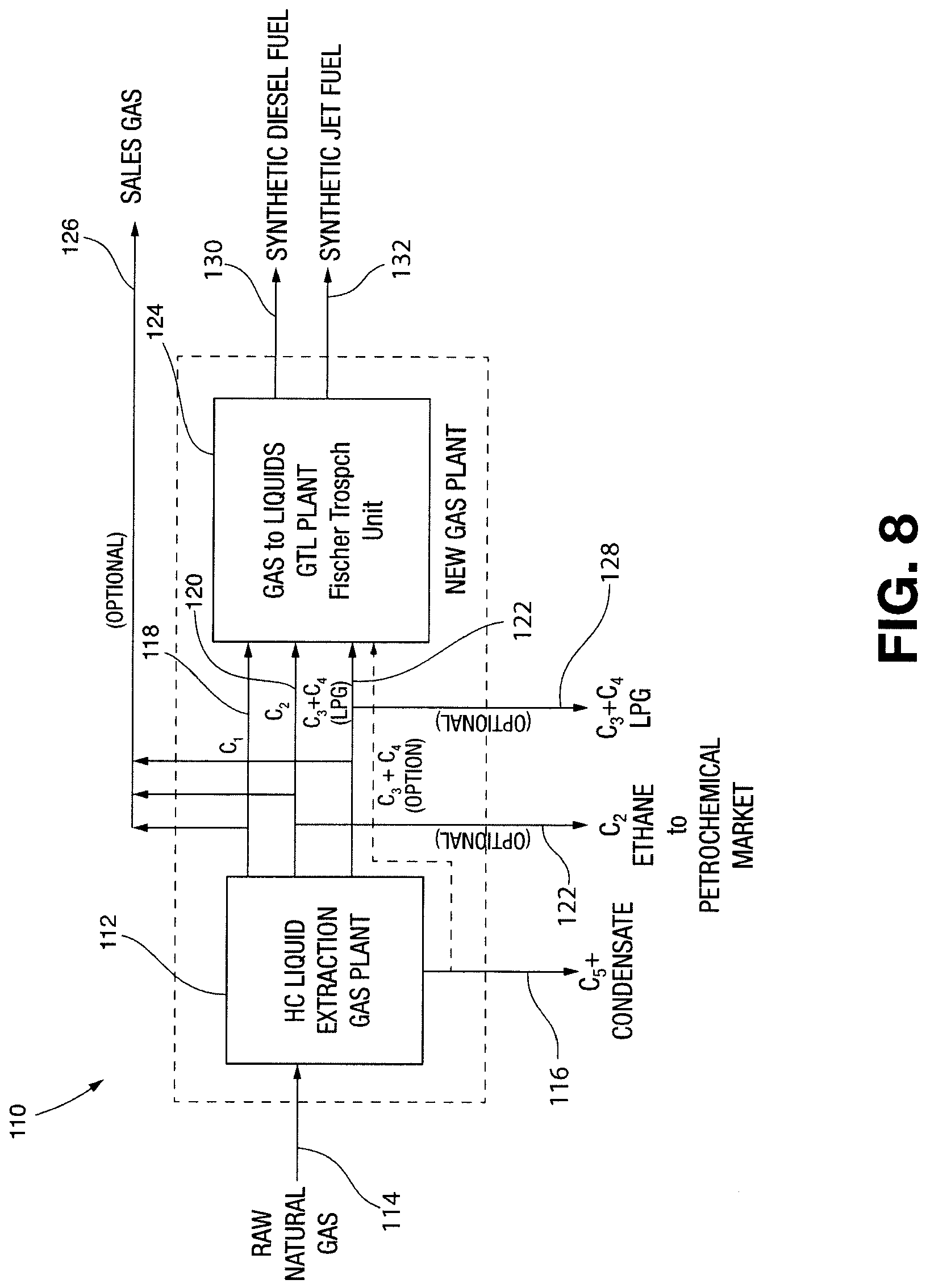